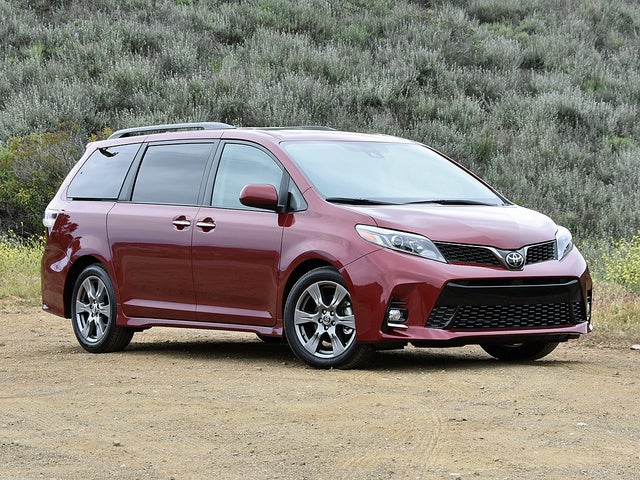 The third-generation Toyota Sienna showed up in 2011; it has since undergone several refreshes. The most recent of these occurred in 2018, so the 2019 Sienna sees no notable changes.

As far as styling, Toyota has done a great job of keeping the Sienna looking fresh. Despite being one of the oldest minivans on the market, the Sienna includes changes that are crisp and in line with Toyota styling; the interior is full of contemporary, pleasing shapes. The interfaces aren’t the most impressive, but they are reasonably competitive and tick all the boxes.

Like all minivans, the Sienna makes the most of a tall, boxy shape and a car-like seating position. There’s seating for as many as 8 people, with the second row consisting of either captain’s chairs and an optional middle insert or a bench. While the second-row seats must be tipped up or removed manually to make room for additional cargo, the third-row seats are 60/40 split-folding, and can be stowed neatly into a recessed cargo area for a flat load floor. With both rear rows folded, the Sienna boasts an impressive 150 cubic feet of cargo capacity.

Toyota ditched the anemic four-cylinder model some time ago, so the only engine option for the Sienna continues to be a 3.5-liter V6 with 296 horsepower and 263 pound-feet of torque; it sends power to the front wheels through an 8-speed automatic transmission. Certain trims can be equipped with efficient all-wheel drive (AWD) with active torque control, a segment exclusive. Opt for the Towing Prep Package and you’ll get an engine oil cooler, heavy-duty radiator, fan, and the ability to pull 3,500 pounds. The Sienna is rated at 19 miles per gallon city, 27 highway and 22 combined with front-wheel drive (FWD), or 18, 24, and 20 with the optional AWD setup.

From there, Toyota allows you to scale the trim ladder and add packages that include items like captain’s chairs, keyless access and start, a power liftgate, LED daytime-running lights, uprated wheels, leather upholstery, navigation, 4G LTE streaming, premium JBL audio, and a dual-pane moonroof. You can even add a rear-seat entertainment center with a 16.4-inch split-screen display, wireless headphones, a Blu-ray player. The Sienna also offers a system called Driver Easy Speak, which uses an overhead microphone to amplify the driver’s voice across the entire car. In a nod to shoppers focused on the mobility of their passengers, LE and XLE grades are also available with Auto Access seat, which incorporates a bucket seat in the second row that rotates 90 degrees, extends from the vehicle, and lowers to an appropriate height for ingress and egress.

As a family vehicle, the Sienna is well-equipped to avoid accidents. A reversing camera and the entire Toyota Safety Sense P suite come standard. The latter packages lane-departure alert with steering assist, adaptive cruise control, pre-collision with pedestrian detection and brake assist, and automatic high beams. Optional safety features include a 360-degree and birds-eye camera system, reversing sensors, blind-spot monitoring, and Safety Connect, a telematics system that allows the car to summon emergency assistance and roadside assistance. It also gives drivers the ability to track the vehicle at any time, in case of theft. The Sienna was tested by the Insurance Institute for Highway Safety (IIHS) as recently as 2018. While most crash scores and frontal crash prevention ratings were perfect, it achieved an average rating for driver’s side small overlap and a marginal rating for the passenger’s side.

Despite being the second-oldest minivan on the market, there’s much to recommend the Sienna, from a crisp design to thoughtful packaging, competent features, and safety technology. Plus, it’s the only minivan to offer AWD.

GuruRQXBB Great - must have auto access seat, navigation and DVD

Have you driven a 2019 Toyota Sienna?
Rank This Car

Do The Fair, Good, And Great Prices Shown On "https://www.cargurus.com/Cars...