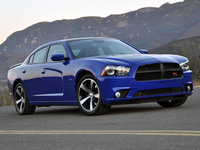 The traditional hydraulic rack-and-pinion steering is alive in the driver’s hands, thrumming and vibrating to communicate what’s happening at the front tire’s contact patches. 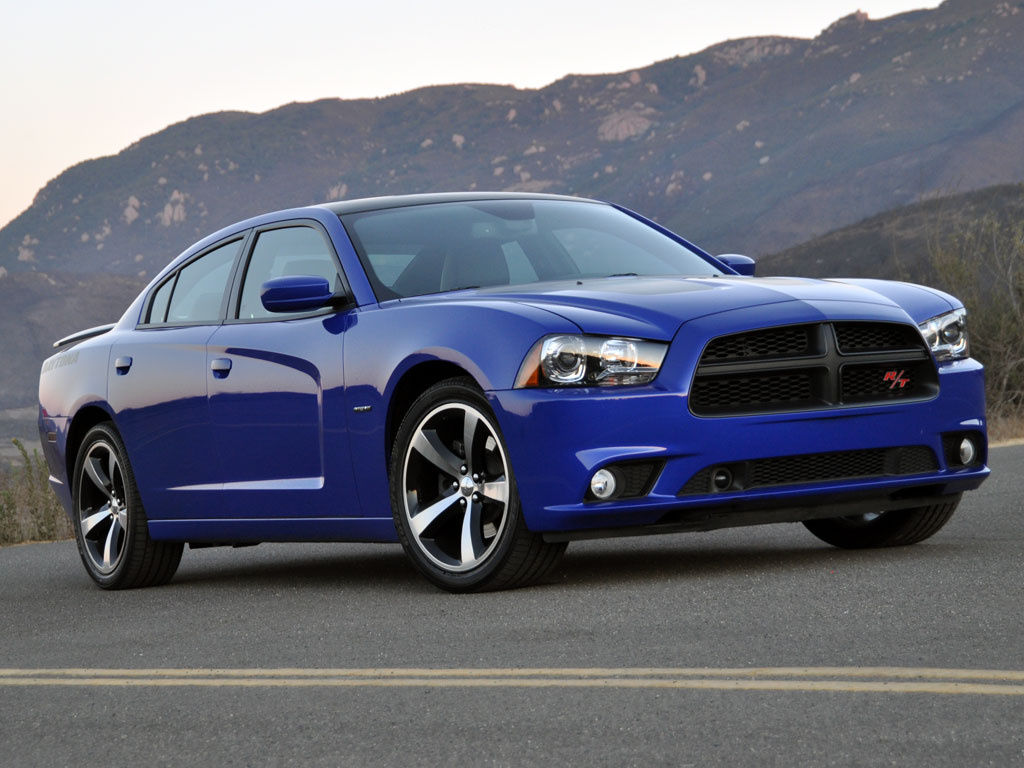 Dodge has pitched the Charger at both men and women using advertisements designed to provoke primal responses around themes related to empowerment, control, escape and even survival, but there’s no question that this is a car for dudes. From its aggressive retro-muscle styling to the H-E-M-I lettering stamped onto the engine’s cylinder heads, the 2013 Dodge Charger is a manly sedan if ever one existed. Where the Charger departs from stereotypes is that it’s not just for middle-aged blue-collar guys trying to relive their glory days. Underneath the sheetmetal, this car is unexpectedly sophisticated. In fact, there’s really only one significant problem with the Dodge Charger, as we will discover in the review that follows. 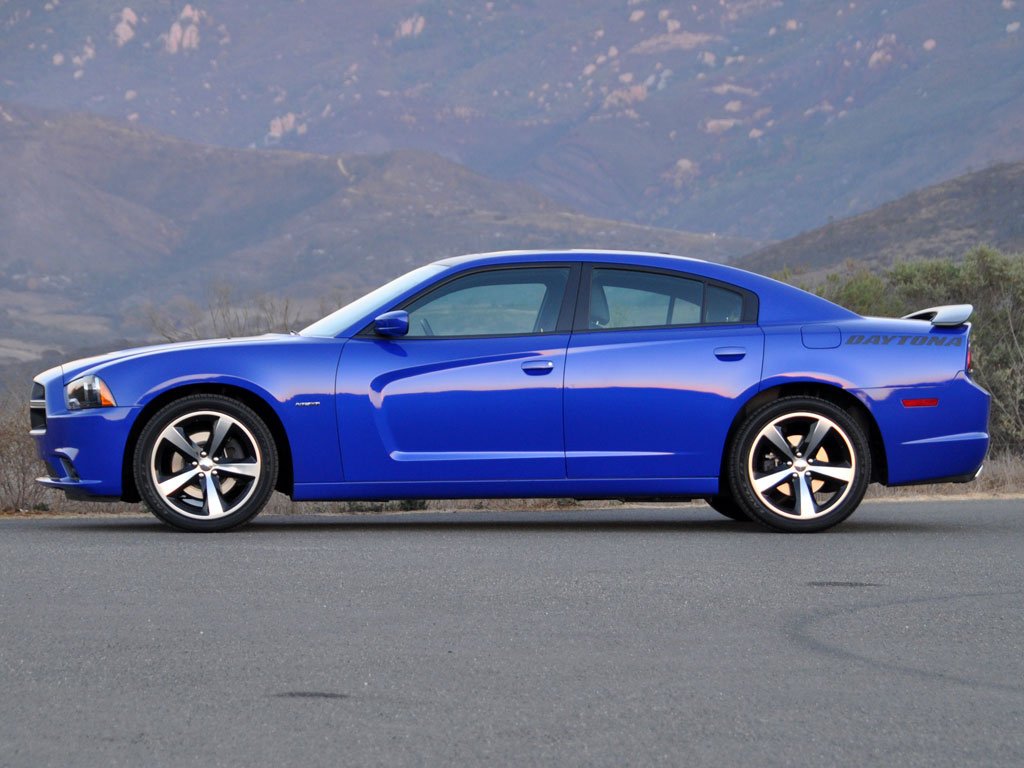 Styling is what draws people to the Dodge Charger, a full-size family sedan with a menacing look and retro-cool styling cues. Four versions are for sale, and the one you pick will depend on the engine you want.

The Charger SE and SXT trims are equipped with a V6 engine, the Charger R/T has a Hemi V8, and the high-performance Charger SRT8 has an even bigger Hemi V8 plus a long list of mechanical upgrades designed to extract maximum acceleration, handling and braking from the car. Prices range from $27,290 to $47,445, including a $995 destination charge.

To set this version of the Charger apart from others, it gets matte-black styling details, including its grille, hood scoop graphics, roof and rear pedestal spoiler. Heritage-style Daytona stripes decorate both rear quarter panels, and the Daytona Edition is also equipped with LED racetrack taillights and a rear diffuser panel between its quad tailpipes.

Styling is what gets Charger buyers into the showroom, and the Daytona Edition doesn’t disappoint. While it’s not my favorite version of this car, its limited-production status and unique Daytona Blue paint certainly must be draws for fans of the model. 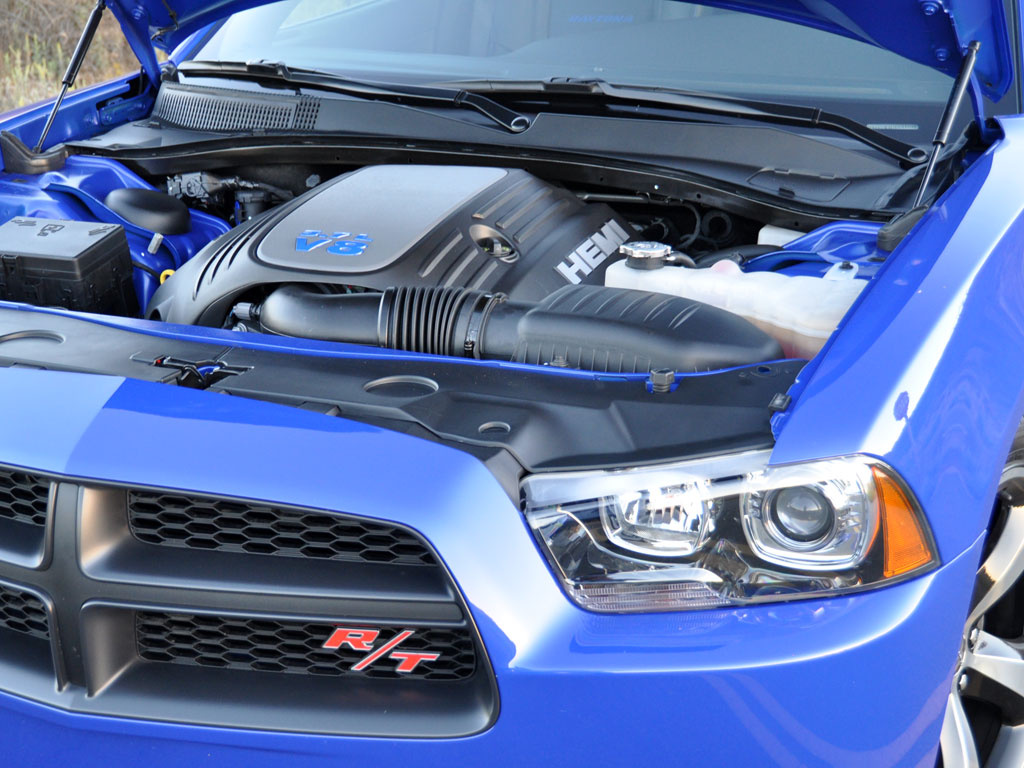 Charger R/T trims can also be optioned with AWD and contain a 5.7-liter V8 rated to make 370 hp at 5,250 rpm and 395 lb-ft of torque at 4,200 rpm. Fuel Saver technology is designed to operate the engine on 4 of its 8 cylinders under low-load driving conditions in order to conserve fuel.

The first thing I noticed about the Charger Daytona is that the throttle is very sensitive right off the line, making the car leap forward if you’re not careful. Until you acclimate to this, your driving style simply serves to confirm whatever stereotypes other motorists might have about a Charger owner. Stomp on the gas, and the Daytona sounds terrific as it rushes effortlessly to speed, the transmission delivering authoritative upshifts.

According to Dodge, the Charger Daytona accelerates to 60 mph in just over 5 seconds and covers the quarter-mile in less than 14 seconds. That’s fast for a car weighing more than 4,250 pounds, and the good news is that the Charger Daytona isn’t good only in a straight line. It can handle, too.

Plenty of the credit goes to the enormous 20-inch wheels and, mounted to my test car, the sticky Goodyear Eagle F1 Supercar performance tires. Grip is extraordinary, and the performance-tuned suspension nearly eliminates body roll, squat and dive. The traditional hydraulic rack-and-pinion steering is alive in the driver’s hands, thrumming and vibrating to communicate what’s happening at the front tire’s contact patches. During a long, twisty descent from 1,845 feet in elevation to sea level, the Charger Daytona’s upgraded brakes proved fade free on a hot testing day.

As accomplished as the Charger Daytona’s hardware might be, this is a big car, and it is not easy to drive fast on narrow, twisting mountain roads with blind corners and warning signs advising speeds of no more than 15 mph. The car’s bus-size steering wheel certainly doesn’t help in this regard. Rather, the Charger Daytona is more at home on higher-speed straights and sweeping turns, recalling the racetrack that is its namesake.

Around town, once you get used to the jumpy accelerator pedal, the Charger Daytona is almost docile. The stout brakes grab a little bit just as the car rolls to a stop, and the stiff suspension jiggles man boobs enough to counteract the Daytona’s testosterone-replacement side effects, but those giant wheels and tires steamroll over minor cracks and bumps in the pavement like they don’t exist.

Additionally, the Charger does a surprisingly good job of isolating occupants from noise, vibration and harshness at lower speeds, proving unexpectedly quiet unless you’re accelerating hard. Visibility is better than might be expected, too, and the car is rather nimble in parking lots thanks in part to a tight turning radius.

Out on the highway, wind noise is evident at speeds above 60 mph, but this car effortlessly cruises at 80, occupants comfortable and well isolated from most sources of road noise. 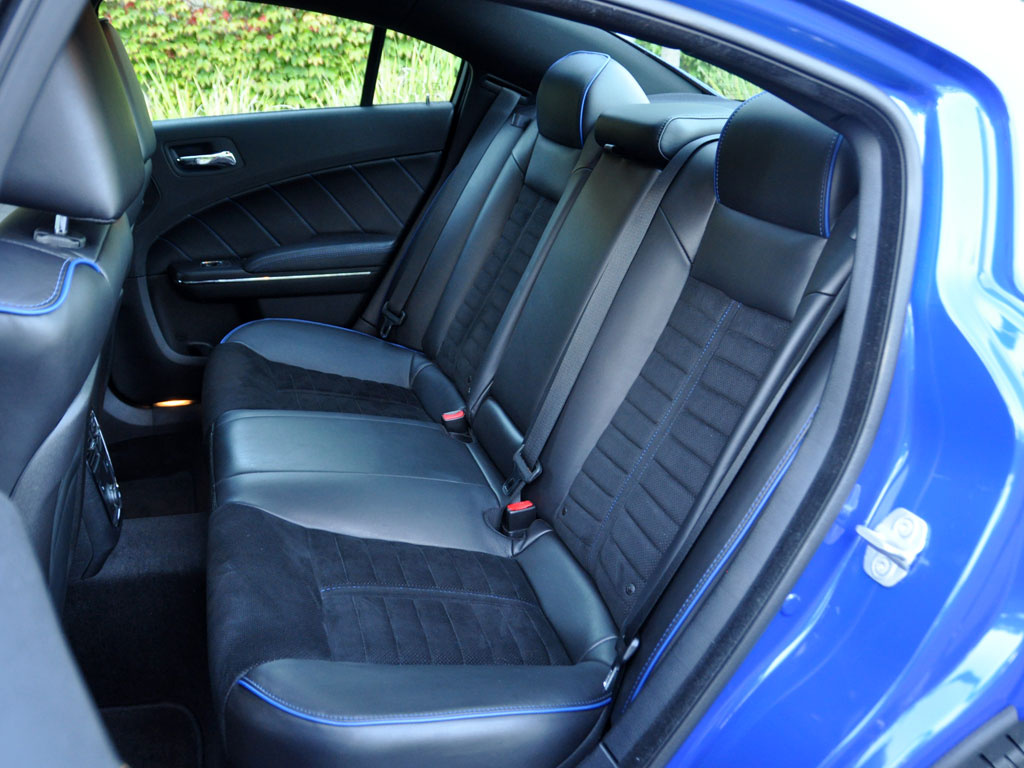 Step into the Charger’s driver’s seat (which is easy because this is a tall car with seats that sit high off the floor), and you’ll find yourself inside a full-size sedan with plenty of space for people and cargo. There’s no shortage of storage space, either.

My Charger Daytona had performance-bolstered seats wrapped in premium Nappa leather with special Daytona Blue stitching and embroidery. Aside from these chairs, the special Daytona badge on the dashboard and aluminum pedal covers, this version of the Charger is similar to others.

Dodge ought to consider making the bolsters for the performance seats adjustable. I’m not the smallest guy in the world, but I still felt like they were lazy in their embrace. On the other hand, in a nation with skyrocketing obesity rates, maybe the Charger’s wide seats are actually a positive selling point.

The rear seat is roomy and comfortable, though the Charger’s low-slung roofline could cause problems for taller people who forget to duck a little bit when getting in and out. Rear leg and foot room is generous, and my test car had heated rear seats. The hard plastic front seatback trim, however, could prove painful if the people up front prefer a more reclined seating position.

The Charger’s trunk measures 16.5 cubic feet, on par with most family sedans, and includes a handy hook for plastic grocery sacks that is designed to hold up to 50 pounds. Trunk room can be expanded using the 60/40-split folding rear seatback. Note that the Beats Audio subwoofer chews up some of the space in models that have the option. 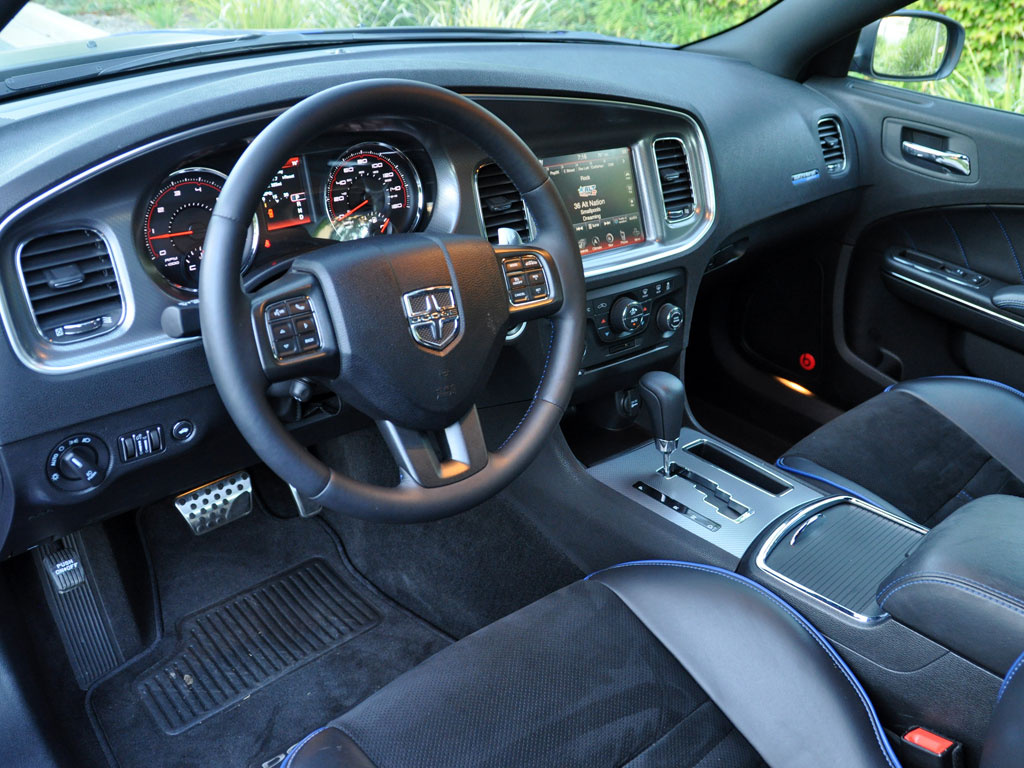 Before you write the Charger off as a meathead muscle car lacking sophistication, consider the level of technology offered in what might at first glance appear to be a vehicular throwback to another era.

Personally, having used most of the infotainment systems installed in today’s cars, I think Chrysler’s Uconnect 8.4 touchscreen ought to serve as the industry benchmark from size, graphics, responsiveness and ease-of-use perspectives. It is very easy to pair a phone to the system, to find what you want using the menus and to execute commands.

Additionally, the Charger is offered with a Driver Confidence Package that includes a reversing camera, rear parking assist sensors, and rain-sensing wipers. None of these items is terribly groundbreaking, but this option also supplies automatic high-beam headlights, a Rear Cross-Path Detection system and a Blind Spot Detection system.

Beyond this, the Charger can be outfitted with an Adaptive Cruise Control system with Forward Collision Warning. While driving hard on the mountain roads where I conduct a portion of my vehicle testing, the Forward Collision Warning system delivered alerts on three different occasions, but I generally find it selective about when it decides a threat exists.

One thing is for sure: It grabs your attention with a loud alert and provides a visual explanation of the noise you’re hearing right on the information display between the gauges. For the driver, there is no question as to what is beeping and why. 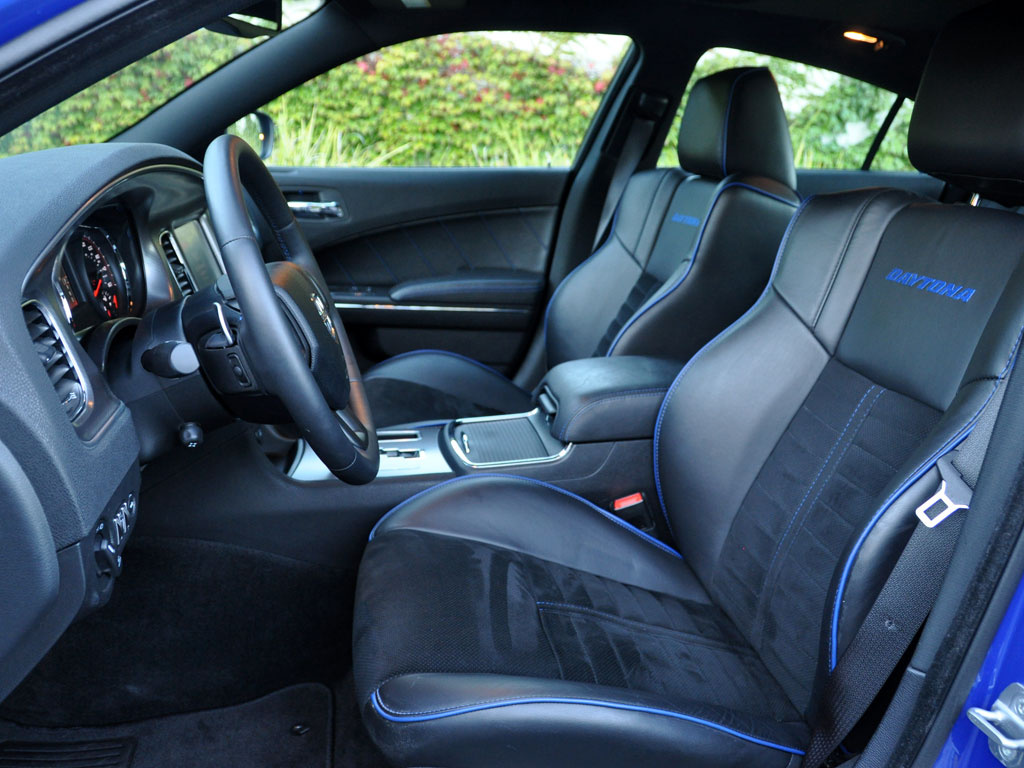 In the event that the Charger’s available safety features aren’t able to help prevent a collision, know that this car gets a 5-star overall crash-test rating from the National Highway Traffic Safety Administration (NHTSA) as well as a Top Safety Pick rating from the Insurance Institute for Highway Safety (IIHS).

Also know, though, that the Charger has not been tested in the new small overlap frontal-impact test conducted by the IIHS. This new assessment is designed to measure a car’s ability to protect occupants in an impact taken on the front left corner of the vehicle, such as when hitting a pole, a tree or oncoming traffic.

One thing you can’t get on a Charger is the latest Uconnect Access technology, which includes the ability to summon a 9-1-1 emergency operator with the touch of a button and provides hands-free text-messaging capability. Maybe next year, eh, Dodge? 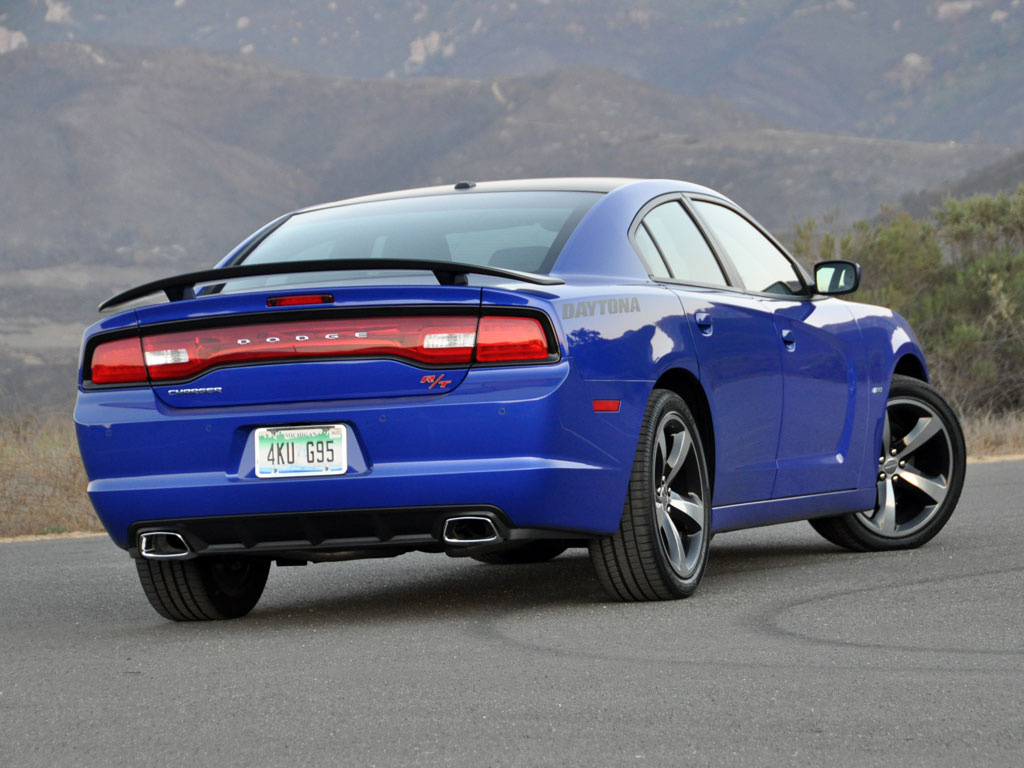 Nobody buys a Dodge Charger with a 5.7-liter Hemi V8 and expects to get great gas mileage. That said, the EPA estimates that the Charger Daytona will return 16 mpg in the city, 25 mpg on the highway and 19 mpg in combined driving. I averaged 17.5 mpg. Buy this car and you can assume that you are going to spend lots of money on gas.

You might also spend lots of time at the Dodge dealer’s repair shop. The good news is that the Charger comes with a 5-year/100,000-mile powertrain warranty. The bad news is that since the Charger’s last significant revamp, back in 2011, reliability has taken a turn for the worse, according to Consumer Reports. That publication gives the Charger its lowest possible reliability prediction.

Nevertheless, people who buy a Charger love the car. In the J.D. Power 2013 Automotive Performance, Execution and Layout (APEAL) Study, the Charger led its class, earning an award for its overall appeal.

The deals on this car are appealing, too. Keep your hands out of the options cookie jar, and the sticker price will reflect good value. Plus, as this review is written, Dodge is offering rebates of $2,500 or low-interest financing for 5 years with no payments due for the first 3 months.

Dodge is also supporting the Charger with favorable lease payments, despite the car’s merely average ability to retain its value, according to ALG. Given that unfavorable reliability rating, leasing is probably the smart way to go. That way, if the car really does prove to be troublesome, it’s ultimately Dodge’s problem, not yours.

Hotshoe17 We have one and love everything about it. A month ago the Instrument Cluster went Blank. The Dealer here in Franklin, Tennessee cannot seem to get it fixed. They have had it for a month. The Dodge Help line does not have any answers for us either. We loved the Car and want it back, just can't get it when the Dealership can't fix it.

Users ranked 2013 Dodge Charger against other cars which they drove/owned. Each ranking was based on 9 categories. Here is the summary of top rankings.

Have you driven a 2013 Dodge Charger?
Rank This Car

Grinding When Turning And Braking But Its Not Rotors

Ok, i am NO mechanic but im also not someone who needs to have someone do my pads, rotors, oil etc.. 7 out of 10 repairs i can usually handle myself but i cant for the life of me figure what this i...

have a 2013 dodge charger. when driving and turning right makes grinding noise but stops when turning left and breaking

do you have information on rebuilt moter

Buy A Car And Financing