The 2011 Subaru Legacy has the performance and flexibility to be what you need and to do it well, with diverse engine options and trim levels that mean you can make what you want out of the Legacy.

An underpowered base engine, a sloppy six-speed manual transmission, and the lack of a continuously variable transmission option for the higher trims all disappoint in the 2011 Legacy.

It’ll take very little to really shore up the Legacy. While there are options to get around its disappointing six-speed manual, you shouldn’t have to avoid a transmission option when buying a car. A five-speed automatic as the only option for the 3.6 trims, even with paddle shifters, is simply unacceptable as well, but with that in mind, there are still plenty of pleasing configurations for the Subaru Legacy, which makes it one of the most versatile values in its class.

The 2011 Subaru Legacy loses its 2.5GT Premium trim level, but is otherwise unchanged after a major redesign last year. Three engines spread across a multitude of trim levels offer a wealth of configurations, providing plenty of options for your particular desired setup. Thanks to the loss of the 2.5GT Premium trim, the 2.5GT Limited stands as the sole turbocharged offering for the Legacy in 2011, and has been upgraded as such. That trim now comes with a standard moonroof as well as interior cosmetic upgrades like leather upholstery, faux carbon-fiber trim, and aluminum pedals.

There are changes affecting the whole lineup as well, like standard satellite radio added to the audio package, and new fold-in side mirrors. The options list has changed as well, mostly with the addition of several available trim and molding pieces. 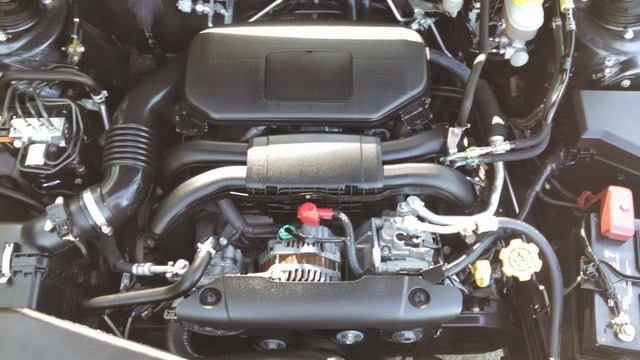 Legacy 2.5i trims are powered by a naturally aspirated 2.5-liter four-cylinder engine in a boxer configuration, while the 2.5GT Limited gets a turbocharged version of the same engine. In its non-turbo form, the 2.5 offers a matching 170 hp as well as lb-ft of torque, showing up at 5,600 and 4,000 rpm, respectively. With the option of a six-speed manual or continuously variable transmission (CVT), you can expect an impressive 19/27 or 23/31 mpg. The benefits of the CVT go far beyond fuel economy, as the six-speed manual is sloppy and imprecise at best. Clutch feel has also been criticized as too vague, seriously robbing the 2.5 of fun, a characteristic it was short on to begin with. It’s not that the 2.5 is underpowered in non-turbo form. City driving provides no issues, but highway speeds highlight its weakness as it starts to lack power when you look for the reserve.

Testers have found that the clutch for the six-speed manual when attached to the turbocharged version of the 2.5 was much improved, and the optional short-throw shifter seems to greatly increase precision in gear selection as well. With 265 hp at 5,600 rpm and 258 lb-ft of torque way down at 2,000, there will be no shortage of power here, regardless of where you’re looking. And at 18/25 mpg, it’s not a big penalty to jump up to the turbo from 2.5i trims.

For more reserved power, the 3.6-liter boxer-six engine offers 256 hp at 6,000 rpm with 247 lb-ft of torque at 4,400 rpm. It gets the same 18/25 rating as the turbo 2.5, but here uses a five-speed automatic that just feels archaic when compared to the other transmission options in the lineup. Power won’t surprise you here, but it’s a very refined engine and won’t disappoint in city or highway driving. Paddle shifters provide a bit of fun in manual mode, but you won’t be capable of the kind of hooligan antics that the turbo 2.5 just begs you to undertake.

It’s funny to say, but the Legacy has become a bit portly over the years. Non-GT trims simply feel a bit heavy, especially in corners, but provide a comfortable and composed ride that makes longer trips plenty doable. This is partly due to the softer suspension of the non-GTs, but also thanks to the 16- and 17-inch wheels that come with the 2.5i and 3.6 trims. The 2.5GT gets a firmer, lowered sport suspension and 18-inch wheels that combat body lean and increase turning confidence, but do result in magnified bump reverberation.

What this means is that you can choose to have a luxury sedan good for long-haul cruising or a juiced-up sport sedan that begs you to do some canyon carving through sharp turns and long straightaways. Subaru is one of the few companies to do this well, and the Legacy is one of the best examples. Regardless of trim, your Subaru will come with symmetrical all-wheel drive, traction and vehicle dynamics control, speed-variable power steering, and a four-wheel independent suspension.

Sadly, there isn’t much to distinguish the lower Legacy trims from the more upscale examples, save for standard leather upholstery. That said, even the base 2.5i Legacy trim manages to avoid looking cheap, despite the liberal use of hard plastic surfaces. Some of the interior trim options certainly dress up the joint a bit, allowing you to construct a Legacy that looks much more luxurious than the class would indicate.

Controls are very well placed, easy to both see and reach, with the exception of a temperature, fuel economy, and clock gauge that is located centrally above the dash. It’s hard to see, seemingly regardless of position or lighting. The navigation system deserves special note as it manages to avoid over-complication, a trap too many fall into.

With 2010’s redesign, the Legacy gained a little size outside and a lot of space inside, especially in the back. While there is a wealth of room for legs and heads up front, it’s surprising to find the same in the rear, where even 6-foot adults can enter, exit, and sit with comfortable ease, even for longer trips. Simply put, you’ll find it difficult to locate another vehicle in the class to match the Legacy's rear-seat room.

Subaru’s symmetrical AWD system coupled with its four-wheel independent suspension has long been touted as the primary safety feature of any Subaru. Here is no different, although as these features have become more commonplace, we’ve seen less emphasis being placed on them. Still, there are many safety features to complement both, including four-wheel antilock disc brakes, traction and vehicle dynamics control, stability control, daytime running lights, and six standard airbags.

Still, the Legacy has been plagued with recalls since last years’ redesign, although most have affected only 2010 models. One recall has been announced for the 2011, however, regarding a missing lubrication hole for the six-speed manual transmission. It went into effect back in August and involved 809 vehicles, mostly 2010 models.

2011 NHTSA ratings for the Legacy have not yet been released due to the new testing specifications and procedures they’ve implemented this year, but as the Legacy has changed only slightly from 2010, the five-star ratings earned then can apply to the 2011 model. It should be noted, however, that the NHTSA’s new procedures have been described by the company as involving more stringent benchmarks, and therefore five-star ratings should not be assumed to cross over.

Owners are very pleased with the interior space of the Legacy, as well as the performance from the turbo 2.5 engine and the 3.6. That said, the six-speed manual has been a huge disappointment, saved only by the short-throw-shifter option for the 2.5GT. The new design of the Legacy has been divisive amongst owners, but all seem to look for more power from the 2.5i engine. Many have also asked to see the CVT adopted across the model lineup, but Subaru has made no promises as of yet.

Users ranked 2011 Subaru Legacy against other cars which they drove/owned. Each ranking was based on 9 categories. Here is the summary of top rankings.

Have you driven a 2011 Subaru Legacy?
Rank This Car

tbeairsto1 asked a 2011 Subaru Legacy 2.5i Maintenance & Repair question about a year ago

Monica asked a 2011 Subaru Legacy 2.5i Maintenance & Repair question about a year ago

Major asked a 2011 Subaru Legacy 2.5i Maintenance & Repair question about a year ago

2011 Legacy Is Still Overheating After Change Of The Thermostat. The Top Hose Is Hot, Bottom Is Definitely Cooler! A/C Is Cold Then Not So Much I Released Some Pressure From The Radiator Cap And It...

GuruBPPYN asked a 2011 Subaru Legacy 2.5i Premium Maintenance & Repair question about a year ago

Can Someone Help With A Misfire?

49 views with 3 answers (last answer about a year ago)

I got a 2011 Subaru Legacy 2.5 that will start and run for a couple second and die