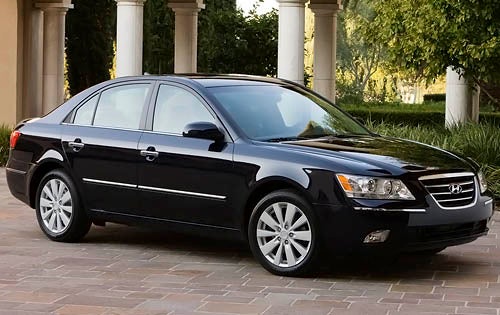 Hyundai emphasizes the Sonata's fuel efficiency for 2010, but this midsize sedan has much more to offer potential buyers, including a spacious cabin, a long list of standard features, and a top safety rating.

Many find the Sonata's exterior design unexciting, and many would like to see more responsive steering and tighter handling.

Despite an undeserved reputation as a maker of cheaply made vehicles, Hyundai continues to improve its midsize Sonata sedan, to the point where it competes ably in many areas with competitive sedans from other automakers, including Toyota and Honda. The Sonata's roomy, high-end interior should please both single drivers and families, and top-notch safety features ensure passenger protection. Add in a lower price tag, and the Sonata has a lot to offer budget-minded yet discerning buyers.

Hyundai makes only minor updates to the 2010 Sonata midsize sedan, in anticipation of an all-new design reportedly due next year. For 2010, as a response to higher gas prices, Hyundai expands the availability of Sonata trims with the fuel-efficient 2.4-liter four-cylinder engine. The automaker added an assembly plant in Alabama this year to build the four-cylinder engine, which in previous years was shipped in from Korea. The entry-level Sonata GLS trim now comes exclusively with the four-cylinder engine. Hyundai no longer offers an optional V6 for the GLS, as it did in previous years. The mid-level Sonata SE trim and high-end Sonata Limited trim both come with either the four-cylinder as the standard powerplant or an optional 3.3-liter V6 engine.

The Sonata continues to compete in a class dominated by the Toyota Camry and the Honda Accord, and according to many reviewers and owners, the Sonata holds it own against those far more established sedans. Often priced lower than its competitors, the Sonata also offers more standard features and interior room. And while the Sonata lacks the refinement and horsepower of other cars in its class, it offers a viable alternative to owners on a budget who seek a reliable, well-equipped daily commuter.

Hyundai uses its 2.4-liter four-cylinder engine as the standard powerplant across the Sonata lineup. The four-cylinder engine, dubbed the Theta II, produces 175 hp and 168 lb-ft of torque. Equipped with continuously variable valve timing (CVVT) on both its intake and exhaust shafts, the four-cylinder manages fairly decent fuel economy of 22/32 mpg, though some drivers report highway numbers into the mid-30s. The four-cylinder links to a five-speed manual transmission, which comes standard on the entry-level GLS trim, or a five-speed automatic with Shiftronic, which is optional on the GLS and standard equipment on the Sonata SE and Limited trims. The Shiftronic feature enables drivers to upshift and downshift by tapping on the shift knob when its positioned in a second manual-shift gate.

Optional in the SE and Limited trims, the 3.3-liter DOHC V6 generates 249 hp and 229 lb-ft of torque. The V6 also features CVVT on the intake camshaft for optimal power and efficiency. It mates to the five-speed automatic only and posts fuel economy numbers of 19/29 mpg.

Both engines pack an energetic punch for confident highway merging and passing, according to owners and reviewers. However, horsepower for the V6 still falls below performance numbers posted by the Camry and Accord's six-cylinder powerplants (268 hp and 271 hp, respectively), but test drives prove it's powerful enough for the everyday driver who's not too concerned about a sporty driving experience.

The 2010 Sonata sits on a four-wheel independent suspension designed to provide a smooth ride and precise handling. Many owners compare the Sonata's ride to the Honda Accord's, although some call the Sonata's ride soft and floaty, with vague steering and little driver feedback. All Sonatas have engine-speed-sensitive rack-and-pinion steering, with quick-ratio steering and a turning diameter of 35.8 feet, which is better than the turning diameters of the Camry and Accord, as well as the Nissan Altima, Ford Fusion, and Chevy Malibu.

Owners who prefer a firmer ride should opt for the Sonata SE trim, which features a sport-tuned suspension with stiffer front and rear springs, as well as retuned struts and front and rear stabilizer bars. As a result, the SE delivers a more controlled ride, with reduced body roll, when compared to the standard suspension. The base GLS trim rides on 16-inch steel wheels, while the SE and Limited trims come equipped with 17-inch alloy wheels.

The Sonata's seats provide plenty of cushioning as well as back and thigh support for longer trips, and passengers will find good legroom and headroom throughout the cabin, particularly in the rear seats. Covered cubbies in the dash and center console provide adequate room for storage, and Hyundai even offers enlarged cupholders designed to accommodate plus-size mugs and cups.

The Sonata's spacious cabin easily accommodates five passengers, as well as all their gear. Even with the front seats pushed back, taller passengers in the rear will not feel cramped. The large trunk offers 16.3 cubic foot of cargo space (more than the Camry or Accord), and rear seats split 60/40 and fold down to expand cargo space even further.

Hyundai strives to ensure an upscale feel throughout the cabin, with a “flow-through” instrument panel and center console designed to blend together the front and rear seating areas. In addition, the streamlined center stack puts controls within easy reach of the driver, and outlines controls in blue/black lighting to make them easier to locate.

Standard interior features for all Sonata trims include front bucket seats, air conditioning, cruise control, remote keyless entry, and full power features. Both the SE and Limited trims also offer an 8-way power-adjustable driver's seat, which is optional for the base GLS. Hyundai does not offer a power-adjustable passenger seat for any Sonata trim. The SE and Limited trims also come equipped with a leather-wrapped steering wheel and shift knob, and steering-wheel-mounted audio controls. The Limited trim adds leather upholstery and trim, heated front seats, a power tilt-and-slide glass sunroof, an auto-dimming rearview mirror, and dual-zone automatic climate control with an outside temperature display. Optional features include a navigation system with a high-resolution touch-screen display, available only on the Limited trim.

The 2010 Sonata earned a top rating of five stars for front and side impacts from the NHTSA, and a Good rating from the IIHS. Four-channel, four-sensor antilock brakes, paired with electronic brakeforce distribution, which adjusts braking force to the front and rear axles based on the vehicle's load, provide good braking control. Standard safety equipment also includes brake assist, which provides maximum braking force in an emergency situation. Electronic stability control and traction control come standard on all Sonata trims. Dual front, front seat-mounted side-impact, and front and rear side curtain airbags keep passengers safe. A tire pressure monitor comes standard on all trims, while automatic headlights are included on the SE and Limited trims.

Owners find a lot to like about the 2010 Sonata, starting with its affordable price tag and its long list of standard features. Owners also appreciate the Sonata's great fuel economy, its spacious cabin, its expansive trunk, and its overall high-quality fit and finish. In addition, the Sonata's performance gets good marks. The V6 and even the four-cylinder engine move the Sonata along ably around town and at highway speeds, according to owners. The Sonata delivers a smooth ride and good handling, owners say. However, the Sonata's vague steering disappoints some SE owners, who would like to see a bit more sporty performance from the sport-oriented trim. Some find the exterior styling unexciting, and some owners voice concern about the Sonata's resale value.

What's your take on the 2010 Hyundai Sonata?

Users ranked 2010 Hyundai Sonata against other cars which they drove/owned. Each ranking was based on 9 categories. Here is the summary of top rankings.

Have you driven a 2010 Hyundai Sonata?
Rank This Car

I just replaced a battery on my 2010 Hyundai Sonata. I believe the new positive terminal is smaller than the old one because I tightened the clamp as much as possible and the clamp still slides on the...

The ABS/ESC off light are one together on my 2010 sonata, since yesterday morning. Thought it was the usual brake switch recall. Took it to the dealer made the switch. Lights still on. That was yest...

Where Is The Reset Button For The TPMS Light On The Hyundai Sonata?

I have a 2010 Hyundai Sonata fantastic car except.When in Connecticut we get ice or snow to open the door the handle breaks off.I have broken passenger front.Last week broke front drivers side.Do you ...

163 views with 6 answers (last answer about a year ago)