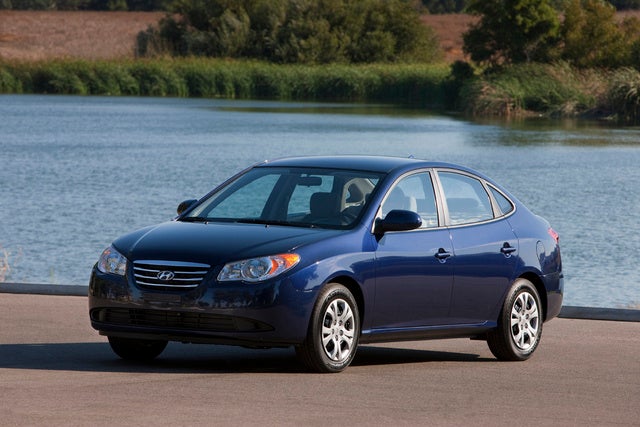 The 2010 Hyundai Elantra offers the high fuel efficiency and low price most want in a compact car and goes beyond expectations with its midsize roominess, stylish cabin, confident handling, generous warranty, and array of available features.

The 2010 Elantra walks the fine line of bland, both in terms of its exterior style and performance - test drive one for yourself to see if it crosses your line.

A few compact four-doors provide a more exhilarating ride and a fuller list of standard features than the 2010 Hyundai Elantra. But you will be hard-pressed to find an economy sedan as spacious on the inside, stable on the road, and easy on the wallet as the Elantra.

Be sure to take your time when poking around the 2010 Hyundai Elantra, because you might miss something with just a quick glance. Beneath the clean and simple exterior lines and lurking behind its low pricetag are a refined cabin, confident ride, spacious interior, outstanding safety features, secure handling, ample cargo room, a reliable build, and a 5-year/60,000-mile bumper-to-bumper warranty (plus a 10-year/100,000-mile powertrain warranty).

Yes, the 2010 Elantra does reside in the four-door economy class, but it defies the minimalist, bare-bones stereotypes of economy cars without screaming about it or pricing itself out of the class altogether.

For 2010 Hyundai adds an entry-level, fuel-efficient Blue trim to the Elantra lineup and increases fuel efficiency in the two other trim levels (GLS and SE) with a few noteworthy drivetrain adjustments, including lower-friction engine components, an “intelligent” alternator management system, updated transmission gear ratios, engine calibration adjustments, and a shift indicator for the manual transmission. All three Elantra trims are powered by a 2-liter, four-cylinder engine. The Blue trim gets a five-speed manual transmission, while the mid-level GLS and top-end SE come standard with a four-speed automatic transmission.

The 2010 Elantra also adds a standard iPod/USB port for the GLS trim, and all three trims get a mini exterior makeover with a refreshed grille and added chrome trim. Those features plus the high beltline, trapezoidal headlamps, body-color door handles and sculpted fenders give the Elantra a feel of understated style. 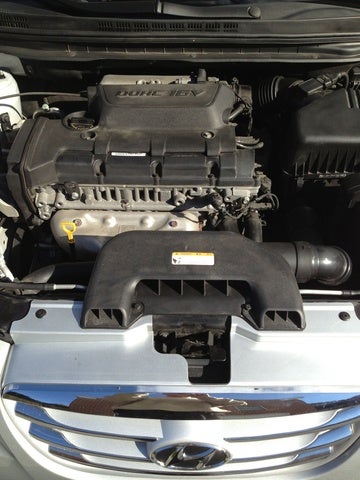 The drivetrain delivers adequate acceleration, going from 0-60 in 8.4 seconds, according to one test. That’s enough to move the Elantra in and out of traffic in the city or on the highway, but it’s nothing spectacular. Reviewers like the automatic transmission, praising its smooth and timely shifts. The manual transmission receives average reviews and left some critics unimpressed with clunky shifts.

One of the Elantra’s selling points is its quiet cabin, too often a rarity for economy cars. The engine can get a touch noisy when pushed past 3,500 rpm, but overall Hyundai has done a commendable job keeping wind, road, and engine noise out of the cabin, a major plus for anyone who spends a lot of time on the highway.

The Elantra feels structurally solid on the road and its independent suspension handles most road imperfections with aplomb. There is a bit of lean during tight cornering, but in general the tires remain firmly gripped to the road. Its acceleration is average at both high and low speeds, but there’s enough to move in and out of traffic.

Some feel the Elantra's electric power steering is on the light side, but it is responsive and accurate, and its tight turning radius makes navigating traffic and parking in tight places very easy. The four-wheel antilock disc brakes provide sure stops and good pedal feel.

The spaciousness, craftsmanship, and material quality in the Elantra cabin make it feel like much more than your average compact. In fact, the Elantra’s 112.1 cubic feet of interior volume (97.9 for passengers) make it a midsize by EPA classifications. All that space means plenty of room in the back seat (a rare commodity in this class) for two large adults and three of average size and plenty of headroom and legroom in the front. Hyundai was generous with cargo space as well, with the Elatnra’s 14.2-cubic foot trunk.

All that space gets styled with cool blue interior lighting that furthers the Elantra’s upscale feel, as does the plush cloth upholstery and dash-top grain trim. The gauges are easy to read and well placed, and the controls are blessedly simple. In addition to being roomy, the front and back seats are well padded and ready for all-day driving or riding.

The Elantra earned a five-star rating (the highest available) for driver and front passenger protection in front-end impact government crash tests and received four stars for front and rear passenger protection in side impact crash tests. It also received a four-star rollover rating (a 10 percent chance of rolling over in a single vehicle crash), a very good result for this class.

Most Elantra owners seem to share the feeling that they got a lot of car for a small amount of money. They universally praise the car’s smooth and quiet ride, fuel efficiency, and interior comfort. They all love the way it looks (of course if they didn’t, they probably wouldn’t be owners) and seem surprised with the amount of power to be had when needed. Some owners went out of their way to praise the 172-watt stereo as well and are very pleased with its sound quality.

Some are disappointed that the Electronic Stability Control and Traction Control were only available on the SE trims. And some wanted power seat adjustment options, a 6-CD changer option, and auto-up and down for the windows. But these all felt like minor complaints when weighed against the praise for the car’s build quality, handling, style, and comfort.

What's your take on the 2010 Hyundai Elantra?

Users ranked 2010 Hyundai Elantra against other cars which they drove/owned. Each ranking was based on 9 categories. Here is the summary of top rankings.

Have you driven a 2010 Hyundai Elantra?
Rank This Car

Just stopped working while we were driving home. Did something unplug?

Can I Lower My Monthly Payments To Fit My Budget?

How can i lower my monthly car payments ?

15 views with 4 answers (last answer about a year ago)

2010 Hyundai Elantra Stopped Moving What Is The Possible Reason ?

The car stopped moving suddenly . I can start the engine normally , but when I put the gear on the drive " D " or reverse " R " or neutral " N " the car don't move . I checked the gear with different ...

182 views with 8 answers (last answer about a year ago)

Power Windows Will Not Go Up

I have a 2010 Hyundai Elantra, and the issue I'm having is that I can put all the windows down from the driver's side master switch and each window's respective switch. However, I cannot put them up...

How Do I Sell My Car On This Site