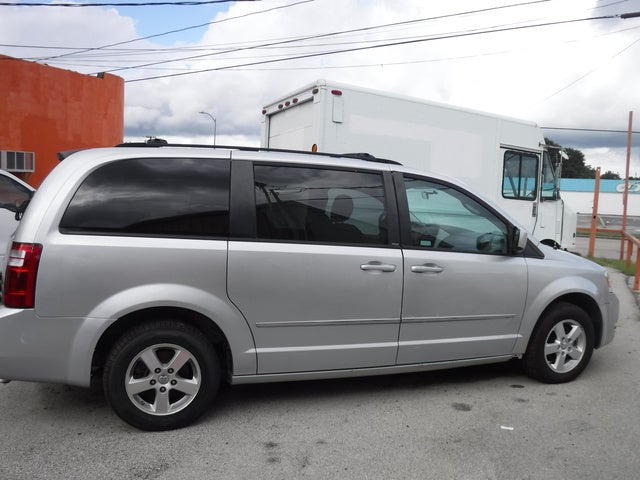 The 2010 Dodge Grand Caravan provides the space, comfort, convenience, utility, and versatility required of a minivan at a price that will make any family smile.

The standard 3.3-liter V6 in the base trim of the 2010 Grand Caravan is underpowered and the cabin materials fall short of the competition's.

If you want an adaptable, practical, and affordable minivan with some fun and innovative options, the 2010 Dodge Grand Caravan has just what you need. Unless you opt for an engine upgrade, the Grand Caravan won't blaze up the streets, but who races minivans?

It looks like the 2010 Dodge Grand Caravan hit the gym. The round and chubby contours of the 2009 Grand Caravan are replaced by a leaner, simpler look with broad shoulders, a higher hood, and a flatly square back end. The Grand Caravan isn’t trying to hide the fact that it’s a minivan, like some in the class, but its straightforward appeal is very similar to that of many crossovers.

While Dodge gave the Grand Caravan an eye-pleasing makeover, it didn’t forget the true nature of the minivan and made sure this vehicle has the necessary mix of space, versatile practicality, and monetary value. The Grand Caravan seats seven and has 143.8 cubic feet of cargo space behind the front seat, and you can actually use all of that space with the standard Stow ‘n Go seating system. There are multiple entertainment options to keep the whole family happy on road trips and an excellent set of safety features to keep them safe.

The Grand Caravan comes in two basic trims, SE and SXT. The SE comes with a 3.3-liter V6 with a four-speed automatic transmission, while the SXT has a 3.8-liter V6 with a six-speed automatic transmission. The SE has plenty of standard features (tri-zone air conditioning, rear seat HVAC with controls, cruise control, power accessories, heated mirrors, and more), especially impressive when you consider its $23,995 MSRP. For about $3,500 more, the SXT adds some nice touches, including a trip computer, power-adjustable pedals and driver’s seat, ambient surround lighting, second-row power windows, and fog lamps. 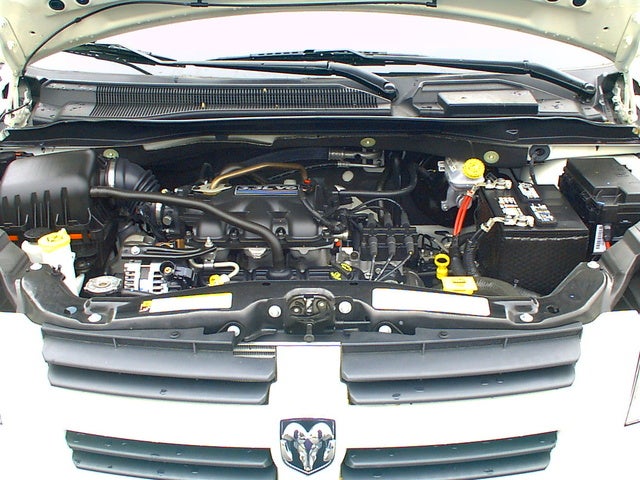 The 3.3-liter V6 is flex fuel capable and can run on E85, a very nice option. However, many critics found this engine underpowered given the Grand Caravan’s 4,321-pound curb weight. Even Dodge acknowledges this lack of pep by listing the SXT’s towing capacity as “Not Recommended.”

The 3.8-liter V6 uses regular grade gas and provides enough power for most situations. Dodge recommends using 89-octane gas for the 4.0-liter, which adds noticeable boost when passing and merging on the highway.

The Grand Caravan glides smoothly down the road, even over significant bumps, floating like a typical minivan. Floating rides usually don’t translate well on curvy roads or in tight cornering spots, but the Grand Caravan does surprisingly well in both places.

The Electronic Stability Program that comes standard on both trims helps the vehicle grip the pavement. Expect some body lean moving through corners or winding turns, but not enough to feel out of control. And while no one likes parallel parking a minivan or even squeezing into a tight spot with one, the Grand Caravan has a very manageable turning radius that makes these chores less difficult.

The SXT comes with a sport-tuned suspension with both the 3.8-liter V6 and the 4.0-liter option that gives the vehicle a more car-like ride – less float, less lean, and an overall tighter feel.

Most testers praise the Grand Caravan as an exceptionally quiet minivan, perhaps the quietest available. That’s a plus for long road trips when there will likely be enough noise coming from inside the vehicle. The front seats remain comfortable even after multiple hours of driving, and the gauges are intuitive and ergonomic. The rear seats also hold up for road tripping, which should keep passengers happy, along with the entertainment and separate HVAC controls that Dodge provides for the second and third rows. 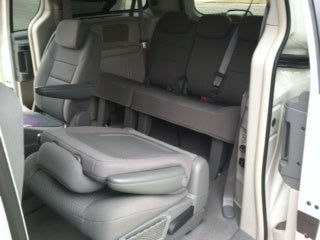 You will be hard-pressed to find a more innovative and versatile interior than the Grand Caravan’s. It starts with the standard Stow ‘n Go second-row seats - a pair of captain’s chairs that fold into the van floor for extra cargo space. The power-folding third-row bench can also disappear to turn your minivan into a cargo van. Or the third row can face out for seriously plush tailgating.

There is also a Swivel ‘n Go option for the second row – two captain’s chairs that can turn to face each other or the third row, and a table to put in between the rows, creating a family room in the back of your minivan.

Some critics complain that the second row seats don’t stow or swivel easily enough, but owners don’t seem to mind the conversion process. Besides, how fast do you need to change the seating arraignments? Chances are it won’t come up in the pits at a NASCAR race. Another common criticism is that the Stow ‘n Go seats are made thin so they can be stowed, but this lack of cushion makes them uncomfortable.

The Grand Caravan’s list of interior features is hard to beat, and the cabin assembly is generally considered first rate. The one drawback on the inside is the material choice, where too many hard plastics fall short when compared to the more elegant cabins of Japanese minivans.

Dodge took safety very seriously when constructing the Grand Caravan, and considering that minivans are usually hauling children, that has to be a major plus for consumers. The Grand Caravan receives five stars in front driver, frontal passenger, side driver, and side rear passenger NHSTA crash tests and a five-star rollover rating.

Perhaps the thing that stands out the most as you peruse the owner comments about the Grand Caravan is this: Many consumers are on their third, fourth, or fifth Caravan. If repeat customers aren’t a sign of a quality product, nothing is. And there also many who have owned multiple types of minivans and insist that the Grand Caravan is the way to go.

Owners also repeatedly refer to their Caravans as “undervalued” or “underrated.” They seem to be fed up with the critics heaping more praise on Honda or Toyota products while their Grand Caravans deliver more features, a better ride (to them), and a safer overall vehicle at a better price.

While some critics feel the Stow ‘n Go seats are difficult to operate, owners seem to have nothing but praise for them, rejoicing in their convenience and the added cargo space they provide. Owners also love all the available entertainment options, especially those that allow the kids in the back seat and the parents in the front seat to enjoy separate audio or video offerings. And those who opted for the 4.0-liter V6 like to brag about the speed and power of their minivan, a boast you don’t hear every day.

What's your take on the 2010 Dodge Grand Caravan?

Patsy I love Dodge caravan,it's accommodating to take a family of 7 and very safe. I was in a head on collision with my 06 at 40 mph .I had leg airbags I didn't even know I had. If I would of had my other vehicle my legs would not even walk right now. I didn't even have a broken bone because of the caravan I was in . I recommend them to everyone

Have you driven a 2010 Dodge Grand Caravan?
Rank This Car

I was returning to my empty, running, van while in park, on an inclined driveway, parked in back of another car, and as I was walking between the 2 cars I brushed the hood with my hand,and it star...

Nothing Happens When I Push Down On The Gas Pedal.

I have a 2010 Dodge Grand Caravan. Last night, my battery died. I received a jump from another car and my engine was able to start. When I put the car into drive and stepped on the gas pedal, howeve...

When the gear shift is in drive there is a minus sign to the left and a plus sign to the right. The shift handle will move left or right but doesn't seem to do anything. What are these for?