The 2008 Hyundai Sonata is a value leader, offering a long list of standard equipment.

The Hyundai Sonata is an elder of the mid-size sedan segment, but its smooth styling, excellent equipment, and strong value still make it a compelling option to consider. The 2008 model has been updated with new features for the SE trim level, a premium stereo as standard equipment for the Sonata Limited trim level, and standard SiriusXM satellite radio across the lineup.

For the 2008 model year, the Sonata is offered in three trim levels: GLS, SE, and Limited. Two engines are available as well: a 162-horsepower 2.4-liter four-cylinder and a 234-hp V6 engine. A five-speed manual transmission is standard for models equipped with the four-cylinder engine and a four-speed auto is available. All Sonata models are front-wheel drive.

The Sonata is targeted at new-car buyers that are value-conscious and need a reliable sedan with a great warranty. It competes with the Nissan Altima, Honda Accord, and Toyota Camry, among others. It slots into the Hyundai lineup above the smaller and cheaper Elantra, but below the full-size Azera and recently-launched Genesis luxury sedan. 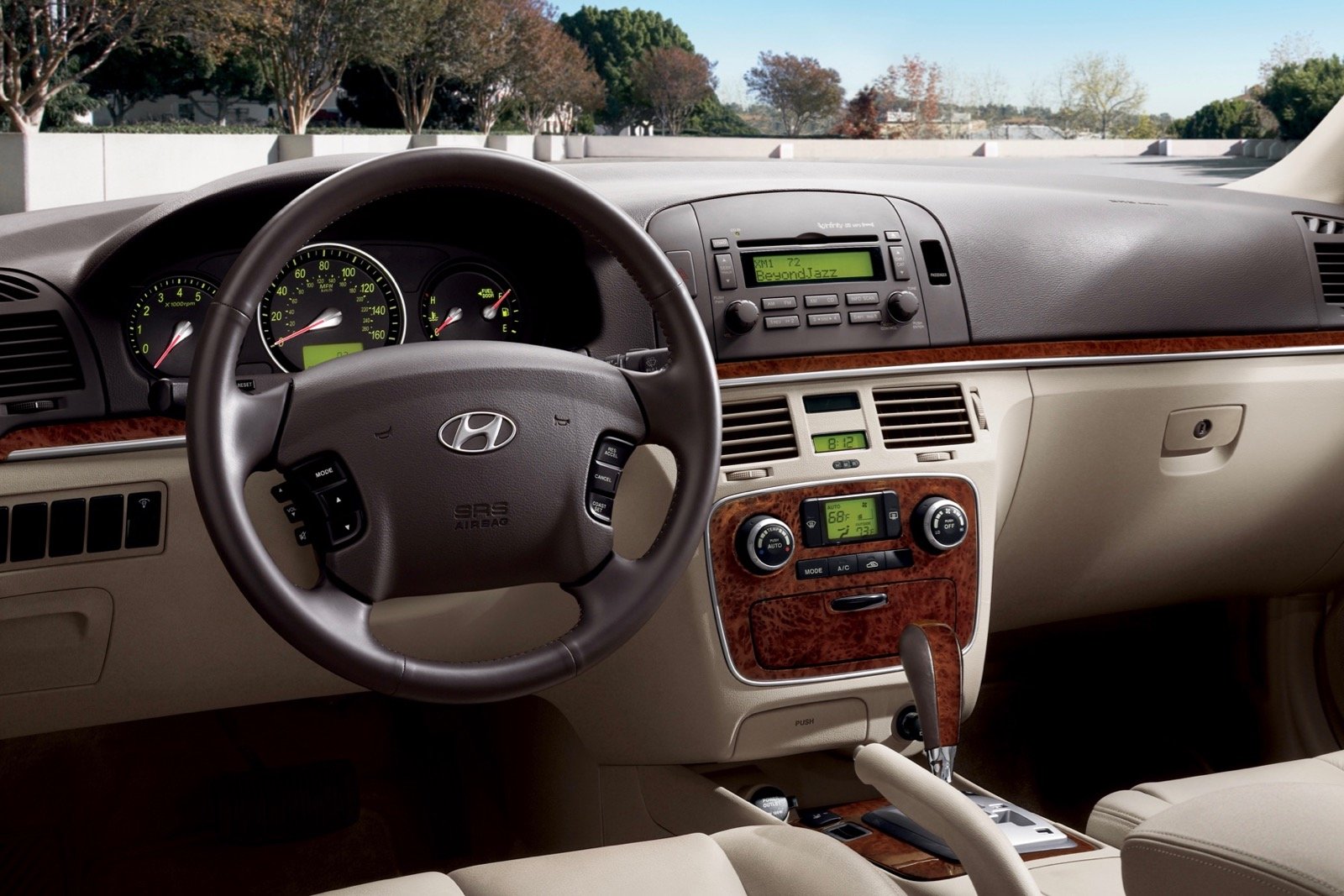 Though it’s starting to show its age after almost five years on sales, the Hyundai Sonata still looks fresh, contemporary, and clean. It sports long lines and a rounded front end, which gives the sedan a family-friendly look. Optional alloy wheels sharpen up the exterior quite a bit, but the Sonata is just fine on its base 16-inch steel rolling stock. The Sonata SE also comes with a deckled spoiler to bump up its sportiness.

The Sonata’s interior features more than a few hard plastics and cheap materials, but it’s on par with what is seen from the rest of its class. The dash is cleverly designed to reduce glare, as the top portion is a dark color while the lower dash is lighter in color. The contrast serves to make it easier to see in bright sunlight but also helps make the cabin look bigger inside with light colors low in the interior. 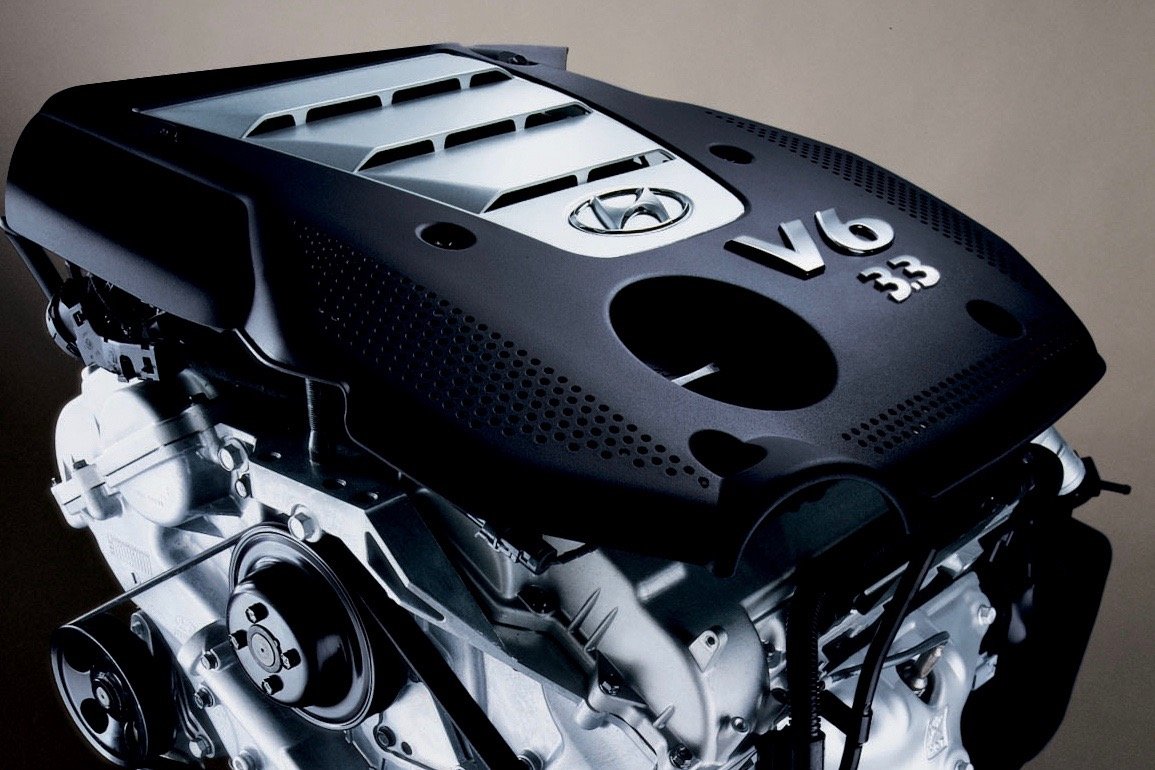 The good news for potential Sonata buyers is that it’s hard to go wrong with either engine choice. The 162-horsepower four-cylinder engine delivers healthy acceleration and has no trouble pushing the Sonata and a carload of passengers to highway speeds and beyond. The 234-hp V6 can be thrilling at times and makes the Sonata truly quick. Both engines use trick tech to boost fuel economy and lower emissions. As a result, they’ve both achieved LEVII ULEV designations from the Environmental Protection Agency (EPA).

The five-speed manual transmission provides good feedback and is easy to drive, but the automatic gearbox, which most buyers will likely choose, is equally as crisp. It cracks off shifts smoothly and downshifts willingly for quick maneuvers around town or for passing on the highway. Though a five-speed automatic transmission would be nice, the four-speed can hold its own.

The Sonata’s ride quality is on par with what is expected from a family sedan. Its suspension is able to absorb the bumps on poorly-maintained roads, but the larger 17-inch wheels cut into that comfort level noticeably. Braking and steering are both predictable and solid, greatly increasing the Sonata's sense of security on the road. 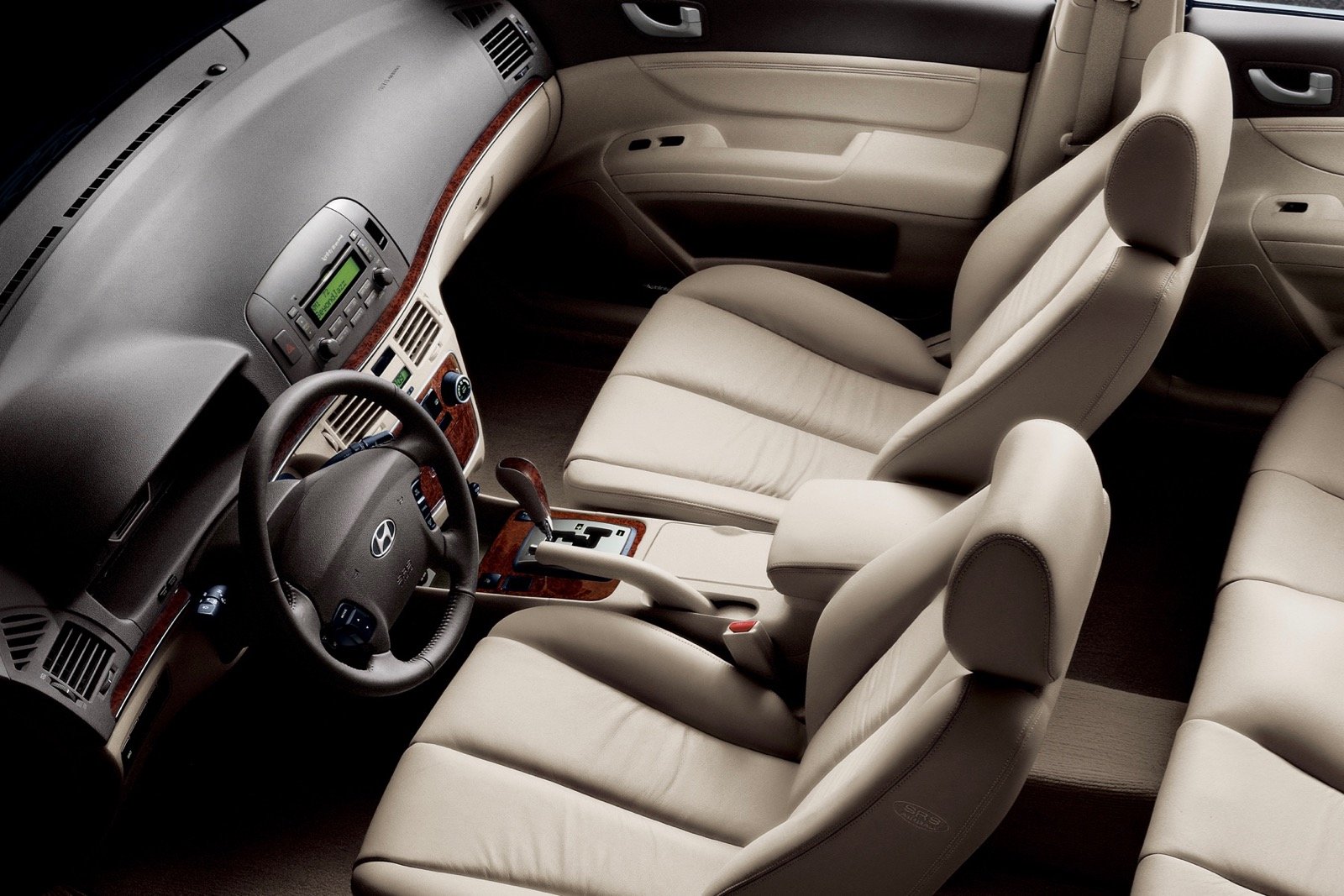 The Sonata fulfills its duty as a family hauler without complaint. The front seats are comfortable, well-padded, and offer a good deal of bolstering support to keep drivers and passengers in place when the road gets curvy. The range-topping Limited model’s leather seats feel premium, thick, and soft.

Outward visibility is great in most directions, but suffers slightly to the rear blind spots, thanks to larger-than-necessary C-pillars on both sides. The rear seats are not as flat as many competing sedans and are a much nicer place to spend time because of it.

The Sonata’s trunk is deep, and it has a large opening that makes loading and unloading gear much easier. The car’s agreeable ride height aids in lifting cargo in and out as well. 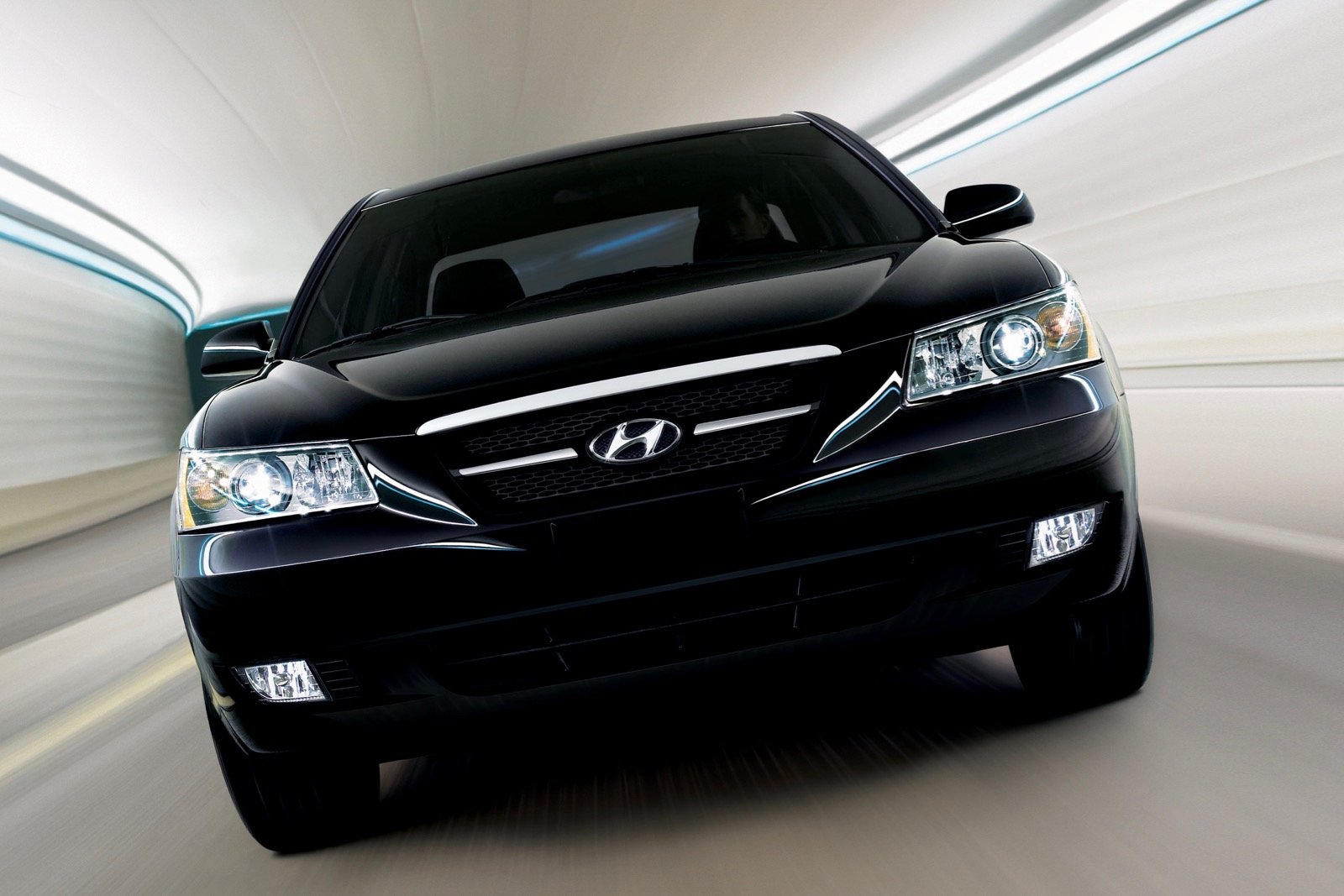 The Sonata’s tech offerings are simple but work without hassle. The car’s relatively quiet interior helps make the audio system's sound quality clean and crisp, and in models with the available subwoofer, the sounds are deep and can even be bone rattling at the right volume.

The Insurance Institute for Highway Safety (IIHS) gave the 2008 Hyundai Sonata its top "good" rating in the moderate-overlap front crash test, "acceptable" in side crash tests, "marginal" for roof strength, and "good" for head restraints and seats. The National Highway Traffic Safety Administration (NHTSA) rated the Sonata five stars in front and side crash tests, and four stars in rollover resistance. 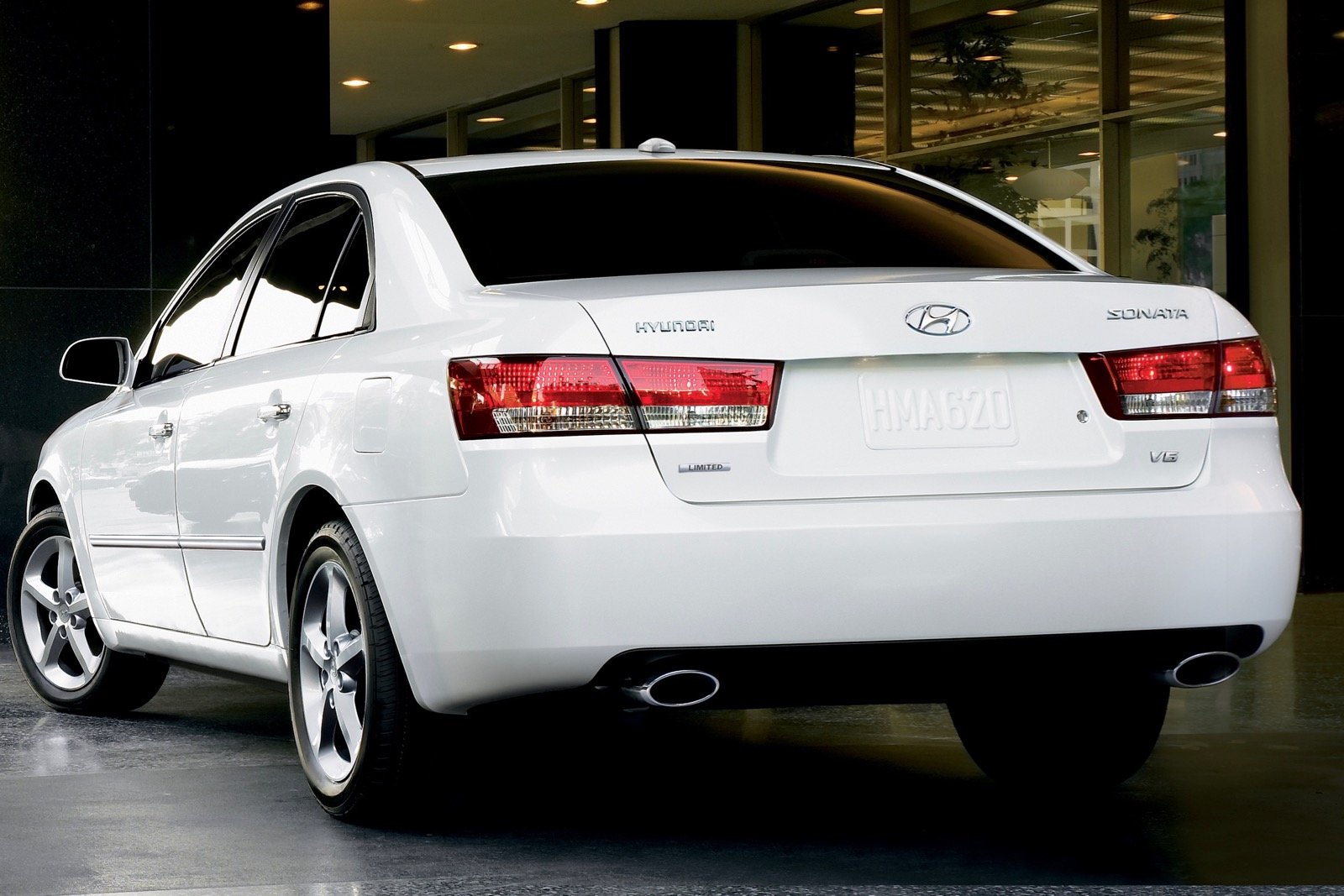 The Hyundai Sonata GLS trim level is well equipped out of the box, and its starting price of just $17,670 before destination, taxes, or options can’t be beaten. Stepping up one level to a Sonata SE only brings the price to $19,570, and the Limited model is only $22,470. Adding the V6 engine bumps the price by about $3,500. There’s usually a caveat here that, despite having a great price, the vehicle just can’t deliver on equipment, but that isn't the case for the Sonata. It’s good in nearly any configuration, too, which makes it a value leader in its segment. Even the range-topping Hyundai Sonata Limited wins on value.

Buyers won’t be disappointed in fuel economy, either. With the four-cylinder engine and a manual gearbox, the Sonata delivers EPA-estimated fuel economy numbers of 21/31/25 mpg city/hwy/combined, and with an automatic transmission, those numbers shift to 21/30/24 mpg. Stepping up to the V6 powertrain will net gas mileage of 19/28/22 mpg.

What's your take on the 2008 Hyundai Sonata?

Enahma I have had two Hyundai’s, a 2006 and a 2008. To my surprise, I have read several forums where consumers like myself have complained of problems of their Hyundai’s from both of these years up to the current model. I thought the engine and electrical problems were exclusive to my first car being a 2006 Hyundai Sonata, however, I am experiencing the same problems in my 2008 Hyundai Sonata. Either the sensors light up and nothing is wrong with the car or there is a car problem and they don’t light up. In both cars, the connecting rods malfunctioned. Catastrophic failure of the connecting rods, they are defective in these cars. Very disappointing. Hyundai will not own up to the inferior product they are putting into their engines. I will never purchase another Hyundai and I warn others not to do so also. Consumers will be gravely disappointed.

Users ranked 2008 Hyundai Sonata against other cars which they drove/owned. Each ranking was based on 9 categories. Here is the summary of top rankings.

Have you driven a 2008 Hyundai Sonata?
Rank This Car

I sent a message to a private seller several days ago and it hasn't even been viewed yet. Can you contact the party and find out if the vehicle isn't available and that is why they aren't opening it...

Refridgerant level is good. Compressor turns when fuse works. Fan works. Whenever i turn on my ac, the fuse blows immediately. Got it working for about five minutes. Turned the car off and back on,...