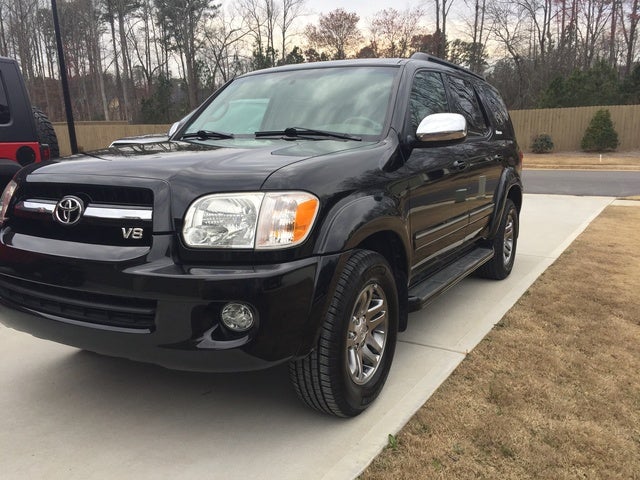 Average user score
4.4 ⁄ 5 stars
Based on 9 reviews
Toyotas Rock by Melissa — For a Large SUV it has great GIDDY UP!! :) Lots of room (seating for 7-8) Plus cargo. Leather, seat warmer, sunroof, all the bells and whistles. PLUS I got the last of that body style (not as crazy ... Read more
Big Car, For Big Family by mercedesmann — Had this toyota sequoia. Really nice for big families. And large cargo trunk allows to easily move boxes also. NNot too much fuel consumption and seats are much good organized. Good leg space for each... Read more
Review by ToyotaaJeff — Same or better than a 4 runner. Never had any issues. Change the oil. Brakes and tires when needed. I’ve owned 3 Sequoias from the 2001-2007 range. Read more 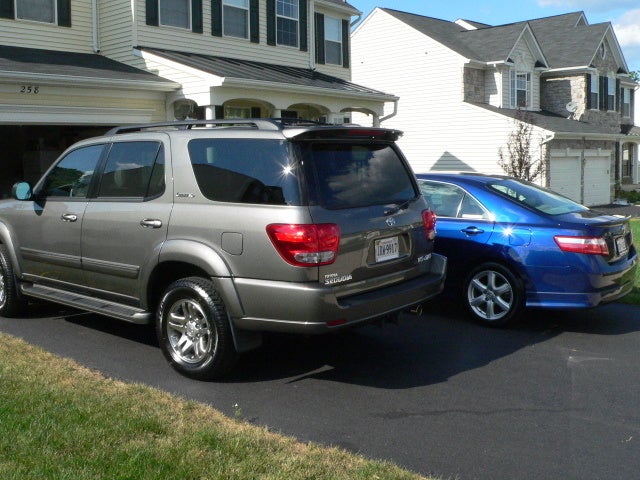 The Sequoia arrived at the turn of the century to surpass the Land Cruiser as Toyota's largest SUV. The Sequoia is massive: comparable in size to the GMC Yukon and Ford Excursion. Dimensions are unchanged for 2007, remaining at 203 inches long, 73 inches tall, and 79 inches wide. In fact, the Sequoia has seen little change since its introduction. Toyota has announced that an entirely new version is on the way for 2008. All Sequoias use the same engine, but two different trims and drive trains are available.
The Sequoia's power plant is a 4.7 liter i-FORCE V-8, aided by Variable Valve Timing technology, and mated to a five speed electronically controlled transmission. The i-FORCE addition offers both a significant horsepower increase and lowered emissions. This is the first Toyota SUV to earn a ULEV ultra low emissions rating. The Sequoia is supplied with 273 horsepower and 314 pound-feet of torque. A significant curb weight of 5130 to 5300 pounds pulls towing capacity down lower than 4.7 liter 4Runner. The Sequoia pulls 6500 pounds, and has an EPA rating of 15/17 mpg.
The two available trims are SR5 and Limited. SR5 is the lower level option, but this style still includes power front seats, dual zone climate control, cruise control, power windows and locks, and a CD player. The Limited model adds running boards, a sunroof, leather, a ten speaker JBL sound system, heated seats, and keyless entry. The two are separated by nearly $10,000 in price.

What's your take on the 2007 Toyota Sequoia?

bigfoot567 Be very careful with the VSC and engine shutdown that can randomly occur. $3000 repair job. No recall but it's relatively common.

Users ranked 2007 Toyota Sequoia against other cars which they drove/owned. Each ranking was based on 9 categories. Here is the summary of top rankings.

Have you driven a 2007 Toyota Sequoia?
Rank This Car

Drove 1400 miles from Fl to NH no problems. Park car for the night get up to go to work in a.m and car wont stop. Brake pedal to the floor and the heavy thing just barley comes to a hault. Had to ...

700 views with 8 answers (last answer about a year ago)

How Do I Communicate With My Customer?

Yesterday I got a request for test drive from Kristina. I responded right away but don't seem to be communicating with her. What is wrong?

Can Car Gurus Assist In Shipping A Vehicle?

How do I ship a vehicle?

Sequoia Wont Start After A Tuneup At The Shop

Got my 2007 Sequoia back from the shop today where a tuneup was done including replacing spark plugs. It is Friday night and it wont start. Just clicks. Is there a reset button? No issues prior ...

Just changed front pads and rotors on 07 Sequoia. Now vsc off, vsc trac, and brake lights are all on. When test driving the brakes make a loud noise when coming to a full stop.