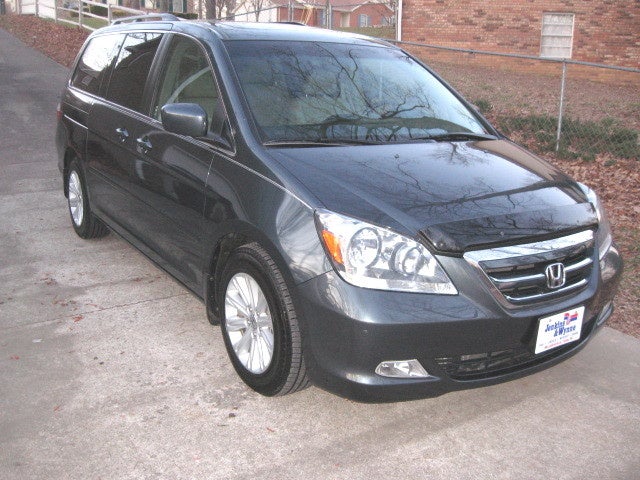 The best-selling Honda Odyssey moves into the 2006 model year with few changes. With its car-like handling, powerful engine, and intelligent interior space, it's a natural favorite. T... Read More
The best-selling Honda Odyssey moves into the 2006 model year with few changes. With its car-like handling, powerful engine, and intelligent interior space, it's a natural favorite.
The luxury, top-of-the-line Touring trim adds run-flat tires, a power tailgate, a stiffer suspension, front and rear parking sensors, automatic tri-zone climate control, power-adjustable pedals, an upgraded sound system, and a DVD rear entertainment system, among other features, to the already well-equipped EX-L trim.
The Odyssey Touring features the iVTEC equipped 3.5-liter V6 engine that produces 244 hp with 240 lb-ft of torque. The iVTEC timing and valve control system teams up with Honda's Variable Cylinder Management (VCM), which shuts down three cylinders during cruising and deceleration for improved gas mileage. Honda claims that VCM can increase fuel economy by 12% over the VTEC V6 offered in the LX and EX trims. The EPA rates the iVTEC engine at 20/28 mpg on regular fuel. In addition, the VCM system also includes Active Noise Control (ANC) technology, which incorporates the car's audio system to cancel noise from the VCM system.
The V6 flows power through a five-speed automatic transmission to the front wheels with almost no torque steer. The 0-60 cruise happens in the high 8-second bracket.
The Odyssey EX can comfortably carry up to eight passengers depending on its seating configuration. The first and second rows offer bucket seating - with a removable "PlusOne" mini-seat (the eighth seat) in the second row - and the third row has a split 60/40 bench seat that folds into its own well; some reviewers claim the bench seats are comfortable for medium-size adults. The interior has a number of storage spaces, two glove boxes, even a "Lazy Susan" bin, and 17 cupholders spread throughout it. Reviewers all found the interior comfortable, quiet, and convenient.
The Odyssey also gets high marks for its ride and handling. One reviewer actually tested it on a race track, finding the Odyssey stable at high speeds and "chuckable" through the corners. The ride is taut but comfortable for long trips and much closer to a sedan's than an SUV's. The brake system is well engineered, with every Odyssey featuring ABS, Vehicle Stability Assist, brake assist, and electronic brakeforce distribution.
Besides the brake system, all Odysseys come equipped with front and side airbags, three-row side curtain airbags with rollover sensors, and improved crash protection through a revised body structure design. The Touring trim gets run-flat tires and a tire-pressure monitoring system. The Odyssey gets top ratings in government and insurance crash testing, being named a "Best Pick."
Collapse
Touring FWD with DVD and Navigation
Reviews (3)
Pictures (139)
Pricing
Adds to LX FWD: