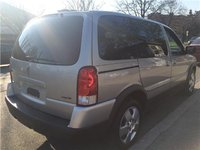 Owners manual says under instrument panel on passenger side but have been unable to find it. My 2003 montana has it on end of dash inside passenger door but the 2005 sv6 does not have it there.

I Have No Heat In The Front. Rear Heat Works. Replaced Blend Door Actuato...

Does Anyone Happen To Know What This May Be?

Does anyone happen to know what this is? There is a hole and it is leaking some sort of oil or fluid, it’s located on the passenger side near wheel. I have honestly looked up everything to try and...

Hello, I am having a problem with my 2007 pontiac montana SV6 i was going uphill and stopped to turn at a light and it stopped moving forward. I could and can still run in reverse no problem it has ...

294 views with 2 answers (last answer about a year ago)

GM tried everything to make the minivan a little more attractive. SUV styling, sports performance packages, even a rebranding as a mid-van -- none of these were able to boost the popularity of the Pontiac Montana. The Montana SV6 was the last ditch effort to re-market the minivan as a crossover SUV.

Introduced in 2005 as a complete redesign of the old Montana, the SV6 wasn't drastically different. It featured the extended hood, squared grille, and wrapped headlights that were characteristic of SUVs, and offered AWD capability for more adventurous driving. But it was built on the same platform as the old extended Montana minivan (though with a slightly longer length and wheelbase) and came equipped with all the great features families want out of a minivan.
These included dual sliding doors, fold-down and removable second and third row seats, a standard DVD system, ceiling rails for extra storage, OnStar, as well as various consoles and fold-down trays with cupholders. Four-wheel ABS and dual front airbags were standard, but side bags, traction control, and stability control unfortunately were options. The Montana SV6 was actually decently outfitted at an affordable price when placed next to its strongest competitors. And it featured a lot of creature comfort extras, such as a garage opener, remote start, XM radio, and a removable hard drive to store games, pictures, and songs.
Owners appreciated the more stylish SUV looks over the bland and conformist minivans of old, and they loved all the standard features and the overall car-like handling. But the V6 engines that got either 200 or 240-hp were never quite powerful enough for this mid-van, and some were disappointed with the number of repairs needed so soon. Though the dual sliding doors, low step-in height, and the Sit-and-Lift second row seat option provided easy general access, trying to get to the third row was always difficult. The Pontiac Montana SV6 never really made a dent in sales or shed its minivan stigma, despite how much GM tried to dress it up.