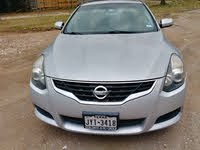 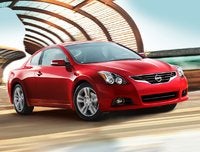 Losing Power After An Hour 1/2 - 2 Hrs Or Driving. Whats The Cause?

If I go uphill, say to Vegas from Cali it losese power. I'll go 80 and it will steadily drop to 60. It also has a whirring sound. Nissan dealership says its not my transmission. Co-workers say its my ...

does not blow out front dash vent ?

Will parts from a 2009 Altima coupe fit a 2012 Nissan Altima coupe 2012 such as The radiator oil pan driver airbag and maybe the steering arm ?

White Smoke At Start Up

So I'm curious if anyone would know what is happening with my car. There is thick white smoke at start up. Before I go to school cloud of white smoke that lingers. Get out of school start it up wh...

316 views with 3 answers (last answer about a year ago)

My Car Loses Acceleration While Driving.

While driving long distance my car loses acceleration, i have pulled over shut it down and restart the car, after a few minutes than it works again. I have taken the car to the dealer and they have ...

Essentially a cross between the super-sporty Nissan 350Z and the much more practical Nissan Altima sedan (which is the automaker's best-selling vehicle), the Nissan Altima Coupe debuts for the 2008 model year amid an appropriate amount of hoopla. With attractive, swooping lines (borrowed from the Z as well as the Infiniti G37) and sharing two engines and its basic interior design with the Altima sedan, the new Altima Coupe was designed to appeal to younger buyers as well as drivers looking for something with a bit more pop and sizzle than the typical mid-size family sedan.

The Altima Coupe certainly delivers on all accounts. Although it borrows its overall design from the Altima sedan, which received a redesign in 2007, the Coupe is its own beast, sporting a distinctive grille, headlights, taillights, side panels, and rear end (only the aluminum hood is the same in both models). Overall, the Coupe has a lower roofline and a higher trunk and rear end, giving it a more muscular, rakish appearance.

The Coupe is also shorter and lighter than the sedan, which means that it's a bit quicker and more responsive, another appealing factor for many drivers. And it features a number of innovative technologies, including an Intelligent Key system with instant push-button ignition, standard anti-lock brakes with Electronic Brake-force Distribution (which adjusts braking depending on passenger weight and cargo), and an available Bluetooth hands-free phone system.

Under the hood of the new Coupe is a choice of two engines. The 2.5 S model receives a 2.5-liter inline four-cylinder engine that produces 175 horsepower, while the 3.5 SE provides more get up and go, thanks to its 270-horsepower, 3.5-liter V6. Although the four-cylinder is certainly adequate, early drivers and reviewers recommend the V6 for buyers who really want to explore the new Coupe's limits.

A six-speed manual transmission is standard, while a smooth CVT (continuously variable transmission) with manual shift control is available as an option. Reviewers have given favorable comments to Nissan's new CVT, which they note is an improvement over similar transmissions in competitors' vehicles.

Inside, sport bucket seats with additional bolstering provide support in hard corners, while easy-to-read Fine Vision gauges and aluminum trim or optional wood-tone accents give the interior a sporty yet elegant feel. Other features include six standard airbags, a six-speaker AM/FM stereo system with a CD player and MP3 input, and vehicle-speed-sensitive power steering, which provides more power assistance at lower speeds for easier parking.

Early reports from reviewers and drivers indicate that the Coupe handles well and is a fun vehicle to drive. Overall, the consensus is that the new Altima Coupe stacks up well against its competitors in a growing market segment (mid-size coupes), and is a worthy addition to Nissan's lineup.