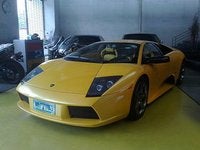 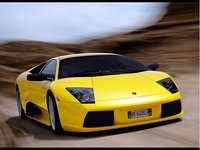 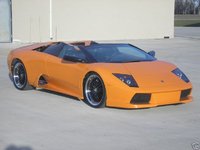 How Fast Is It?

What Is The Fastest Car

Why I Can't Move My Car In Low Rpm

if i use low Rpm in first gear my LP-640 is stuck and shut down is the engine wrong??? please i need answer

how much does a lamborghini murciealago cost?

It's Spanish for bat (hence its use in Batman Begins), but the latest supercar from Lamborghini is actually named for a bull that would not die, despite being pierced with 24 spears. The Murcielago continues the Lamborghini tradition of bull-related names, but it also ups the reputation for unique, bold, and diabolic styling along with road-ripping power and performance.
Introduced in 2002 as a replacement for the popular Diablo coupe, the Murcielago first got its juice from a 570-hp 6.2-liter V12 engine, which was later upped to a 6.5-liter at 640-hp. All-wheel drive capability gives it more versatility in rough road and weather conditions. Trademark up-swinging doors, dual side intake scoops, folding mirrors, and an adjustable rear spoiler help with the aerodynamics. For those who love the mid-mounted engine too much not to show it off, there is an optional glass cover panel.
A roadster version joined the Murcielago lineup in 2004, and in 2007, a higher-performing LP640 coupe and convertible were introduced. Both featured a retuned suspension, new 18-inch wheels, a more aerodynamically-oriented front and rear end, and increased headroom for the two passengers inside. Leather seats, power mirrors, seats, locks, and windows, and a center console keep you relaxed and comfortable while you're showing off.

Since most drivers by this car for its angry looks and intense speed, there are few complaints, other than the abysmal fuel economy and a risk of speeding tickets. It's fast, OK? Why else are you buying this car?