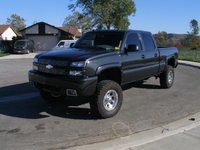 Why Won't My Truck Shift Into Over Drive

It will switch through all three of the other gears just fine but it will not shift into overdrive. I have replaced both solinoids, filter, fluid, and gasket. Not sure what else it could be

What Fuel Type For Silverado 1500

fuel type for chevrolet silverado 2018, they say no ethanol, in US that all they got

194 views with 2 answers (last answer about a year ago)

The owner's manual Diesel but the guy at the car dealership says its a gasoline.

32 views with 5 answers (last answer about a year ago)

Does This Vehicle Have The 6.0L Engine?

Introduced in 1999, the Chevrolet Silverado quickly became the second-best-selling truck in America (after the Ford F150). Sharing a platform with the GMC Sierra, the Silverado was designed to project an image as the tougher of the two platforms, which was reflected in the truck's Like a Rock advertising and marketing campaigns.

The Silverado was completely new inside and out, with rugged styling, new standard features, and updated mechanicals such as brakes and engines.

The truck also was available with regular or extended cabs, with short or long beds, and with two-wheel or four-wheel drive. Heavy duty models were also available.

The standard engine was a Silverado was a 270-horsepower, 5.3-liter V8, while the four-wheel-drive and heavy duty models received a 300-horsepower, 6.0-liter V8.

For 2000, two new trim packages, the LT and the LS, were added, and power was bumped up for some models.

In 2001, all Silverado models were available with a new 300-horsepower, 6.0-liter Vortec V8, and in 2003 the truck received an exterior redesign.

In its final year, the Silverado 2500 received a number of new standard features, including cruise control, power door locks, and a new AM/FM audio system with a CD player. The following year, the 2500 gave way to the 2500HD (for heavy duty) models of the Silverado.