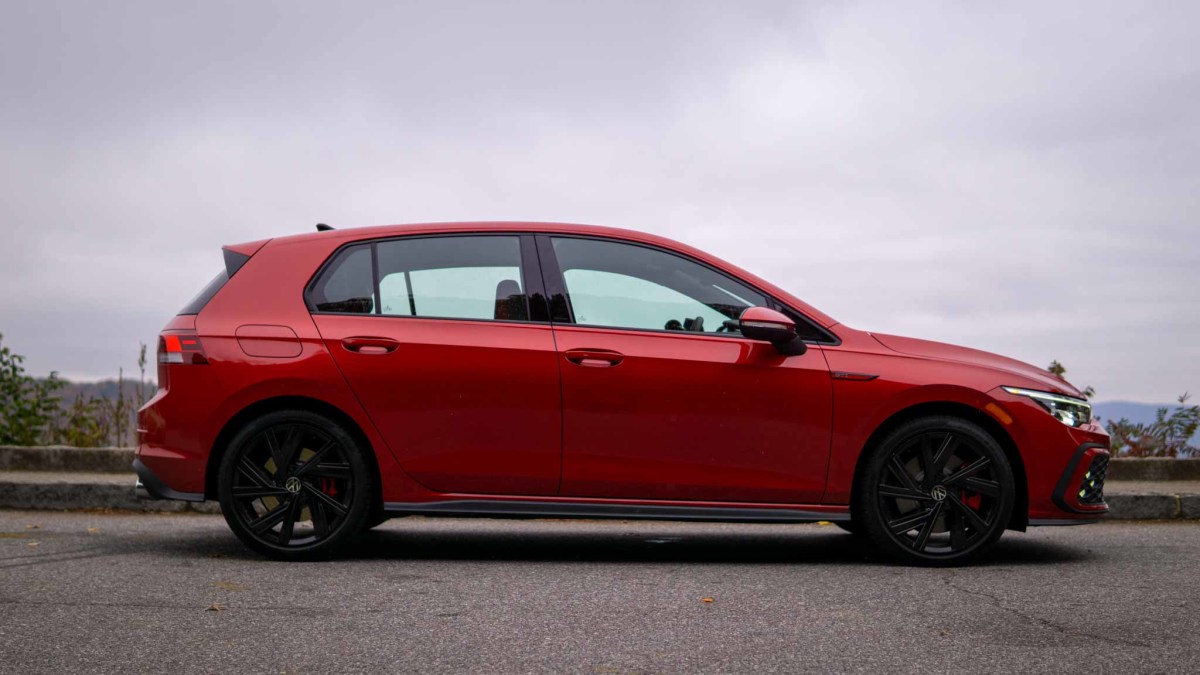 Looking for a New Volkswagen Golf GTI in your area?

The OG hot hatch gets in fighting shape while trying to stay with the times. 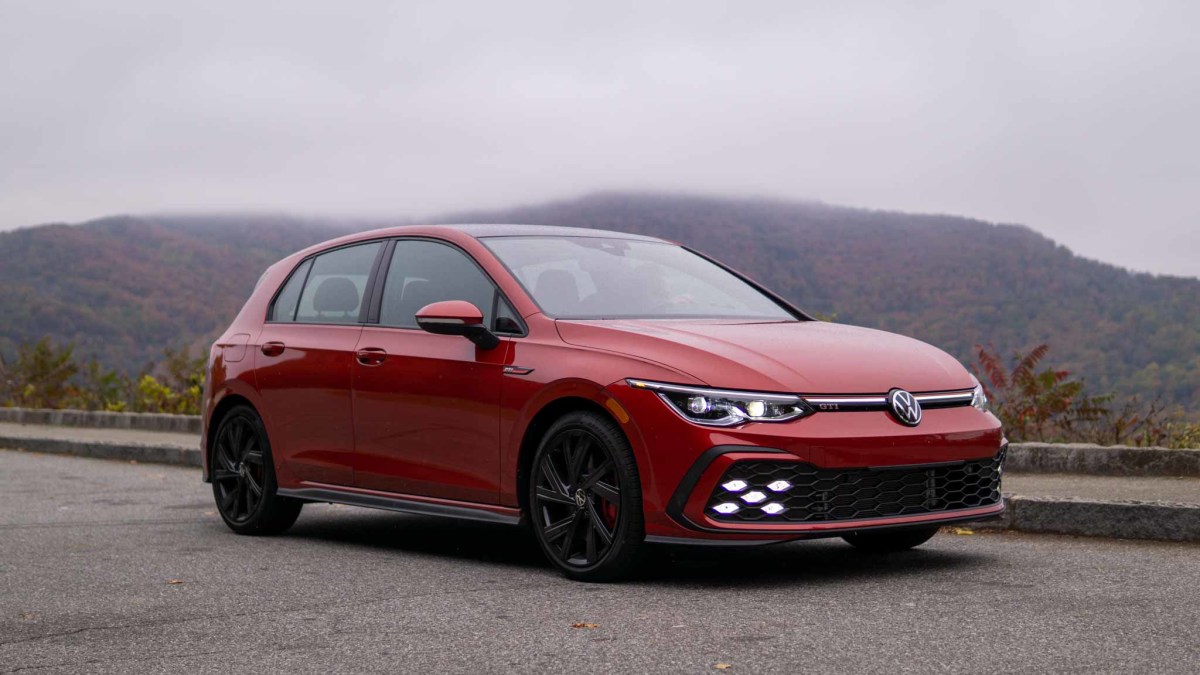 With its updated engine, revised suspension, and tech-forward interior, the latest iteration of Volkswagen’s legendary GTI looks ready to do battle with the Hyundai Veloster N as well as the upcoming Honda Civic Si and Subaru WRX. With regards to performance, the new GTI leaves almost nothing to be desired. 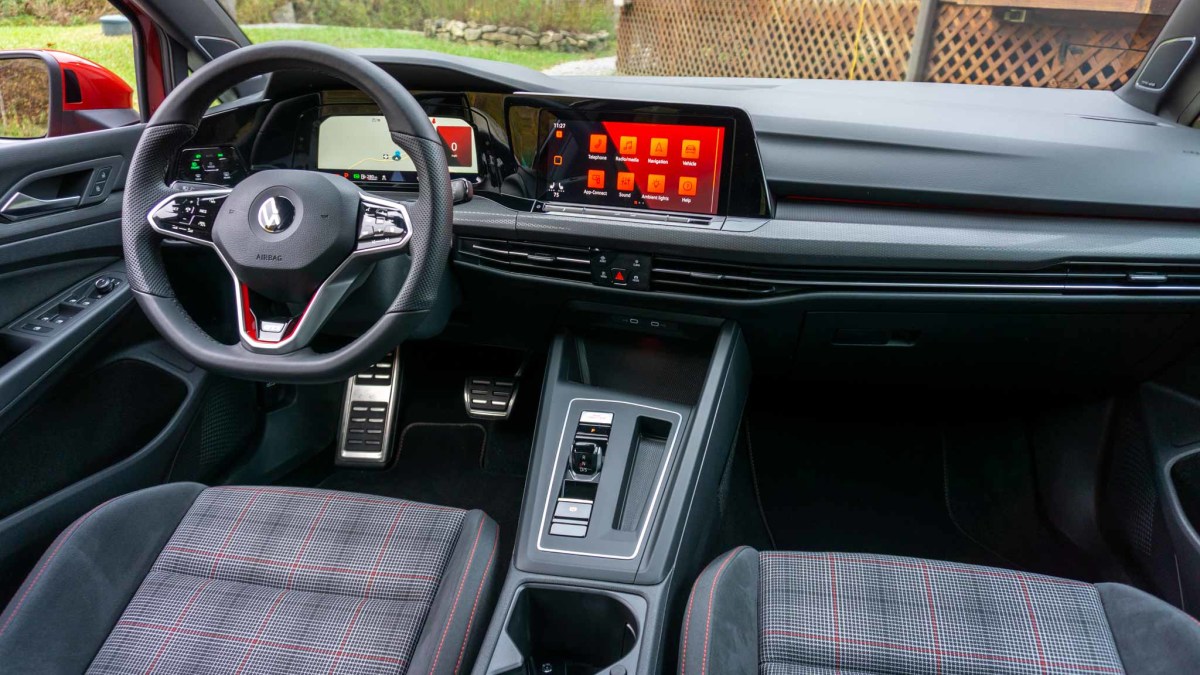 Although the company claims that every single body panel on the 2022 GTI is brand new, if you’re not a devoted Volkswagen fan, it may be tricky to see the differences between this new, eighth-generation (Mk8) car and the seventh-generation (Mk7) car. The new GTI is longer and lower, but its wheelbase remains unchanged at 103.6 inches. While the expanded dimensions help deliver a more stable silhouette, the short space between the GTI’s wheels indicates that this hatchback should be just as nimble and quick as earlier models.

In terms of styling, the new car follows typical Volkswagen Golf GTI form, with a hood that cascades smoothly down the front end. There is no big vertical grille on a GTI, just a subtle, honeycomb-patterned air intake below the VW emblem. Across the front, Volkswagen has kept the signature red accent line. It now runs along the full length between the LED headlights, and an optional light bar can be fitted below it, providing a lot more drama to the front end—particularly at night. LED fog lights are also standard.

Extensive aerodynamic work has been completed as well. Although you’ll be hard-pressed to notice, Volkswagen has redesigned the side-view mirrors to reduce drag, added some underbody paneling, and even revised the wheel-arch linings.

Every GTI is fitted with red brake calipers, but the size of the wheel they hide behind depends on the vehicle’s trim. S and SE trim GTIs receive 18-inch alloy wheels with Pirelli P Zero all-season tires, while the top-spec Autobahn trim rides on 19-inch wheels wrapped in summer tires.

Volkswagen has always sold the GTI in a set of staple colors like silver, black, and white, but occasionally something fun slips into the mix, too. Joining Reflex Silver Metallic, Deep Black Pearl Metallic, and Oryx White Pearl (ahem: silver, black, and white) is Atlantic Blue Metallic, Kings Red Metallic, and Moonstone Gray (blue, red, and gray). For the Autobahn trim, Volkswagen is offering Pomelo Yellow Metallic as a launch option. If you want that shade, be sure to hurry to your local store, as only one yellow model will be offered to each Volkswagen dealership.

On the inside, you’ll find plaid cloth seats arriving as standard equipment on the S and SE trims, with Vienna leather upholstery available on the SE and standard on the Autobahn. GTIs equipped with the 6-speed manual transmission retain the classic golf-ball shifter knob, and all trims get stainless steel pedals. 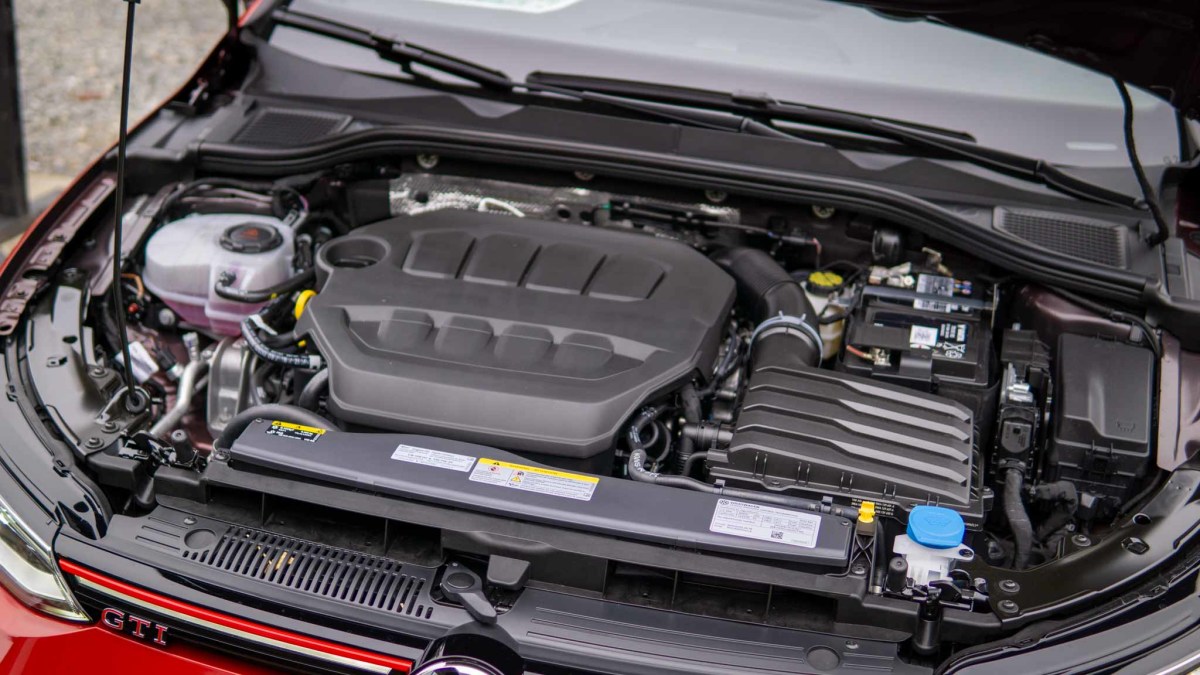 In 1983, Volkswagen introduced the GTI to the United States as a hotted-up VW Rabbit. It made all of 90 horsepower, but thanks to its light curb weight and sublime driving dynamics, shoppers went crazy for it.

For 2022, the horsepower figure has climbed all the way up to 241, courtesy of a 2.0-liter turbocharged four-cylinder engine. An updated version of the EA888 engine that motivated the Mk7 GTI, the new powertrain benefits from exhaust headers that are integrated into the cylinder heads, helping the GTI warm up faster and manage heat better. The new engine reaches peak horsepower at 5,000 rpm, but it was the torque that made the outgoing GTI so much fun to drive. 241 horsepower may look light compared with the 275 you'll get in a Veloster N, but thanks to the turbo, the GTI now delivers a rip-snorting 273 pound-feet of torque at a delightfully low 1,750 rpm, and its torque peak is held longer than it was on the previous engine. The horsepower figure is enough to keep a GTI screaming along at highway speeds, but it’s the 273 lb-ft of torque that make the car such a joy to drive up, through, and along curving mountain roads.

Horsepower and torque are sent to the front wheels via either a standard six-speed manual transmission or Volkswagen’s seven-speed dual-clutch automatic transmission (which Volkswagen calls a DSG) with paddle shifters. Front-wheel drive is the only choice with a GTI; drivers wanting the improved capability and sure-footedness of all-wheel drive will need to look elsewhere or move up to the Volkswagen Golf R.

The EPA has estimated the 2022 Volkswagen GTI's fuel economy at 24 mpg city, 34 highway, and 28 combined with the manual transmission. Pick the dual-clutch automatic transmission, however, and you'll get a slight uptick to 25/34/28.

The high-performance Mk8 GTI benefits from a retuned suspension. The front assembly loses about seven pounds of weight, and the rear springs are 15% stiffer. Although these numbers certainly reflect a mechanical improvement, much of the GTI’s handling now comes courtesy of some exacting techno-wizardry.

Various drive modes let you dial in the GTI for Eco, Comfort, or Sport settings. A standard electronic torque-sensing limited-slip differential works in concert with the GTI’s electronic stability control (ESC) to help decrease understeer as it is piloted toward a corner. With a more neutral stance, the 2022 GTI can attack those corners more smoothly than before, and it accelerates through them with limited traction loss at the front tires. Tested on the country roads surrounding Asheville, North Carolina, the newest GTI handles corners with ease, provides outstanding power, and does it all without sacrificing a comfortable ride.

If your wallet affords you a top-tier Autobahn trim, you’ll benefit further from the DCC adaptive damping system. Capable of 200 adjustments per second, the Autobahn’s adaptive dampers adjust their rebound and compression rates, allowing drivers to charge even harder. 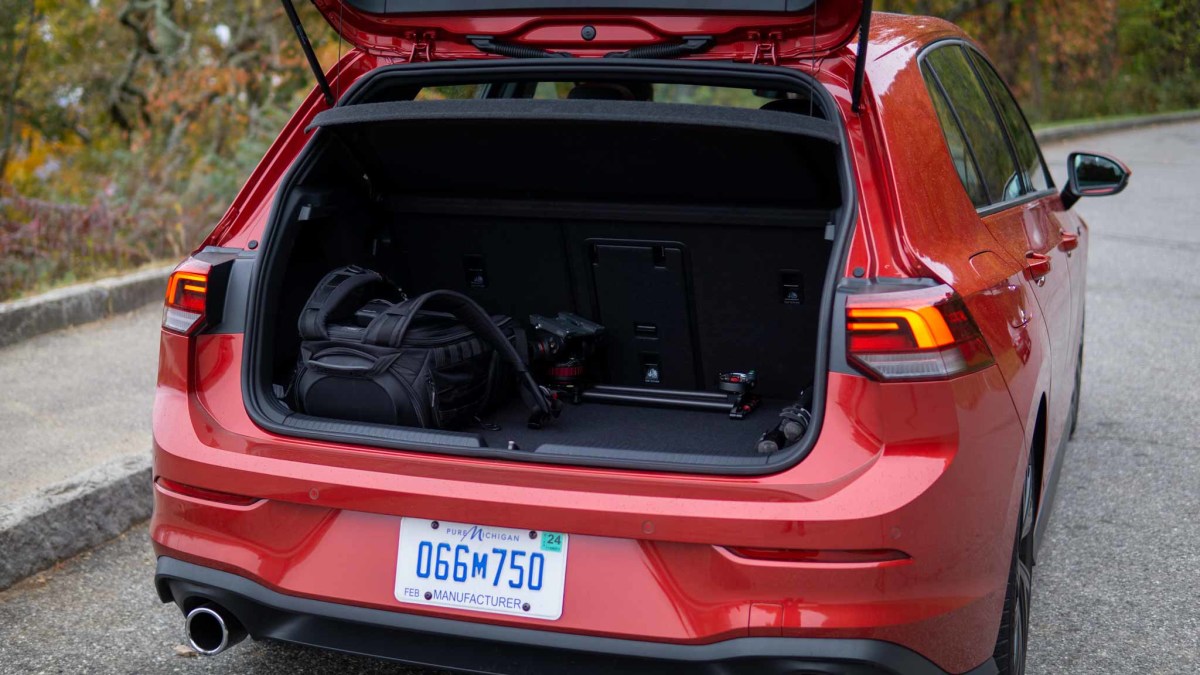 As the original hot hatch, the GTI has always lived at the intersection of performance and practicality. On the performance front, the Mk8 model certainly delivers. With 19.9 cubic feet of cargo space behind the back seat, it should suit the daily needs of most drivers, too. Thanks to a 60/40 split-folding rear seat, total cargo space measures 34.5 cubic feet, although that’s well short of one of its primary competitors: the Hyundai Veloster N.

The GTI is hugely driver-centric. Volkswagen angles the GTI’s center stack toward the driver's seat, and the automaker isn't afraid to eschew certain industry standards when it sees a better solution. Case in point: the GTI’s “light and sight” panel. Rather than fiddling with a stalk on the steering wheel and buttons on the dash, drivers in a new GTI can adjust their headlights and pick their defogging settings all from one simple panel located to the left of the steering wheel.

In the rear, legroom is great. Considering how easy the GTI is to maneuver, we expected to have our knees firmly pressed into the backs of the front seats. Instead, we were pleasantly surprised by the GTI’s rear-seat comfort. Assuming you’re not in the business of transporting washing machines, the GTI looks perfectly capable of transporting a family of four on a regular basis. 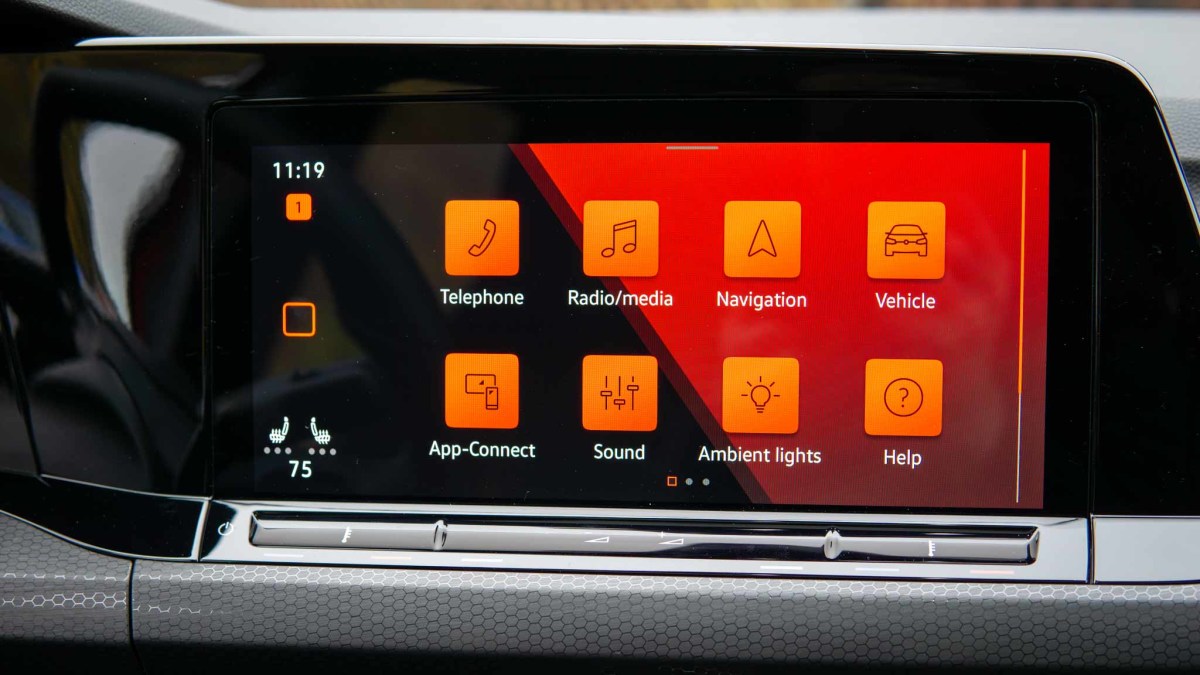 A stunning, fully digital driver information display headlines the 2022 Volkswagen GTI’s best technological features. With three primary gauge displays, you can choose what you want, and where. Speedometer in the middle, G-force meter on the right, transmission gear readout on the left? No problem. Prefer the tachometer in the middle, fuel economy on the left, and audio on the right? You can do that, too. Want to change the color? Well, selecting one of the GTI’s standard 30 ambient lighting profiles changes the displayed color on the car’s screens, too.

The driver information display spans 10.25 inches and comes standard on all trims. To its right sits the rest of the GTI’s infotainment system. The centerpiece of the car's interior is an 8.25-inch touchscreen display in the S trim and a 10-incher with navigation in the SE and Autobahn trims. You'll find Android Auto and Apple CarPlay, along with Bluetooth connectivity. Crisp graphics and a dedicated “Home” icon make the system relatively easy to read and navigate, and the 9-speaker Harmon Kardon sound system in the SE And Autobahn trims sounds good. As was the case in the Volkswagen ID.4, however, the touch-capacitive volume and climate controls that sit just below the touchscreen are a bit maddening.

Volkswagen runs much of its infotainment technology through its proprietary Car-Net system. Car-Net has a few iterations, but, frustratingly, they’re not all included as cost-free equipment. Remote Access gives you a view of the vehicle’s location and fuel level, and it lets you unlock and lock your GTI from your smartphone—and it’s free for five years. Safe and Secure, which is an emergency assistance feature like GM’s OnStar, costs $159 per year. And with Hotspot—which is not available on the S trim—you can add WiFi capability to your GTI, either by setting it up as an additional line on your existing Verizon or T-Mobile account or by paying Volkswagen $20 per month for unlimited data.

These extra-cost features are undoubtedly helpful, and few (if any) automakers offer them free of charge. Volkswagen goes a step further, however, with some additional options at bewilderingly low costs.

Car-Net Plus Nav provides map updates and fuel prices to the navigation system for $49 per year. Adding Plus Speech provides natural language controls… for a whopping $9 per year. Finally, Plus Online Radio delivers online internet radio for an extra $8 per year. Considering the inconsequential prices, these feel like exasperating money-makers. 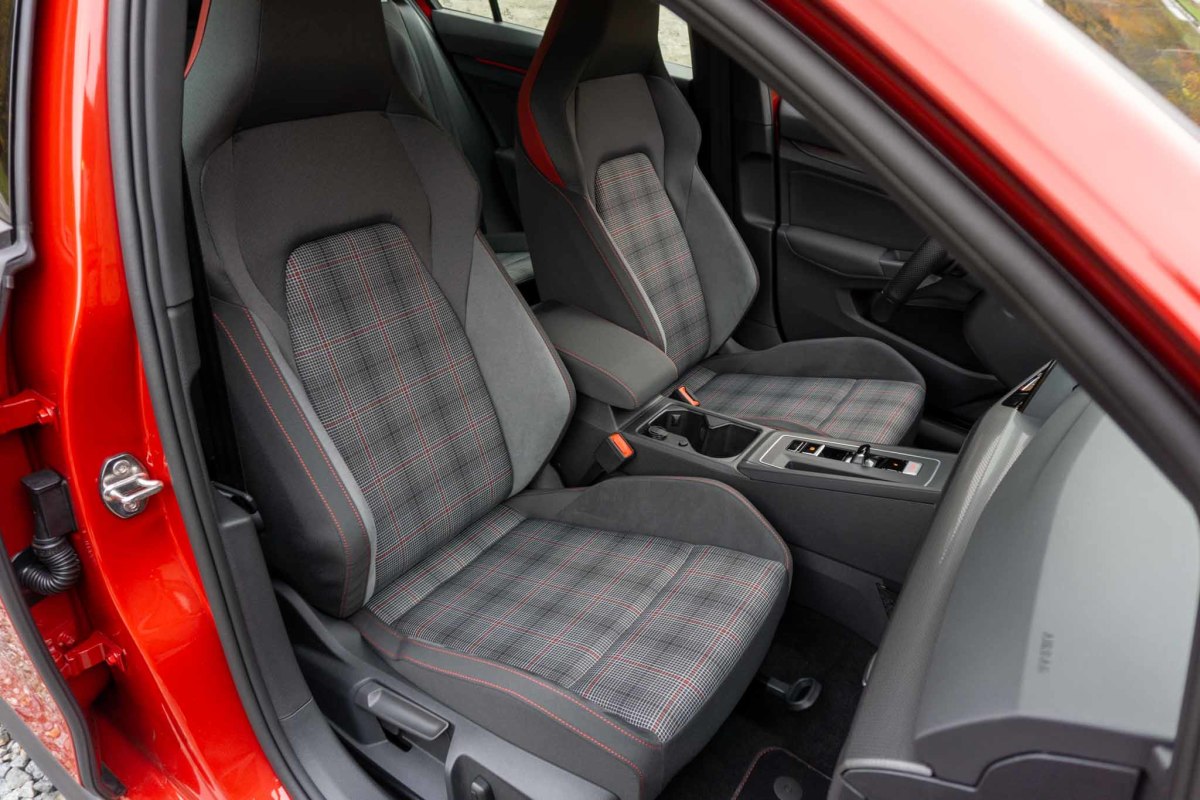 Unfortunately, IQ.Drive is only available on automatic GTIs. Manual-transmission cars don’t benefit from this system.

Volkswagen’s Park Distance Control feature, however, is a standard feature on all GTI trims. Using parking sensors in the front and rear bumpers, the GTI can let you know if you’re getting too close to a car up ahead or behind you. Upgrade to an Autobahn trim and this feature pairs with the GTI’s available Park Assist technology to automatically slot into parallel and perpendicular parking spaces.

As is typically true of brand-new, redesigned vehicles, neither the National Highway Traffic Safety Administration (NHTSA) nor the Insurance Institute for Highway Safety (IIHS) has crash-tested the 2022 Volkswagen GTI. 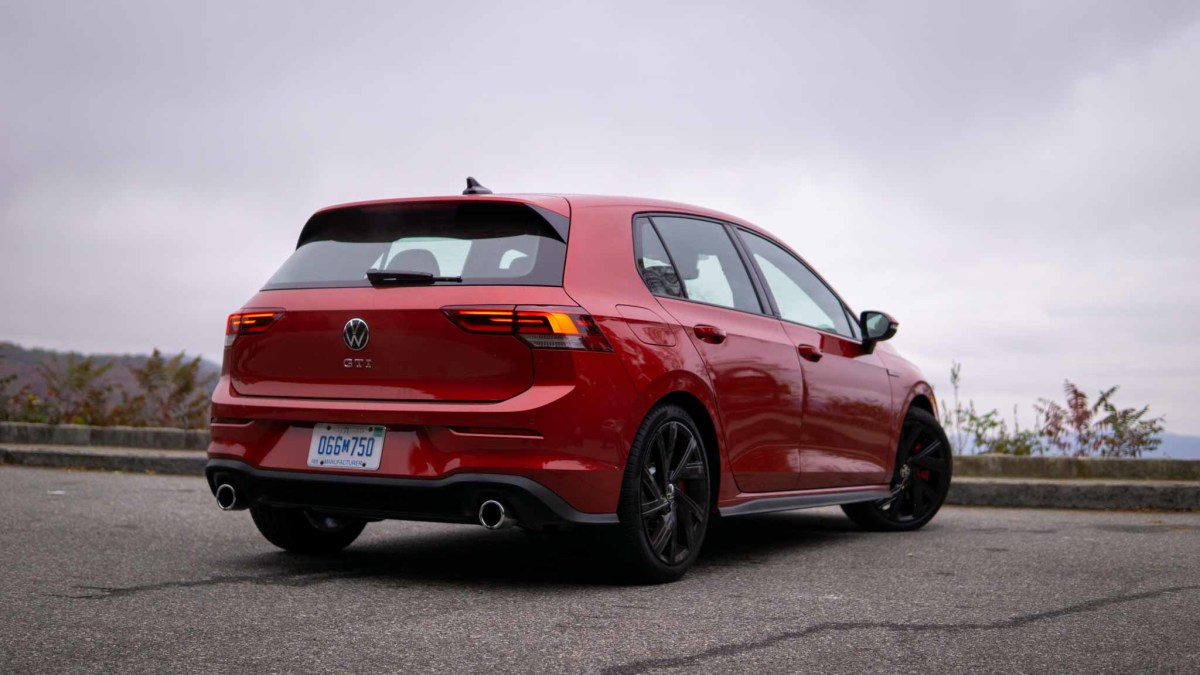 With a starting price of $29,545, the GTI looks like a brilliant choice, but it’s worth noting how quickly that price tag can climb. Every GTI is subject to a $995 destination fee, effectively bringing that starting price north of $30K. Add another $800 if you want the seven-speed DSG—now you’re looking at $31,340 for a GTI S without a stick. The same math applies to the SE and the Autobahn, starting at $34,295 and $37,995, respectively. Tack on your registration costs, and a brand-new Autobahn can run you over $40K. At that price, most VW fans start thinking about a Golf R.

Now, it’s worth detailing that as the market evolves, it appears that fewer and fewer shoppers are interested in this type of car. In fact, if you take the brilliant engine and most of the other go-fast bits out of a GTI, it doesn’t look like it appeals to shoppers at all. The VW Golf—the car the GTI has been based on since it was called the Rabbit in its first generation—was discontinued for the 2022 model year (the Golf R is still with us). In the Golf's place, effectively, lives the Volkswagen Taos, a compact crossover. For drivers who put size and practicality above all else, it's a sea of crossovers and SUVs.

But for those drivers who do value the driving experience as much as they value practicality and family-friendly functionality, the GTI still reigns supreme. Although competitors like the Hyundai Veloster N may put a bigger smile on some faces, the new-generation GTI excels at meeting everyday needs while delivering genuinely useful proportions and blistering performance.

What's your take on the 2022 Volkswagen Golf GTI?

Have you driven a 2022 Volkswagen Golf GTI?
Rank This Car

Enter your zip to see incentives for a new Golf GTI in your area.