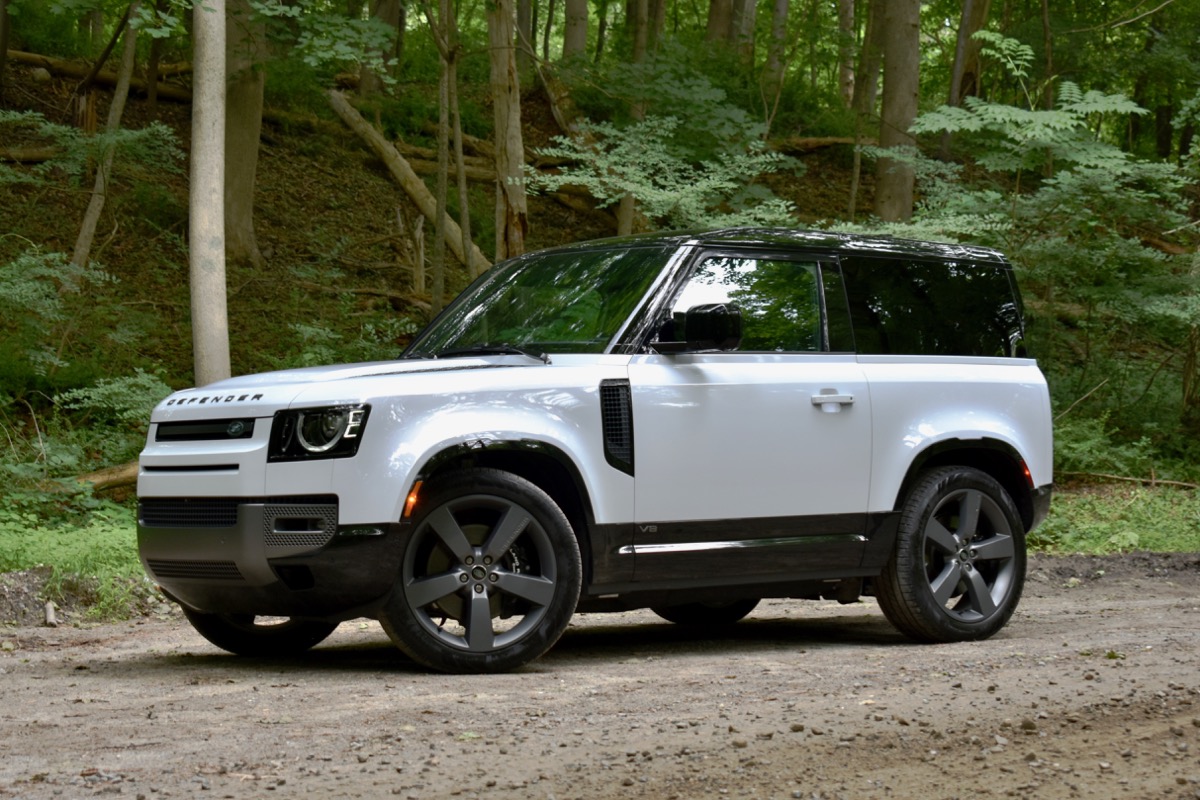 Looking for a New Land Rover Defender in your area?

The Defender combines the capability and style of a traditional off-roader with modern tech and road manners. 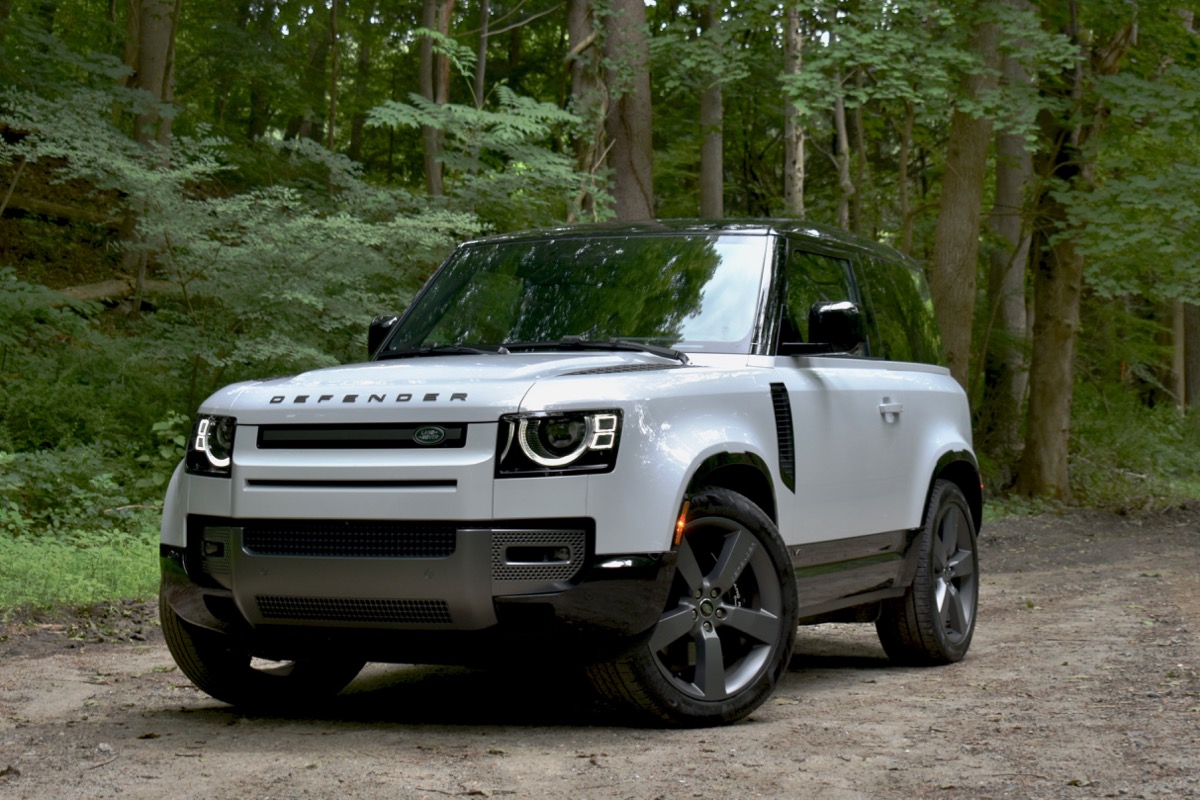 As other Land Rover models got more luxurious, the original Defender carried on as a rugged, basic off-roader. While Land Rover stopped selling the old school Defender in the United States during the 1990s, it remained in production for other markets until 2016. By that time, Land Rover was already planning a clean-sheet redesign that brought the Defender back to the U.S. for the 2020 model year.

The new Land Rover Defender contrasts the automaker’s other models, like the Discovery and Range Rover, with an emphasis on ruggedness. It’s still bigger and cushier than the original Defender, but less fancy than its sibling models. And like the original Defender, the new model is available in two-door 90 and four-door 110 body styles. A three-row, eight-seat Defender 130 body style is also on the way for the 2023 model year.

Meanwhile, changes for the 2022 model year include a new optional 11.4-inch touchscreen, standard wireless phone charging, and an expansion of trim levels. The Defender 90 gets new X-Dynamic SE and X-Dynamic HSE trims, and a new V8 powertrain option debuts for both the 90 and Defender 110 in both standard and high-end Carpathian Edition models. Shared with other Jaguar Land Rover products, the supercharged 5.0-liter V8 provides a serious boost in performance. We sampled it in a Defender 90 for this review. 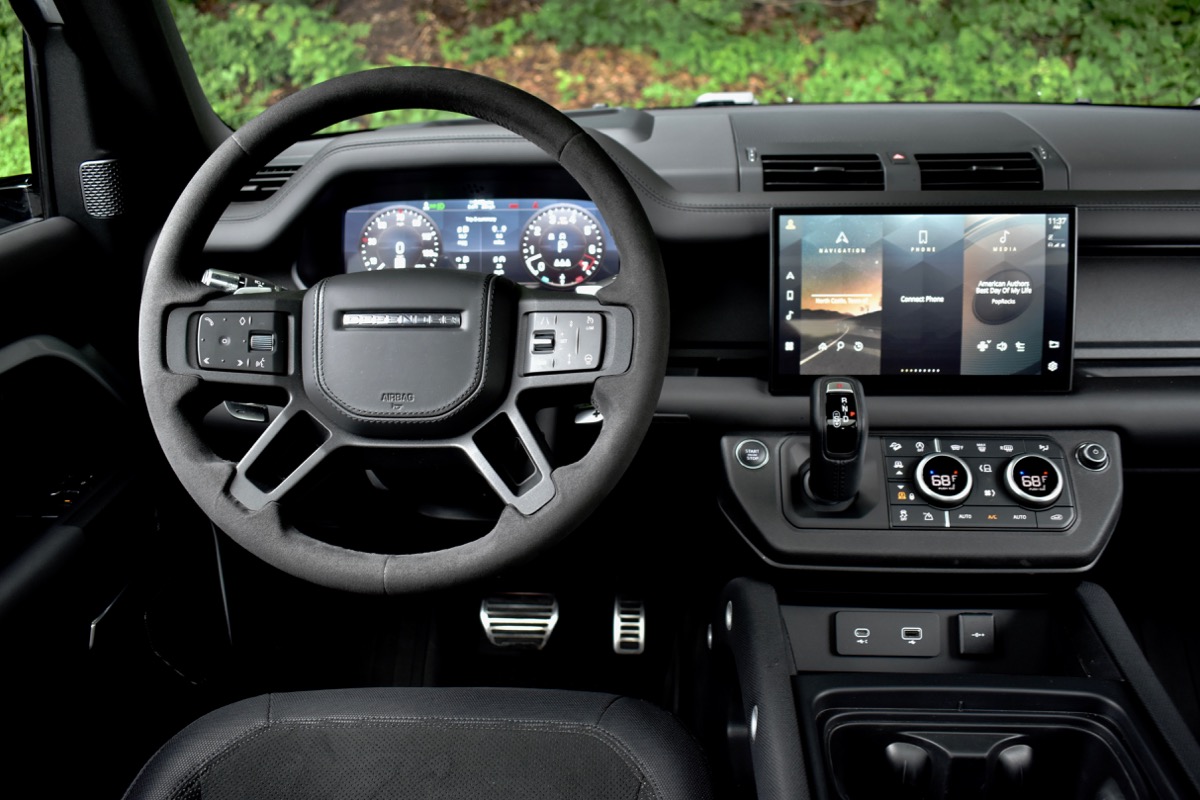 The Defender doesn’t get any major exterior styling changes for 2022, but it remains distinctive. The boxy profile, tailgate-mounted spare tire, and flat hood visually tie the 2022 Defender to the original version, and the classic Series Land Rovers that preceded it. You can even spec a white contrasting roof and steel wheels to up the retro factor.

Those callbacks aside, though, this is a thoroughly modern design. Rounded corners acknowledge the importance of aerodynamics in modern car design, while recessed LED headlights give the Defender a distinct personality. The modern Defender is also much larger than the original version, which pays dividends in interior space and ergonomics.

The original Defender is romanticized for its simplicity, but it was also fairly cramped, with an upright driving position more akin to a tractor than an SUV. The modern Defender is more generous with headroom and legroom, and has a more comfortable driving position that still allows good outward visibility.

The interior design also plays up the Defender’s rugged character without seeming cheesy. While most luxury automakers cover every surface in leather, wood, and plastic, Land Rover wasn’t afraid to leave some bare metal and exposed screws in the door for a different kind of look, along with nice metal trim for the steering wheel. Even our high-end Defender 90 V8 test car had a mix of leather upholstery and suede, which looked like it would handle mud and dirt better than the traditional all-leather approach. One might think twice about taking a Range Rover off-road and ruining the interior, but that’s not a concern here. 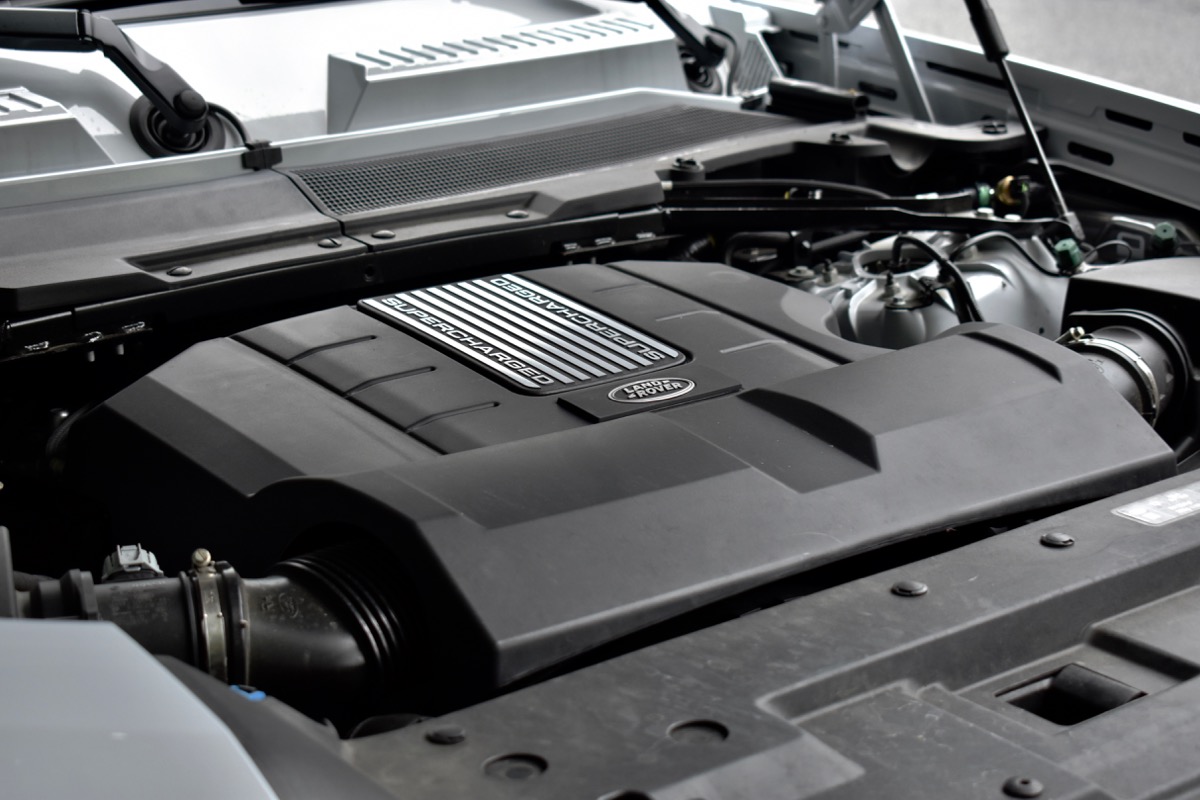 The aforementioned V8 joins two carryover powertrains for 2022. Base models get a 2.0-liter turbocharged four-cylinder engine producing 296 horsepower and 295 pound-feet of torque. The mid-level option is a 3.0-liter turbocharged inline-six mild-hybrid powertrain rated at 395 hp and 406 lb-ft. All Defender models use a ZF eight-speed automatic transmission, with standard four-wheel drive (4WD) with a two-speed transfer case.

The four-cylinder and six-cylinder powertrains provide adequate power, but if you want something more than adequate, go for the new-for-2022 V8 engine. Producing 518 hp and 461 lb-ft of torque, it can get the Defender 90 from zero to 60 mph in 4.9 seconds, and up to a top speed of 149 mph, according to Land Rover (expect 110 models to be slightly slower). And while the other powertrains are refined and unintrusive, the V8 is a riot. Bury your right foot and the Defender will rear up as it accelerates, accompanied by a glorious bellow from its quad exhaust tips.

V8 models also get an electronic active rear differential, Dynamic drive mode, and unique transmission and suspension tuning, the latter including model-specific spring and damper rates. According to Land Rover’s press materials, this was done to provide sportier handling in line with the V8’s extra power. But overall the Defender 90 V8 felt less poised than the six-cylinder model, bringing the wrong kind of drama to cornering.

Still, for a dedicated off-roader, the Defender was impressively comfortable on the pavement. The suspension absorbed bumps as well as in Land Rover’s more luxury-oriented models and noise from the massive 22-inch tires was effectively blocked. Despite its boxy shape, the Defender also seemed less susceptible to crosswinds than a Jeep Wrangler. The Wrangler and other hardcore off-roaders comprise on-road driving dynamics to achieve their off-road ability, but that’s not the case with the Defender. We would gladly drive one everyday and everywhere.

While we didn’t get a chance to take our Defender 90 V8 test car off-road, past experience with other models showed that the Defender lives up to Land Rover’s reputation. The Defender has all of the ingredients, including a 4WD system with low range, good approach, departure, and breakover angles, and lots of ground clearance (up to 11.5 inches with the optional air suspension at its off-road height). The optional Terrain Response 2 system includes drive modes for different surfaces, while All-Terrain Progress Control acts as low-speed off-road cruise control.

An 8,201-pound maximum towing capacity is also more than many other similarly sized luxury SUVs offer. 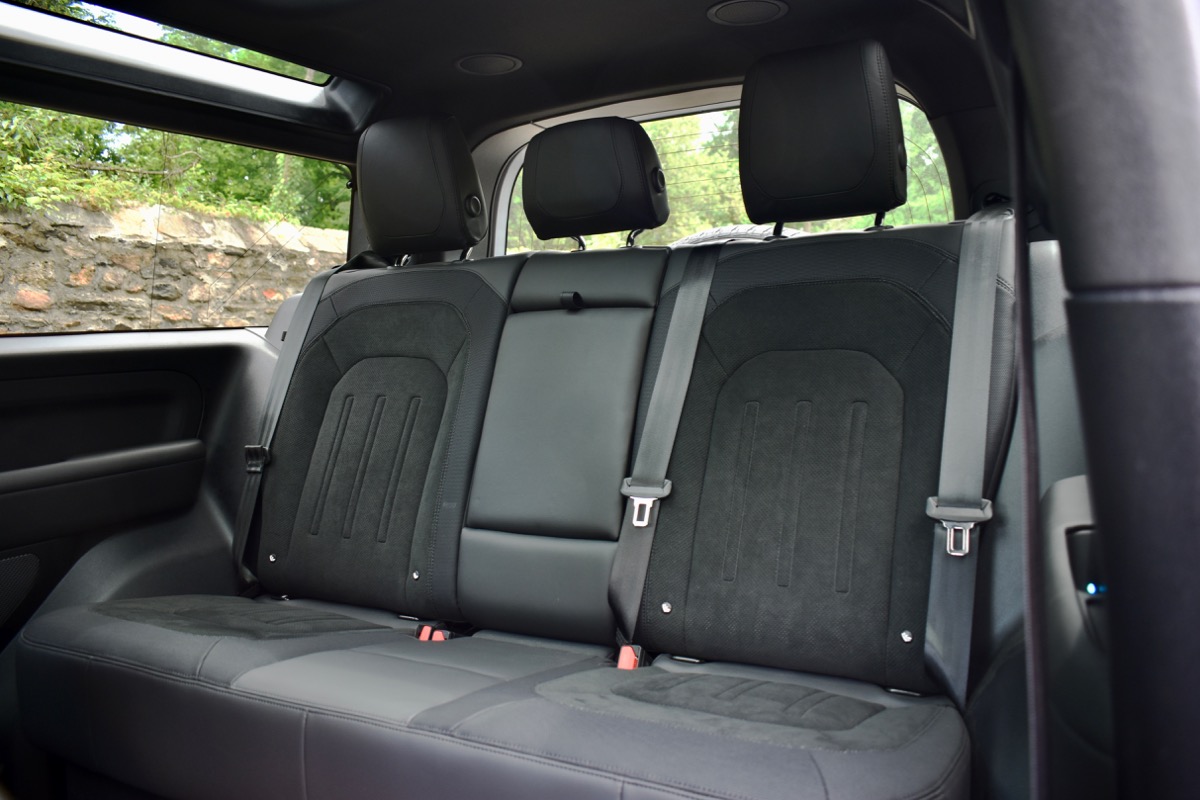 All Defender models get 40/20/40 split-folding rear seats, and we found them to be surprisingly comfortable in our Defender 90 test vehicle. However, as with all two-door vehicles, accessing them was a bit of a chore, and they don’t leave much room for cargo space. The fact that the rear seats are usable at all is impressive, though, and you can always fold them down for more cargo space. It’s not a bad tradeoff for the classic styling of the Defender 90, and the greater off-road nimbleness afforded by its shorter wheelbase.

Land Rover’s interior design also emphasizes functionality. The shifter and climate-control knobs are placed on a shelf extending from the dashboard, leaving room for a large caged storage space below. That also makes the controls easy to reach from the driver’s seat. The center-console storage bin is one of the biggest we’ve seen outside a full-size pickup truck, and can be equipped with refrigeration. You can also ditch it entirely and add a jump seat between the front seats.

Thanks to grainy footage of old Land Rovers traversing the wilderness with gear strapped to their hoods and roofs, we’re conditioned to think Defenders should carry cargo on the outside as well as the inside. Land Rover indulges that with an optional basket-style roof rack and cargo boxes that mount to the side pillars. We’d be afraid of forgetting whatever items are left in those boxes, though. 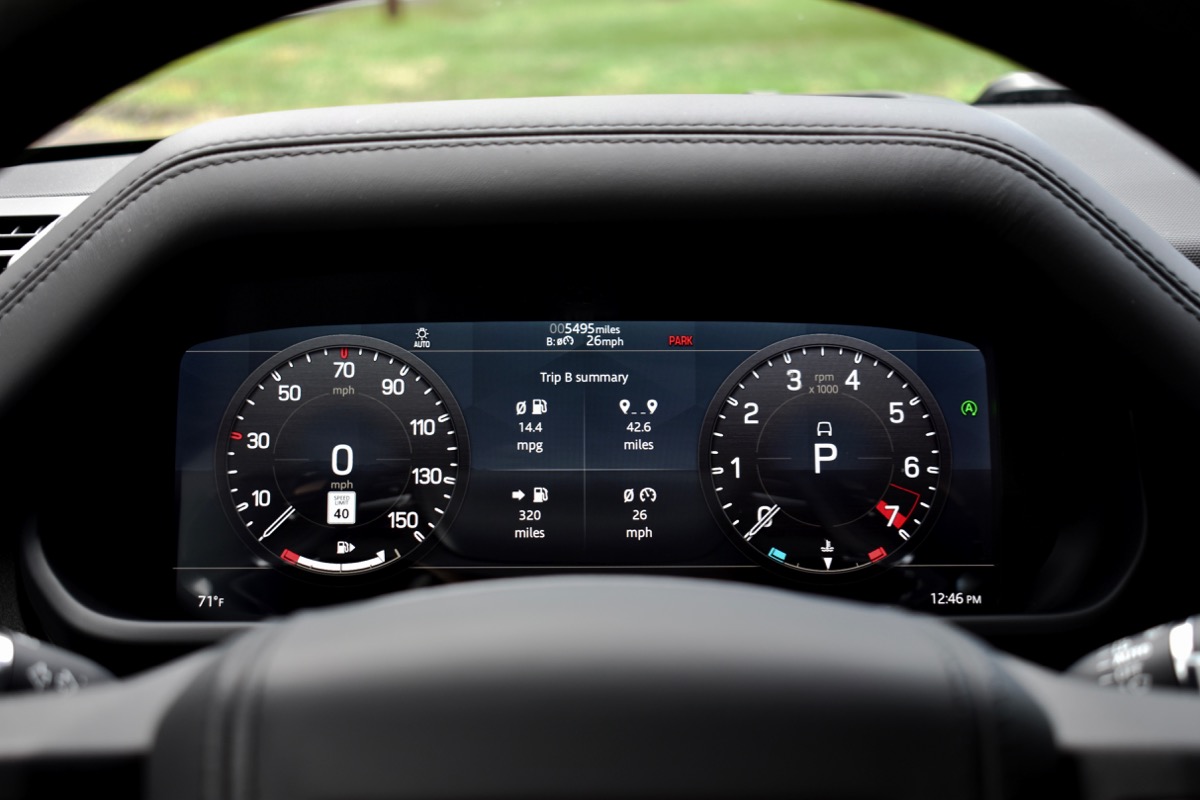 The standard Pivi Pro infotainment system includes a 10-inch central touchscreen and wireless Apple CarPlay/Android Auto connectivity. A 12.3-inch digital instrument cluster is also standard on every trim level except the base model. As mentioned above, an 11.4-inch touchscreen is newly available for the 2022 model year.

The difference between the two central touchscreens isn’t dramatic, as the base screen isn’t exactly small. Land Rover’s user experience designers also did a good job on the graphics and menu layouts. We generally found it easy to find things, and the palette of muted, cool colors gives the interface a distinctive look. However, in our experience the screen required more than a mere touch to work. Only a strong poke would get it to respond.

Optional features include a 14-speaker Meridian audio system, head-up display, and a surround-view camera system that really comes in handy when off-roading. Side camera views can help supplement the mirrors and show how close you are to obstacles, while the front view is great for spotting rocks or tree stumps that might be on your chosen driving line. 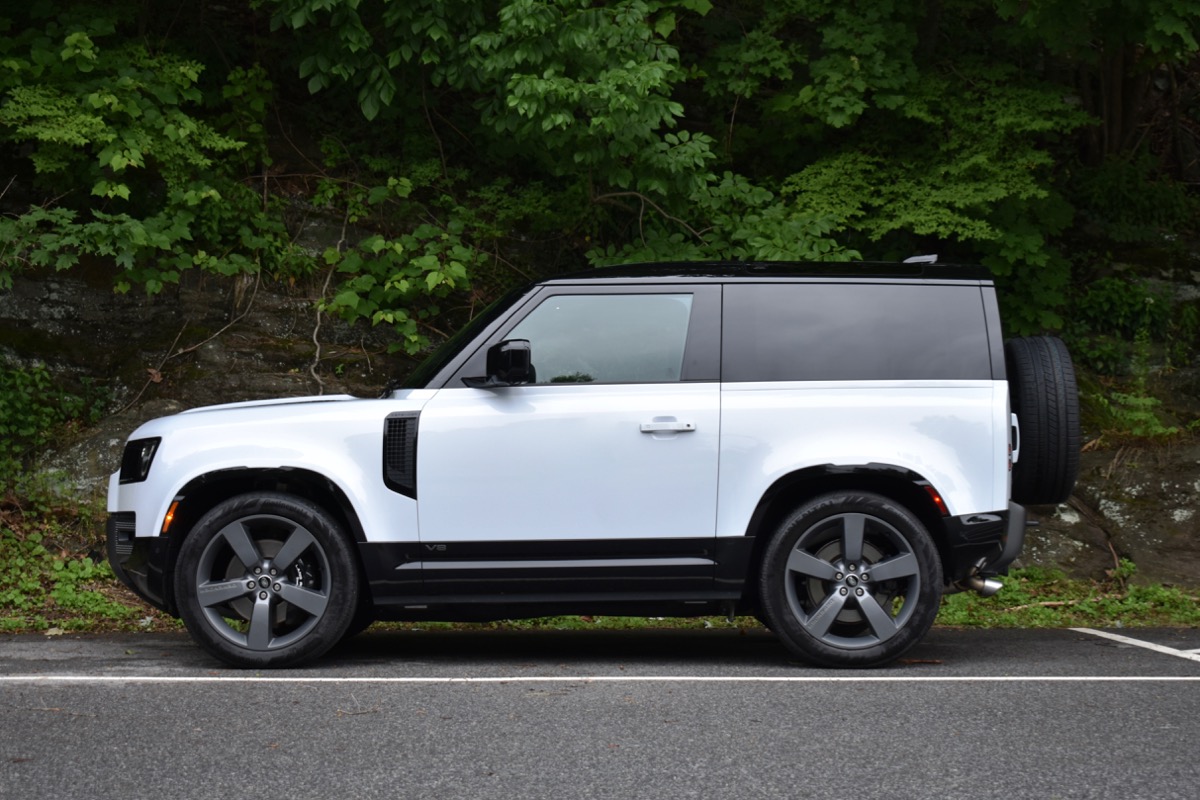 While some SUVs from non-luxury brands offer these features as standard equipment, Land Rover is not the only luxury brand to be stingy with standard driver-assist tech. You won’t find standard adaptive cruise control on most BMW or Mercedes-Benz SUVs either, for example. 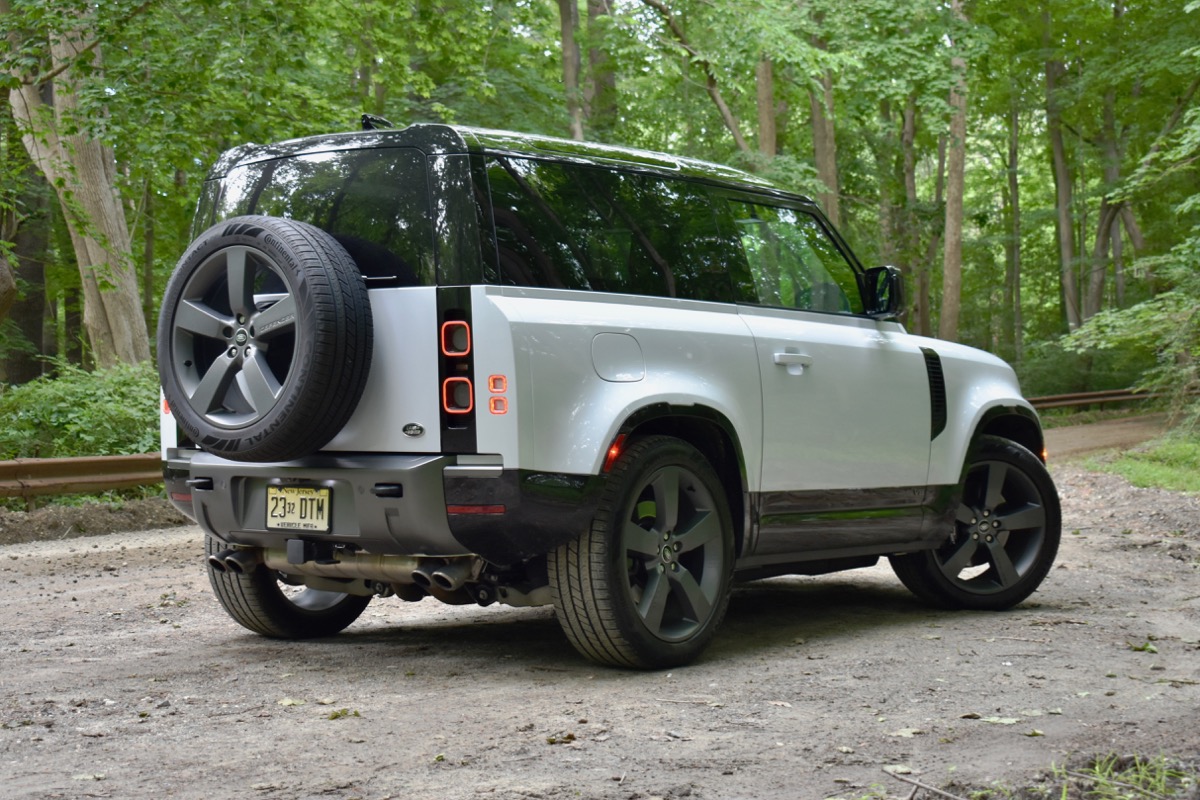 The base four-cylinder Defender 90 gets EPA-rated fuel economy of 19 mpg combined (18 mpg city, 21 mpg highway); the 110 version loses 1 mpg in all three categories. With the six-cylinder mild hybrid powertrain, the Defender is rated at 19 mpg combined (17 mpg city, 22 mpg highway) in both 90 and 110 guises. So while the mild hybrid cancels out the gas mileage penalty of a larger engine, it’s not a true step up in efficiency.

V8 fuel economy reminds us why automakers have largely moved on from these powerful yet thirsty engines. The Defender 90 V8 is rated at 16 mpg combined (15 mpg city, 19 mpg highway). The combined and highway ratings carry over to the 110 V8, which gets a 14 mpg city rating. We averaged 17.4 mpg in our Defender 90 V8 test car, according to the trip computer estimate.

With so many combinations of body style, powertrain, and trim level to choose from, Defender pricing can vary greatly. The base price of $49,120 buys a Defender 90 with steel wheels and a turbo-four engine (all prices include a $1,350 destination charge). But our Defender 90 V8 test car had an MSRP of $106,710.

It’s worth noting that V8 models get nearly every optional feature from the lower trim levels, including an upgraded Meridian audio system, 22-inch wheels, and the full array of driver-assist features. In fact, the only options on our test car were the larger infotainment touchscreen, an interior protection and storage package, and Yulong White paint.

Given Land Rover’s status as a luxury brand, some of those options—particularly the driver-assist features—should really be standard across the board. But the Defender still offers a lot of capability for the money. Skip the V8 and you still have a hardcore off-roader with the road manners of a luxury car.

A loaded Jeep Wrangler Rubicon, Ford Bronco Wildtrak, or Toyota 4Runner TRD Pro will come close to the Defender’s base price, but none are as nice to drive on the road or as functional in everyday use. And most other luxury SUVs from the likes of Audi, BMW, or Mercedes can’t match the Defender’s off-road capability. That combination of ruggedness and refinement makes the Defender a compelling choice.

What's your take on the 2022 Land Rover Defender?

Esme Hi I like your car a lol much

Have you driven a 2022 Land Rover Defender?
Rank This Car

Enter your zip to see incentives for a new Defender in your area.