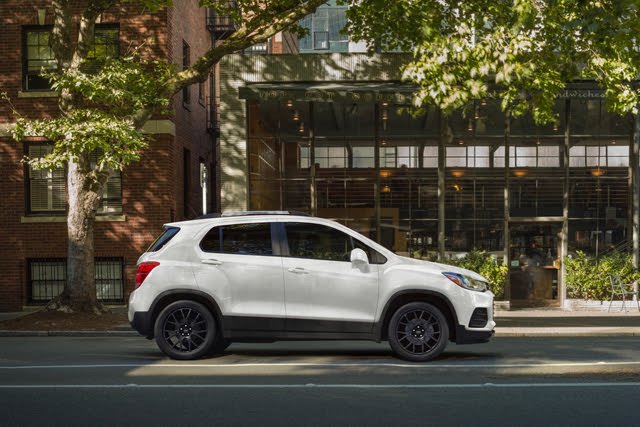 Looking for a New Chevrolet Trax in your area?

The Chevrolet Trax is a subcompact crossover often cross-shopped against the Hyundai Venue, Ford EcoSport, Kia Soul and Nissan Kicks. For 2022, the Trax sees some mechanical updates.

You’ll feel the improvements most keenly with the engine. The Trax's 1.4-liter turbocharged inline-four has been stoked to 138 horsepower and 177 pound-feet of torque, improvements of 17 hp and 29 lb-ft, respectively. This engine is backed by the same six-speed automatic transmission as its predecessor was, and it returns 24 city, 32 highway, and 27 combined MPG in the standard front-wheel-drive (FWD) configuration. The optional all-wheel-drive (AWD) version manages 23 city, 30 highway, and 26 combined.

From there, you can also outfit the Trax with a few packages. The LT Convenience Package adds a six-way power driver’s seat, keyless access and keyless start, and a leather-wrapped steering wheel. The Premium Seat Package gets you full leatherette upholstery and heated front seats. The Redline Edition, Midnight Edition, and Sport Edition packages all enhance the Trax’s exterior looks.

On the topic of safety, the Trax’s only standard features are a rear-view camera and a complement of 10 airbags. Everything else—rear parking sensors, rear cross-traffic alert, and blind-spot monitoring—is available standalone, or all at once with the Driver Confidence Package. There are no crash-prevention technologies.

The National Highway Traffic Safety Administration (NHTSA) last tested the Trax in 2015 and gave it a five-star rating. The Insurance Institute for Highway Safety (IIHS) gave the 2022 Trax top “Good” ratings in most crash tests, except the small overlap front passenger side and side-impact tests, where the Trax received a lower “Acceptable” rating.

The Trax is a competent subcompact crossover, but there’s not much to recommend it over its equally competent or better cohorts, such as Chevrolet’s own Trailblazer.

What's your take on the 2022 Chevrolet Trax?

Have you driven a 2022 Chevrolet Trax?
Rank This Car

Enter your zip to see incentives for a new Trax in your area.