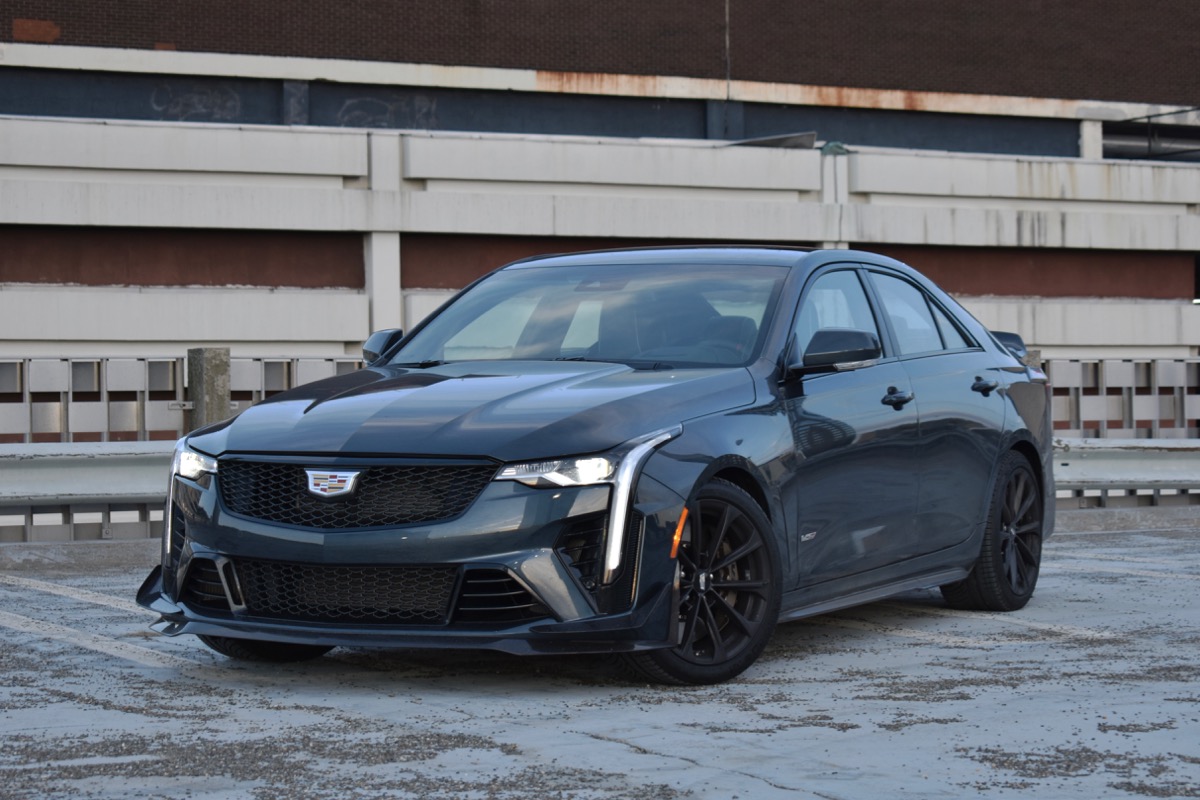 Looking for a New Cadillac CT4-V Blackwing in your area?

For 2022, the CT4 achieves its full potential with a new Blackwing performance model. 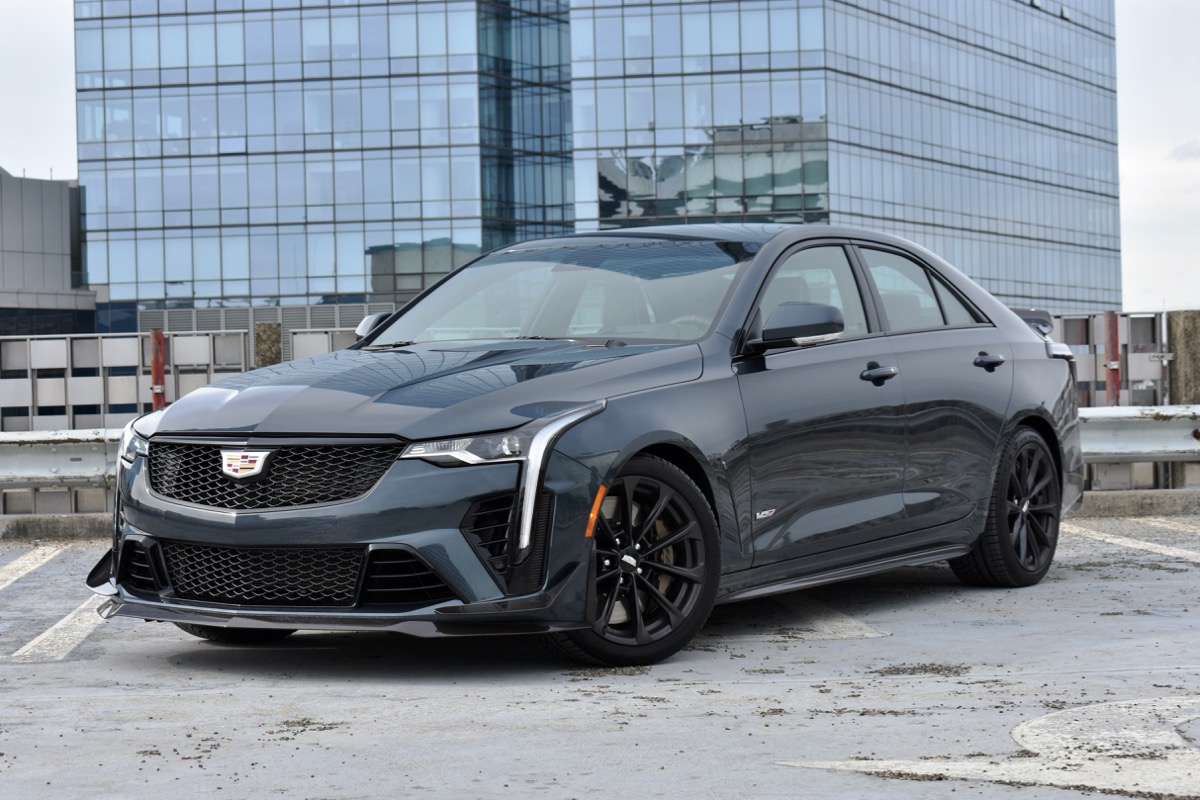 Cadillac has spent over two decades trying to reshape itself in the image of the German luxury automakers, blending its traditional focus on comfort and amenities with performance. The 2022 Cadillac CT4 is the end result of that transformation.

The CT4 is the latest in a long line of Cadillac sedans, stretching back to 1997’s Catera, that have tried to embody the sporty handling characteristics of their German counterparts. Introduced for the 2020 model year as the replacement for the Cadillac ATS, the CT4 sits below the Cadillac CT5 in size and price.

As the smaller, lower-priced model, the CT4 is aimed at the heart of the sports sedan marketing, competing against the BMW 3 Series, Mercedes-Benz C-Class, and Audi A4, as well as Asian rivals like the Acura TLX, Genesis G70, Lexus IS, and Infiniti Q50, as well as the Alfa Romeo Giulia.

The big news for 2022 is the addition of a CT4-V Blackwing high-performance model to the lineup, with more power, an available manual transmission, and race car-style aerodynamic elements. It’s Cadillac’s answer to hardcore sports sedans like the BMW M3, Mercedes-AMG C63, and Alfa Romeo Giulia Quadrifoglio.

The Blackwing sits atop the CT4-V and the base Luxury, Premium Luxury, and Sport trim levels. Those other models carry over essentially unchanged, so we grabbed the key fob to a Blackwing for this review. 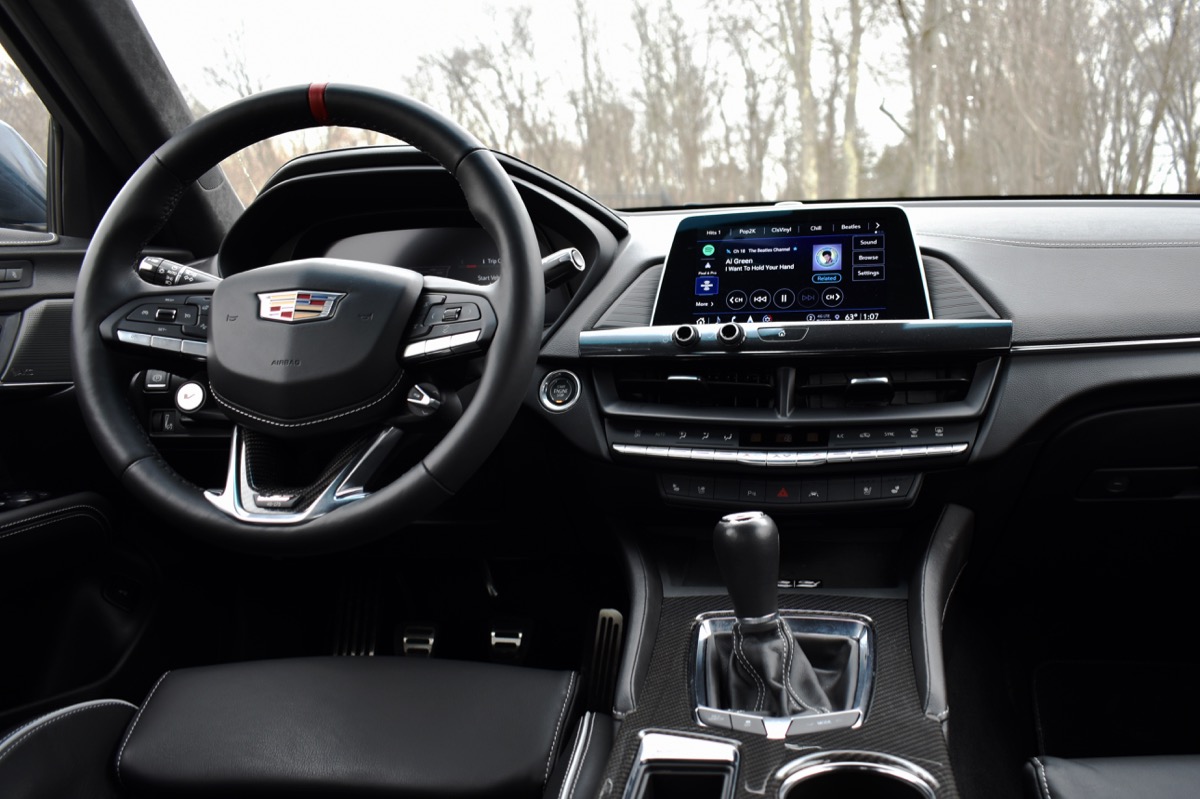 The CT4’s exterior styling gives us the impression that Cadillac’s designers have run out of ideas. Cadillac radically changed its look with the Cyberpunk-esque first-generation CTS sedan, and gradually refined it to a balance of restraint and distinctiveness. The old ATS looked like a Cadillac but was still handsome. The main design differences for the CT4 are fussy add-ons like the elongated LED daytime running lights and more complex sheetmetal surrounding the taillights, that just make the design fussier. Unlike the ATS, there is not coupe version of the CT4.

As with other Cadillac models, the CT4 gets different styling elements depending on whether you select the Sport or Premium Luxury trim level. The former gets dark trim, nickel-finished 18-inch wheels, a sportier-looking front fascia, and a small rear spoiler. The Premium Luxury gets bright chrome trim and 18-inch wheels.

The CT4-V and CT4-V Blackwing also get model-specific styling elements to aid cooling and aerodynamics. The Blackwing’s optional Carbon Fiber 1 and Carbon Fiber 2 Packages add some serious aerodynamic hardware, including a large ducktail rear spoiler, dive planes, side-sill extensions, front splitter, and rear diffuser. These items aren’t for show; Cadillac claims they were developed with lessons learned from racing, and they produce real aerodynamic downforce that will improve performance on a track.

The interior doesn’t make a particularly strong design statement and, even dressed up with our Blackwing tester’s optional carbon fiber trim, leather upholstery with white piping, and “performance” steering wheel, it didn’t feel particularly luxurious. Most of the materials felt fairly low-rent, although that’s a criticism we could apply to many competitors as well. 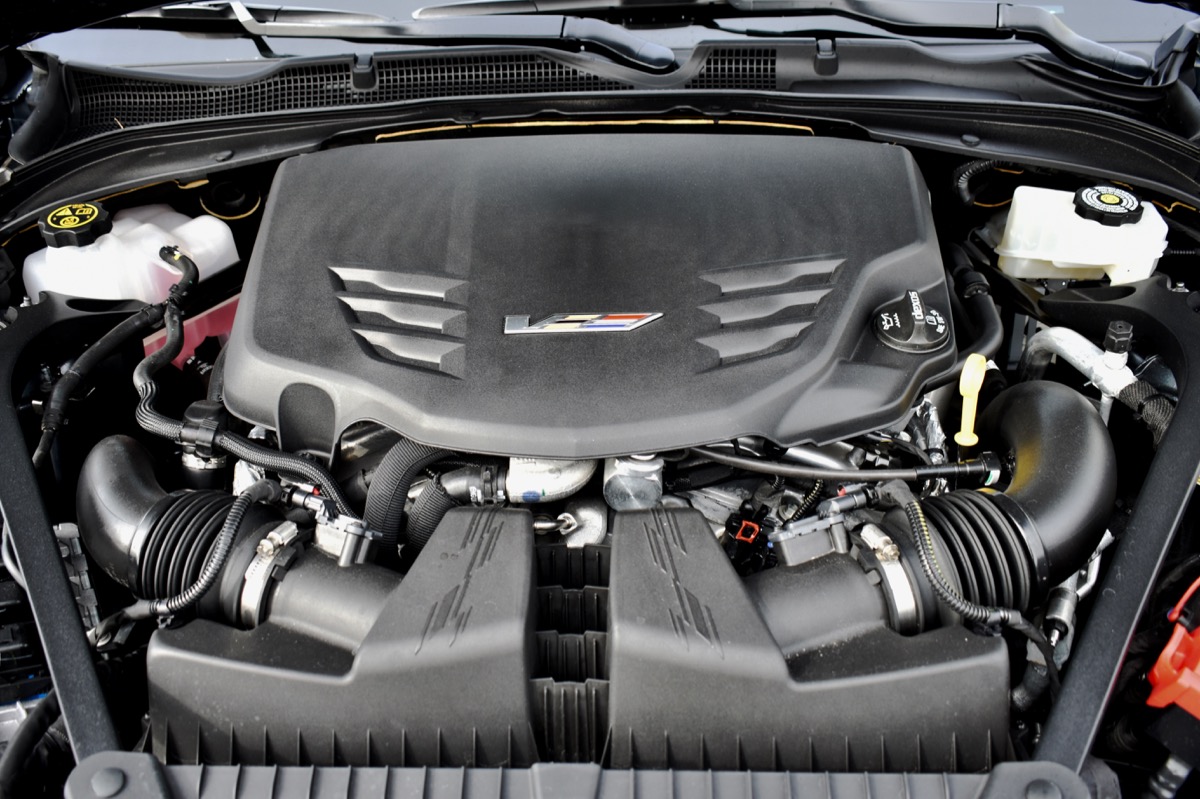 Cadillac offers several levels of performance. Entry-level models get a 2.0-liter turbocharged four-cylinder engine making 237 horsepower and 258 pound-feet of torque, coupled to an eight-speed automatic transmission. CT4 Premium Luxury models can be equipped with a 2.7-liter turbo-four producing 310 hp and 350 lb-ft of torque, with a 10-speed automatic transmission. Both powertrains are available with rear-wheel drive (RWD) or all-wheel drive (AWD).

The Cadillac CT4-V gets a higher-output version of the 2.7-liter engine, producing 325 hp and 380 lb-ft of torque. This model gets the same 10-speed automatic as the Premium Luxury, and is also available with RWD or AWD.

If performance is really the priority, though, the Blackwing is the answer. This hardcore performance model gets a 3.6-liter twin-turbo V6 producing 472 hp and 445 lb-ft of torque. For the purest driving experience, the Blackwing is only available with RWD, and it’s available with a six-speed manual transmission (a 10-speed automatic with paddle shifters is also available). Cadillac says the CT4-V Blackwing will do zero to 60 mph in 3.8 seconds (with the automatic transmission) and reach a 189-mph top speed.

The Blackwing also gets Magnetic Ride Control 4.0 adaptive suspension, Brembo brakes, and a model-specific electronic limited slip differential. With these specs, it shouldn’t be surprising that the Blackwing is fantastic to drive. But what did surprise us was just how much fun and characterful this Caddy was to pilot. It felt alive and involving, which isn’t always the case with modern sports sedans. Modern technology makes it easy to extract performance from a car, but often at the expense of a memorable experience. That’s not the case here.

Even in its least-sporty setting, the steering was delicate and provided plenty of feedback. The twin-turbo engine was a tower of torque, but was still eager to rev, making it very entertaining to run up through the gears. The suspension was even fairly supple for a performance car, although the ride quality was far from cushy. It all adds up to a car that’s enjoyable to drive even at normal speeds. 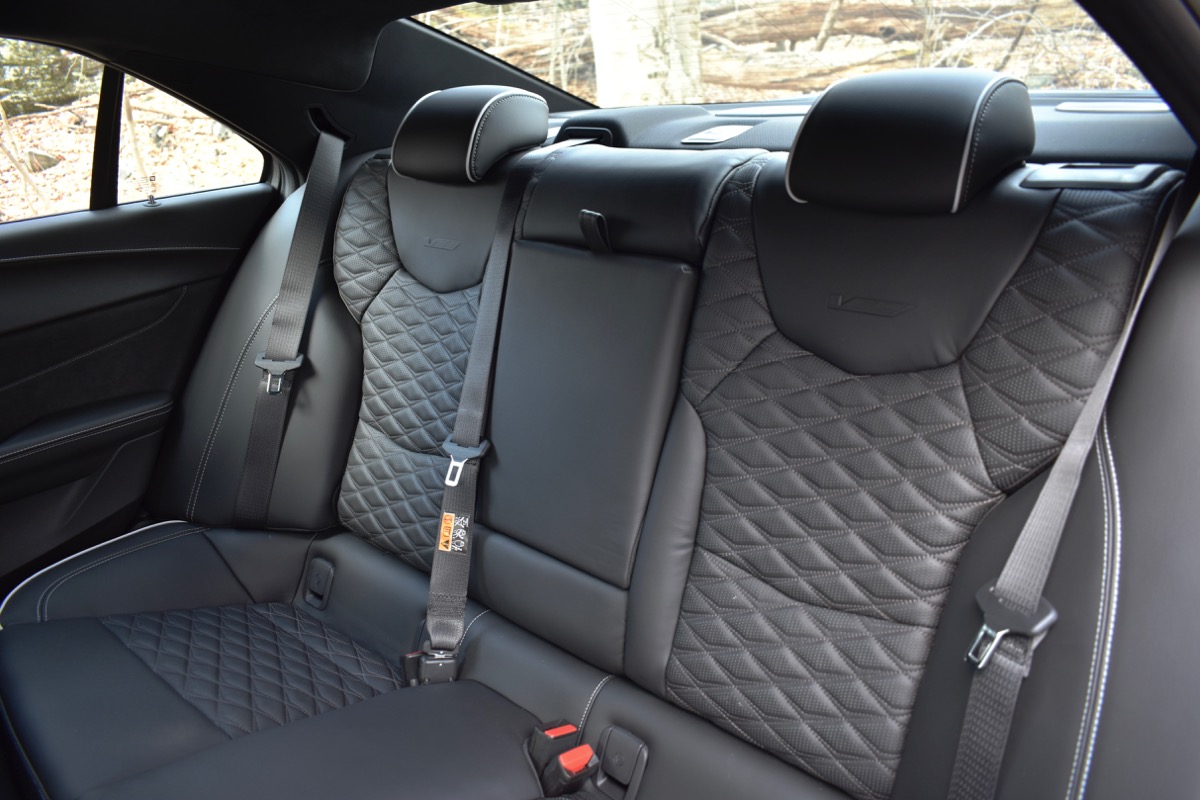 Like other sedans in this segment, interior space isn’t exactly generous. If you want more room, your local Cadillac dealer will happily show you a CT5 (or CT5-V Blackwing). But the CT4 does compare well to its rivals.

We did like our Blackwing test car’s heavily bolstered front seats, which were quite comfortable despite their sporty design (and featured heating and ventilation to boot). In contrast to the bunker-like feel of some sedans, the CT4’s low window sills and fairly upright windshield provided excellent outward visibility. That’s good whether you’re trying to park or find the apex on a track.

The cabin can still feel a bit claustrophobic, however. The CT4 has less shoulder room than most other similarly sized sedans, so occupants are placed fairly close together. For that reason, we wouldn’t want to ride in the center rear seat. Up front, the close placement of the seats also left little room for storage space. Cadillac did place the cupholders out of the way of our test car’s manual shifter, at least. 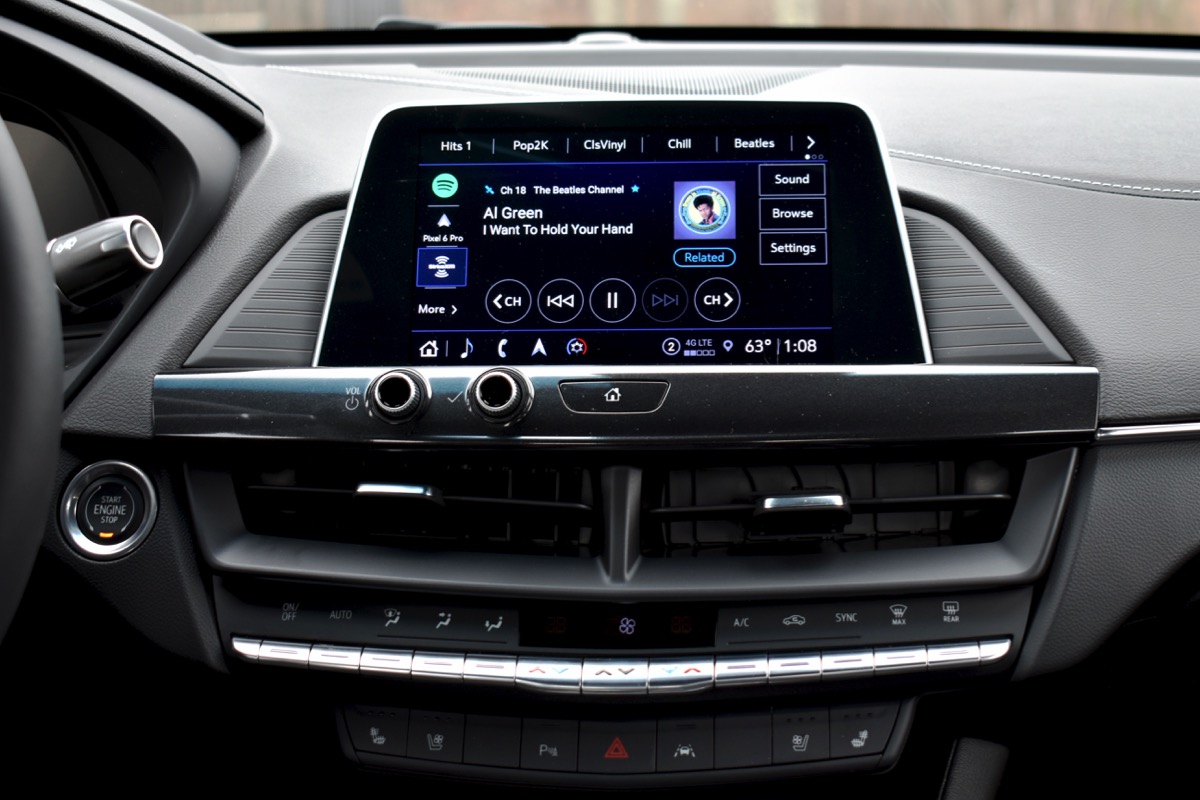 The standard infotainment system includes an 8-inch touchscreen, wireless Apple CarPlay and Android Auto connectivity, and Amazon Alexa Built-In capability. Wireless phone charging is standard as well, and a head-up display is available as part of an optional Technology Package.

We found the infotainment system easy to use, thanks to a simple menu layout with smartphone-like icons. Unlike some other Cadillac models, the CT4 also has real switchgear for climate control and other functions, instead of haptic touchpoints. However, the CT4’s tech is fairly basic by current luxury-car standards. The Cadillac lacks the natural language voice recognition you get on most German sedans these days, and even some non-luxury models now offer larger touchscreens.

The CT4-V Blackwing can also be equipped with a 15-speaker AKG audio system (other models get Bose systems) and General Motors’ Performance Data Recorder. Also used in the Chevrolet Corvette, the Performance Data Recorder records real-time audio, front-camera video (in 1080p), and 34 channels of data traces from track sessions. So, just like a professional racer, you can analyze data and video of a lap to find ways to improve your driving and find speed.

Blackwing models also get a 12-inch digital instrument cluster with different configurations for the Tour, Sport, and Track driving modes. We liked the graphics and the neat animation you get when changing modes, but wish the tachometer was displayed more prominently in a the default Tour mode. While the tach is front and center in Sport and Track modes, it’s pushed to the lower left-hand corner of the display in Tour mode. That’s not ideal for a performance car, especially one available with a manual gearbox. 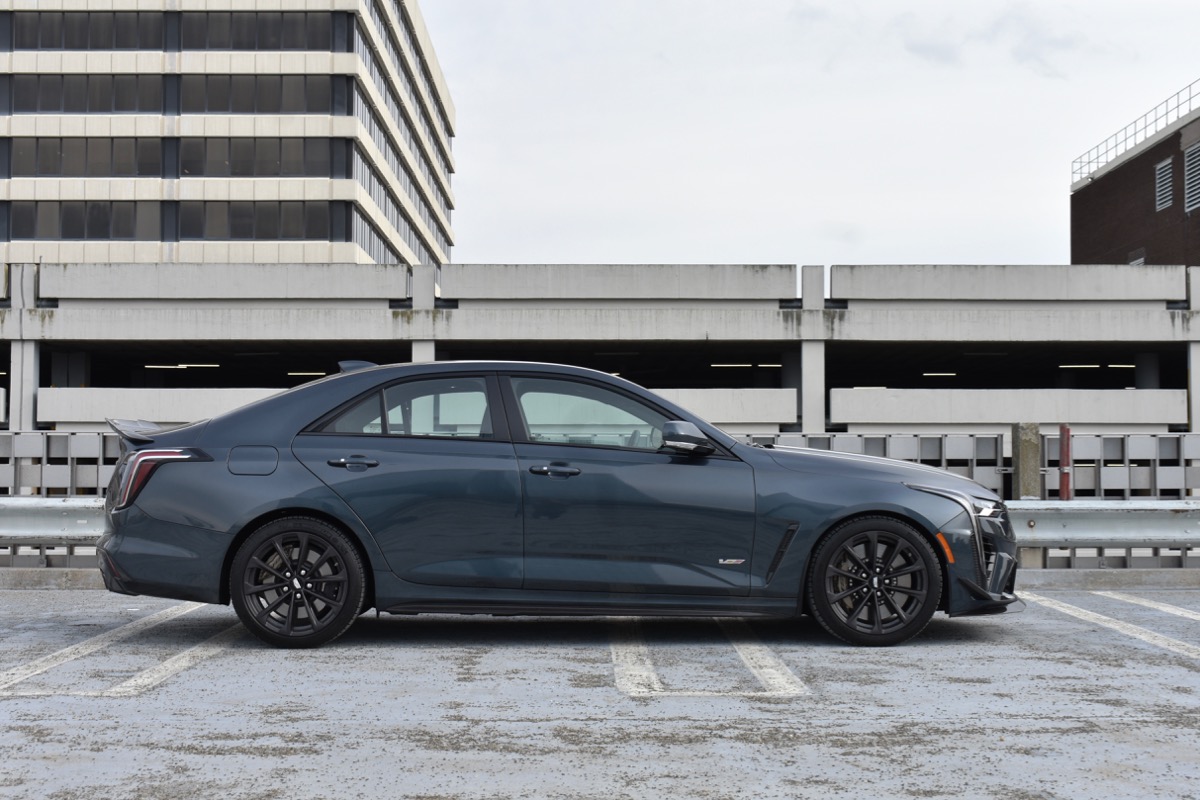 After two model years of waiting, the Super Cruise hands-free driving system will also finally be available on the CT4 Sport and Premium Luxury trim levels later in the model year. Super Cruise controls the steering, throttle, and braking on designated stretches of mapped highway. It still requires an attentive driver, however, and a driver-monitoring system is included to guard against misuse.

Overall, the CT4 is very strong on safety features. It offers more standard driver-assist tech than most competitors, and Super Cruise is more advanced than the basic adaptive cruise control systems offered in rival luxury sedans.

The only thing missing is a top safety rating. The Insurance Institute for Highway Safety (IIHS) and National Highway Traffic Safety Administration (NHTSA) hadn’t released crash test scores for the CT4 at the time of publication. 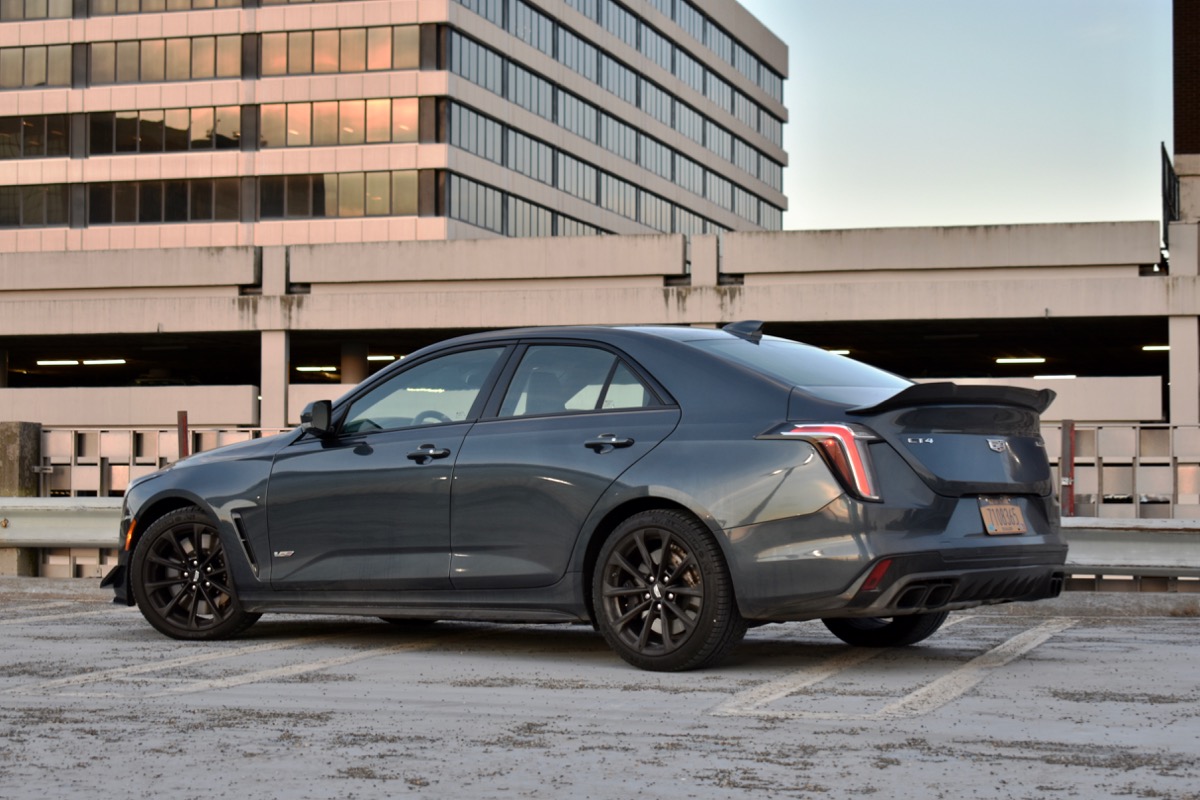 The most efficient CT4 model is the base RWD version with the 2.0-liter engine, which returns EPA-rated fuel economy of 27 mpg combined (23 mpg city, 34 mpg highway). Predictably, AWD versions and models with the larger 2.7-liter engine are less efficient, although not by much. The AWD V-Series version is rated at 23 mpg combined, for example.

Pricing starts at $34,690 for a CT4 Luxury with the base engine and RWD (all prices include a $995 destination charge), but you’ll have to upgrade to get true luxury features like leather seats. The Premium Luxury and Sport trim levels start at $40,785 and $41,985, respectively, while the CT4-V has a $46,890 base price. These prices are in line with the competition.

It’s hard to beat the Genesis G70 and Alfa Romeo Giulia when it comes to driving pleasure, although the Alfa is seriously compromised when it comes to interior space and ergonomics. The Genesis, however, offers a better warranty and more standard features than the CT4. The German sedans that inspired the CT4 offer more advanced infotainment tech, but they don’t have a clear overall advantage anymore, in our opinion. The Acura TLX Type S is a good alternative to the CT4-V, but sits below the Blackwing in both performance and price.

Speaking of the Blackwing, it starts at $59,990, which is a big step up from ordinary CT4 models, but a relative bargain compared to rivals. The BMW M3, for example, starts at $70,895. The Alfa Romeo Giulia Quadrifoglio has an $80,425 base MSRP. Our test car had $16,645 in options, including the Carbon Fiber 1 and Carbon Fiber 2 packages, a head-up display, Shadow Metallic paint, and the Performance Recorder, bringing the as-tested price to $76,635. But it’s hard to think of another car with a base price $10,000 to $20,000 lower than its main competition.

The standard CT4 is a solid sedan with a few weak points, including lackluster interior materials, middling infotainment tech, and a small trunk. It wouldn’t be a mistake to buy one, but we wouldn’t say Cadillac is building the best car in the segment, either. We have no reservations about the Cadillac CT4-V Blackwing, however. It’s simply one of the best-driving sedans you can buy today, showing the potential that was hiding in the basic CT4 platform all along.

What's your take on the 2022 Cadillac CT4-V Blackwing?

Holly I absolutely love it my mother has had several Cadillacs this is the print this is the best one I’ve seen thus far .

Have you driven a 2022 Cadillac CT4-V Blackwing?
Rank This Car

Enter your zip to see incentives for a new CT4-V Blackwing in your area.

Looking for a Used CT4-V Blackwing in your area?