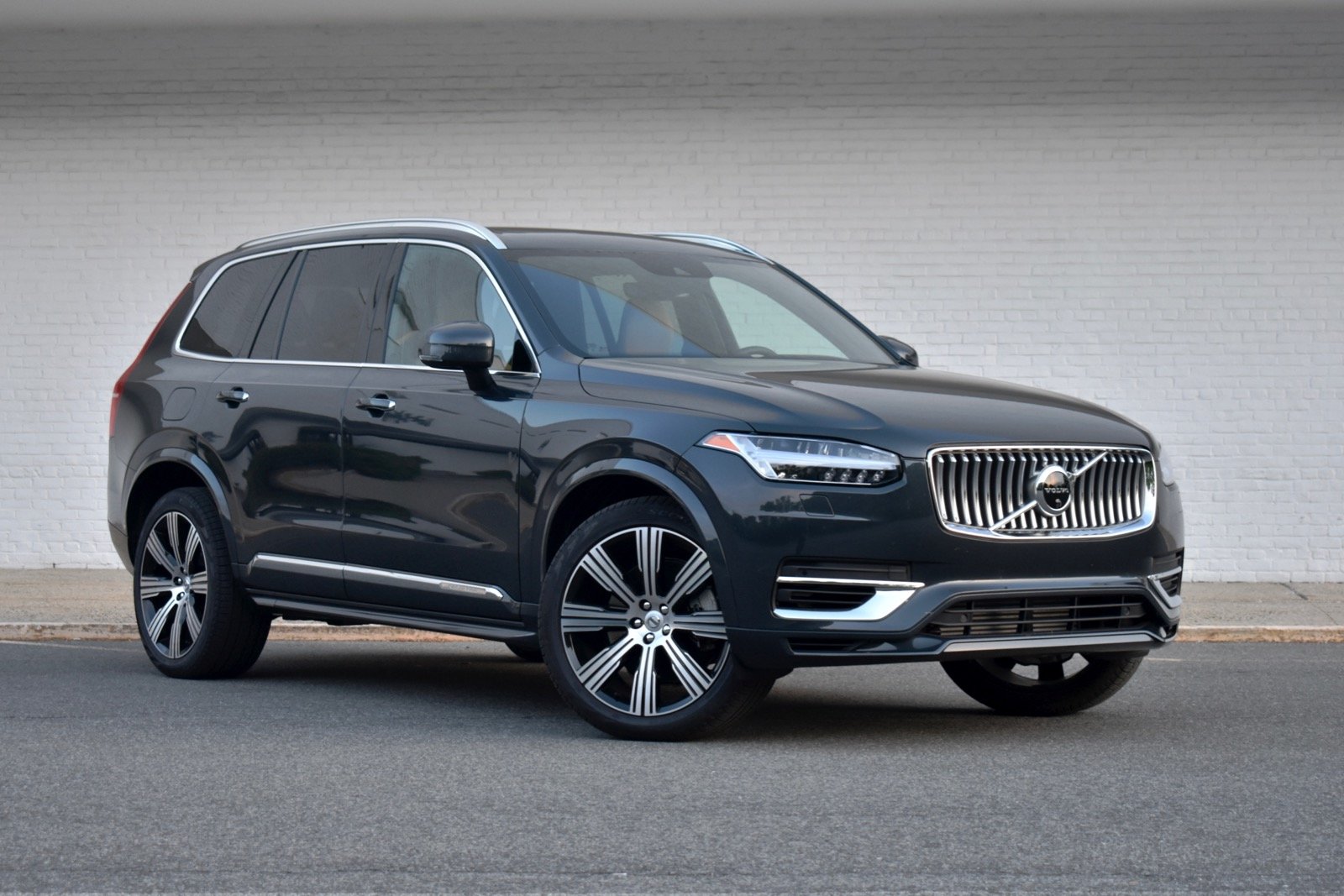 Volvo may be known for sensible station wagons, but the XC90 SUV is the Swedish automaker’s de facto flagship. The current generation debuted design features, technology, and powertrains that have since found their way into most other Volvo models. Several years into the current-generation model’s lifecycle, the XC90 is no longer a trendsetter, but remains Volvo’s contender in the competitive midsize luxury SUV segment, with the automaker’s typical emphasis on safety features.

The current-generation XC90 launched for the 2016 model year, so most competitors—including the Audi Q7, Acura MDX, BMW X5, and Mercedes-Benz GLE-Class—have been updated or redesigned since then. The Cadillac XT6 and Lincoln Aviator didn’t even exist when this generation of XC90 launched.

A redesigned version is expected to arrive soon, so changes to the 2021 XC90 are minimal. All 2021 Volvo models are now limited to 112 mph for safety reasons and get Care Key, which lets owners limit the top speed before loaning the car out to a friend or family member. The XC90 also gets a handful of newly standard tech features, and some small cosmetic changes.

Volvo offers the XC90 in three trim levels—Momentum, R-Design, and Inscription—with three powertrain options: T5 and T6 gasoline engines, and the T8 plug-in hybrid. Our test car was a range-topping T8 Recharge Inscription, combining the top Inscription trim level with the plug-in hybrid powertrain, which has the highest output of the three. 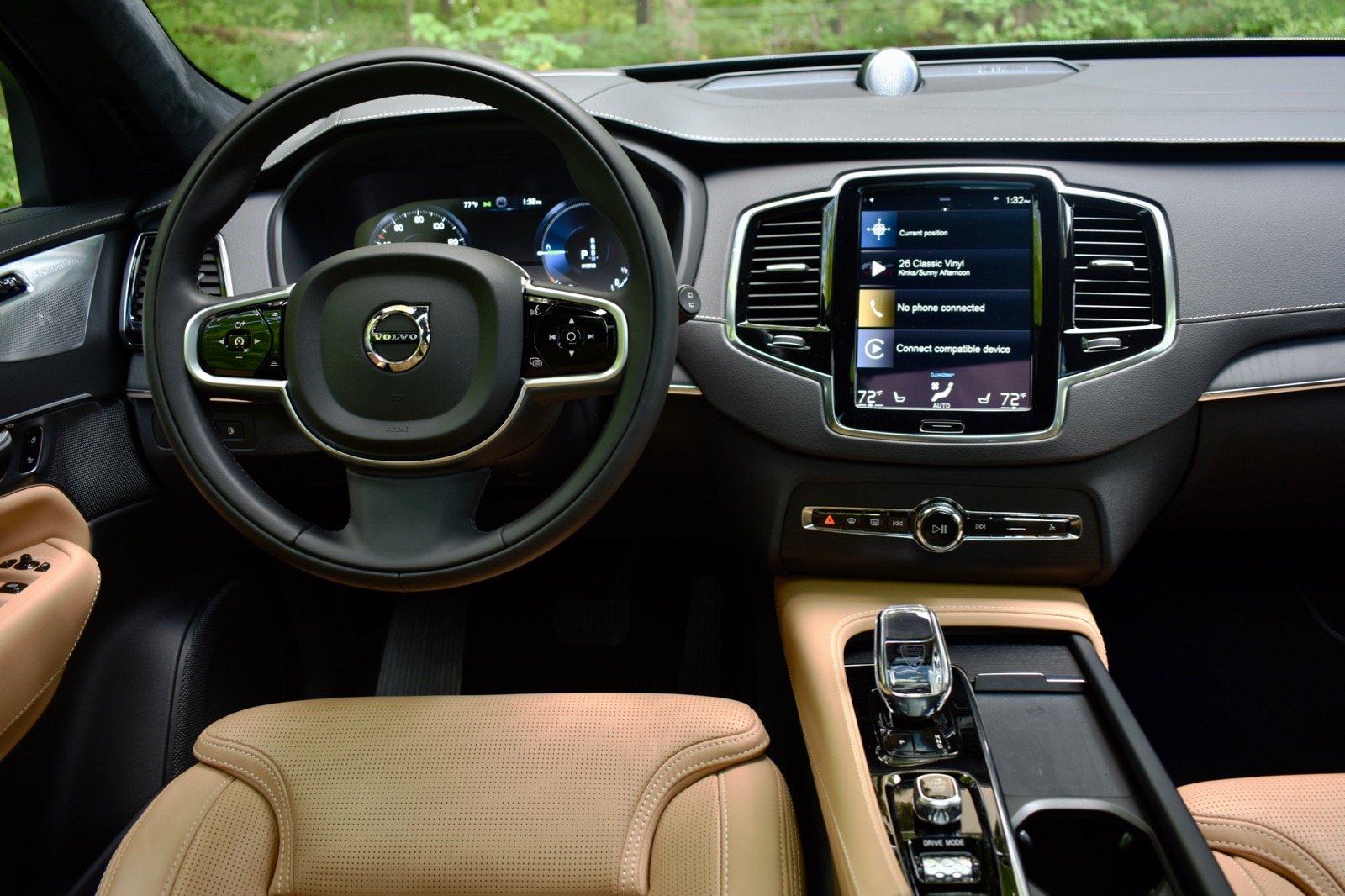 It’s rare for an automaker to successfully reshape its image through design, but that’s exactly what happened when the current-generation XC90 debuted as a 2016 model. Volvo has a reputation for conservative styling, but the XC90 added more character, while still remaining recognizably a Volvo.

Unlike Lexus, which tried to shake off a stodgy image with a radical styling revamp, Volvo kept many of its traditional styling features, including a boxy profile and a blunt front end with a rectangular grille. However, the details make the difference. Lines are a bit softer than previous Volvos, there’s more chrome in place of unpainted plastic, and the LED headlights with “Thor’s Hammer” daytime running lights are a distinctive touch that blends nicely with the rest of the design.

Sporting extra chrome trim and (optional) 21-inch alloy wheels, our Inscription test car was the flashiest of the XC90 trim levels. The midlevel R-Design (which gets a new gloss-black grille surround for 2021) goes for a sportier look while, as the base model, the Momentum doesn’t get any extra jewelry. The XC90 R-Design comes standard with 20-inch wheels, while the XC90 Momentum gets 19-inch wheels, with a new design for 2021.

“Swedish minimalism” is a cliché, but that’s exactly what you get with the XC90 interior. It doesn’t try to overwhelm you with flash, just offering nice-looking materials, thoughtfully arranged. Volvo’s matte-finish wood trim has a more natural appearance than the heavily-lacquered trim pieces in most other luxury cars, and it’s hard to think of another car that offers a wool upholstery option (Nappa leather upholstery is also available). Our test car also had an Orrefors crystal shifter, a high-end touch that actually seemed a bit out of place in the otherwise restrained interior. 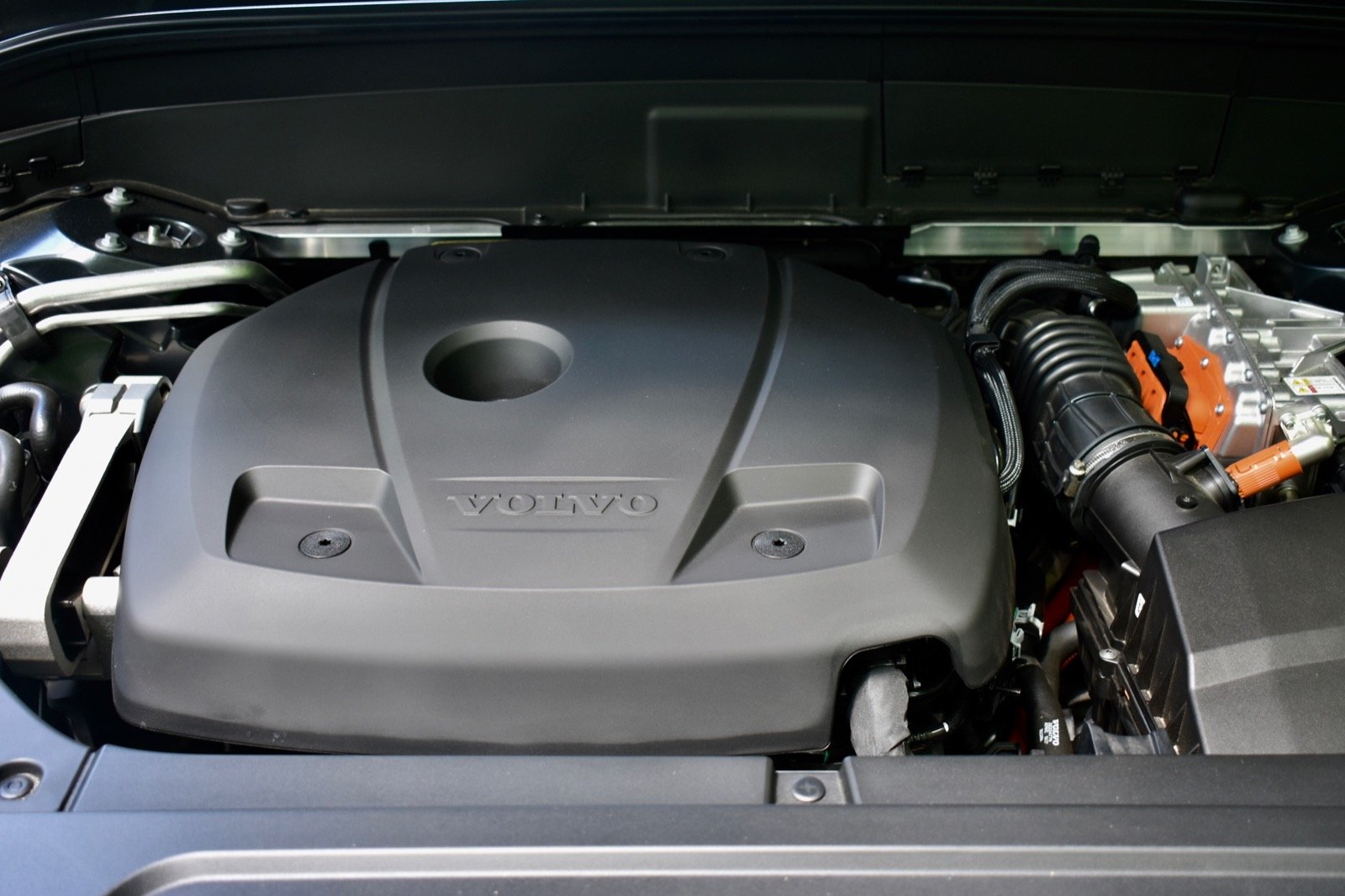 All three XC90 powertrains are built around a 2.0-liter four-cylinder engine and eight-speed automatic transmission. In the base T5, the engine is turbocharged, producing 250 horsepower and 258 pound-feet of torque. In the T6, the engine is both turbocharged and supercharged, upping output to 316 hp and 295 lb-ft of torque.

Finally, the T8 Twin Engine plug-in hybrid powertrain (also called Recharge, in line with Volvo’s new branding for electrified models) takes the T6 engine and adds electric assist in the form of an integrated starter/generator motor, and an electric motor for the rear axle. The combined output is 400 hp and 472 lb-ft. The T5 comes standard with front-wheel drive (FWD). An all-wheel-drive (AWD) drivetrain is optional on the T5, and standard on the T6 and T8.

While 400 hp is more than enough to move an SUV of this size, it’s important to remember that most of that power is being generated by a small engine. Even with electric assist and two forms of forced induction, the inline-four isn’t as flexible as the six-cylinder or V8 engines available in competitor SUVs. The XC90 also struggled to accelerate away from stops on electric power, meaning the gasoline engine inevitably had to be called in to assist even at relatively low speeds.

So while the XC90 Recharge was designed to be more efficient than traditional luxury SUVs, you often have to choose between efficiency and power. Volvo included three drive modes—Pure (all-electric), Hybrid, and Power—but Pure mode was really only useable at low speeds, with gentle acceleration. Like many other plug-in hybrids, the XC90’s gasoline engine automatically kicks in at a certain point in the accelerator pedal’s travel, so making the most of the all-electric Pure mode was difficult.

However, the XC90 excels at old-school luxury. Even with the aforementioned 21-inch wheels, ride quality was excellent, helped by an (optional) air-suspension system. The XC90 wasn’t tuned for sporty handling, but the suspension also kept body roll in check through corners, so passengers won’t feel like they’re on a roller-coaster ride. The cabin was also impressively quiet; the only noises you’ll hear will be the air conditioning and seat ventilation fans on a hot day.

Most XC90 models also have a respectable 5,000-pound maximum towing capacity (the base FWD T5 is rated at 4,000 pounds). That should be enough to handle a decent-sized trailer or boat, but if you plan to tow something really big, note that the Lincoln Aviator is rated to lug up to 6,700 pounds. 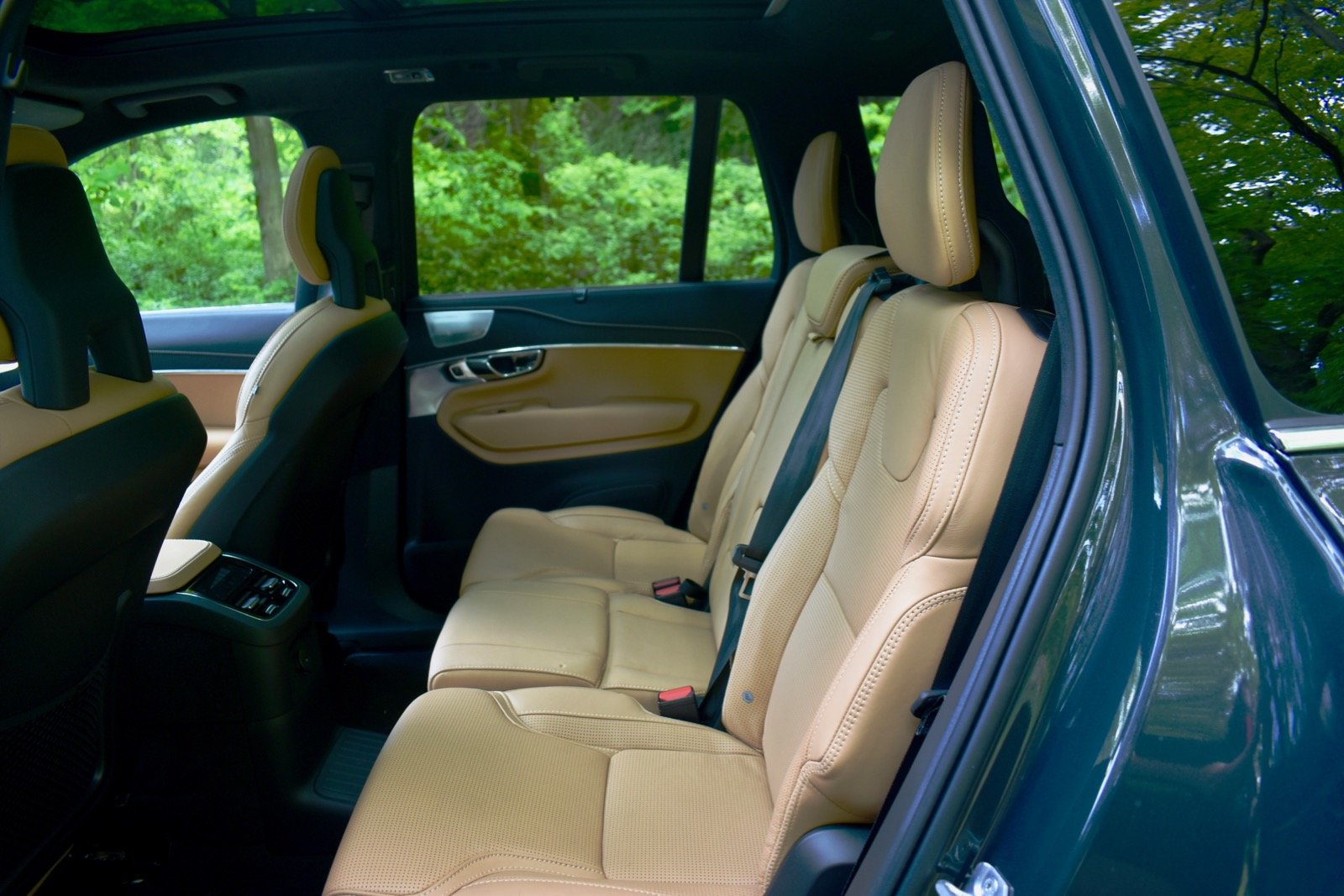 The three-row 2021 XC90 is available in six-seat or seven-seat configurations, depending on whether you opt for second-row captain’s chairs or a bench seat. Most similarly-sized luxury SUVs are available with a third row of seats, although the BMW X5 and Mercedes-Benz GLE are not.

Headroom and legroom in all three rows is about average for the segment. That means third-row space is a bit tight for adults, and seats in both the third row and second row felt hard and lacked support. An optional power moonroof extends across the first two rows which, combined with the XC90’s upright roof profile, gave the interior a more spacious feel than the numbers might suggest, at least. Standard four-zone climate control can be augmented with a filtration system designed to trap fine particulate matter—a common form of air pollution linked to respiratory illness.

Up front, our range-topping Inscription test car sported 10-way power-adjustable heated and ventilated front seats with backrest massage (part of the optional Lounge Package), but even with every box ticked, you don’t get a power-adjustable steering wheel. Finding a good driving position was easy, however, although forward visibility was less than optimal due to the XC90’s tall hood. Storage space was also fairly limited, thanks to a shallow center console storage bin and a lack of storage options on the console itself. 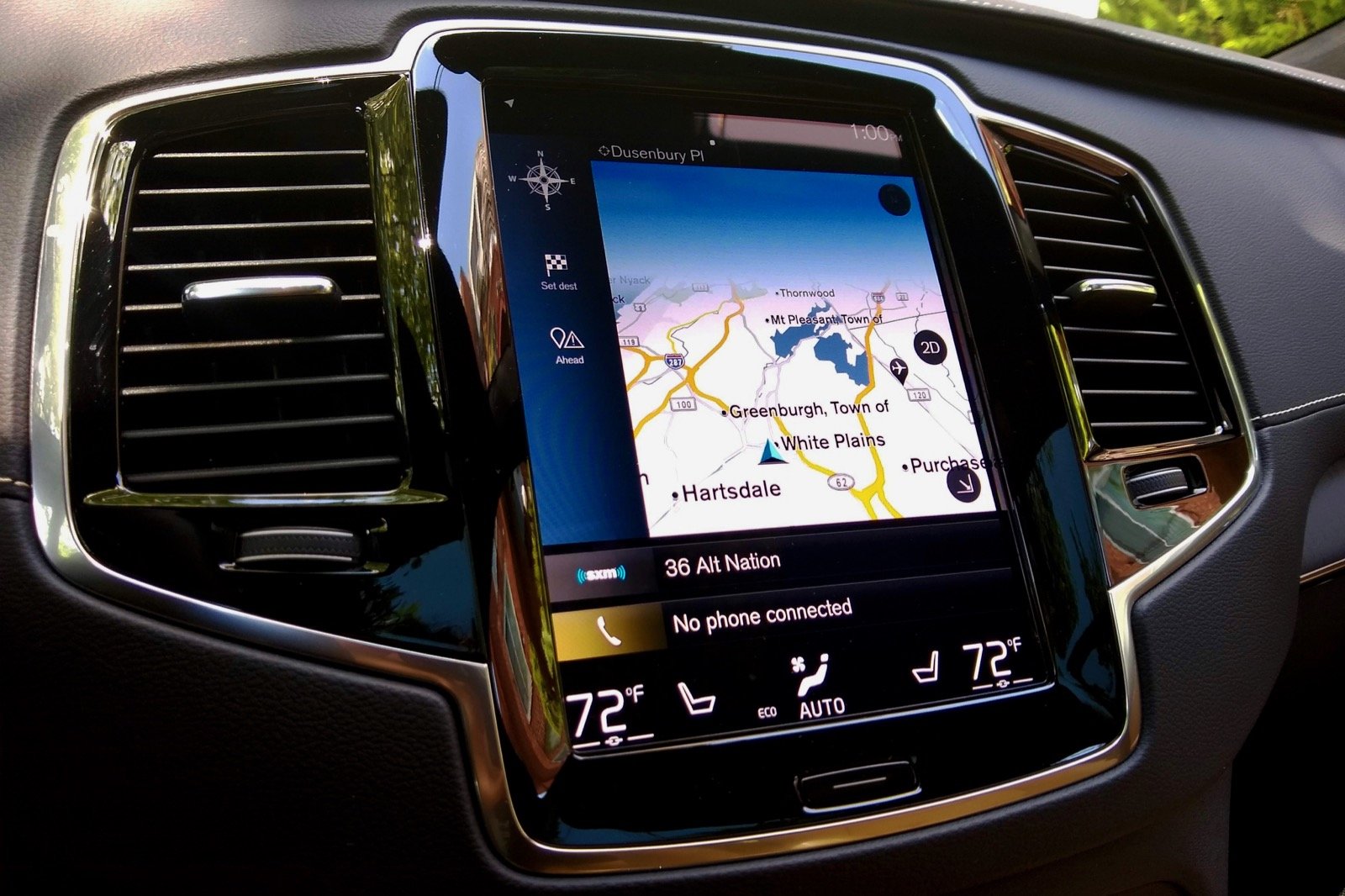 The portrait-oriented touchscreen is one of the easiest to use in the business, allowing you to swipe across its various menus just like a tablet. That’s good, as Volvo didn’t include many analog backup controls. For once, though, that wasn’t an issue for us. The touchscreen worked well enough, and the lack of buttons was at least in keeping with the interior’s minimalist design.

However, the amount of text, as well as the typeface used, made reading some menus difficult while driving. The wireless charging pad Volvo added to the center console for 2021 also won’t fit most phones, and because the XC90 only has second-row USB-C ports, drivers with newer phones might not be able to plug in up front. 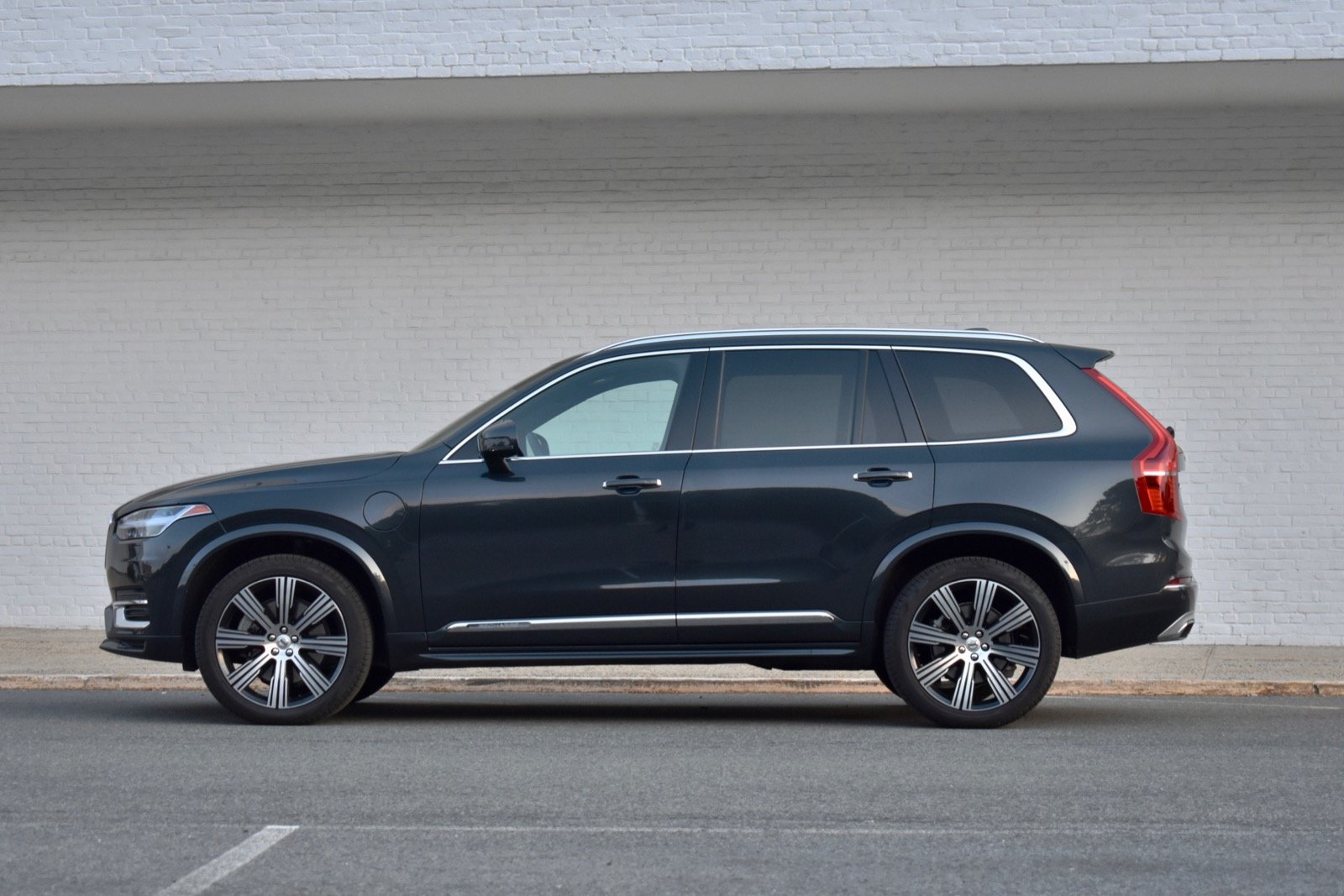 The 2021 XC90 received the highest “Top Safety Pick+” rating from the Insurance Institute for Highway Safety (IIHS), but that only applies to non-hybrid models, as the IIHS hasn’t updated its ratings for the XC90 T8 plug-in hybrid.

Pilot Assist was one of the first systems of its kinds and remains one of the best. While similar functionality is now available from many other automakers (including several lower-priced mainstream brands), few can match Pilot Assist’s smoothness, or its quickness to react to what other vehicles are doing. However, this technology is still quite limited; even gentle highway curves can give the lane-centering feature trouble. It’s not meant to replace an attentive human driver, and can’t match the abilities of one. 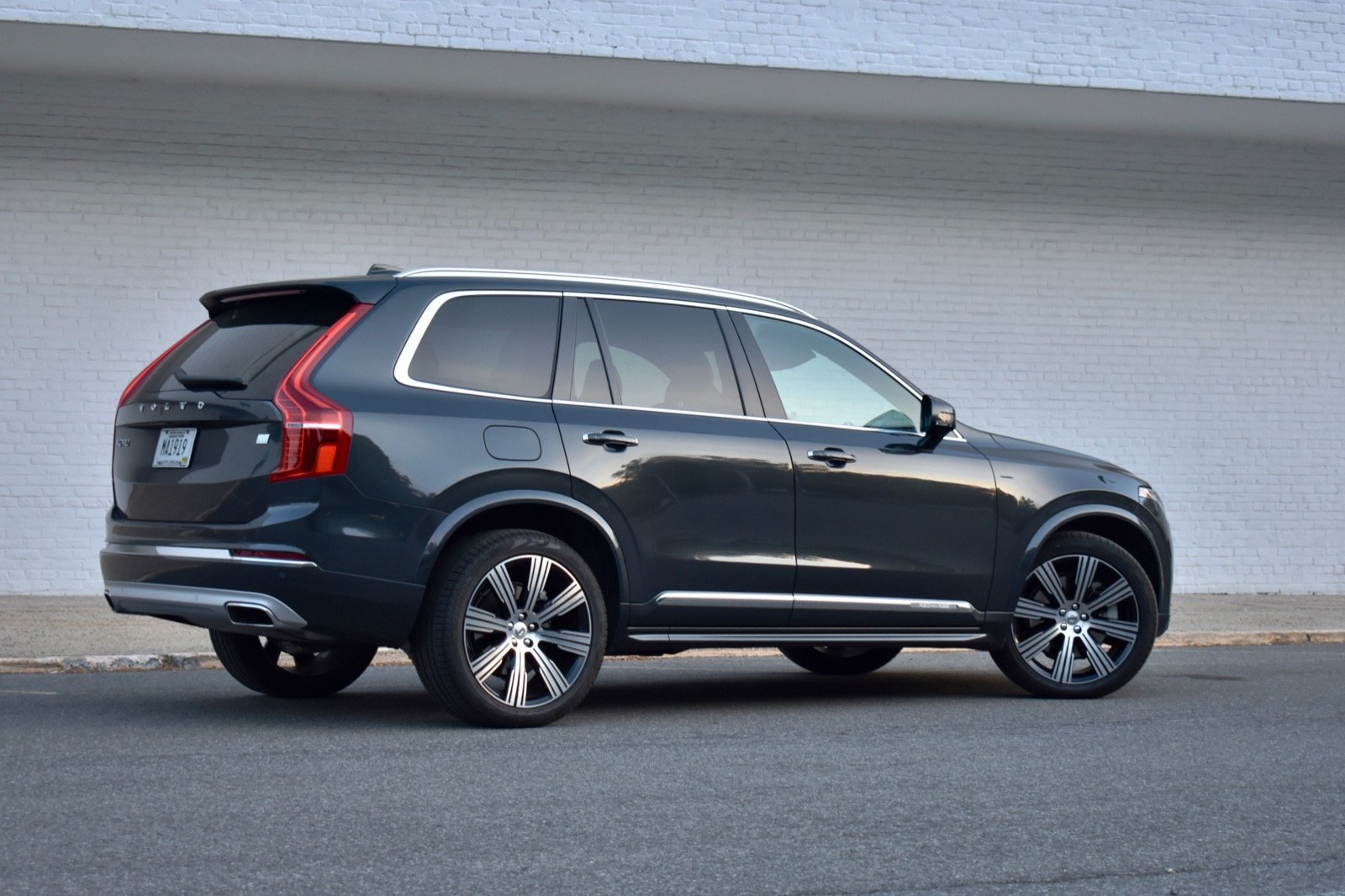 The XC90 T8 Recharge plug-in hybrid gets an EPA-rated 27 mpg combined in hybrid mode (we averaged 26.1 mpg, according to the dashboard display), but also boasts up to 18 miles of all-electric range, with an efficiency rating of MPGe combined. To get maximum efficiency, though, you’ll need to plug in regularly. The 11.6-kilowatt-hour battery pack takes three hours to recharge from a 240-volt Level 2 AC source, and the XC90 isn’t available with DC fast-charging, which might come in handy on road trips.

Pricing for the 2021 Volvo XC90 starts at $49,995 for a FWD T5 model in the base Momentum trim level (all pricing includes a mandatory $995 destination charge). The range-topping T8 Recharge Inscription has a $70,745 base price, but our test car had extras like 21-inch wheels, air suspension, the Bowers & Wilkins audio system, 360-degree camera system, and air-purification system, inflating the MSRP to $81,690.

Like most other luxury cars, the equipment that makes the XC90 truly, well, luxurious isn’t standard. Volvo at least does better than most by offering a long list of standard safety features, however. An upscale design and refined road manners also make the XC90 feel like more than just a list of features. It’s a true luxury SUV, defined by the way it drives rather than gadgets, and that is why, despite its age, the XC90 gets our praise.