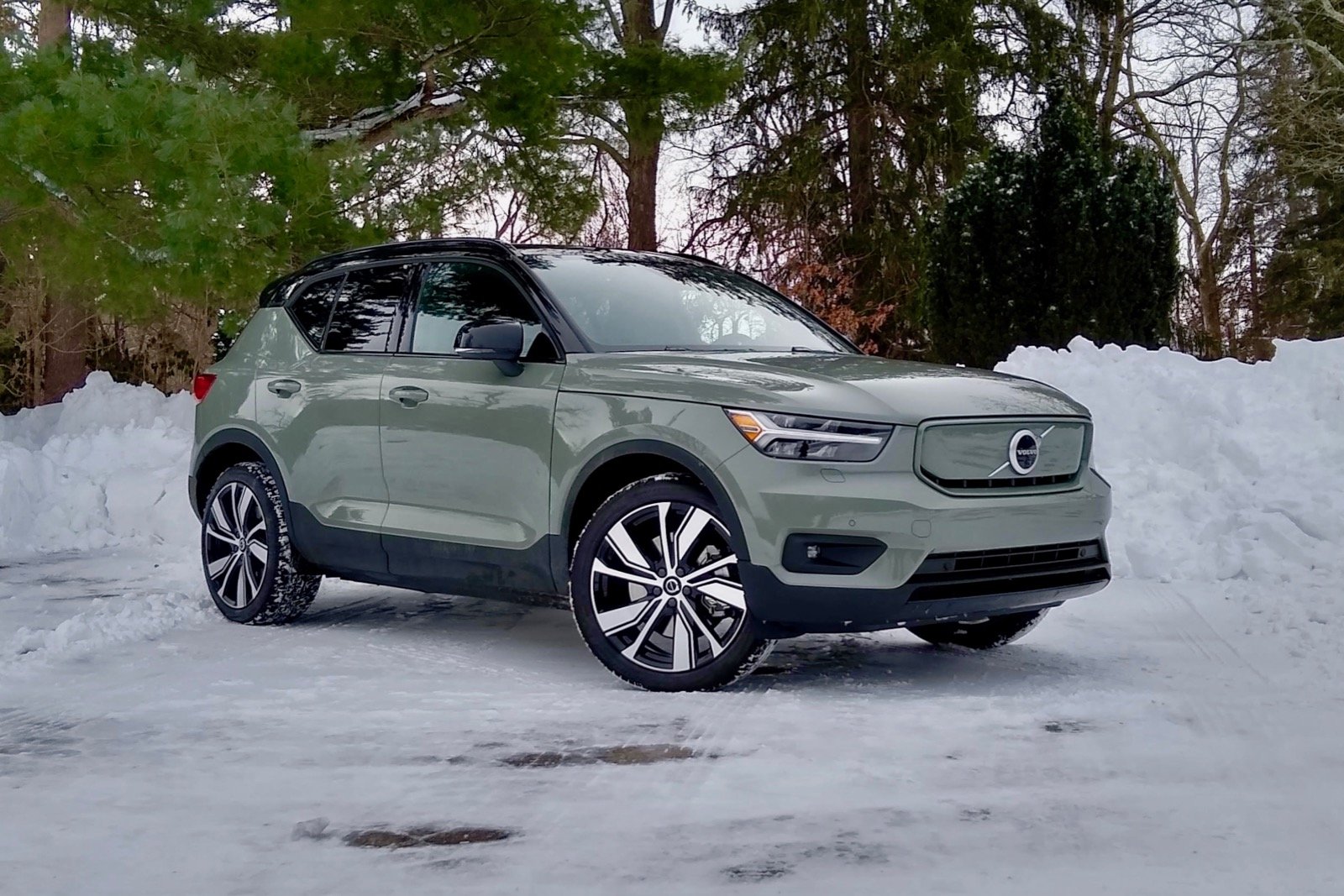 Introduced for the 2019 model year, the Volvo XC40 enters 2021 with one major change—the addition of an all-electric powertrain option. The 2021 Volvo XC40 Recharge is the Swedish automaker’s first mass-market electric vehicle, in fact.

The Recharge will be sold alongside gasoline versions of the XC40, which carry over largely unchanged, and compete against small luxury crossovers like the Audi Q3, BMW X1, Mercedes-Benz GLA-Class, and Lexus UX. With its electric powertrain, the Recharge is a de facto Tesla Model Y competitor. It’s also priced similar to high-end versions of the Ford Mustang Mach-E, although the two electric crossovers have somewhat different philosophies.

In addition to that zero-emission powertrain, the Recharge gets an Android-based operating system, over-the-air (OTA) software update capability for all vehicle systems, and some updates to driver-assist tech. These changes don’t apply to gasoline 2021 XC40 models, but Volvo does plan to add the Android operating system to more vehicles in the future. 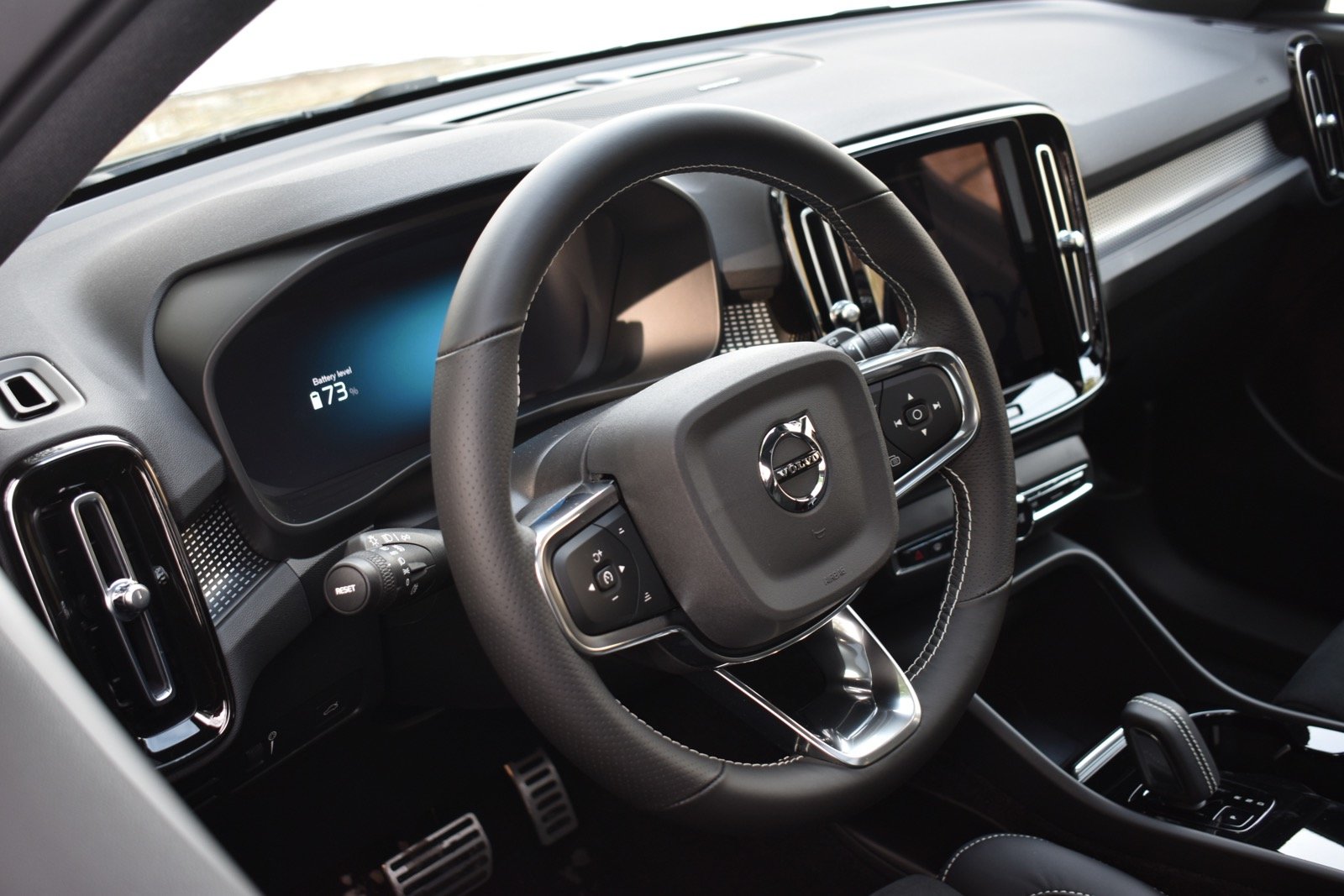 The XC40 has more traditional SUV styling than most other small luxury crossovers, with a tall, flat, roof and upright rear hatch. It also fits in nicely with the rest of the current Volvo lineup, thanks to familial styling cues like “Thor’s Hammer” LED headlights and a simple oval grille. Gasoline XC40 models are also available with a white contrasting roof, for a slightly retro look.

The XC40 Recharge is distinguished from gasoline XC40 models by a blanked-off grille, subtle “Recharge” badging, and model-specific alloy wheels (19-inch wheels are standard, 20-inch wheels are optional). The Recharge also gets a gloss black roof and mirror caps, a slightly different rear bumper to account for the lack of exhaust tips, and a model-exclusive color—Sage Green Metallic. Its charging port is located where the fuel filler would normally be. These fairly minor differences make the XC40 Recharge a good option for electric-car drivers who don't want to show off.

Under the sheet metal is Volvo’s Compact Modular Architecture (CMA) platform, which also underpins the Polestar 2 electric car from Volvo’s new spinoff brand. CMA was designed from the start to accommodate both gasoline and electric powertrains, so this isn’t a case of an automaker shoehorning an electric powertrain into a vehicle that was engineered for it.

The interior is delightfully minimalist, with high-quality materials that give it a premium feel. You get real metal trim on the dashboard, while the upholstery is a combination of Nappa leather and Nubuck textile.

The interior also a very coherent design, with every element, from the portrait-oriented touchscreen to the air vents, melding together into a pleasing whole. In this segment, most automakers dumb down their interior designs to meet a specific price point. That’s not the case with Volvo. 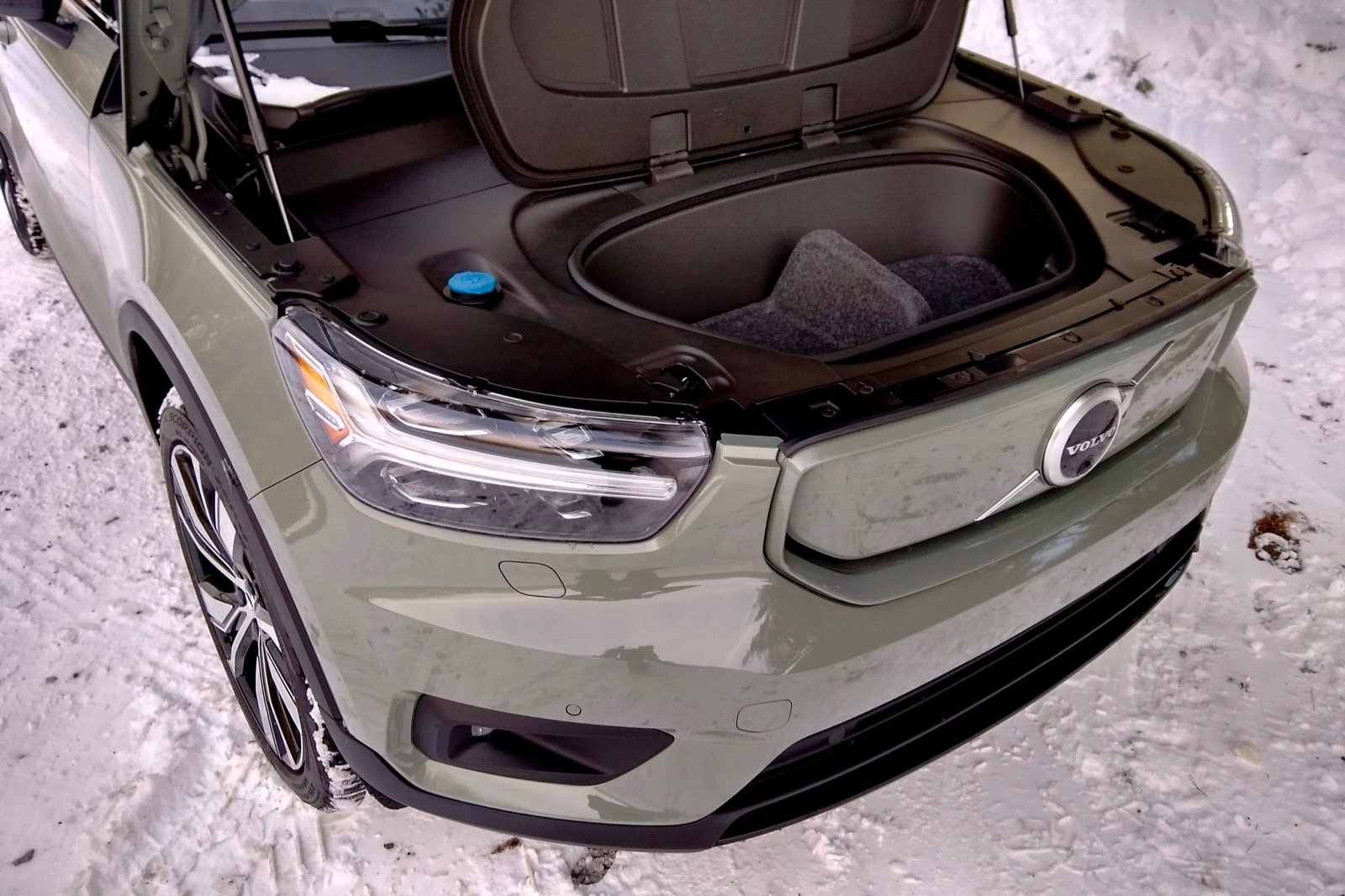 Volvo gave the 2021 XC40 a three-tiered powertrain lineup—with the electric Recharge on top. The two gasoline options both include a 2.0-liter turbo four-cylinder engine and eight-speed automatic transmission. The base FWD T4 has 187 horsepower and 221 pound-feet of torque, while the AWD Volvo XC40 T5 has 248 hp and 258 lb-ft.

The Recharge shares its powertrain with the Polestar 2, so it gets one electric motor for each axle, enabling AWD and a combined 402 hp and 486 lb-ft. Electricity is provided by a 78-kilowatt-hour battery pack, with 75 kWh of usable capacity. The pack is divided into modules located under the floor, and in the space normally occupied by the transmission tunnel.

In the zero to 60 mph sprint, the Recharge is 0.1 seconds quicker than a Tesla Model Y Long Range and Ford Mustang Mach-E Premium, but 1.2 seconds behind the Model Y Performance and Mach-E GT Performance Edition, as well as 0.3 second behind the mechanically-similar Polestar 2. However, the Recharge doesn’t really aim to compete with those performance-focused models.

Like other recent Volvo models, the XC40 Recharge has a more traditional luxury character, emphasizing quiet and comfort rather than g-force and speed. Even with the optional 20-inch wheels and winter-ravaged New Jersey roads, ride quality was excellent. The Recharge model is also capable of one-pedal driving, which uses regenerative braking rather than friction brakes for most deceleration. Volvo also included a “normal” braking mode for drivers not used to the sensation.

While most electric cars aren’t rated for towing, the Recharge has a towing capacity of 2,000 pounds, when properly equipped. 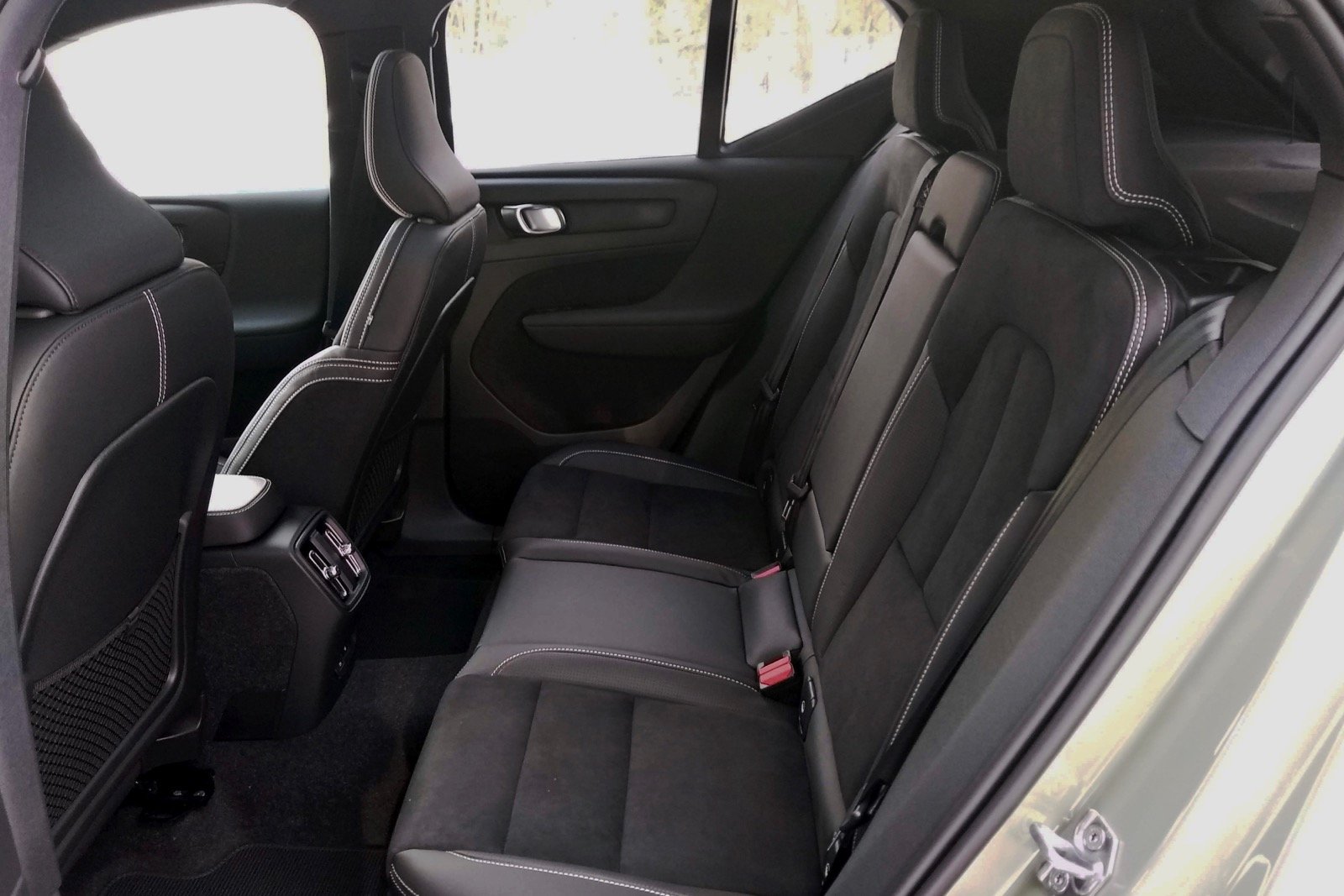 Volvo claims there is no difference in passenger space or cargo space between the Recharge and gasoline XC40 models. However, that doesn’t mean the XC40 Recharge is particularly spacious. It has less legroom in both the front seats and rear seats than the Tesla Model Y or Ford Mustang Mach-E, less headroom than the Tesla, and a substantially smaller cargo area as well. The Recharge’s frunk is also very small, with much of the space under the hood occupied by powertrain hardware.

The gasoline XC40 is more competitive on interior space when compared to its rivals, such as the Audi Q3 and BMW X1, but that just shows how low the bar for utility is in this segment.

Volvo makes up for the lack of overall space, to some extent, with clever storage solutions. The center console includes a removable trash bin, and a bag hook is built into the glovebox door. Most car audio systems have speakers in the doors but, in the XC40 Recharge, Volvo moved the Harman Kardon system's speakers onto the dashboard, allowing for extra-large door bins. The storage cubby ahead of the shifter is properly shaped to hold a phone without letting it slide around. A wireless charging pad is optional, while a single USB-C port is standard. However, second-row occupants don’t get any phone-charging options. 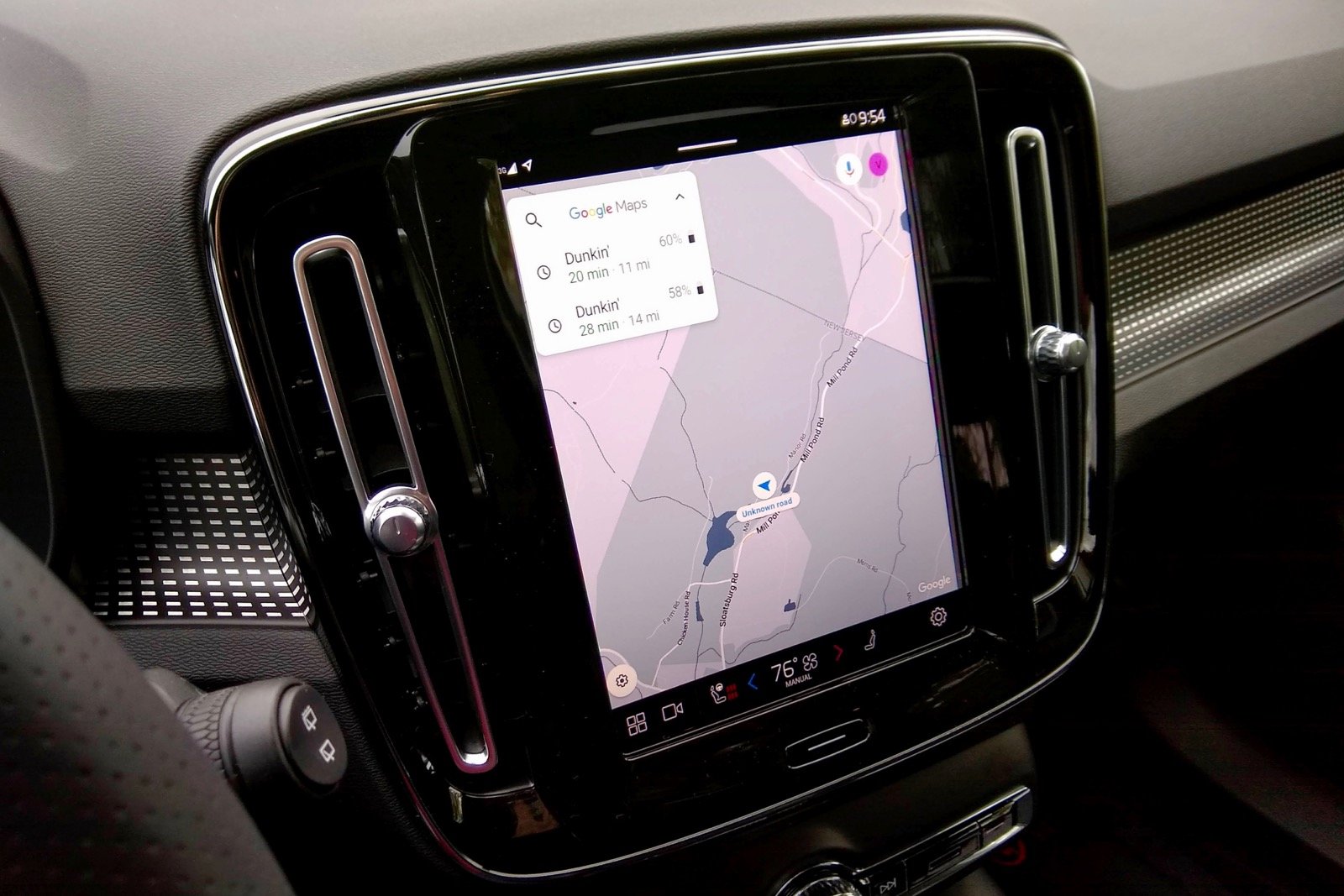 The 2021 Volvo XC40 Recharge gets the Android Automotive OS infotainment system introduced on the Polestar 2, while gasoline models continue with the same system as before. From a user’s perspective, the distinguishing feature of Android Automotive OS is the use of Google apps. So instead of generic voice control and navigation, you get Google Assistant and Google Maps. Android phone users can also sync their personal Google accounts for further customization.

The system still includes conventional Apple CarPlay, Android Auto, and Bluetooth hands-free phone connectivity, but the Google features are built-in, so you’ll be using them whether you connect a smartphone or not. The standard hardware setup includes a 9-inch touchscreen and a 12.3-inch digital instrument cluster. Graphics and menu layouts are top-notch, but drivers who don’t like Google’s interface for smartphones and computers may be displeased to find that everything displays exactly the same way here.

The Recharge is also the first XC40 variant to get OTA update capability, which includes not just the infotainment system, but any vehicle function controlled by software. OTA updates have been popularized by Tesla as a way to push new features or fix bugs without customers having to take their cars to dealerships, although Volvo has been vague on future plans for the feature.

Recharge models also lack a start button. Instead, you simply get in the car (with a key fob on your person), and shift out of park. The related Polestar 2 will soon get a Digital Key feature, allowing the driver to use a smartphone in place of the key fob, in an OTA update, but Volvo hasn’t confirmed that feature for the XC40. 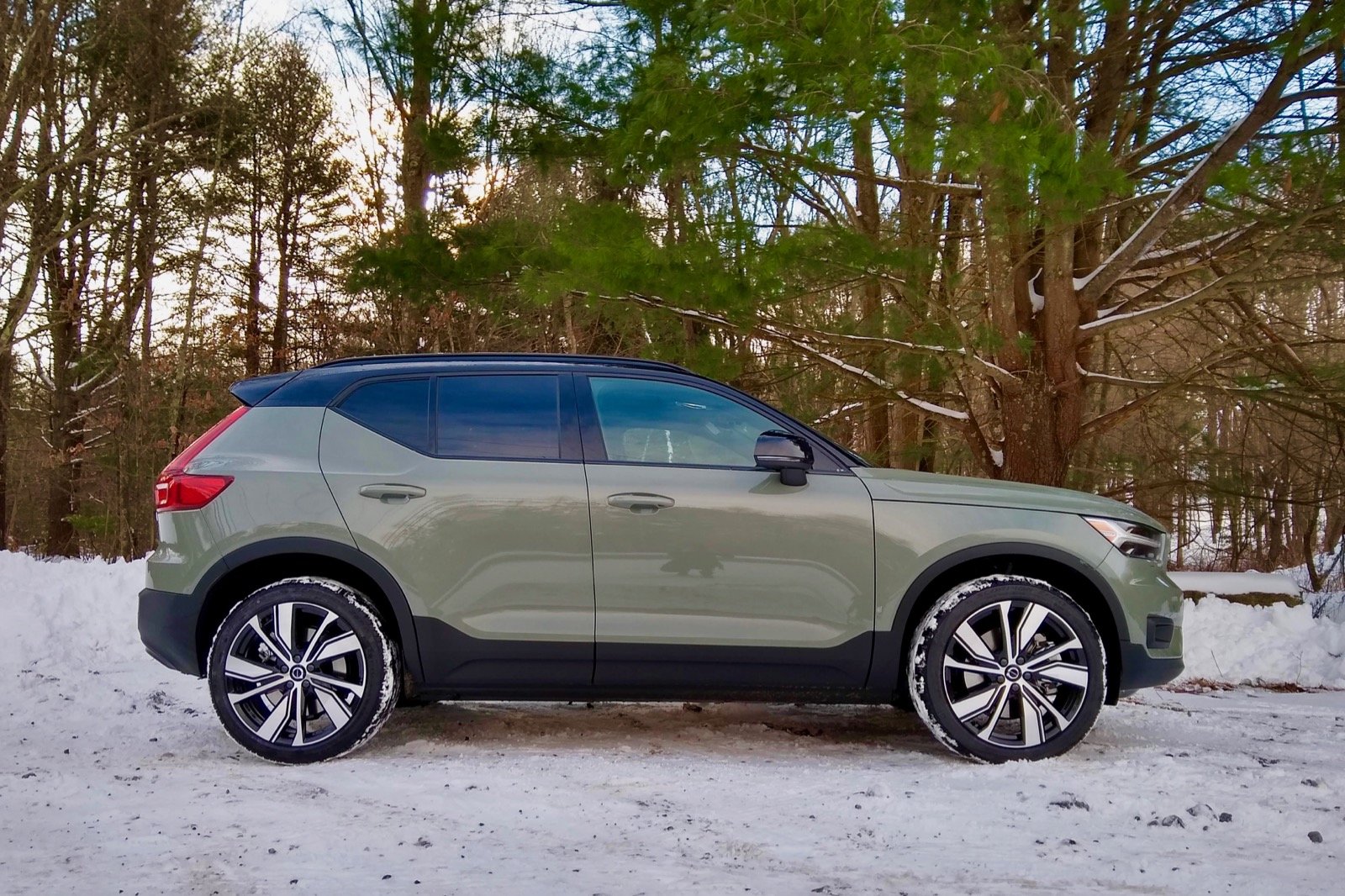 These ratings aren’t applicable to the electric XC40 Recharge, however, as the battery pack and lack of an engine change the way the vehicle structure reacts in a crash. Volvo expects the Recharge to perform well in crash tests, however, thanks to a safety cage around the battery and a redesigned front crash structure.

The Recharge model also gets Volvo’s latest sensor suite (including a radar unit hidden in the Volvo logo in the grille), and accompanying software. This doesn’t add any new features today, but it is scalable, allowing for more advanced driver aids in the future, according to Volvo. It’s also capable of pulling data from the cloud to improve the performance of the driver aids. 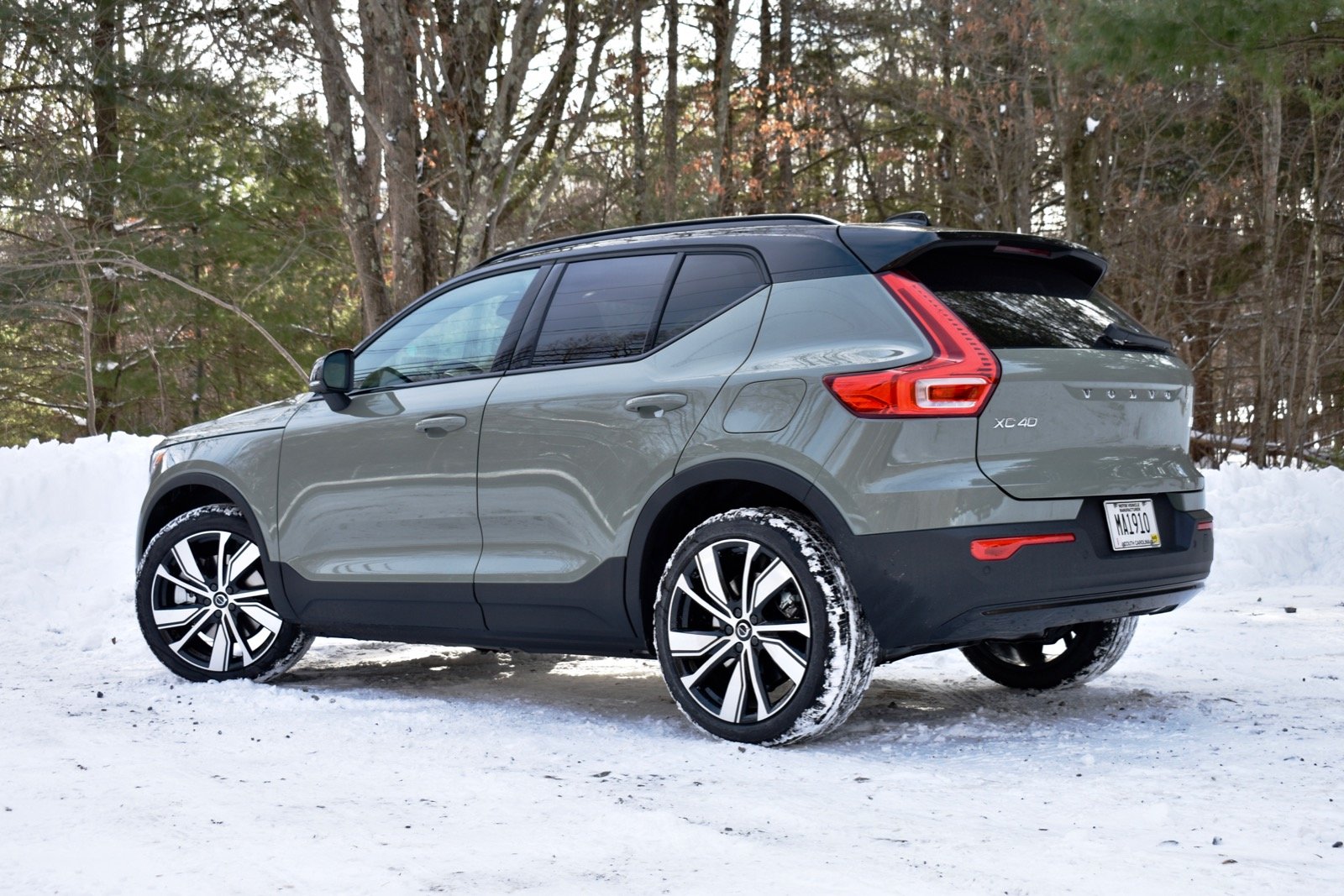 The FWD gasoline 2021 Volvo XC40 T4 has EPA fuel-economy ratings of 26 mpg combined (23 mpg city, 32 mpg highway), while the T5 AWD model is rated at 25 mpg combined (22 mpg city, 30 mpg highway). The electric Recharge model is rated at 79 MPGe combined with a 208-mile range—not too impressive when both versions of the Tesla Model Y boast more than 300 miles of range, and some less-expensive electric cars have passed the 250-mile mark.

The Recharge model is capable of DC fast charging at up to 150 kilowatts, allowing for an 80% charge in 40 minutes, according to Volvo. The EV also has an 11-kW onboard charger, which can complete a full charge in eight hours using a 240-volt Level 2 AC source (Volvo does not recommend charging from a standard 120-volt household outlet), and the car comes with a charge cord that allows it to plug directly into the 240-volt outlets used by large appliances.

Pricing for gasoline XC40 models starts at $34,695 for a base FWD XC40 T4 Momentum trim. The electric XC40 Recharge has a base MSRP of $54,985. That’s a big step up from the gasoline model, but in line with the similarly-sized Tesla Model Y. Unlike Tesla, Volvo is also eligible for the full $7,500 federal EV tax credit.

Small crossovers tend to be entry-level models for luxury brands, meaning they’re often phoned-in efforts. That isn’t the case with the XC40, which has the polish and style of its bigger siblings. The electric XC40 Recharge, however, falls short of the Tesla Model Y on utility, and its 208-mile range is below average for an electric car at any price point. However, the Recharge still has adequate range for daily use and is nice enough to drive to warrant consideration.