Looking for a New Volkswagen Passat in your area? 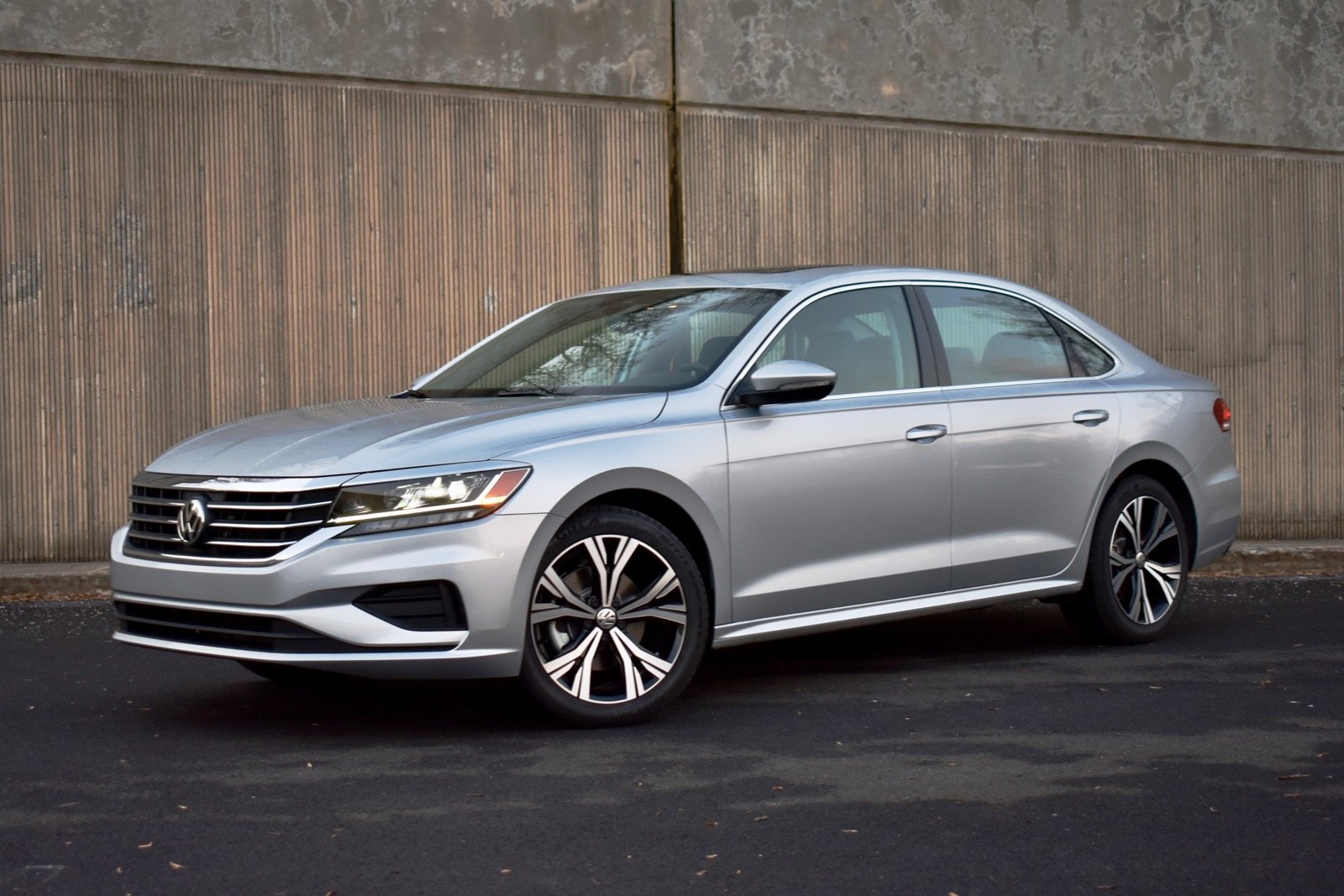 Despite its German branding, the 2021 Volkswagen Passat is an All-American midsize sedan. It was developed specifically for the United States market, and it’s built in Chattanooga, Tennessee.

In 2011, when the Americanized Passat was launched, VW thought the sedan was the key to dominating the U.S. market. Midsize sedans like the Honda Accord and Toyota Camry were still the default choice for most buyers at that time, after all. A lot has changed since then—SUVs are surging in popularity, and a diesel-emissions scandal has forced VW to focus more on electric cars—but the Passat rolls on. With the flashier Arteon now in the lineup, however, the Passat has been repositioned as VW's value-focused midsize sedan.

The Passat got a significant update for the 2020 model year, so changes for 2021 are fairly limited. The previously-available Passat SEL trim level is gone, leaving just the base S, SE, and R-Line models. Adaptive cruise control is now standard across the board, and some trim levels get more standard equipment as well. Our test car was a mid-level SE model. 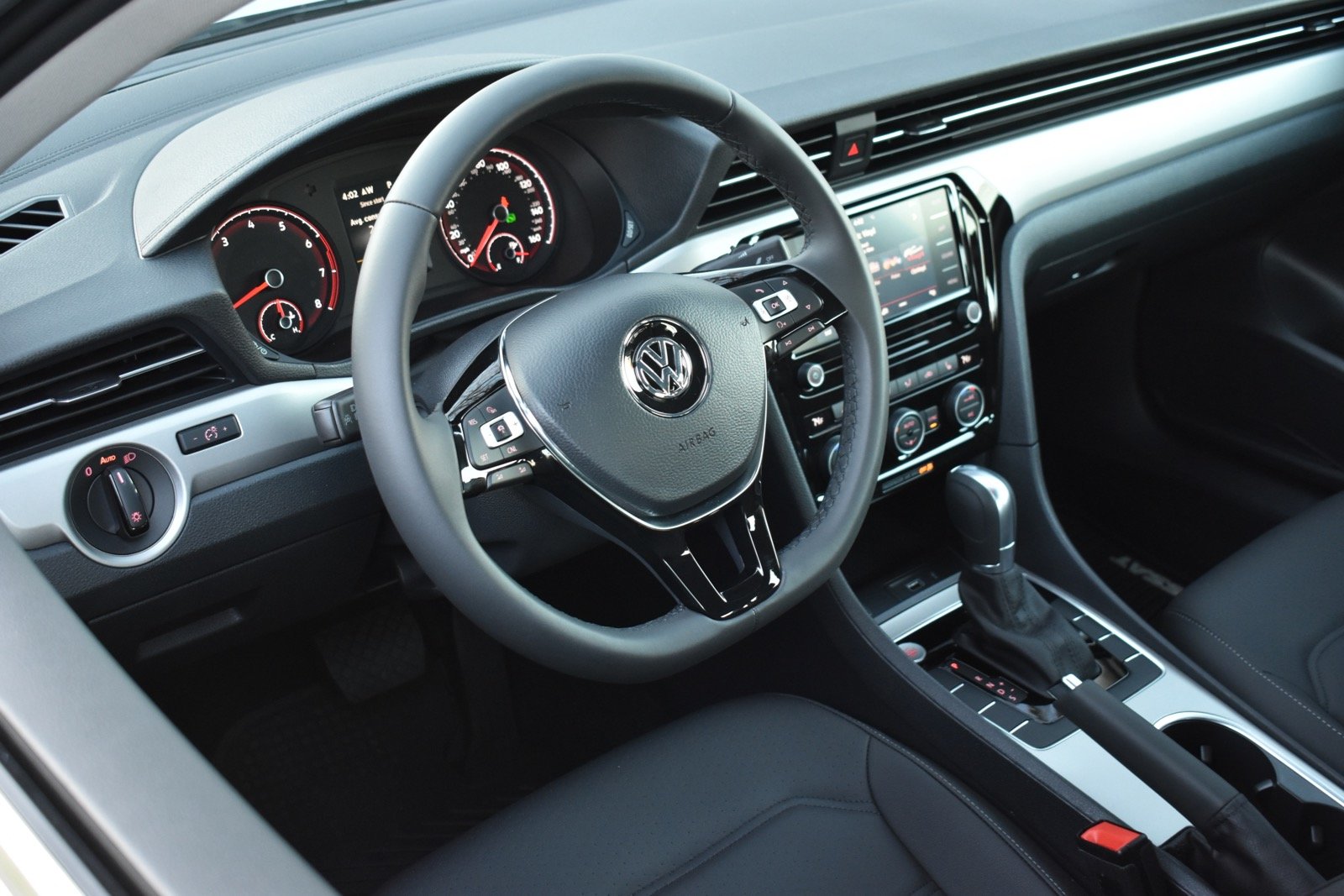 The exterior styling hasn’t really changed for the 2021 model year. That’s because the Passat got a facelift for the 2020 model year—the first major styling change for the sedan in almost a decade. VW kept the same basic body shell but it changed every panel except the roof. Today, the Passat bears a strong familial resemblance to the smaller Volkswagen Jetta sedan. That gives the Passat a more understated look than many of its rivals—particularly the radically-styled Hyundai Sonata, Kia K5, and Toyota Camry.

With its rounded-off corners, the Passat also looks a bit like the ubiquitous jellybean sedans of the 1990s, and like those cars, aerodynamic efficiency is one of the claimed benefits of that smooth shape. The Passat boasts a drag coefficient of 0.28, according to VW. A lower drag coefficient contributes to better fuel economy, although the effect doesn't seem to be that dramatic in the Passat, as we shall see.

LED headlights and taillights are standard, along with 17-inch alloy wheels. SE models get 18-inch wheels, while R-Line models get 19-inch wheels and an Adaptive Front-lighting System (AFS) that allows the driver to adjust the headlights’ range. As with other VW vehicles, the R-Line trim level also adds sportier exterior styling elements, including model-specific front and rear bumpers, and a rear spoiler. Unlike the Jetta, though, VW doesn’t offer a particularly vibrant color pallet to match the R-Line styling features.

The understated styling approach carries over to the interior, which has a clean, functional, design. Instead of trying to cram the biggest screen possible into the dashboard, VW opted for more analog controls, which are all well placed for easy use. The dashboard is also short and fairly low—enhancing forward visibility. A fairly low beltline provides good side visibility as well, avoiding the bunker-like feel of many modern cars. The only questionable design decision was the flat-bottomed steering wheel, which seemed out of place in such an un-sporty car.

Some new-car buyers might find the interior a bit plain, however, as the only brightwork is some silver-colored plastic trim. Materials aren’t fancy either: you mostly get plastic, with cloth upholstery on S models and V-Tex leatherette on the SE and R-Line trim levels. However, fit and finish were excellent, and the material choices seemed appropriate given the Passat’s pricing and market positioning as a value option. 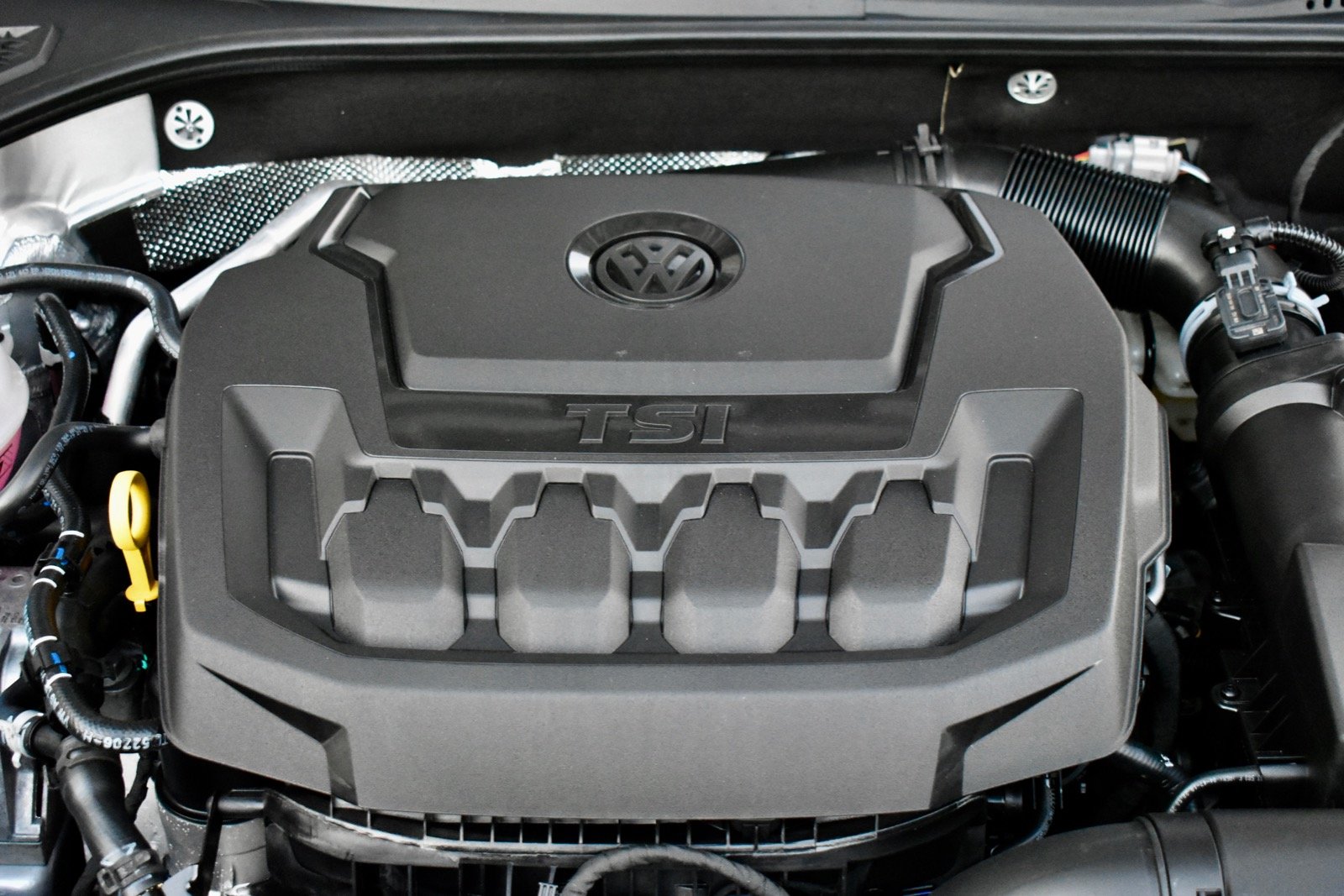 While most competitors continue to offer multiple powertrain options, Volkswagen has pared things down to one setup. Every 2021 Passat gets a 2.0-liter turbocharged four-cylinder engine with a six-speed automatic transmission and front-wheel drive (FWD). While VW has offered 4Motion all-wheel drive (AWD) on the Passat in the past, it’s no longer available.

The turbo-four engine makes 174 horsepower and 206 pound-feet of torque. The horsepower figure is a bit below average compared to rivals’ base powertrains (again, most competitors offer additional powertrain options as well), but the torque output is more impressive. It’s even enough to spin the wheels while pulling away from a stop if you’re not careful.

Once up to speed, power delivery felt uneven, with slower response when accelerating for highway overtakes, but that was cured by switching to Sport mode (which holds higher rpm) or manually selecting gears with the shift lever (R-Line models get paddle shifters). The need to shift suggests that a proper manual transmission would be useful here, but it’s not available.

Nothing else about the driving experience really stood out. VW didn’t go out of its way to make the Passat sportier, or more comfortable, than the average car. The Passat is just a plain midsize sedan that won’t offend, but won’t wow either.

That used to be enough in a midsize sedan, but now the Honda Accord, Mazda 6, and even the once-bland Toyota Camry offer some degree of sportiness. In contrast, the Passat didn’t provide much excitement on twisty roads. On the highway, ride quality and cabin noise levels were good, but not remarkable. 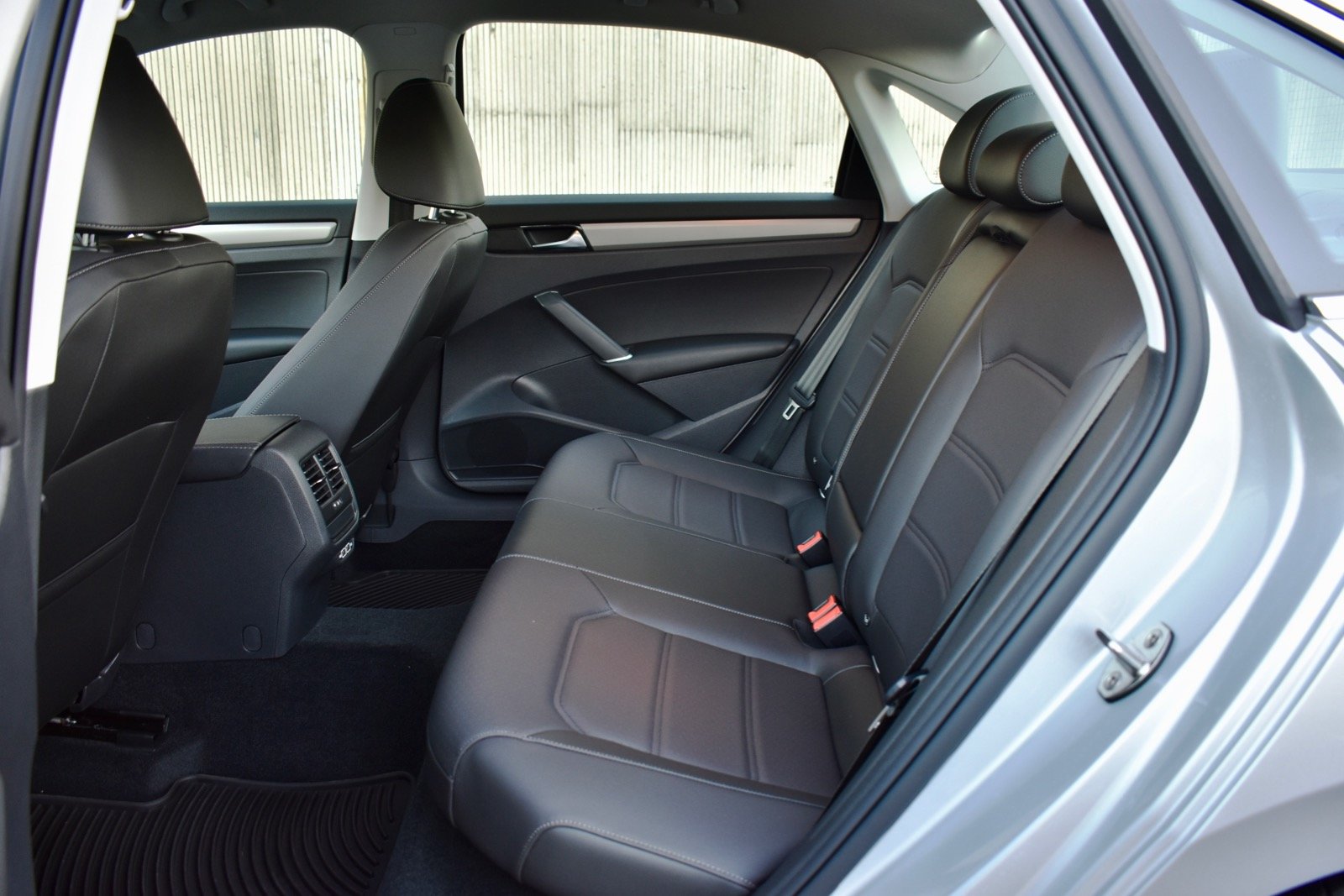 Volkswagen is quick to tout the Passat’s roomy back seats, quoting 39.1 inches of rear legroom, but that’s still slightly less than what you get in the rear seat of a Honda Accord or Subaru Legacy. It also seems to come at the expense of front legroom, where the Passat is a bit below average for the segment. Front headroom is further behind most other midsize sedans as well.

Subjectively, the Passat had one of the most uncomfortable driving positions of any midsize sedan. Limited front legroom means even medium-sized drivers will have trouble getting close enough to the steering wheel and pedals without having their knees up against the dashboard. The front seats also lacked thigh support, while the rear seats felt flat and hard.

At 15.9 cubic feet, the Passat has more cargo space than the Toyota Camry, Subaru Legacy, or Nissan Altima, but less than the Honda Accord and Hyundai Sonata. In cabin-storage space is fairly limited as well, but that’s not unusual for a sedan. Door bottle holders were also improperly shaped for holding large bottles flat, and while VW did provide a handy flat cubby for smartphones, it may be too small for the largest phones.

One area where the Passat excelled as the layout of its controls. VW opted for big buttons and knobs, most of which are concentrated in a small area within easy reach from the driver’s seat. Analog gauges seem to be falling out of fashion even on lower-priced cars, but the Passat’s instrument cluster was easy to read, and a good fit aesthetically with the rest of the interior. 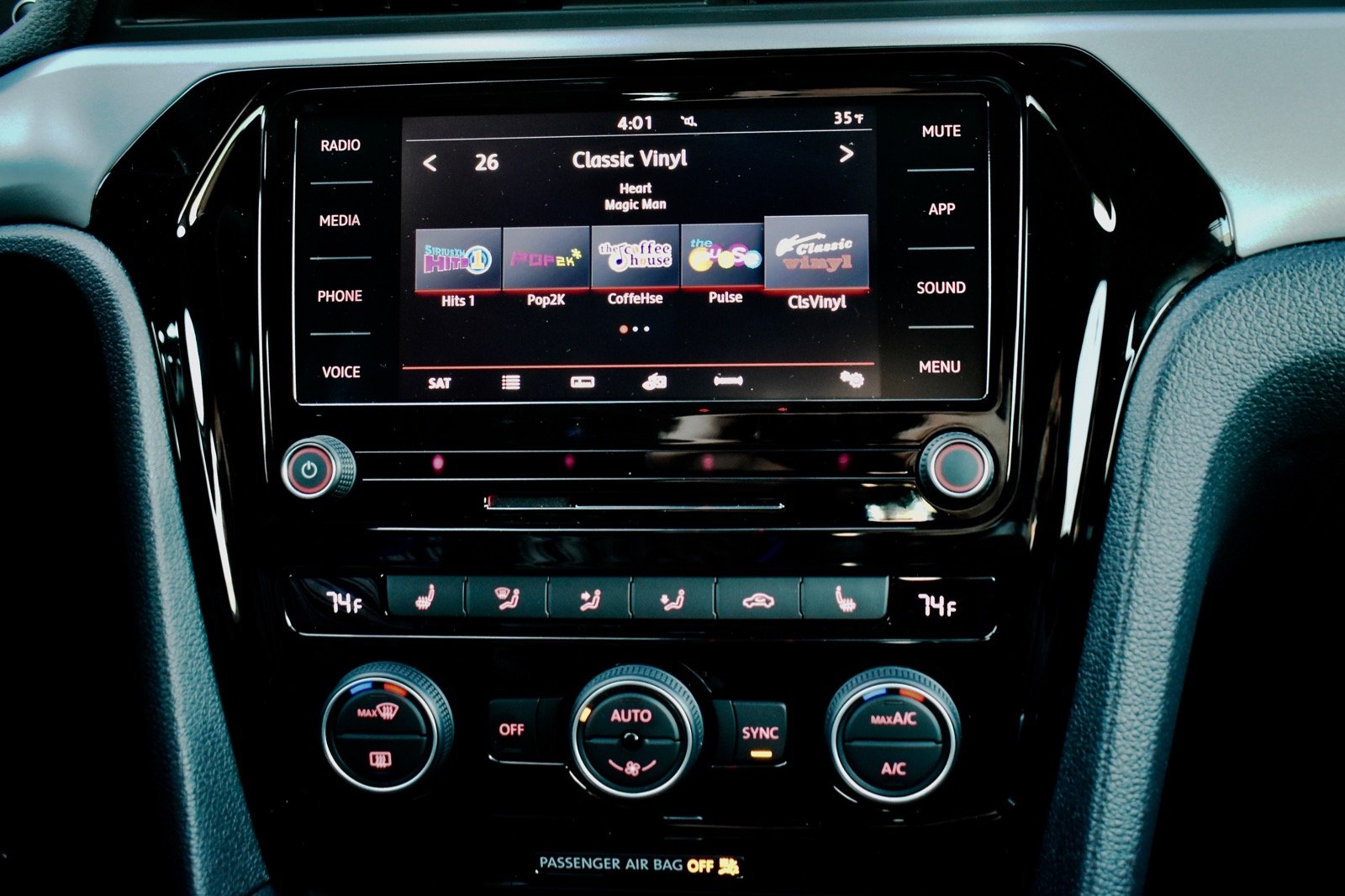 A single USB-A port in the center stack is standard and handles connectivity functions, while SE models add two rear charge-only USB-A ports. If your device uses the newer USB-C standard, you’re out of luck.

The touchscreen is fairly small by today’s standards, but at least includes pinch-to-zoom capability. We also found it largely unnecessary to use the screen for basic functions like climate control and audio, thanks to the dashboard knobs and steering-wheel controls. That might disappoint tech-savvy buyers, but it seemed like a good approach for ordinary drivers that just want a car, not a four-wheeled smartphone.

Tech enthusiasts may also bemoan the lack of flashy features. The Passat doesn’t get the Digital Cockpit instrument cluster or the newer MIB3 infotainment system available in some other VW cars for the 2021 model year, and its driver aids are fairly basic (see below). If you just want something simple and don’t care about a laundry list of tech features, though, the Passat might be worth a look. 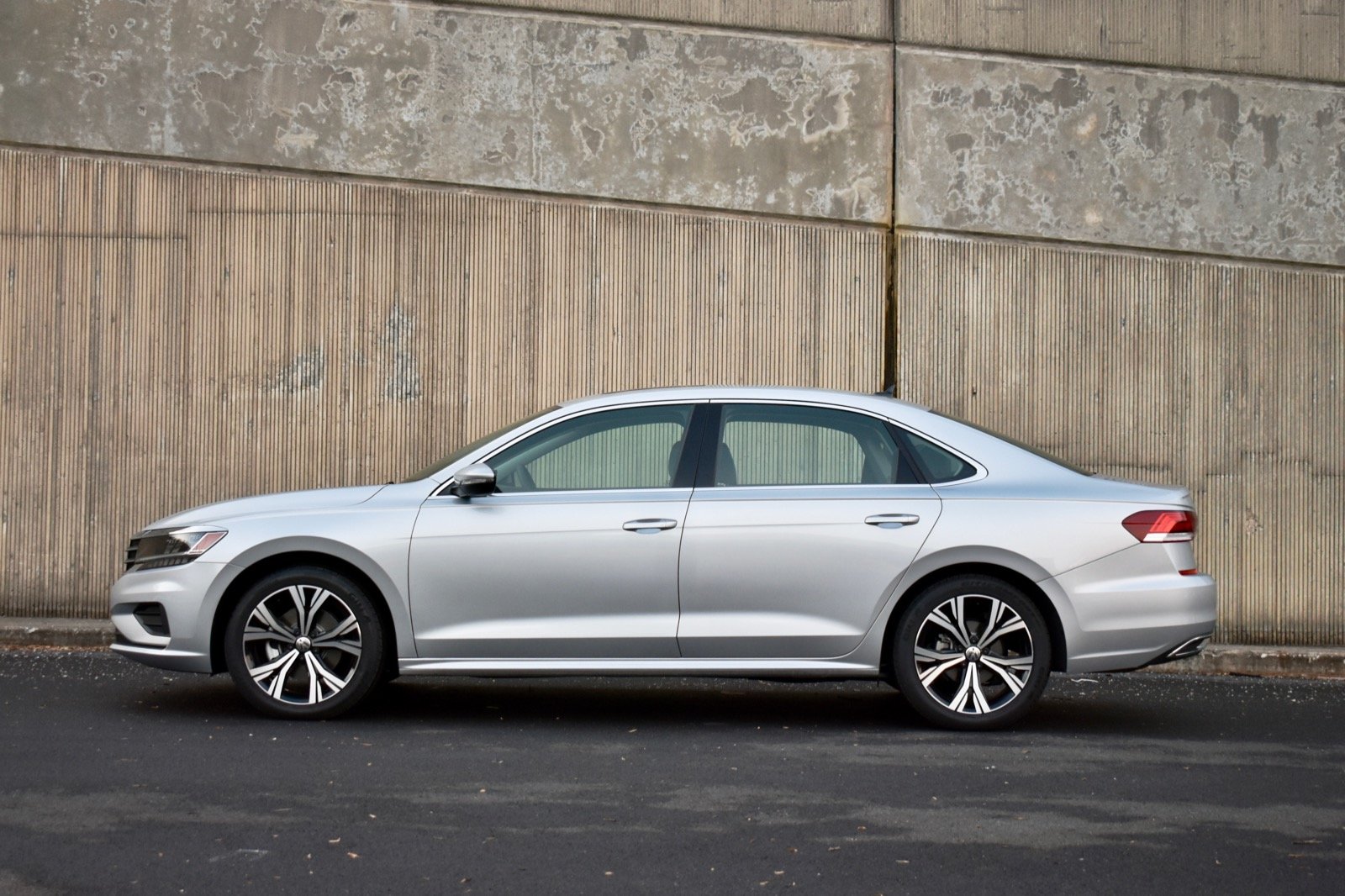 The Insurance Institute for Highway Safety (IIHS) gave the 2021 Passat top “good” scores in all crash tests, but the standard headlights only earned a “marginal” rating. The National Highway Traffic Safety Administration (NHTSA) hasn’t published crash-test ratings for the 2021 Passat.

Volkswagen made adaptive cruise control standard on all trim levels for the 2021 model year, but that feature was already standard on the Honda Accord, Subaru Legacy, and Toyota Camry. Other available driver-assistance features include forward-collision warning, automatic emergency braking, blind-spot monitoring, rear cross-traffic alert, lane-keep assist, and automatic high beams.

Other notable safety features include the standard with VW’s Automatic Post-Collision Braking System, which automatically applies the brakes to prevent the car from rolling after a collision, and the Intelligent Crash Response System, which automatically shuts off the fuel pump, unlocks the doors, and switches on the hazard lights after a collision. 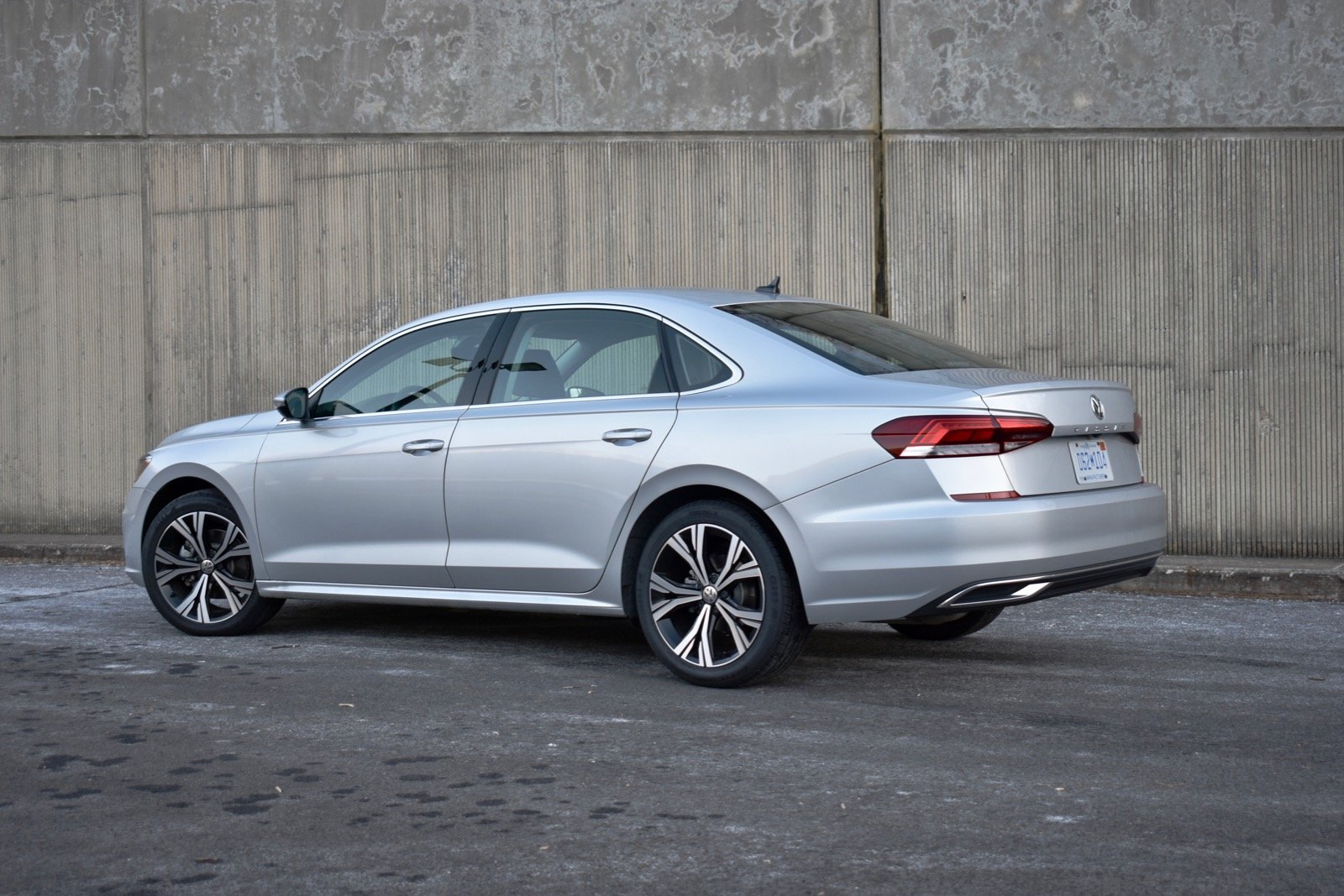 EPA-estimated fuel economy for the 2021 VW Passat is 28 mpg combined (24 mpg city, 36 mpg highway). That’s a bit below average, as the Honda Accord, Hyundai Sonata, Nissan Altima, and Toyota Camry are all rated at just over 30 mpg combined with their base four-cylinder engines. Honda, Hyundai, and Toyota also offer optional, more fuel-efficient, hybrid powertrains, albeit at extra cost.

Pricing for the base Passat S trim level starts at $24,990 (including a mandatory $995 destination charge)—a $1,075 increase over the 2020 model. Our mid-level Passat SE test car had a base price of $27,990, while the top R-Line trim level starts at $30,990. The base MSRP is about the same as most other midsize sedans, but their prices can also rise much higher with options. That lower price cap leaves more room for the Arteon in VW's lineup.

VW offers a four-year, 50,000-mile new-vehicle warranty and, unlike most other car brands, it can be transferred to subsequent owners (assuming you plan to sell your car before the relatively short warranty term expires). VW also offers free scheduled maintenance for the first two years or 20,000 miles, also transferrable to subsequent owners.

The Passat is a well-executed midsize sedan that will likely make a good daily driver, but it’s hard to think of a reason to buy one. That’s because, in addition to nailing the basics like VW, rivals offer more. Whether it’s style, driving dynamics, tech, or gas mileage, most other midsize sedans have at least one standout feature to justify choosing them. We can’t point to anything like that on the Passat. It’s just an average car in a crowded segment.

What's your take on the 2021 Volkswagen Passat?

Guru916XR9 I just drove the 2021 passat over 1600 miles to South Carolina from New York and back last week. The car performed very well and very comfortable. it drives so smoothly over the rough roads of NY. to the smooth rolling hills in SC. was a joy to take this trip in this car.

Have you driven a 2021 Volkswagen Passat?
Rank This Car

Enter your zip to see incentives for a new Passat in your area.