Looking for a New Volkswagen Atlas Cross Sport in your area?

This two-row version of the VW Atlas is a car you might think you need, but probably don’t. 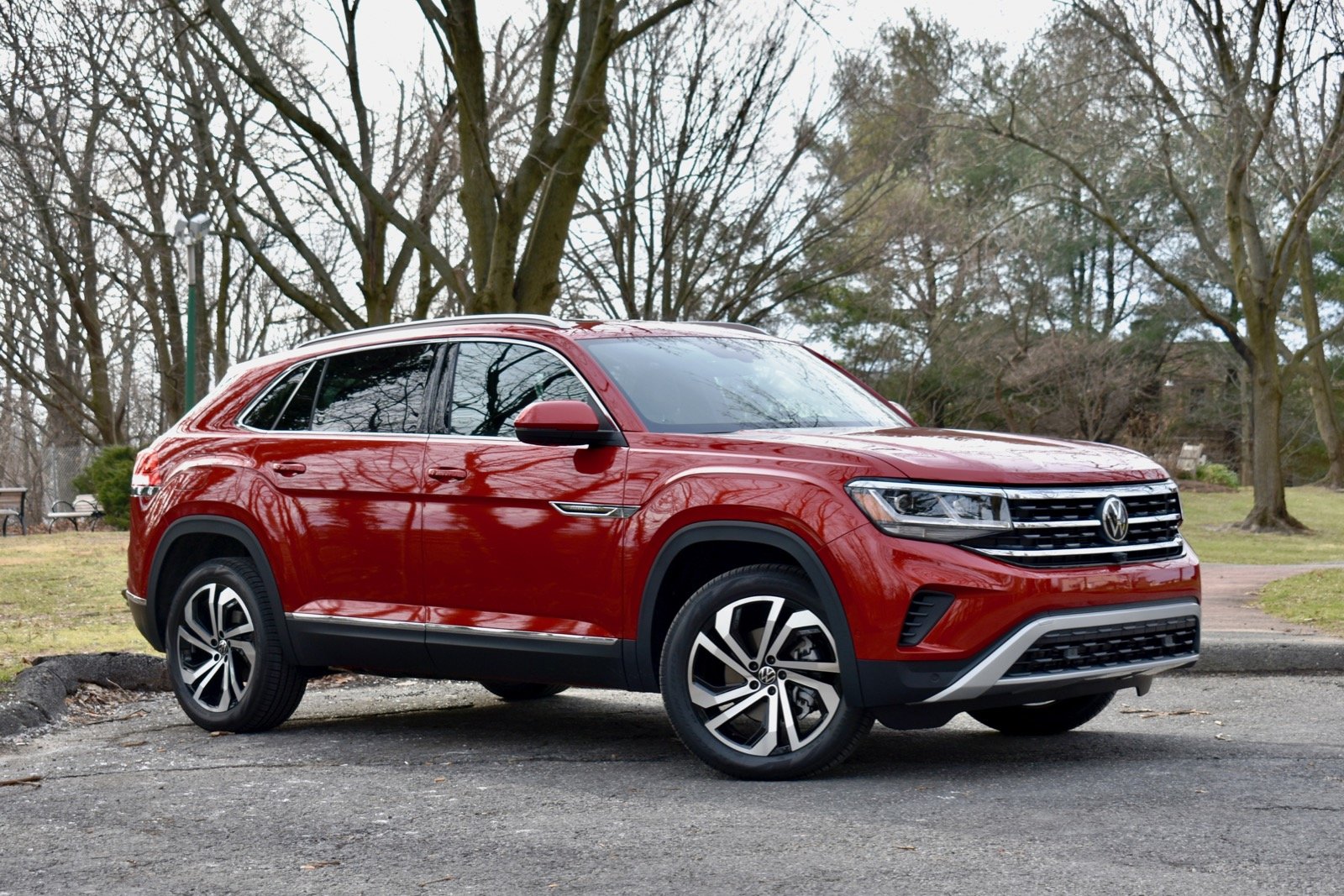 The two-row midsize crossover segment is experiencing a resurgence, with newer models like the Cross Sport, Toyota Venza, Honda Passport, and Chevrolet Blazer joining the aging Ford Edge and Nissan Murano. VW also named the Jeep Grand Cherokee as a competitor to the Cross Sport, but the Jeep is a more traditional SUV.

Typically for a model entering its sophomore year, the Cross Sport doesn’t get many updates for 2021. The only changes are VW’s new MIB3 infotainment system for most trim levels, and two new driver-assist features: Travel Assist and Emergency Assist. 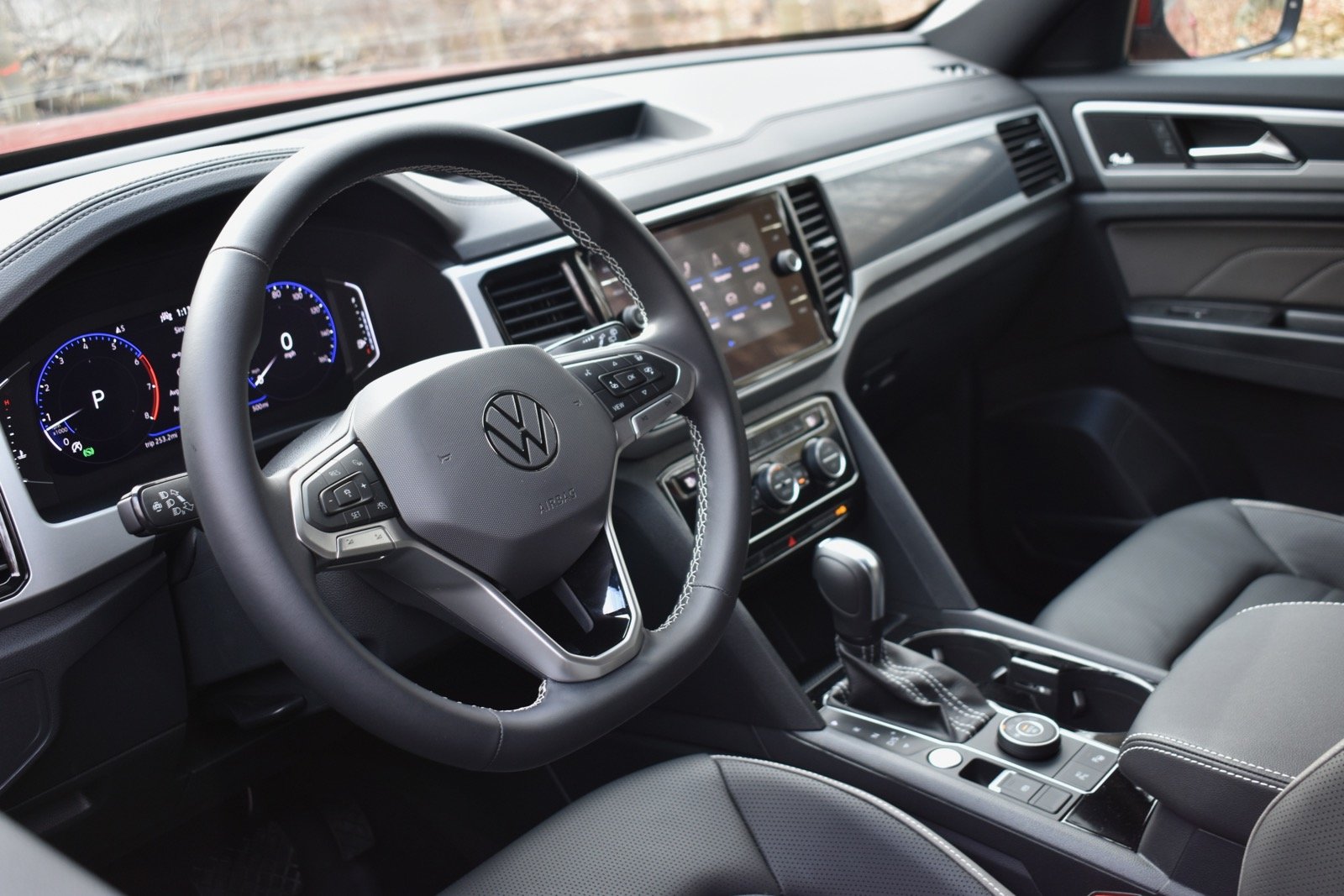 The Cross Sport carries over most of the same sheet metal from the regular Atlas, but with a low roofline and aggressively-raked rear hatch. That makes it a bit like the “crossover coupes” offered by luxury automakers but, as with those vehicles, the styling is an odd mix of SUV ruggedness and more car-like features. The fake exhaust tips carved into the rear bumper of our SEL Premium test vehicle also looked tacky.

The Cross Sport is 5.2 inches shorter and 2.2 inches lower than the seven-seat Atlas, with the same 117.3-inch wheelbase as the three-row model. Both Atlas models ride on VW’s MQB platform, which underpins most of the automaker’s current lineup, including the smaller Jetta and Golf.

All Cross Sport models get standard LED exterior lighting, including headlights, taillights, and daytime running lights. The Atlas S and SE trim levels get 18-inch alloy wheels, while the SE with Technology trim level gets 20-inch wheels, and the SEL R-Line and SEL Premium R-Line roll on 21-inch wheels. As with other VW models, the R-Line adds sportier exterior styling features. For the Cross Sport, that includes different front and rear bumpers, a fake rear diffuser, and side skirts.

The interior features VW’s typical minimalist design, which is both nice to look at and functional. However, the design is let down by subpar materials. Even with our SEL Premium model’s leather upholstery (lower trim levels get cloth or leatherette upholstery), and contrast stitching, the interior felt cheap. Besides the rubbery-feeling leather, all you really get is hard plastic or shiny plastic that’s vulnerable to fingerprint smudges.

VW also chose multiple colors that blended together. It took a while to notice that the seat and door inserts were actually brown, not black, like the surrounding pieces. So many dark colors didn’t exactly provide a welcoming feel, either, and the flat-bottom steering wheel seemed like an odd choice for a non-performance model. 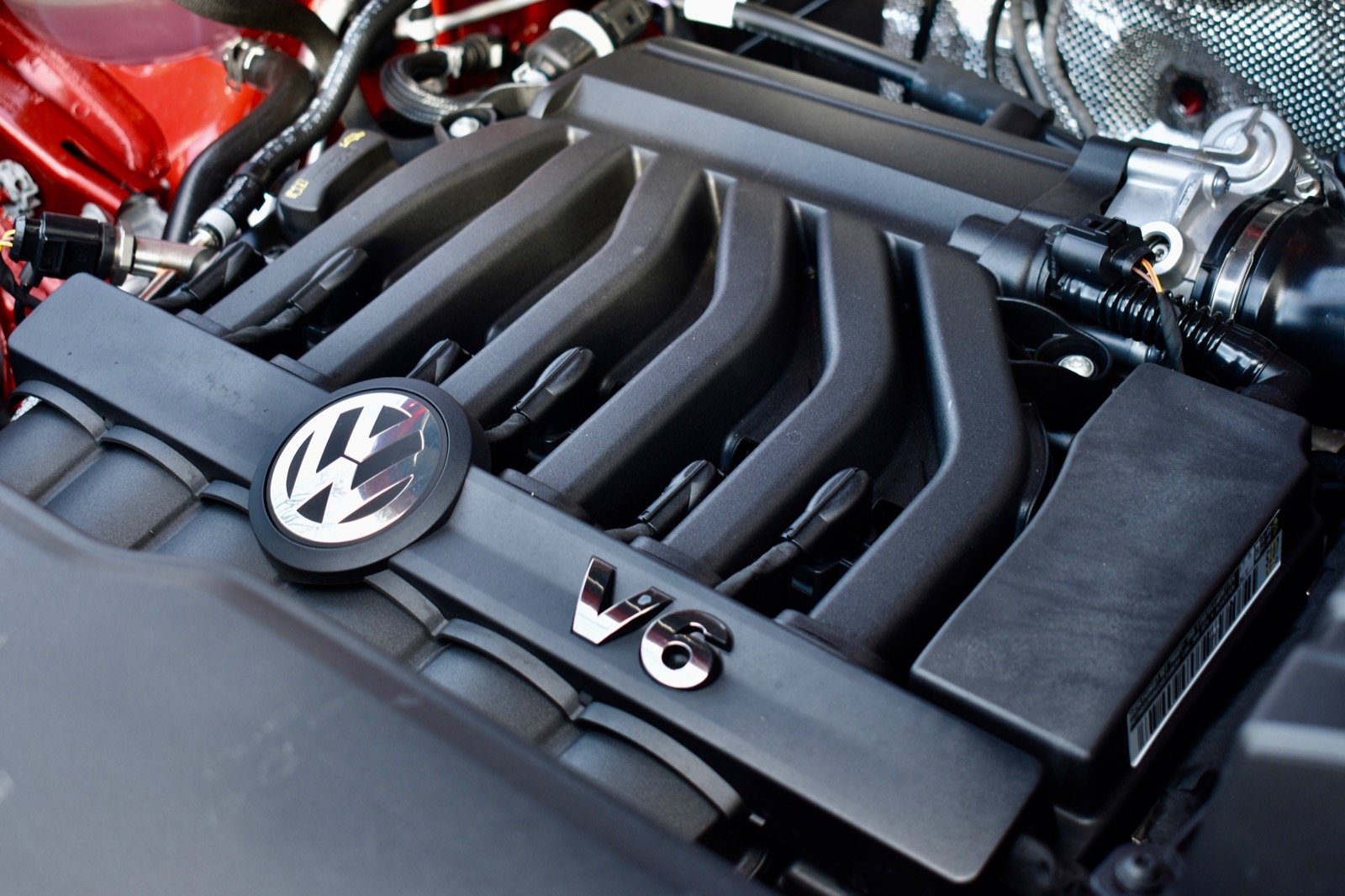 The Cross Sport gets the same powertrain options as the seven-seat Atlas, meaning a standard 2.0-liter turbocharged inline-four, and an optional naturally-aspirated 3.6-liter V6 engine. Both engines come with an eight-speed automatic transmission and start-stop systems for better fuel economy.

The turbo-four engine is part of the EA888 family used in most of VW’s other models. In the Cross Sport, it makes 235 horsepower and 258 pound-feet of torque (on premium fuel). The V6 is actually a VR6, with a very narrow “V” angle. VW developed the VR6 so it could cram six-cylinder engines into small cars, but that wasn’t necessary given the Cross Sport’s cavernous engine bay, which made the VR6 look tiny by comparison. Output is 276 hp and 266 lb-ft of torque.

With the VR6 engine and AWD, our test car felt appreciably livelier when accelerating away from a stop than a four-cylinder Atlas seven-seater we previously tested. The VR6 made a nice sound, too. However, the engine seemed to run out of steam pretty quickly; midrange acceleration didn’t feel nearly as robust as the horsepower and torque figures might indicate. The transmission was also a bit slow to react, but that can be cured by manually shifting using the shift lever (paddle shifters aren’t available).

As with the seven-seat Atlas, ride quality was among the worst we’ve experienced in a modern crossover. Every bump and pothole made its presence felt, and wheels dropping into potholes produced a fairly loud bang, even at low speeds. While other MQB-based Volkswagens have shown luxury-car levels of refinement, the Atlas Cross Sport’s cabin also lets in plenty of wind and tire noise. And while it has “Sport” in its name (plus the same four-wheel independent suspension as the seven-seat Atlas), this SUV didn't feel sporty at all. It handled like a truck, with lots of body roll, and steering so loose it felt like the wheel wasn’t fully attached.

VR6 models have a 5,000-pound towing capacity, about as much as you can expect from a midsize crossover, and get a standard factory-installed hitch. Four-cylinder models are only rated to tow 2,000 pounds, and don’t come with a hitch from the factory (it can be added when ordering or by the dealership, however).

Like the seven-seat Atlas, AWD versions of the Cross Sport get Active Control with multiple drive modes (including Onroad, Snow, Offroad, and Custom Offroad), and 8 inches of ground clearance. If you’re planning to go off-road, though, the Jeep Grand Cherokee is a better choice, thanks to its more sophisticated four-wheel drive (4WD) system and better approach and departure angles. 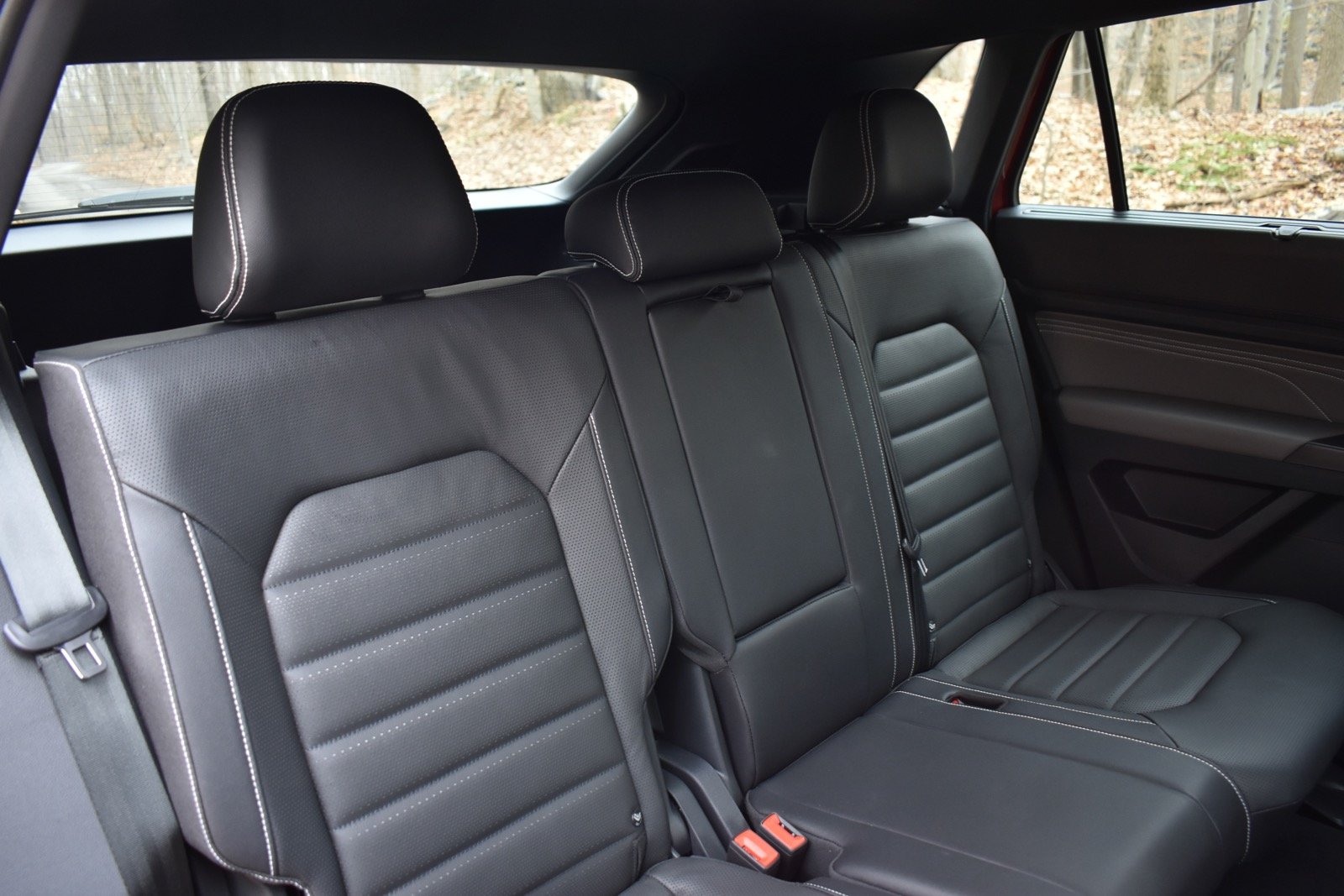 Thanks to a fairly large footprint, the Cross Sport is competitive with other two-row midsize crossovers on interior space. Front-seat and rear-seat legroom are near the top of the class, while front headroom is above average. However, rear headroom is the worst among the VW’s competitive set, thanks to that steeply-sloping roofline. Even medium-height people won’t find much clearance—not something you should have to worry about in a vehicle this big.

VW provided the expected array of cargo nets, cupholders, and storage bins, including a decent-sized center console and a second-row armrest with integrated cupholders. A large, angled cubbyhole ahead of the shifter houses charge ports and should be big enough to hold most phones without allowing them to slide around. 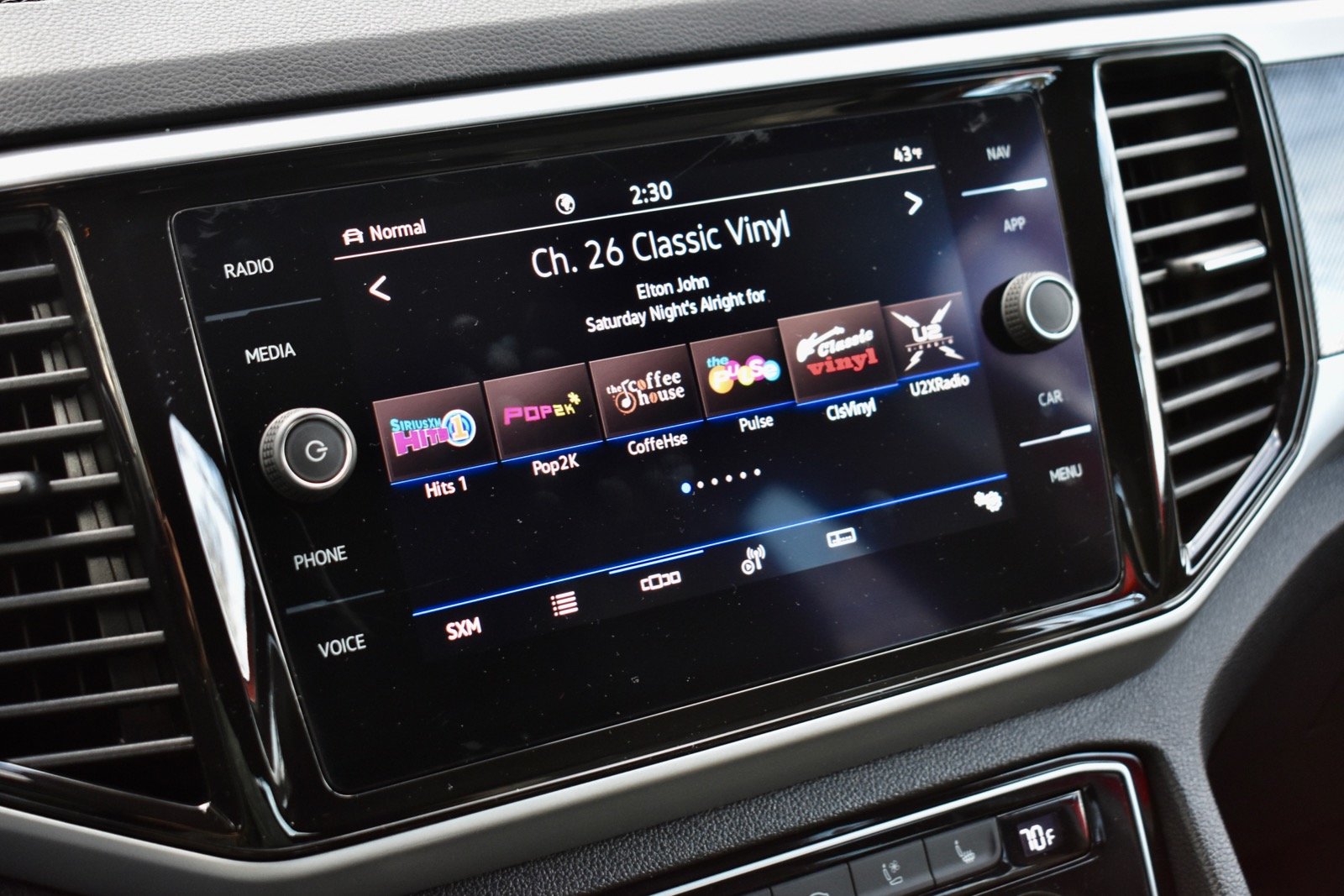 Our test car had the new MIB3 system, which didn’t seem dramatically different from MIB2. Multiple-device pairing is an important addition, but the menus and graphics all looked pretty much the same as what you got in the old system. MIB3 was also very slow to load after starting the car, while the Fender audio system sounded decidedly lo-fi. The voice recognition could be activated only by reaching over and pressing a button on the touchscreen and it still required specific prompts.

The Digital Cockpit display, at least, did feel like a worthwhile piece of tech, allowing the driver to switch from traditional gauges to text-based configurations that put more information on display. Well-designed analog controls also made the touchscreen largely unnecessary for basic functions like climate control, which might make the Cross Sport a good choice for less tech-savvy buyers. 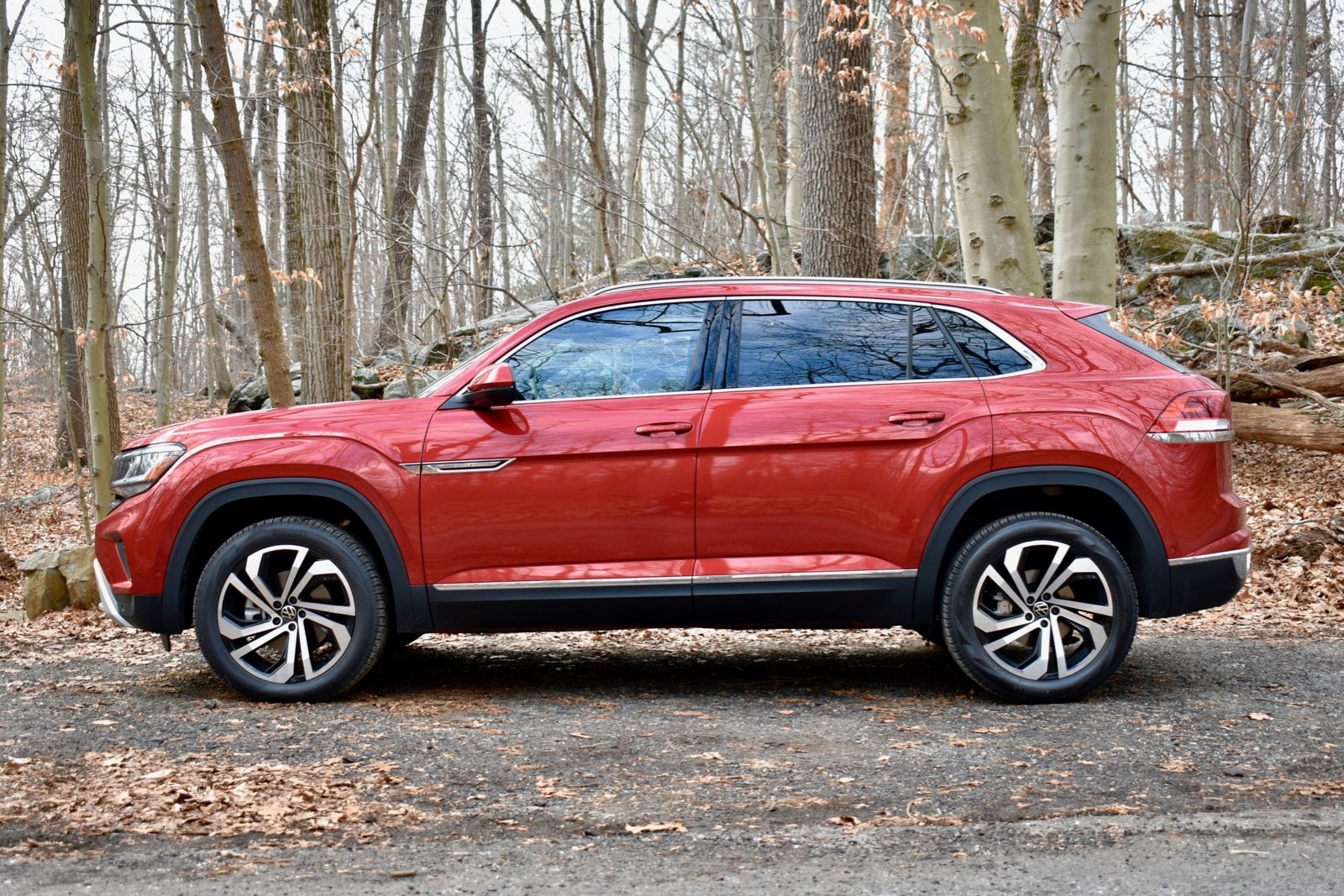 The 2021 VW Atlas Cross Sport earned top “Good” scores in all Insurance Institute for Highway Safety (IIHS) crash tests, but with mixed headlight ratings. Only headlights for the higher-level SEL, SEL R-Line, SEL Premium, and SEL Premium R-Line earned a “Good” score; the rest of the trim levels were rated “Marginal.” The Cross Sport also got a “Marginal” rating for child-seat anchor ease of use.

The National Highway Traffic Safety Administration (NHTSA) gave the 2021 Cross Sport a five-star overall rating, with a five-star rating for side crash tests, and four-star ratings for frontal and rollover crash tests.

However, most competitors don’t have an equivalent to the Cross Sport’s standard Automatic Post-Collision Braking System and Intelligent Crash Response System, which automatically switches off the fuel pump, unlocks the doors, and turns on the hazard lights after a crash.

For the 2021 model year, the Cross Sport adds two new driver-assist features. Available on SEL and higher trim levels, Travel Assist enables automated lane centering at speeds up to 95 mph. Drivers still have to keep their hands on the steering wheel, which has capacitive sensors to detect grip. As with similar systems from other mainstream brands, Travel Assist had trouble with even the gentle curves encountered on highways, and it even had to make lots of small corrections on straight stretches of highway.

The other new driver aid for 2021 is Emergency Assist, which will automatically slow the car to a stop if sensors don’t detect any control inputs. Also limited to SEL and higher trim levels, it’s designed to prevent the car from running off the road if the driver is incapacitated. This kind of tech was previously seen only on luxury cars. 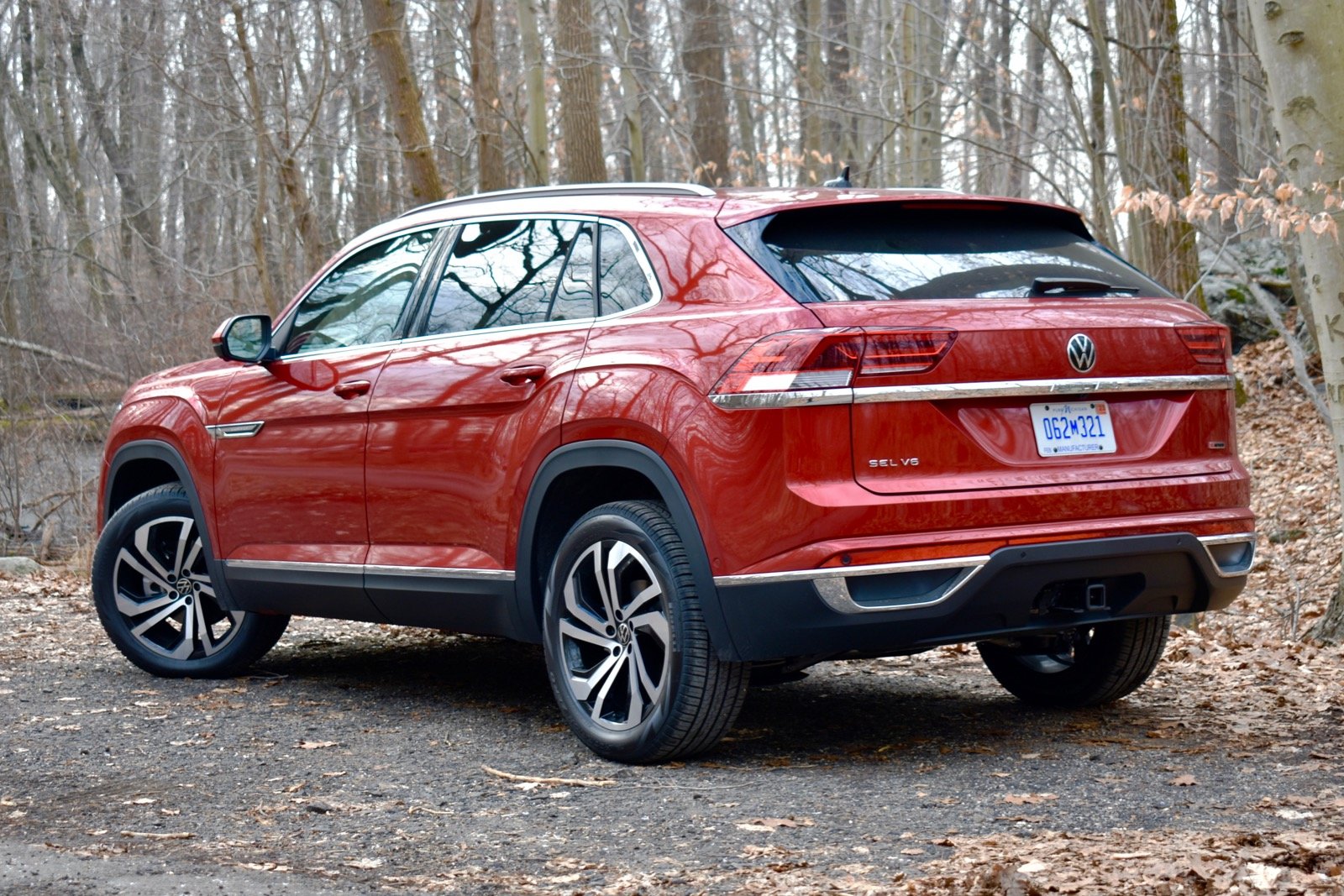 Pricing for the 2021 VW Atlas Cross Sport ranges from $32,050 for a base four-cylinder FWD Cross Sport S, to $51,220 for an SEL Premium R-Line model with the VR6 engine and 4Motion AWD (all prices include a mandatory $1,195 destination charge). Our SEL Premium test car had the VR6 and 4Motion, but not the R-Line package, giving it a base MSRP of $49,250. That makes the Cross Sport a poor value proposition. Base models are not very well equipped and, as the nearly $20,000 difference between base and fully-loaded versions shows, you’ll need to spend a lot more to get the full complement of tech and convenience features.

VW offers a four-year, 50,000-mile new-vehicle warranty, along with two years of free scheduled maintenance, both of which are transferable to subsequent owners. However, that’s only beneficial if the original owner plans to sell their Cross Sport long before the terms expire.

The Cross Sport might seem like the perfect choice for new-car buyers who want a roomy SUV, but don’t need the standard Atlas’ third row. That logic falls apart once you get behind the wheel. The Cross Sport has the same problems as the standard Atlas—terrible ride quality, underwhelming powertrains, and a low-rent interior—but with less rear-seat space. It loses some practicality but gains nothing.

What's your take on the 2021 Volkswagen Atlas Cross Sport?

Have you driven a 2021 Volkswagen Atlas Cross Sport?
Rank This Car

Enter your zip to see incentives for a new Atlas Cross Sport in your area.

Trading In A Brand New Lease

Recently leased a VW Atlas Sport, and am very disappointed, in many directions, that it has a wind whistling noise (when you drive 40mph or over). Disappointed at myself that I never took it on the ...