Looking for a New Toyota Tundra in your area?

In 2021 the Toyota Tundra is showing signs of age, but it's been kept relevant with modern infotainment and safety technologies. 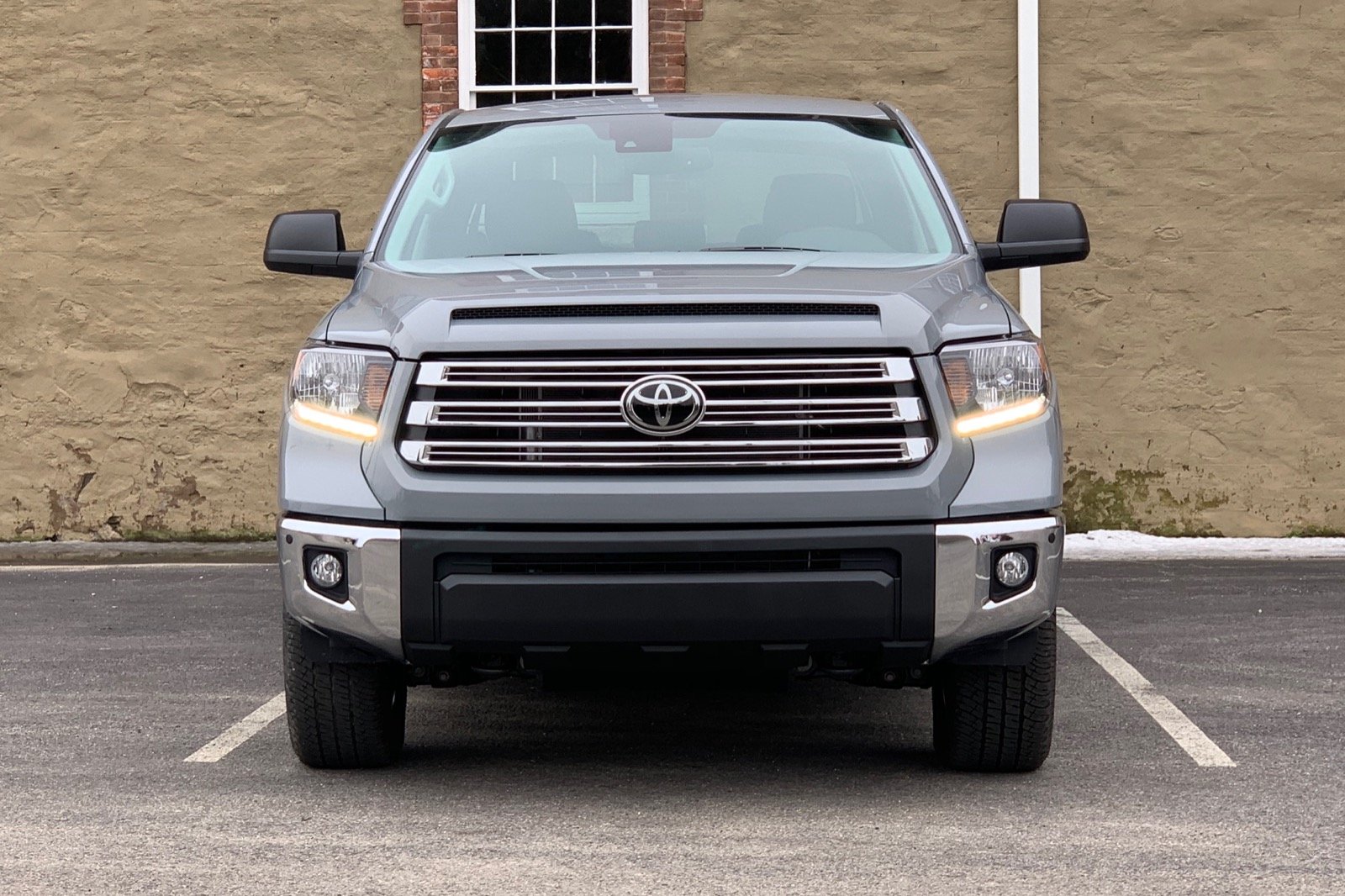 If you’ve been paying attention to any new truck ads, you’ll likely see items being promoted like a massive touchscreen or even a six-way multi-function tailgate. Like the rest of the automotive industry, the truck segment is charging ahead with many new innovations, incorporating new in-car technologies. But this seems like overkill for a segment whose main purpose is to tow, haul, and get work done.

The window sticker for this Toyota Tundra says “2021,” but its design and underpinnings date back to the mid-2000s. It’s the oldest truck in a segment where companies are constantly one-upping and updating. So does the Tundra’s age hinder it among full-size pickups? Not really. In fact, it might be its best attribute. The Tundra might be an old design, but the engineers at Toyota have kept the Tundra relevant with some key updates and special editions. 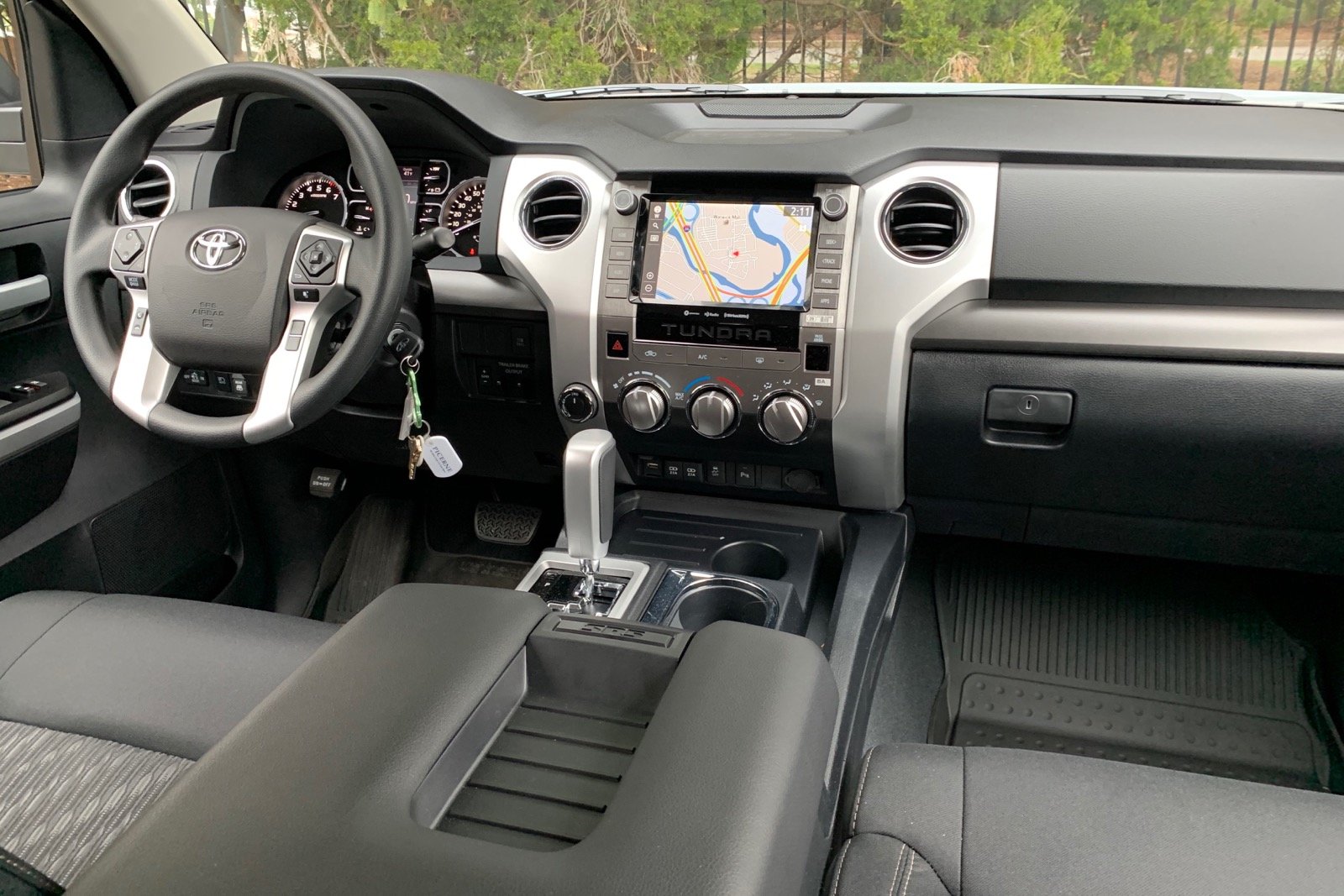 The Toyota Tundra is somewhat awkward-looking compared to other new trucks. It was originally developed in the mid-2000s and released for the 2007 model year. This was a time of transition for cars and trucks, with the latter evolving into the “biggie-biggie” design language that dominates the segment today.

The Tundra has a massive grille, but it also has disproportionately small headlights. The result is a truck that looks oversized in some weird ways. For our test vehicle, Toyota chose the “Cement” paint color. With the blacked-out wheels and badging, the Tundra looks far more modern than its underpinnings.

Like the exterior, the cabin is dated but has contemporary elements. The dash is dominated by hard plastics and big monotone panels. This is truck cabin styling at its most-mid-2010s. But all the buttons and dials are within easy reach, proving that an older design is perfectly fine for a pickup. Compared to the cabin of the new Ram 1500, anyone can get into this truck and know how to use every single feature. The Ram requires a five-minute acclimation session to figure out.

The Tundra interior is decidedly not a luxury cabin or a modern cabin, but Toyota has kept it fresh where it counts. Last year, Toyota added a standard 7-inch infotainment system with Apple CarPlay, Android Auto, and Amazon Alexa. Most drivers have more loyalty to their brand of smartphone than their brand of car or truck, so the infotainment update was absolutely critical.

The Limited provides a lot more content and is the ideal trim for not having to check boxes to get what you want. It adds 20-inch alloy wheels, dual-zone climate control, leather upholstery, and a 10-way power-adjustable driver’s seat.

The TRD Pro shares many of the same features as the SR5, but adds a 2-inch lift, Fox off-road shock absorbers, all-terrain tires, beefed-up skid plates, and a TRD exhaust. It also has unique styling touches, including massive "TOYOTA" lettering in the grille.

For 2021, Toyota has added the Nightshade Edition. This new special edition is available as part of the Limited trim. It adds a dark chrome grille, black wheels, and a number of darkened exterior touches. The Nightshade is only available in certain exterior colors. 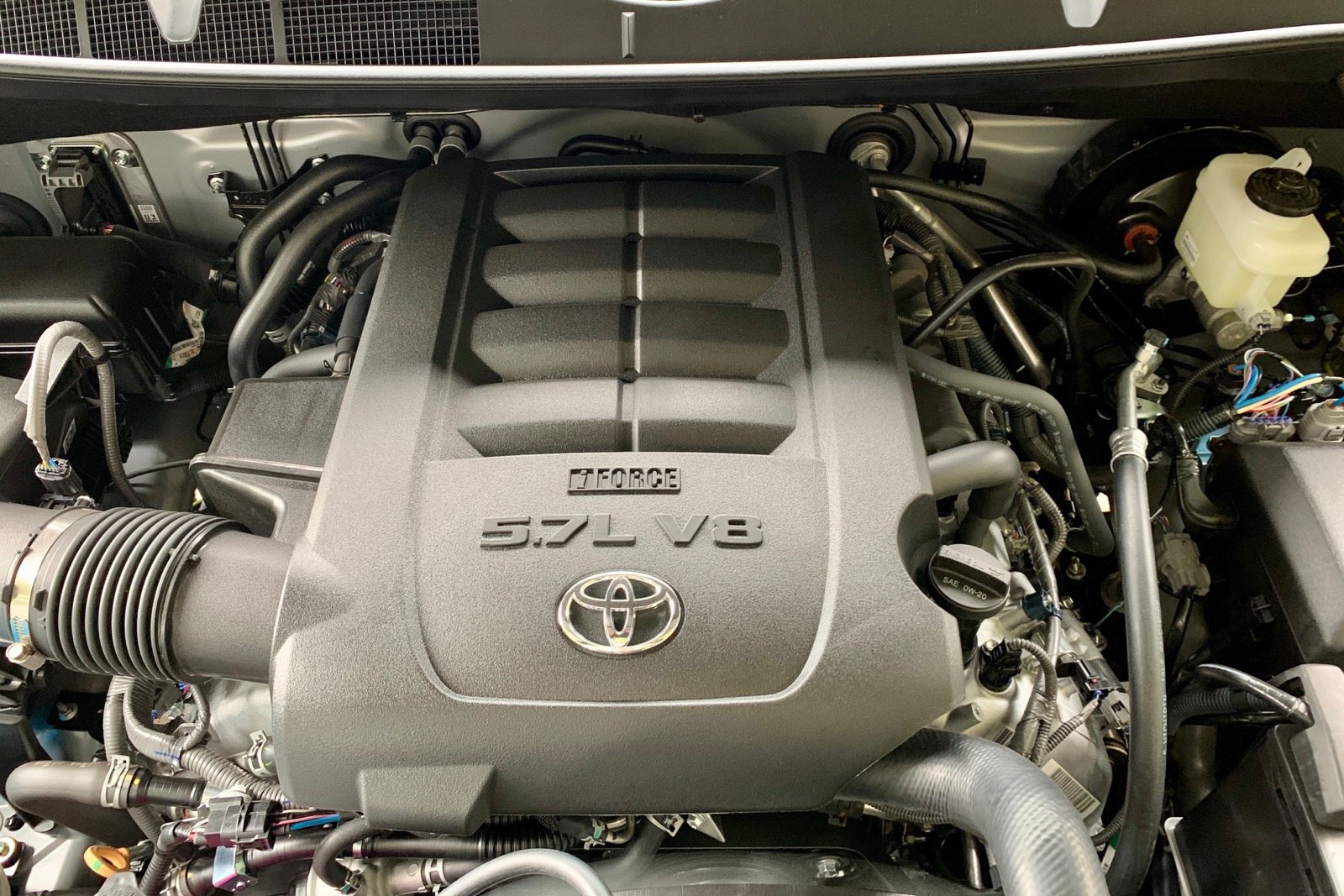 For 2021, the Tundra comes standard with Toyota’s I-Force 5.7-liter V8 engine. In previous years, this was the high-feature powertrain, but Toyota dropped the 4.6-liter V8 after 2019, making the previously-optional 5.7-liter unit the only choice. Given how underpowered and inefficient the 4.6-liter engine was, we’re not shedding any tears over its departure. When properly equipped, the Tundra has a towing capacity of 10,200 pounds and a payload capacity of 1,730. This towing capacity is below that of trucks like the Ford F-150, which can tow up to 13,000 pounds when properly equipped.

The 5.7-liter V8 makes 391 horsepower and 401 pound-feet of torque. Power is routed through a six-speed automatic transmission with a manual tap-shift function. The Tundra comes standard with rear-wheel drive and is available with four-wheel drive with low range—as on our test truck. The traditional shifter design is far more intuitive than some of the newer shifter designs found in other trucks. The downside is those newer trucks have more gears in their transmissions, allowing for better fuel economy and power management. Still, the six-speed automatic is responsive enough and is eager to jump down a gear or two when you lay into the gas pedal. Acceleration from the V8 is strong at both low speeds and high. It’s never overly jumpy, but confident in all scenarios.

The Tundra is comfortable over just about any surface. Though it soaks up nearly any kind of bump in the road, its width ensures it’s never too top-heavy in corners. The steering is vague at low speeds but settles in on the highway. That’s where this truck feels most at-home—cruising along at 65 mph. 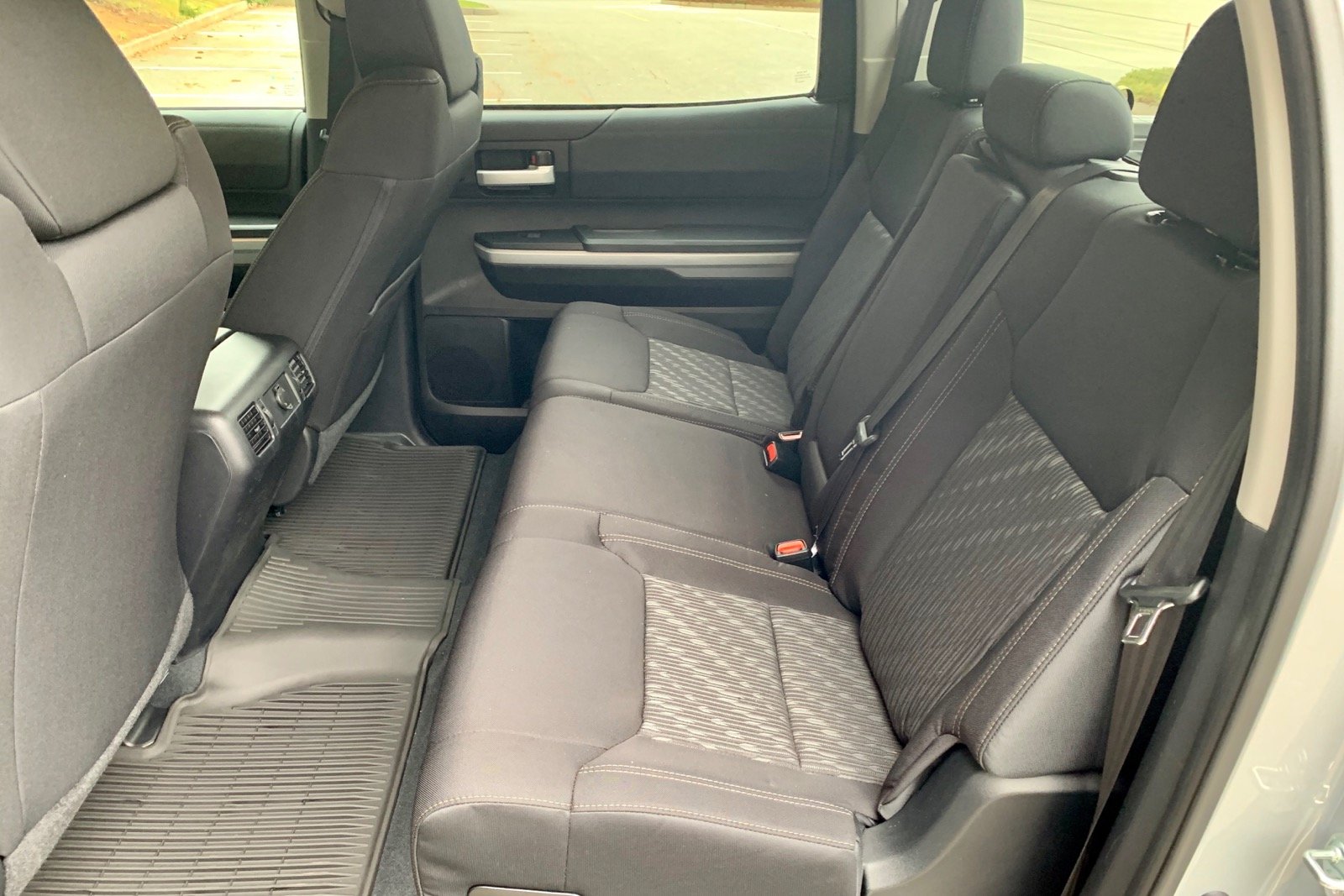 There are two cab sizes and three bed sizes for the Tundra. The Double Cab is an extended-cab pickup. Though it looks like it may have clamshell doors like the F-150, they are actually conventionally-opening rear doors. The Double Cab is available with either a 6.5-foot bed or an 8.1-foot bed. We drove the CrewMax, which is a full four-door crew cab and comes with a 5.5-foot bed. The CrewMax is simply massive. With the front seats positioned as far back as possible, the rear seat passengers still have more legroom than first class on an airliner. The rear seats fold up, providing a large cargo area that’s lockable and protected from the elements.

Our test truck came with the optional in-bed storage lockers. At first glance, these may seem like Toyota’s take on the “RamBox” system from the Ram 1500, but they are not up to that level. These are smaller, and built around the wheel well, making them less useful than the RamBox. Still, if you have items that you wish to keep safe in the bed, it’s better than leaving that item exposed in the bed.

Back to the cab, the front seats have plenty of room and a massive center console. In addition to a deep center compartment, the area around the shifter has three cup holders and plenty of space for phones, keys, and wallets. The doors have trays and multiple cup/bottle holders, but they are not as large as those found in other full-size pickups.

Finally, our test truck came with the optional power rear window. It’s a single pane, opening up the whole rear window, as opposed to the small sliding rear windows on other trucks. This provides clean lines of sight, as well as plenty of fresh air. You can also load longer items into the bed or cab and have them stick through the opening. It’s one of the best features the Tundra has to offer. 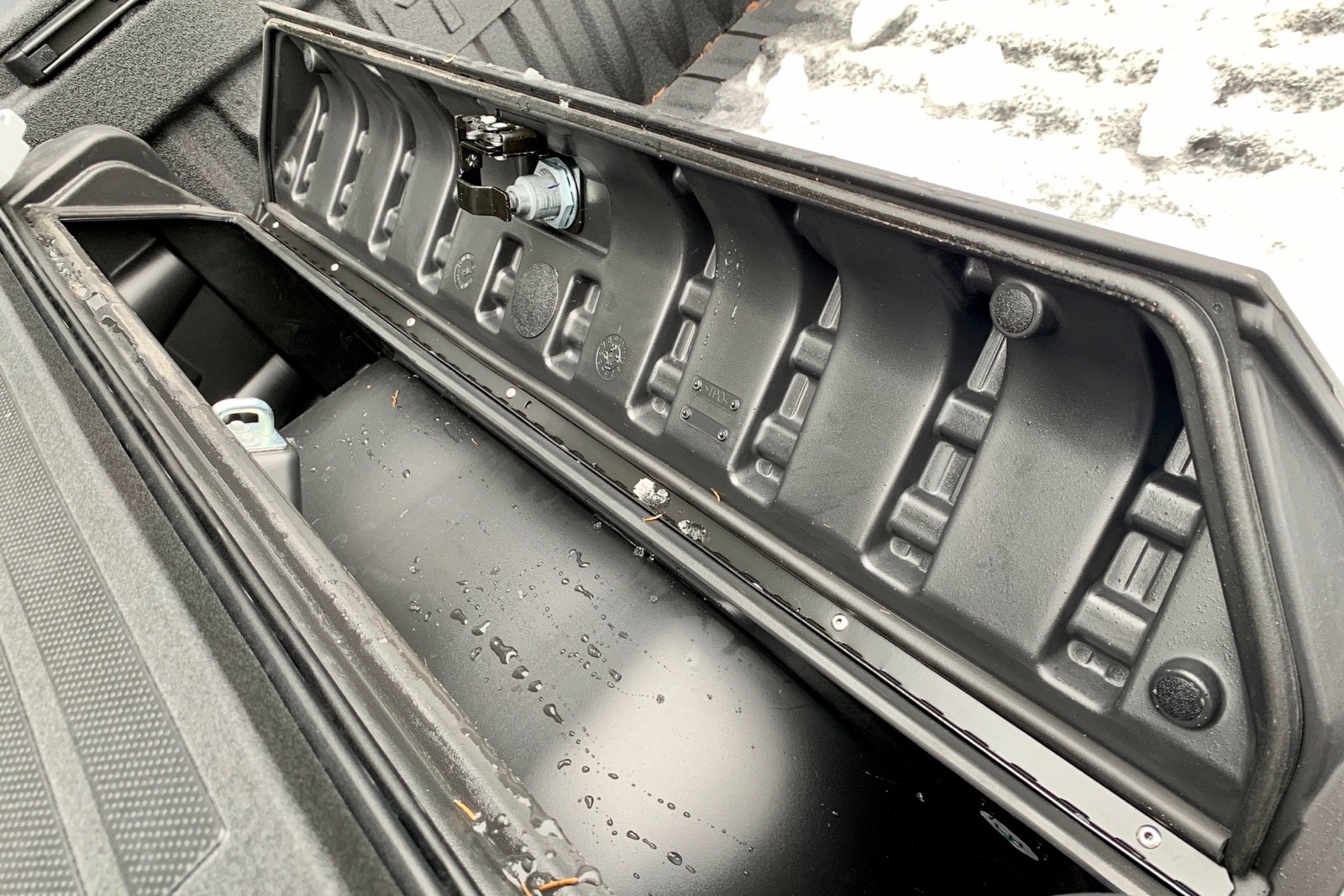 When automakers design a vehicle, they leave the infotainment for last. That’s because the technology has likely progressed from the time of the first CAD renders to the end of vehicle development. Still, the Tundra’s dated underpinnings meant for most of its production life, it had dated cabin technology. Toyota fixed that for the 2020 Tundra, completely updating the infotainment system. That update has been carried into 2021. It comes standard with long-overdue features such as Apple CarPlay and Android Auto. It’s all operated via a standard 7-inch touchscreen or an available 8-inch touchscreen with navigation. The upgraded screen is available with Amazon Alexa.

The touchscreen is easy to operate, has a sensible layout, and has the benefit of redundant hard buttons on either side of the screen. The truck also comes standard with multiple USB ports, Bluetooth connectivity, and three-month trial use of the WiFi hotspot capability.

The Tundra comes standard with a six-speaker stereo. The SR5 trim upgrades that to seven speakers on the Double Cab and nine speakers on the CrewMax. An available JBL premium audio system provides 12 speakers including a subwoofer and amplifier. 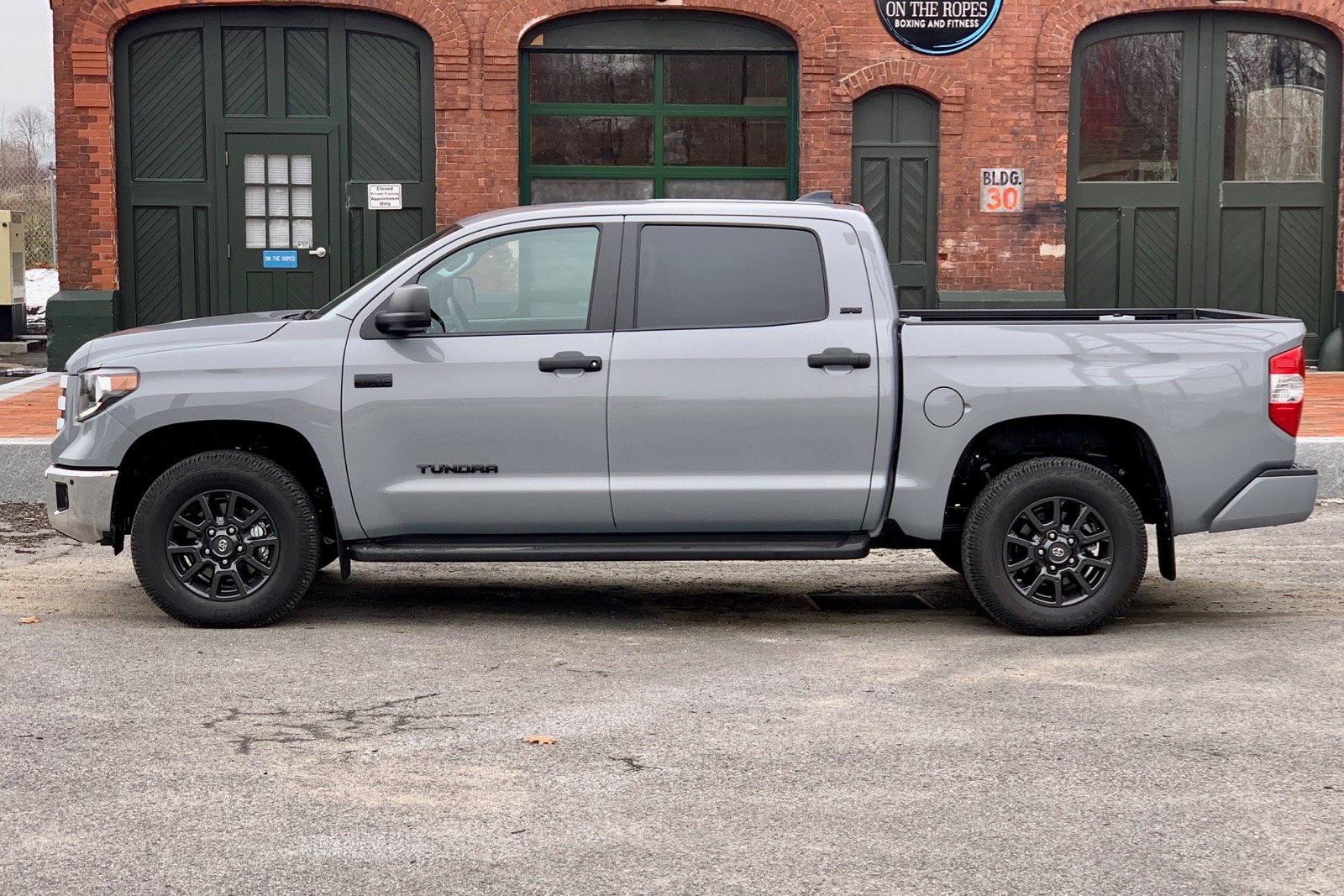 In 2018, Toyota added its Safety Sense P suite of driver-assistance features as standard equipment. This includes forward-collision warning and avoidance, pedestrian detection, lane-departure warning, automatic high beams, and adaptive cruise control. The Tundra was one of the first pickup trucks in the segment to include these advanced safety features as standard equipment. In this sense, Toyota knows exactly how to keep the Tundra up-to-date. Optional safety features include front and rear parking sensors, blind-spot monitoring, and rear cross-traffic alert. 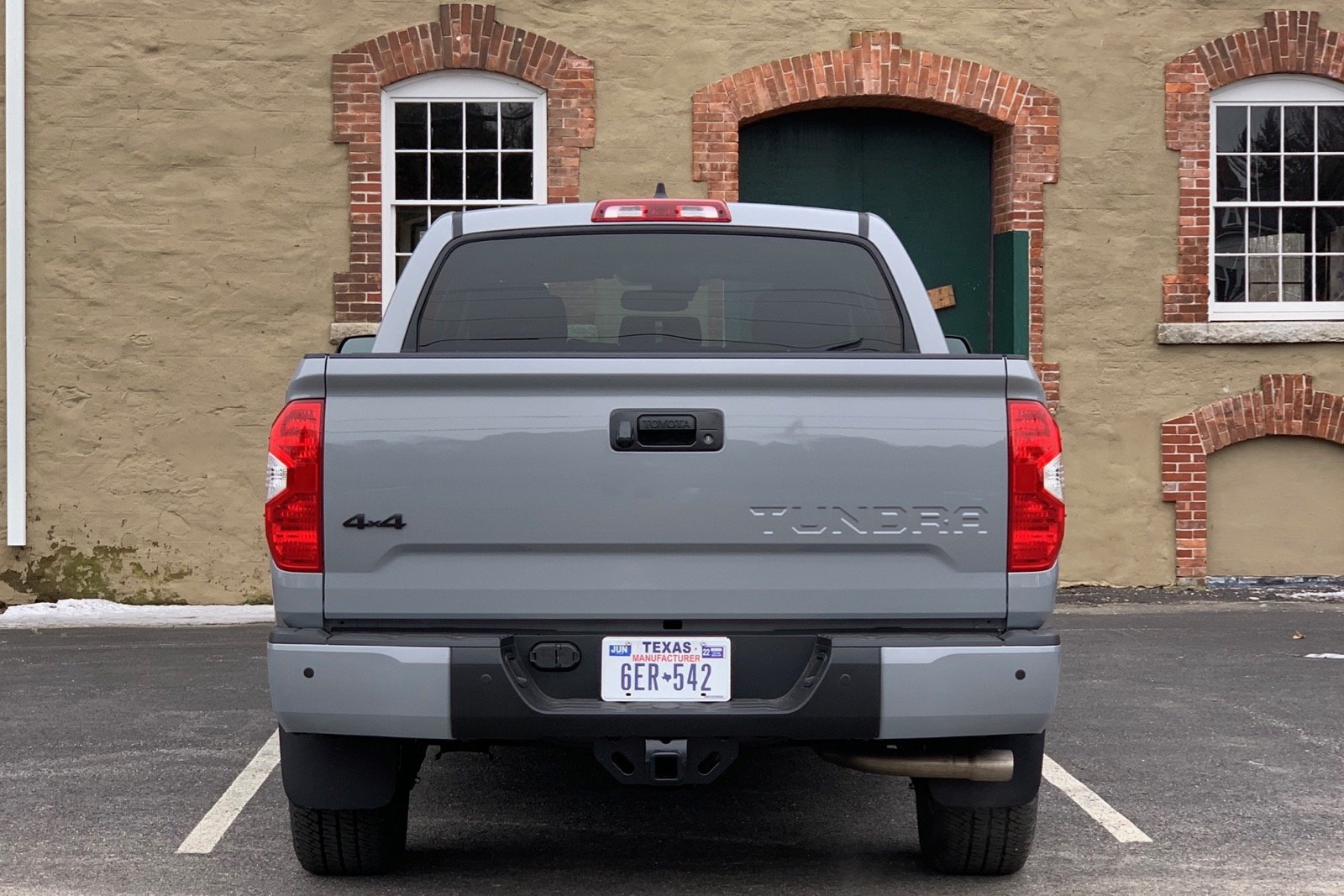 An all-new Tundra is expected to be announced in the second half of 2021 as a 2022 model. That means this current truck is the swan song for the second-generation Tundra. Though it may be a 13-year-old design, Toyota has kept the Tundra relevant with modern infotainment and high-tech safety features. For many truck buyers, this is the perfect combination of old and new. It has those modern features, but it’s still a rugged pickup that can take some abuse. As other full-size trucks have evolved, some have almost become too comfortable for real work. And as the Ram 1500 has shown, there’s such a thing as too much tech in a pickup. In this sense, the Tundra benefits from its age, sticking to what makes trucks so useful, while keeping up with the times.

Donald I purchased a 2021 Tundra Platinum and I am ok with my purchase. I don’t think I will be buying another Toyota. They don’t advance like they once did with their vehicles.

Guru9LYR2K Just bought one and love it! Am a little anxious about fuel consumption which is significantly higher than the numbers noted above. This may have something to do with the engine not being run in.

Have you driven a 2021 Toyota Tundra?
Rank This Car

Enter your zip to see incentives for a new Tundra in your area.