Looking for a New Toyota RAV4 in your area?

The ubiquitous Toyota RAV4 is a competitive compact crossover with a confused personality. 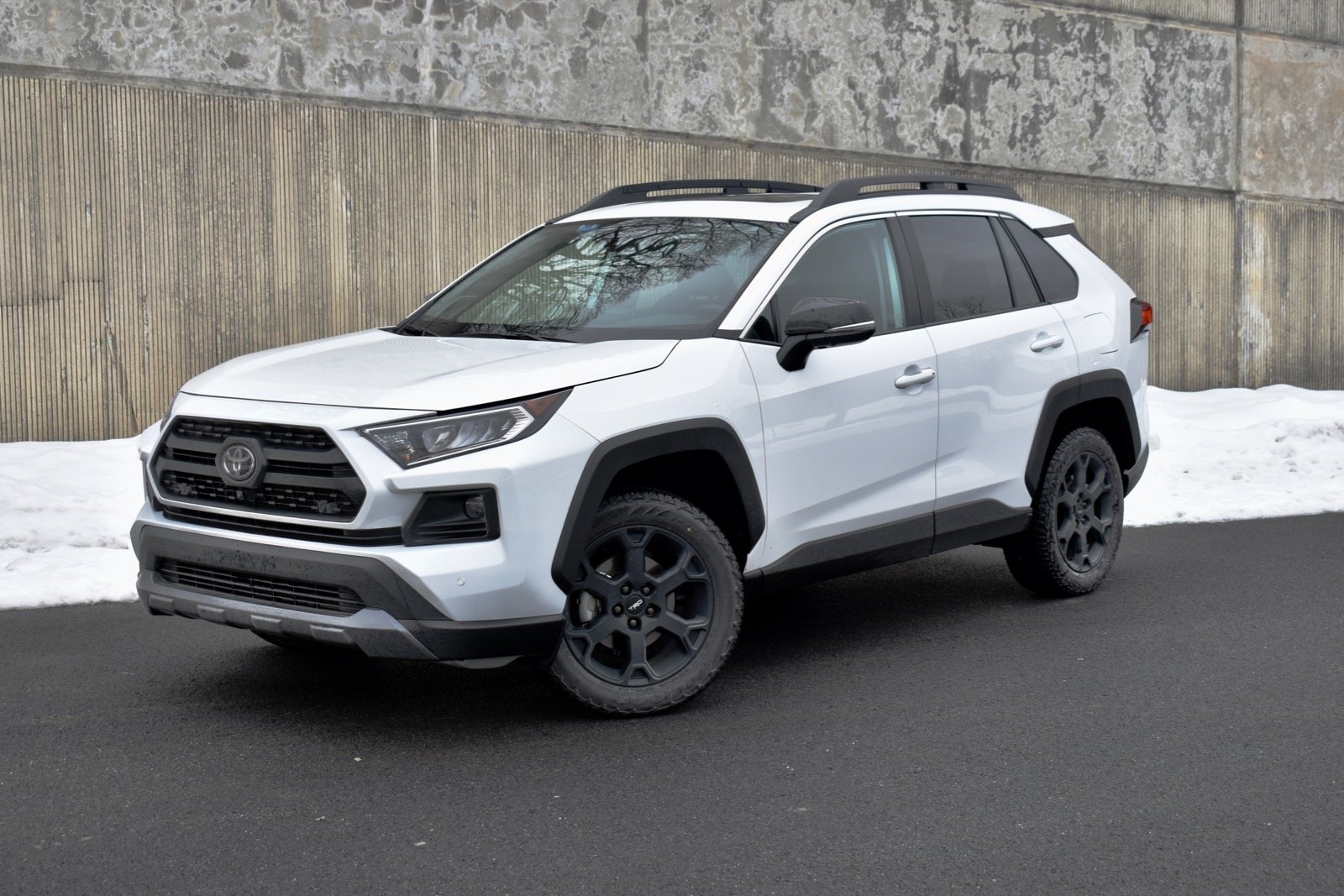 Since its launch in 1997, the Toyota RAV4 has ridden a wave of crossover SUV popularity to become one of Toyota’s bestselling models. Introduced for the 2019 model year, the current-generation RAV4 tries to offer the rugged style of a traditional SUV, but underneath it’s still a car-based crossover pitched against the likes of the Ford Escape, Honda CR-V, Hyundai Tucson, Kia Sportage, Nissan Rogue, Subaru Forester, and Volkswagen Tiguan.

Because it’s only in its third model year, this fifth-generation RAV4 doesn’t get many updates for 2021. The biggest news is the addition of the RAV4 Prime plug-in hybrid to the lineup, but that model actually went on sale last year. The only other changes are a new XLE Premium trim level for the RAV4 Hybrid, and a new front stainless steel front skid plate for the gasoline RAV4 TRD Off-Road model.

We’ve covered the RAV4 Hybrid and RAV4 Prime in separate reviews, so this review will focus on the gasoline RAV4. Our test car was a RAV4 TRD Off-Road, which joined the lineup for the 2020 model year and is the first RAV4 model tuned by Toyota Racing Development, the automaker’s North American performance division. 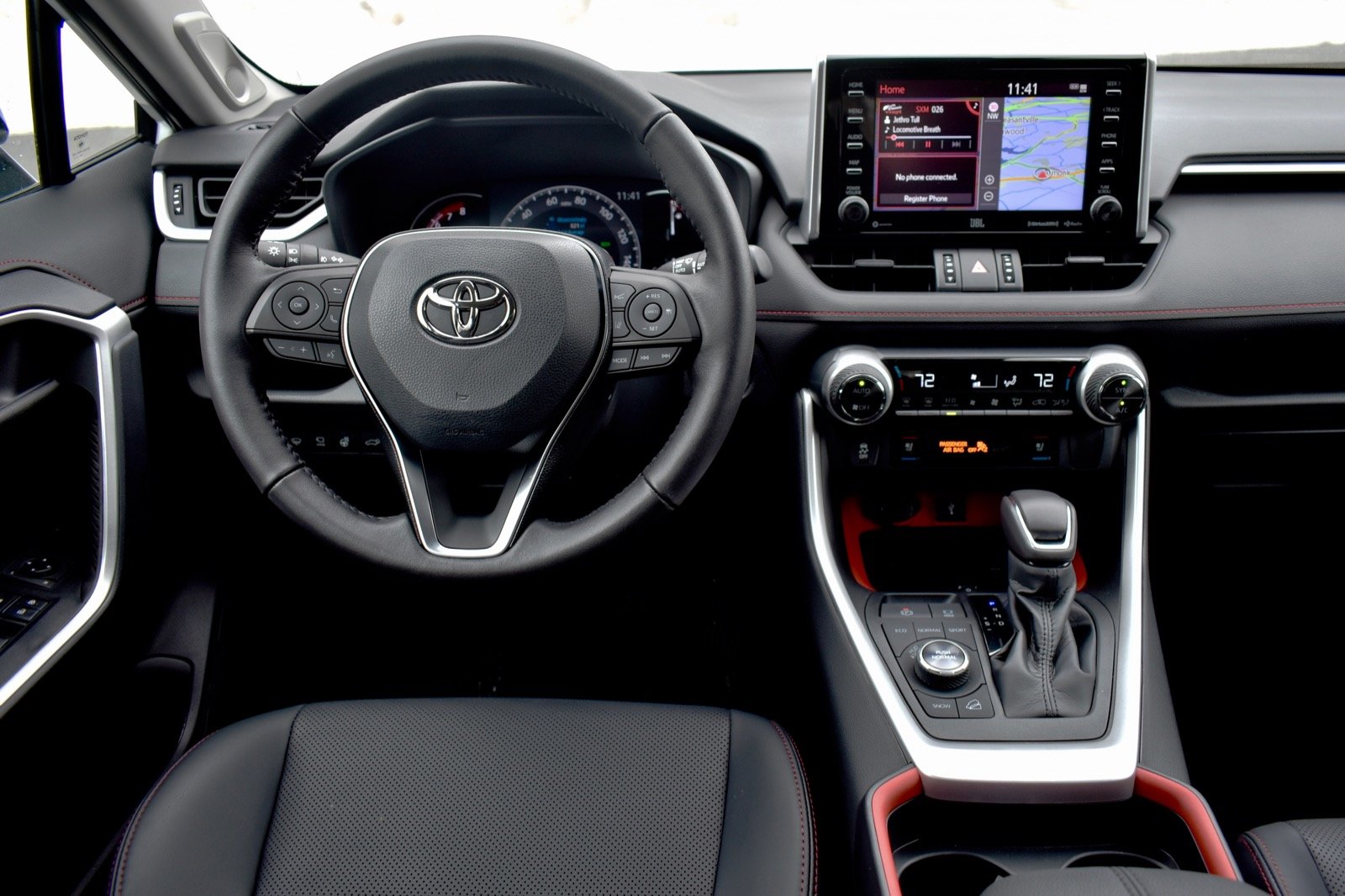 Toyota knows that one of the major reasons buyers choose crossovers over conventional cars is styling, so it gave the RAV4 the rugged-looking exterior of a traditional SUV. The boxy fender flares, chiseled taillights, and scowling front end sharply contrast the more approachable look of previous RAV4 generations, as well as most other compact crossovers on the market today. The exterior is fairly aggressive looking for a family car, but stands out against the competition and adds to the perception that the RAV4 is more than just an ordinary vehicle.

Under the sheet metal, however, the RAV4 is just an ordinary vehicle. It’s based on the Toyota New Global Architecture (TNGA) platform used by most of the automaker’s other models. TNGA is a well-engineered platform that’s served as a solid foundation for sedans, hatchbacks, and the Toyota Sienna minivan, so that’s not a bad thing. It just means that, while the styling says 4Runner, the mechanical bits say Camry.

The interior gets a few rugged styling touches as well, including large rubberized knobs and door handles. Those are functional touches that also help distinguish the RAV4 cabin from those of other Toyota models. Material quality is fairly good on lower trim levels but doesn’t get elevated in step with the price of the highest trims. Our TRD Off-Road test car had SofTex upholstery, which Toyota claims is lighter than leather and fairly durable. That seemed like a good fit for the outdoorsy TRD Off-Road, but you can’t real leather at all, even on the range-topping RAV4 Limited trim level. 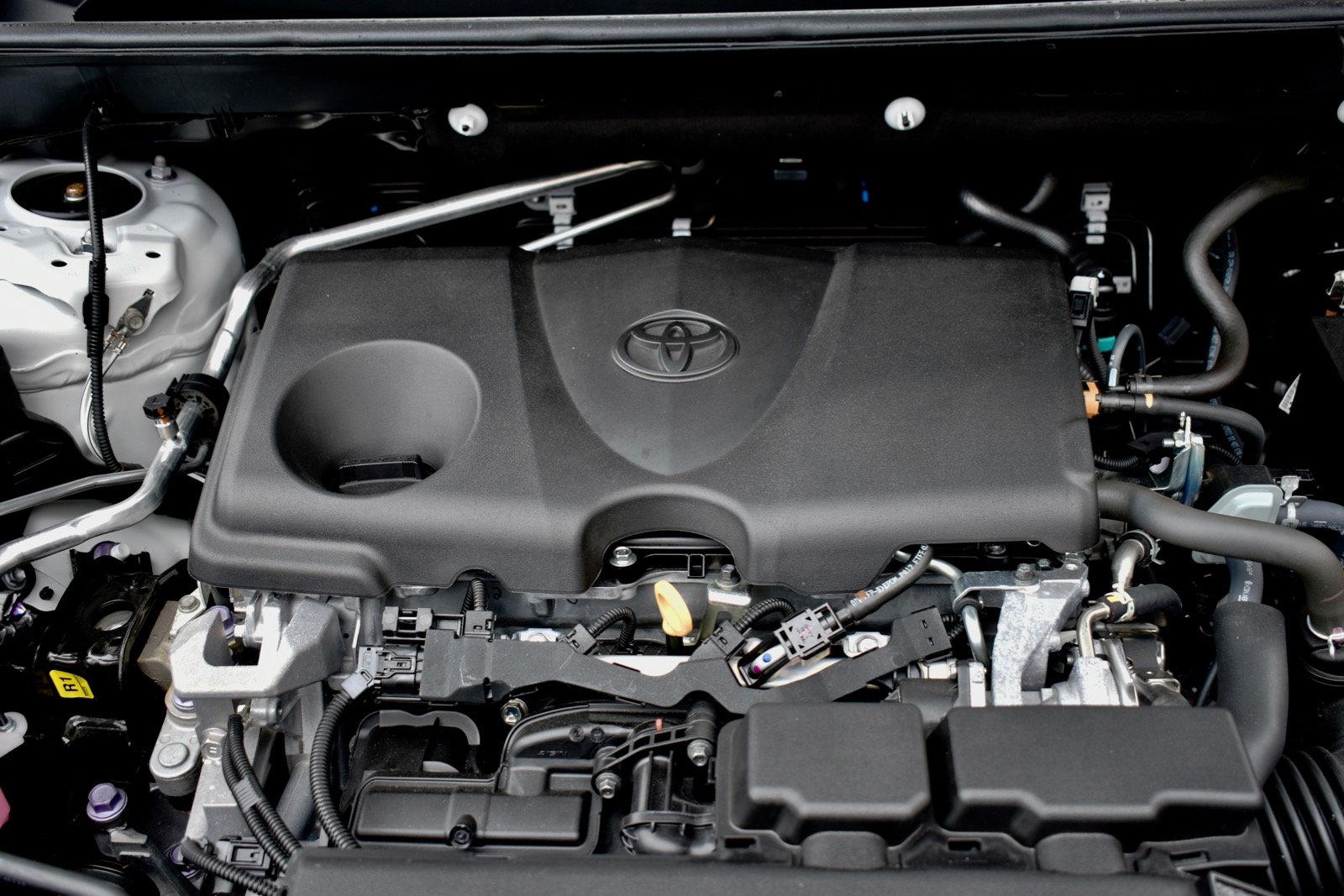 The gasoline RAV4 is available with only one engine. The “Dynamic Force” 2.5-liter four-cylinder engine produces 203 horsepower and 184 pound-feet of torque, and is coupled exclusively to an eight-speed automatic transmission, with standard front-wheel drive (FWD) or optional all-wheel drive (AWD). If you want more power, check out the 219-hp RAV4 Hybrid or 302-hp RAV4 Prime plug-in hybrid.

The Dynamic Force inline-four is not the kind of engine you’d normally expect to find in a compact crossover. It achieves 40% thermal efficiency, according to Toyota, a level of efficiency normally found only in racing engines. Like a racing engine, it also loves to rev (power peaks at 6,600 rpm; redline is 6,750 rpm), and output is impressive for a naturally aspirated four-cylinder engine.

It’s too bad the rest of the RAV4 isn’t as, err, dynamic as the engine. On the road, the transmission just couldn’t keep up, hesitating to shift and taking its time when it actually decided to change gears. The steering responded quickly to even small inputs, but the lack of feel made for a videogame-like experience. Toyota did include a “Sport” driving mode, but the only discernible effect was added weight in the steering, which ruined that responsiveness.

So what you’re left with is a buzzy engine straining at its leash in an otherwise ordinary compact crossover. It was unlikely that the RAV4 would dethrone the Mazda CX-5 as the driving enthusiast’s choice, but the difference in character between the powertrain and chassis is still jarring. That’s why it might be worth upgrading to the RAV4 Hybrid or RAV4 Prime, which offer greater levels of refinement, as well as more power and better fuel economy.

On the highway, the RAV4 was more in its element. Cabin noise levels seemed impressively low for a non-luxury vehicle, and the suspension soaked up road imperfections nicely. That’s more relevant to the way most people will use a RAV4, but with the Dynamic Force engine and TNGA platform, Toyota has the makings of something more fun, if only it would take things a little bit further.

Instead of upgrading the RAV4’s on-road driving dynamics, Toyota decided to focus on off-road capability. The RAV4 doesn’t have a two-speed transfer case, locking differentials, or low range like traditional off-roaders, but Adventure and TRD Off-Road models do get a torque-vectoring rear axle and a respectable 8.6 inches of ground clearance. The TRD Off-Road also gets model-specific suspension tuning and Falken Wildpeak A/T Trail all-terrain tires. The RAV4 Adventure and TRD Off-Road also have a 3,500-pound towing capacity, compared to 1,500 pounds for other RAV4 models.

The added ground clearance, all-terrain tires, and AWD drivetrain should allow the TRD Off-Road to handle rougher stuff than the average crossover, but its relative lack of suspension articulation and shallow approach, departure, and breakover angles might be a liability on real off-road trails. 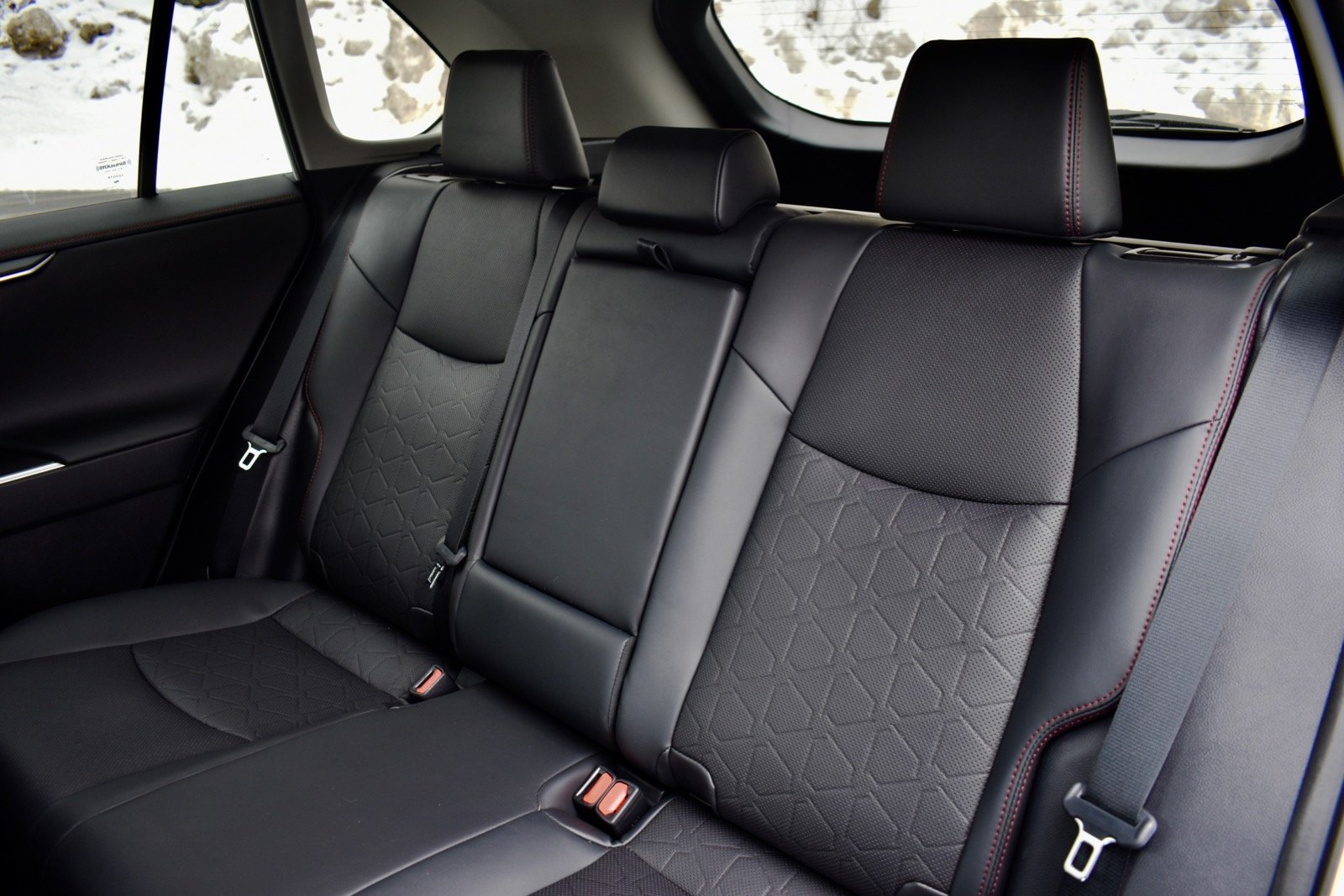 The RAV4’s tall, upright roof provides a competitive amount of headroom in both rows, plus a decent amount of glass for good outward visibility. Legroom in both rows is a bit behind many competitors, however. While we found the front seats in our RAV4 TRD Off-Road tester extremely comfortable, with a form-fitting shape, the rear seats had flat, hard, bottom cushions. A long road trip in those seats seemed like an unattractive prospect.

A 60/40 split-folding bench rear seat is standard, but it doesn’t slide fore and aft like the rear seats of the Ford Escape or Nissan Rogue. At 37.6 cubic feet with the rear seats in place (Toyota doesn’t quote a figure with the seats folded), cargo space is above average, but still behind the segment-leading Honda CR-V. A wide aperture makes loading cargo easier, but the lip of the cargo area is a bit higher than in the Honda.

The oversized knobs and steering-wheel controls were easy to use—even with gloves on. The center-console storage bin was fairly large, as was the space ahead of the shifter designed for holding smartphones (wireless phone charging is available), but they seemed to squeeze out storage space on the console itself. Like the old school SUVs, the RAV4’s styling emulates, you don’t get large cupholders or a place to throw loose change, but you do get a larger shift lever and other vehicle controls (in this case a drive-mode knob and buttons). 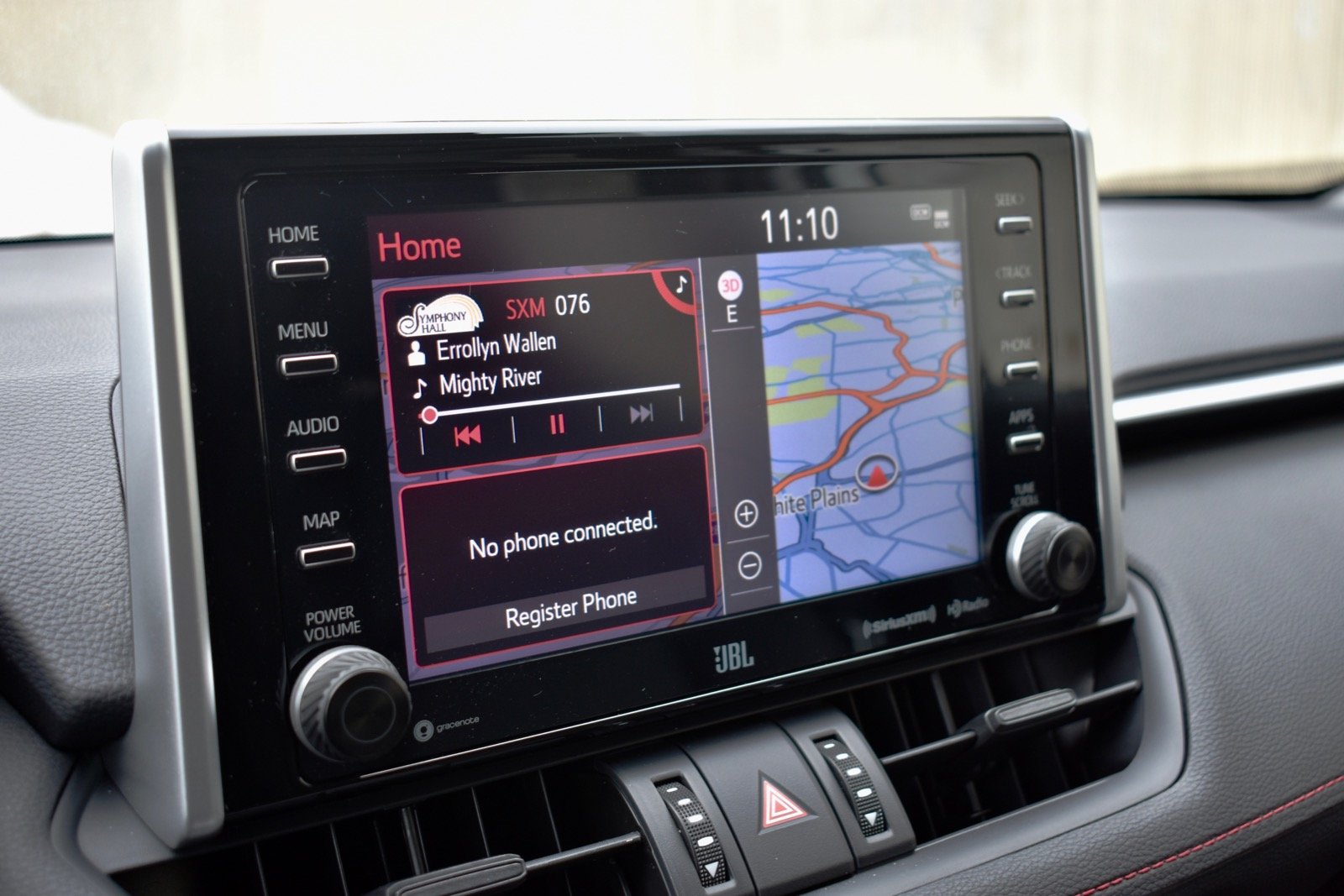 All RAV4 models get standard Apple CarPlay and Android Auto smartphone connectivity, Amazon Alexa compatibility, and SiriusXM satellite radio (with a three-month free trial). Most trim levels get a 7-inch touchscreen as standard equipment, but Limited models get an 8-inch screen, while the Toyota RAV4 Prime plug-in hybrid is available with a 9-inch screen. Up to five USB ports are available, including three for the front row and two for the back row. A JBL premium audio system is also available.

As with other Toyota models, the infotainment system is easy to use, but not a standout feature. The touchscreen was well positioned on a perch atop the dashboard, with graphics that were easy to read while driving and shortcut buttons for important functions like navigation, Bluetooth, and audio. However, the system isn’t very flashy, and the gasoline RAV4 doesn’t get the head-up display (HUD) available on the RAV4 Prime model.

Toyota doesn’t offer much to excite tech-savvy shoppers, but for everyone else, the RAV4 offers a simple interface that makes in-car infotainment less of a chore. 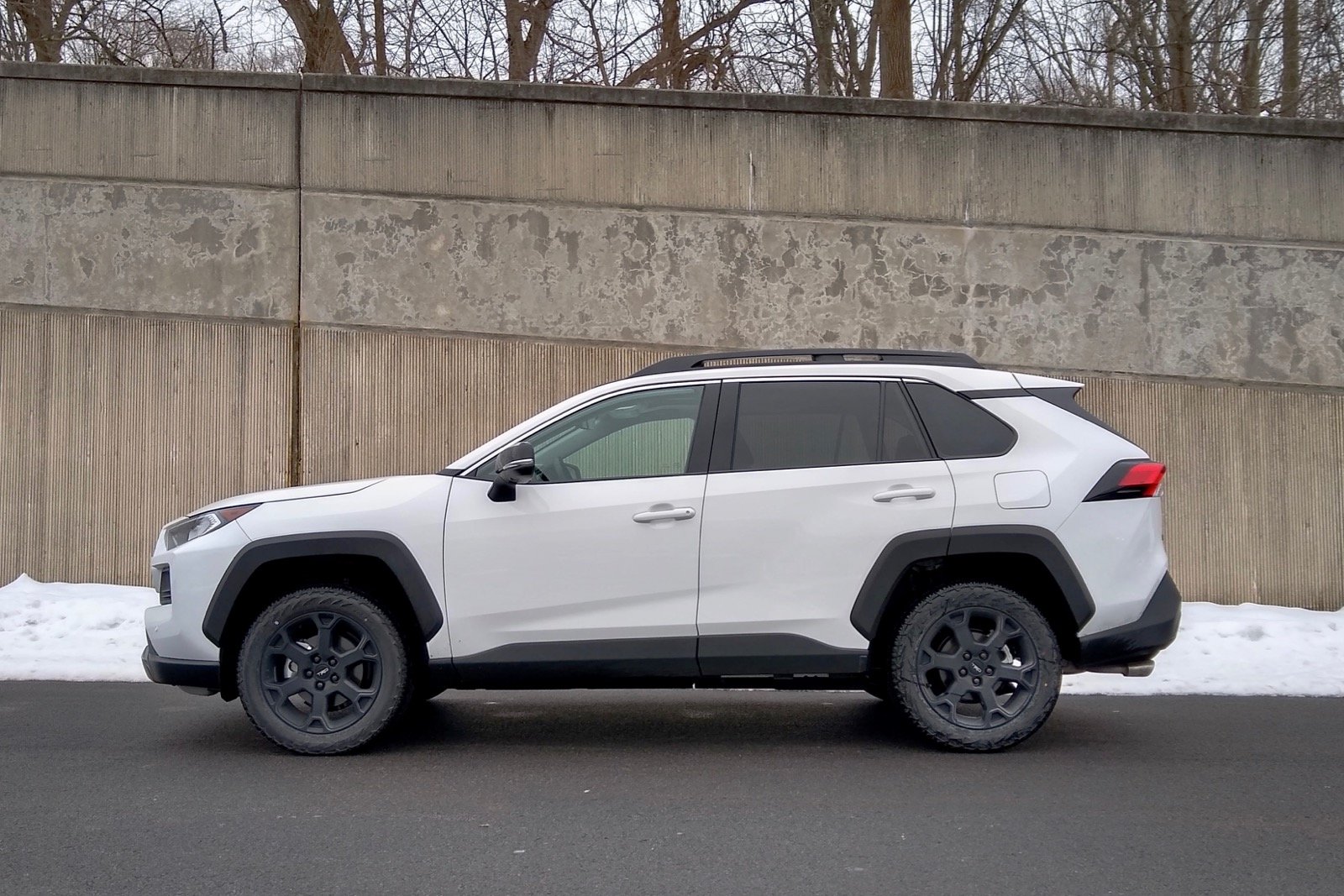 The Insurance Institute for Highway Safety (IIHS) gave the 2021 Toyota RAV4 a “Top Safety Pick” rating, with top “Good” scores in all crash tests, and the top “Superior” rating for front-crash prevention tech. The RAV4 missed out on the highest “Top Safety Pick+” rating because of mixed headlight scores, with headlights on certain trim levels getting “Marginal” or “Poor” ratings.

The National Highway Traffic Safety Administration (NHTSA) gave the 2021 RAV4 a five-star overall rating, with four stars in frontal and rollover crash tests, and five stars in side crash tests. 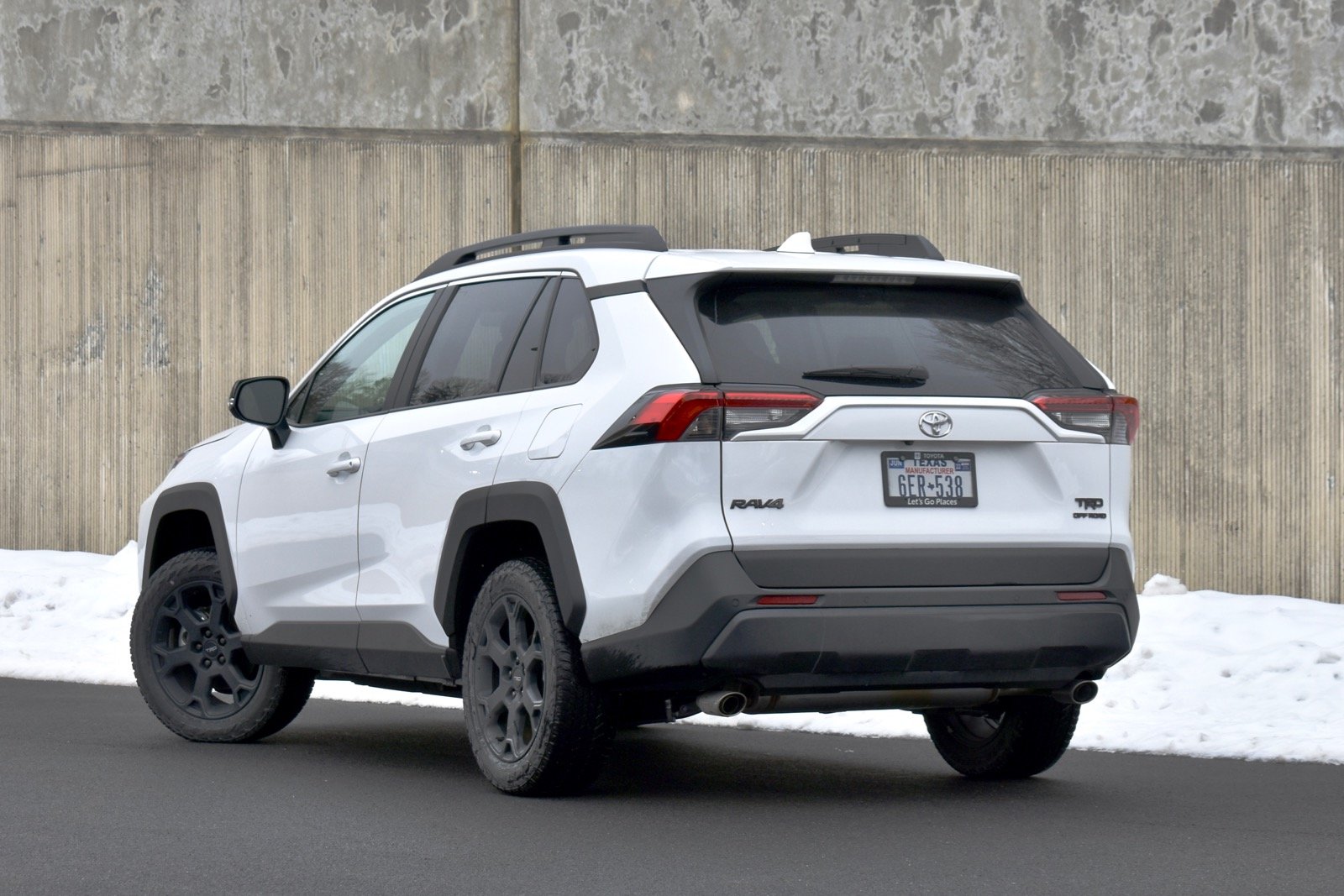 Toyota offers a three-year, 36,000-mile, basic warranty and a five-year, 60,000-mile, powertrain warranty. The warranty terms are pretty standard for this market segment, although Hyundai and Kia offer longer terms. New-car buyers also get ToyotaCare, which includes two years or 25,000 miles of free factory-scheduled maintenance (at the dealership) and two years of 24-hour roadside assistance with unlimited mileage.

In the overcrowded compact-crossover segment, the RAV4 isn’t the best at anything. It’s not the most spacious, or the most fun to drive, and doesn’t have any standout tech features. However, it’s a solid performer in all of the important categories, with a distinctive design and Toyota’s legendary reputation for reliability. That should earn it a place on your shopping list.

Enter your zip to see incentives for a new RAV4 in your area.

Back Tires Spin Without Moving When Release Brake

When I stop at the intersection, and the light turns to green, I release the brake, then the rear tires spin for 1 or 2 seconds, but the car is not moving. I have to press gas. The road is complet...

What Is The Gas Tank Capacity On The 2021 RAV4 With A Regular Gas Engine?

Can anyone tell me what the gas tank capacity is for ther 2021 RAV4 XLE (non-hybrid. Owners manual sayus 14.5, but the sales guy thought it was larger.