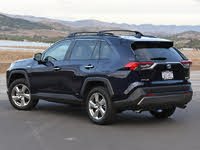 Looking for a New Toyota RAV4 Hybrid in your area?

Unless you want the rugged Adventure or TRD Off-Road versions of this compact crossover SUV, the one you should buy is the more powerful and efficient 2021 Toyota RAV4 Hybrid. 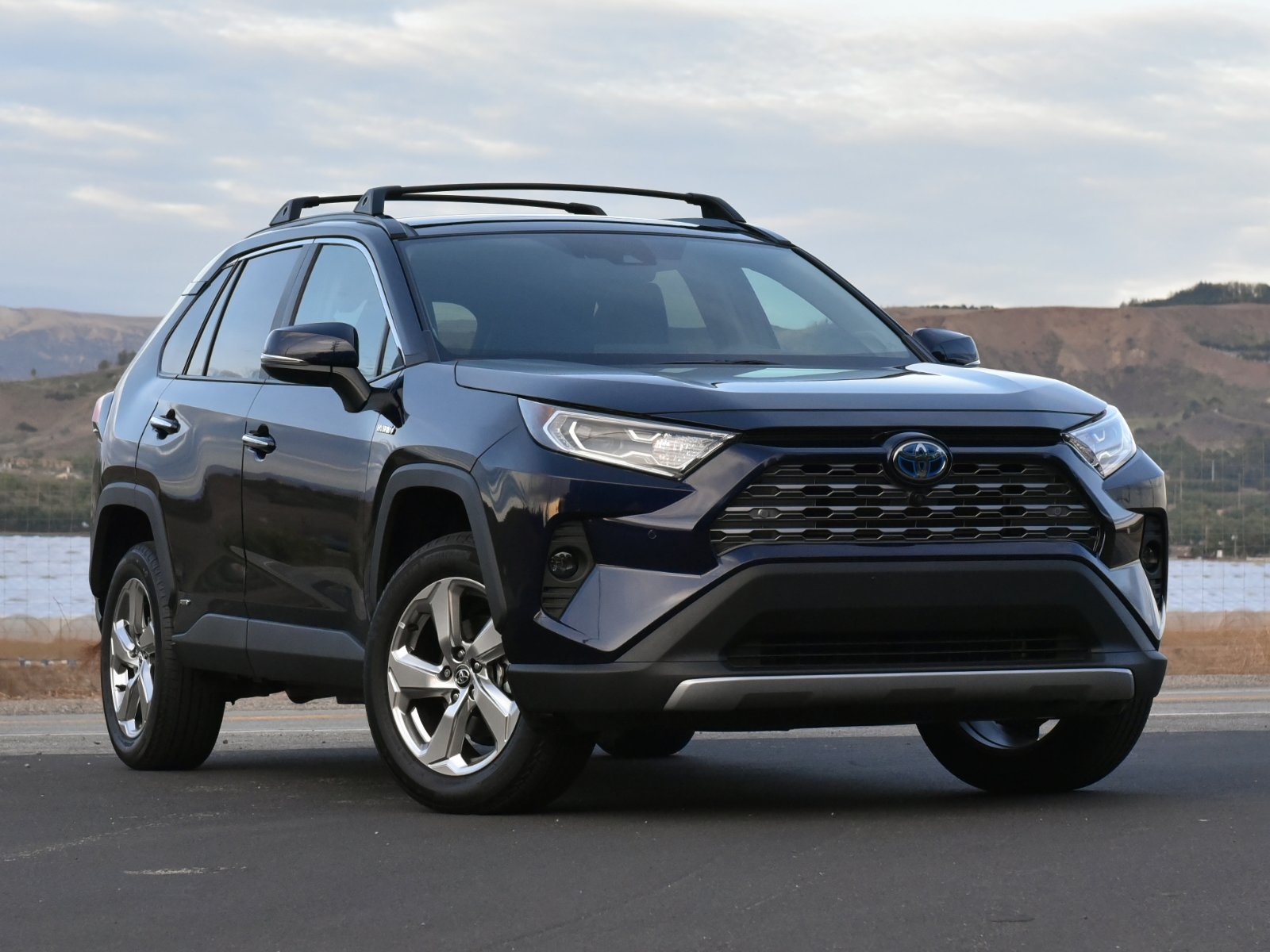 A 2021 Toyota RAV4 Hybrid pays for itself in a little more than three years. We’ll show you the math later in this review, but based on national averages, it goes from being more expensive to buy to saving you money after about 40 months of ownership. 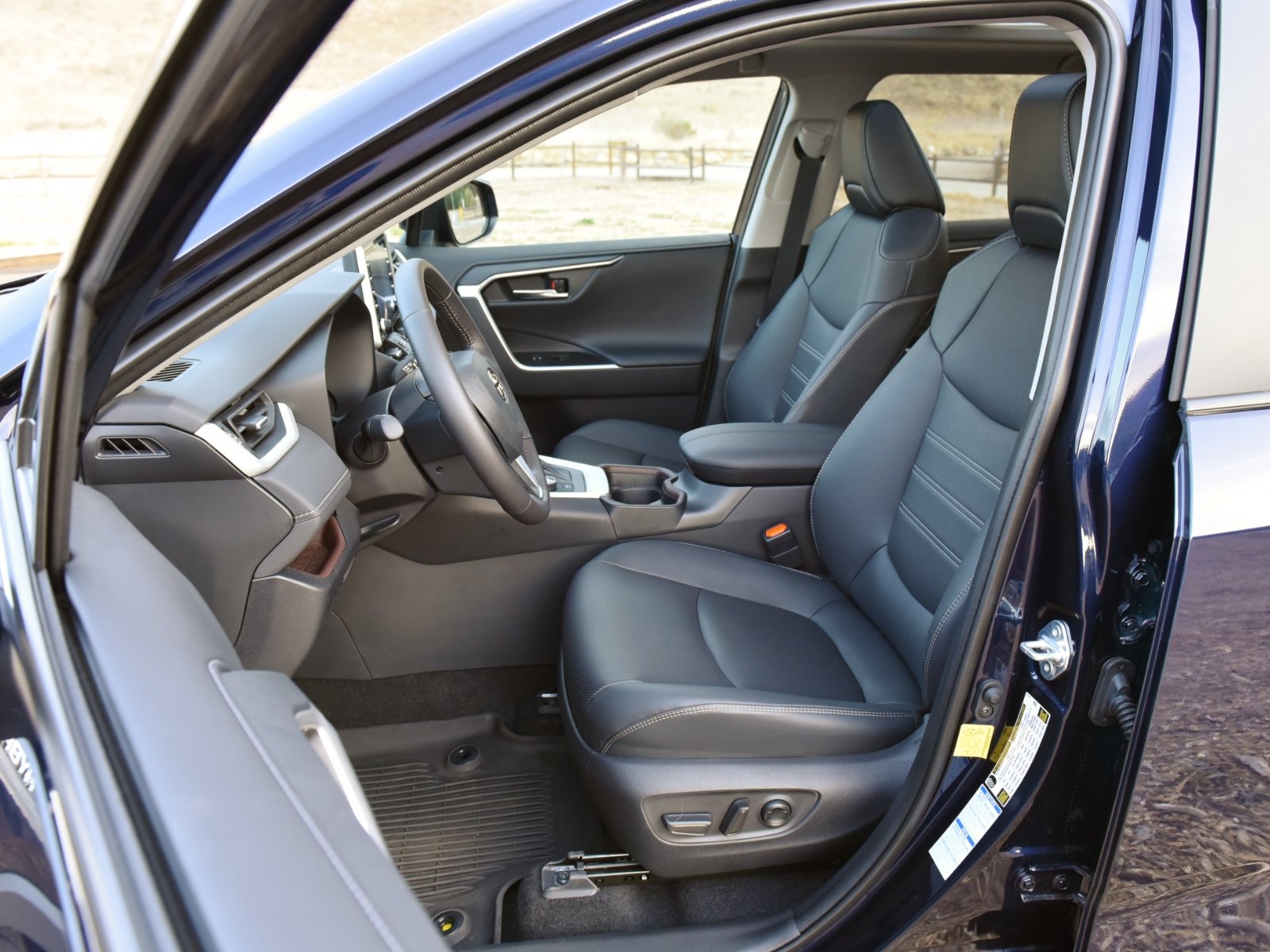 For this review, we examined a 2021 Toyota RAV4 Hybrid Limited. It had almost every option, which is how the MSRP wound up at $42,083, including the destination charge. That’s excessive for a RAV4, and only the new Prime plug-in hybrid version can get away with a window sticker starting with a "four."

Looking at it, you’d never guess our test vehicle is a fully-loaded RAV4 instead of the one you’d climb into at the airport rental car lot. At a minimum, this trim level deserves the same larger wheels found on a non-hybrid RAV4 Limited. Better yet, it would be great if Toyota made the RAV4 Hybrid in an Adventure trim level, like the non-hybrid version. But its electronic all-wheel-drive (AWD) system isn’t up to that task.

In any case, for a cute-ute, the RAV4 looks kind of tough. All it needs is a bolder set of wheels in place of the bland and undersized 18s. If you want something softer or more upscale, the new 2021 Toyota Venza is basically a RAV4 Hybrid that’s gone to finishing school.

Inside, the RAV4 Hybrid is stylish, functional, and practical. Quality is hit-and-miss, a blend of impressive materials with the glossy hard plastic you expect to find in a compact crossover SUV. Our test vehicle had a rattle coming from behind the front seats, which turned out to be the license plate vibrating on the tailgate. 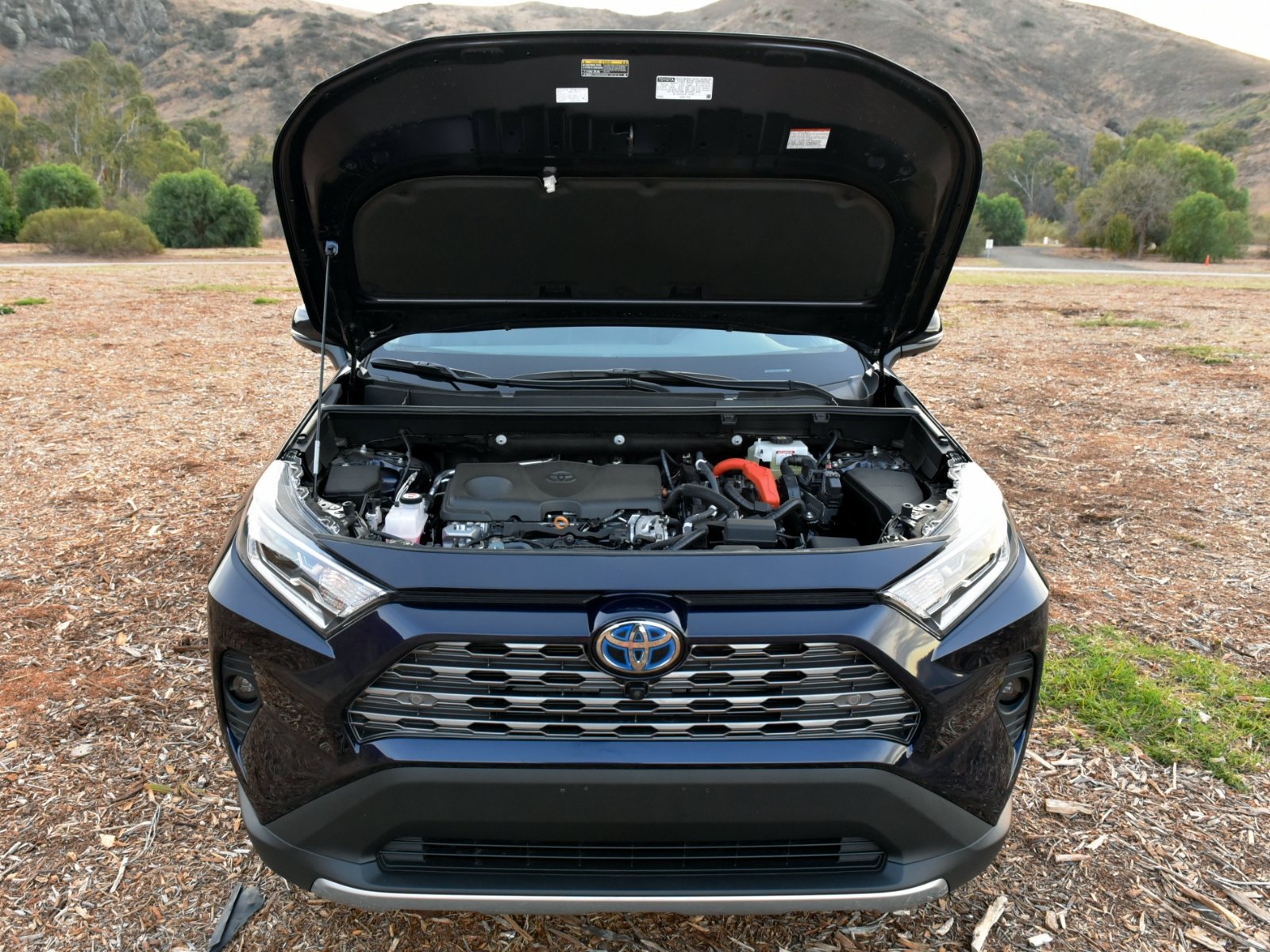 To create the hybrid powertrain in the RAV4, Toyota pairs a 2.5-liter four-cylinder gas engine with front and rear electric motors and a lithium-ion battery pack housed underneath the back seat. The rear electric motor effectively gives the RAV4 Hybrid standard AWD.

Together, the components generate 219 horsepower, 16 hp more than the RAV4’s standard engine but 83 hp less than the plug-in RAV4 Prime. The front electric motor makes 149 pound-feet of torque, and the rear electric motor generates 89 lb-ft. Several driving modes are available, including Eco, Normal, Sport, Trail, and EV. When the RAV4 operates in EV mode, it emits a whirring noise to let pedestrians know an electric vehicle is operating nearby.

Depending on the trim level, the RAV4 Hybrid weighs between 3,690 pounds and 3,780 pounds, which is as much as 200 pounds more than a standard RAV4. However, the instant electric-motor torque makes the RAV4 Hybrid feel lively when accelerating, and there is plenty of power available. Unfortunately, the four-cylinder engine sounds unpleasant when it revs. The EPA says the RAV4 Hybrid will get 40 mpg in combined driving, and we averaged 39.7 mpg on our testing loop.

Under almost all driving circumstances, the RAV4 Hybrid’s continuously variable automatic transmission (CVT) operates transparently. After a week of driving, it failed to establish a reputation for droning. The regenerative braking system proved equally amenable, exhibiting none of the pedal modulation flaws common to the technology. The nicely weighted steering is a willing partner, and the wheel rim is great to grip.

Toyota uses a MacPherson strut front, multi-link rear suspension design, and a brake-based Active Cornering Assist system to maximize the RAV4 Hybrid’s ride and handling qualities. However, the test vehicle’s P225/60R18 Michelin Primacy all-season tires do the SUV no favors, thanks to unexpectedly low levels of grip. Take a corner with too much speed, and they start to scrub, squeal, and make a big fuss.

Otherwise, the RAV4 Hybrid is agreeable to drive on roads that bend and kink. The SUV has a relatively flat cornering stance, and overall driving dynamics are favorable. You just can’t have much in the way of fun unless your idea of a good time is hypermiling.

As a daily driver, the RAV4 Hybrid impresses. The SUV soaks up bumps and potholes, and it effectively quells unwanted body motions. If you choose the XSE trim level, you get a sport-tuned suspension for a firmer feel, but this version of the RAV4 Hybrid sits on the same vociferously-protesting tires.

During a short off-road jaunt, the RAV4 Hybrid and its 8.1 inches of ground clearance and Trail driving mode allowed it to easily travel where a car cannot. However, you must take deeply rutted terrain at very slow speeds. 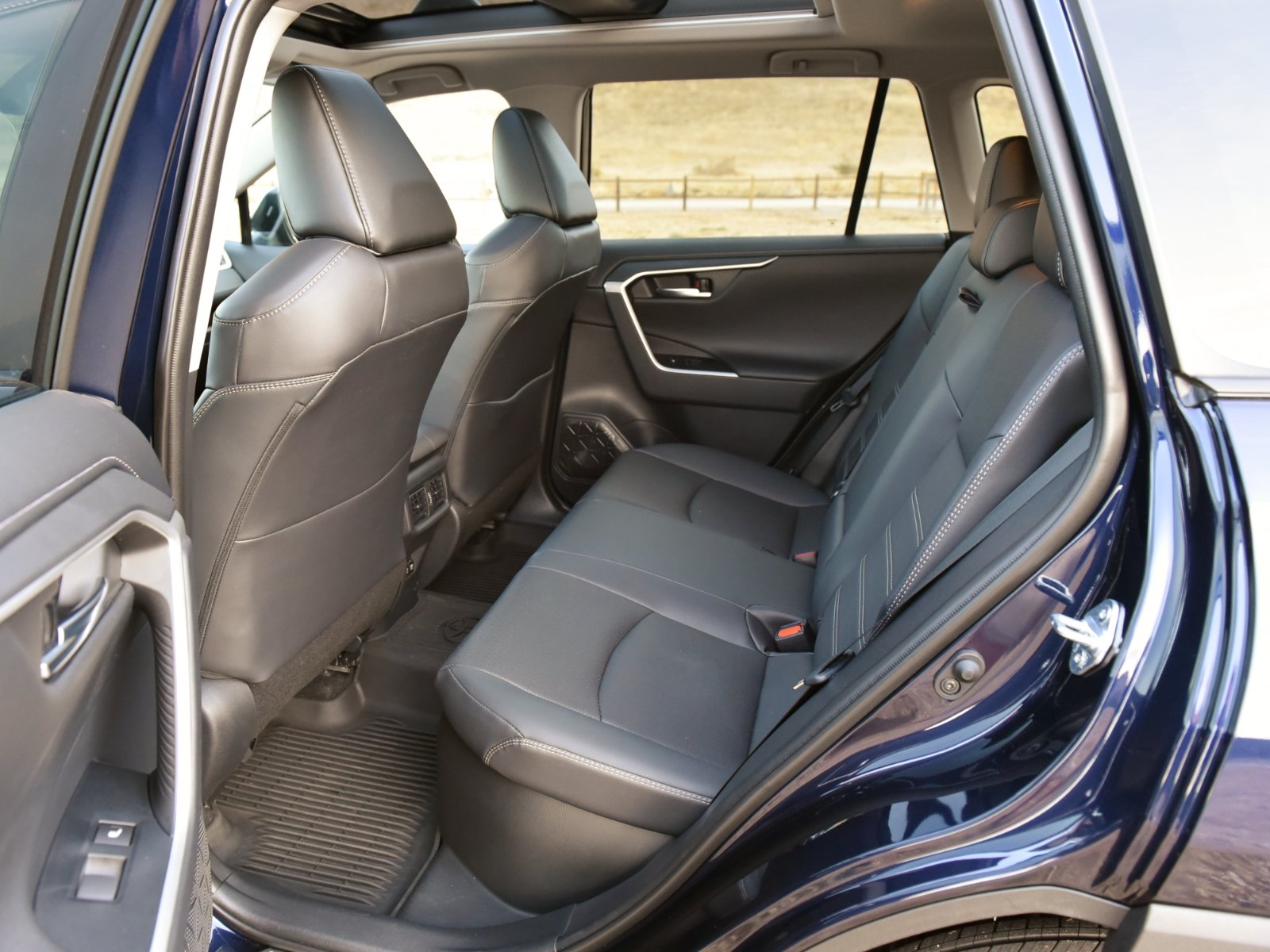 Comfort is easy to find in the RAV4 Hybrid. Our test vehicle had an eight-way power-adjustable driver’s seat, a tilt/telescopic steering wheel with a heated rim, and heated and ventilated front cushions. The passenger’s seat does not adjust for height, but it doesn’t need to.

Drivers face clear, legible instrumentation that’s a bit overdone in terms of colors and graphics, which change depending on the selected driving mode. Toyota arranges the dashboard so that all controls are located where you expect to find them. The climate control knobs are almost obscenely sized and shaped, and the stereo knobs are useful, too. All four of them have rubber surfaces for improved grip. And the infotainment system is easy to reference, understand, and use.

Storage is accommodating, and Toyota carves useful shelves into the dashboard in front of the passenger and to the left of the steering column. Rear-seat occupants get a center armrest with cupholders, bottle holders in the door panels, and front seatback pockets.

Open the rear liftgate, and you’ll find a roomy 37.5 cubic-foot cargo area. A netted cubby is located to the right, but without a recessed design, tall items will quickly free themselves from this location. The test vehicle’s premium sound system’s subwoofer took up space to the left, and the optional all-weather mat was both clunky and didn’t play nice with the sub.

Fold the rear seats down, and the RAV4 Hybrid’s maximum cargo space amounts to 69.8 cubic feet. 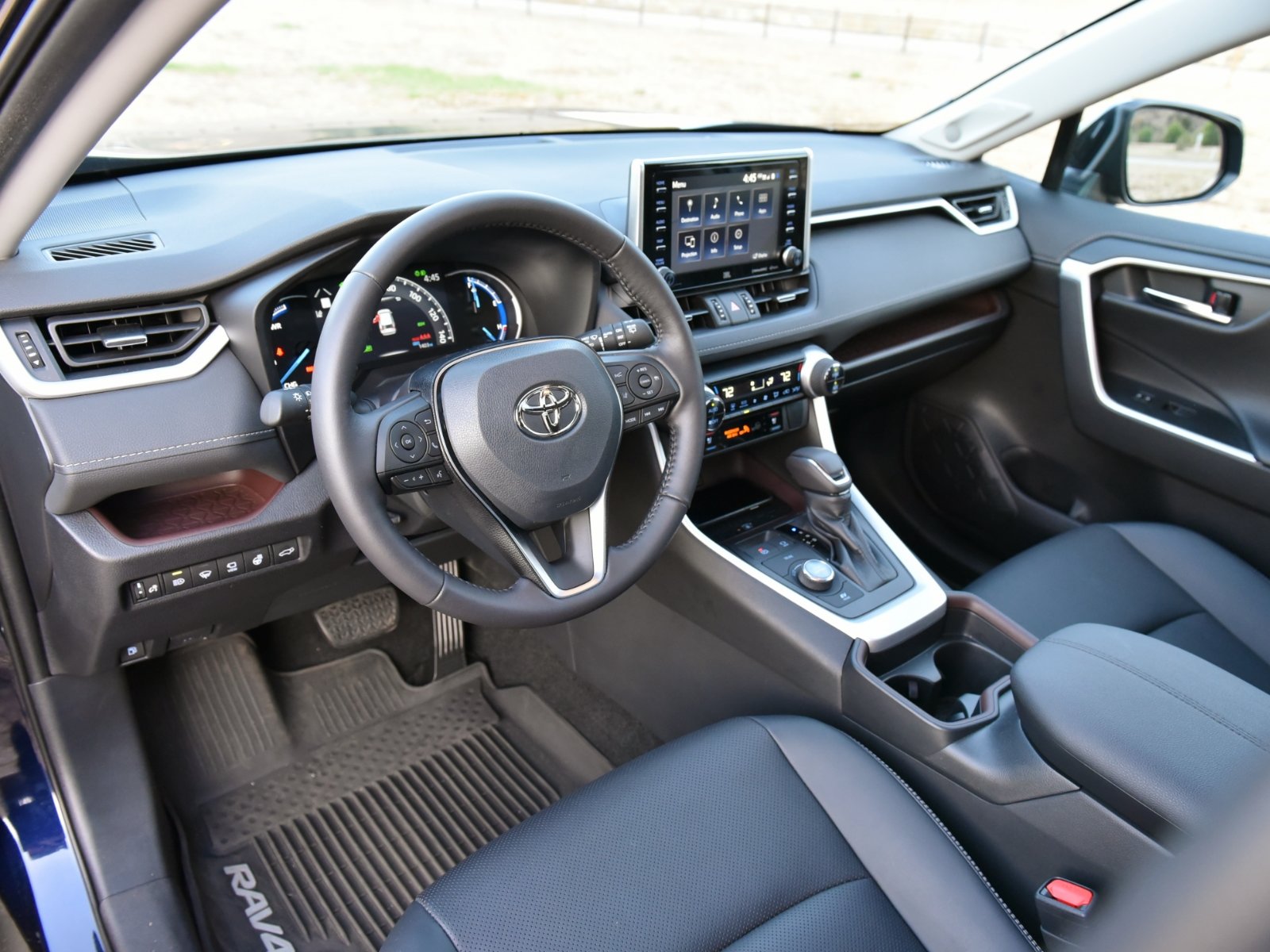 Toyota offers several infotainment systems for the RAV4 Hybrid, equipped with either a 7-inch or an 8-inch touchscreen display. They all supply Apple CarPlay, Android Auto, Amazon Alexa compatibility, and SiriusXM satellite radio with a free three-month trial period. Two connected service plans are also standard: Safety Connect with a one-year free trial plan and WiFi Connect with a free 2GB of data usage during the first three months of ownership.

Mounted like a tablet computer at the top of the dashboard, the 8-inch display is flanked by shortcut buttons for primary functions and anchored by stereo volume and tuning knobs. Select the home screen, and it simultaneously shows the radio, connected phone, and navigation map details. The dynamic voice recognition technology is impressive, providing a fast and accurate response to most queries. However, it flubbed one of my standard test prompts and cannot adjust the climate settings. I found the JBL sound system satisfactory.

Toyota also offers some impressive camera-based technology for the RAV4 Hybrid. Upgrades include a 360-degree surround-view camera system and a rearview camera mirror. 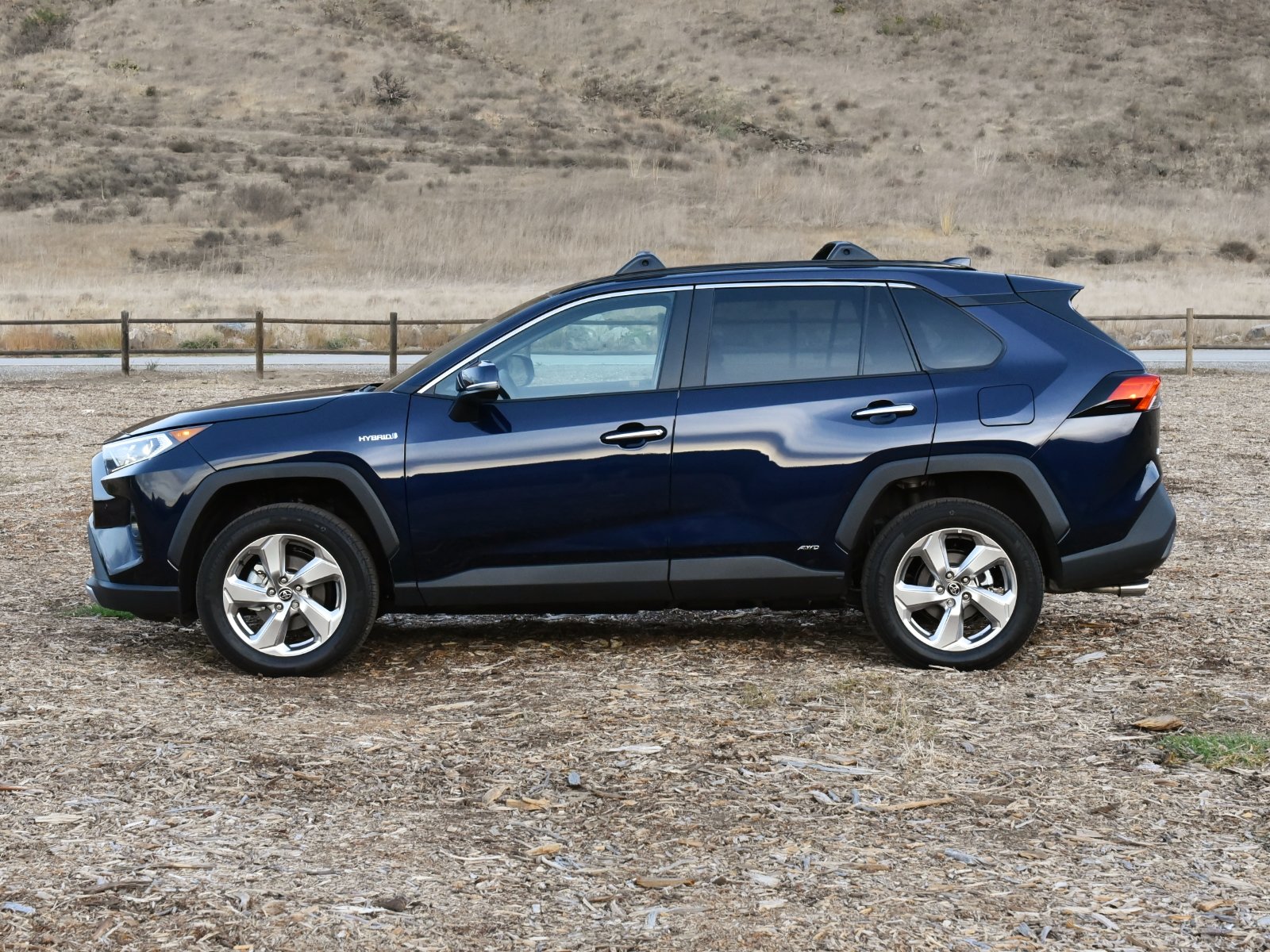 Generally speaking, TSS 2.0 is effective. In this particular instance, I found the lane-centering assistance to be ornery, eager to resist my steering inputs. I also found that even with the shortest gap maintenance setting, the adaptive cruise control allowed too much space to accumulate between the RAV4 Hybrid and traffic ahead, which served to irritate drivers in traffic behind. Furthermore, in tighter, bunched-up traffic while driving at freeway speeds, these functions behaved in a frequently erratic and uncertain fashion. It was smoother in lighter traffic situations, as though it could “see” the road ahead better.

In crash tests performed by the National Highway Traffic Safety Administration (NHTSA), the RAV4 Hybrid earns an overall rating of five stars. The Insurance Institute for Highway Safety (IIHS) gives the SUV top marks in all assessments except for its headlights. Only the adaptive front headlights on the RAV4 Hybrid Limited get a top "Good" review from the IIHS. 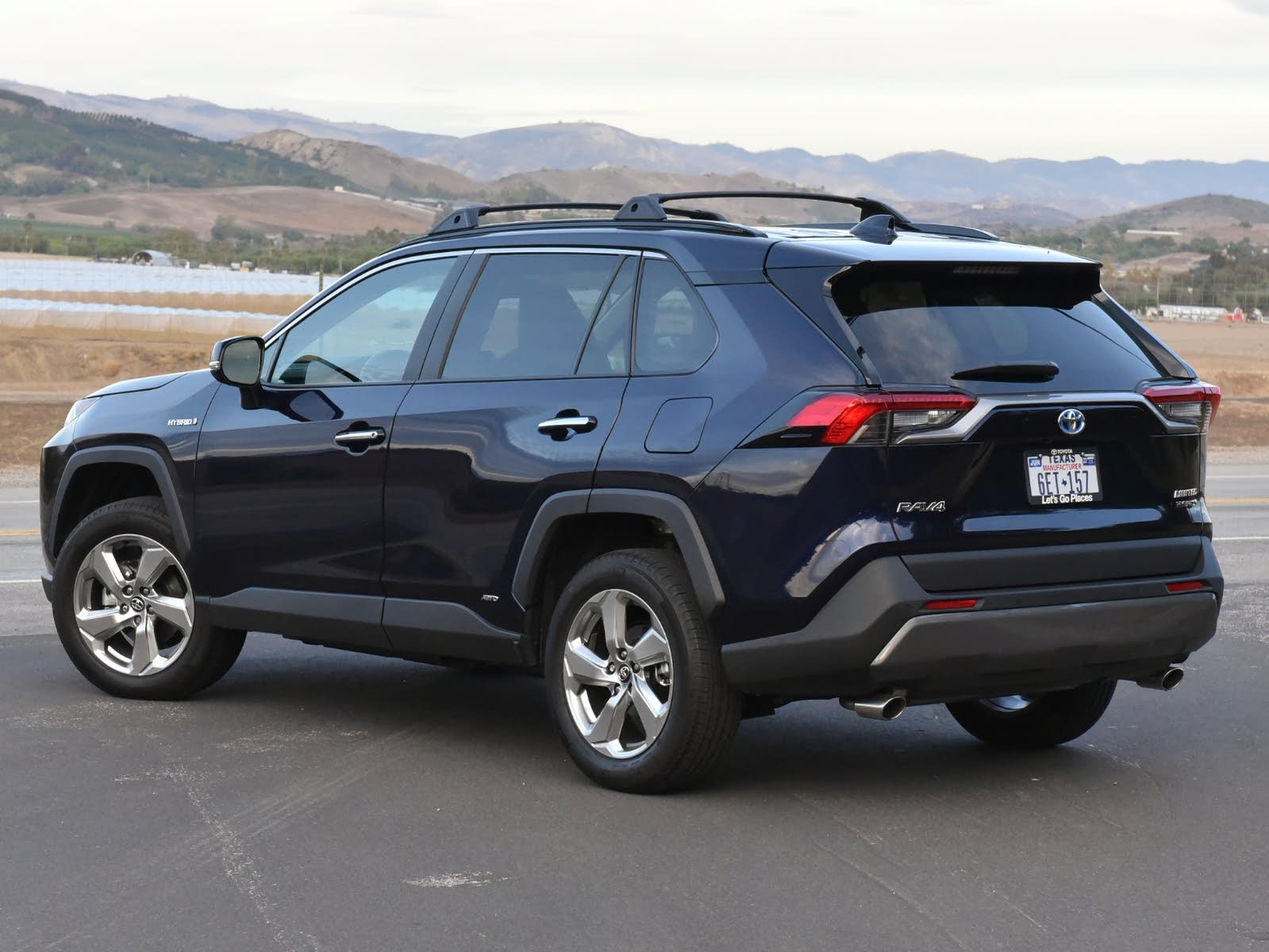 Toyota charges $1,100 extra for the 2021 RAV4 Hybrid compared to a standard version with AWD. In exchange for this premium, you can travel 10 to 12 more miles on every gallon of gas.

If you drive 15,000 miles annually, based on their official EPA fuel-economy ratings, you’ll pump 517 gallons of gas into a standard RAV4 and 375 gallons into the RAV4 Hybrid. At a national average price of $2.40 per gallon, the RAV4 Hybrid saves you about $340 annually. That means RAV4 Hybrid ownership starts putting cash back into your wallet at the 39-month mark.

Now consider the RAV4’s reputation for bulletproof reliability, its safety record, and its undeniable utility, and you’ve got an affordable crossover SUV that you can buy, drive for what seems like forever, and save a pile of money in the long run.

Have you driven a 2021 Toyota RAV4 Hybrid?
Rank This Car

Enter your zip to see incentives for a new RAV4 Hybrid in your area.

Does CarGurus provide "canned" messaging for prospective buyers who want to inquire about a listed cars, and desire to meet for a test drive? I have received two *identical" messages from two prosp...

What Happens If My Battery Gets Low While Driving On The Road In My 2021 RA...