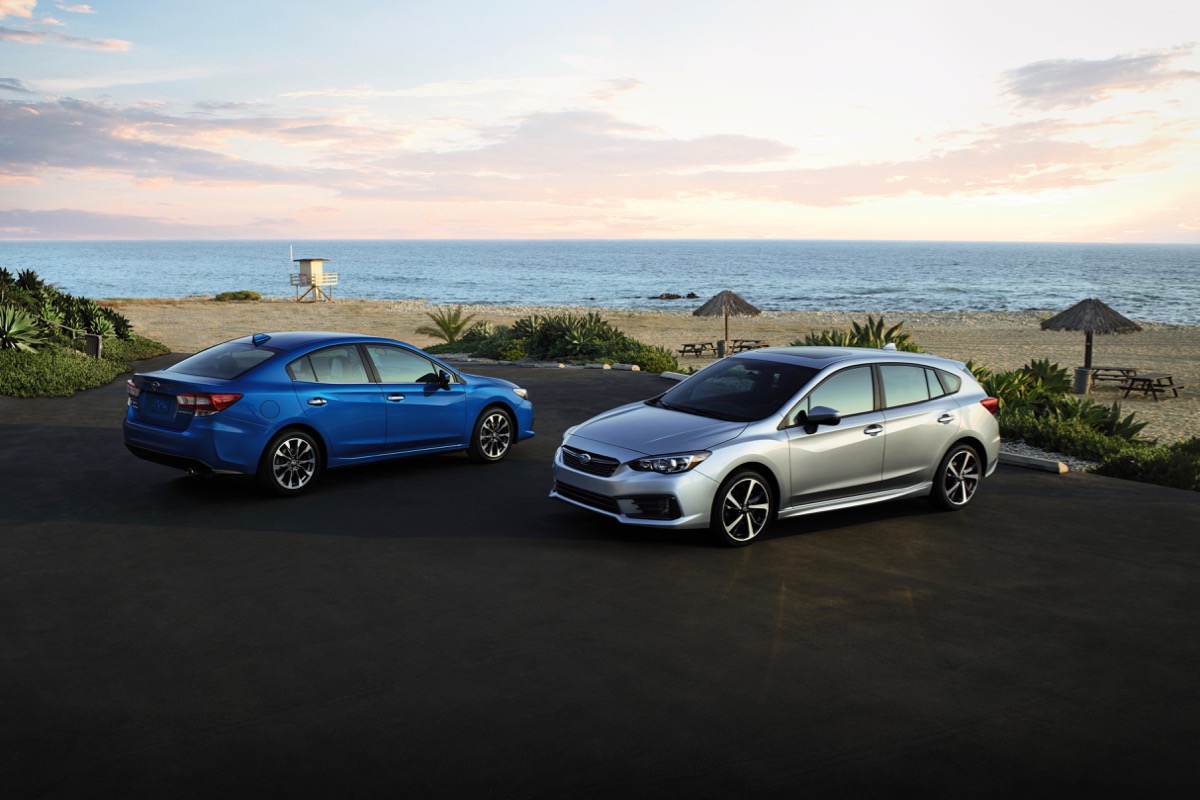 Looking for a New Subaru Impreza in your area? 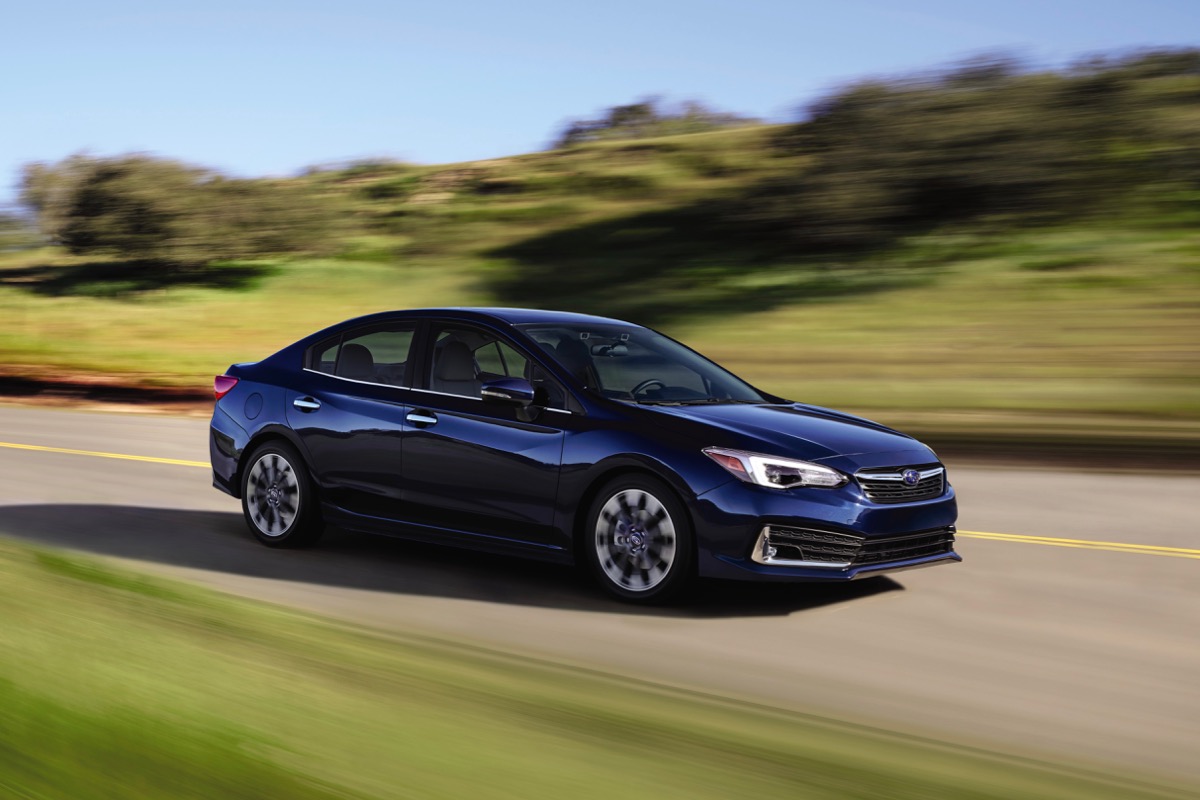 Subaru developed a cult following thanks to cars like the Impreza. Thanks to standard all-wheel drive (AWD), the Impreza has been a hit in wintry climates, offering the low operating costs of a compact car without the limited foul-weather capability of the mostly front-wheel drive (FWD) competition.

The current Impreza represents the model’s fifth generation, and dates back to the 2017 model year. Available in sedan and hatchback form, the Impreza has also spawned the sporty Subaru WRX and more rugged looking Subaru Crosstrek, which have overshadowed the basic Impreza to some extent. We’ll cover the WRX and Crosstrek in separate reviews.

Changes for the 2021 model year are limited to availability of SI-Drive drive modes on the Impreza Premium trim level (this feature was previously available only on the Impreza Sport) and a $100 price increase. The full Impreza lineup remains unchanged, encompassing base, Premium, Sport, and Limited trim levels for both the sedan and hatchback. Consequently, we’ll look back on our experience with previous model years for this overview. 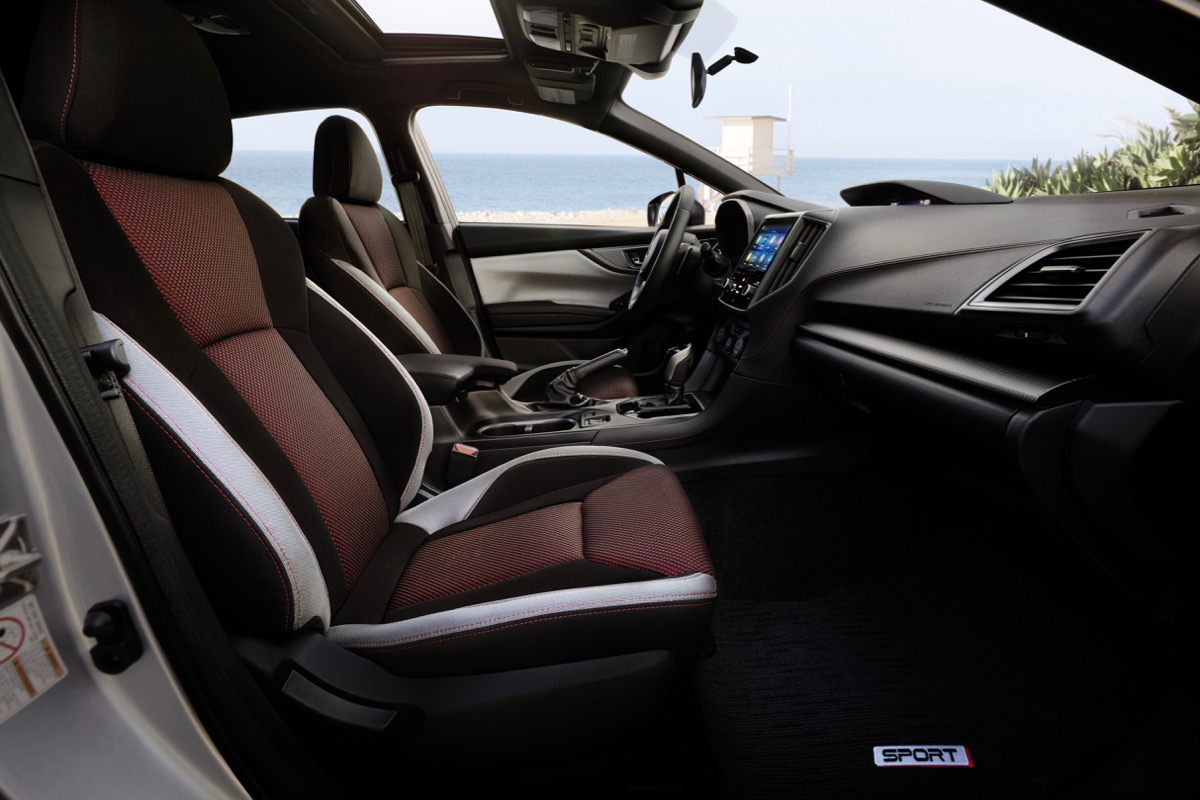 Subaru has taken some styling risks with the Impreza in the past, giving it large round headlights and box fender flares, but the current generation is much more conservative. While there is little to identify the 2021 Impreza as a Subaru, it’s still a fairly handsome design, in our opinion.

Both the sedan and hatchback get sleek headlights and taillights that give an added impression of width, as well as a nicely-tapered front end. Some scalloping adds a little visual flair to the body sides, and the awkward wheel arch sheetmetal from the previous generation was thankfully toned down. Impreza Sport models also get some specific styling touches, including 18-inch alloy wheels (base models get 16-inch steel wheels).

The Impreza is based on the same Subaru Global Platform as most of the automaker’s other models, including the larger Legacy sedan, the Outback wagon, and the Forester and Ascent crossovers. Subaru did a good job engineering this platform, as it’s paid dividends in overall refinement in every vehicle we’ve driven.

The interior doesn’t have the most exciting design, but that’s typical of compact cars. The housing for the Impreza’s infotainment touchscreen splits the dashboard in two, while the rest of the interior is mostly different forms of plastic. As with the exterior, the Impreza Sport gets some model-specific touches, including contrast stitching, a leather-wrapped steering wheel, and aluminum pedals, while the range-topping Impreza Limited gets standard leather upholstery and LED headlights. 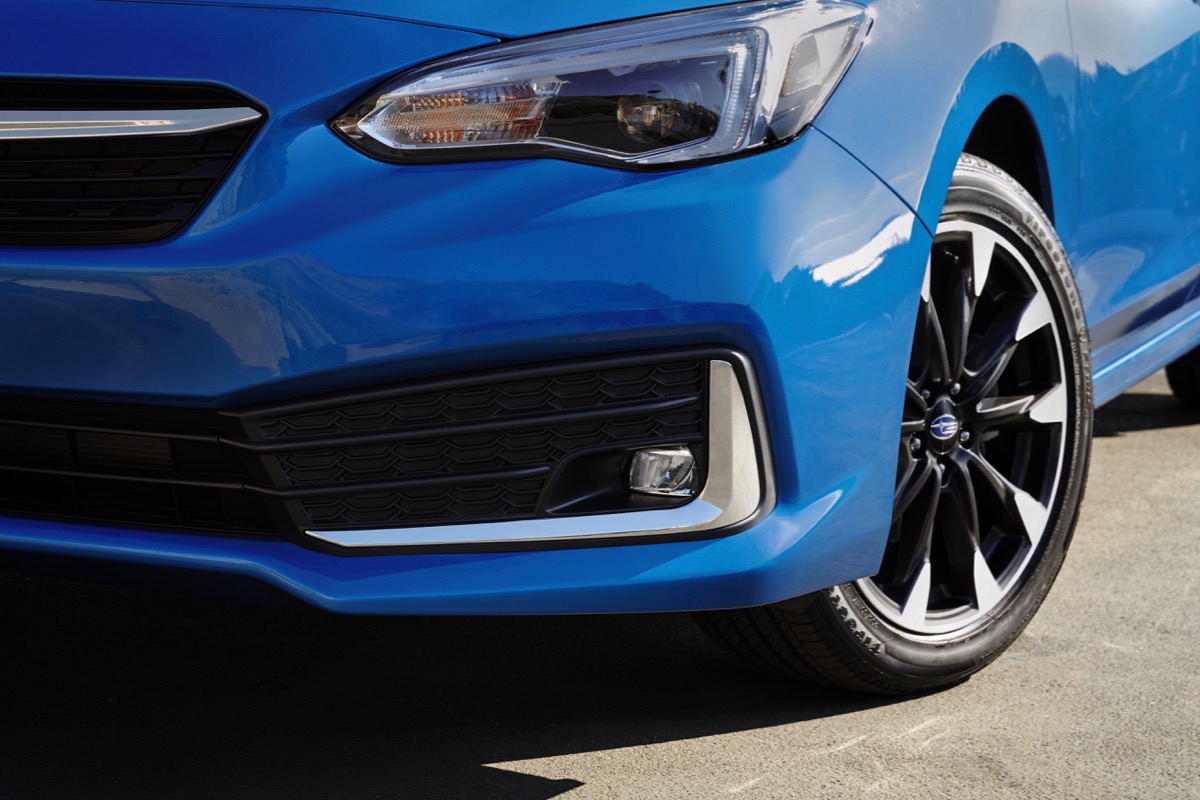 Every 2021 Subaru Impreza gets a 2.0-liter four-cylinder engine developing 152 horsepower and 145 pound-feet of torque. It’s a Subaru-signature boxer engine, so called because the pistons oppose each other like fighters in the ring. That allows the boxer to be mounted lower in the chassis than a conventional inline-four engine, helping to lower the car’s center of gravity.

We’ve found the Impreza to be an agreeable daily driver, lacking the engagement of a Honda Civic or Mazda 3, but still providing a nice ride. This is no tinny econobox; it feels solid and refined.

On previous drives, we’ve found that the Impreza Sport’s special suspension tuning to be a good balance between ride quality and handling, while torque vectoring gives the car a neutral balance. However, noncommunicative steering and the engine’s relative lack of power keep the the Impreza Sport from being a true driver’s car. For that, you’ll need a WRX. 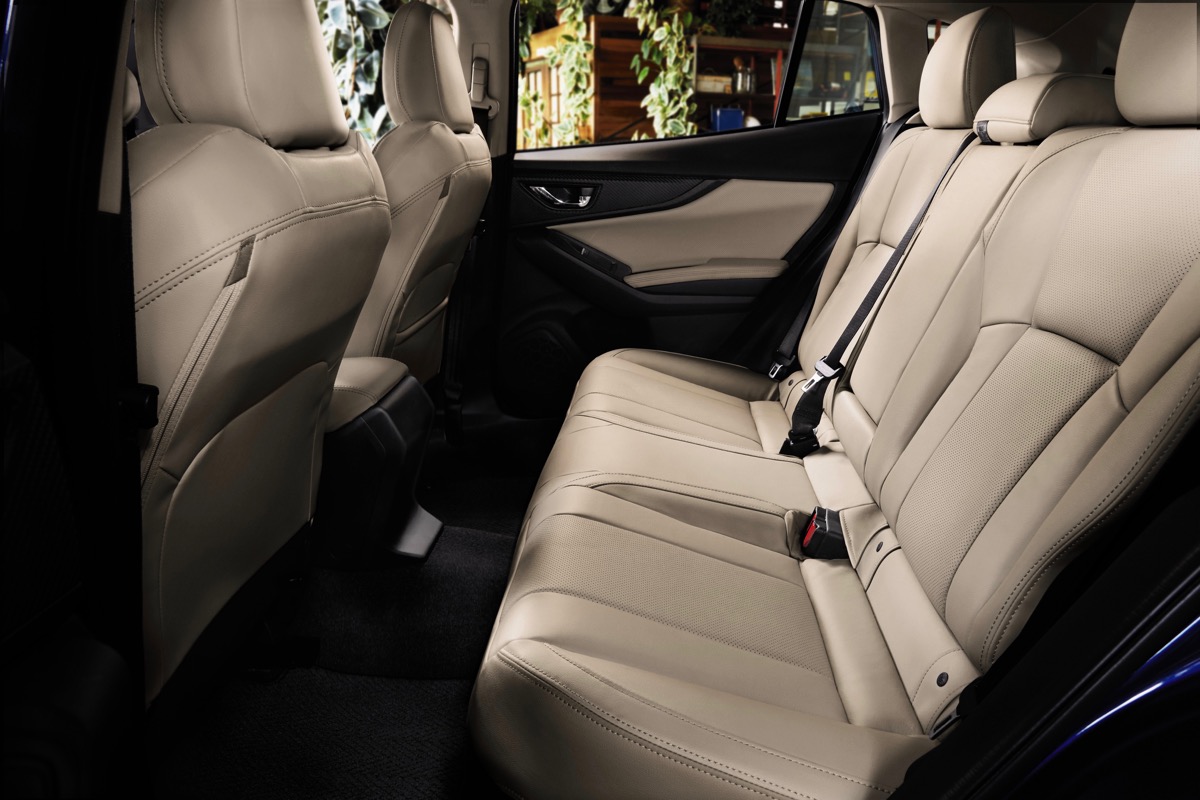 Both the Impreza hatchback and sedan offer reasonable legroom for their respective competitive sets, although headroom in both rows is a bit below average. At 12.3 cubic feet, the Impreza sedan has the least trunk space among current compact sedans, but Subaru does at least offer a standard 60/40 split-folding rear seat to accommodate longer items.

The Impreza hatch has 20.8 cubic feet of cargo space with the rear seats in place, which is more than you get in a Mazda 3 or Toyota Corolla hatchback, but less than the 2021 Honda Civic hatchback. The Impreza offers more cargo space than the Civic with the rear seats folded, however, at 55.3 cubic feet. All hatch trim levels except the base model also get standard roof rails.

In what has become something of a Subaru tradition, Impreza Premium and higher trim levels get an All-Weather Package, including heated front seats, a heated windshield, and heated exterior mirrors. The Sport trim level adds keyless entry with pushbutton start, while the Limited adds a standard six-way power driver’s seat (optional on lower trim levels) and automatic climate control. A power moonroof is also available as an extra-cost option on most trim levels. 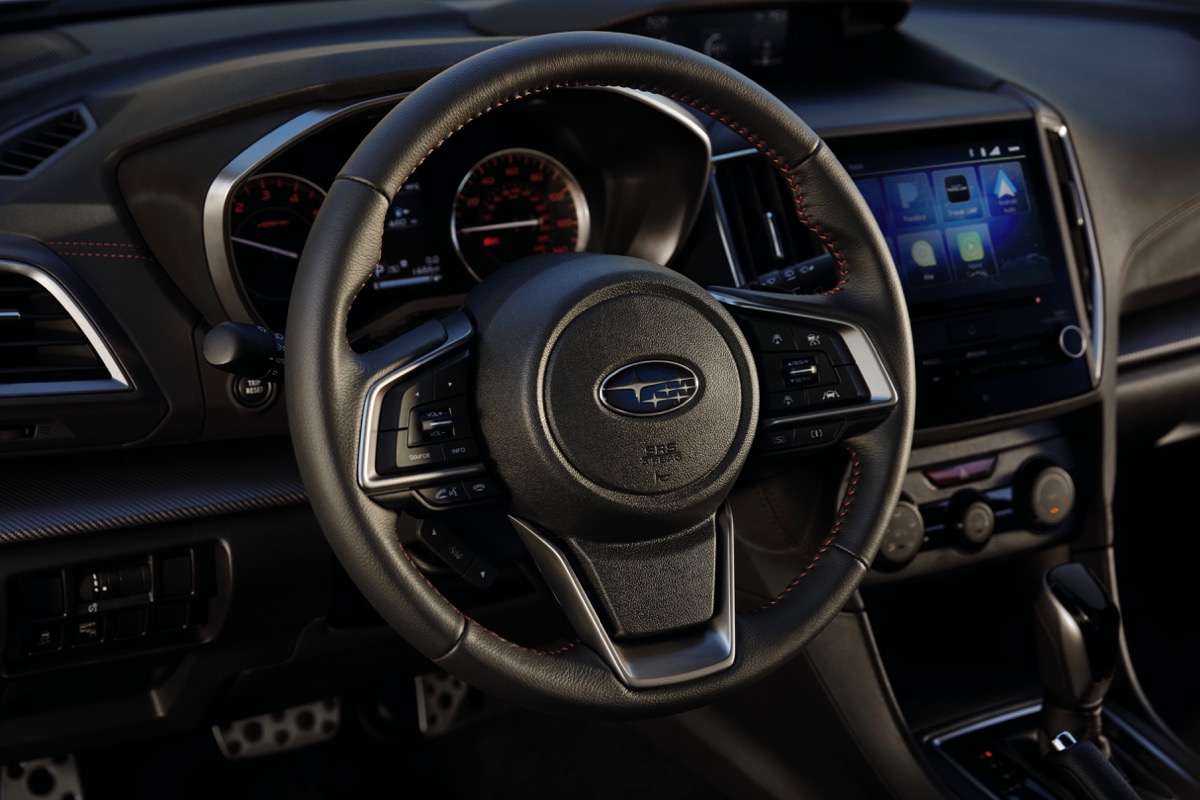 The base and Premium trim levels a 6.5-inch touchscreen with Apple CarPlay/Android Auto connectivity and Bluetooth, while higher trim levels get an 8-inch touchscreen. An option package for the top Limited trim level adds TomTom-based navigation and a Harman Kardon audio system.

One unusual feature is the secondary display housed in a hood over the main touchscreen. It can show information like estimated range fairly close to the driver’s line of sight but, considering that Subaru also includes a small LCD display in the gauge cluster, it seems a bit redundant.

Overall, though, we’ve found the Impreza’s infotainment system to be fairly easy to use. The large touchscreen icons are easy to spot at a glance, and Subaru doesn’t make drivers dig into menus for important functions. This fairly basic system doesn’t offer much for tech-savvy car shoppers, but that’s also the case with most other vehicles in this price range. 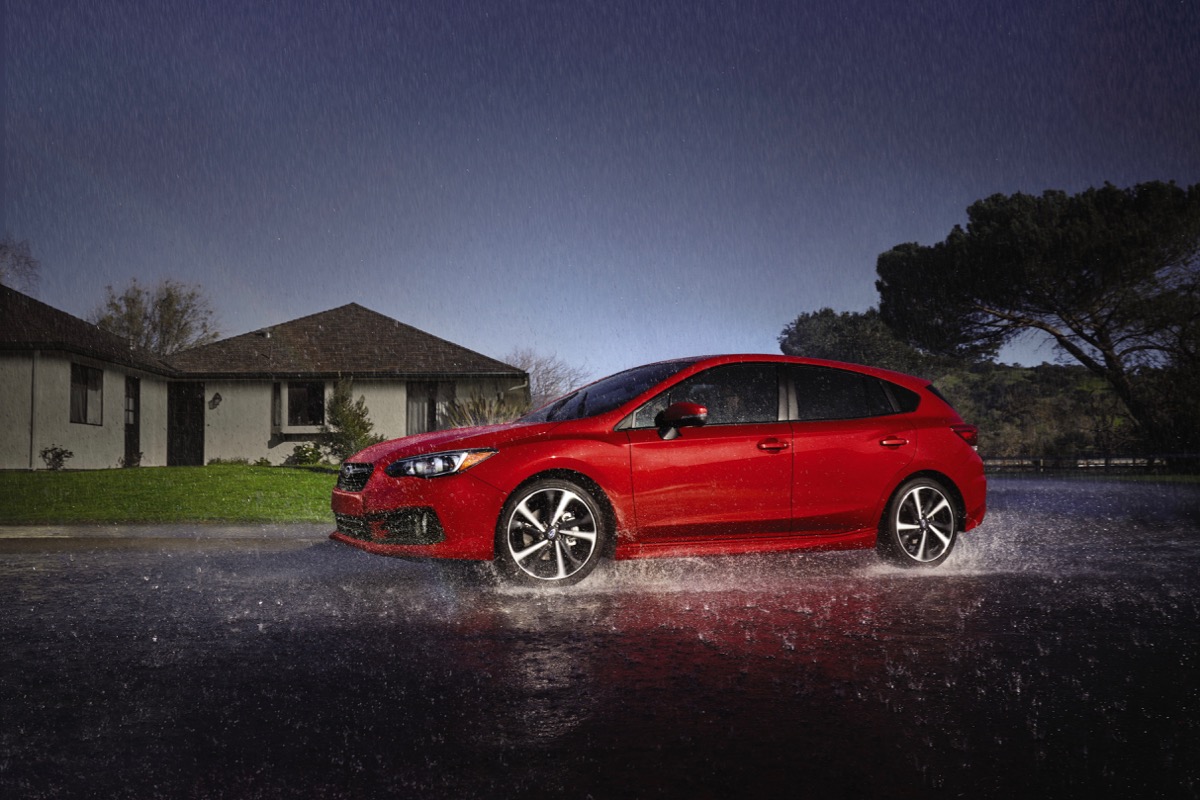 Both the 2021 Subaru Impreza sedan and hatchback body styles received an Insurance Institute for Highway Safety (IIHS) “Top Safety Pick” award, meaning they got the highest “Good” score in all crash tests. Both Impreza body styles missed out on a “Top Safety Pick+” award because their standard headlights only received a “Marginal” rating. The headlights available on the Limited trim level received a “Good” score, however. 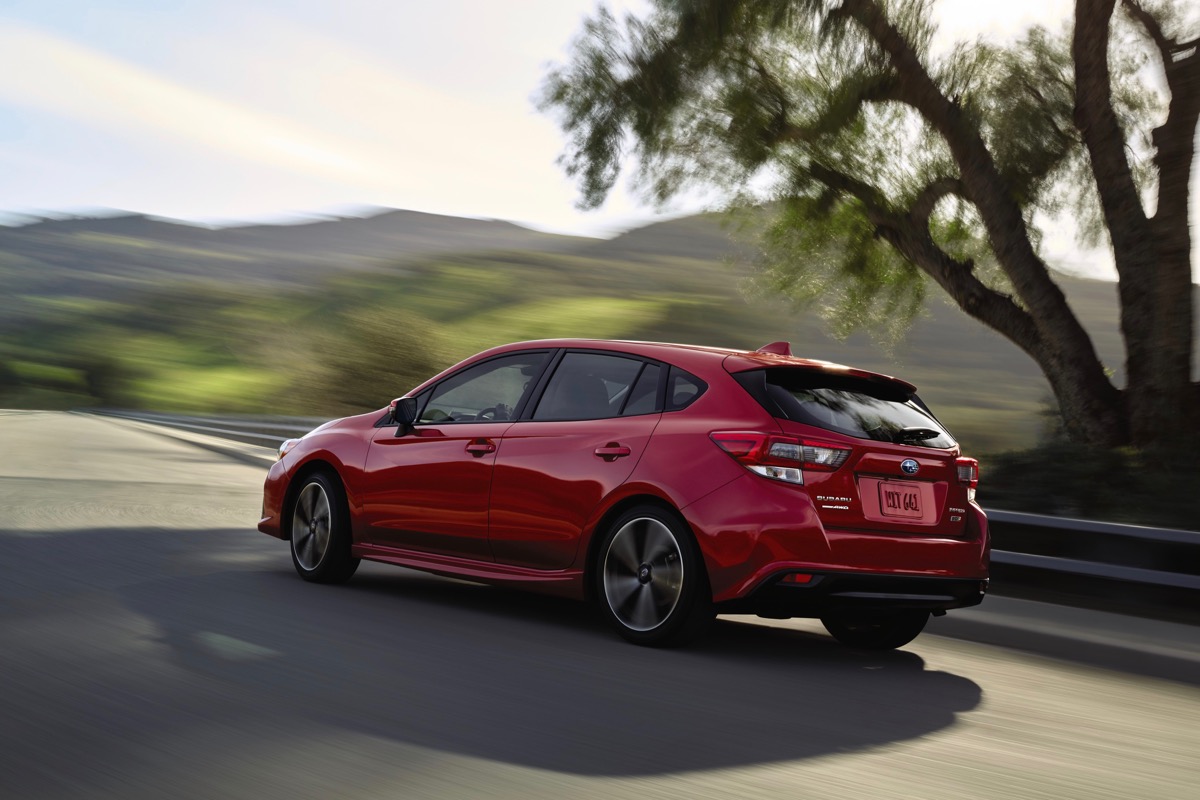 Subaru offers a five-year/60,000-mile powertrain warranty and three-year/36,000-mile basic warranty. That’s similar to what most other manufacturers offer, but Hyundai and Kia provide much longer warranty terms for the Elantra and Forte, respectively.

Standard AWD and EyeSight driver assist tech make the Impreza a fairly good value. The imminent departure of the Volkswagen Golf also leaves the Impreza as one of the few remaining compact hatchback choices. However, a redesigned Honda Civic sedan and hatchback are on the way for the 2022 model year. The Civic still won’t offer AWD, though, so the Impreza is likely to remain a good choice for new car shoppers in snowy climates.

What's your take on the 2021 Subaru Impreza?

Have you driven a 2021 Subaru Impreza?
Rank This Car

Enter your zip to see incentives for a new Impreza in your area.