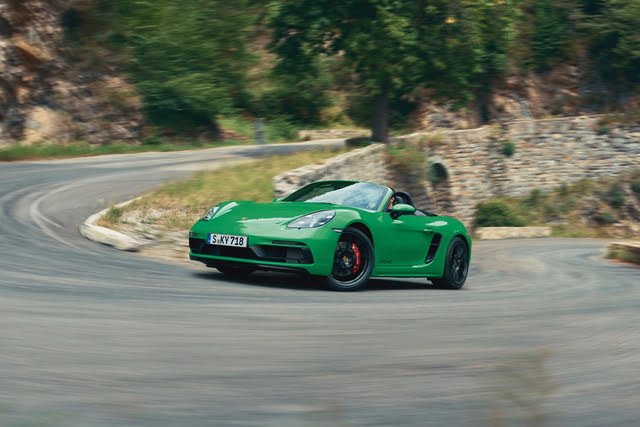 Looking for a New Porsche 718 Boxster in your area?

The current generation of Porsche Boxster was introduced for the 2017 model year, and has received minor updates since. For 2021, the Boxster gets new standard features and a new GTS 4.0 model. Alongside the Porsche 911 and Cayman, the Boxster competes against high-end sports cars like the Chevrolet Corvette, Audi R8, and Lexus LC.

The Boxster is available only as a convertible with a manual soft top. It’s instantly recognizable as a Porsche, sitting low on big, graceful, wheels. There’s nothing new for this year in terms of exterior styling, but that’s fine.

There are five trims for 2021: Boxster, Boxster T, Boxster S, Boxster GTS 4.0 (new for this year), and Boxster Spyder. The base engine is a 2.0-liter turbocharged flat-four good for 300 horsepower. The Boxster T builds on this with a short shifter, the Sport Chrono Package, and upgraded suspension. With the Boxster S, you get 350 hp courtesy of a 2.5-liter turbo flat-four. The Boxster GTS 4.0 and Boxster Spyder both feature flat-six engines measuring at 4.0 liters and rated for 394 hp and 414 hp, respectively. The GTS model gets a sport suspension and the Sport Chrono package, and the Spyder gets performance summer tires. All Boxster models are rear-wheel drive (RWD) and most have the choice of a six-speed manual or seven-speed dual-clutch automatic PDK transmission.

The interior features snug seating for two, in an upscale yet sporty design. Features are minimal, including dual-zone automatic climate control and heated seats, both of which are newly standard this year. A 7-inch touchscreen display hosts Apple CarPlay, also newly standard, Bluetooth, and an eight-speaker stereo system. Options include a choice of premium audio systems, navigation, proximity keyless entry, and upgraded upholstery packages and color palettes.

With small but important updates, the 2021 Porsche Boxster stays competitive amongst a tough set of rivals.

Enter your zip to see incentives for a new 718 Boxster in your area.