Looking for a New Polestar 2 in your area? 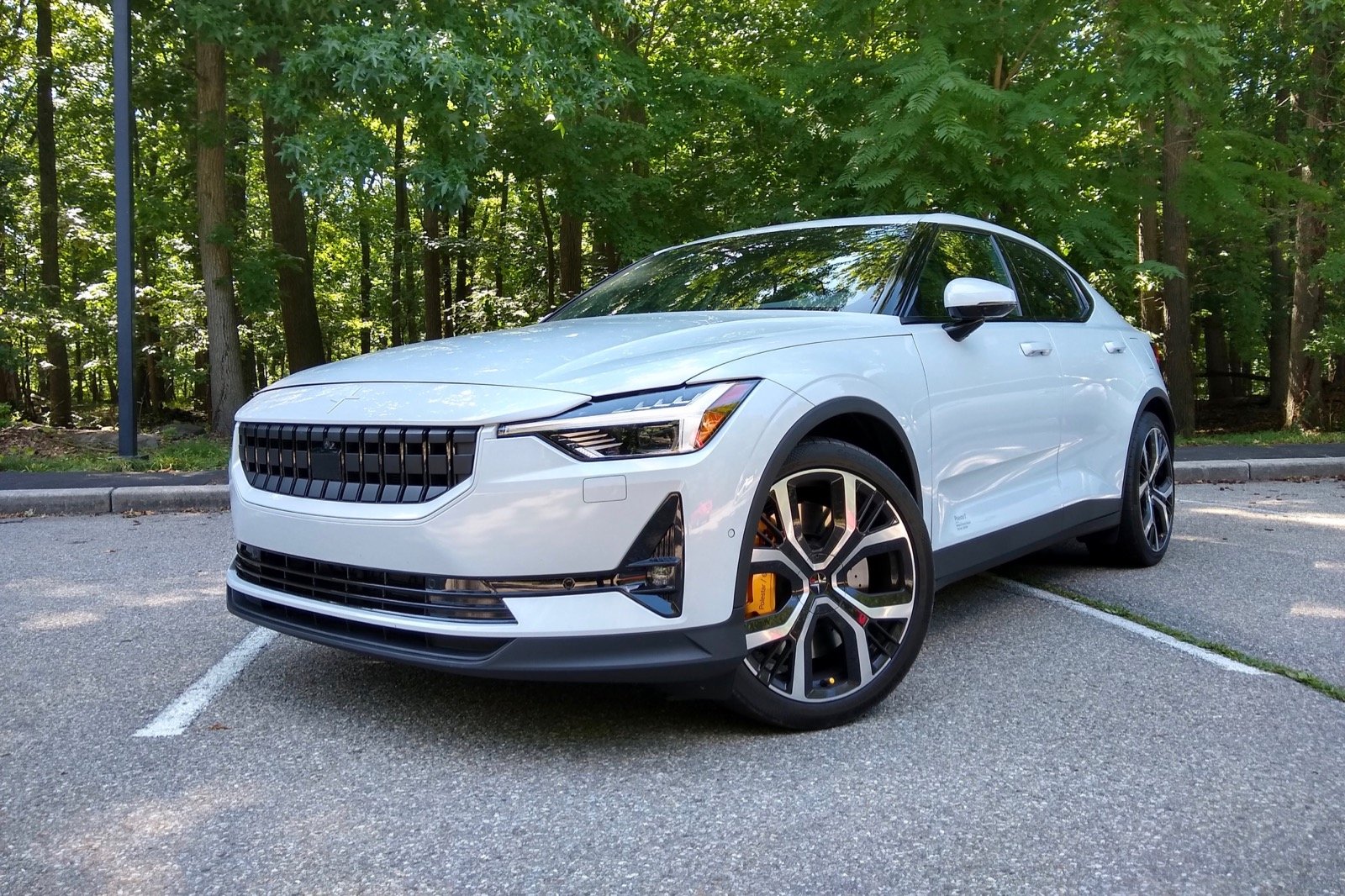 Polestar is a new brand, but it may seem familiar. That’s because Polestar is a spinoff of Volvo, using the Swedish automaker’s vehicle platforms, safety technology, and styling, with a name borrowed from Volvo’s one-time performance and racing division.

Polestar distinguishes itself from Volvo by focusing on green cars. Its first model was the Polestar 1 plug-in hybrid, but that limited-production coupe was more of a warm-up act. The all-electric 2021 Polestar 2 is the brand’s first mass-market model, and it's a logical rival to the all-conquering Tesla Model 3.

New brands from established automakers don’t have a great track record (see: Saturn, Scion), but Volvo felt the rise of electric cars demanded a different approach. For now, though, the 2021 Polestar 2 looks and feels very much like a Volvo with a different badge and a different powertrain. That’s not a bad thing, though. 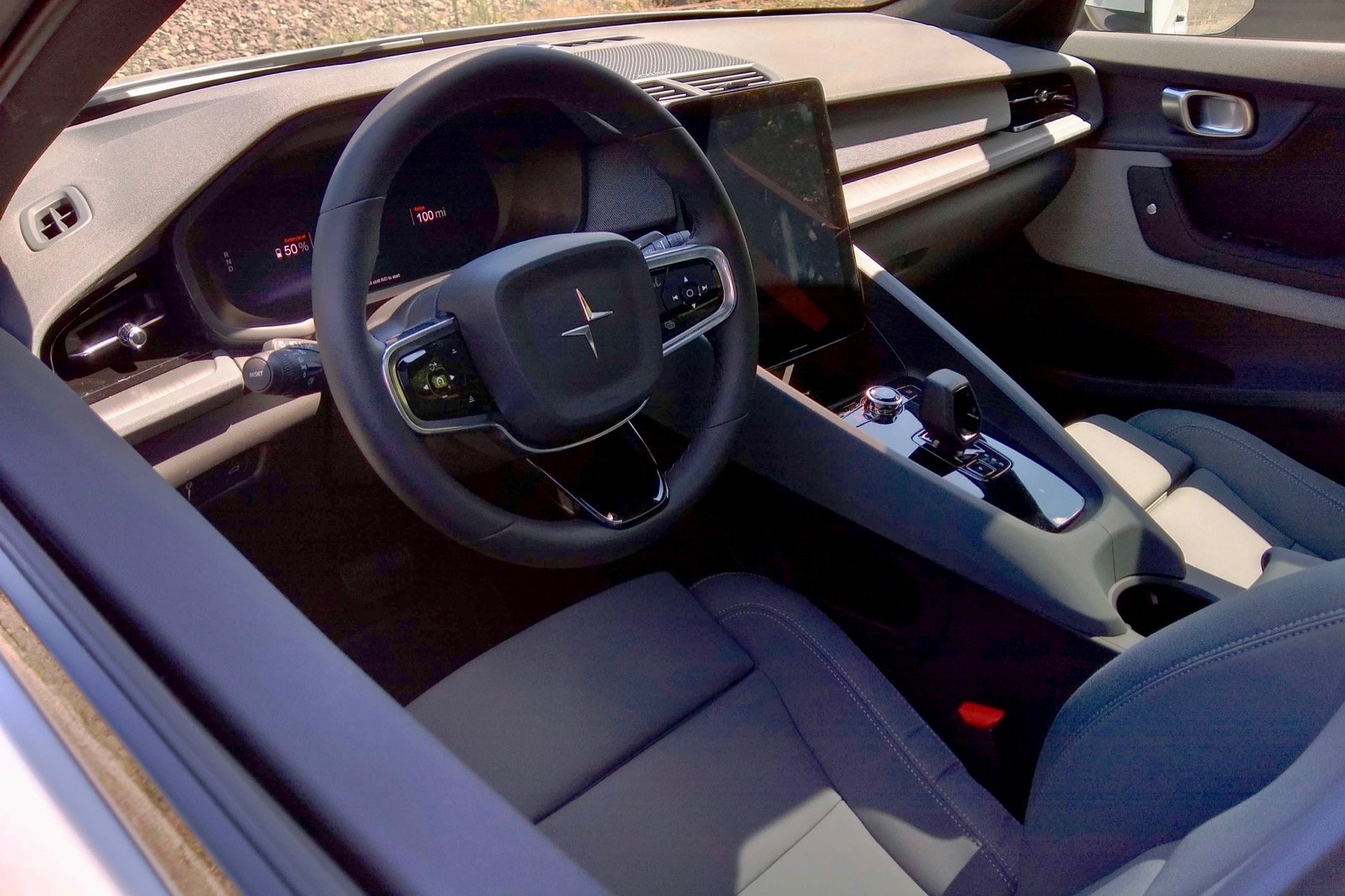 It may be from a separate brand, but the Polestar 2 inherits styling from parent-company Volvo. The car is essentially a production version of the Volvo 40.2 concept car from 2016, wearing the same exterior styling and riding on the same Compact Modular Architecture (CMA) platform. CMA isn’t an EV-specific platform; it’s also used for internal-combustion models like the Volvo XC40.

The Polestar 2 bends traditional body-style categories. It has a profile of a sedan, but instead of a trunk, the cargo area is accessed through a rear hatch—like a hatchback. Its taller ride height and plastic body cladding add a hint of SUV to the mix. This is a strategy that worked well with Polestar parent Volvo’s Cross Country models, cashing in on the popularity of SUVs while maintaining the more aerodynamic shape (drag coefficient is 0.27) of a regular car.

The interior styling also follows recent Volvo practice, with a minimalist look. However, the portrait-oriented infotainment touchscreen isn’t as well integrated as it is in Volvo models. Even on the entry-level Volvo XC40, the screen is blended into the dashboard. On the Polestar 2, it just sticks out, breaking up what is otherwise a nice-looking design.

Polestar takes its commitment to the environment a bit further than other automakers by offering a standard vegan interior, including carpets made from recycled plastic, recycled wood trim, and upholstery made from a fabric called WeaveTex (Nappa leather upholstery is optional). Materials appeared of similar quality to more traditional materials in similarly-priced cars, although Polestar also snuck in cheap-looking gloss-black plastic in places where it will likely get smudged or scratched easily. 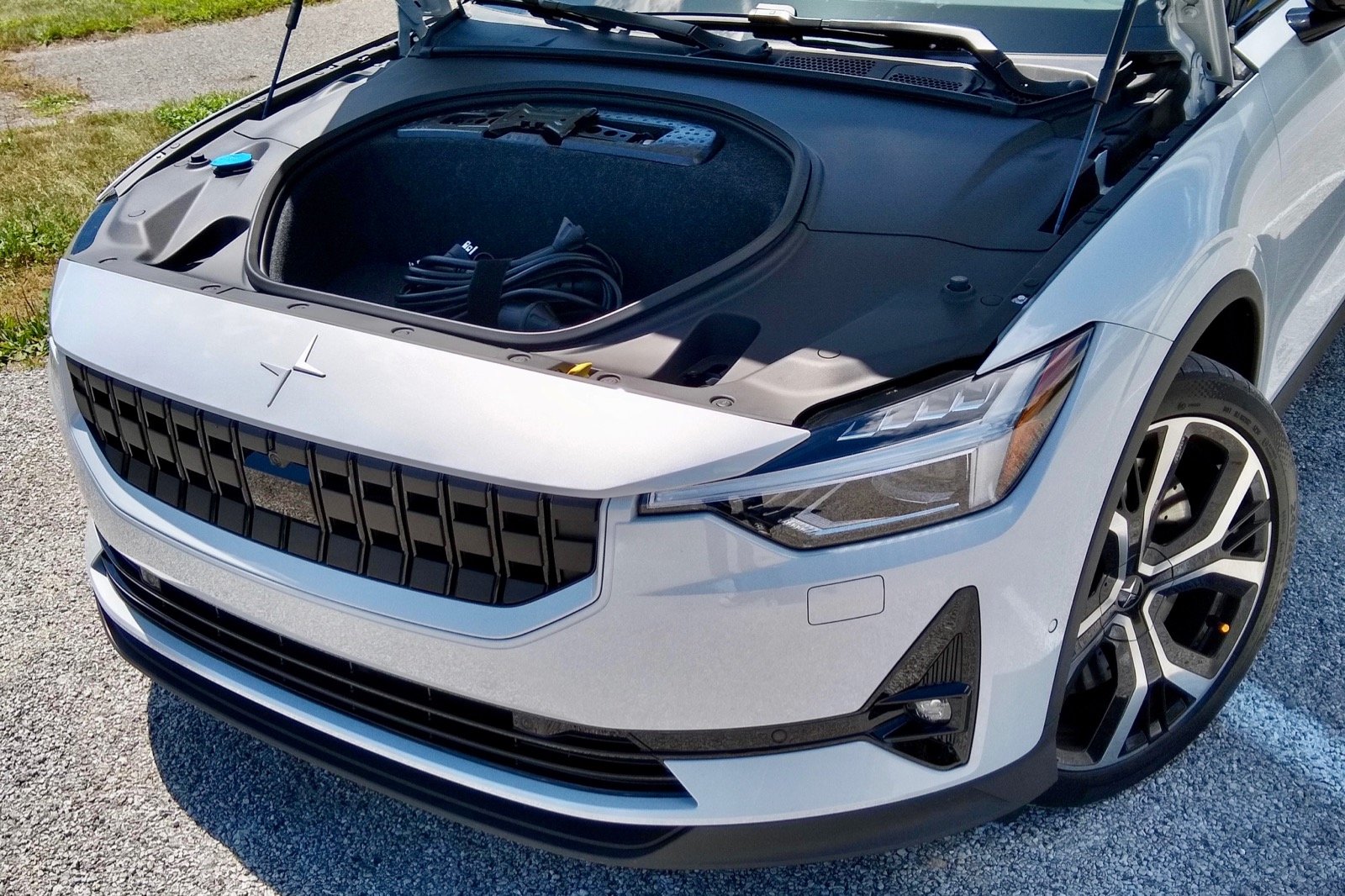 The sole powertrain configuration is a dual-motor all-wheel-drive (AWD) setup, with a combined output of 408 horsepower and 487 pound-feet of torque from the two electric motors. Polestar quotes zero to 60 mph in 4.4 seconds, which matches the Tesla Model 3 Long Range, but not the Performance version of that car.

Our test car also had the optional Performance Pack, which includes 20-inch wheels, Brembo brakes (with Polestar-specific calipers designed to reduce aerodynamic drag), and Öhlins adjustable dampers. This isn’t computer-controlled adaptive damping like one might normally expect to see in a car from a luxury brand. You have to actually get out of the car to manually adjust the dampers, but you also get 22 settings to play with.

With the dampers on one of their firmer settings, the ride was still fairly compliant—even on cratered New York City pavement. We didn’t get a chance to drive a base Polestar 2, but with the Öhlins dampers, the car cornered nice and flat. Regenerative braking allows for one-pedal driving in its most aggressive setting, but the mechanical Brembo brakes also provided plenty of stopping power, with good pedal feel. However, the brakes and suspension were let down by the steering, which felt like it could have used an upgrade to match the rest of the Performance Pack hardware. The steering wheel didn’t provide much indication of what the front tires were doing.

Only one battery-pack size is available: 78 kilowatt-hours, with 75 kWh of usable capacity. An EPA-estimated range figure isn’t available yet, and Polestar will only say that the 2 will achieve more than 200 miles of range. In a third-party test commissioned by Polestar, the car got 205 miles of range on a closed course in hot weather. Because heat (and the use of power-sapping air conditioning) can affect range, it’s likely that the official EPA range figure will be higher, but it’s hard to say how much higher.

A full recharge takes 11 hours using an 11-kilowatt home charging station, according to Polestar, or 22 hours from a standard 120-volt household outlet. So if you’re planning to buy a Polestar 2 (or nearly any other new EV, for that matter), it’s best to get a home charger installed.

The Polestar 2 is also capable of DC fast charging at up to 150 kW, which is fairly competitive. At that rate, the car can do an 80% recharge in 40 minutes, according to Polestar. 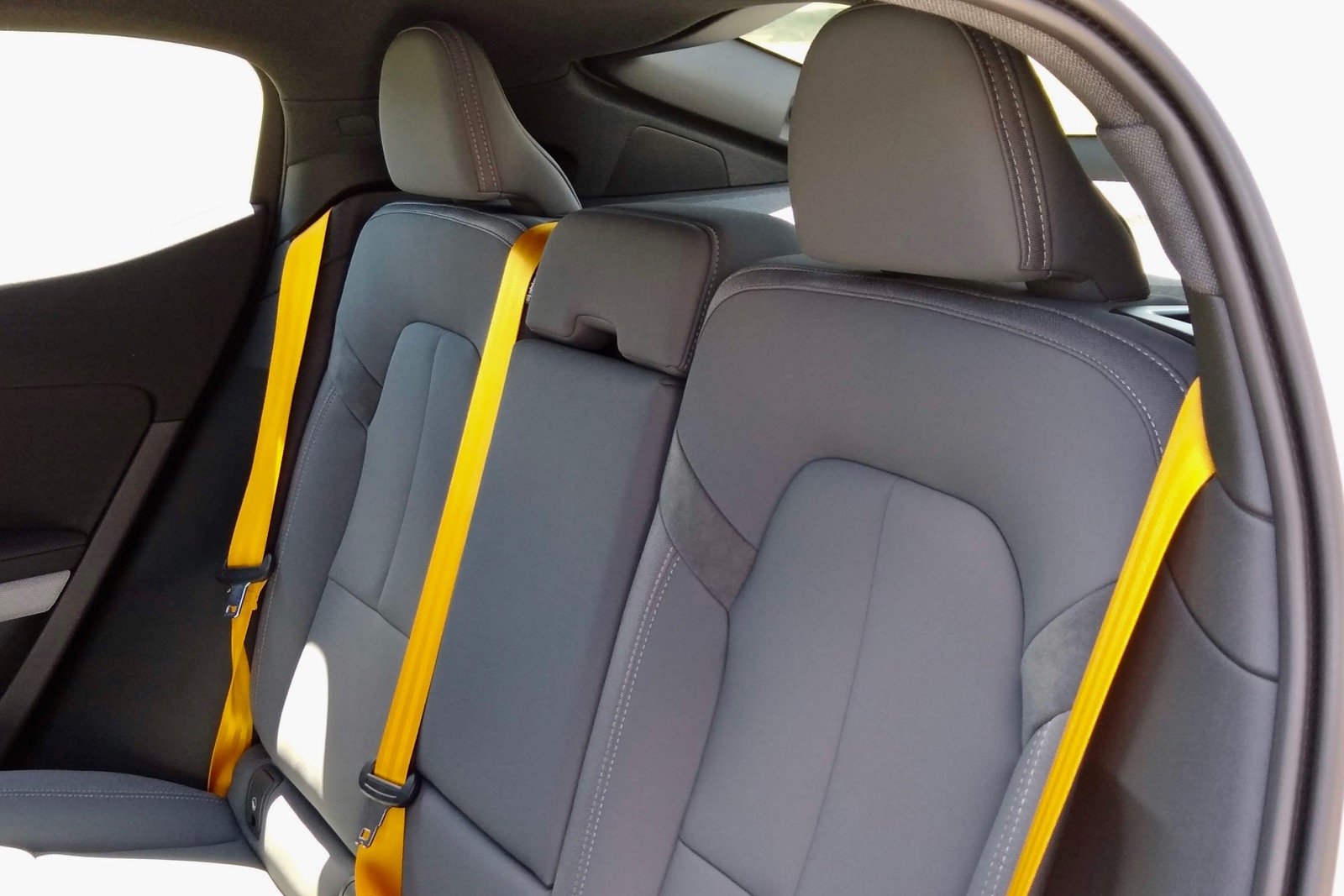 Polestar did something unusual with the interior packaging. Many electric cars have a long, flat, battery pack that sits under the floor. That raises the floor’s height and the seats along with it. Instead, Polestar dispersed the individual battery-pack modules throughout the chassis, placing some under the floor, some under the rear seats, and the rest down the centerline of the car.

This arrangement gives the Polestar 2 a pronounced center tunnel—like the transmission tunnels in gasoline cars—but it also lowers the seat heights. That provides a more car-like feel and, along with a fairly upright roof, helps create more headroom. However, the driving position is very much that of a normal car, which may be a liability in a time of booming SUV sales, when most other similarly-sized EVs offer a somewhat higher perch. If you actually like driving, you’ll like the setup in the Polestar 2. If you want an SUV-like view of the road, you’ll be disappointed.

The front seats are fairly roomy and offer a nice compromise between supportive bolstering and comfort. The rear seats have an adequate, but not overly generous, amount of space. The Model 3 offers more rear legroom, thanks to a longer wheelbase.

The U.S.-spec Polestar 2 is also rated to tow up to 2,000 pounds. That’s not a lot (and the European version is rated to tow 3,300 pounds), but still pretty good considering many EVs aren’t approved for towing at all. 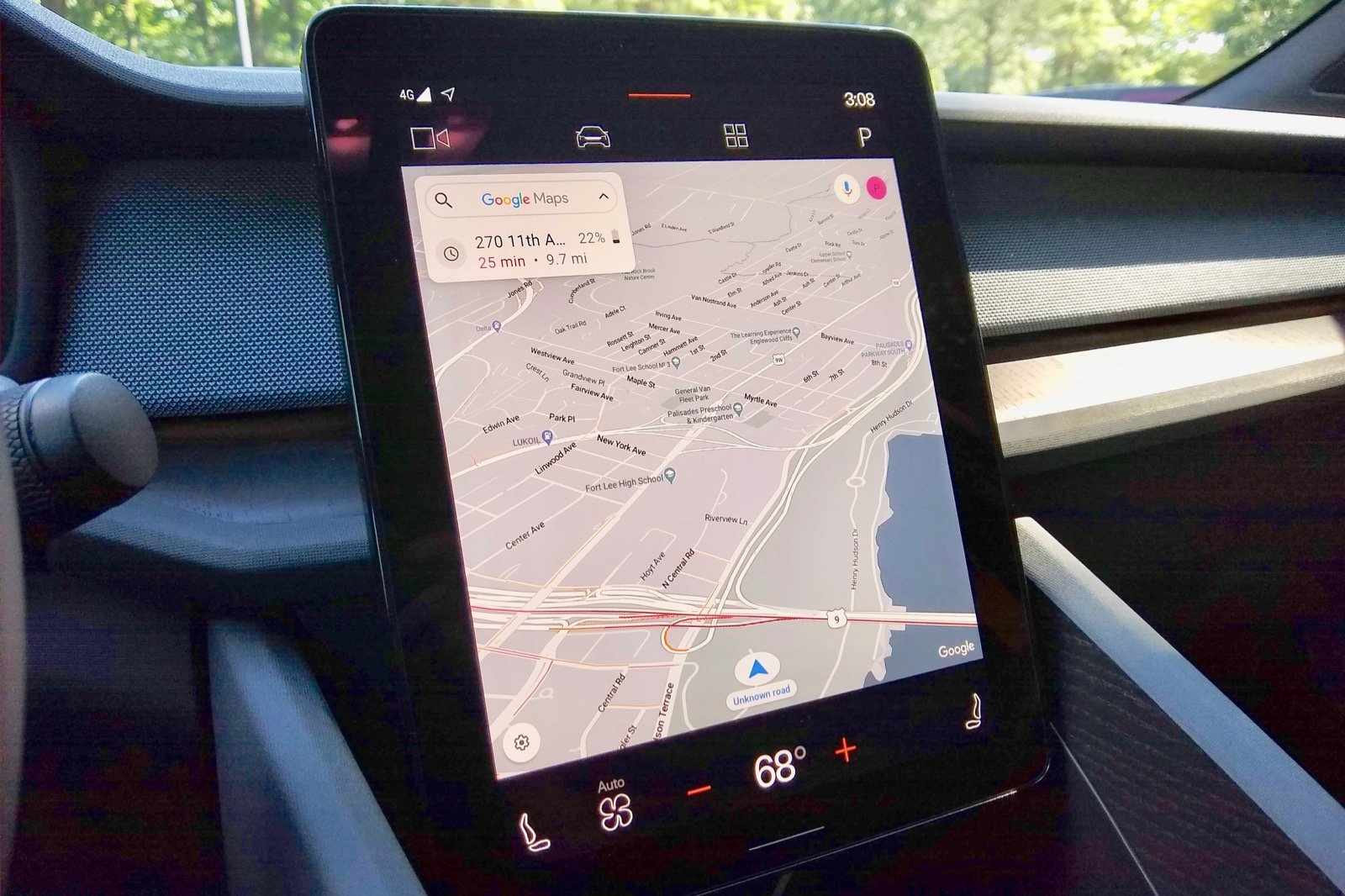 The Polestar 2 is the first production car with Android Automotive operating system (OS), meaning its entire infotainment system is Android-based, and pre-populated with Google apps. So instead of generic voice control and navigation, Google Assistant and Google Maps are the defaults. Android users can also sync their personal Google accounts to the car for more customization.

The standard infotainment setup includes an 11.1-inch portrait-oriented touchscreen and 12.3-inch digital instrument cluster, with Android Auto, and basic Bluetooth compatibility available at launch. Apple CarPlay will be added through an over-the-air (OTA) software update in 2021. Non-Android can connect their phones to the car to make calls and send text messages, but Polestar only anticipates compatibility with “select” Apple apps.

The Android-based infotainment system means that your mileage will vary depending on how much you like Google’s interfaces. Menus and graphics are essentially the same as they would be on a smartphone or desktop. Everything is rendered well, with sharp detail, and the screen is responsive and lag-free, but if you prefer iOS to Android when it comes to layout, you’re out of luck.

The navigation system even makes the same mistakes Google Maps does on other devices: when looking for directions to a public park, both the car and an Android phone running Google Maps failed to recognize the road leading to the entrance and attempted to send the driver on a nonsensical detour.

Polestar also plans to add a Digital Key feature after launch through an OTA update. This will let drivers use a smartphone in place of a traditional key fob, as well as grant remote access to other drivers, so people can borrow the car without swapping keys. 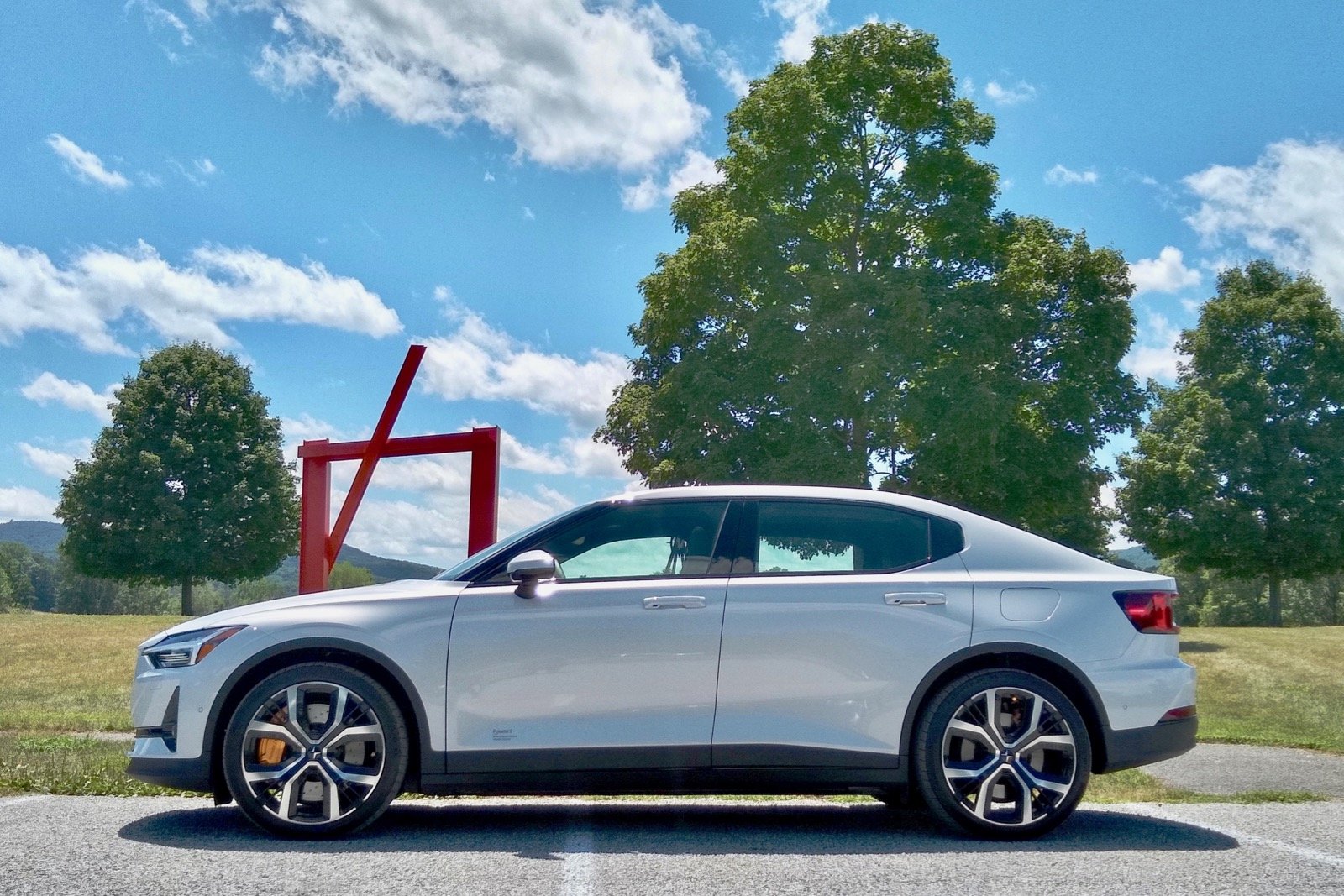 Crash-test ratings from the Insurance Institute for Highway Safety (IIHS) and National Highway Traffic Safety Administration (NHTSA) aren’t available yet, but Polestar claims several EV-specific safety features, including crash structures designed to account for the lack of an engine ahead of the passenger compartment, and protective structures around the battery pack.

The Polestar 2 also gets the full complement of Volvo driver-assistance tech as standard equipment. That includes the Volvo Pilot Assist system, which combines adaptive cruise control with automated lane centering for highway driving. Polestar has said its version of Pilot Assist will use the cloud to find out about road hazards in real-time, and will gradually improve through OTA updates. However, it can’t execute automated lane changes like Tesla Autopilot or the latest version of General Motors’ Super Cruise, which is likely to appear in some upcoming GM electric cars. 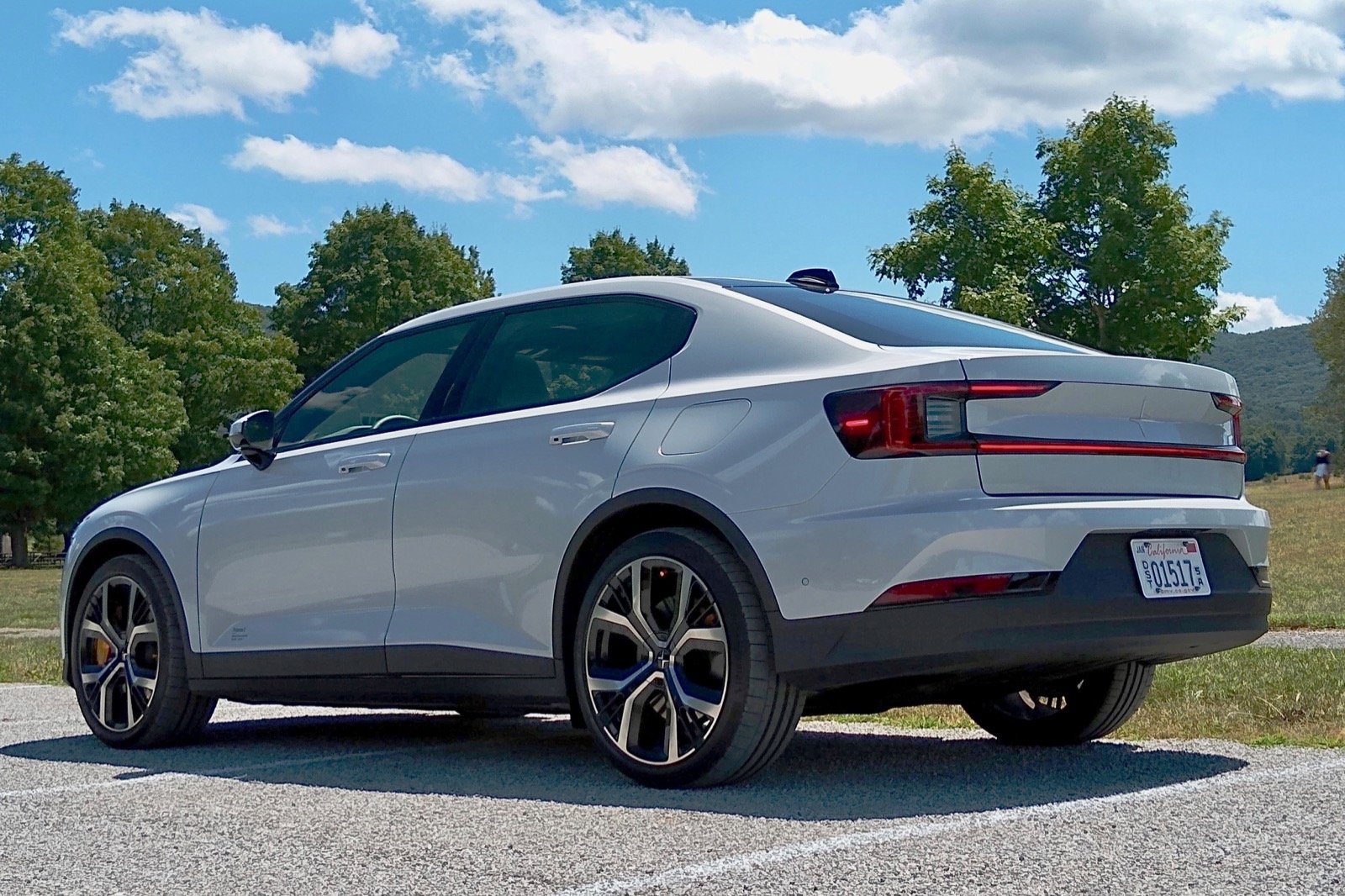 The Polestar 2 is initially available only in fully-loaded Launch Edition configuration with an MSRP of $61,200 (including a mandatory $1,300 destination charge). That buys a fairly well-equipped car, with dual-motor AWD, a long list of standard driver-assist tech, and the 11.1-inch touchscreen infotainment system. Polestar also qualifies for the full $7,500 federal EV tax credit, as well as various state and local incentives, depending on where you live.

As with other electric cars, running costs will be much lower than a gasoline vehicle, thanks to the low cost of electricity and fewer regular maintenance needs. However, the lack of published EPA efficiency ratings means we can’t compare electricity consumption to other cars yet.

The base price puts the Polestar 2 in a space currently occupied only by high-end versions of the Tesla Model 3 and Model Y, between less-expensive (but less-premium) vehicles like the Chevrolet Bolt EV and Nissan Leaf, and larger, more luxurious models like the Jaguar I-Pace, Audi E-Tron, and Tesla Model S and Model X.

The Polestar 2 can’t match Tesla in range or acceleration, but it shouldn’t be dismissed because of underwhelming numbers. Instead of just an electric powertrain or an impressive piece of tech, the Polestar 2 feels like a complete car. It would be appealing whether it was powered by electricity or gasoline, and it feels aimed at normal car buyers rather than early adopters.

Polestar is taking a similarly holistic approach to the manufacturing process, promising to ethically source cobalt for its batteries and to be transparent about the total lifecycle carbon emissions of its vehicles—something to consider if your primary reason for buying an electric vehicle is the environmental impact.

It’s been almost a decade since the first modern mass-market electric cars went on sale, but they’re still largely thought of as futuristic curiosities. The Polestar 2 doesn’t feel like the car of the future, it feels like a car built for the realities of today.

Enter your zip to see incentives for a new 2 in your area.