Looking for a New Nissan GT-R in your area? 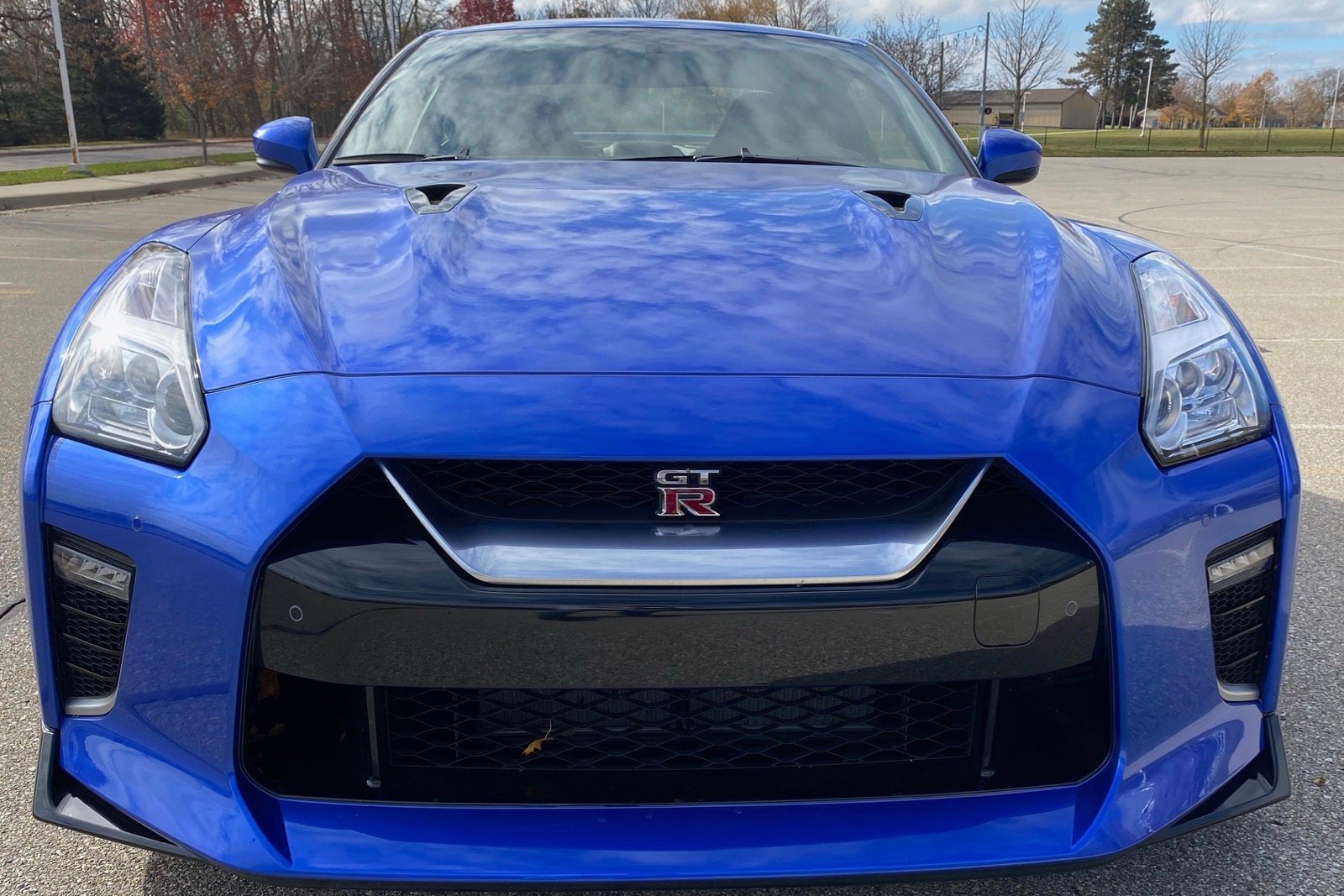 Nissan’s hottest model returns for 2021 breathing fire, burning asphalt, and soothing souls. The 2021 Nissan GT-R Premium not only romps, but it also cruises. Capable of blistering acceleration and awe-inspiring cornering, the GT-R can also be calm, composed, and actually comfortable—not descriptors that would have been applied to earlier generations of the car nicknamed "Godzilla." 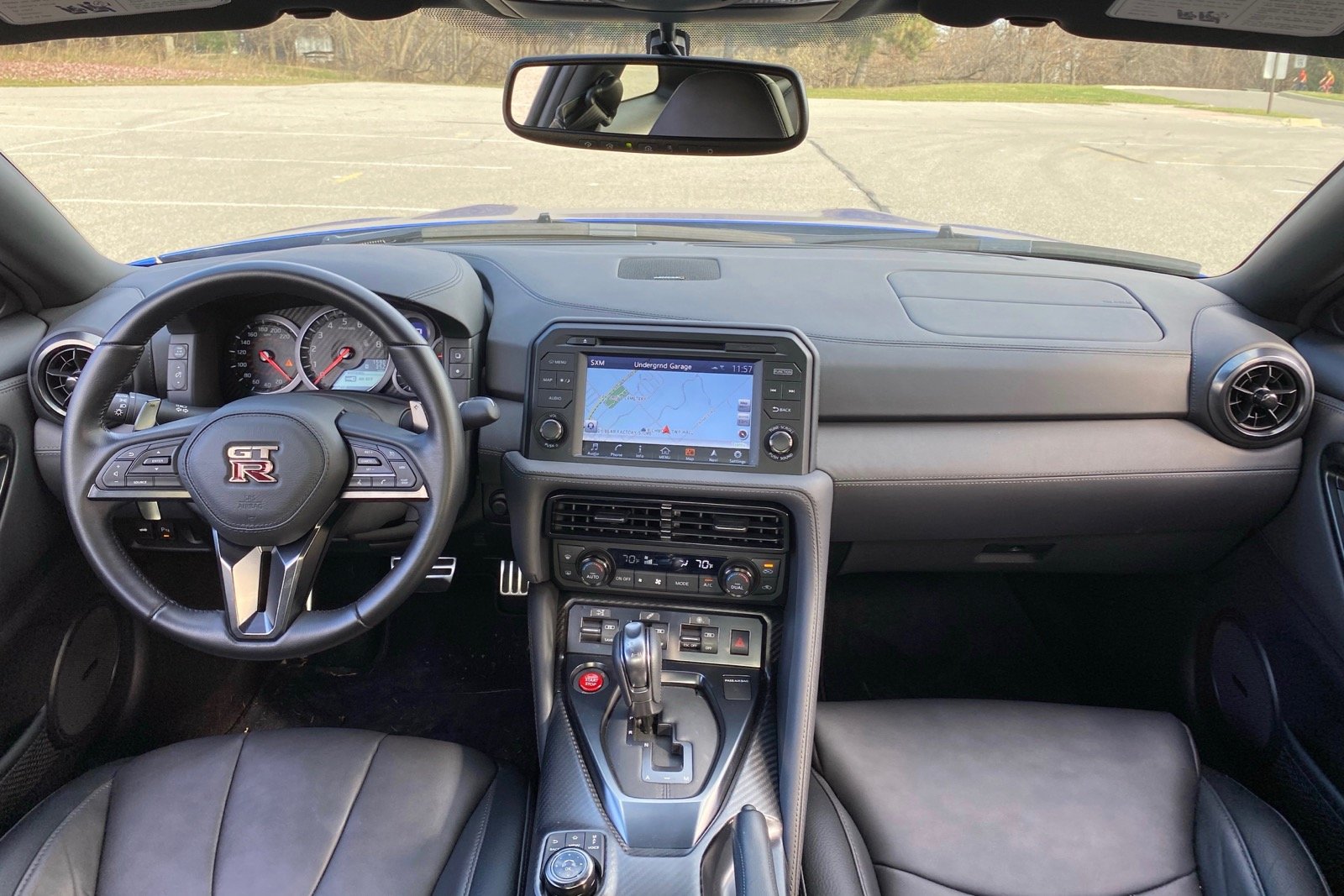 The GT-R claims roots back to the Nissan Skyline GT-R, a Japanese-market model that was produced between 1969 and 1973, and again from 1989 to 2002. The Skyline GT-R was a legend in the Japanese Touring Car Championship series. Nissan resurrected the GT-R name for a new vehicle that arrived in the US as a 2009 model, and it has undergone evolutionary upgrades and facelifts since then.

At first glance, the GT-R doesn’t have the supercar “wow” factor. But first impressions can be deceiving. Drive the GT-R, and then look at it again, and it looks better. In fact, it looks great. Because it has a traditional layout—front-engine/all-wheel drive (AWD)—it looks more like a muscle car than a supercar, with a long hood, two doors, and a fast roofline that ends in a short trunk deck. A tasteful, yet beefy, wing adorns the trunk lid. Four big, round, taillights dress the rear, subtly mirrored by four big tailpipe openings in the lower rear fascia. The more you look, the more the details stand out, like the way the inbound taillights are notched into the trunk lid, or the way the pop-out door handles are frenched into the doors. The GT-R has a confident stance, bold but not blustery.

Inside, the cabin is all business. Leather, carbon fiber, and real metal construction feel like they were fitted by master craftspeople. The design is functional, not particularly beautiful, but purpose-built. Surprisingly roomy in the front row, the seats are supportive and comfortable enough for all-day driving. The second row, while attractive, is very tight, especially with a tall driver behind the wheel. The GT-R should be considered a 2+2, with the second row reserved for occasional, short-hop use. 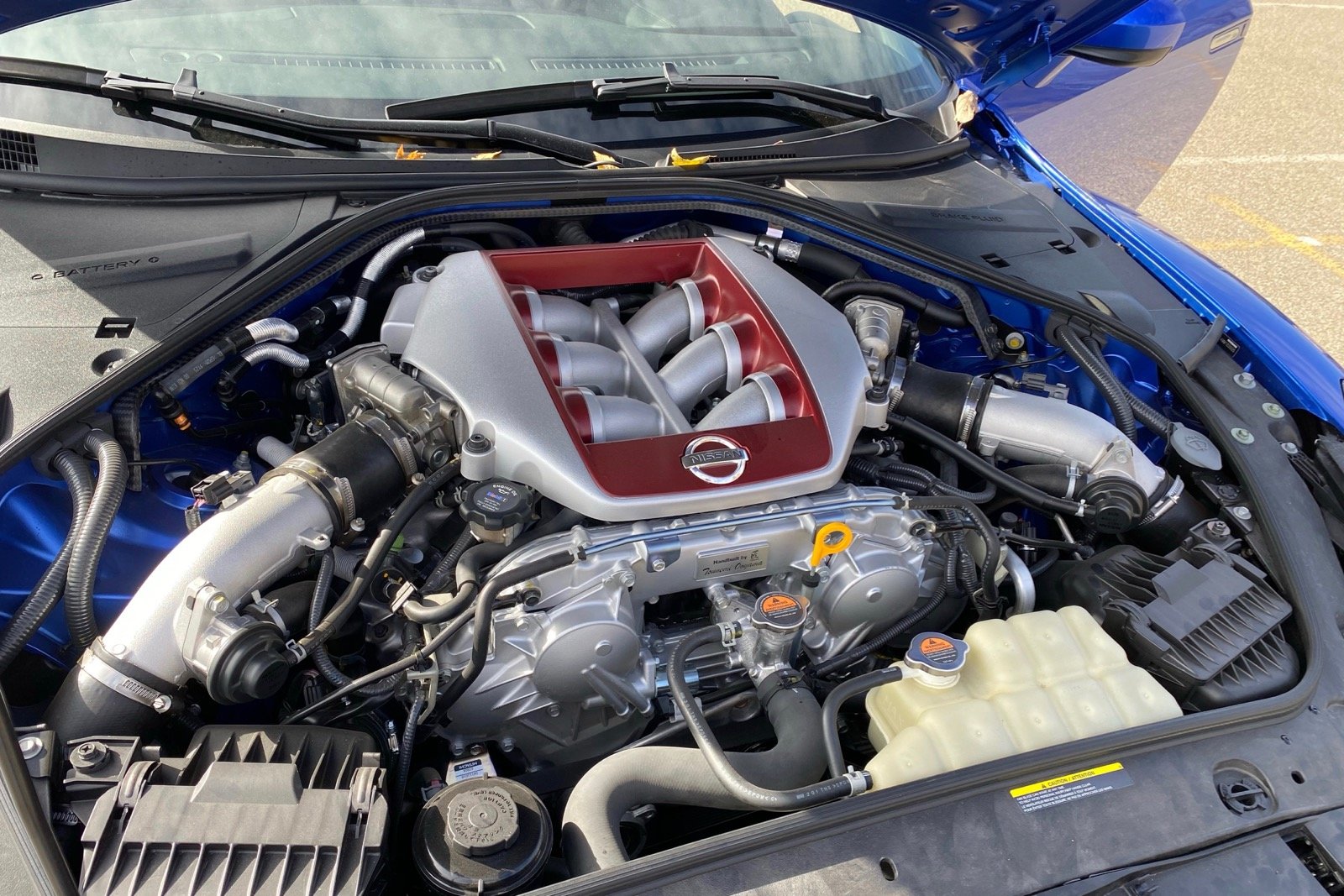 While the GT-R may look like it belongs in the muscle car genre, it might scoff at that grouping. Rather than the American penchant for a rip-snorting V8 and rear-wheel drive (RWD), the GT-R opts for a refined twin-turbocharged V6 and AWD. The hand-assembled 3.8-liter twin-turbo V6 puts out 565 horsepower and 467 pound-feet of torque in the GT-R Premium model.

The GT-R uses a six-speed dual-clutch automatic transmission (DCT) with paddle shifters. An “R mode” can be selected with a center stack toggle switch, prompting more assertive downshifts. The all-wheel-drive system is rear-wheel biased, using an independent rear transaxle. Up to 50% of torque can be automatically directed to the front axle, depending on speed, lateral acceleration, steering angle, tire slip, road surface, and yaw rate.

Suspension incorporates the Bilstein DampTronic driver-adjustable shock-absorber system, with three settings for variable driving situations: Normal, Comfort, and R. Steering is speed-sensitive rack-and-pinion with an aluminum steering rack. The GT-R also boasts a titanium exhaust system. Sound from the exhaust, engine, and road noise is controlled by an active noise cancellation system, but still reaches the cabin in healthy amounts—at least if you’re a fan of the V6 growl, that is.

Driving the GT-R is exciting and rewarding. We didn’t measure acceleration or top speed but have no doubt that the GT-R Premium is capable of going from a standstill to 60 mph in three seconds or quicker—definitely in supercar range. A top speed of 205 mph has been reported. That’s fast. Like many really fast cars, the GT-R seems to settle in as speeds increase, inspiring confidence. Living in the United States, where speed limits top out below three figures, anyone who buys a GT-R should invest in track time to give the car a proper workout in a safe, legal, environment. It would be a real shame to keep this stallion in the corral, and a dangerous act to open it up on public roads. 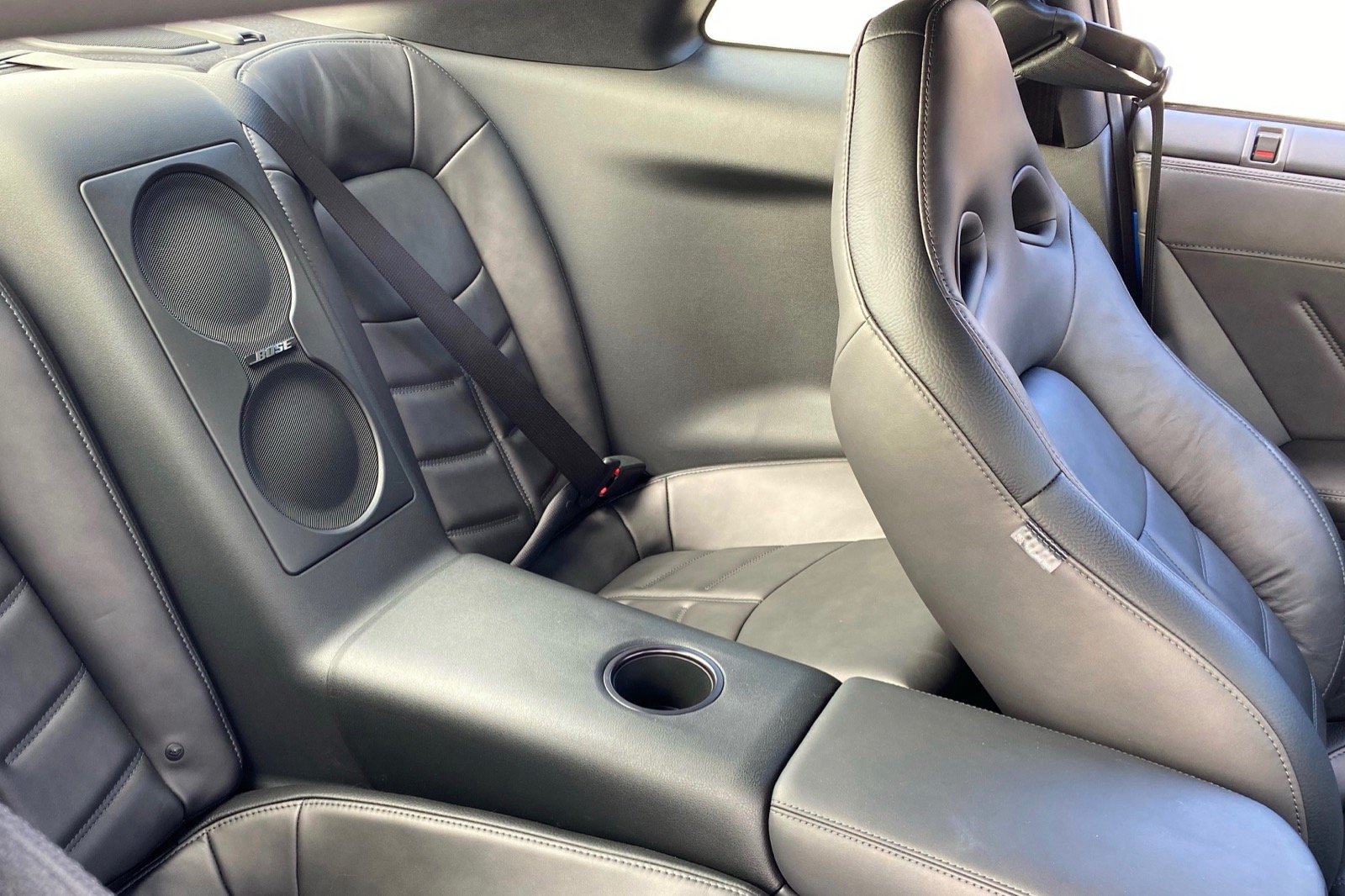 The GT-R conforms to a design and engineering philosophy of form following function. Many of its features and attributes, both exterior and interior, are dictated by function. It has a reinforced hood with pronounced character lines. Not only does this look great, but it also greatly improves aerodynamic performance at high speeds, preventing hood deformation. Similarly, the front spoiler curves under the nose of the car slightly, maximizing airflow at the lower edge, countering lift, and improving stability. The fixed spoiler at the back of the car helps provide stability and downforce at speed, and side vents and moldings are all designed to manage airflow and to provide cooling to brakes and other components.

Inside, things are similarly arrayed. The cockpit layout is definitely driver-centric. The 8.0-inch touchscreen infotainment interface is at the top of the center stack, as close to the driver’s line of vision as possible without impeding forward visibility. The steering wheel, dressed with buttons for easy access, is tilt-and-telescope adjustable. The instrument cluster moves up and down with the steering wheel as a unit, maintaining the perfect ergonomic relationship and view through the steering wheel for the driver. The one misstep in the front cabin is the position of the rotary dial for the infotainment system (the “Display Command control”) on the left (driver’s) side of the center console, next to the driver’s thigh, where it can be accidentally activated by the driver’s forearm. Bummer.

Even though legroom in the second row is impossibly tight, the two bucket seats are actually quite comfortable for passengers who can get to them, and a cup holder is thoughtfully provided in the center armrest. 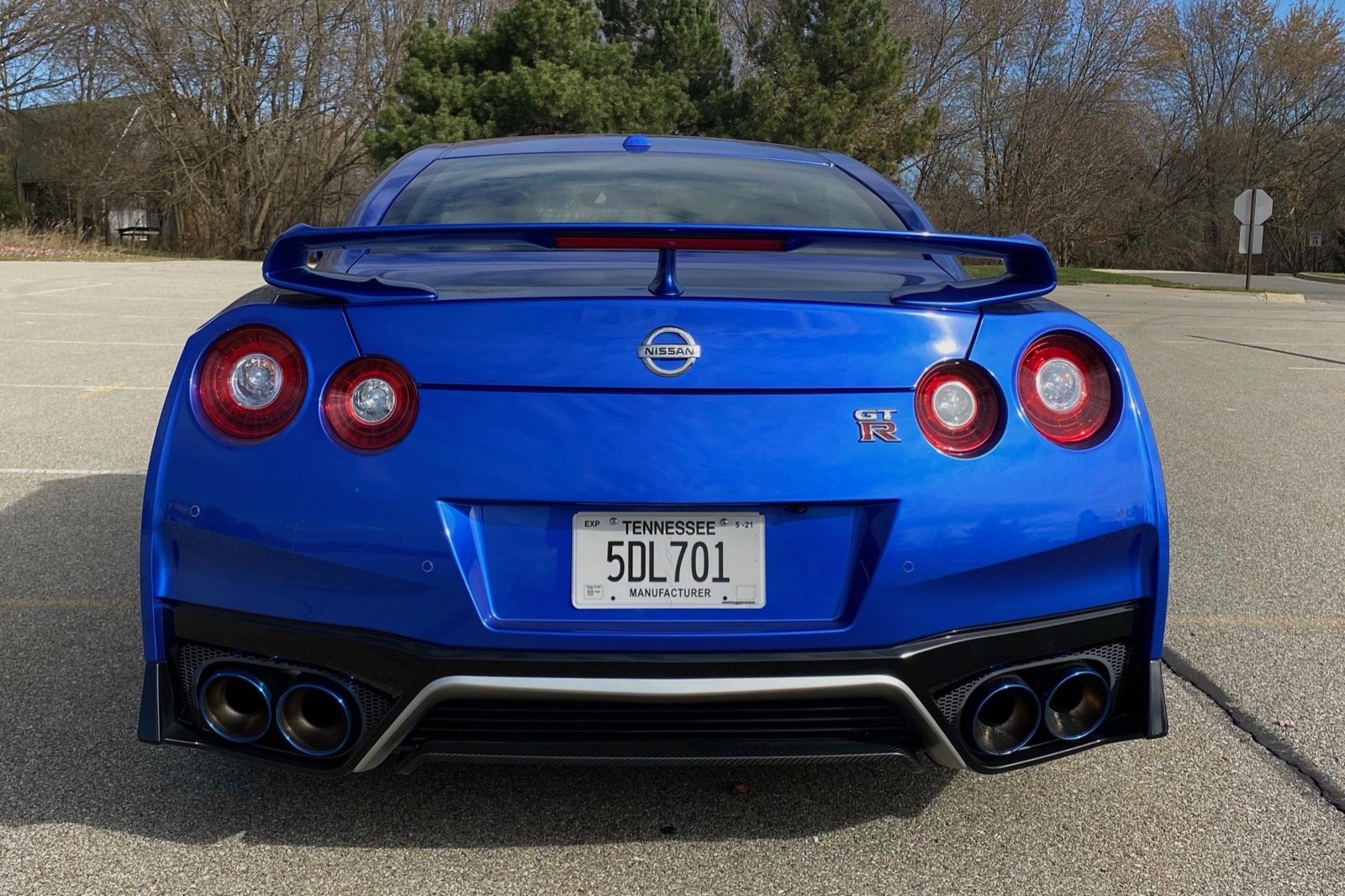 The GT-R is not loaded with ground-breaking technology. Standard NissanConnect and NissanConnect services are included, along with Bluetooth hands-free, audio streaming, and text messaging assistant. An 11-speaker Bose Premium Audio system with AM/FM/CD, DVD-video playback, and active noise cancellation is standard, with Apple CarPlay, Nissan Navigation System with voice guidance, and a (federally-mandated) rearview camera are controlled through the 8.0-inch touchscreen interface. The audio is a little disappointing compared with many of the higher-end systems we’ve heard lately and would benefit from an aftermarket upgrade.

Front and rear parking sensors are standard, always welcome in an expensive vehicle like the GT-R. Features you’d expect in a modern car, like dual-zone automatic temperature control, a proximity key, push-button ignition, HomeLink universal transceiver, and a driver-configurable multi-function display are all standard, too, along with LED headlights, LED taillights, LED daytime running lights, and power-folding heated side mirrors.

Nissan has concentrated on making the GT-R a genuine driver’s car, a track-worthy tool for serious enthusiasts. And it is that, no question. The tech is concentrated in the powertrain, suspension, steering, transmission, and braking systems, and in the manufacturing processes that have led to precision execution. 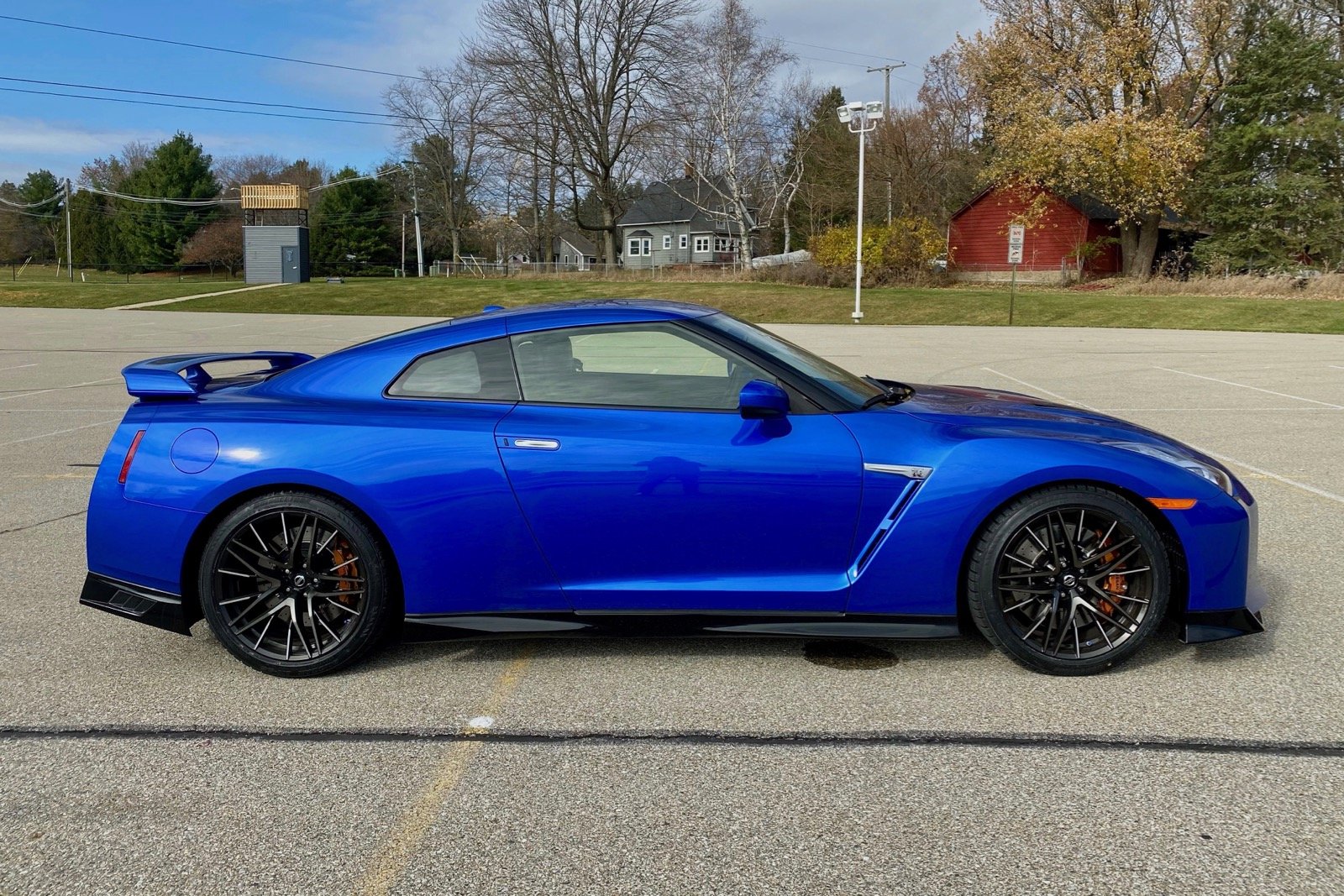 Safety is one area where Nissan could have reached into its parts bin for advanced driver assistance systems, but chose not to.

If you’ve become accustomed to such safety systems as blind-spot monitoring, lane-departure warning, adaptive cruise control, lane-keep assist, and automatic emergency braking, you’ll have to recalibrate your assumptions. None of those safety features are standard or available on the GT-R. This is a throwback, old-school, drive-it-yourself car.

This is not to say that the GT-R doesn’t have safety systems—it does. It has driver and front-passenger airbags with dual-stage inflation, seat-belt sensors, and occupant-classification sensor, along with driver and front-passenger seat-mounted side-impact supplemental airbags, roof-mounted curtain side-impact supplemental airbags for front-seat occupant head protection, and LATCH connectors in the second row. It has impact safety, with front and rear crumple zones, an energy-absorbing steering column, hood buckling creases, knee bolsters, and high-strength side-door guard beams.

To help avoid accidents in the first place, the GT-R has four-wheel anti-lock braking with Brembo six-piston monoblock calipers in front/four-piston in the rear, powered with brake assist and electronic brake-force distribution. Traction control, vehicle-dynamics control, hill-start assist, and yaw rate feedback control all help the driver to keep the car on the road. There’s even a Snow mode function for the driver who just can’t resist driving a supercar in the winter weather. 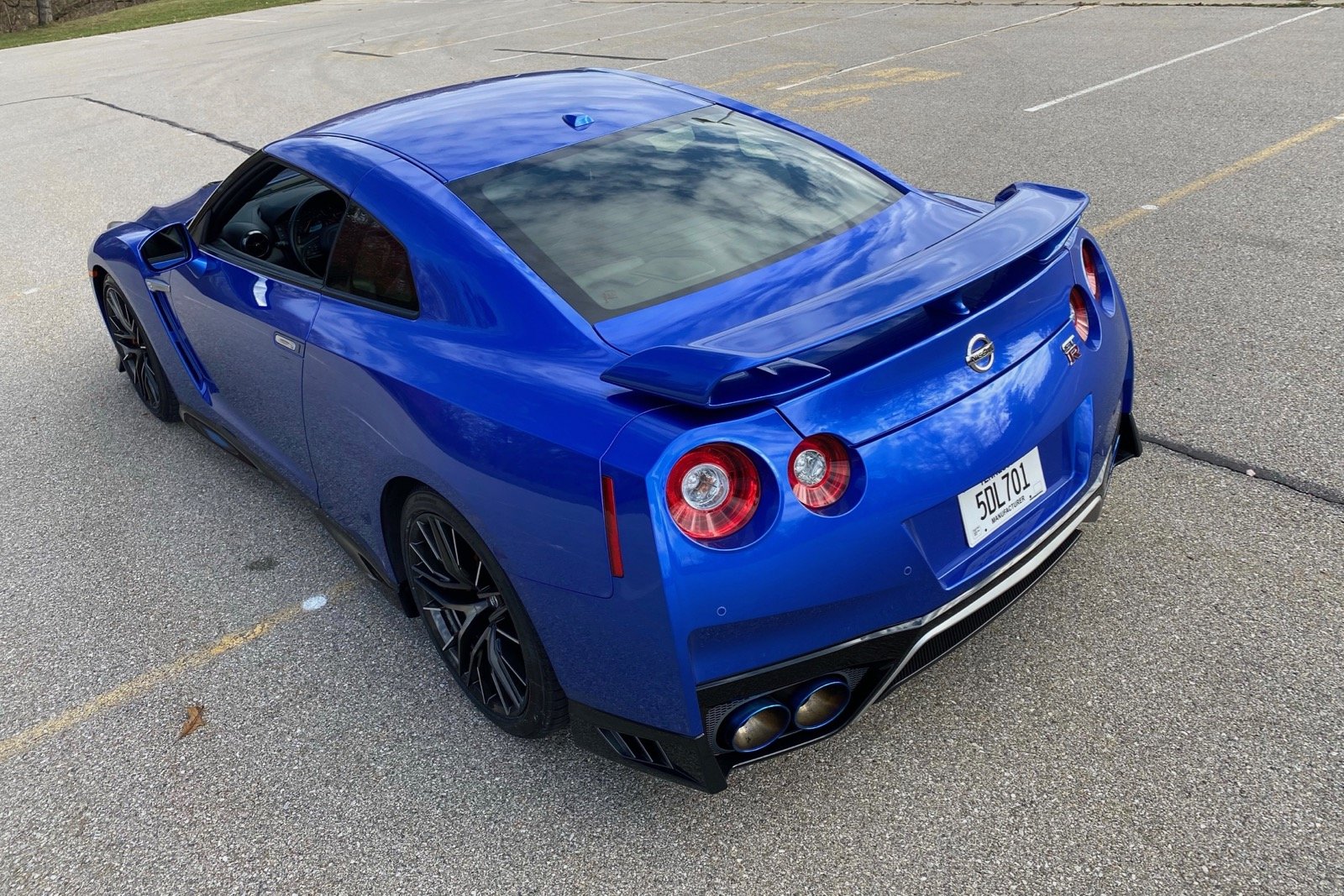 This model year, there’s also a GT-R NISMO trim level starting at $210,740. If the GT-R Premium is for serious drivers, the NISMO model is for dedicated track animals. It uses the same turbochargers developed for the GT3 race car version of GT-R, and squeezes out 600 hp and 481 lb-ft of torque from its 3.8-liter V6 engine, along with other go-fast features and Recaro bucket seats.

You could compare the GT-R with several genres of vehicle, and depending on your taste and needs, the comparison would be valid. If you look at the GT-R and see a muscle car, measure it against the Ford Mustang Shelby GT350R (starting at $73,435), Dodge Challenger SRT Hellcat Redeye Widebody (starting at $78,695), and Chevrolet Camaro ZL1 (starting at $65,590).

The 2021 Nissan GT-R Premium is a compelling car. It is fun to drive, beautiful to look at, and it promises to provide a rewarding relationship to its lucky owner.

Cballegeer One problem it’s a Nissan

GuruL4W5D Counter-problem to your problem: it's a platform with more potential, arguably, than almost any supercar. A Premium GT-R FBO/e85 will beat a 911 Turbo S for 1/2 the price. Continue to upgrade the platform, and the results can be seen at your local or nearest Airstrip Attack competitions.

Enter your zip to see incentives for a new GT-R in your area.