Looking for a New Mercedes-Benz GLC-Class in your area?

The GLC is blends performance and cutting-edge technology with standout refinement and comfort. 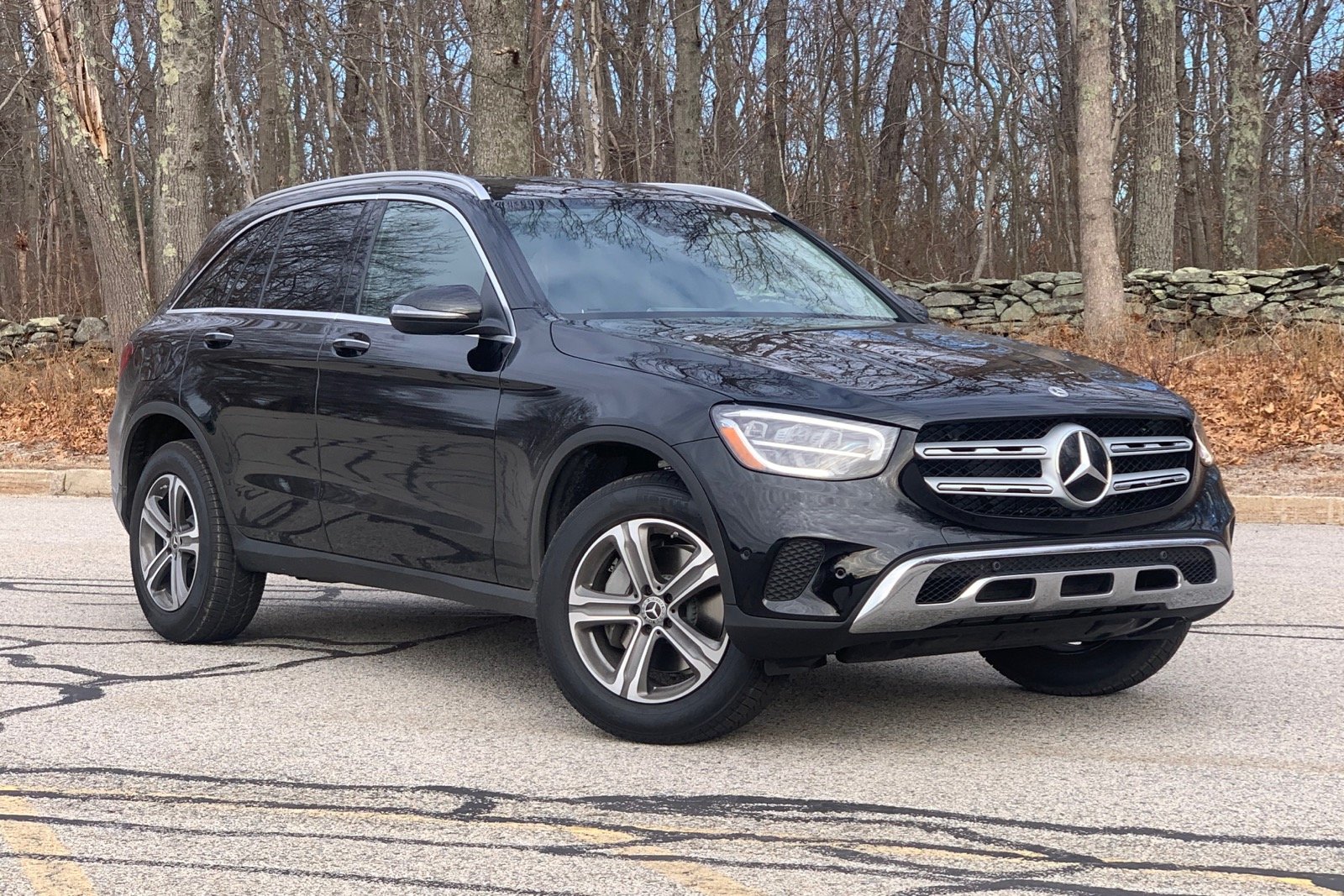 The modern compact luxury SUV market is an embarrassment of riches. Shoppers have more options than ever before, and all of them are terrific vehicles. There’s the BMW X3, Audi Q5, Volvo XC60, Acura RDX, Alfa Romeo Stelvio, and even the newcomer Lincoln Corsair. Not to be left out of this dizzying list is one of the segment’s most popular options, the 2021 Mercedes-Benz GLC.

While the X3 arguably kicked off the small luxury SUV craze, the bar was raised with the GLC’s predecessor, the GLK. But even the GLK felt like a stopgap compared to a fully realized vehicle like the GLC. It encapsulates everything that buyers are looking for in a compact luxury SUV—an upscale cabin, cutting-edge infotainment and safety technology, and driving dynamics that are equal parts athletic and comfortable. Many vehicles in the aforementioned list have some or all of these things, but few combine them all as elegantly as the GLC. Mercedes-Benz happily boasts the GLC is its best-seller, and with good reason. But should you count yourself among one of their customers? Read on to find out. 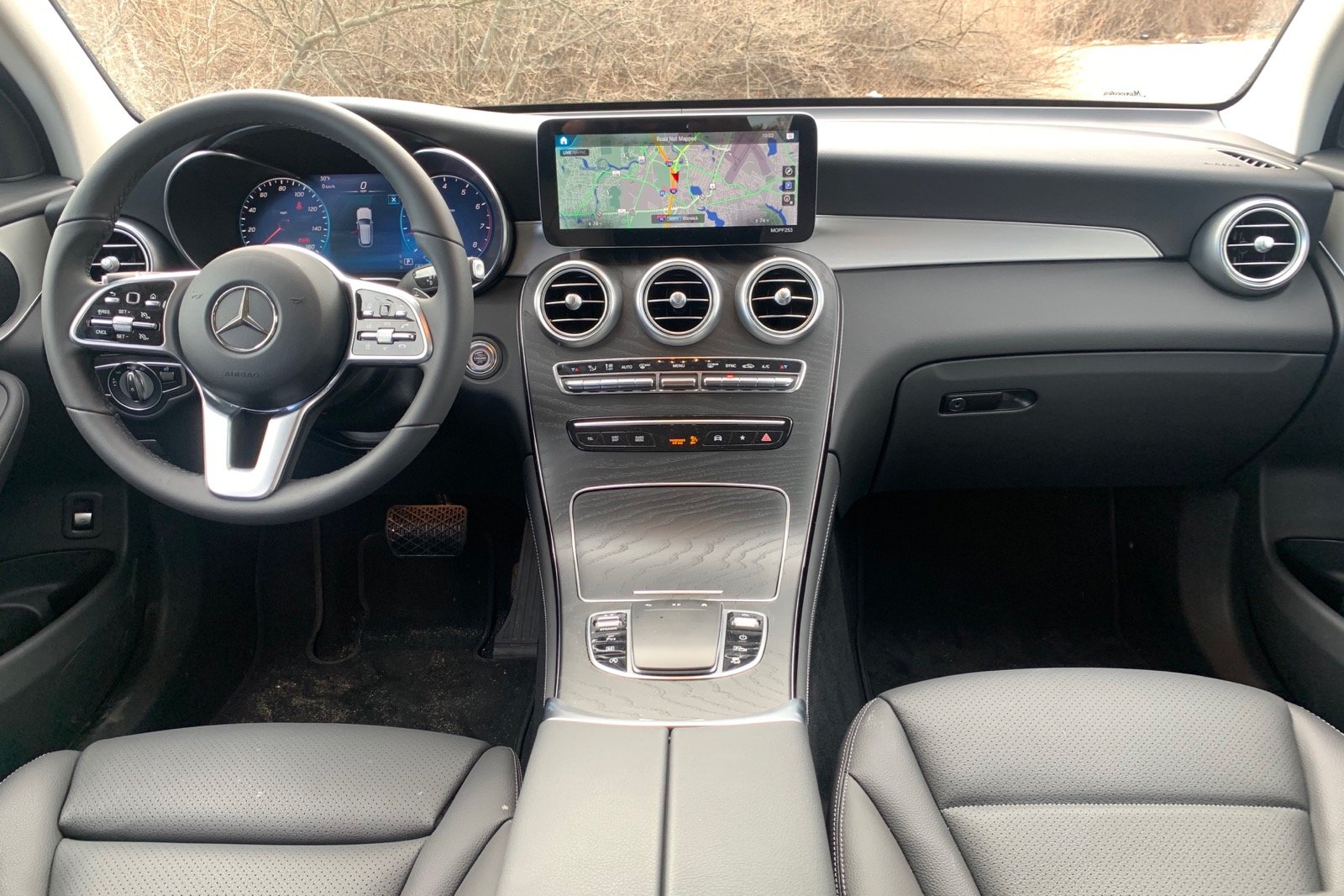 There’s another common thread among the SUVs listed above. Most of them look “angry.” Contemporary styling trends are dominated by dynamic, forward-thinking design. But there’s something to be said for a more timeless aesthetic—just ask Ralph Lauren. This is the track that Mercedes-Benz has taken for its entire portfolio of vehicles. The brand’s design language is defined by soft curves and rounded edges. It still embodies that modern aggression with the menacing LED headlights. But compared to a Lexus NX, I’m not worried about getting cut by the grille. The long hood and wide grille give the GLC a dramatic stance. In fact, the front area almost presents itself like a raised C-Class or even E-Class sedan. This helps underscore the notion of an SUV with car-like characteristics.

As attractive as the exterior is, the GLC’s cabin is an automotive work of art. The soft lines and curves are carried into the flowing dash. Even the floating center touchscreen has rounded edges. As a brand, Mercedes is moving towards larger screens and a more minimalist approach. But I’m going to miss this era in Mercedes-Benz cabin design. The German luxury brand proved automotive packaging could elevate to an art form. Simply put, GLC’s interior aesthetic is the bar by which other compact luxury SUV cabins are measured.

The GLC is offered in the conventional SUV format and the crossover “coupe” body style. This is liberal use of the term “coupe,” because a coupe is supposed to have two doors…and be a car. But the state of the auto industry is such that the term can be used to describe an SUV with less cargo space than its conventionally-shaped counterpart. At least Audi and BMW have the decency to call their “SUV-coupes” something else. Rant aside, the GLC Coupe does have a sharp look to it, even if it comes at the cost of usable space.

Our test GLC 300 featured the $1,295 Multimedia Package. It adds navigation with live traffic updates and augmented video for turn-by-turn navigation. It also came equipped with the Premium Package. It costs $635 and includes SiriusXM satellite radio, illuminated door sills, and ambient lighting with 64 colors from which to choose. Other available options on the GLC 300 include wireless device charging, genuine leather upholstery, Burmester premium sound system, heated rear seats, and ventilated front seats. You can also get a panoramic moonroof, head-up display, and three-zone climate control.

Moving up to the AMG GLC43 adds a more potent powertrain, as well as 20-inch wheels, adaptive air suspension, sport seats, and a host of other performance upgrades.

The range-topping AMG GLC63 has the same upgrades as the 43, but it adds a limited-slip differential, surround-view parking camera, navigation, and the Burmester sound system. 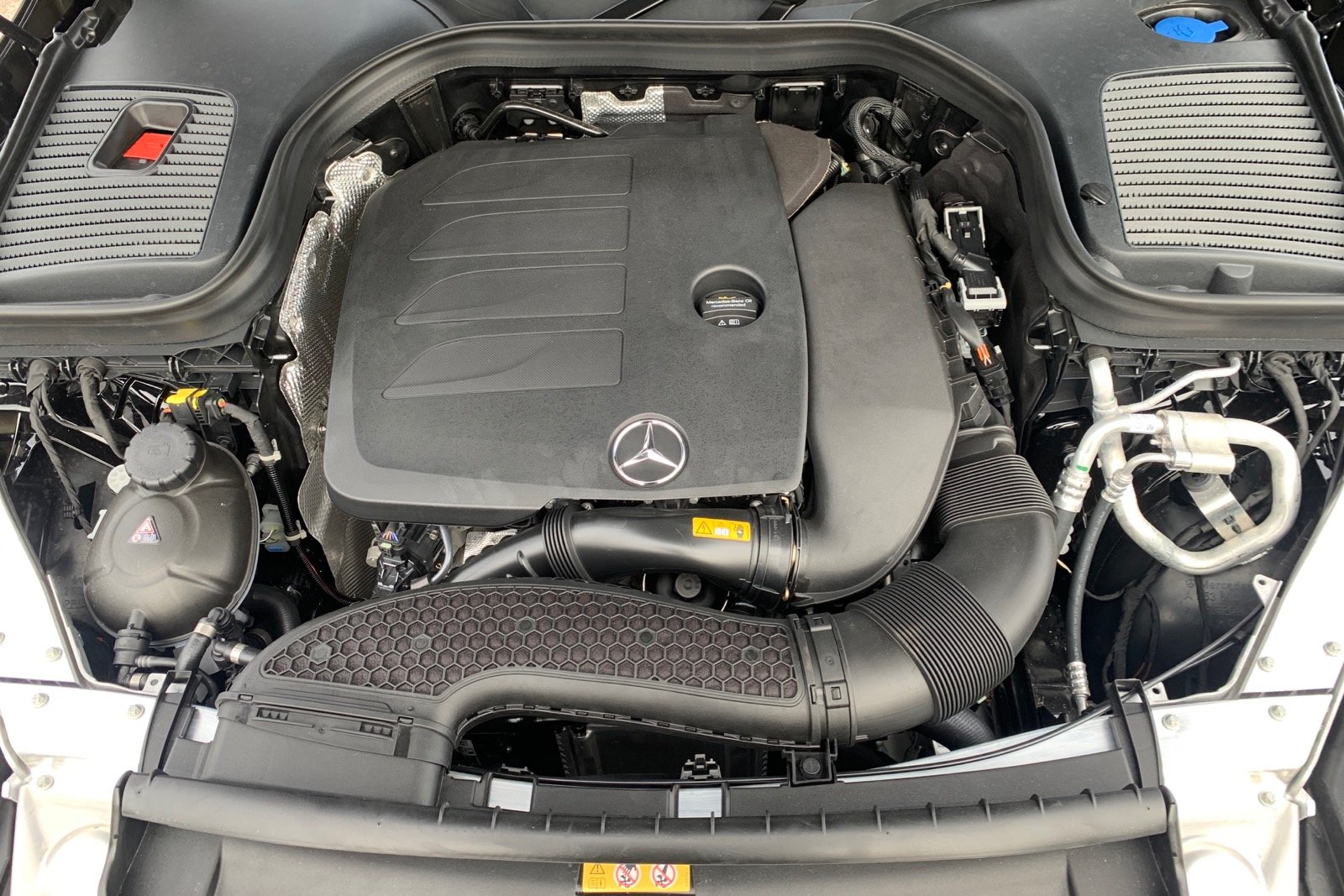 The GLC 300 comes standard with a 2.0-liter turbocharged four-cylinder engine that makes 255 horsepower and 273 pound-feet of torque. Power is routed through a nine-speed automatic transmission to the rear wheels or available 4MATIC all-wheel drive (AWD).

The GLC comes with steering-wheel-mounted paddle shifters, as well as Dynamic Select with Eco, Comfort, Sport, and Sport+ drive modes. Despite having all these performance-enhancing features at our disposal, we seldom felt the need to take advantage of them. Even in the default Comfort mode, the four-cylinder turbo makes plenty of power. It’s not overly sporty, but you’re never wanting for more than what it has on tap. There is the occasional bit of lag as it pulls away from a stop (and we were constantly deactivating the auto stop-start), but it’s a generally responsive powertrain. The steering feel is soft, but not so light that it feels disconnected. Turn-in is precise and higher-speed turns are executed with confidence. The GLC strikes the perfect balance of refined and responsive.

If this balance isn’t to your liking and you’d prefer something with a bit more power, check out the AMG GLA 45. It comes equipped with a twin-turbocharged V6 sending 385 horsepower to all four wheels. But the real performance comes when you step up to the AMG GLA 63. It’s available in two flavors—63 and 63 S. The 63’s twin-turbo V8 makes 469 hp, while the 63 S has the same engine, but is tuned to put out 503 hp. These vehicles are monsters, accelerating and cornering on a level that’s equal to that of sports cars from only a few years ago. 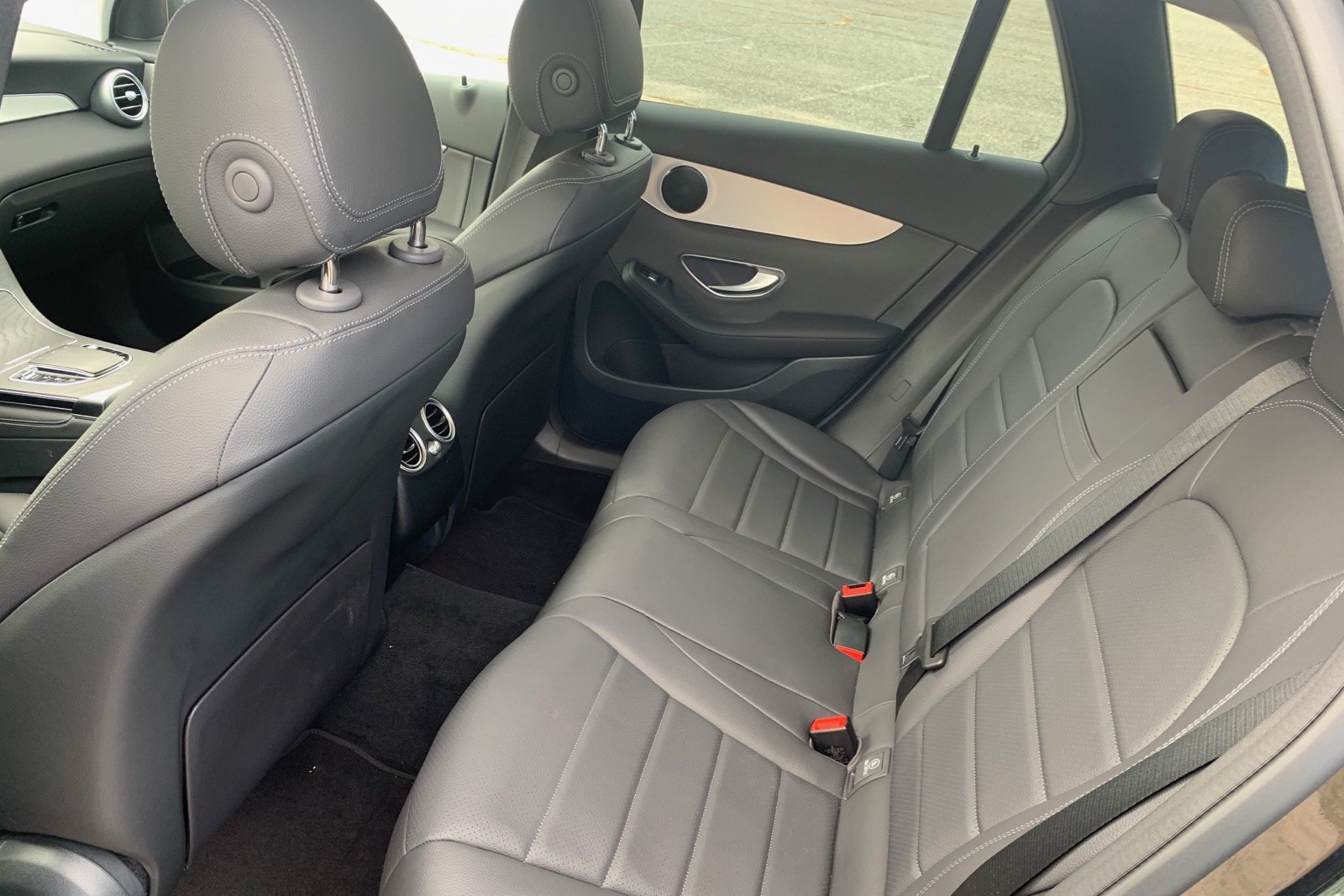 The driver has plenty of options for storing items and gear. The GLC has a decently sized center console, although the “barn-door” opening can be more of a pain than a simple lid. The driver and front-passenger doors have very deep pockets that can hold multiple water bottles. The center cupholders can hide away thanks to a retractable wood panel. In all, the GLC makes very good use of its interior space.

The GLC provides decent rear-seat space as well. There’s no need to slide the rear seats forward to enjoy adequate legroom. There’s plenty of headroom in the SUV, but the Coupe’s low roofline cuts in on headroom. If you haven’t guessed, we’d recommend the SUV over the Coupe in most scenarios. 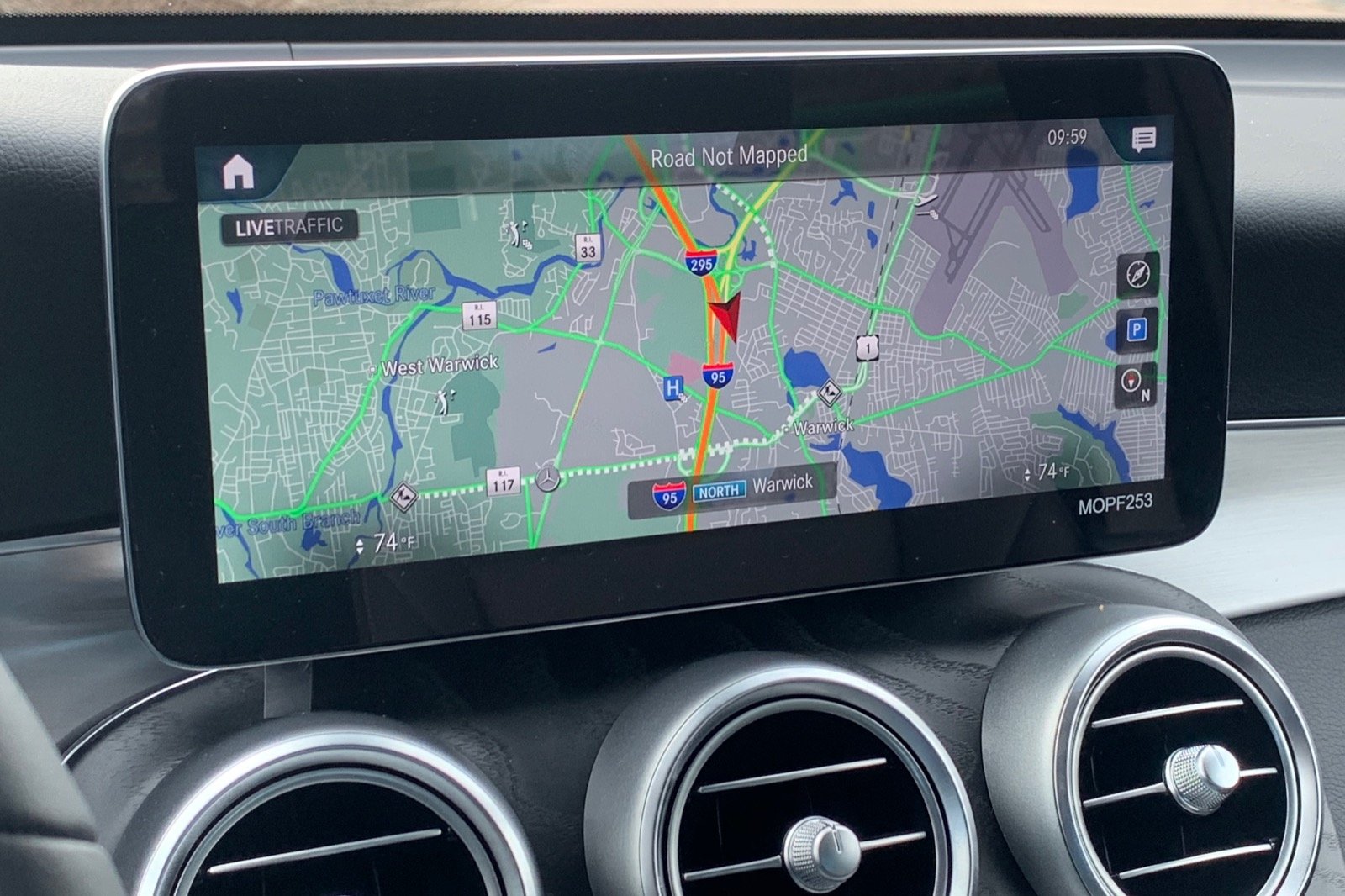 The GLC comes equipped with the Mercedes-Benz User Experience, or “MBUX.” This infotainment system uses the 10.25-inch center touchscreen, center console touch controller, and an advanced voice-control system that can understand complex commands. The screen and touch controller are an evolution of the previous Mercedes COMAND system, but this is far more intuitive. For starters, you get the option of both the touch controller and the touchscreen. Both work with a similar flow-through of the various menus.

The steering wheel features two small touch-sensitive pads. The one on the left side of the wheel allows you to customize the digital instrument panel. The one on the right allows you to navigate the main infotainment screen. There’s certainly a learning curve to all this, but there’s also a logic to it. Once acclimated, it’s all quite seamless.

The infotainment also includes Apple CarPlay and Android Auto, which present well on the touchscreen. The only problem is if you jump between the GLC’s radio and your smartphone’s music apps. When doing this, you have to hit the home button (which is a helpful feature) and swipe over to the radio. There may be quicker shortcuts, but they were not readily apparent. In all, this is a great system, and you may not encounter the aforementioned issue. 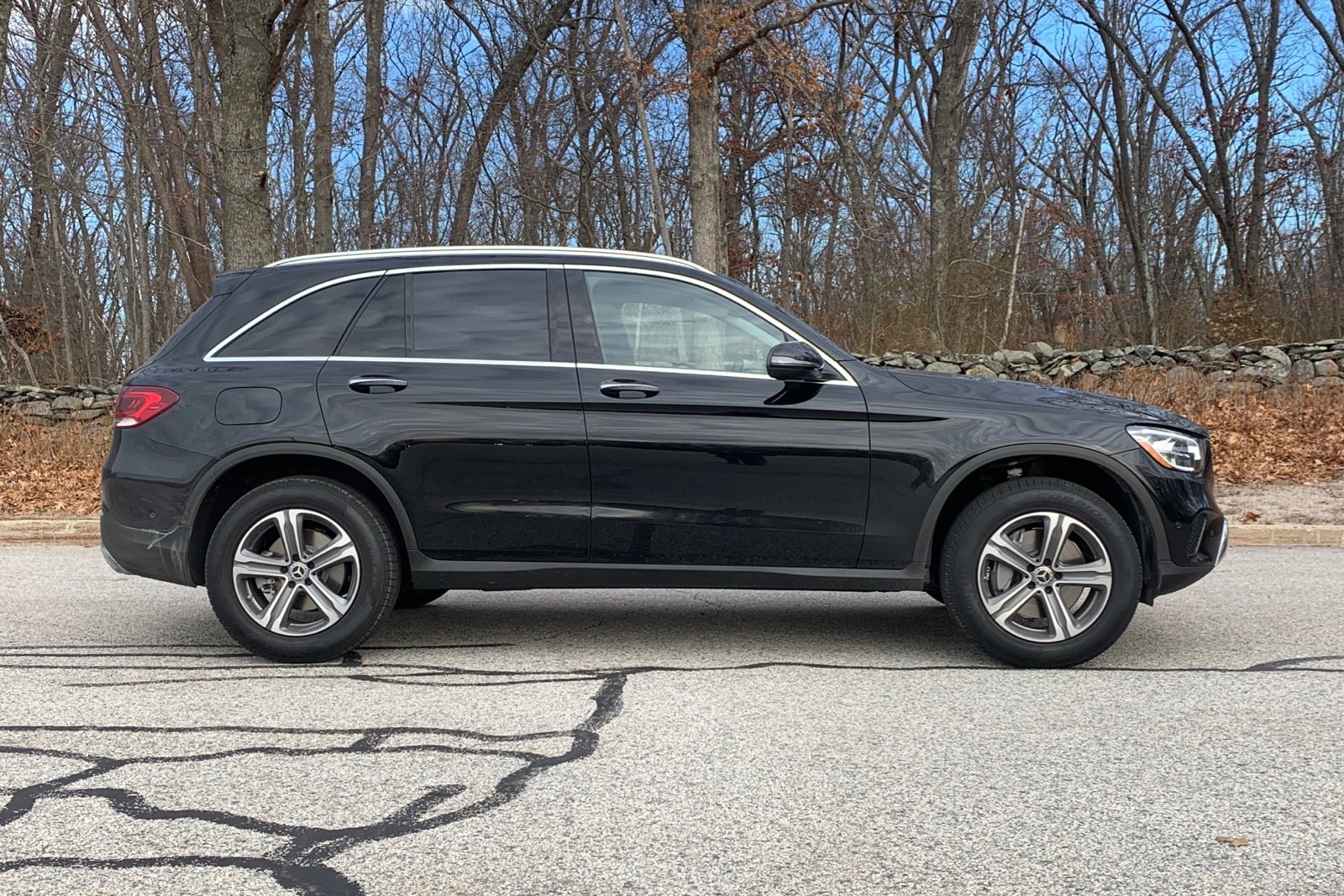 We found the parking and proximity sensors to be overly sensitive. When queuing up at a multi-lane intersection with a red light, the system was being triggered by vehicles in the lane to the left or to the right. These false positives were overly distracting, but can be deactivated if desired.

Optional safety features include a 360-degree parking camera, dynamic cruise control, automatic high beams, and lane departure warning. Some of these features are standard on rivals within the class. 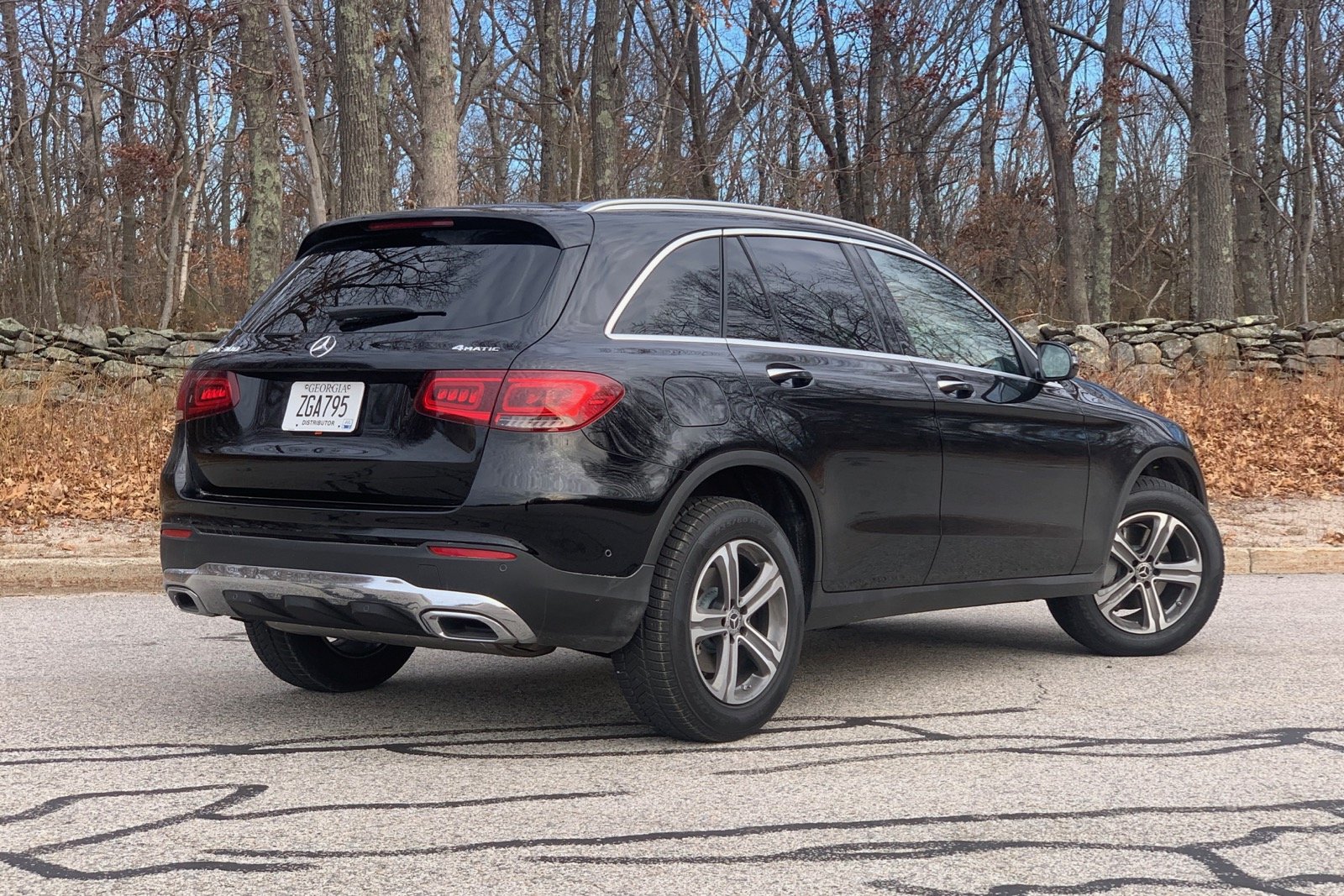 If you’re considering the more powerful AMG GLC43, fuel economy drops to 18 mpg city, 24 highway, 20 combined. Fuel economy with the range-topping AMG GLC63 falls to 15 mpg city, 22 highway, 17 combined. There was previously a plug-in hybrid model, which is no longer available and has better fuel economy than all of these options.

As mentioned, there are certainly less expensive options than the GLC. Perhaps with the exception of the Volvo XC60, it’s hard to beat the GLC on interior quality. And since that’s where you spend most of your time, it’s a bit of a weighted win for the GLC. And yet, even if the cabin was not a standout, the GLC would still have a ton going for it. The GLC boasts an attractive exterior, terrific technology, and driving dynamics that combine the best of agility and refinement. In some ways, the BMW X3 has the advantage, but if comfort and aesthetic are higher priorities than performance and cargo space, the GLC is absolutely worth the price of admission.

What's your take on the 2021 Mercedes-Benz GLC-Class?

Have you driven a 2021 Mercedes-Benz GLC-Class?
Rank This Car

Enter your zip to see incentives for a new GLC-Class in your area.

What is the cost of transporting a vehicle?