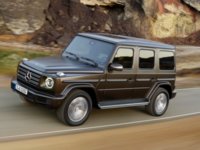 Looking for a New Mercedes-Benz G-Class in your area?

The G-Wagen continues its rugged reign over overlanding and off-roading. 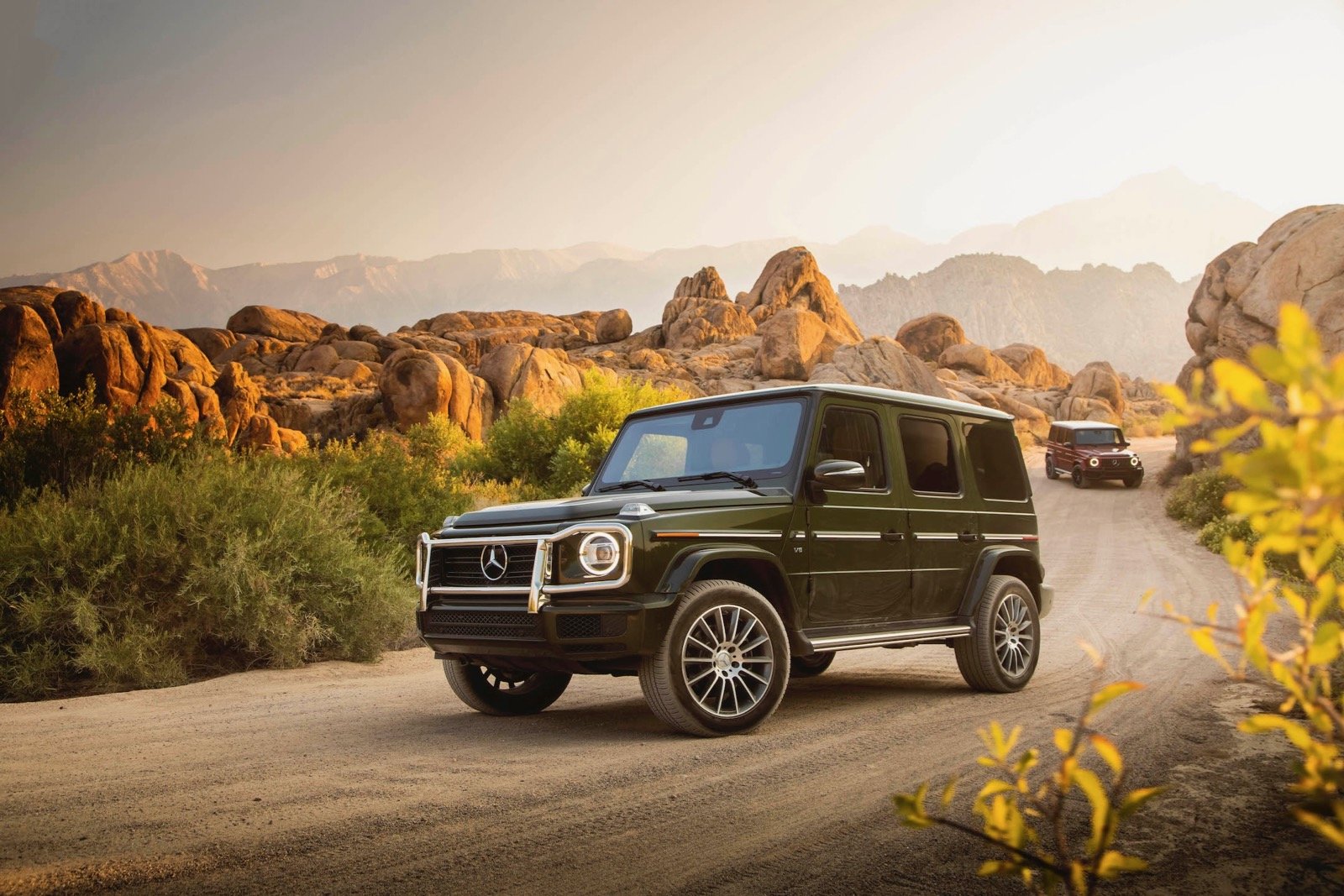 The 2021 Mercedes-Benz G550 is a five-passenger luxury body-on-frame SUV. Over 40 years since its debut, the Mercedes-Benz G-Class has retained its blocky, utilitarian exterior shape while evolving with a luxury interior and sophisticated powertrain, mechanicals, and technological prowess. Pricing for the G550 starts at $131,750. 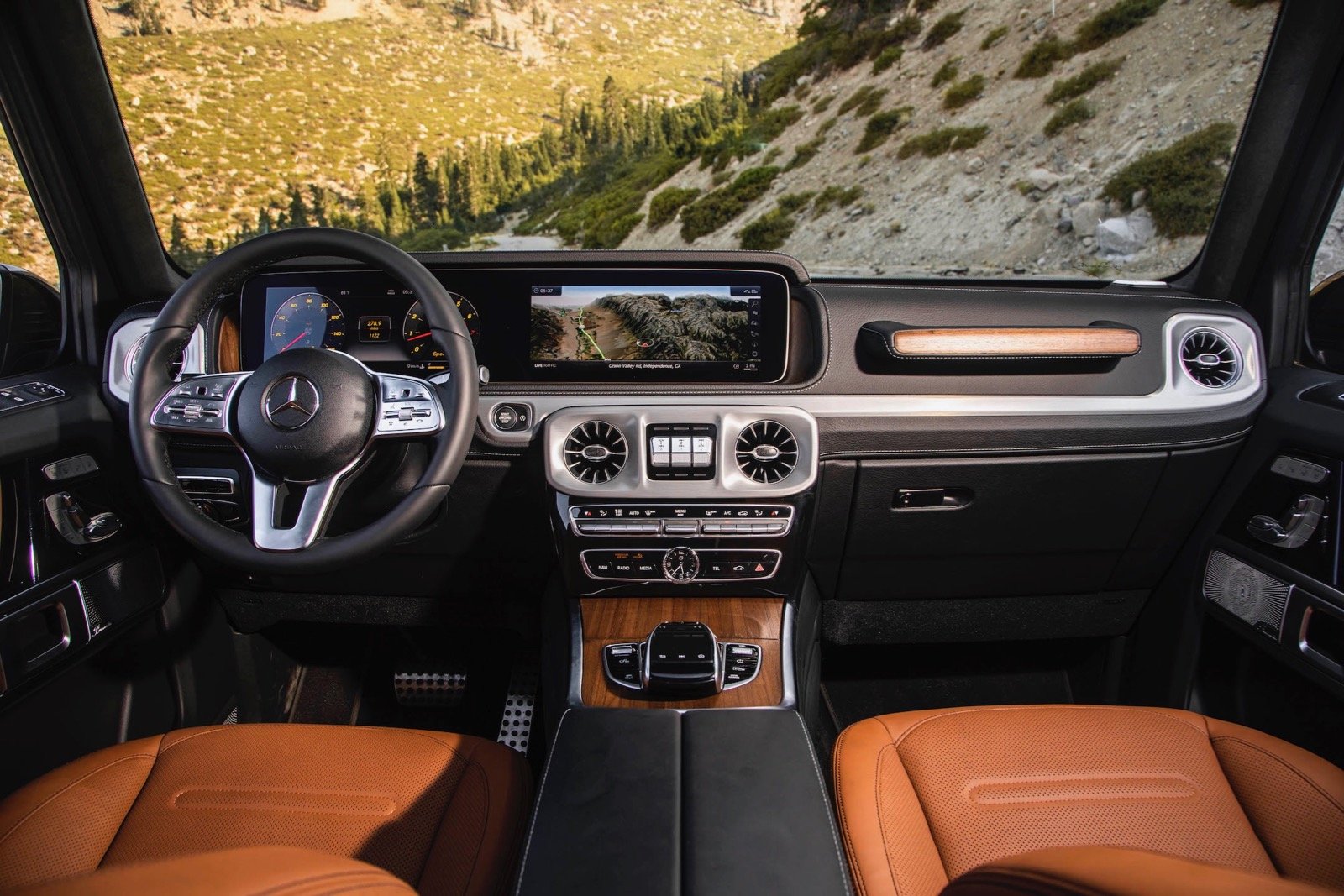 The Mercedes-Benz G-Class, Geländewagen or “G-Wagen,” debuted as a 1979 model designated W460. The updated second-generation vehicle (W463) launched in 1991, while a parallel military/commercial version (W461) debuted shortly after. The G-Class was first officially marketed in the United States starting with the 2002 model year, though gray market models had been trickling in for years. A second-generation W463 was introduced at the 2018 North American International Auto Show in Detroit for the 2019 model year—the G-Class’ first major redesign since 1979.

For the 2021 model year in the U.S., two models of G-Class are available: the Mercedes-Benz G550 (starting at $131,750) and the Mercedes-AMG G63 (starting at $156,450). With options, packages, and extras, the sky is the limit for the G-Wagen, thanks in part to the G Manufaktur Program, which allows for extensive interior and exterior customization, with over one million possible combinations. Each G-Class vehicle is hand-built in Graz, Austria.

You can be excused for believing the G-Class designers only brought their straight edges to work on the day they drew up this boxy SUV. Its body lines are very straight, and it could be described as a classic two-box design. The rugged look is part of the G-Class’ appeal. It’s a retro exterior unlike any other vehicle in the current Mercedes-Benz lineup.

Inside, a tasteful design scheme prevails. A 12.3-inch widescreen infotainment screen lives at the top of the center stack, sharing a housing with a matching 12.3-inch virtual instrument panel. You can coordinate the colors on your instrument panel with the multicolor ambient cabin lighting to create an atmosphere to fit your mood.

While it was initially conceived as a military transport, the G-Class has been adopted by the glitterati as a status symbol. It’s not out of the question to see a Gelandewagen in a bold custom color, bedazzled with Swarovski crystals, and wearing oversized wheels with low-profile summer tires. But don’t be fooled—this is still a rugged, capable, go-anywhere machine. 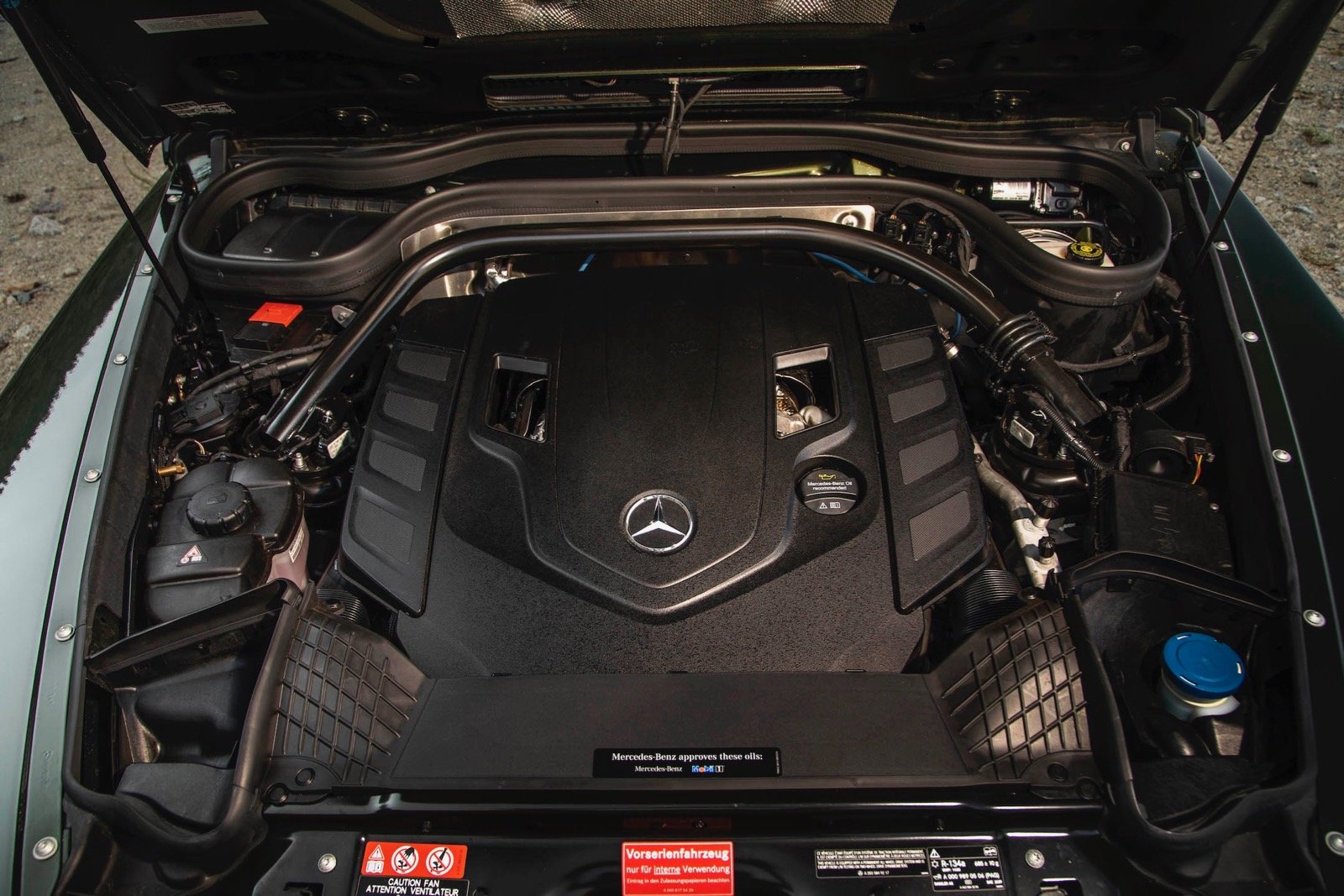 Looking at the G550, it isn’t hard to believe the SUV has a curb weight of 5,551 pounds. What is tougher to believe is how quick, nimble, and capable this big beast can be. Under its hood lurks a twin-turbocharged 4.0-liter V8 gasoline engine tuned to produce 416 horsepower and 450 pound-feet of torque. G550 uses a nine-speed automatic transmission with steering-wheel-mounted paddle shifters and permanent four-wheel drive (4WD). Dynamic Select driving programs, including “G-mode” for assertive off-roading, help dial in the throttle, transmission, and steering feel. The G550 is capable of sprinting from a standstill to 60 mph in 5.6 seconds, which is very quick for any vehicle, let alone an SUV.

Standard 19-inch alloy wheels are backed up by big brakes (13.9 inches front/13.6 inches rear), a necessity with all that mass. The G-Class has double-wishbone independent front suspension, while a rigid axle handles the rear. This combination of a sporting front but rugged rear suspension is supplemented by longitudinal and transverse links, coil springs, shock absorbers, and, in front, a torsion bar, giving the G550 a supple ride on pavement, with a minimum of body roll despite tall ground clearance (9.5 inches).

Adjustable suspension and damping are available options, as are three independent locking differentials (front, center, and rear). We did not take the G550 off-road—the $131,750 starting price was a bit intimidating—but we did explore dirt roads in addition to our normal highways, city streets, suburban drives, and back roads. The measurements, including 30.9-degree approach/29.9-degree departure/23.5-degree breakover angles, give us confidence in G550’s off-road capability, especially with big torque on tap. The G550 has a turning circle of 44.6 feet, quite compact considering the SUV’s size.

If the G550 seems a little too tame for you, there’s always the Mercedes-AMG version, the G63. It takes the G-Wagen formula and amplifies it. The twin-turbo V8 is tuned up to 577 hp and 627 lb-ft of torque, good enough to rocket from zero to 60 mph in 4.5 seconds. The exterior gets more jewelry, and the interior finishes are cranked up a few notches, with even more options available for over-the-top luxury and opulence.

Driving a G-Class is not for the shy, as there’s nowhere to hide in this big SUV. Don’t be surprised if you gather a crowd at the gas station—where you will be frequently, thanks to EPA fuel economy ratings of 13 mpg city/19 mpg highway/18 mpg combined in the G550, 13/16/14 in the G 63.

If you don’t want to be accused of being a poser, consider exploring the G-Class Experience (G-Class-Experience.com), a Mercedes-Benz driving program in Graz, Austria (starting at 1,780 Euros) where owners and enthusiasts can learn about the capabilities and limits of the G-Wagen in its natural element. 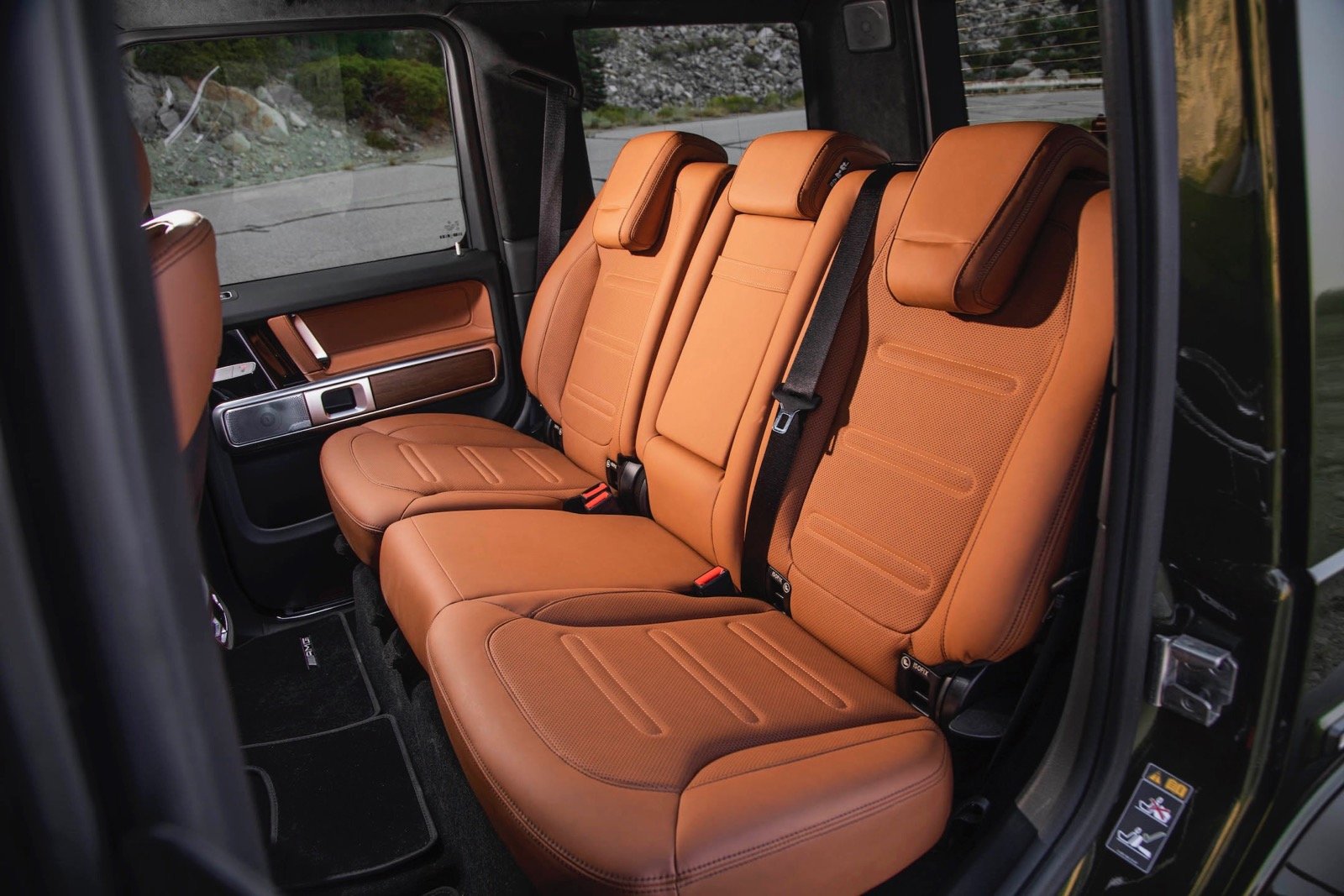 For as luxurious and performance-oriented as the G550 is, it is also surprisingly useful. Cargo capacity behind the third row is 38.1 cubic feet; fold the second row flat, and you can handle up to 68.6 cubic feet of cargo. G550 has a payload capacity of just over 1,000 pounds and can tow up to 7,700 pounds—a benefit of its body-on-frame construction.

The front cabin of the G550 is very roomy, with big comfortable seats and a dashboard that never crowds the driver or front-seat passenger. Storage is everywhere—in the dash, in the door pockets, under the armrest—and well-designed. The tall roofline creates great headroom in both the front and second rows, giving the cabin an airy, spacious feel. The standard sunroof overhead helps reinforce this feeling even more. Three adults can sit comfortably in the wide second row, with ample legroom and a reclining seatback. The second row can be folded flat in a 60/40 split. Each rear door has a bottle pocket, big enough for a 1-liter water bottle.

Sometimes the luxury part of the G550’s personality gets in the way of simple functionality. For instance, heated front and rear seats are standard, but ventilated front seats are only available as part of expensive packages that also force you to accept active multi-contour front seats with massage—not necessarily a complication that you want to add to your G-Wagen. Keyless-Start (pushbutton start) and Keyless-Go (unlocking and locking the car door without touching the key fob) are standard on both G550 and AMG G63, but there’s no option for Hands-Free Access (to open the tailgate by waving a foot beneath the bumper), a feature available even on the entry-level Mercedes-Benz GLA-Class.

G550 wears its spare tire proudly on the outside of its tailgate, a convenient feature that has also become a styling cue. 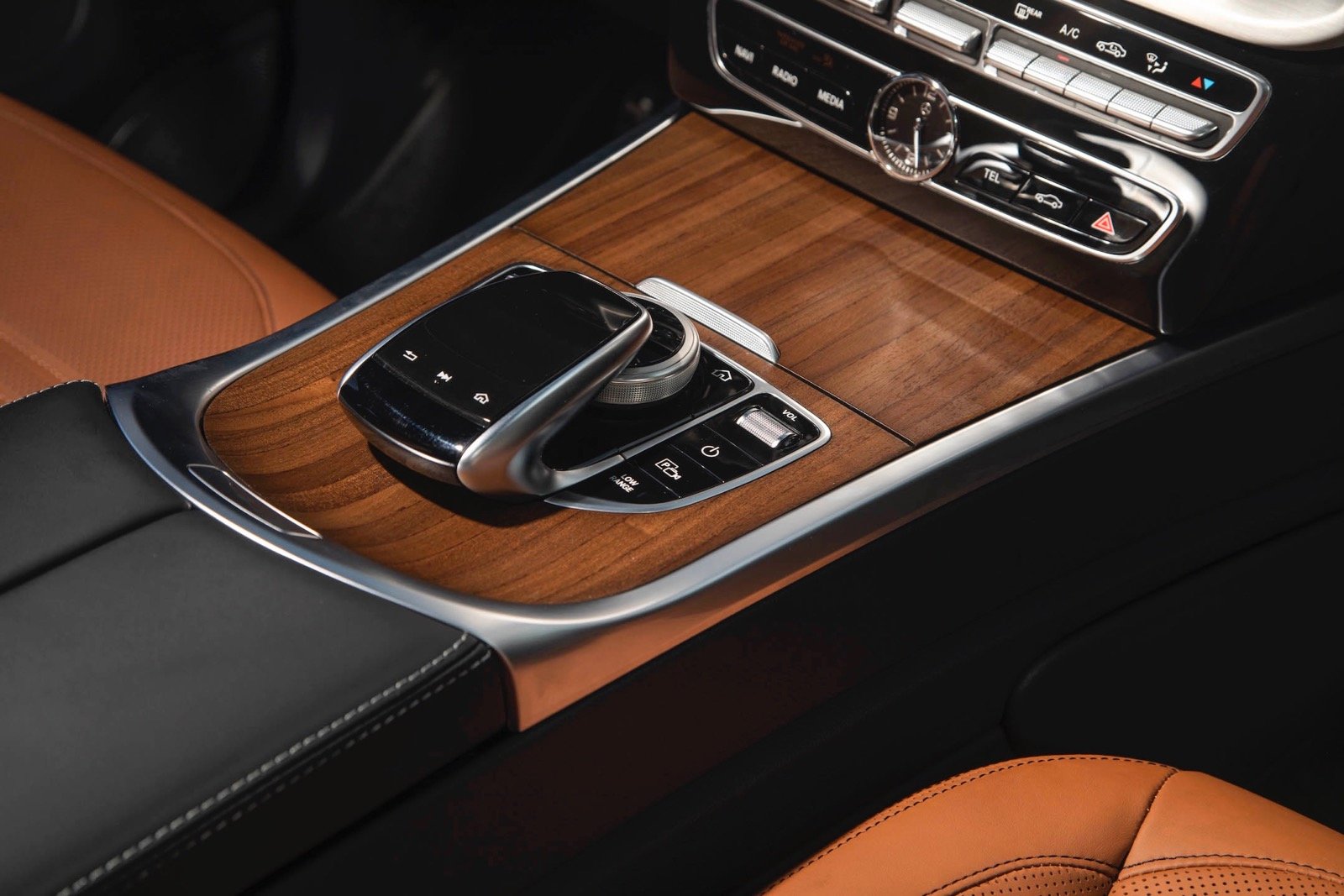 By far the most impressive tech features on the G550 are right in front of the driver—the available twin 12.3-inch HD screens that handle instrument panel and infotainment duty. Not only do these screens present information in a clear, easy-to-scan, format for the driver, they are also customizable for layout, content, and even color, which you can coordinate with the ambient lighting in the cabin for a totally immersive experience. This could become an obsession for some, finding the right look for a particular ride, time of day, or destination. Combine these visual aspects with a concert from the G550’s Burmester Surround Sound system, and you’ve created your own 360-degree environment within the SUV.

The infotainment touchscreen is running the latest version of Mercedes-Benz’s COMAND system. Unique Touch Control buttons on the steering wheel allow for vertical and horizontal swiping motions to control content on the instrument panel, like little touchpads. Once you figure them out, the Touch Control buttons offer much more function than conventional scroll wheels and arrows.

A rear-seat entertainment system is available, and the G550 comes with three USB and two 12-volt outlets. WiFi is standard with a one-month trial ($20 per month thereafter), but there’s no provision for wireless device charging onboard. Bluetooth hands-free and streaming audio, Apple CarPlay, and Android Auto are standard. Mercedes me connect services and assistance services are included for three years. 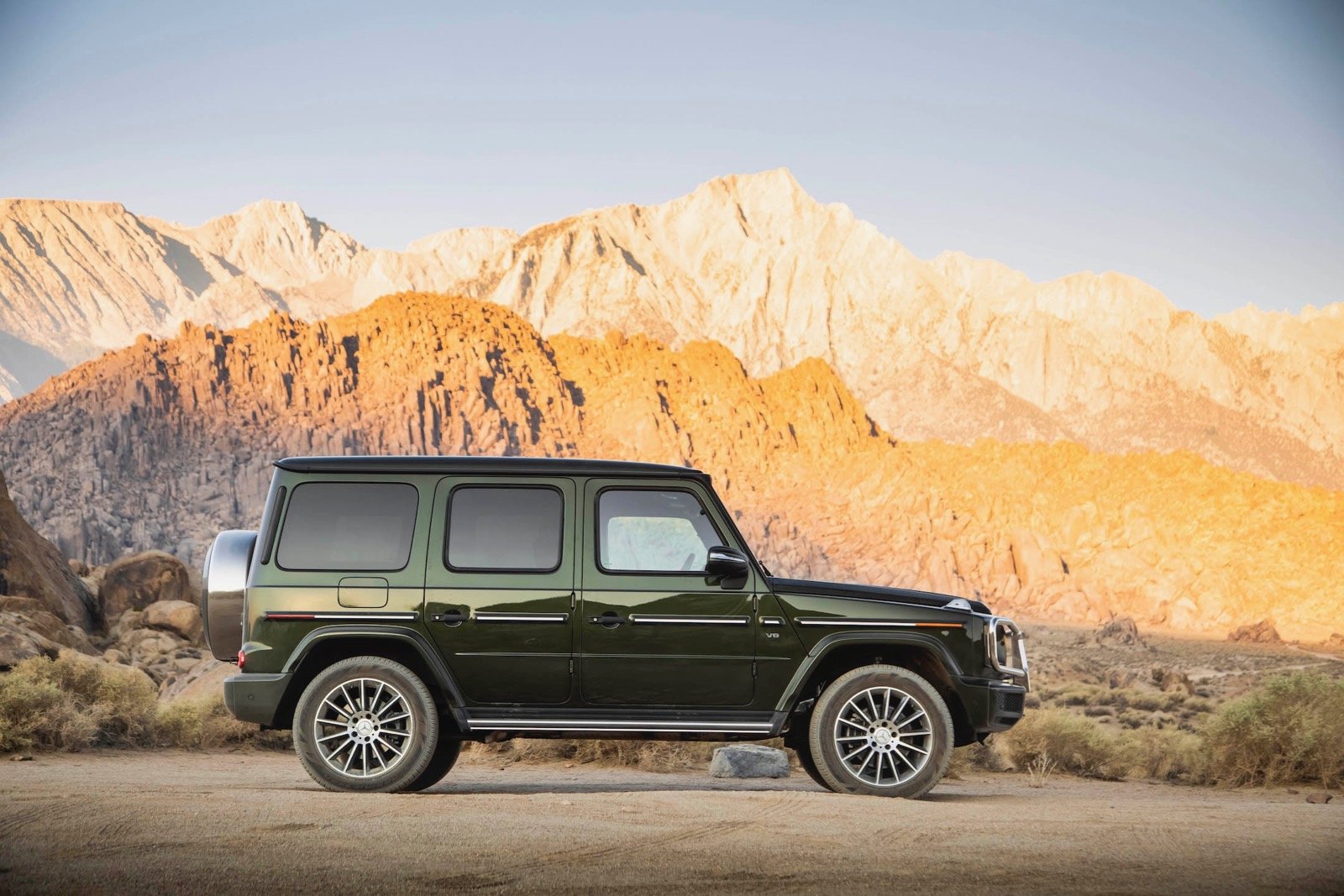 Many drivers will tell you they feel safer in a big vehicle than they do in a small one, and from a pure physics perspective, there’s a lot of truth to that. The G550’s rugged body-on-frame construction and mass give it safety advantages in some crashes, especially with smaller vehicles. Of course, the G550’s size and weight can create serious consequences for pedestrians, bicyclists, and other unfortunate victims, so driving it carries great responsibility.

Thankfully, many Mercedes-Benz safety systems have been included as standard equipment on the G550, including a rearview camera, Pre-Safe, traffic-sign assist, attention assist, active lane-keeping assist, active brake assist, active brake assist, active distance assist distronic (adaptive cruise control), active parking assist, blind-spot monitoring, and more. Active lane-keeping assist on both the G550 and G63 proved to be an alarming distraction, as the system feels like it both brakes and steers the vehicle away from the lane line rather abruptly when it detects drifting. This intervention might help prevent an unintended incursion into oncoming traffic, but it could also induce unintended consequences in the opposite direction, and should be engaged only with a full understanding of how it works.

The 2021 Mercedes-Benz G-Class has not been rated for crash-worthiness or safety by the Insurance Institute for Highway Safety (IIHS) nor the National Highway Traffic Safety Administration (NHTSA). 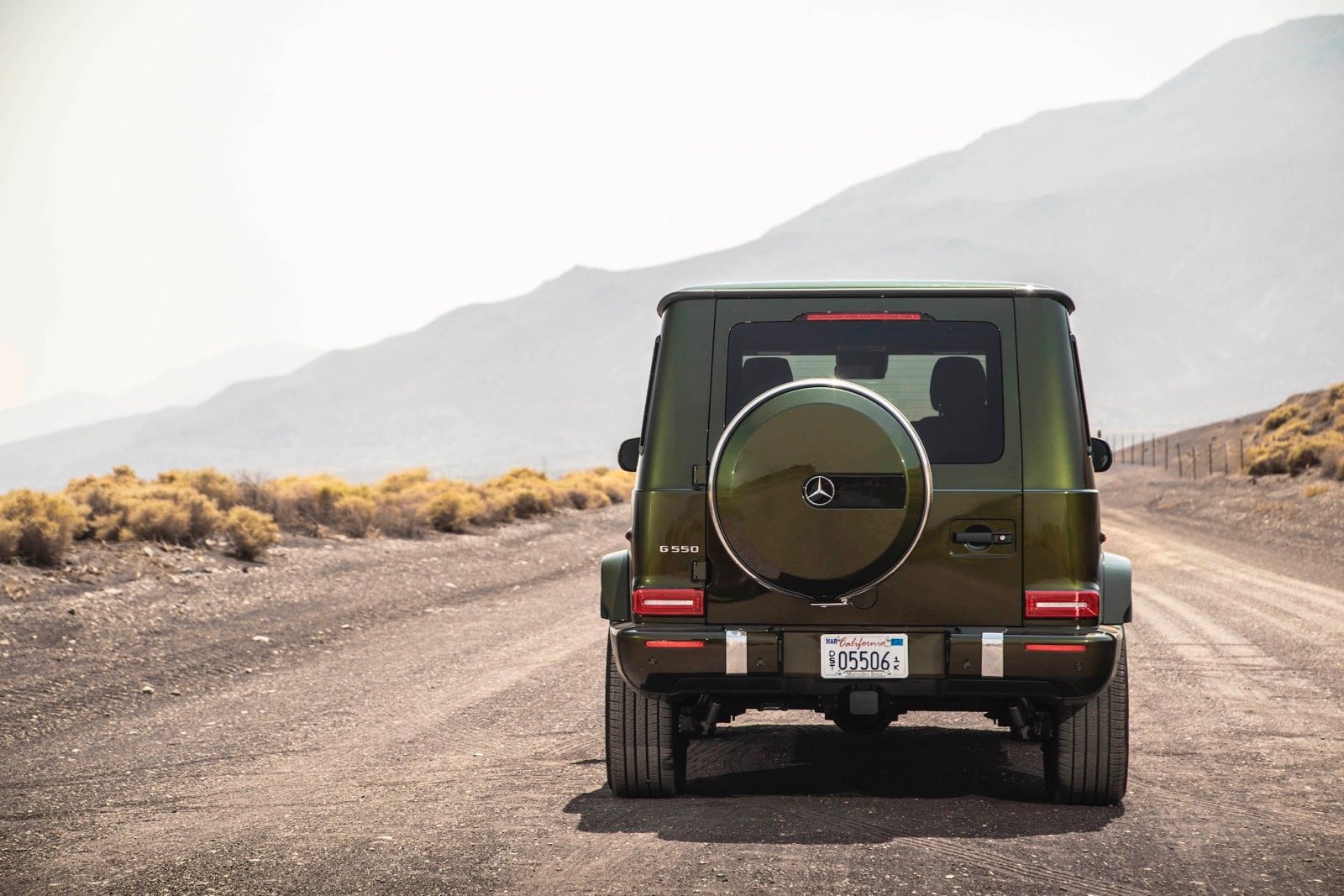 This is not a casual purchase for the vast majority of shoppers. That said, if you are drawn to a 2021 Mercedes-Benz G550, you have excellent taste and you will not be disappointed with your purchase. This is a very capable, impressive, fun-to-drive, vehicle unlike any other on the market.

What's your take on the 2021 Mercedes-Benz G-Class?

Have you driven a 2021 Mercedes-Benz G-Class?
Rank This Car

Enter your zip to see incentives for a new G-Class in your area.

Why Is My Car Value Less Than Others?

My car value is valued less than another car that has less upgrades than mine. The other car also has more miles on it than mine. Is there a reason my car is listed overpriced and theirs isn't?