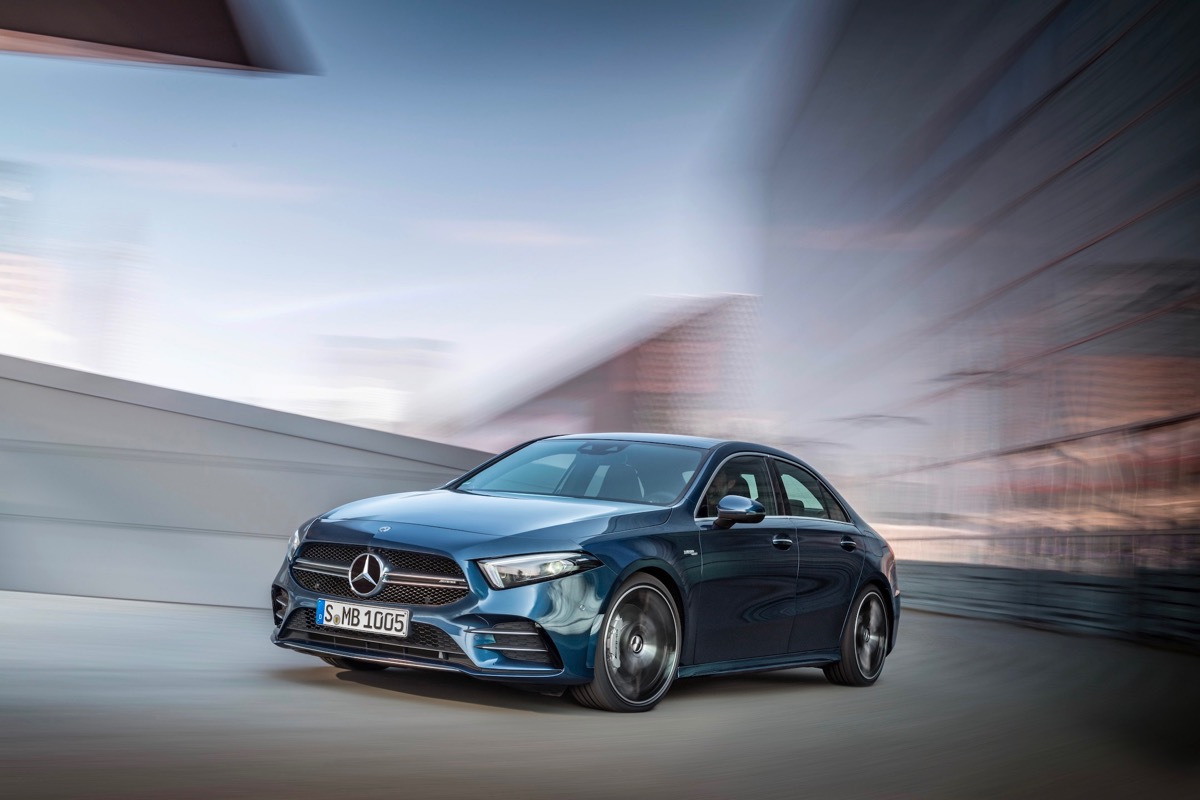 Looking for a New Mercedes-Benz A-Class in your area?

If you've ever wished for Mercedes-like quality in a subcompact performance sedan, it's finally here—and it's from Mercedes. 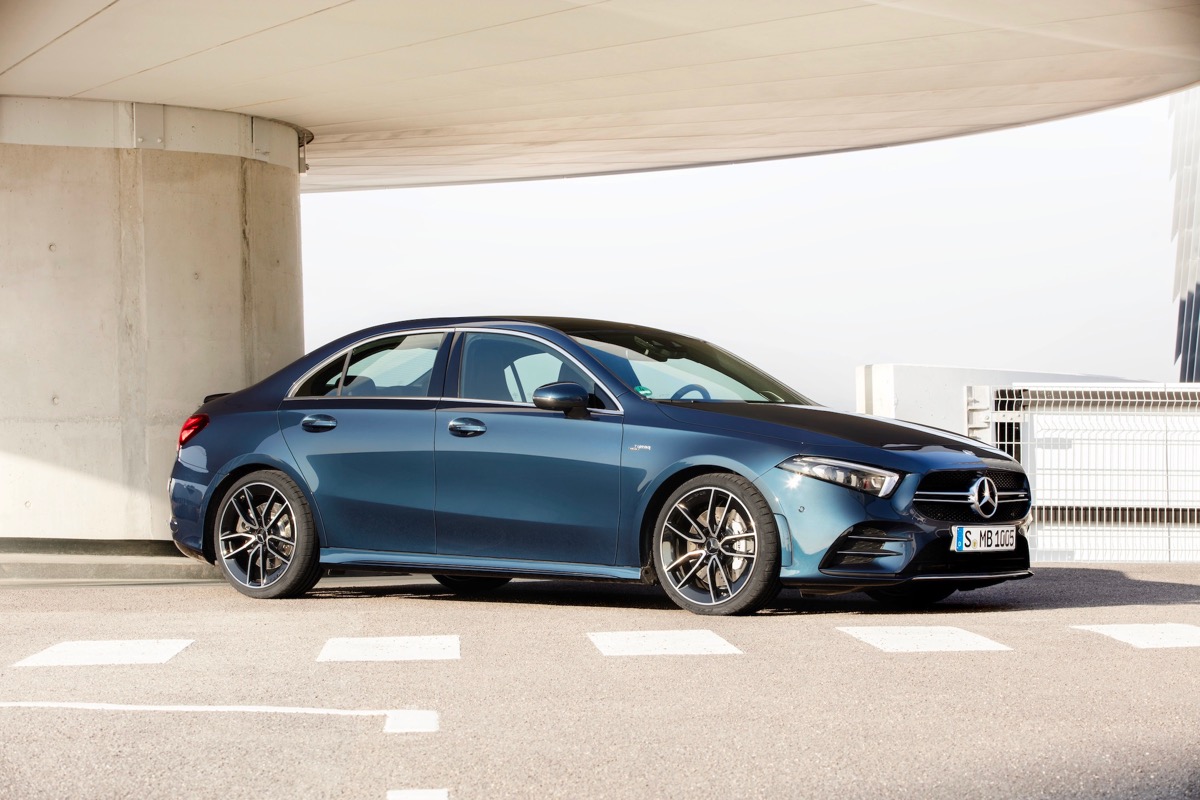 The 2021 Mercedes-AMG A 35 4Matic sedan is a compact four-door with all-wheel drive (AWD), joined in the Mercedes-Benz A-Class lineup by the front-wheel-drive (FWD) A 220 sedan and AWD A 220 4Matic sedan. As the performance version of the A-Class, the A 35 packs a more potent engine, a sport suspension, the latest technology, and tons of standard features, along with a Mercedes-estimated 0-60-mph time of 4.6 seconds—2.5 seconds quicker than the other A-Class models. New for the 2020 model year, the A 35 continues into 2021 with incremental upgrades. 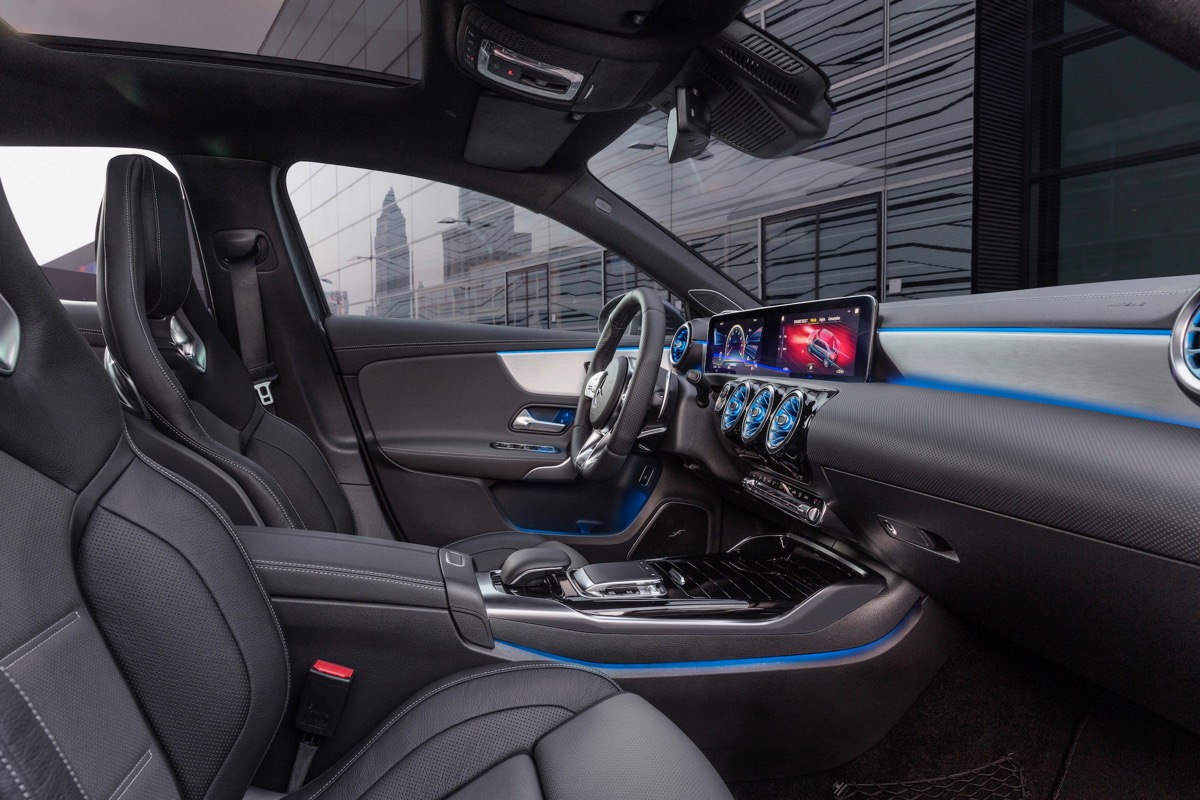 The AMG division of Mercedes-Benz started as an independent tuning company but was eventually purchased by Mercedes and brought in-house to produce performance versions of its lineup. AMG's success has spawned the launch and expansion of performance divisions in Mercedes' competitors, like BMW's M, Audi's S, Cadillac's V, Mazdaspeed, Lexus F-Sport, Hyundai N-line, and others. More than just a badge or accessories package, the AMG treatment brings the sedan shell to the AMG workshop, where an engine is hand-built. AMG vehicles wear interior pieces, body kits, performance suspension parts, and other accessories. The result is a car that goes faster, handles better, looks cooler, and is better-equipped than the base Mercedes-Benz version.

Car design all comes back to proportion and, like most of the current Mercedes lineup, the A 35 sedan has outstanding proportions. In profile view, the car looks like it's traveling downhill, with a low hood and taller deck lid (with a tasteful spoiler lip). Both front and rear overhangs are short, and the wheel arches hug the tires wrapped, on the standard 18-inch alloy wheels.

Designers claim elegance comes from a long front-axle-to-dashboard distance, and the A-Class sedan shows why. The A-pillar sweeps back, and the roof swoops over the cabin, eschewing the current "coupe-like" profile craze in favor of more conventional sedan styling, giving the car a very planted look over the rear wheels. Big LED lighting front and rear works beautifully to add serious purpose, and a bold, oversized Mercedes-Benz star proclaims the A 35's provenance at the center of the grille, cleverly housing sensors for cruise control and other functions. The A 35 is a premium sport sedan in miniature, with a full-size attitude and stance.

Inside, the A 35 gets a similarly modern, premium environment. Two highlights include the five round HVAC outlets in the dash—one at each upper corner and three grouped at the middle of the dash in the center stack. Not only are the vents cool to look at, but they're also easy to use and highly effective at getting the proper airflow exactly where you want it. It seems like that would be the baseline for HVAC vents, yet many cars deliver a freezing airflow to the driver's knuckles. They can't spread the coolness or heat around the cabin equitably, so excellent vents feel like a premium feature in comparison.

The second highlight is the pair of 10.25-inch displays sharing a housing between the top of the center stack and instrument-panel positions. It looks like you've got a single 20.5-inch landscape screen, and manages to unclutter the dash by unifying it. Fit and finish throughout the cabin are at premium levels. Our test car had the standard MB-Tex/Dynamica seating fabric, which we're told out-wears leather upholstery over time, yet can easily be mistaken for the real thing. MB-Tex has been around forever, evolving to where spending more on leather seems like a bad use of money. 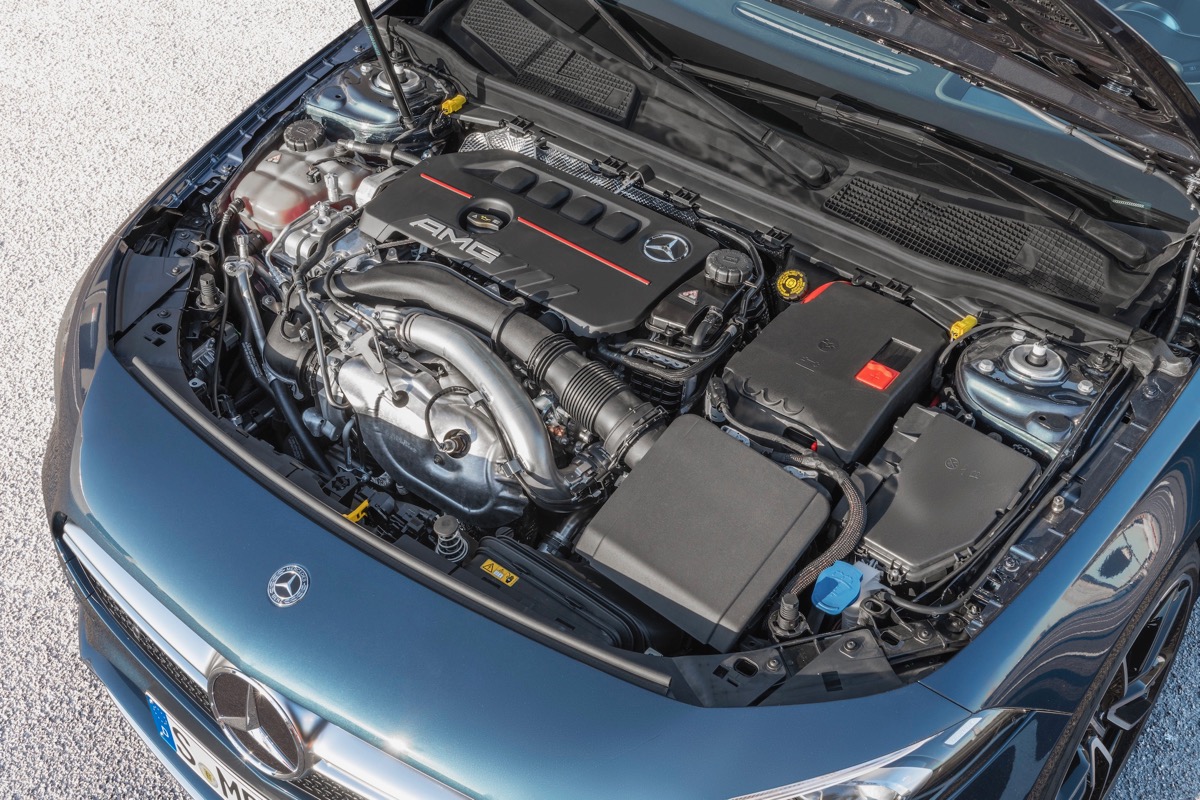 Since AMG's mission starts with performance, our expectations are always high when we get a chance to drive one of its cars. The A 35 uses an AMG-prepared 2.0-liter turbocharged four-cylinder engine tuned to produce 302 horsepower and 295 pound-feet of torque, good enough for the aforementioned 4.6-second 0-60 mph time, plus a 155-mph top speed. The non-AMG Mercedes-Benz A 220 sedan also uses a 2.0-liter turbocharged inline-four powertrain, but it only puts out 188 hp and 221 lb-ft of torque. Its 0-60-mph time is 7.1 seconds, with a top speed of 130 mph (top speeds in both sedans are electronically limited).

The numerical difference between 4.6 seconds and 7.1 seconds is 2.5 seconds, which seems like not that much time. Sitting behind the wheel, though, it's the difference between "okay" and "oh-boy!" The A 35 is genuinely fast, much faster than 302 hp promises on the surface.

All that speed must be managed, and the AMG-enhanced seven-speed dual-clutch automatic transmission does that, sending power to all four wheels as needed via the standard 4Matic AWD system. This system, along with firm four-wheel independent suspension and speed-dependent electromechanical rack-and-pinion steering, truly elevates the driving experience. The A 35 eats up corners, loves to sprint, hugs every curve, and instills confidence with its competence. 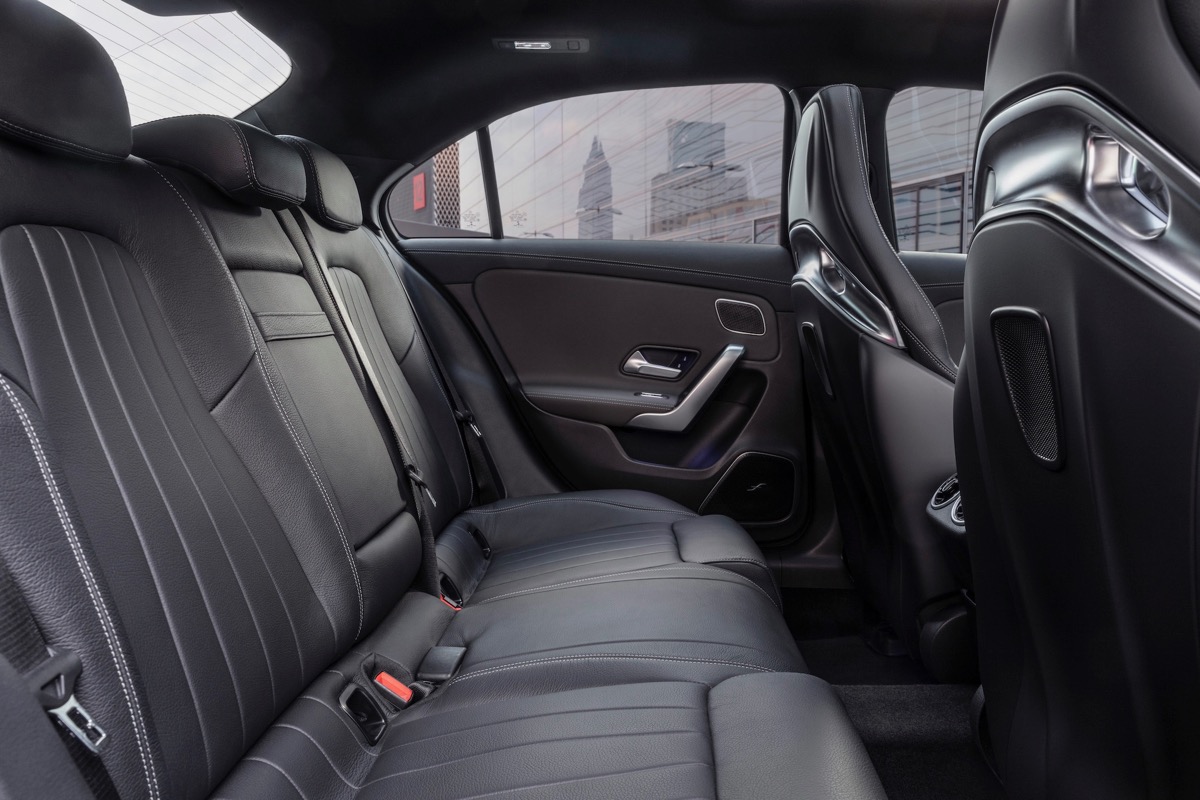 When we discussed look and feel, we couldn't help but bring up the form and function of several features. That's one of the strengths of Mercedes-Benz and AMG design—form follows function, and we believe beautiful design is a result of a well-engineered and executed function.

So, we'll point again to the cool HVAC vents and to the location and mounting of the virtual instrument panel and touchscreen infotainment interface.

We'll also recognize the gear shift stalk, which is steering-wheel-mounted. It's not the big mechanical lever of old, but a more delicate shifter prompting electronic responses ( also known as shift-by-wire). Paddle shifters allow drivers to control gear selection directly, too—a function we only toy with or use in very specific situations, like extreme declines in mountainous regions. Transmission and gear-selection strategies differ from manufacturer to manufacturer these days, and most take a few days (at least) to become second nature, so don't dismiss a new (to you) system on your first test drive. We've found the Mercedes-Benz system feels natural after a day of driving at most, and works like a charm.

The A 35 has some welcome American-style amenities—generously-sized cup holders in the center console, and bottle pockets in the doors. It also has seat-back pockets, a fold-down armrest/cupholder in the second row, and other functional goodies. Even though the A 35 is a sedan, the back seat is sized for kids; occasional adult use for short rides is all it can deliver. If you need to drive for the work carpool, borrow the minivan for the day. Mercedes quotes 8.6 cubic feet of trunk space with the rear seats in place, so the A 35 isn't ideal for Ikea runs, either. 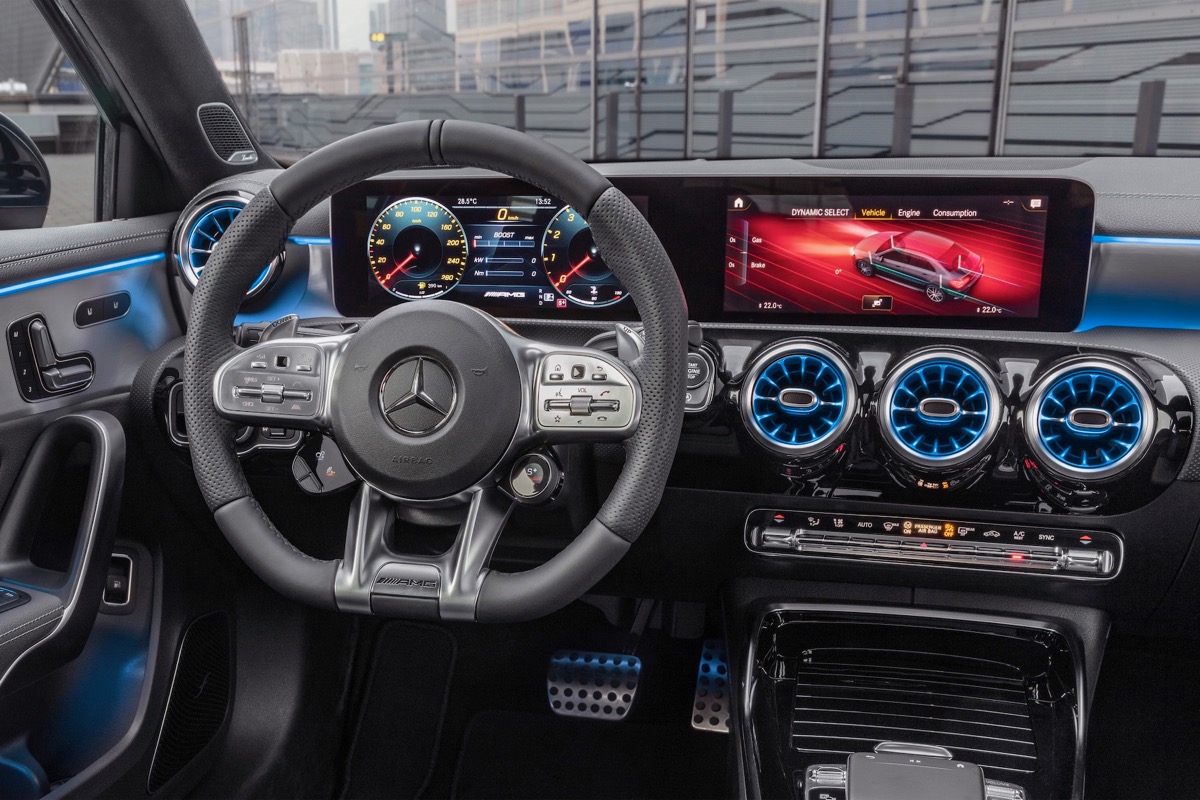 The A 35 comes with a healthy level of standard technology. Most prominent is the dual-screen virtual instrument panel/infotainment touchscreens. Much like the Mercedes-Benz strategy on gear engagement, the company has its own approach to the content on the instrument panel. There's a tiny, button-sized sensor on each side of the steering wheel that acts like a miniature touchpad. In combination with other switches on the wheel, you can configure the instrument panel, change media selections, respond to prompts, and other functions. At first, the setup can be overwhelming, because the little touchpads are so unfamiliar, but soon they become indispensable.

The MBUX (Mercedes-Benz User Experience) multimedia system makes interacting with the A 35 easy. Just say "Hey, Mercedes," and the MBUX infotainment system springs to life, ready for your vocal input. Optional enhancements can expand the AI-based system to understand your commands to change climate-control settings, turn interior lights on and off, and other functions. It's a peek into the future, and a fun party trick for now.

Our test vehicle came loaded with tech options, including the $1,295 Multimedia Package (navigation, navigation services for five years, MBUX augmented reality for navigation, and traffic sign assist); $800 Premium Package (Keyless-Go, hands-free access, auto-dimming rearview and driver-side mirrors, and power-fold side mirrors); $460 SiriusXM radio (with free trial period), and $200 wireless-device charging. We believe many of these features should be included on a luxury sedan, and adding them as packages is a little misleading.

An option we'd be happy to pay for is the $850 Burmester surround-sound system, a great-sounding audio system for the A 35. Standard Apple CarPlay and Android Auto functionality, along with Bluetooth hands-free and audio streaming are a welcome touch. 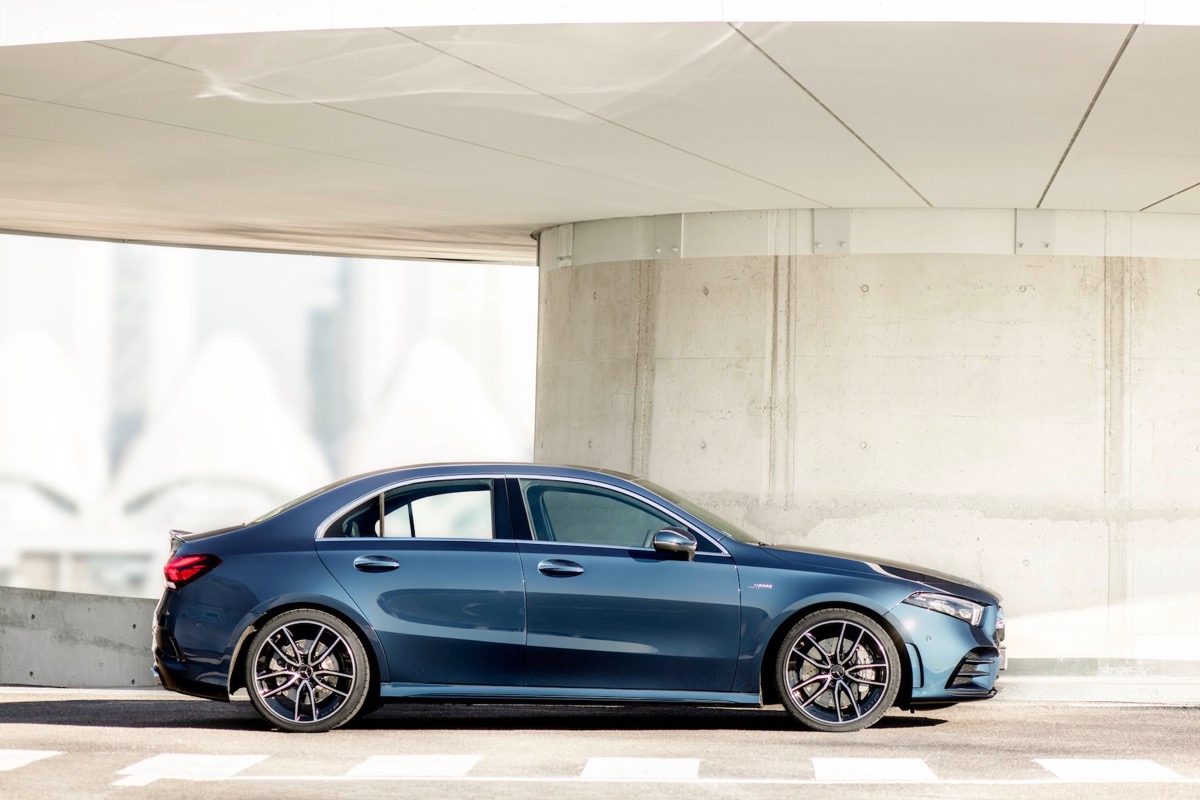 Mercedes-Benz prides itself on being a safety innovator, and it has shared multiple patents with the rest of the automobile industry to promote safer cars for all. The A 35 comes with a healthy dose of standard active and passive safety systems to continue this legacy.

Standard safety features include blind-spot assist, a rearview camera, LED headlights, LED taillights, an advanced airbag protection system, active brake assist, an electronic stability program, and emergency call service. The front of the A 35's body has been reinforced for additional torsional stiffness, which should make the car easier to control in all situations. An optional Driver Assistance Package adds adaptive cruise control, blind-spot monitoring, and lane-keep assist, among other features.

Neither the Insurance Institute for Highway Safety (IIHS) nor the National Highway Traffic Safety Administration (NHTSA) have released crash-test safety ratings for the A 35. 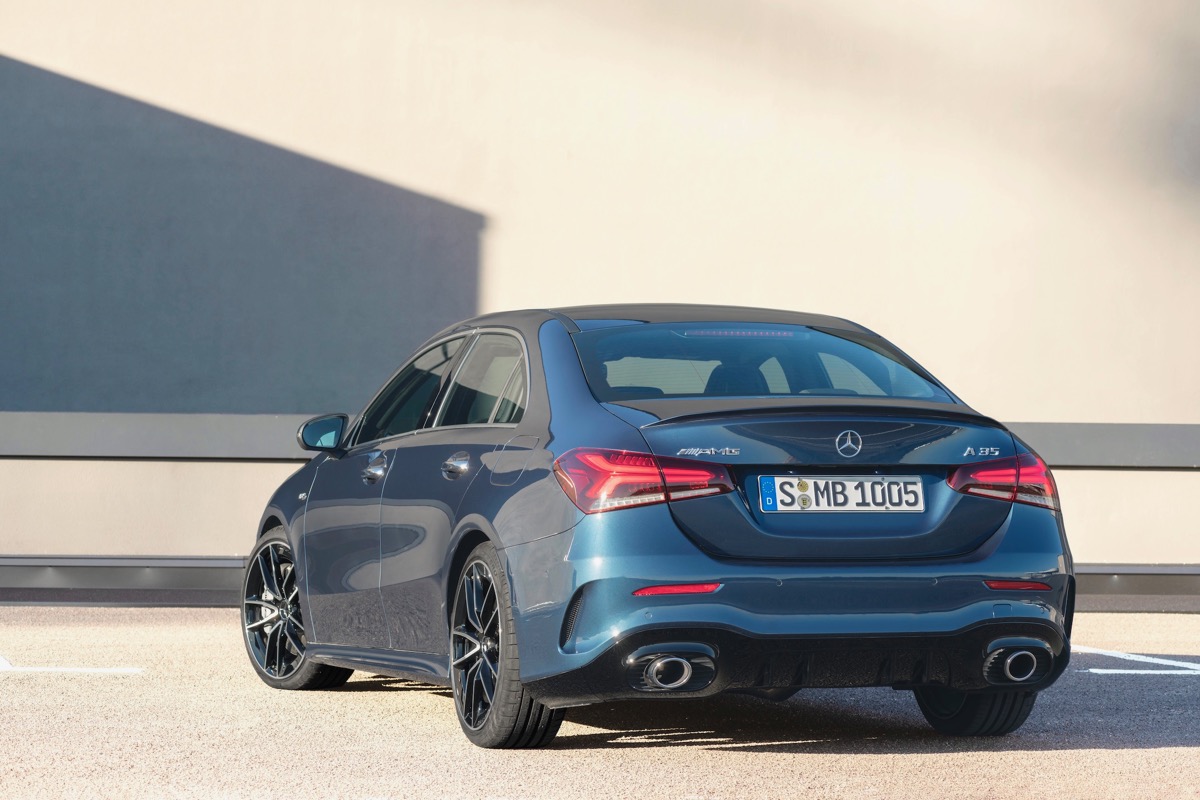 Applying the AMG treatment to the A-Class causes a bit of cognitive dissonance. The A-Class represents Mercedes' shot at the entry-level, a compact sedan starting just above $30,000. That's just about the same price and size as the Mazda3 2.5 Turbo Premium Plus sedan, and only a little higher than a Toyota Corolla XSE Apex Edition. The AMG A 35 pushes the starting price to $45,850. Our test vehicle carried a $56,020 MSRP with options and destination fee, not exactly an entry-level price. You could spec out a "base" A 35, but you'd be missing out on features we consider essential, like navigation.

If you're considering an A 35, you're probably also looking at the other German premium compact sedans. The Audi S3 starts at $44,900, and an RS 3 version has been announced for 2022, but pricing details lag. The BMW M340i xDrive (starting at $56,700) is probably the closest competitor to the A 35 in the U.S.

Driving the A 35 might tilt the balance a bit in its favor, as the sedan really is a delight, and that's what a premium sport sedan has to deliver to enter the class. The sharp exterior, modern interior, and overall solid feel of the car can't be denied—and maybe it shouldn't be. Be sure to give the 2021 Mercedes-AMG A 35 due consideration if driving experience is a big part of your buying decision.

What's your take on the 2021 Mercedes-Benz A-Class?

Have you driven a 2021 Mercedes-Benz A-Class?
Rank This Car

Enter your zip to see incentives for a new A-Class in your area.