Looking for a New Mazda MX-5 Miata in your area?

Mazda has carried over the attributes that make the Miata so popular into 2021. 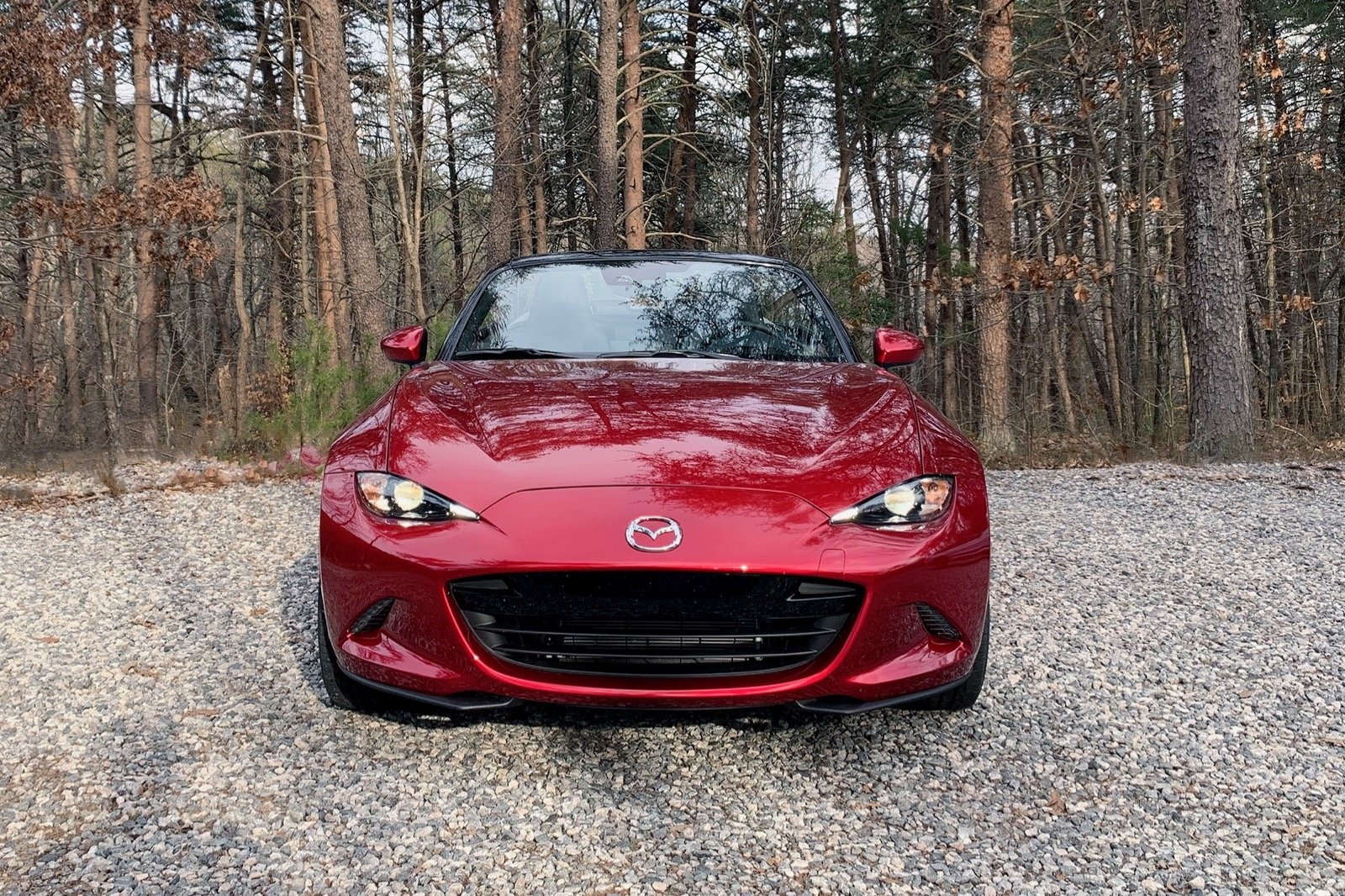 The Mazda MX-5 Miata carries over its upgrades from the 2020 model year into 2021 with few additional changes. The rear-wheel-drive (RWD) sports car continues to be unique, not just for its body style but also its price point. In terms of engaging third garage stall options, the budget-friendly Miata ticks a lot of boxes. 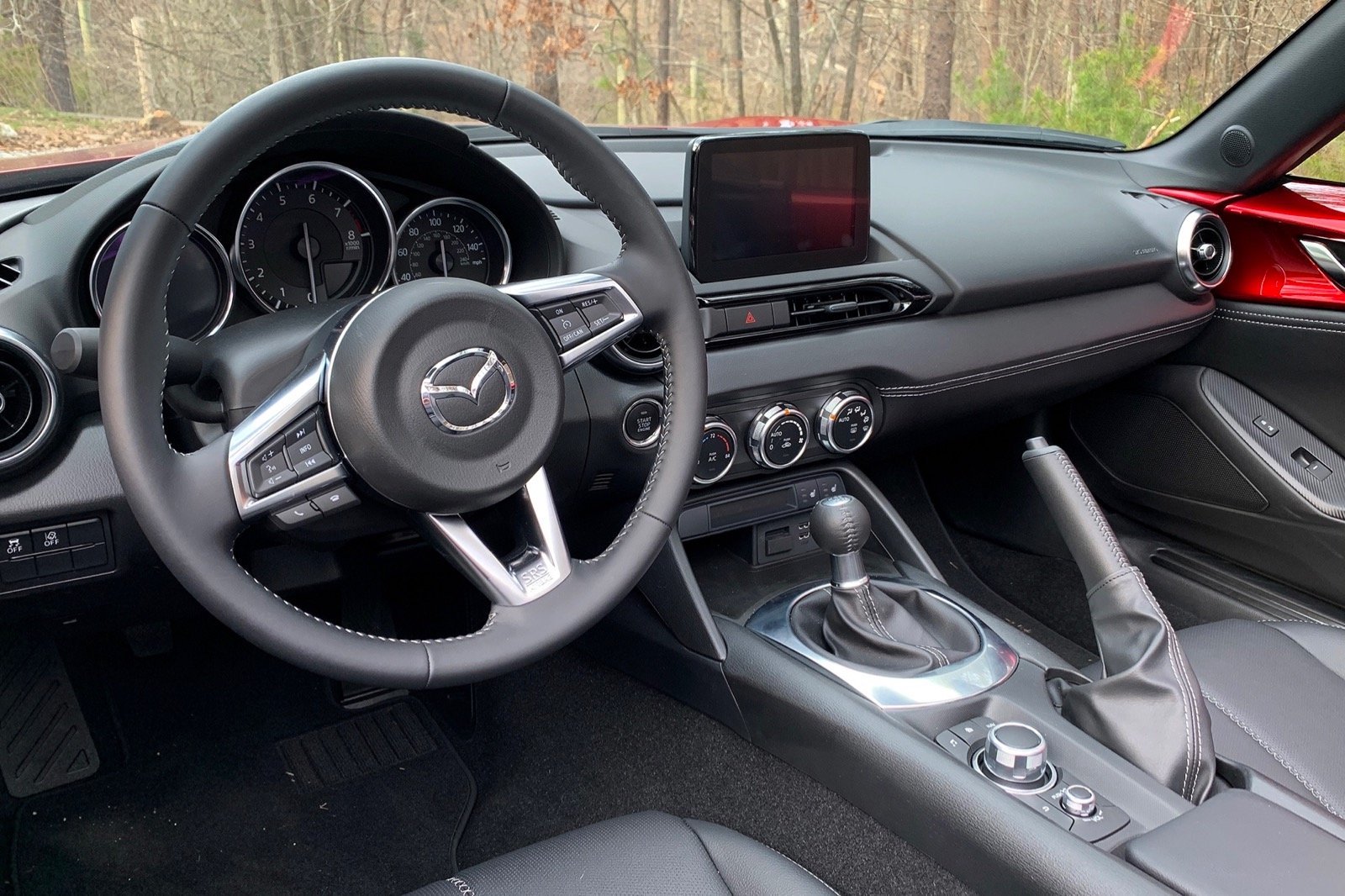 When it comes to low-cost sports cars, there’s exactly one new model on the market Americas can turn to: the 2021 Mazda MX-5 Miata. Unlike the Dodge Challenger and Ford Mustang, the Miata isn’t known for its big-bodied American muscle. Unlike the Toyota GR Supra, it’s not better on a track than off. And unlike the Porsche 911 and Lexus LC, it doesn’t cost half the value of the average house.

The exterior of the Mazda isn’t as glamorous as the 911 or LC, but it’s by no means a cheap-looking alternative. Especially when bathed in the Soul Red Crystal Metallic paint color, the Miata is eye-catching. A number of other paint colors are available, but not every one is an option in each trim level.

The paint color continues into the interior of the car dressing up the door tops giving the car a unique style that adds to the design.

Mazda sells the Miata in three trim levels: MX-5 Sport, MX-5 Club, and MX-5 Grand Touring. The Club and Grand Touring grades are offered with an available retractable fastback (RF) configuration with a hardtop that transforms into a convertible via the press of a button in 13 seconds. Moving to the MX-5 Miata RF from the traditional soft top is a $2,855 uncharge on the Club model and $3,250 on the Grand Touring.

The interior of the car is premium in the Grand Touring trim, as tested, but on a tight budget. Black leather seats that roast your bum on hot days are standard in the higher grade while base models get cloth upholstery. White Nappa leather seats are newly available for 2021.

The only add-on available for the 2021 Miata, outside of a few accessories, is the Brembo/BBS Recaro Package. The $4,470 add-on gives the car Brembo front brakes with red calipers; Mazda rear brakes with red calipers; BBS forged 17-inch aluminum-alloy wheels in Dark Gunmetal; an aero kit with side sill extensions, rear bumper skirt in Brilliant Black; and heated black Recaro sport seats.

The car’s signature design elements like an easy-to-use trio of climate control dials on the center stack and circular air vents continue to be perfectly serviceable in an increasingly digital world.

A large portion of the center console space is taken up by the car’s infotainment system controls and hand brake. This leaves room for only one floating cup holder at the rear of the console in front of the vertical small-item storage bin. That cup holder, and the one that attaches at a knee touchpoint in the passenger's footwell, can be removed, though finding a place to store them within the car proved difficult.

The Miata’s standard three-spoke, leather-wrapped steering wheel is a carryover from other Mazda models, but that’s not a bad thing. Neither is the fact that there’s no Alcantara to be found anywhere in the cabin. 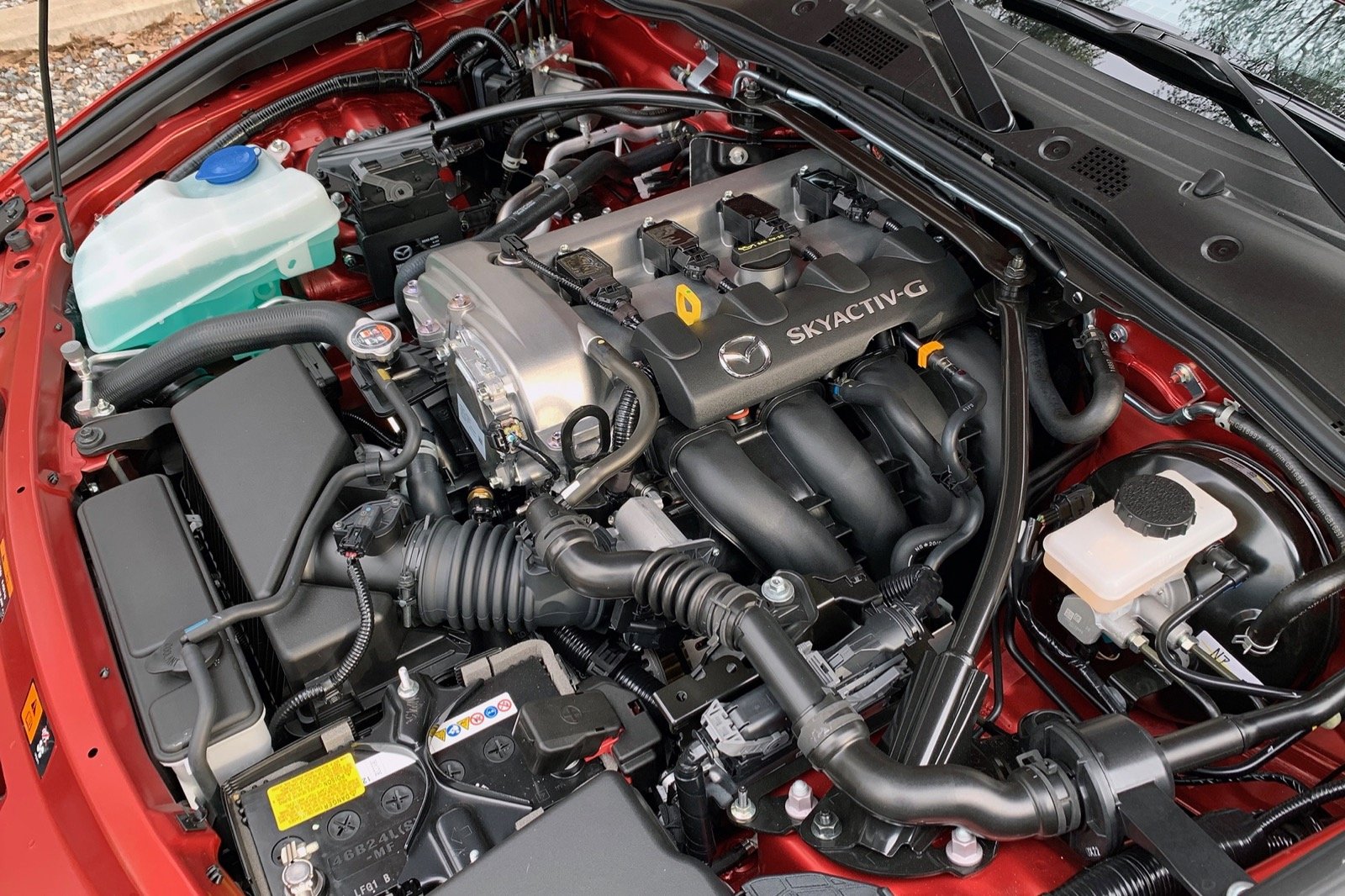 Every Mazda MX-5 Miata is powered by a 2.0-liter four-cylinder engine that delivers 181 horsepower and 151 pound-feet of torque. Those figures are made more exciting by the fact that the curb weight of the car is just under 2,400 pounds and the car achieves a near-perfect 50:50 weight distribution.

A six-speed manual transmission is standard, and a six-speed automatic transmission is available. Drivers who have a car with a stick shift are able to enjoy short, easy throws that make the Miata one of the easiest standard transmission vehicles to learn to drive. The car’s clutch is forgiving.

The result of the powertrain and tuning is rousing acceleration with sufficient thrust to remind drivers that they’re piloting a sports car, without the aggressive American muscle car in-your-face growl from the tailpipe.

The car’s manual transmission is slightly less fuel-efficient than its automatic counterpart. The six-speed gearbox gets an EPA-estimated 26 mpg in the city, 34 mpg on the highway, and 29 mpg combined. Opting for the automatic will give you one better on the highway moving the EPA-estimated combined fuel economy to 30 mpg.

Mazda only sells the MX-5 in rear-wheel drive.

Despite the car being low to the ground and having a stiff suspension, the Mazda MX-5 does not pass on every bump in the road to the driver though a fair amount of jolts do pass through.

Mazda has tuned the Miata to deliver a connected and engaging drive. The two-seater goes where you want it, when you want it, in an almost Mario Kart-like fashion. It’s truly a car for drivers who like to be behind the wheel.

One look at the Miata tells you that it’s not much for passenger or cargo space. The car has 4.59 cubic feet of space in its trunk, which allows you to stow a few carry-on suitcases or bags from a trip to the grocery store. When you leave the car, you’ll want to keep the key fob handy. Aside from the button on the interior and the fob, there’s no way to open the trunk.

The small cabin and its intrusive transmission tunnel severely limit passenger legroom. It’s not uncommon for knees to brush the dashboard or for the driver and passenger to get the feeling that they’re as close to each other as two purl stitches on the scarf Grandma’s knitting for you for Christmas.

There’s basically no luck in getting the seat to recline unless you move the bottom portion of the chair far forward, in which case your knees may be at your chin.

The standard tilt-and-telescope wheel does help with some of the size issues.

The Miata isn’t made for taller folks either. Those long-waisted drivers passing six feet tall may find themselves having to put the roof down and look over the top of the windscreen to get a good view of the road.

The Miata isn’t the car you’ll want after a long workout either. Folding yourself in and out of it can be a chore, especially if parked on an incline.

While the cupholders are functional, you’ll likely want to move the passenger side one to gain a bit of extra legroom. That means that the passenger is left holding their drink in their hands for the length of the trip. Mazda does win praise for the fact that a water bottle fits in the cupholder that is attached to the rear of the center console, and the placement of that bottle does not interfere with shifting.

Aside from space, the Mazda does a really good job of delivering what the customer needs for the drive and nothing more. There are a few amenities, like heated seats, that are a nice touch, but otherwise, the car leaves the pizzaz up to the drive experience. 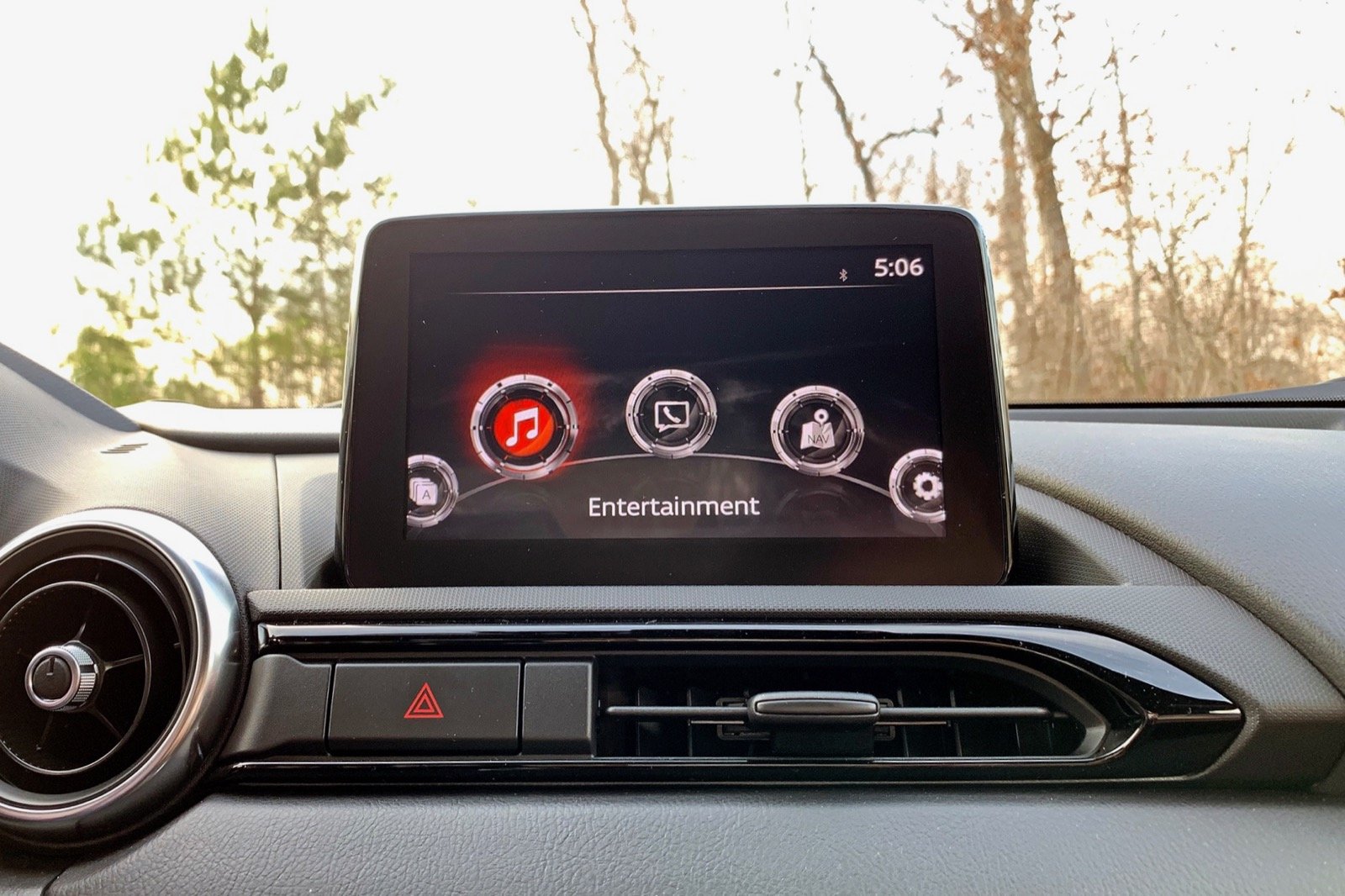 The 2021 MX-5 Miata isn’t a tech-heavy ride or drive experience. That’s probably the way customers like it, with the emphasis on the time at the wheel rather than what’s going on other than the drive.

That roster is pretty standard for a sports car, but recently model-year improvements for other cars have begun adding more and more standard and available tech that make the Miata’s offerings seem a bit outdated.

The infotainment system is operated via a dial on the center console or by using the touch screen. While major functions of the system like navigation and changing entertainment inputs are easy to perform, the system as a whole remains difficult to use compared to the next-generation operating systems currently installed in other automakers’ vehicles, premium or otherwise.

The volume and selector knob is awkwardly placed uncomfortably out of reach of the driver, forcing them to rely on wheel controls for that and seek options for favorite radio stations. These parts are carried over from other, larger Mazda vehicles where their size, placement, and design work better with the center console layout. If you don’t have presets set, there’s no easy way to scroll between channels. 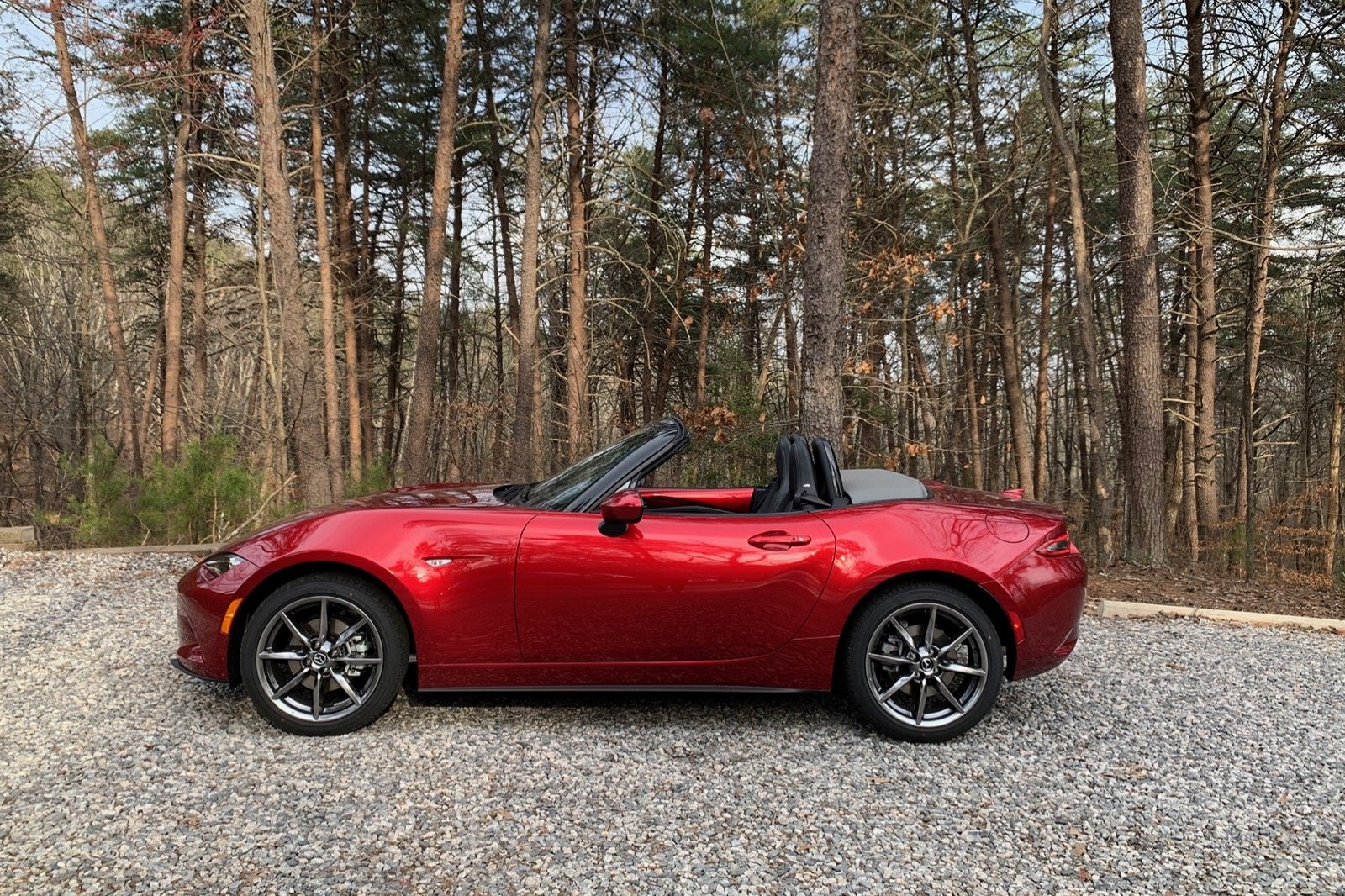 Neither the National Highway Traffic Safety Administration (NHTSA) nor the Insurance Institute for Highway Safety (IIHS) has rated the Mazda MX-5 Miata for safety and crashworthiness. The NHTSA has not issued any recalls on the model so far.

Mazda backs every Miata with a three-year/36,000-mile limited warranty and a five-year/60,000-mile powertrain warranty. 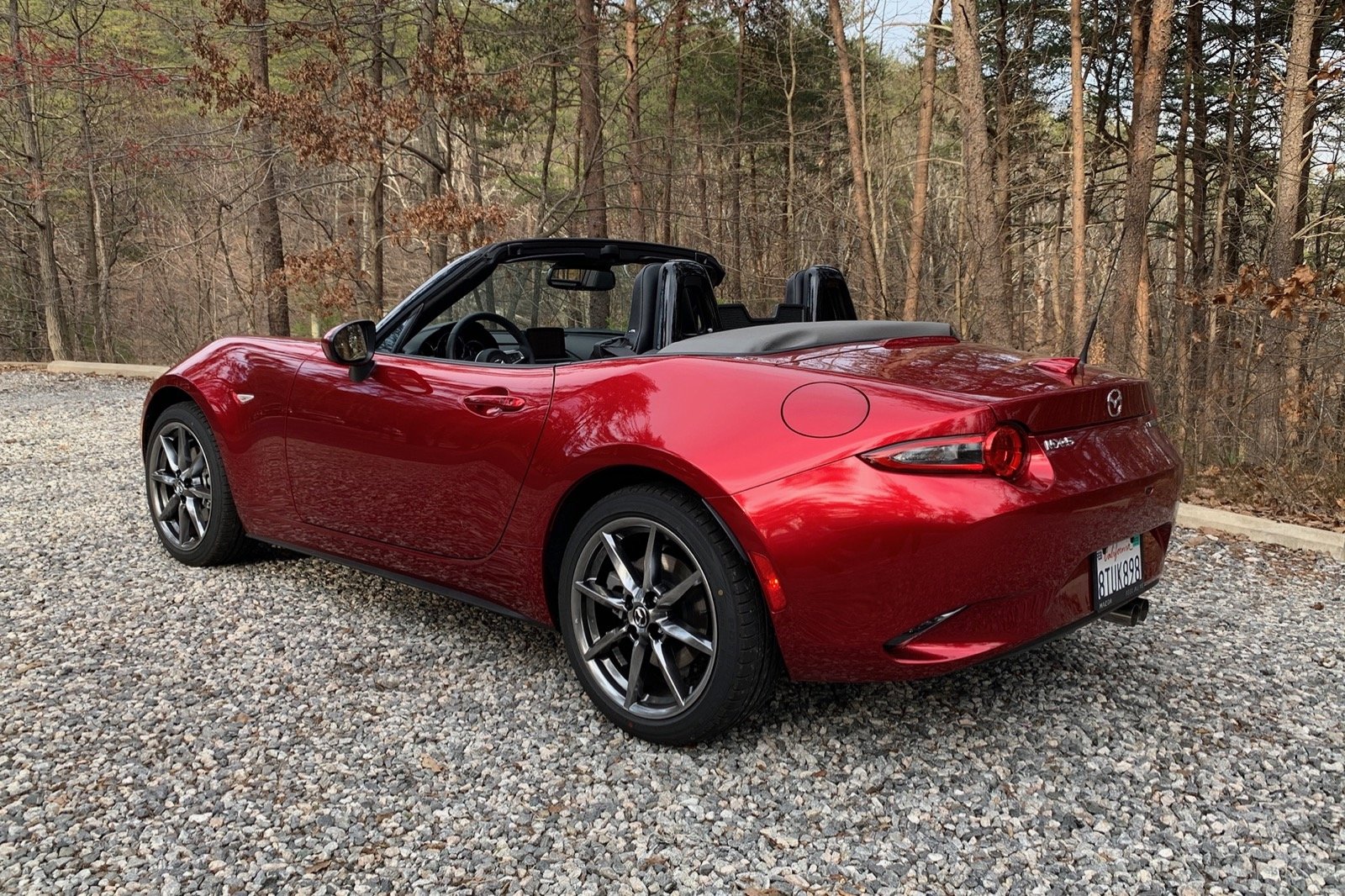 Hard or soft-topped Miatas are a unique breed. There aren’t really many natural competitors to them in the new car marketplace now that the Fiat 124 Spider has been discontinued. The closest thing you’re going to find is the Toyota 86 and Subaru BRZ. Neither of those is offered as a ragtop. Still, they have more horsepower and torque, and more passenger and storage space—though that all combines to deliver a heavier curb weight. The Subaru version is available with a manual or automatic transmission. The Toyota is automatic-only. Pricing for the models is similar to the Miata.

The BMW Z4 and Toyota GR Supra are the next closest competitors to the Miata in terms of size and handling. The Z4 is offered as a roadster while the Supra is only available as a coupe. They both are priced far higher than the MX-5 with a starting price of $49,700 and $42,990, respectively.

If you’re okay with a coupe body style, similar to how the Miata RF model looks when the roof is up, the 86 and BRZ are worth a test drive though you might want to wait for the redesigned 2022 Subaru BRZ to hit the market later this year.

If you are dead set on the Miata, there may not be a better time to buy one. They’re not selling tremendously well in the U.S. and there’s no guarantee of a next-generation model.

Enter your zip to see incentives for a new MX-5 Miata in your area.