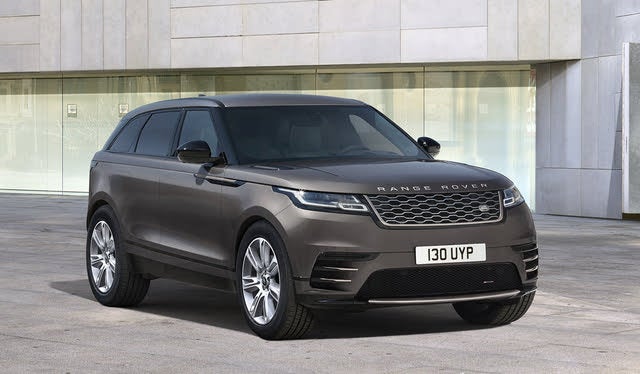 Looking for a New Land Rover Range Rover Velar in your area?

In the automotive world, style is often handed out over substance, but that’s not the case with Land Rover. The legendary British automaker builds incredibly luxurious SUVs that offer surprising off-road specs and capability. The idea is so popular that Land Rover’s catalog has ballooned to include multiple variants of the Range Rover SUV. One, the Range Rover Velar, brings sleek styling and an opulent interior, but also offers off-road driving modes and available air suspension. The 2021 model year brought multiple updates to the SUV, including a switch to turbocharged six-cylinder engines instead of supercharged, a new infotainment system, and more standard tech.

The base engine’s 247 horsepower does a decent job at moving the Velar around town and on the highway, but both optional V6s make a better pairing for the SUV. They provide lively acceleration, and the eight-speed automatic matches well with smooth, responsive performance.

Though it looks the part, the Range Rover Velar is not a performance SUV. It’s more than capable of handling a curve, however, and is more athletic than some of its rivals. That said, the ride can be harsh at times. The good news is that, like other Land Rover models, the Velar can hold its own off-road. Selectable terrain driving modes are standard, along with four-wheel drive. Land Rover offers a more robust drive mode system and adaptive air suspension that can raise or lower ride height.

The Velar is part of a group of high-cost, low-volume vehicles that don’t regularly receive full safety and crash testing. The Insurance Institute for Highway Safety (IIHS) and the National Highway Traffic Safety Administration (NHTSA) don’t crash all vehicles due to the extreme costs involved. That’s not an indication of the Velar’s safety, or lack thereof. It just means that costs add up quickly when crashing expensive luxury vehicles.

The 2021 Range Rover Velar is on sale now at a starting price of $58,050. The mid-range R-Dynamic S trim starts at $60,050, and the top R-Dynamic HSE starts at $78,050. Options, including upgraded powertrains, add to that cost quickly and considerably.

What's your take on the 2021 Land Rover Range Rover Velar?

Have you driven a 2021 Land Rover Range Rover Velar?
Rank This Car

Enter your zip to see incentives for a new Range Rover Velar in your area.