Looking for a New Kia K5 in your area?

An all-new sedan replaces the Optima with more style and speed. 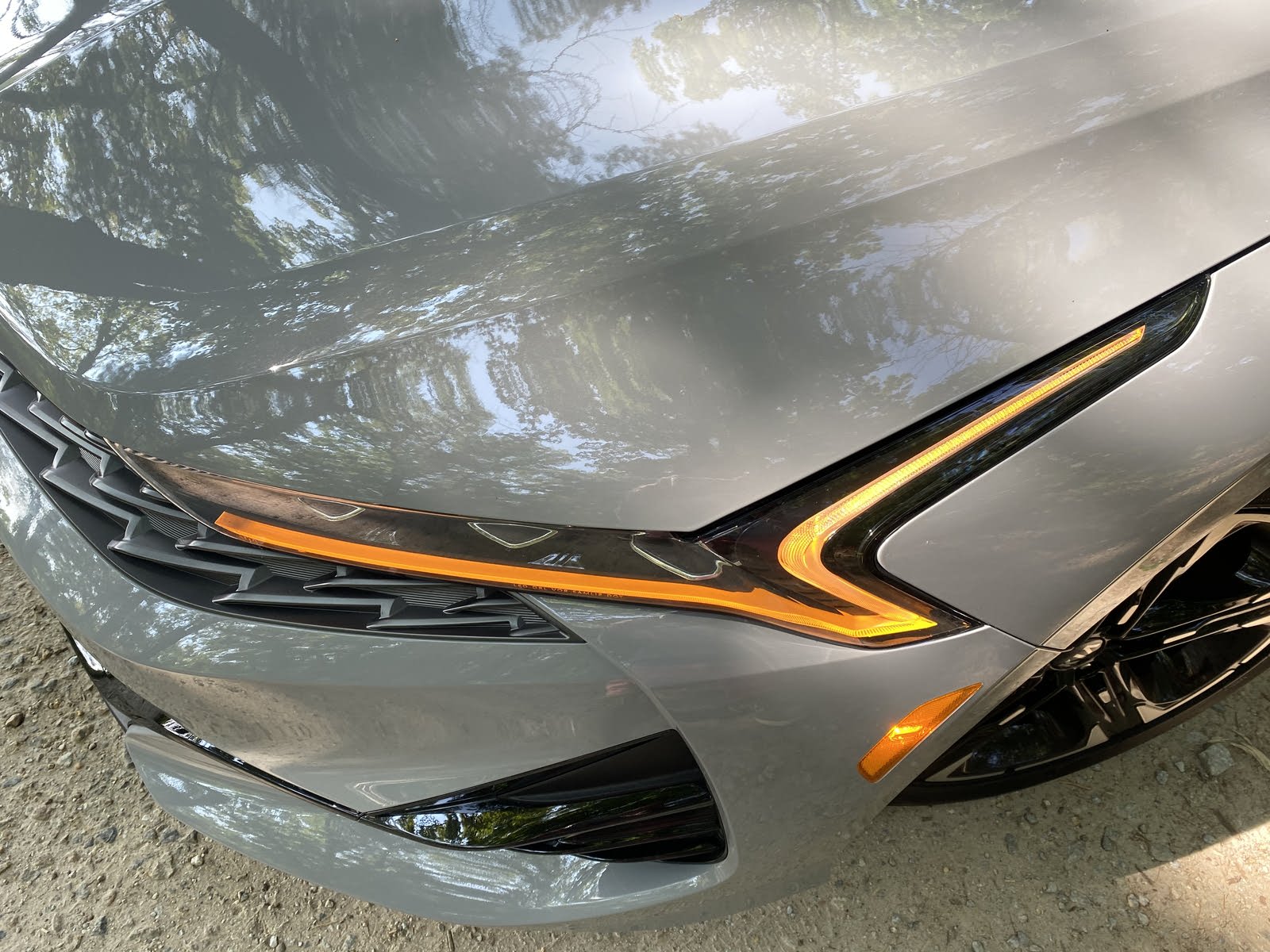 Sedans are now the most exciting new cars in the mainstream market. They are to crossovers today what craft beer was in the early 2000s. They’re not on every corner anymore because Americans prefer trucks over cars, but sedans like the 2021 Kia K5 are refreshing to see, surprisingly good to drive, and will make you look cultured and smart without having to try. The K5—and its new name—replaces the Optima and upgrades nearly everything in the pursuit of style and performance. It’s one of the best midsize sedans out there. 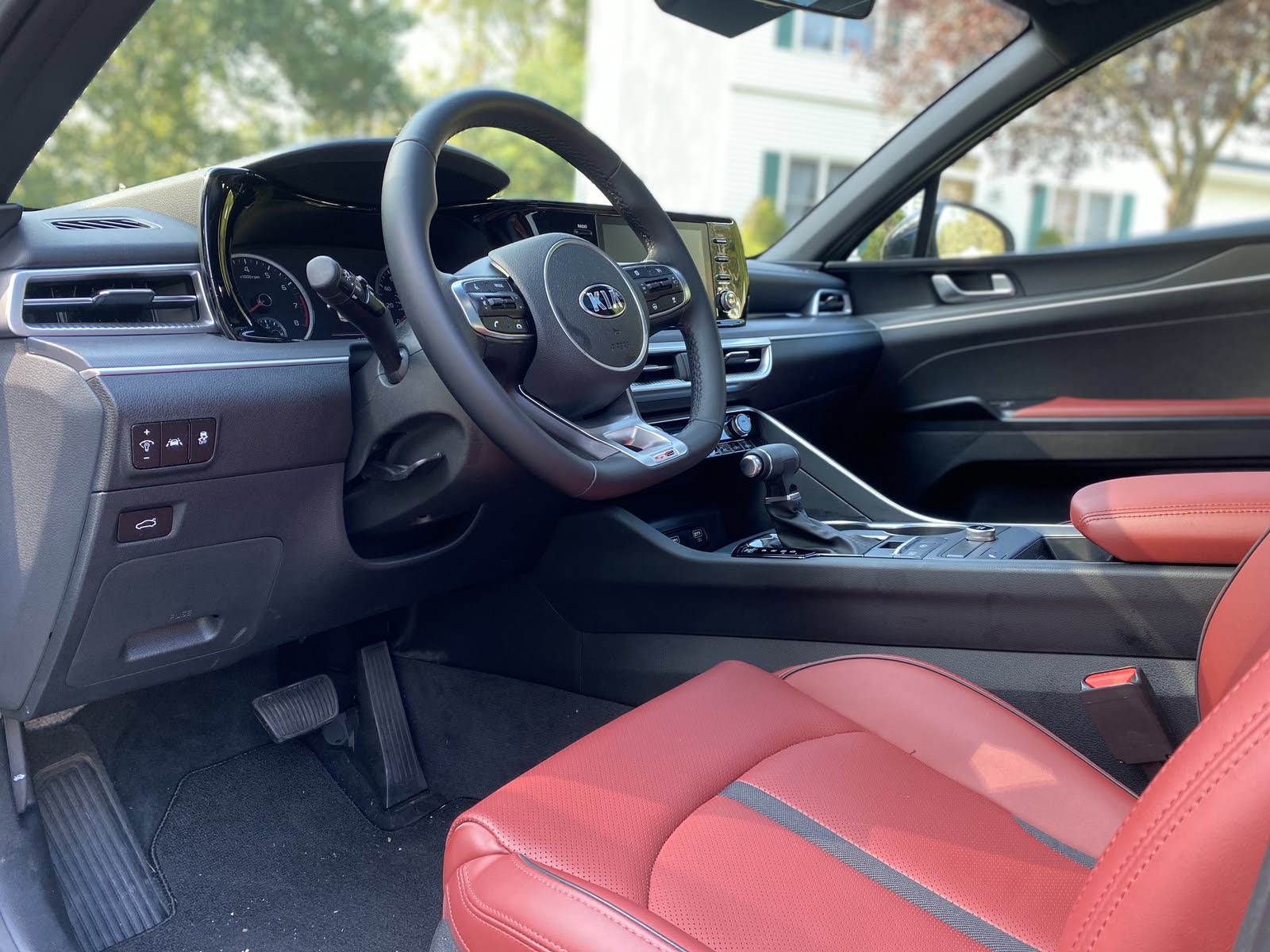 In name alone, the K5 is fresh skin for Kia’s new identity. Kia enthusiasts in the U.S. have been swapping out the Kia badge on their Optima sedans for “K” logos that the K5—the South Korean version of the Optima—wears in its home market. Soon, Kia is expected to replace its corporate logo as part of a total brand makeover. The automaker no longer makes drab sedans like the first Optima or horrifyingly ugly sedans like the Amanti. It charges a lot more money today for really good sedans, so consider the K5 a symbolic break from Kia’s not-too-distant past. Still, the Optima had been good since the 2011 model year, and it gained a solid recognition over the past decade. K5 sounds as memorable as insect repellant. At best, the name is robotic.

You will remember a K5 the moment you see one. It’s a sedan in the fastback form, not entirely dissimilar to the much more performance-oriented Kia Stinger. Styled in our test car’s GT-Line trim with flat Wolf Gray paint and fire-engine red seats, the K5 appears like an Audi A5 Sportback. (It’s no accident. Peter Schreyer, who spent 25 years at the Volkswagen Group, led Audi out of the doldrums. He’s now chief designer for the entire Hyundai Motor Group, which includes Kia and Genesis, and has worked for the Korean automaker since 2006.) The K5 shines with details. A long, ovoid-shaped rear window blends into the short tail and polished black trim wrapping around the thick D-pillars. This suggests the K5 has a tailgate, but it has a conventional trunk. The taillights are unique, with dashed LEDs meeting at opposing angles in one thin strip. This emphasizes the K5’s width (it’s one inch wider than the Optima).

Yes, there are fake air vents on the fenders and fake exhaust tips below those, but they’re executed so well and the K5 isn’t going to overtake a Porsche. All the proportions make the K5 sportier—it’s also lower and longer than the outgoing Optima, with an extra two inches at the wheelbase. The front is killer. Standard Z-shaped amber LED running lights trace into the fenders and blend into a honeycomb grille. On the GT-Line, the grille is slimmer and full of textures—sort of like a relief sculpture—and the lower bumper features stacked LED fog lights with black air fins surrounding them. At every angle, the K5 is a looker and utterly pleasing. However, the base 16-inch wheels make the K5 look dowdier than it appears on Kia’s online configurator. Make sure to order up for max style.

The interior goes for broke, too. The dash is split between driver and passenger—not only is there a Supra-style divider by the passenger’s left leg, but the center stack is also angled toward the driver, and the passenger-side dash angles away from it in the opposite direction. The GT-Line features red seats with black accents and piping and a flat-bottom steering wheel that’s a delight to hold. Our trim had the standard analog gauges and smaller 8-inch touchscreen, yet it felt upscale thanks to polished black trim on the dash and quality materials throughout. The vinyl on the seats feels like leather, the door tops and dash are padded, and the hard plastic in the lower areas has a good grain and finish. More details, like the instrument panel overlapping the driver’s-side air vent or the little fin rising out of the front door armrests, show the K5’s knack for style. It exudes sportiness and quality missing from most GM and Ford interiors—by far. 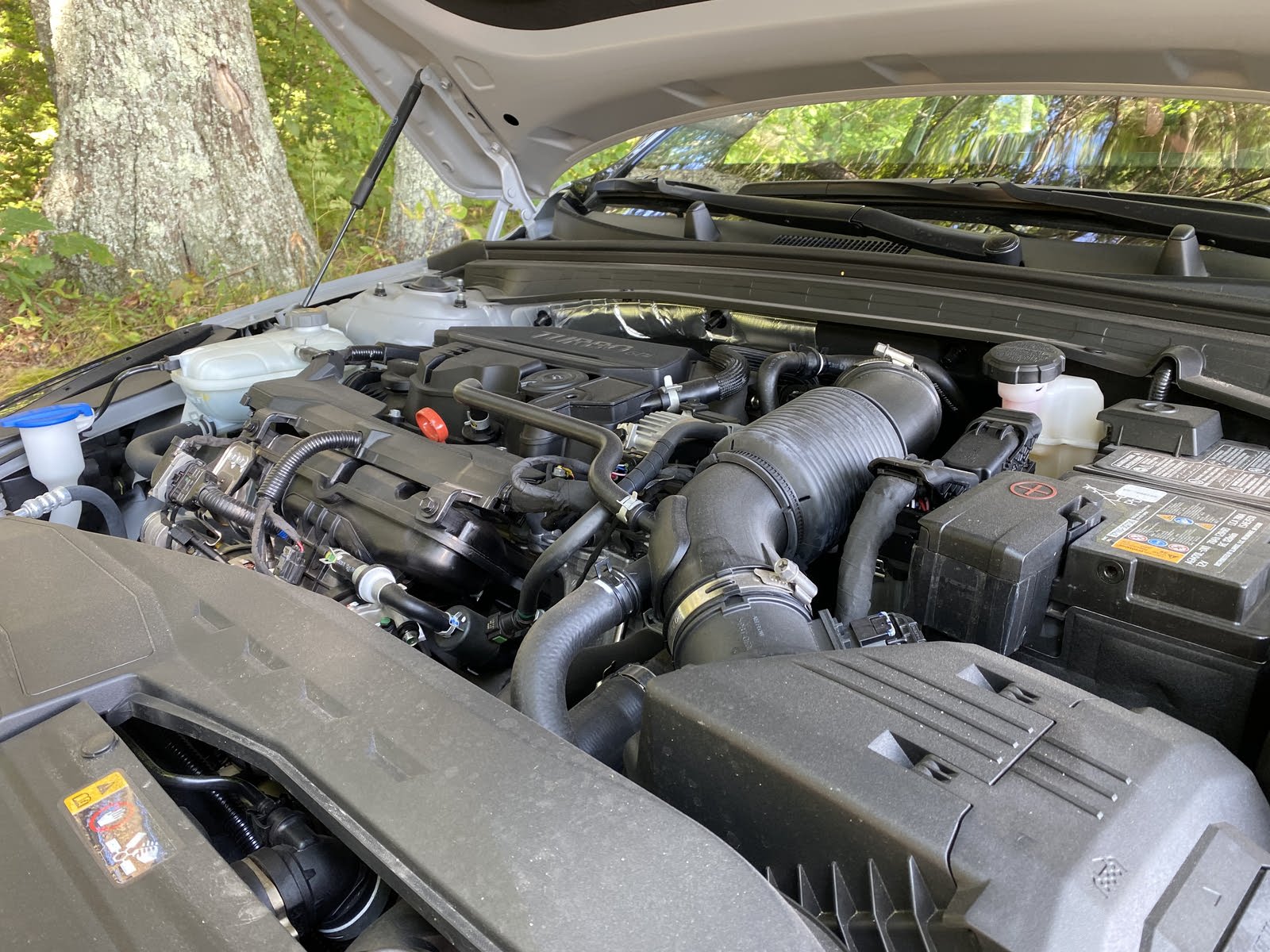 The K5 doesn’t drive with the verve suggested by the GT-Line’s aggressive styling. This particular model would get wiped by a Volkswagen GLI, one of its primary competitors, and it doesn’t have paddle shifters. The suspension has softer damping and the Pirelli P Zero All-Season tires squeal in protest when pushing the K5 through tight turns. A sports sedan this is not. Our front-wheel-drive (FWD) test car had good brakes and communicative steering. The ride is isolated and balanced. But the GT-Line is an appearance package that falls short on handling.

However, the GT trim promises a better suspension and a 2.5-liter turbocharged four-cylinder spitting out 290 horsepower and 311 pound-feet of torque. Those are big numbers, and yet they’re fed through the front wheels. All-wheel drive (AWD) is an option on the lesser-powered GT-Line and LXS trim levels, not the GT. This omission may be an early production problem due to parts and labor shortages from COVID-19, or it just might be the way Kia is pricing the car. But putting that much power down through a FWD drivetrain without a limited-slip differential or other handling tricks spells disaster. We’ll have to wait and see.

The K5’s standard engine is a 1.6-liter turbo-four that was optional on the Kia Optima. With 180 hp and 195 lb-ft of torque, the K5 shrugs off slow traffic, and its eight-speed automatic transmission reacts quickly, though not always smoothly. At midrange and highway speeds, the K5’s initial thrust at launch peters out. Switching to Sport mode helps keep the engine on the boil when merging and passing are the priorities.

Fuel economy is very good, at an EPA-estimated 27 mpg city, 37 mpg highway, and 31 mpg combined on FWD models with the base engine. The AWD version drops that estimate to 26/34/29. We averaged nearly 36 mpg over 750 mostly highway miles. That’s exceptional for a roomy car for four. The GT has not yet been rated.

If the GT performs as admirably as Kia claims, we’d be inclined to raise the K5’s score in this review. Driven gingerly as a family sedan should, the K5 has little shortcomings. But the K5’s sporty trim so far doesn’t match the hype. 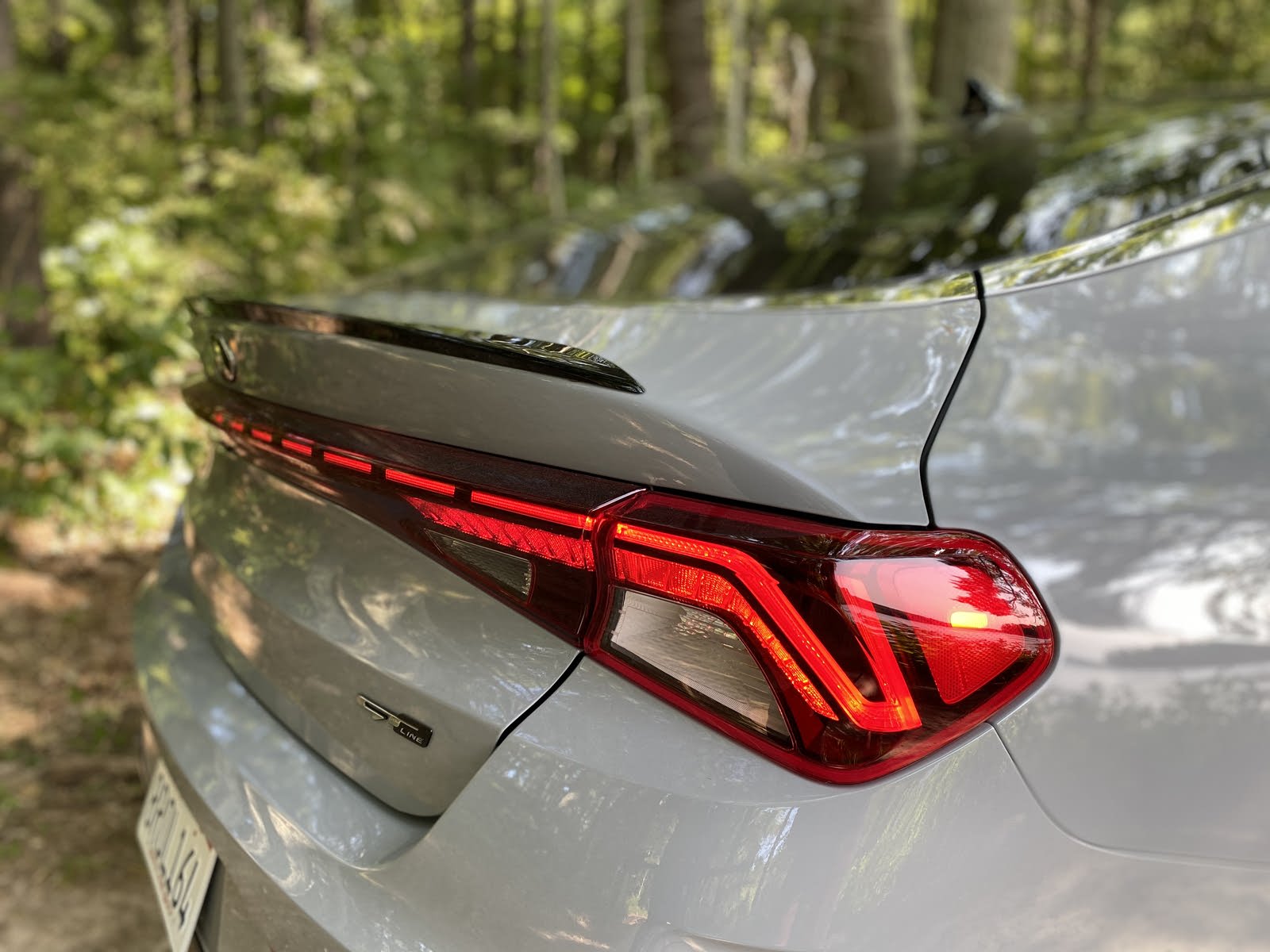 The point of any sedan is to fit two adults in the back, and despite the K5’s raked profile, two adults fit in comfort. There are scalloped portions of the roof and front seatbacks to provide enough headroom and legroom to accommodate six-footers without complaint. Rear air vents are missing and should be standard at this point in 2021 models, but overall comfort is good.

The front seats are supportive and firm, a perfect combination for the long drives we took during our test. Hard buttons for the climate controls, stereo, and shortcut buttons surrounding the touchscreen proved easy to find and use. Many car companies can’t seem to figure out where smartphones should sit, but Kia’s wireless charging pad is a handy, rubber-gripped slot just aft of the center cubby. It’s secure yet within easy reach.

The infotainment system and central display on the instrument panel are both simple and quick to operate various functions. A 10-inch display with touch-sensitive buttons is optional. For more details on how this newer system operates, read our review on the 2020 Hyundai Sonata Hybrid.

Trunk space is 16 cubic feet before the rear seats fold down. 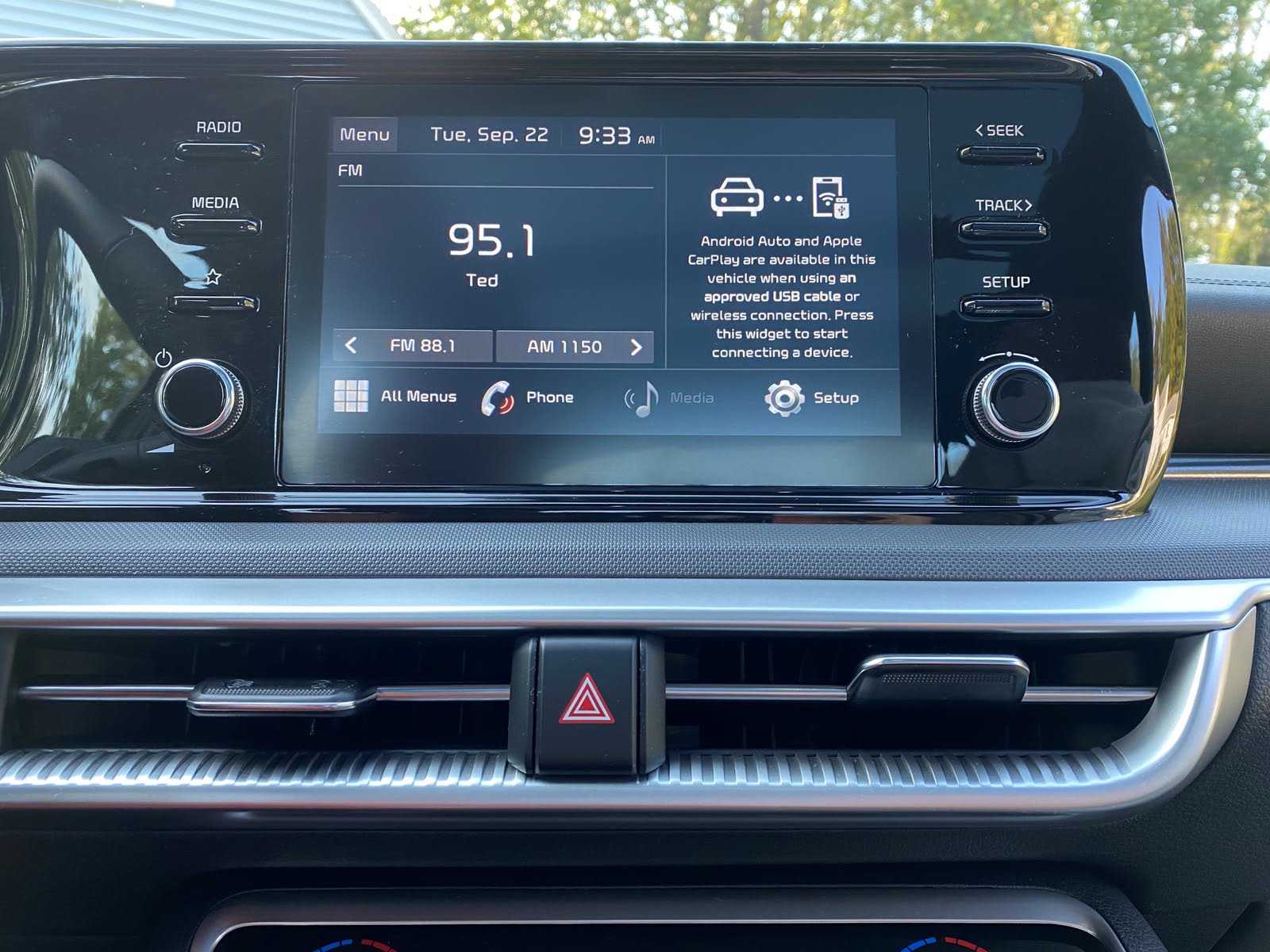 Without factory nav, the K5 was one of the easiest cars to set up thanks to wireless Apple CarPlay and Android Auto as standard. However, while we left the car running in accessory mode and walked out of range with our phone, Apple CarPlay sometimes wouldn’t restart on its own. That’s a minor glitch for a major convenience. LED headlights, auto high beams, dual-zone climate control, lane-keep assist, an acoustic laminated windshield, and manual seats come standard on the LX. But that trim doesn’t come with folding rear seats or push-button start, so avoid it. The LXS adds those essentials and offers proximity entry, remote start, and Smart Trunk, which automatically pops the trunk after a few seconds when the car is off and you stand near the trunk for a few seconds.

Heated seats are optional on only the next trim, the EX, which is a demerit. Why subject the majority of K5 buyers to cold bottoms? In any case, the EX also has ventilated seats, rear air vents, a Bose stereo system, and the 10-inch infotainment with SiriusXM and UVO link, Kia’s suite of remote services like unlocking, vehicle locator, and the like. The GT, at last, brings paddle shifters plus 19-inch wheels, quad exhaust tips, and the extra performance hardware. The infotainment upgrade has some unique voice command features, such as the ability to switch on the heated seats, and is compatible with Amazon Alexa and Google Assistant.

Equipped with adaptive cruise control (called Smart Cruise Control), the K5 can center itself on marked highway lanes in a semi-automated fashion. It works well even without navigation, which comes with the full Highway Driving Assist. Using this system, the K5 will slow down automatically for curves when a destination is active. 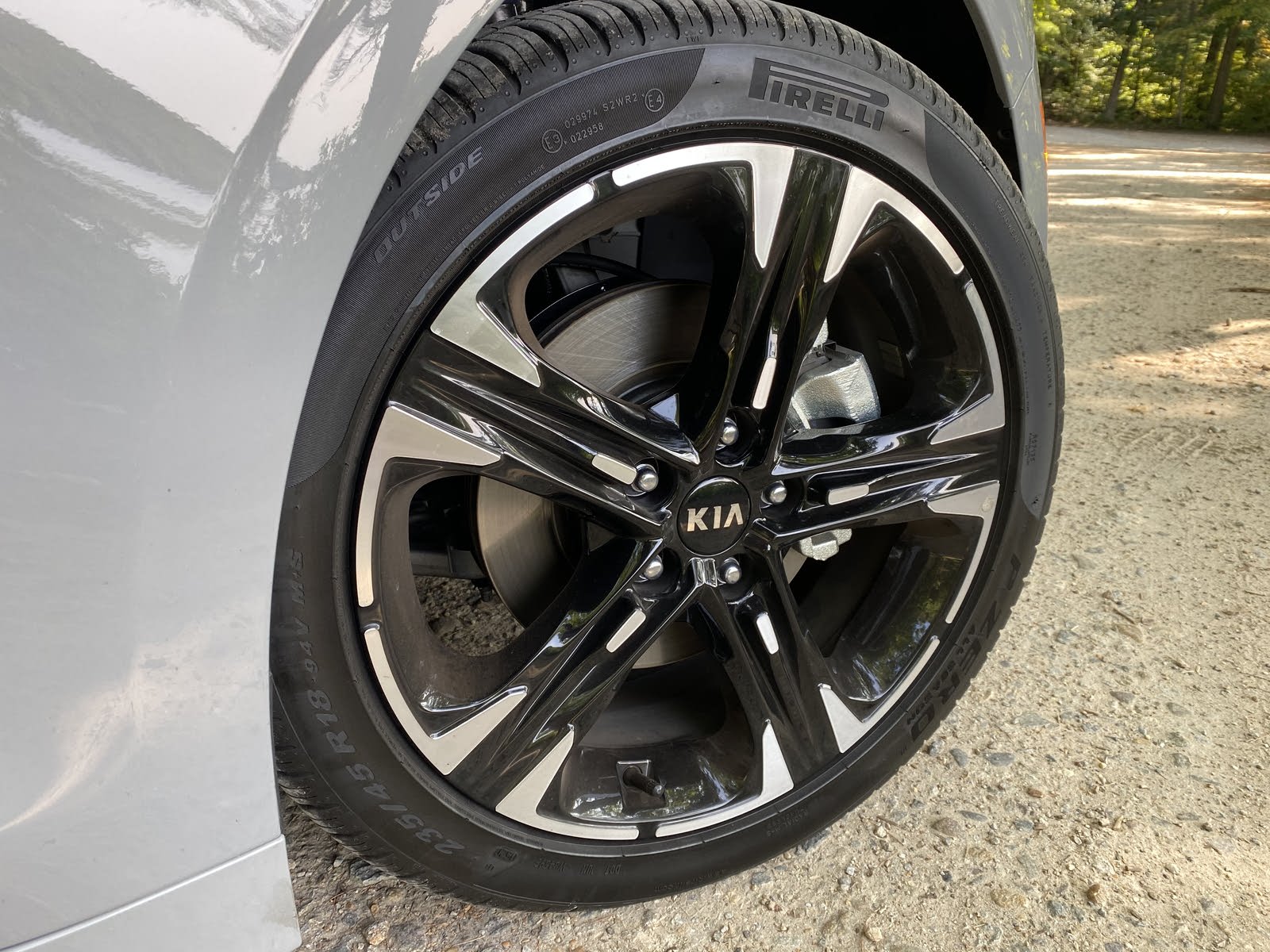 The K5 is too new to be rated by the National Highway Traffic Safety Administration (NHTSA) or the Insurance Institute for Highway Safety (IIHS). We predict top scores all around due to this car’s stronger chassis and body shell. Lots of safety features come standard. Rear side airbags are on every trim, which is a rarity among cars of any price, plus a driver’s knee airbag. Electronic safety aids are standard, too: Forward emergency braking with pedestrian detection, lane-keep assist, and a driver attention monitor. Blind-spot monitoring with Safe Exit Assist, which keeps the rear doors locked if an oncoming vehicle could hit them, are standard on LXS and above. Cyclist detection and Junction Turning, which uses the front radar sensor and cameras to warn if the K5 is about to hit a vehicle in an intersection, is on the GT-Line Premium package. More features, such as rear emergency braking and parking sensors, are on EX and above trims. 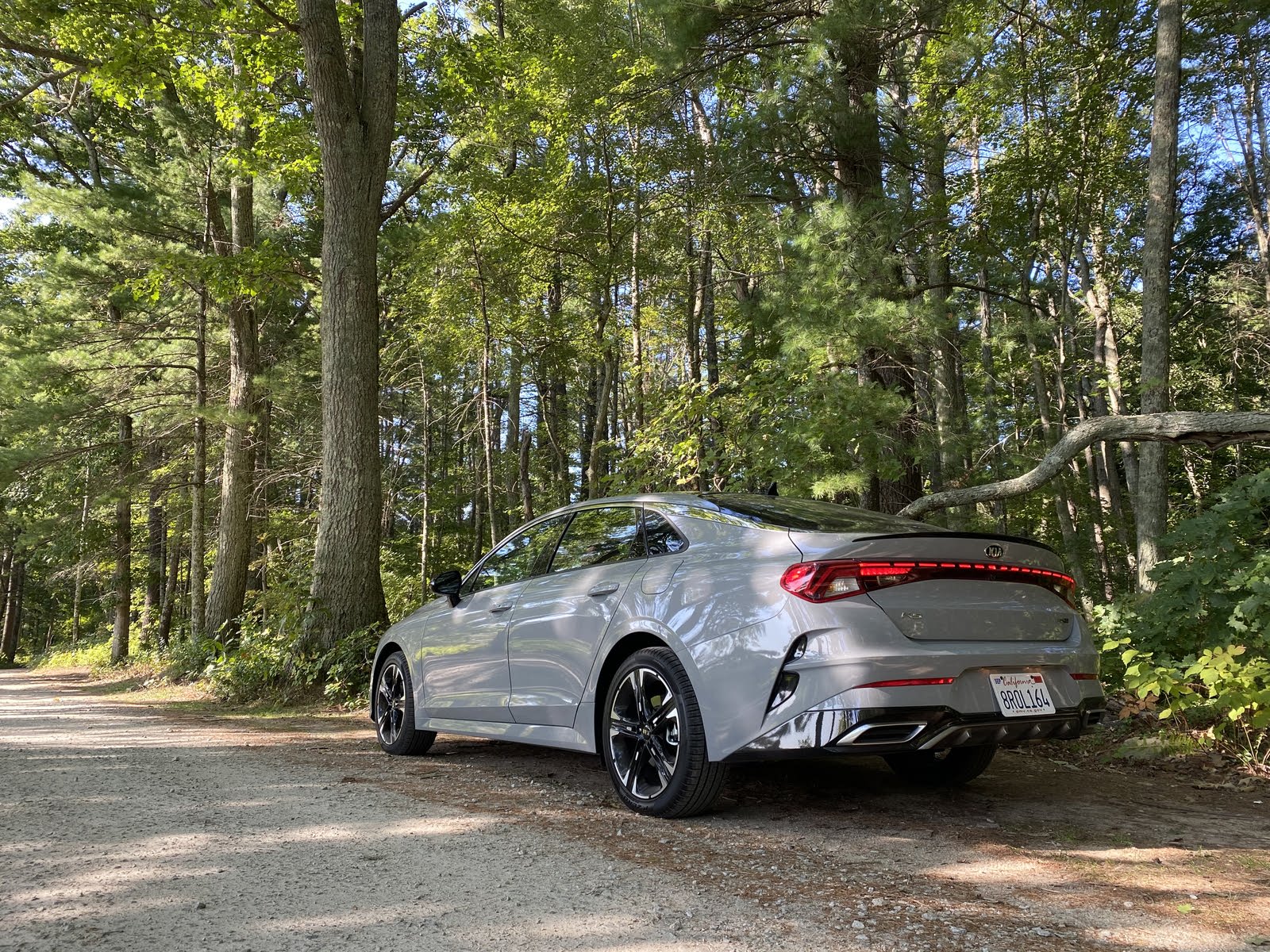 The 2021 K5 starts at $23,490 for the FWD LX and $30,490 for the GT, which will be available in November. Our GT-Line represented the mid-level choice, well-equipped for $28,400 with destination. Even without heated seats, SiriusXM, and pairing a no-name stereo with the base infotainment system, the K5 proved to be a high-quality, very stylish sedan with plenty of space. Kia’s five-year/60,000-mile warranty with roadside assistance is matched only by Hyundai and Jaguar. The value is obvious. But the K5 GT had better be good since it tops 35 grand when optioned out. The regular K5 doesn’t drive as well as the Honda Accord or the Volkswagen Jetta, nor does its performance stand out from the Nissan Altima. Competition is making new sedans so enjoyable to drive that you’ll be mostly impressed as we were with the K5.

Enter your zip to see incentives for a new K5 in your area.

Looking for a Used K5 in your area?

When Will Kia Introduce The K5 Hybrid In The US?