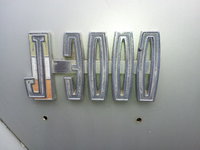 Looking for a New Jeep Gladiator in your area?

Now fortified with a diesel-engine option, the 2021 Jeep Gladiator returns for a second year of battle against midsize pickup trucks like the Chevrolet Colorado, Ford Ranger, and Toyota Tacoma. 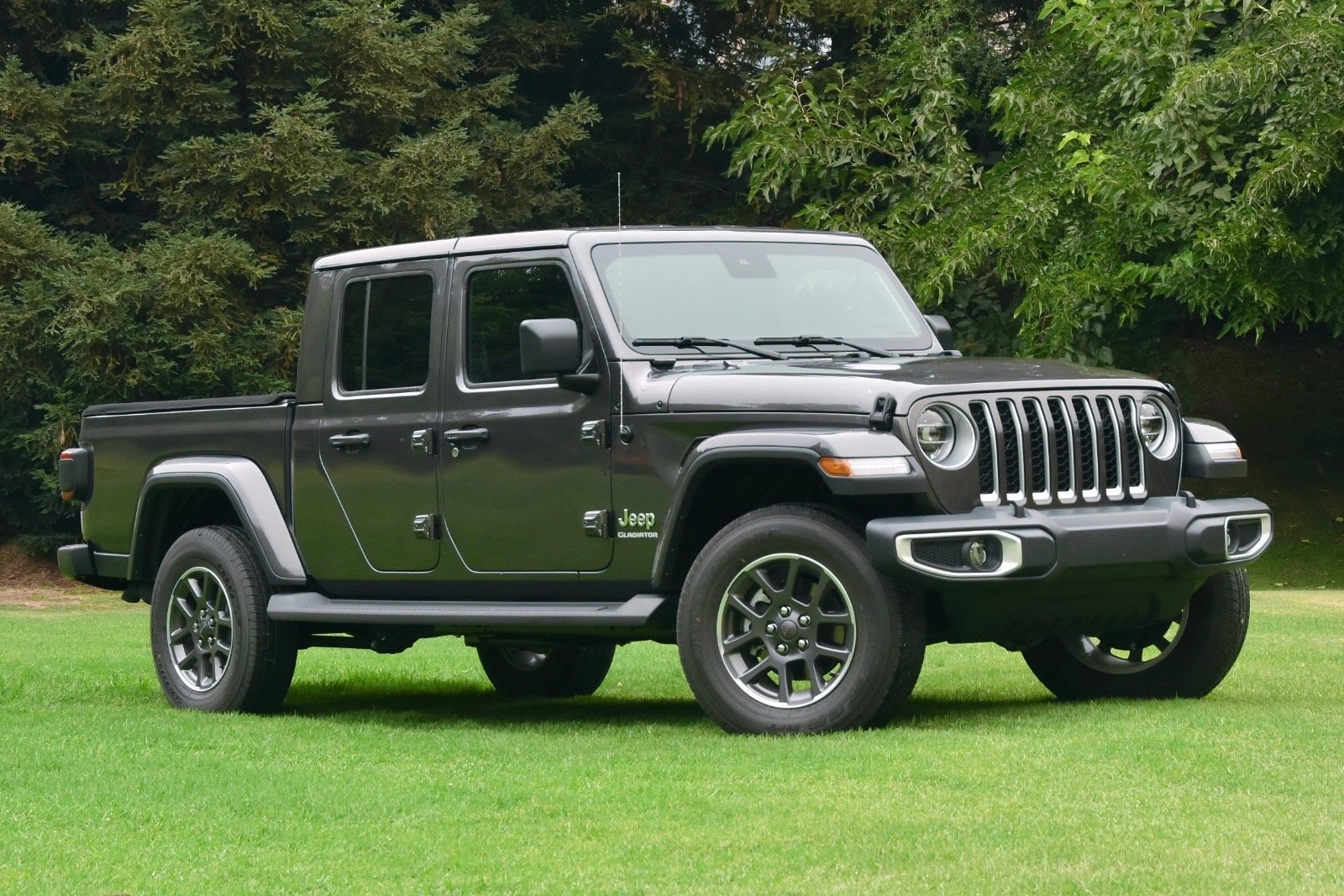 Say what you will about the Wrangler-based Jeep Gladiator, which elicits strong opinions both in for and against it. One thing is certain: you can’t have this much fun working or playing while driving any other midsize pickup truck. From its removable top and doors to its extensive list of aftermarket accessories, the Gladiator offers a combination of practicality, personalization, and promise of adventure like no other truck does. And for the 2021 model year, the good times continue to roll, with a new turbo-diesel engine option, available full-time four-wheel drive, fresh special-edition models, and free scheduled maintenance. To pay for those no-charge oil changes, though, every paint color except for white now costs extra. 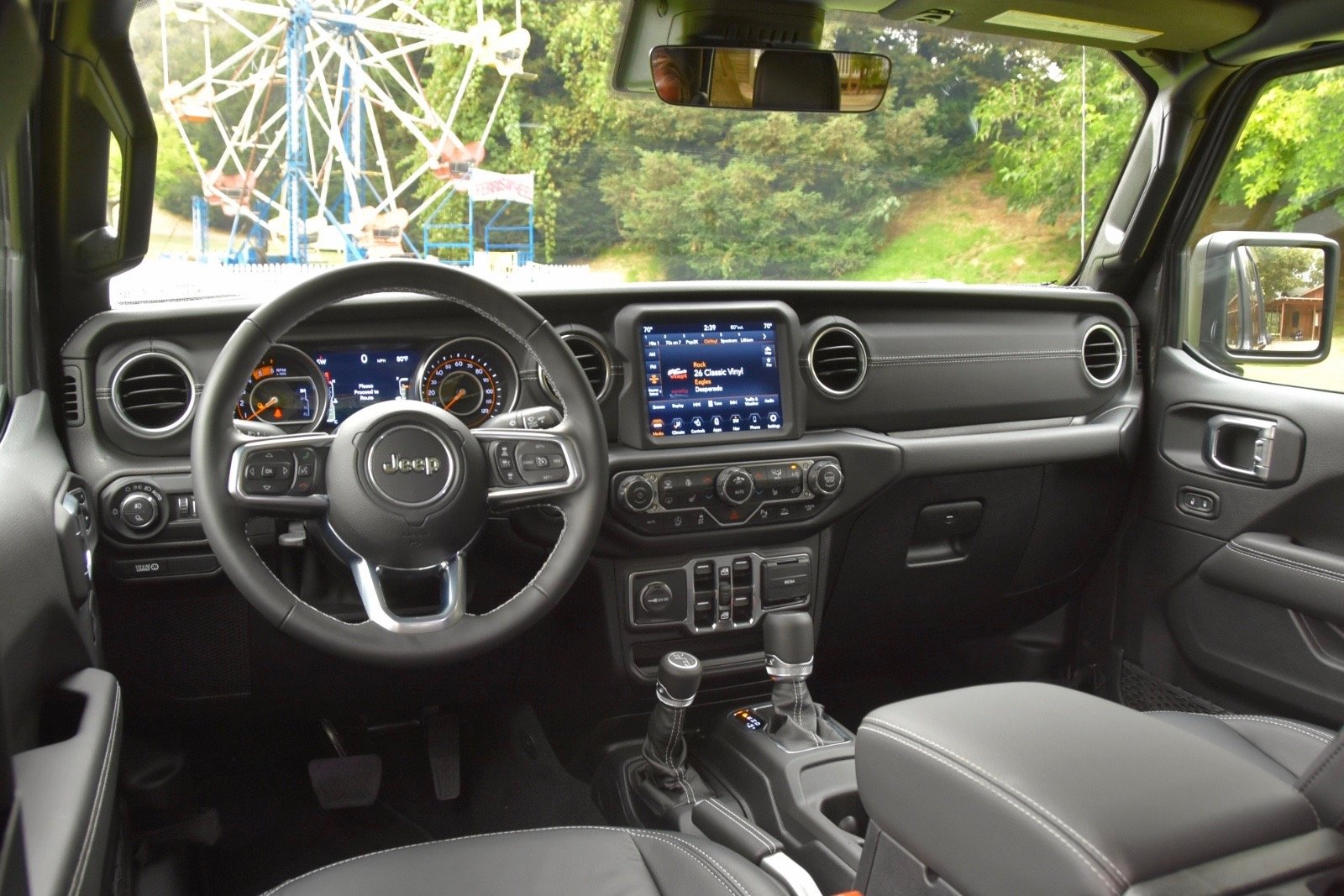 To create the Gladiator, Jeep started with a Wrangler, stretched and fortified the frame for serious towing and hauling, and crafted a short 5-foot cargo bed designed to preserve as much departure angle as possible while still providing the utility midsize pickup buyers need. The result is something special.

Yes, it looks odd. A little too tall, long, and narrow, especially with the Wrangler-based bodywork. Until you get used to the idea, it causes cognitive dissonance. But, to drive the Gladiator is to love it, especially if you take it to far-flung places while inviting the outside in.

Pricing starts at $33,545 for a Jeep Gladiator Sport with a manual transmission, all-season tires, crank ‘em yourself windows, the most basic top, and a radio with a 5-inch display. Our test truck was not entry-level, however. Equipped with Overland trim, it had almost every option box checked, plus the new turbo-diesel engine, which requires an automatic transmission. Including the $1,495 destination charge, the MSRP came to $58,525.

With its optional heated front seats and steering wheel, leather upholstery, and top-shelf infotainment and sound systems, the test truck’s interior was just about as nice as it gets with a Gladiator. But make no mistake. This Jeep remains a vehicle designed to get down and dirty, so durable materials are the rule rather than the exception.

The Gladiator’s cabin is nearly an exact copy of the Wrangler’s, with modifications to the rear seating area. Utility and purpose are the themes, from the manual transfer case lever to the rubber-sealed surround for the touchscreen infotainment display. Naturally, you’ll find Jeep Easter eggs throughout, small design details that, in combination with the Jeep Wave, make you feel like you’re a part of an exclusive club. 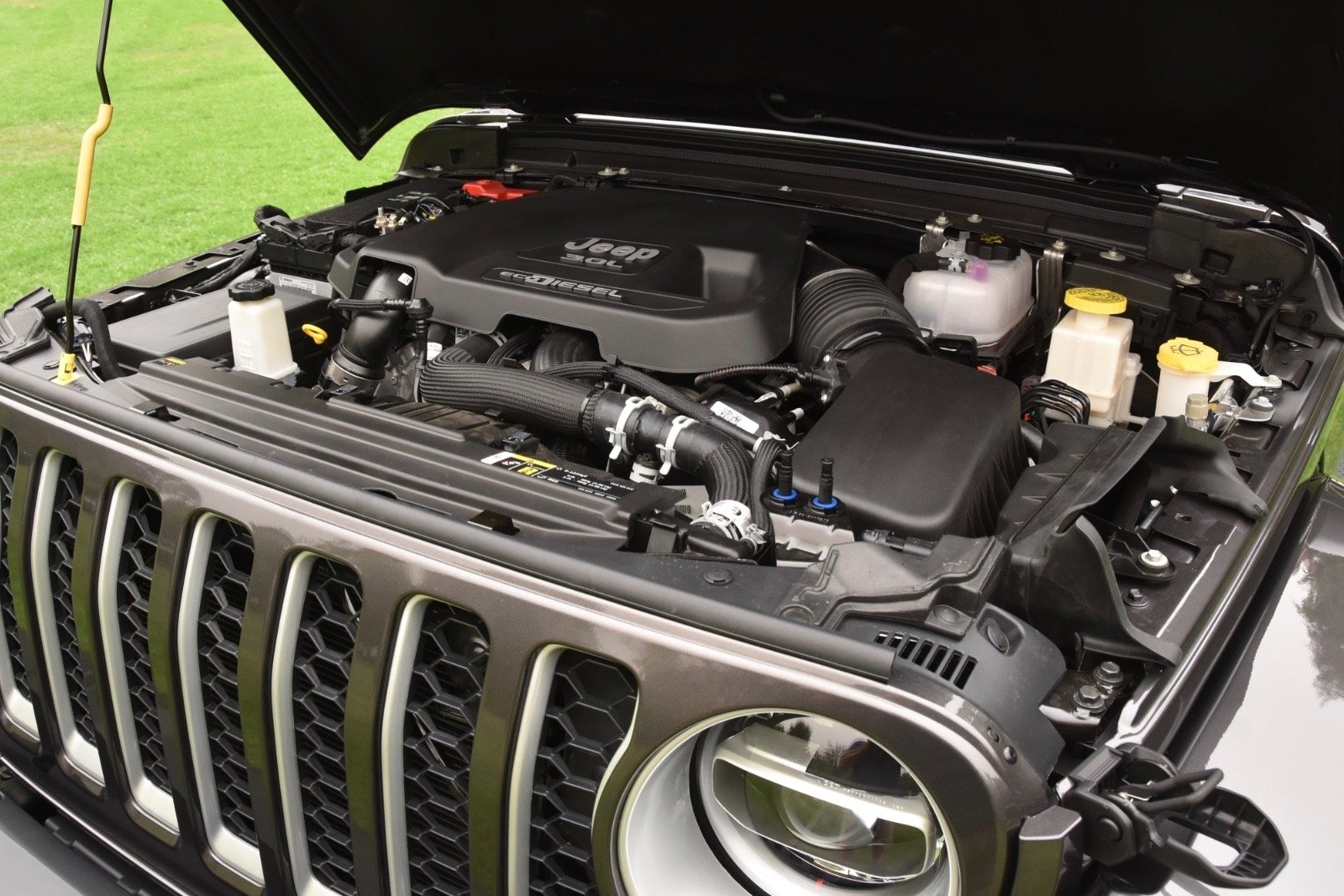 Until now, a 3.6-liter gasoline V6 was the only engine available in the Gladiator. For 2021, a 3.0-liter turbo-diesel V6 is a new option that lightens your bank account by $4,000. You can install it on any version of the Gladiator you want to, except for the Mojave.

Making 260 horsepower at 3,600 rpm and a whopping 442 pound-feet of torque from 1,400 rpm to 2,800 rpm, the diesel delivers substantial low-end grunt while returning noticeably better fuel economy than the gas engine. We averaged 22.6 mpg during testing on a mountainous loop, coming up short of the EPA’s estimated 24 mpg in combined driving. Still, during a 2020 Gladiator Overland test-drive that included mostly highway travel, the truck’s standard V6 returned only 20.3 mpg.

A Gladiator Sport can tow as much as 7,650 pounds with the standard engine, eight-speed automatic transmission, and 4.10 axle ratio. Sport versions can also haul up to 1,700 pounds of payload with that same engine and a six-speed manual transmission.

The turbo-diesel powertrain can’t beat those figures. When it comes to towing, the reason is mainly because of engine-cooling restrictions due to the Jeep-signature seven-slot grille. Nevertheless, the diesel pulls 6,000-6,500 pounds of trailer across applications, matching or besting several of the Gladiator’s other powertrain configurations. And the diesel’s payload capacity is in the same neighborhood as most other Gladiators.

We didn’t tow or haul anything, but we did take a diesel-powered Gladiator Rubicon trim on a challenging off-road course. In this low-speed environment, the stump-pulling torque makes an even better case for itself. In low range, with the Jeep’s Selec-Speed off-road cruise control system engaged, the Gladiator effortlessly tackled tough trails. There is no need for the engine to build revs to access the torque. Like ‘80s crooner Richard Marx, all 442 lb-ft of twist is right there, waiting for you, at just 1,400 rpm.

Driving the diesel-powered Gladiator Overland on a paved loop, the truck exhibited the same charms and aggravations the standard gasoline version does, only with loads of low-end grunt, combined with a muted but characteristic clatter. The steering is relatively slow and sloppy, while the ride is stiff and jouncy. There’s plenty of wind noise on the freeway, and curvy mountain roads are incompatible with the Gladiator’s driving characteristics.

However, this is all a part of this truck’s charm, if you choose to think of it that way. And the turbo-diesel engine simply adds to it. 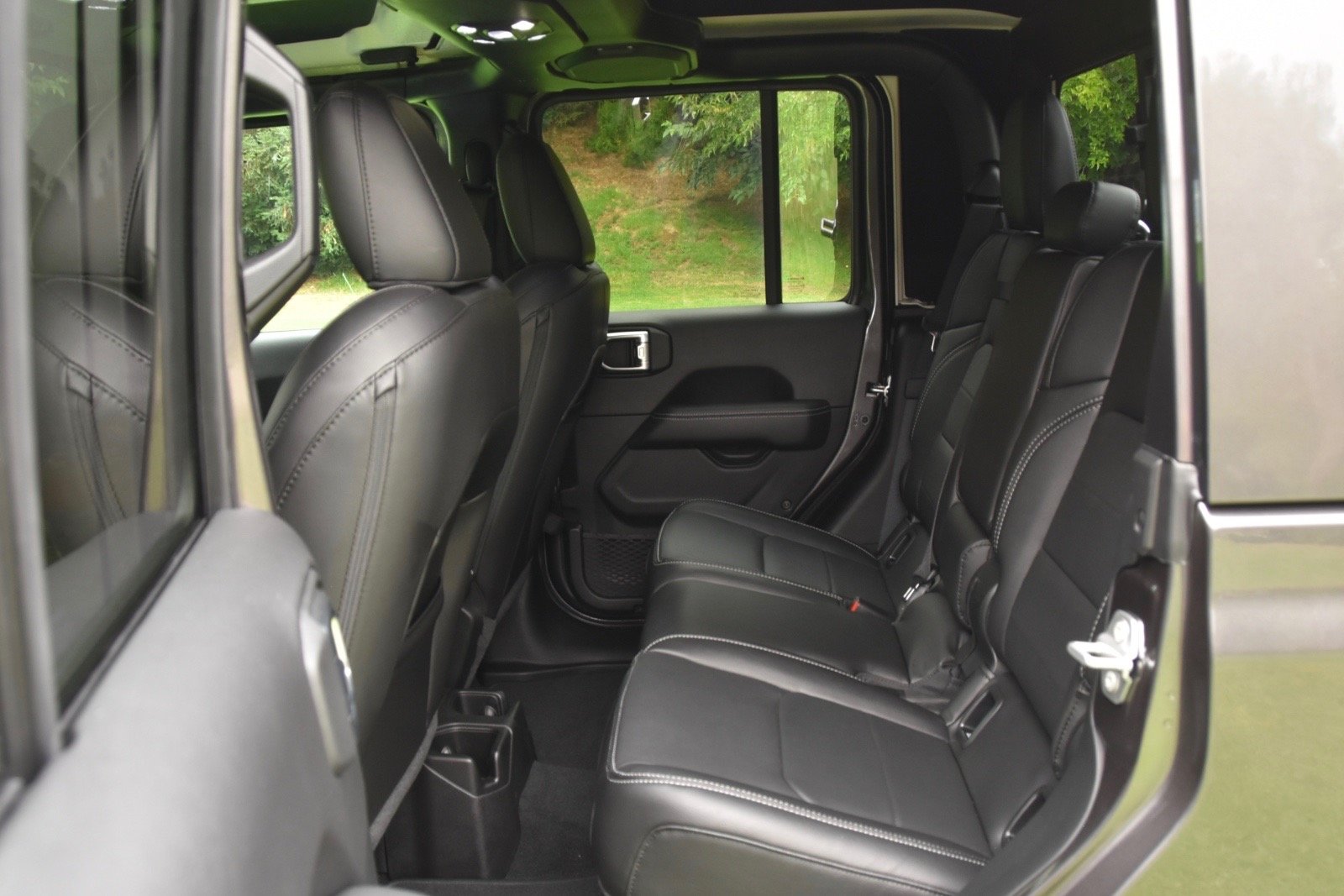 Comfort is not the Gladiator’s reason for being. The seats are agreeable enough, offering proper support front and rear. However, the truck’s small door openings, the snug seating positions within the cab, the driver’s close proximity to the steering wheel and windshield, and the cramped rear legroom all take some acclimation.

Believe it or not, a Gladiator with side steps or rails is more challenging to enter and exit than one without them. They’re mounted high to preserve breakover angle, but this also makes them practically useless, forcing you to step wide and over them to get in and out of this Jeep. If you get the side steps or rails muddy, your clothing will be too.

In-cabin storage spaces include netting on the door panels, a small center console bin under the armrest, cupholders, a dash-top tray, and an (undersized) glove compartment. A locking and removable storage bin under the rear seat is also available.

The Gladiator’s 5-foot steel cargo box is 18 inches deep, holds 35.5 cubic feet of cargo, and includes multiple tie-down hooks. It features an adjustable tailgate that accommodates sheets of plywood lying flat on the wheel wells and the tailgate lip. A spray-in bedliner is available, along with several tonneau covers and a Trail Rail cargo organizer. Aside from the Gladiator Sport’s maximum figure, payload ratings range from 1,075 pounds to 1,535 pounds, depending on trim level, engine, and transmission. 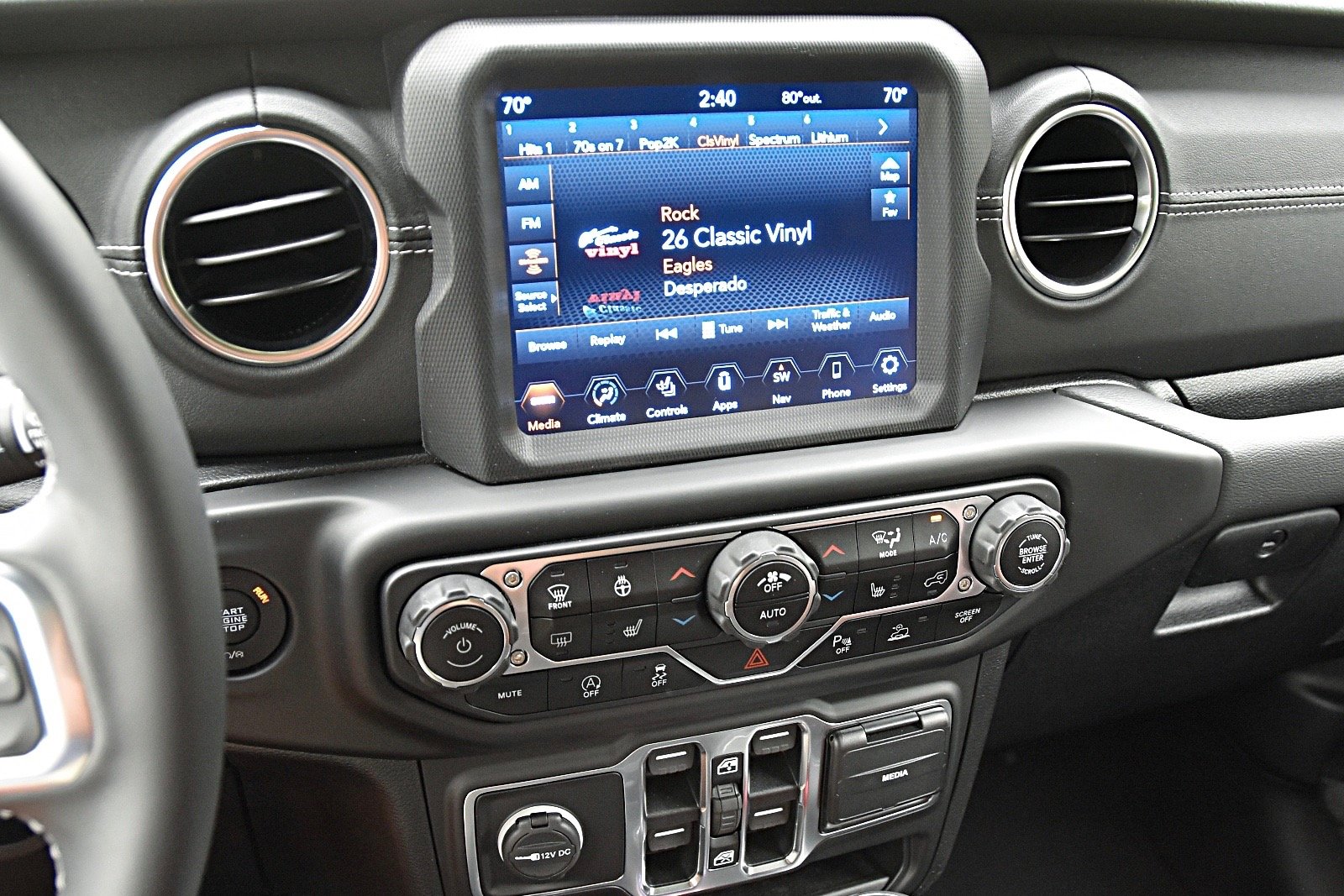 While a Jeep Gladiator is an inherently old school truck, it is not without modern technology. Aside from drivetrain innovations like Selec-Speed, and off-road hardware like an electronic-disconnecting sway bar, the Gladiator offers a comprehensively-equipped infotainment system.

You’ll want to upgrade beyond the standard FCA Uconnect 3 setup with the 5-inch display. It does come with Bluetooth, voice text reply for Android devices, and SiriusXM satellite radio. But the optional Uconnect 4 system with a 7-inch touchscreen display is superior. It’s standard starting with Sport S trim and equips the truck with Apple CarPlay and Android Auto.

The test truck had the top-shelf Uconnect 4C system, with an 8.4-inch touchscreen and navigation. It supplies SiriusXM Guardian connected services, including emergency assistance and calling, remote engine starting, and a WiFi hotspot. An Alpine premium sound system comes with this infotainment system, which also includes an Amazon Alexa skill.

Equipped with large volume and tuning knobs, and a user-friendly interface, Uconnect 4C is easy enough to use, but the underlying technology is aging. Relatively slow system load and response times provide evidence, as well as voice recognition technology that requires specific prompts during use. Despite these emerging criticisms, however, it remains intuitive and straightforward.

For 2021, Jeep offers its forward-facing Trail Cam with the Overland trim level for the first time. We used it during our off-road adventure in the Gladiator Rubicon, and it works well to help drivers know what they don’t know about what lies ahead and out of sight due to the hood obstructing the view. It also assists drivers in picking a path around and over obstacles ahead. 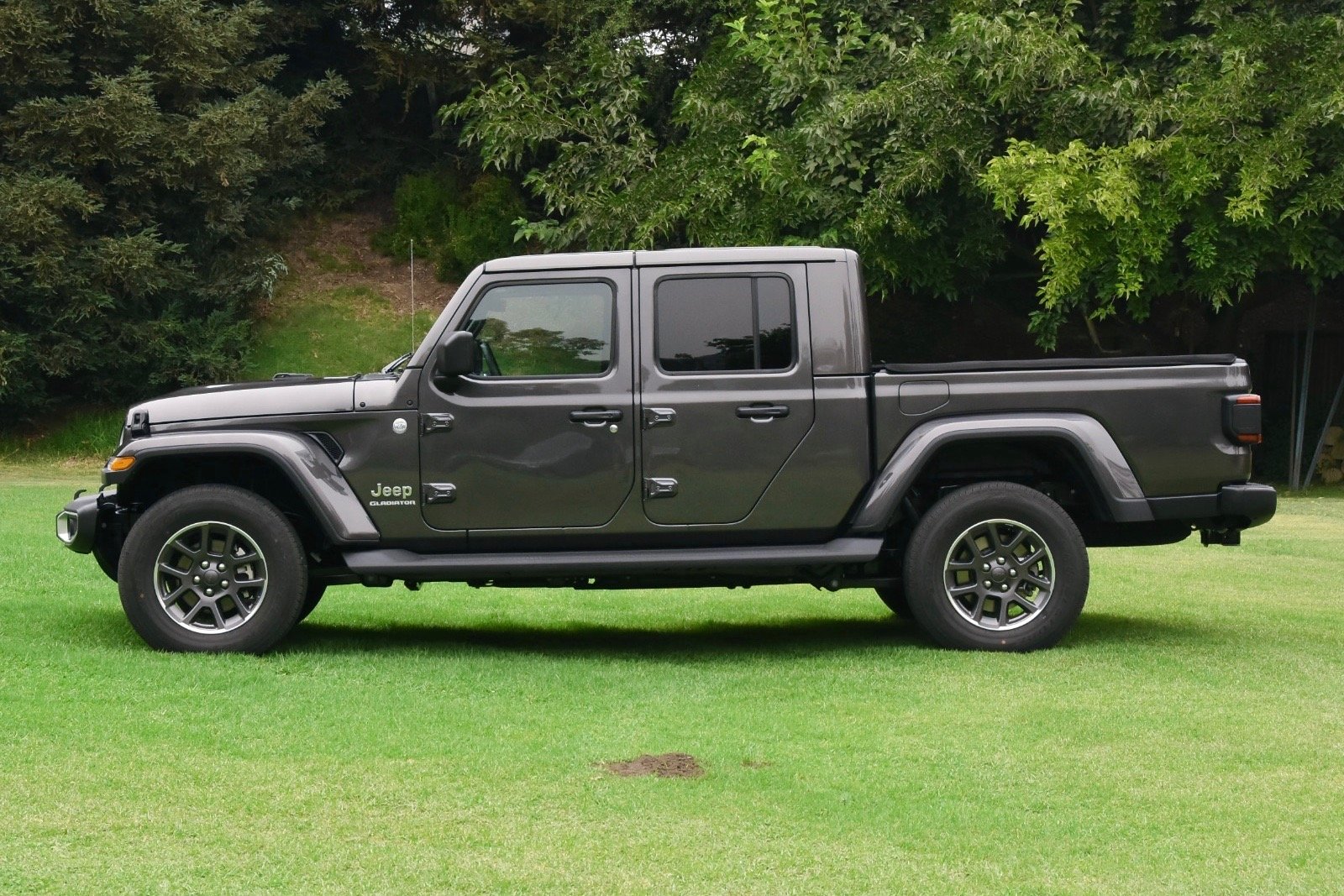 In standard specification, the Gladiator is simple in terms of safety systems. You get a reversing camera and not much else. Depending on the trim level and other equipment, you can upgrade the truck with advanced driving assistance systems (ADAS) such as adaptive cruise control, forward collision warning, automatic emergency braking, blind-spot monitoring, rear cross-traffic alert, and automatic high beams.

Our test truck had all of these features. You’ll definitely want the blind-spot monitoring technology, in part because the Gladiator’s side mirrors are narrow. The adaptive cruise control worked well during a short examination on the freeway, and Jeep thoughtfully offers both adaptive and standard cruise control, just in case you’re uncomfortable with the system’s software handling distance management.

As this review is published, just a couple of crash-test results are available for this truck. The National Highway Traffic Safety Administration (NHTSA) gives it a four-star frontal-impact rating with the standard gasoline engine, and the rollover resistance rating is three stars regardless of engine selection. 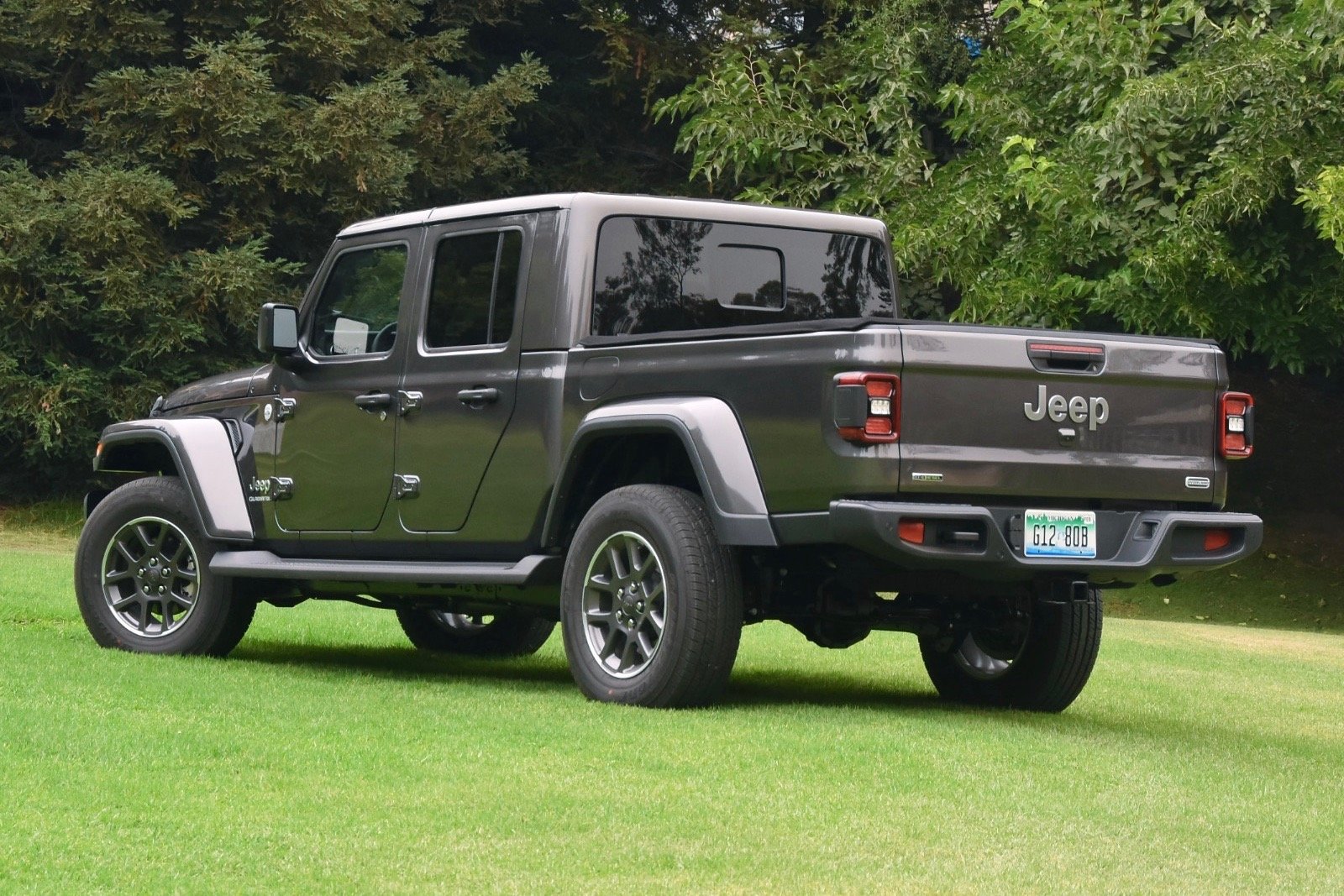 A Jeep Gladiator is not a cost-effective solution to your midsize pickup-truck needs, even if it now comes with free scheduled maintenance during the first three years or 36,000 miles of ownership. It is expensive to start with, and upgrades add up fast.

The value in this truck lies in its appeal to lifestyle owners who want a Jeep, who love the Wrangler for its open-air sense of freedom and take-no-prisoners off-roading capability, and who prefer a cargo bed instead of a cargo area. For this type of truck buyer, the Gladiator is perfect.

But if you just need a midsize pickup truck, or if the Gladiator’s styling and capabilities don’t fit your preferences and requirements, there are more cost-effective choices in the segment.

What's your take on the 2021 Jeep Gladiator?

Pingram1285 There are so many awesome features on the gladiator. It drives great, the technology is awesome, the sound system for the base platform beat my expectation, I love my new gladiator

Have you driven a 2021 Jeep Gladiator?
Rank This Car

Enter your zip to see incentives for a new Gladiator in your area.

Looking for a Used Gladiator in your area?

Where Do I Get Service?

Do I have to drive to west Virginia for routine service?

Are There Any Jeep Rebates