Looking for a New Cadillac Escalade ESV in your area? 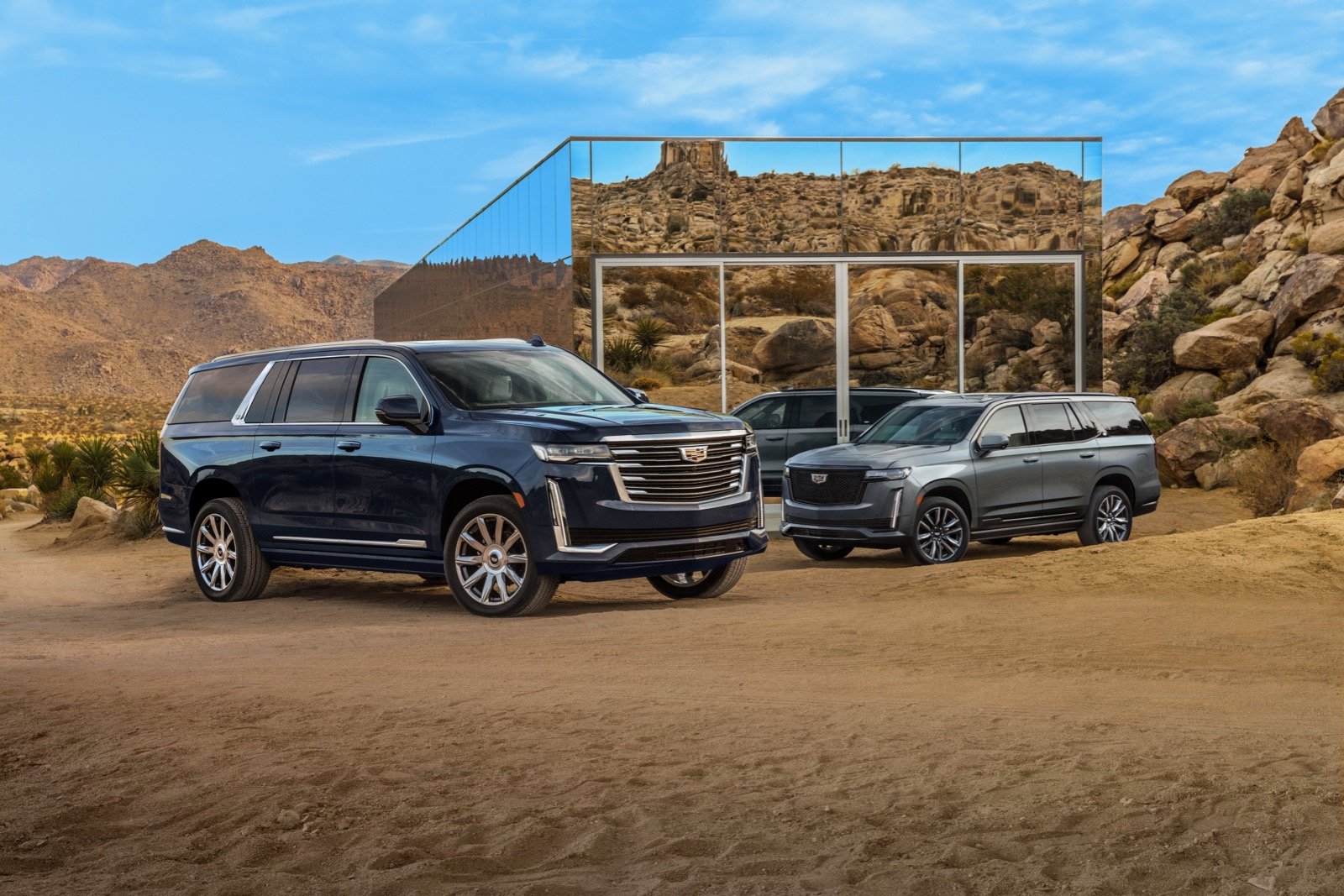 The Cadillac Escalade isn't just a luxury family hauler. It's one of the most high-tech SUVs you can buy today. In its Escalade ESV format, the model offers buyers more cargo room but keeps passenger space nearly the same. Though it's longer and heavier, the Escalade ESV has a secret: it's actually better to drive than its little brother. 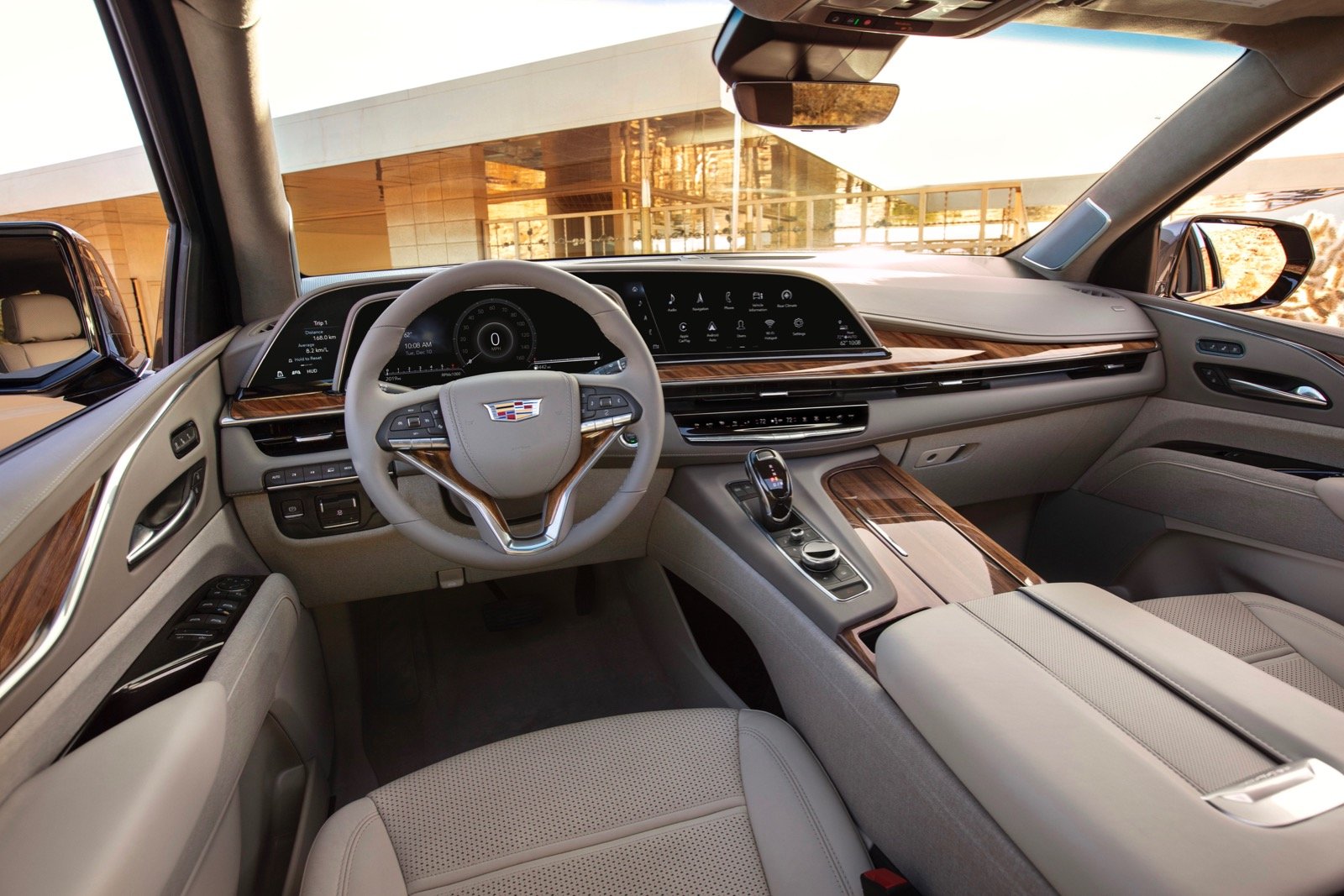 The Escalade ESV is the extended version of the typical Cadillac Escalade. As such, it was included as part of the complete redesign that the Escalade went through for the 2021 model year.

There are a few key differences between the Escalade and Escalade ESV. For starters, the Escalade ESV is longer—226.9 inches to the Escalades 211.9 inches. It’s also a smidge lower (76.4 inches versus 76.7 inches). The Escalade ESV’s length is added at its back end, where it increases cargo space.

Cadillac has also lengthened the wheelbase of the new Escalade for the ESV version giving it 134.1 inches of space between axles as opposed to the Escalade’s 120.9 inches. The added length increases the SUV’s stability on the road and helps with design proportions, giving the Escalade the ESV the look of a big SUV rather than a large SUV with a dumpy backside.

The result is a good-looking and posh vehicle. There’s a proper amount of chrome styling on the Luxury, Premium Luxury, and Premium Luxury Platinum trim levels while Sport and Sport Platinum grades get blacked out exterior accents including grille and window surrounds.

Like with the wheels, the grille of the Escalade changes with nearly every trim level, from cross-hatch to bars to platinum Galvano designs.

Cadillac sells the luxury SUV with a number of packages that add to the exterior and interior features of the vehicle including the Illumination Package ($1,095) and Onyx Package ($2,295). Certain packages are only available on certain trim levels.

The interior of the Escalade ESV is far less posh, especially in lighter color schemes where the universality of General Motors switches, buttons, and knobs puts a spotlight on what this model doesn’t get right. Hard plastics abound in the dual-cockpit setup of the Escalade ESV but not in the attractive way that Mercedes-Benz gets away with by fancying them up with unique patterns and edging. There’s nothing about the dashboard area trimmings that is special, a feature that a vehicle that retails for near or above $90,000 in most configurations should have. 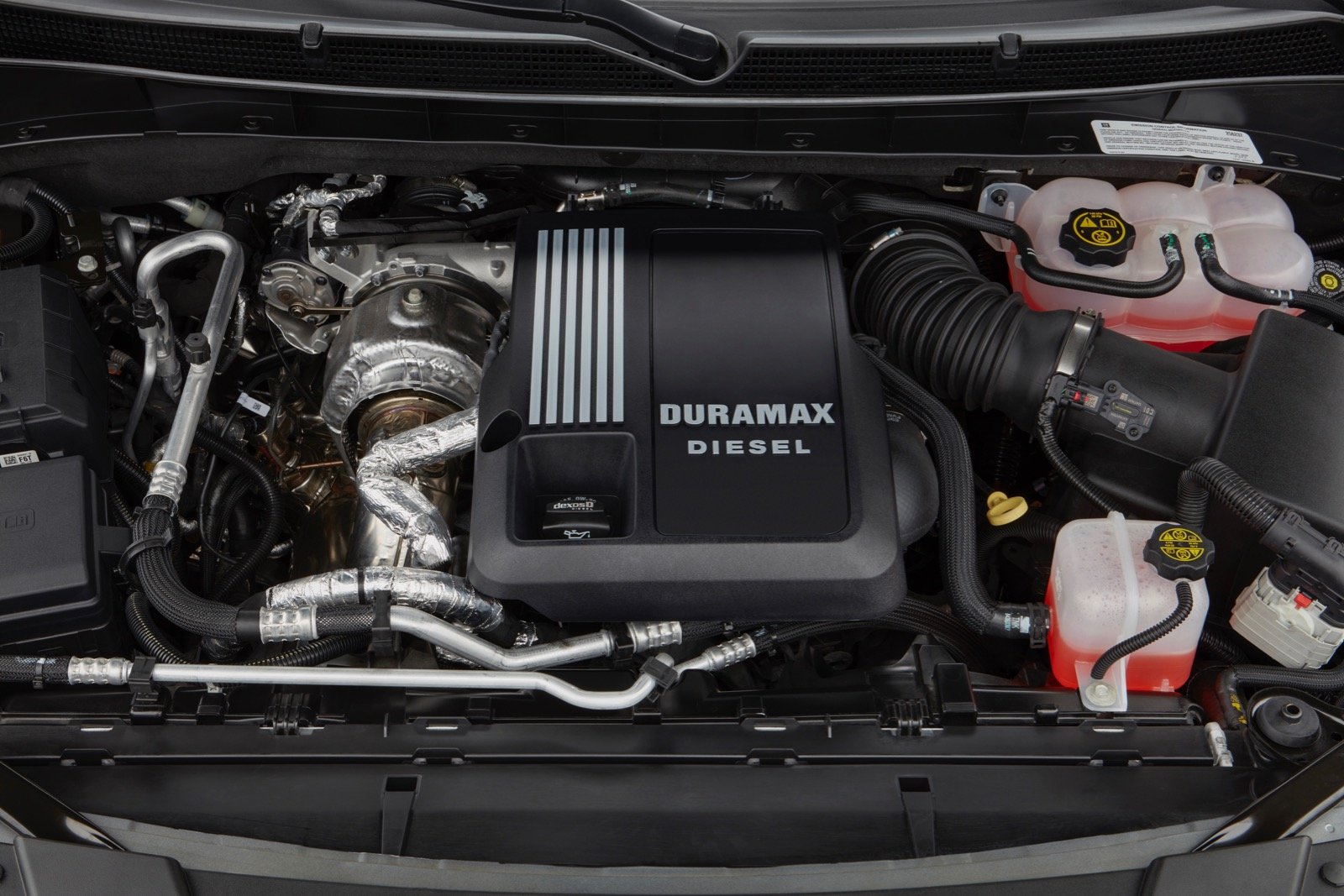 Cadillac offers the 2021 Escalade ESV with the buyer’s choice of either a 6.2-liter V8 or a 3.0-liter Duramax turbodiesel inline-six engine. The gasoline power plant is standard on all trim levels and delivers 420 horsepower and 460 pound-feet of torque. The available diesel delivers 277 hp and 460 lb-ft of torque. Both engines are paired with a 10-speed automatic transmission.

Cadillac sells all Escalade ESV grades with either rear-wheel drive (RWD) or four-wheel drive (4WD), which are compatible with both powertrains. A mechanical limited-slip differential is standard. An electronic version is available in higher grades.

Unlike in the Cadillac Escalade, in the Escalade ESV, buyers do not have to pay a premium for the diesel engine. Pricing of the models is trim-level- and package-dependent instead.

The tester came equipped with the V8 engine, which delivered sufficient power but could have used more low-end torque when passing at higher speeds. There’s no doubt that the Escalade ESV is a big gal (5,785 to 6,182 pounds, depending on trim level), but it’s easy to see how the engine could struggle at speed when towing.

The EPA hasn’t rated the Escalade ESV for fuel economy but has done the traditional Escalade, which gets an EPA-estimated low of 17 mpg combined and a high of 23 mpg combined. RWD versions are more efficient. During a week of testing that epitomized combined driving situations including some idle time, the RWD Escalade ESV tester was averaging around 18 mpg—far better than what was anticipated. 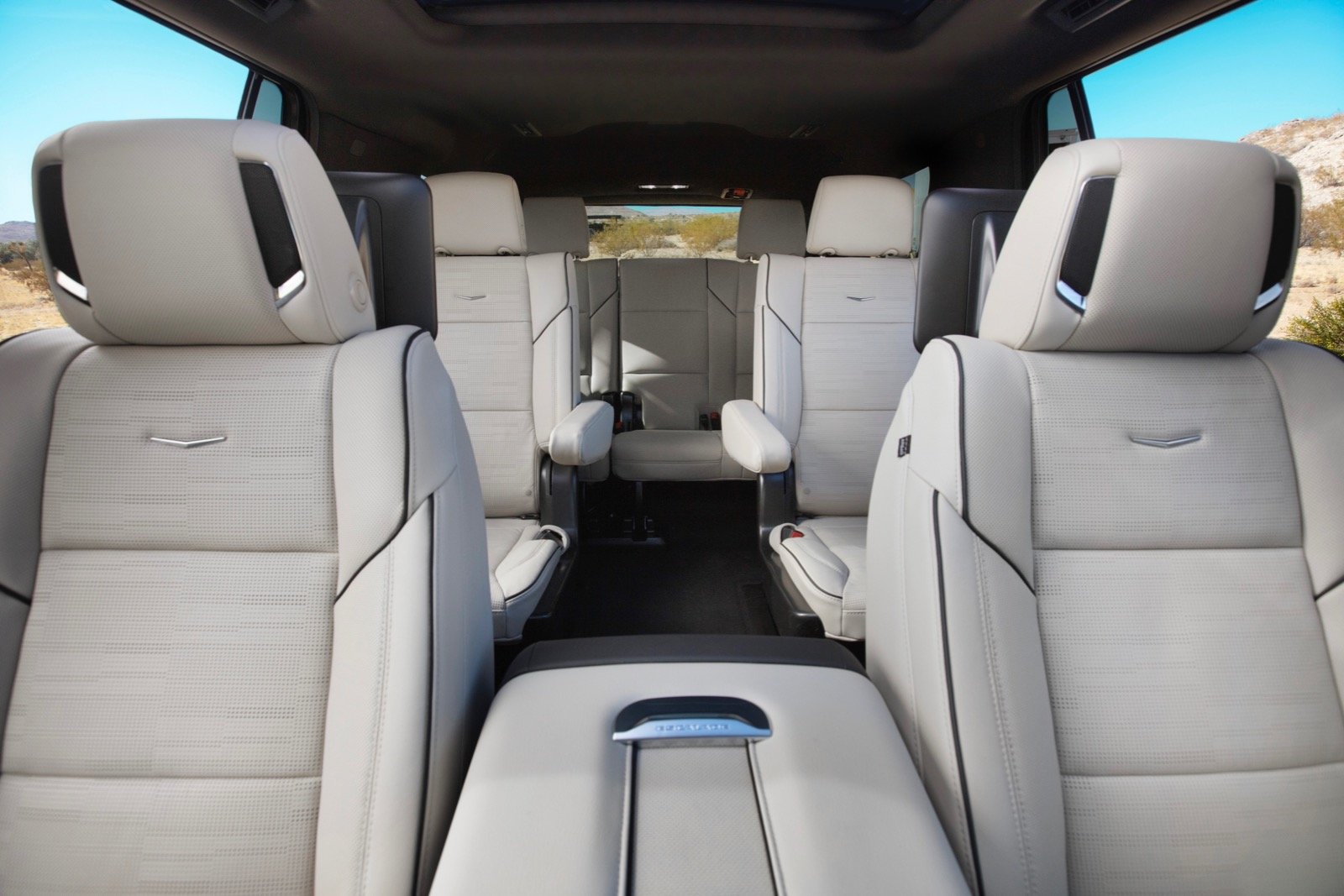 The Escalade ESV is designed to be a comfortable, plush people and cargo hauler and it checks most of the boxes with ease but the devil is in the details.

The seats are comfortable enough and certainly provide more bottom cushion comfort than anything that’s come from BMW lately. Skinnier bottoms will find themselves shifting around on the seats as the Cadillac goes around corners and its body leans. Overall ride quality is good, however.

Legroom in the first two rows of seating is good and the third row is no slouch either. Still, adults won't want to be relegated to the rear too often.

The ESV is designed to deliver a first-class experience. That includes a bevy of climate-control functions. However, there’s no way for the driver to decide if they want to utilize the heated seats. The technology decides for you. Long trip and your back aches? Prefer toasty buns and cool arms at the same time? You don’t get to make that decision for yourself.

To fold the power-adjustable third row in the Escalade ESV, you use a switch in the cargo area. The Escalade ESV isn’t set up to have the third row fold no matter what. It’s easy to get it stuck on the second-row seat and have to walk up to the second row to shuffle those seats forward.

The car’s hands-free power liftgate works about 50 percent of the time. At night, a Cadillac logo shines on the ground as you walk up in the liftgate with the key fob near, showing the exact place to do the motion that makes the liftgate raise. It’s brilliant. In the daytime it’s a bit more frustrating, especially since the Escalade ESV does not have a physical latch release—instead, you have to use the fob.

Cadillac does offer the fifth-generation Escalade with a rear window that opens. The window goes out and up, raising to offer drop-in storage or the ability to carry long items like lumber or a rug home without having to get a truck or trailer.

An adaptive air suspension makes getting in and out of the vehicle easier. It also assists when working to avoid obstacles or deep puddles.

Cadillac also offers the ESV model with upscale features like a center console that turns into a cooler. 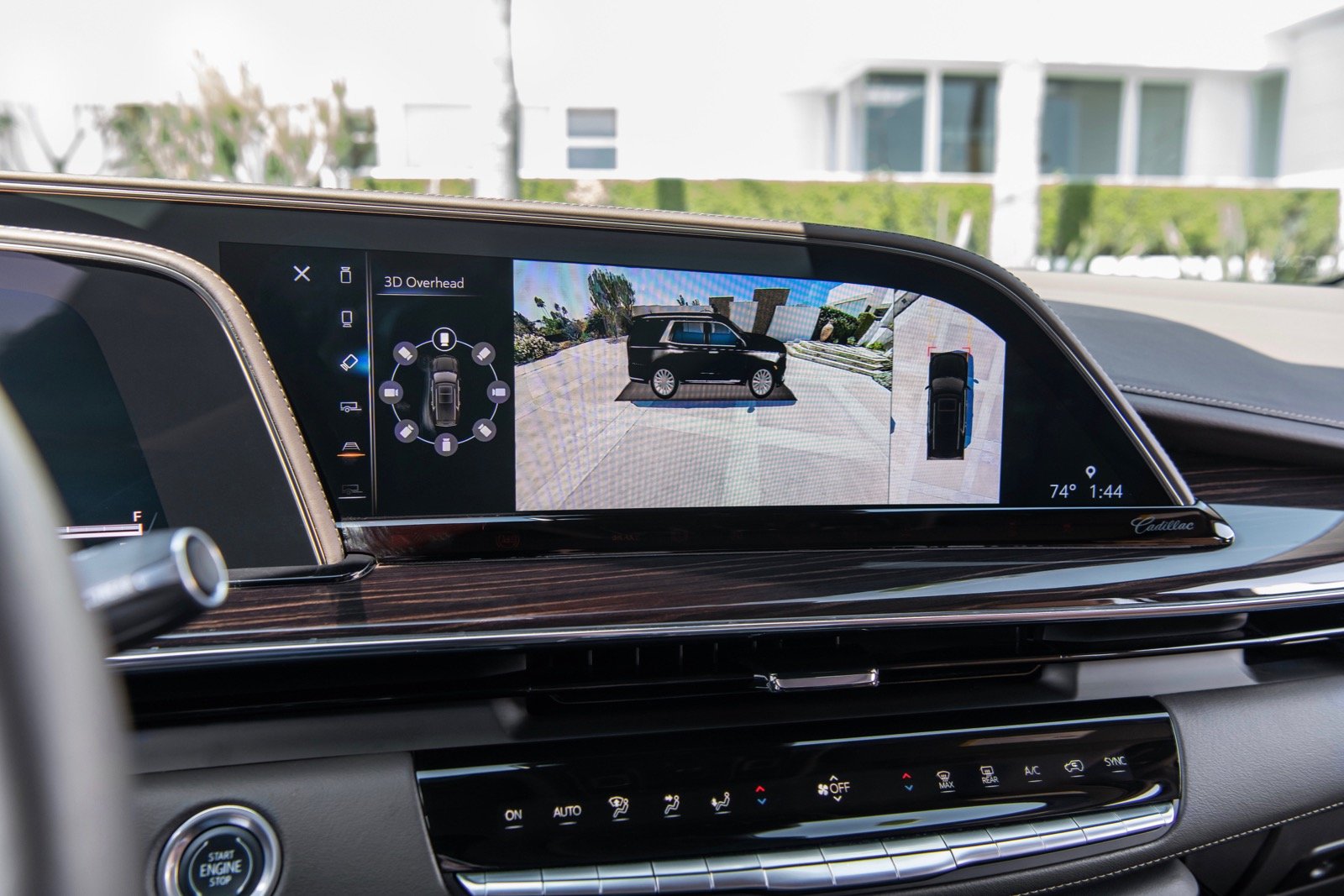 Technology is the highlight of the Escalade. Not all of it is perfect, but it’s better than most everything else on the market today.

Cadillac gives buyers a standard 19-speaker AKG sound system and they have the ability to upgrade to a 36-speaker AKG Studio Reference audio system that delivers an immersive sound experience that’s clearer and better balanced than most modern systems.

The crisp quality of the graphics on the infotainment screen is unparalleled. The touchscreen is quickly responsive and system menu layers are intuitive.

Cadillac has begun making Super Cruise, an advanced driving assist system (ADAS) available on the Escalade. Super Cruise allows drivers to keep their eyes on the road but hands off the wheel on about 200,000 miles of roadway in North America (mostly highways). New for 2021, Super Cruise has an automatic lane change feature. This allows a driver to signal a lane change and then allows the vehicle to automatically perform the function if proper conditions are met for the lane change to occur.

The lane-keeping, lane-centering, and adaptive cruise control aspects of Super Cruise work nearly flawlessly. There are occasions where bright sunlight or the sudden presence of darkness (such as poorly-lit tunnels) causes it to stop working, but those are few and far between. Where Super Cruise struggles the most is on roadways where construction has occurred within the last year or so. Even when the work is complete, cleaned up, and back to regular operations, the system hasn’t caught up with the fact that this has occurred and Super Cruise cancels itself from operation.

The lane-change technology works as advertised. However, it doesn’t always happen quickly, even when the proper conditions are met. In heavy traffic, the system seems to have to work overtime to establish if it is an okay procedure when a gap in traffic occurs whereas many drivers would get over and get up on the gas to make it work.

When making lane changes in traffic, often the car’s acceleration seems to be missing the oomph that is desired to make the maneuver without disturbing the traffic surrounding the Escalade ESV.

Sometimes Super Cruise will fail and require that the driver takes the wheel immediately. When Super Cruise quits, it doesn’t just quit. It cancels all lane-keeping and cruise control functionality along with it. This means that in traffic, a driver can suddenly find themselves with a rapidly slowing vehicle at a moment’s notice. A red light flashes from the steering wheel, there’s an audible indicator, and the driver’s seat vibrates as a way of alerting the driver that this failure is happening.

To regain control of the vehicle in accordance with how the tech wishes a driver to do so, the driver must both step on the gas pedal and steer. If on a straight road, this might mean wiggling the wheel in the lane to get the sensor to read the result. Then, the driver can go about resetting all their cruise control functionality.

Despite all of this, Super Cruise is worth its weight in gold if you’re a driver who spends a good amount of time on the highway. 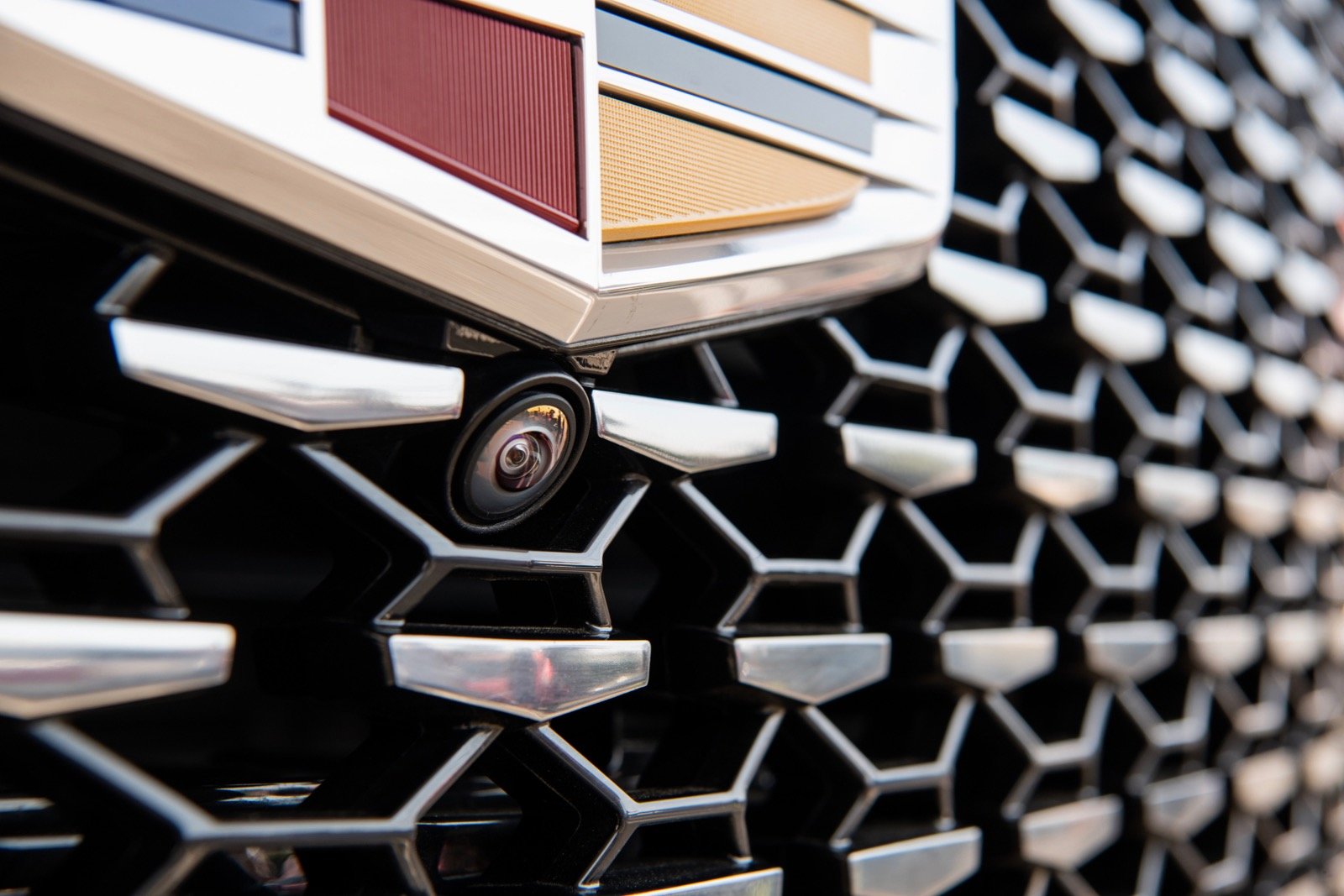 The Insurance Institute for Highway Safety (IIHS) has not tested the 2021 Cadillac Escalade nor the Escalade ESV.

The National Highway Traffic Safety Administration (NHTSA) gave the Escalade ESV a four-star rating out of five stars. The Escalade ESV performed well in all crash tests except the rollover test where it scored a three out of five. This means that the top-heavy Escalade ESV is at greater risk of a rollover collision than other vehicles, an expected outcome. 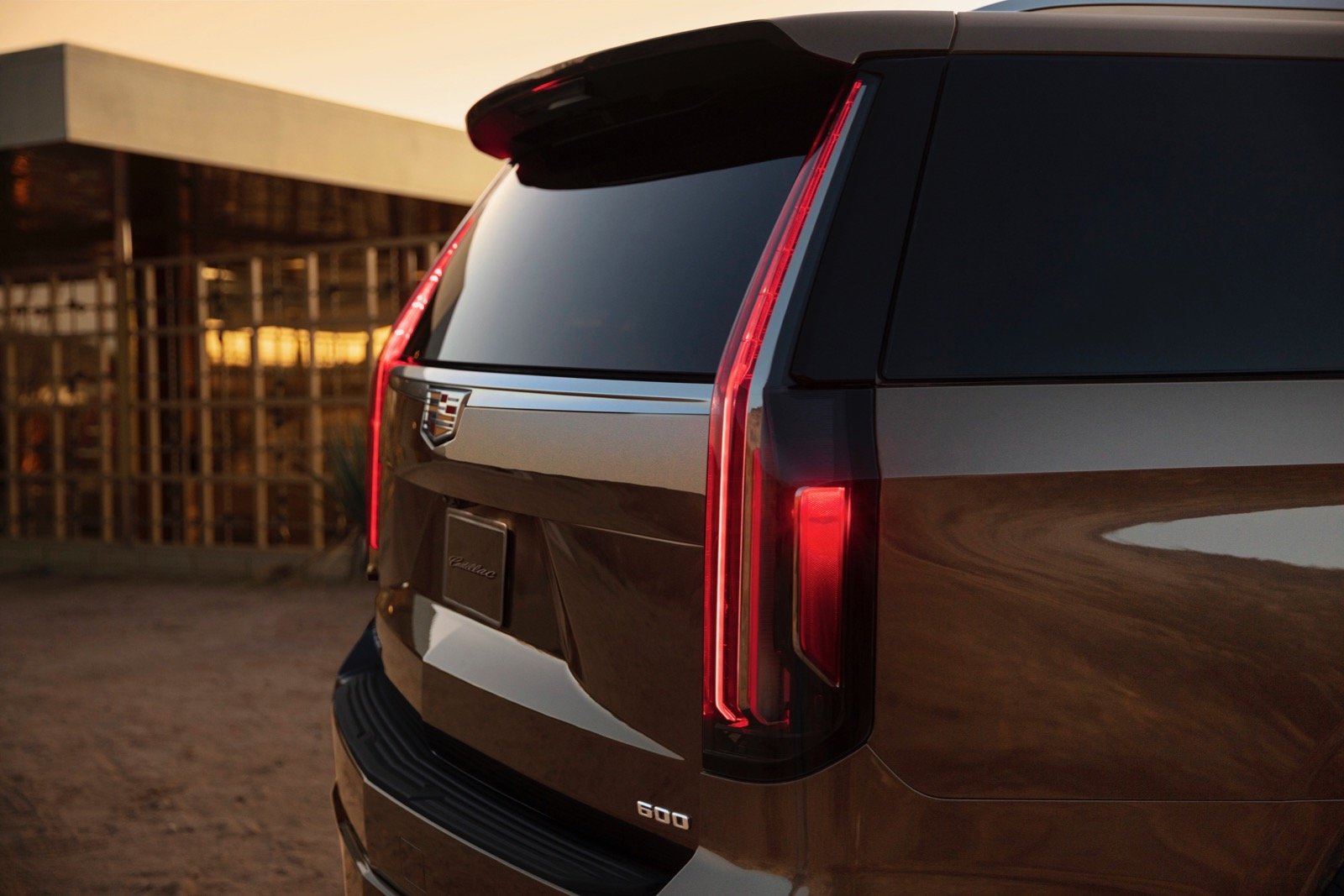 The 2021 Cadillac Escalade ESV has a starting MSRP of $80,890 and goes up close to $130,000 with all the options boxes checked. That’s no small chunk of change, but it is in line with what the competition charges.

Cadillac has designed the Escalade ESV for a very specific customer. It’s not the most refined out there, but these folks like to get it done in style and comfort. For them, the Escalade ESV is a better choice than the Lincoln Navigator because of the Caddy’s high-tech features.

If you don't want Super Cruise and are looking to spend less, the GMC Yukon XL is a really good option. It is offered in the same engine variants as the Escalade ESV and rides on the same stable platform.

For a more rugged-looking people hauler, choose the Chevrolet Suburban. It's not as sophisticated as the Escalade ESV but the Chevy shares a platform with the Yukon and Escalade making its ride and handling similar.

The Escalade ESV is worthy of your dollars if you truly want more cargo room in your Escalade. Super Cruise is worth the extra $2,500 and if you journey on poorly lit country roads or trails at night, opting for Night Vision for an extra $2,000 is worth the expense as well.

What's your take on the 2021 Cadillac Escalade ESV?

Have you driven a 2021 Cadillac Escalade ESV?
Rank This Car

Enter your zip to see incentives for a new Escalade ESV in your area.