Looking for a New BMW X5 in your area?

The upscale BMW X5 is a family-friendly SUV that combines powerful engine options with a refined interior. 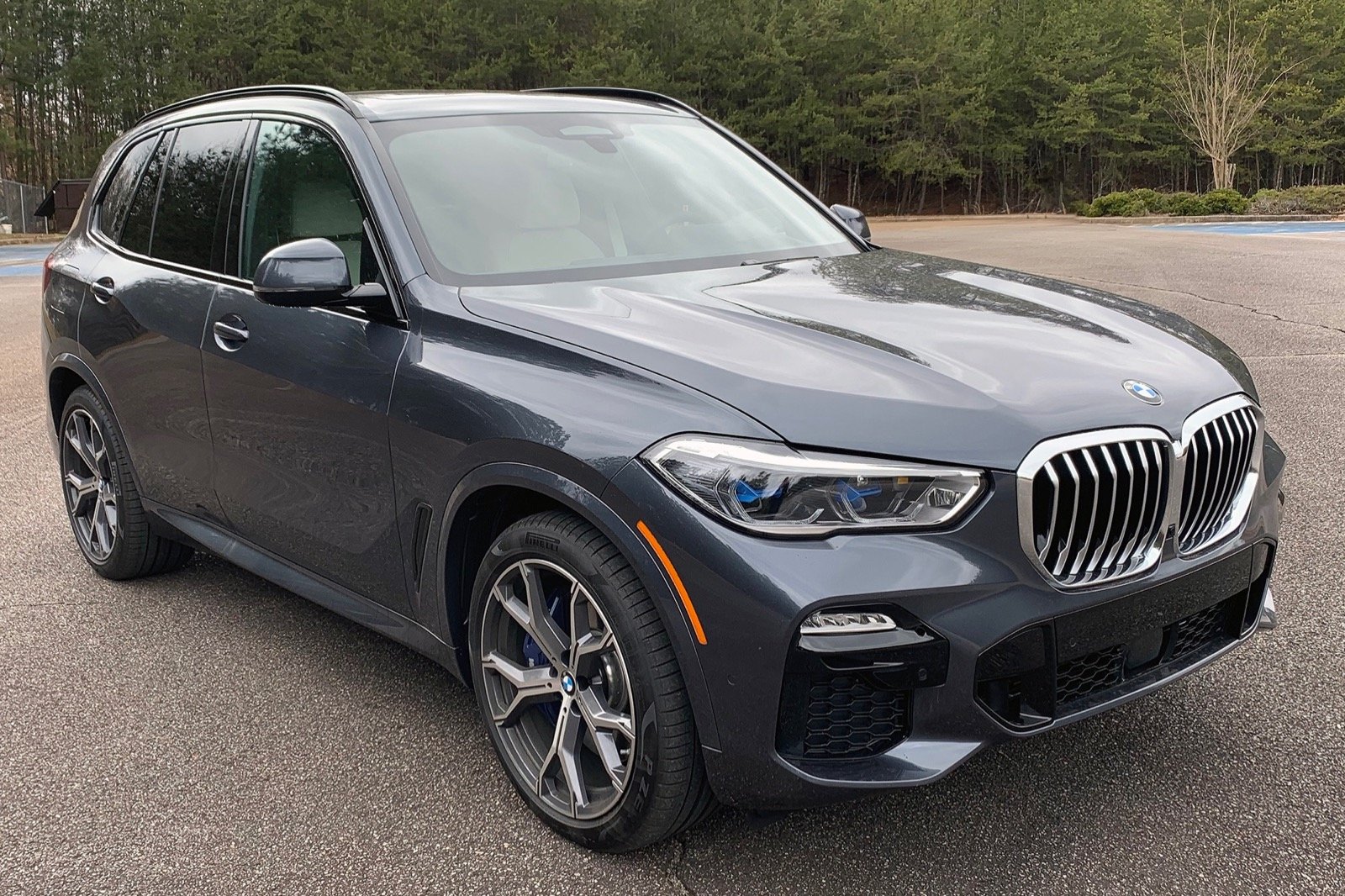 The BMW X5 was fully redesigned for the 2019 model year. In 2020, high-performance models were added to the mix and for 2021, the SUV’s second-generation plug-in hybrid variant joins the family. All feature similar body design and utility, including a large cargo area. 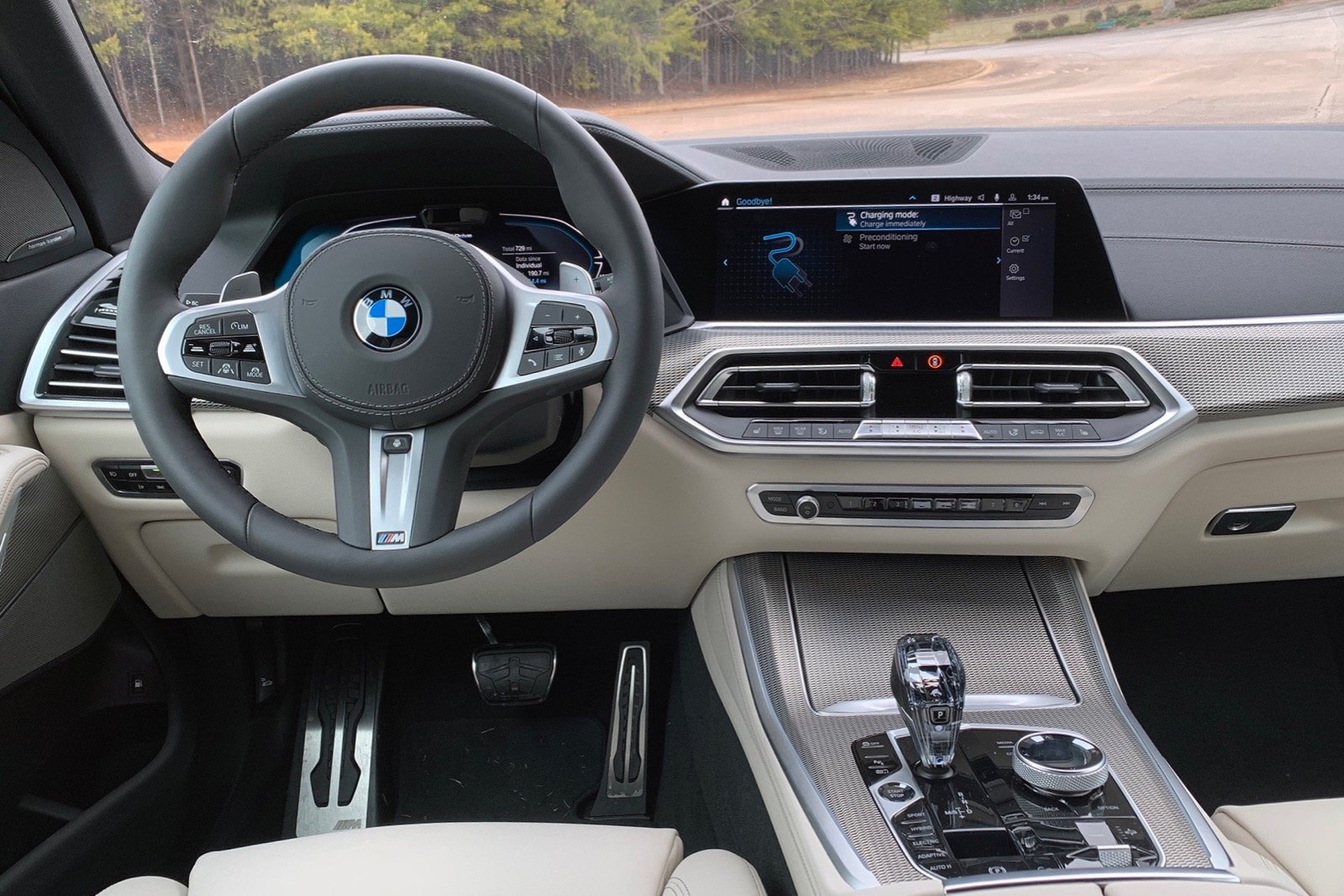 BMWs are known for their high-quality craftsmanship and the X5 is no exception. The X5 is part of BMW's true SUV range that includes the odd-numbered SUVs—X1, X3, and X7. The even-numbered models (X2, X4, and X6) are more like high-riding hatchbacks and crossovers.

The X5 luxury SUV delivers on what’s expected both with proportions and BMW sameness. From the kidney grille to the body shape, there’s no mistaking the X5 for anything other than a BMW. On one hand, that’s good—you know what to expect. On the other hand, it’s bad—the X5 can easily get lost in the shuffle amongst other BMWs parked in grocery store lots.

BMW has given the X5 a set of full adaptive LED headlights at its corners. Standard xLine models have matte aluminum grilles while underbody protection, roof rails, and side window surrounds are finished in satin aluminum, which makes for an upscale appearance.

Models specified with M Sport styling have wheel arch trim, bumper trim, rear underbody protection, and side skirts paint matched with the SUV’s body color and complimented by matte aluminum kidney grille bars while the roof rails and side window surrounds are finished in high-gloss black. The look is as sporty as an X5 can get.

The sameness issue persists in the interior, where nearly every switch, dial, and display has been brought over from the BMW parts bin to execute a design that looks like it could have been pulled from nearly any of the brand’s cars or SUVs.

That’s not to say it’s shoddy. Though there is an abundance of black plastic that easily collects dust and dots from liquid, there is plenty of leather and soft-touch material. 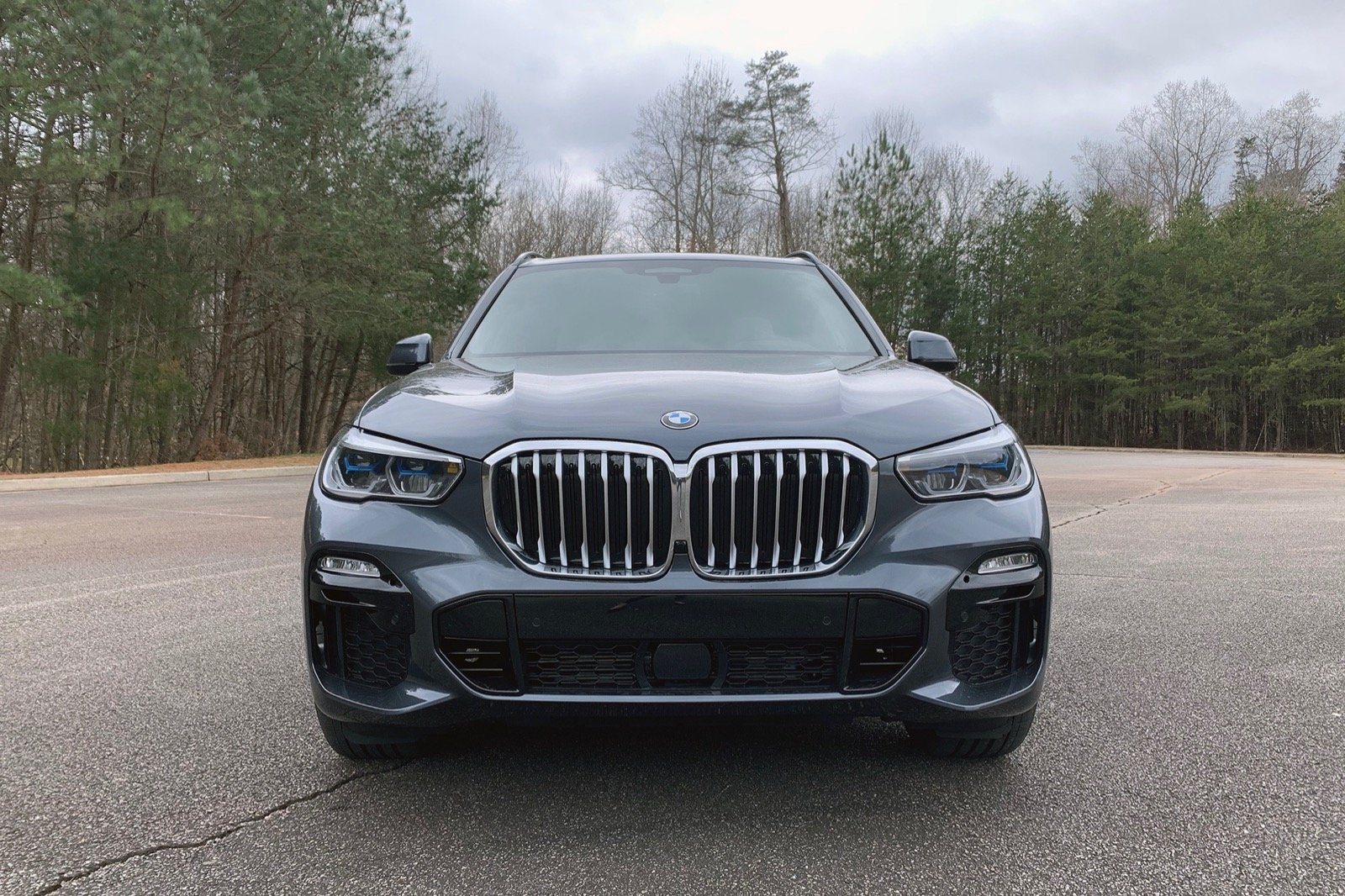 BMW has brought a number of powertrain options to the table, but all engines are paired with an eight-speed automatic transmission. The base X5 sDrive40i/xDrive40i is powered by a 3.0-liter inline six-cylinder power plant that delivers 335 horsepower and 330 pound-feet of torque. In BMW speak, sDrive refers to rear-wheel drive (RWD), while xDrive refers to (AWD). The base X5 is the only model available with RWD; all others get standard AWD.

The German automaker equips its X5 M50i with a twin-turbocharged 4.4-liter V8 that achieves 523 hp and 553 lb-ft of torque. That’s the same engine that’s in the BMW X7 M50i. The more powerful X5 M gets 600 hp from its twin-turbo V8. That number goes up to 617 hp when the Competition Package is added. BMW no longer sells the X5 xDrive50i.

For the 2021 model year, BMW has added the X5 xDrive45e plug-in hybrid model to its lineup. As tested, the SUV achieved 389 hp and 443 lb-ft of torque from its 3.0-liter six-cylinder engine, which is paired with a 24-kilowatt-hour battery. It is capable of getting up to 30 miles of all-electric range, which quickly regenerates when driving in city traffic or on rural roads.

Switching from all-electric power to hybrid or gasoline-only is a seamless transition. Any change in noise is imperceivable from the cabin and the responsiveness of the throttle is unaffected.

The X5 xDrive 45e’s power makes it capable but not inspiring. It can get you out of your neighborhood in a busy traffic situation in a jiffy but the car’s steering is incapable of keeping up with the pedal press, making wobbling in the newfound lane a common occurrence before straightening out.

This isn’t the only time drive dynamics are an issue in the X5. At low speed, the SUV steers like a full-size truck with plenty of wheel play. That’s fine. At higher speeds, even with the Sport drive mode selected, the SUV’s dynamics appear out of step with what BMW is known for. The X5 doesn’t deliver the connected drive experience and engaging handling other BMW SUVs do. In this respect, the model’s dynamics are very Lincoln-like.

The cabin of the SUV is also very Lincoln-like in that it doesn’t let in much road or engine noise. Bumps and dips in the road are soaked up by the vehicle’s suspension. Over speed bumps, the weight of the xDrive45e’s battery did not impede the drive or ride experience.

Charging the X5 is a breeze, thanks in large part to BMW’s choice to put its charging port up near the driver’s side A-pillar rather than on the backside of the vehicle. Even without plugging the SUV in to charge every day, it still was able to put a few miles of all-electric power in reserve while running errands allowing for emissions-free driving.

This model takes five hours to charge on a Level 2 (240-volt) charger. The EPA says that you're like to get about 400 miles of driving range when fully topped off but charging between stops can easily drive that number up.

All BMW X5 models take premium gasoline. The X5 M is the least fuel-efficient, achieving an EPA-estimated 15 mpg combined, followed by the X5 M50i, which gets 18 mpg combined. The X5 xDrive is more efficient than those, achieving 23 mpg combined while the X5 xDrive45e gets 20 mpg combined when strictly running on gasoline but is rated at 50 MPGe when getting power from electricity and gas. 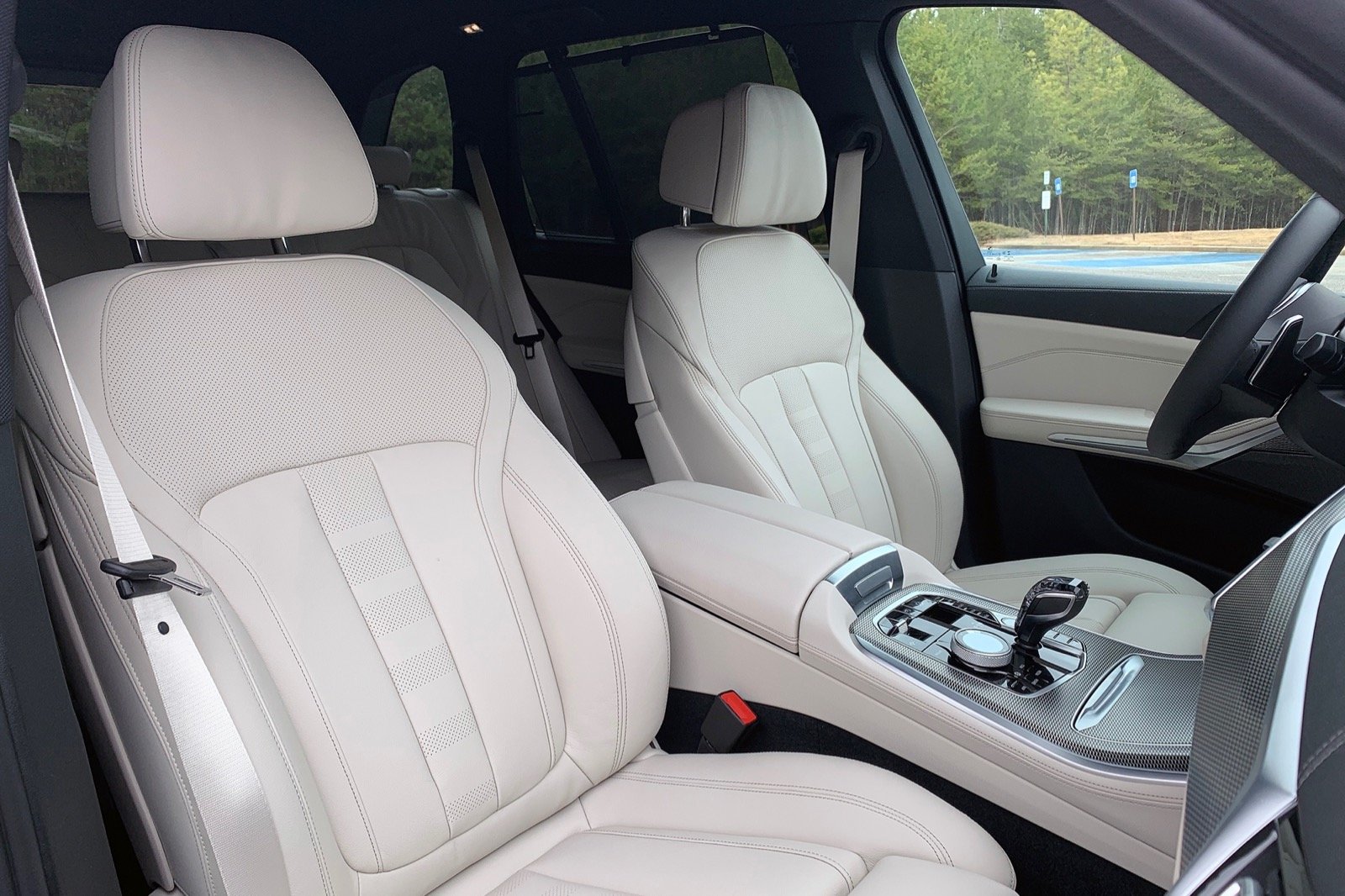 As usual, BMW makes good use of space in the X5. Cupholders are up at the front of the center console and out of the way. The center console is fitted with buttons, knobs, and dials which are hard to differentiate from at night without taking your eyes off the road and virtually impossible to read all at once unless you’re quite tall. The SUV’s wireless phone charging pad keeps the technology out of a driver’s line of sight.

Seating is spacious and comfortable, at least for short trips. After a few hours behind the wheel, the bottom of the front seats begins to feel a bit too hard. Heated seats and armrests worked as advertised with a marked difference between settings level.

Rear seats are plenty comfortable for kids and two adults can easily fit back there. BMW also offers the X5 with an available third row. It was not tested for this review with that option box checked.

The car’s climate controls are easy to manage. Though there’s not a big tactile difference between each button, their location, easily in the line of sight for the driver, makes this less of an issue than the console controls.

BMW has kept the X5’s split liftgate for the 2021 model year and it’s easy to operate thanks to full power functionality. The vehicle height adjustment button on the lower part of the liftgate is especially helpful when loading in awkward-sized and heavy cargo. It changes the height of the SUV using its air suspension, which has multiple settings.

Without the third row of seats in place, the X5's cargo area is plenty spacious. The X5 xDrive45e offers slightly less cargo space than the traditional X5, but that difference is likely negligible in the long run for most buyers. Moving children and cargo in and out of the second-row seats isn’t as easy, however. The doors do not open very wide. 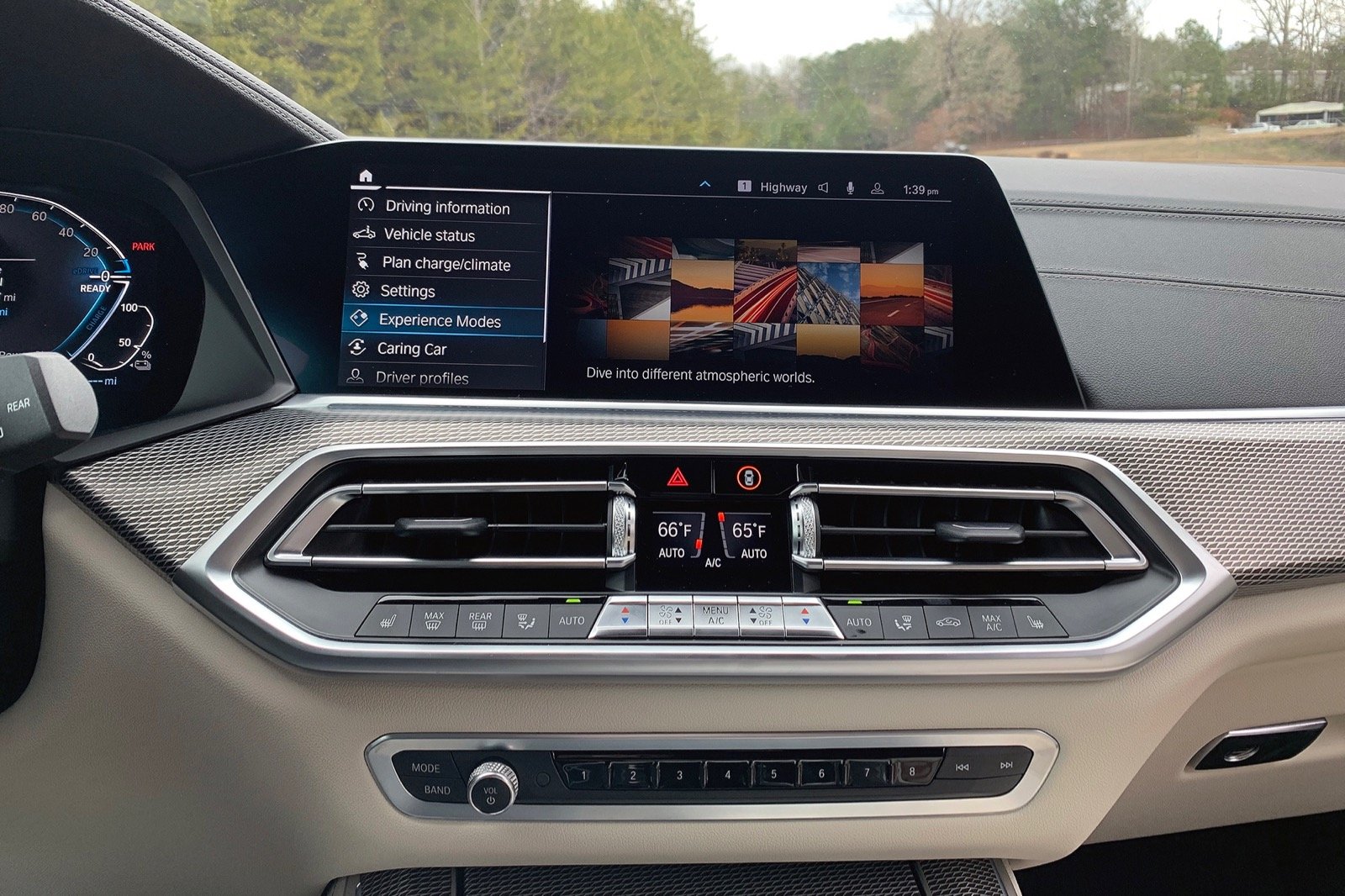 BMW has given the X5 a pretty good roster of standard features, which starts with the 12.3-inch infotainment touchscreen. There’s also wireless Apple CarPlay that, while it has no connectivity issues, does find itself taking over all musical operations of the vehicle when connected, even when not called upon to do so, immediately playing music when a user simply reads a text message or is browsing online, whether in the driver or passenger seat. The only fix is to get the vehicle and phone to “forget” each other. In other vehicles, wireless Apple CarPlay does not perform like this.

Like any infotainment system, the BMW iDrive system takes some getting used to. However, once you’ve operated it for a while it’s easy to find what you’re looking for. 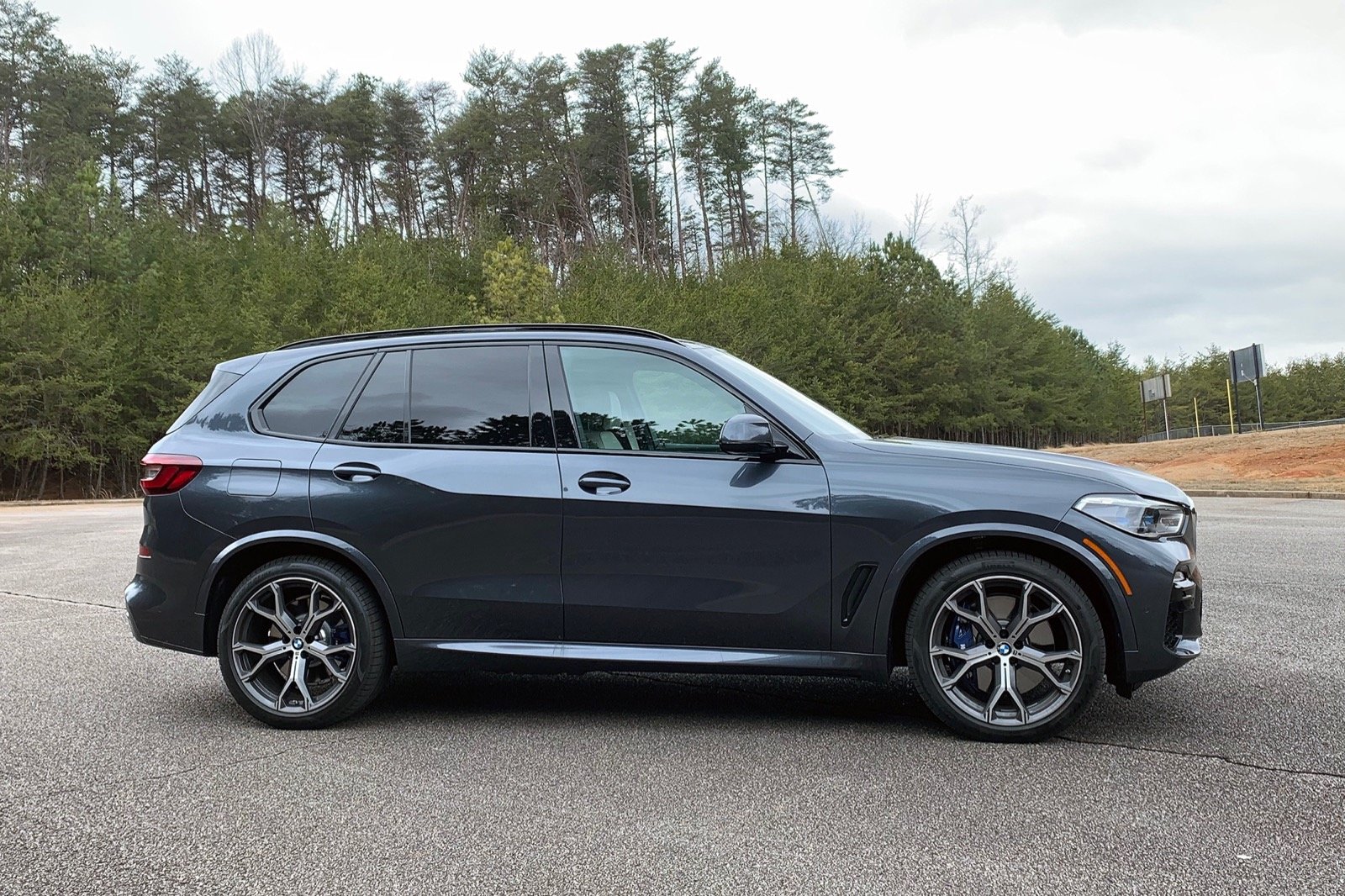 Not all of the equipment works well, however. The company’s hands-on (as opposed to hands-free) Driving Assistance Professional Package includes adaptive cruise control with stop and go functionality. It can be used at up to 130 mph and works as traditional adaptive cruise control with the ability to stop the vehicle and pull away again after being stationary for up to 30 seconds. In testing, the system did not appear to react to stopped traffic in time for a comfortable stop. This required human intervention, which canceled the assistance and required resetting.

Additionally, even a mild amount of sunshine seemed to interfere with the car’s cameras’ ability to “see” lane markings. This rendered the system mostly useless during daylight hours on a sunny day. Frequently, when sunshine appeared on one side of the vehicle, that side’s lane-keeping system would not work, causing the vehicle to swerve.

At night, the problem persisted though not as badly. A light rain aggravated the situation causing the car to do a ping-ponging maneuver from lane line to lane line while traveling at speed requiring the system to need to be disengaged due to safety concerns.

The 2021 BMW X5 has been given nearly all Good ratings by the Insurance Institute for Highway Safety (IIHS). Though already the subject of seven recalls, the National Highway Traffic Safety Administration (NHTSA) has given the SUV a four-star overall safety rating. 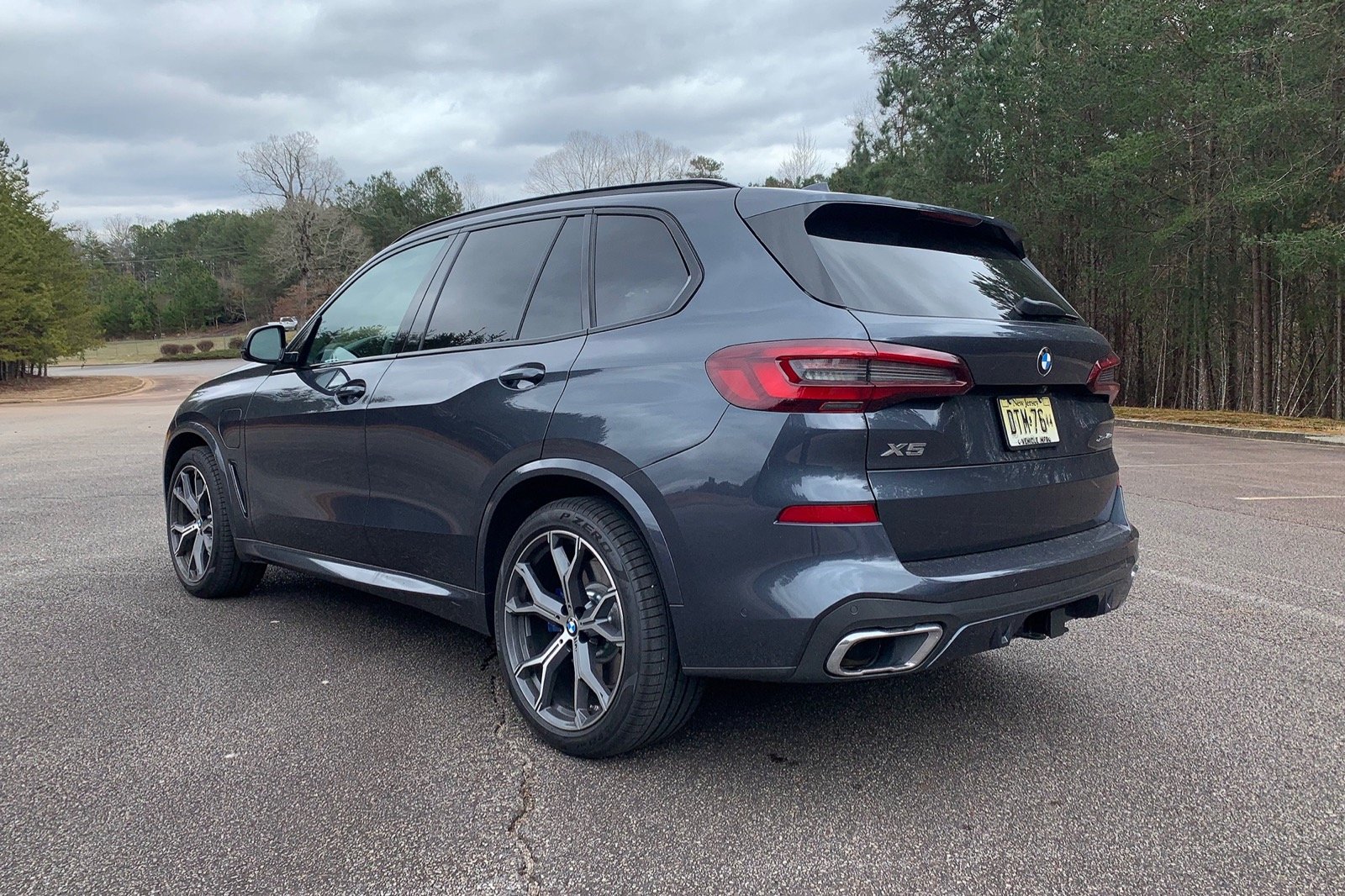 While the X5 is costly, it’s priced right compared with its competition. The SUV's pricing also seems appropriate given the level of engineering and craftsmanship that is apparent to anyone who walks by the model, let alone gets behind the wheel.

Drivers will want to be sure to watch the price tag of their packages and extras, however. BMW, like General Motors and Mercedes-Benz, are fans of driving up the cost of the model by making desirable features add-ons.

Higher priced X5 models are also less fuel-efficient thanks to their more powerful engines. While the X5 xDrive45e works to improve fuel economy, that comes at the price of driving dynamics. Buyers need to expect to spend several thousands of dollars more over five years of ownership (as much as $8,500 for the X5 M) on gasoline than what would be spent on a traditional car, according to the EPA.

If you like the dimensions of the BMW X5 but want an SUV with more focused handling and higher-tech infotainment interfaces, take a gander at the Audi Q7 and SQ7 or Porsche Cayenne, which deliver on both. The Mercedes-Benz GLE is also a close competitor.

Don The X5 is the fusion of a sports car and an SUV!

Enter your zip to see incentives for a new X5 in your area.