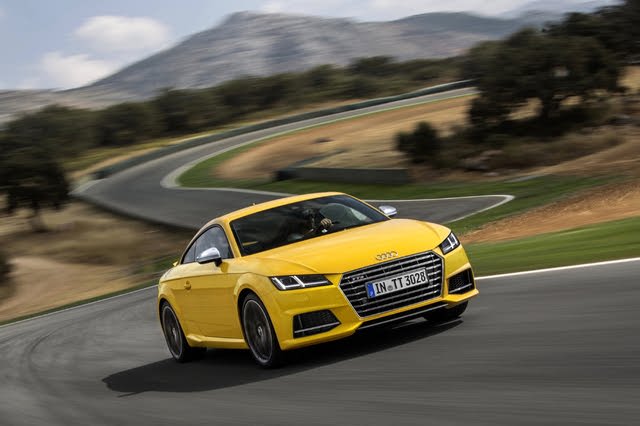 The Audi TT has been on sale for over 20 years, and it charges into 2021 despite rumors that it will be discontinued. While those rumors may soon prove true, the base car’s hotter cousin—the TTS—comes with a load of newly-standard equipment for the 2021 model year. While the standard TT can be ordered as either a coupe or as an open-top roadster, the high-performance TTS can only be had as a hardtop coupe. The Audi TTS competes with sports cars like the Toyota Supra, Porsche 718, BMW Z4, and even the lower-priced Mazda MX-5 Miata.

While the standard Audi TT gets a 228-horsepower turbocharged 2.0-liter four-cylinder engine, the hopped-up TTS is powered by a 288-hp version of the same engine. People desiring even more power can opt for the TT RS, which gets a 2.5-liter inline-five making 294 hp. The TTS’ power hits all four wheels through a seven-speed dual-clutch automatic gearbox.

Inside, the Audi’s cabin sees more standard features than it did the year before. The list includes navigation, blind-spot monitoring, Nappa leather upholstery, a premium audio system, and updated smartphone connectivity features. Apple CarPlay and Android Auto are present as well, but their implementation is different than what is seen in other vehicles. The TTS does not have a central infotainment display, so these functions appear in the car’s Virtual Cockpit digital gauge cluster. Rather than a touchscreen, most of what happens on the display is controlled with steering wheel-mounted buttons.

The 2021 Audi TTS hasn’t been crash-tested by the Insurance Institute for Highway Safety (IIHS) or the National Highway Traffic Safety Administration (NHTSA). Standard safety equipment includes front and rear parking sensors and the aforementioned blind-spot monitoring system, but the TTS is not available with automatic emergency braking or forward-collision warning.