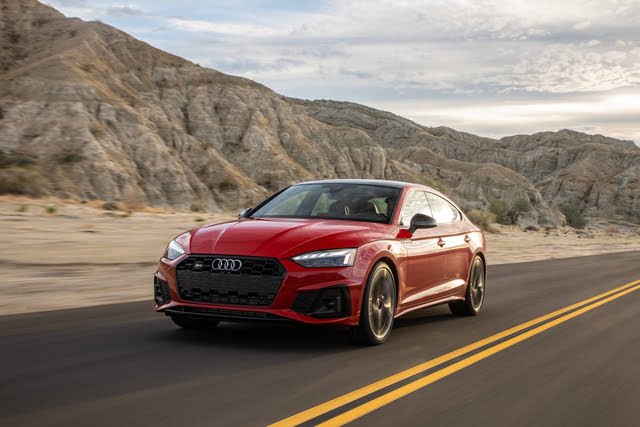 Looking for a New Audi S5 Sportback in your area?

A compromise wasn’t always a bad thing, but in the world of sport sedans, it seems like any decision that doesn’t get you a better zero to 60 mph time, a more impressive skidpad number, or help set a new record at the Nürburgring, is verboten. But for those who realize that the difference between a car taking 4.3 seconds and 4.1 seconds to get to 60 mph can’t really be felt by most humans, there’s a whole world of lovely cars out there to try. Enter the Audi S5 Sportback. You’ll never see it as the leader in any head-to-head competition (not that there’s a lot of great Sportback competition right now) but it’s a car that offers sportiness and utility—with just a little bit of compromise.

And this year you’re getting a bit more for your money, too. For the 2021 model year, the S5 Sportback adds standard features and expands option packages as well. Every S5 now comes with Audi’s smartphone interface for wireless Android Auto and Apple CarPlay, as well as an integrated toll-road payment feature that makes you realize we should’ve been paying tolls like this already. Lane-departure warning has also been added to every S5 regardless of the trim level, and if you go for the Convenience Package for its alarm system, power/heated and auto-dimming side mirrors, blind-spot monitoring with rear cross-traffic alert, keyless entry and ignition, and driver memory system, you’ll now see front and rear parking sensors and a heated steering wheel added to the list.

But the big winner this year is the mid-level Premium Plus trim, which sees adaptive cruise, lane-keep assist, and a 360-degree camera added to its list of standard features. Don’t think the top-tier Prestige trim level was left alone, either. It gets standard heated rear seats.

That’s on top of an already well-equipped package of performance you get with the S5. Starting with the base Premium trim, you get a panoramic sunroof, leather for the heated front seats (which also offer massage), and forward-collision warning with automatic emergency braking—features that are too often left to the options list.

Of course, what everyone is really interested in with the S5 is the engine. While the previous S5 got a supercharged 3.0-liter V6, today we get turbocharging for 349 horsepower and 369 pound-feet of torque. A twin-scroll turbocharger sits between the “vee” of the six-cylinder engine, reducing both weight and turbo lag. In everything but the optional Comfort drive mode, the turbo spins up quickly and pushes the S5 from the line with authority, powering all four wheels through Audi’s Quattro all-wheel-drive system.

Audi says the S5 will do zero to 60 mph in 4.3 seconds, which leaves it a few tenths behind its closest competition, but not enough to make a difference anywhere except on paper. The EPA is estimating a return of 20 mpg city, 28 mpg highway, and 22 mpg combined—meaning a 1 mpg increase in the highway category. That said, we expect real-world numbers to beat those estimates.

Of course, the real defining feature of the S5 Sportback is the… sportback. This adds a liftback gate to the S5’s sedan profile, which leads some people to call it a coupe. But a rose by any other name would still offer the same added headroom for rear passengers, and that’s what matters. The fact that it also means you get an impressive 21.8 cubic feet of trunk storage, more than double the regular S5, is just a bonus. If you’re a sport sedan fan, and more concerned with real-world usability than having the best numbers, the S5 Sportback should be first on your list.

Have you driven a 2021 Audi S5 Sportback?
Rank This Car

Enter your zip to see incentives for a new S5 Sportback in your area.

Looking for a Used S5 Sportback in your area?