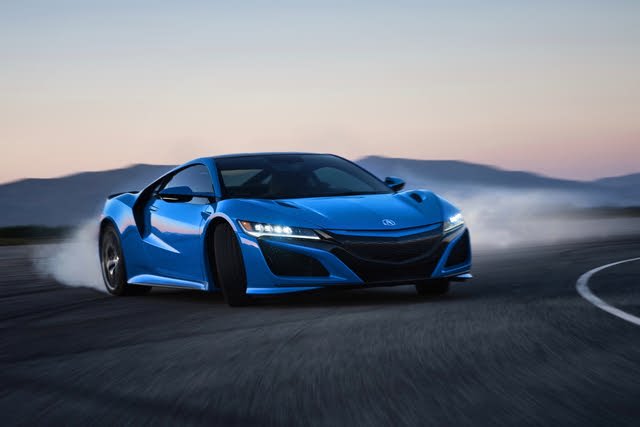 Looking for a New Acura NSX in your area?

The first-generation Acura NSX is one of the most sought-after and legendary cars around, but its successor is nothing to sneeze at. When it hit the market in 2016, the second-gen NSX offered cracking performance and advanced all-wheel drive (AWD). The NSX enters the 2021 model year nearly unchanged, save for the addition of a special new paint color.

The new-model-year NSX brings back a legendary color for Acura—Long Beach Blue—which today is one of the rarest and most desirable colors from the first-gen NSX rainbow. Acura says the color is a salute to the Acura Grand Prix of Long Beach, where the automaker is a presenting sponsor.

Regardless of the exterior hue, all NSXs are powered by a 500-horsepower 3.5-liter V6 teamed with three electric motors: a direct-drive motor sandwiched between the mid-mounted engine and nine-speed dual-clutch transmission, and two more up front. The combination adds up to a total system output of 573 hp, which reaches all four wheels through a special Sport Hybrid Super Handling All-Wheel Drive (SH-AWD) system. The potent powertrain delivers a 0-60 mph time of just 2.9 seconds and a top speed of 191 mph, per Acura.

In the cockpit—and we truly do mean cockpit literally—the NSX is an exercise in what Acura calls functional minimalism. The focus is on everything the driver needs to operate the car, and on hiding or removing almost everything else. Leather and carbon fiber cover nearly every surface, and the steering wheel has been notched at both 10 o’clock and two o’clock, and nine o’clock and three o’clock, to provide comfortable handholds for various driving styles. The seats are covered with leather and Alcantara and heavily bolstered for spirited driving at high speeds. Acura notes that the car was designed to be supportive and comfortable for drivers whose height reaches the 95th percentile.

An Acura ELS Studio Premium Audio system is included, which delivers 580 watts of sound through nine speakers built from lightweight components. A 7-inch touchscreen is standard that runs Apple CarPlay and Android Auto. Bluetooth, navigation, HD Radio, and more are all standard.

Having an Acura-made supercar doesn’t mean you need to give up on creature comforts, either. The NSX gets dual-zone climate controls, LED ambient interior lighting, heated seats, cruise control, and an air filtration system. Corner and backup sensors are also included.

The 2021 Acura NSX is on sale now and carries a starting price of $159,495 after a $1,995 destination charge. Several added-cost options packages are available, some of which drive the price up by $10,000 or more. That new Long Beach Blue Pearl is one of several premium colors that cost an extra $1,000, while two special Andaro paint colors add a whopping $6,000 to the price tag. There’s also an available carbon-ceramic brake option for $10,600 or a gloss carbon fiber exterior package with a carbon-fiber engine cover for $12,600.

Have you driven a 2021 Acura NSX?
Rank This Car

Enter your zip to see incentives for a new NSX in your area.