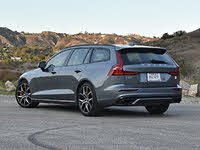 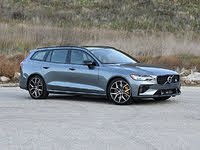 Looking for a Used V60 Hybrid Plug-in in your area? 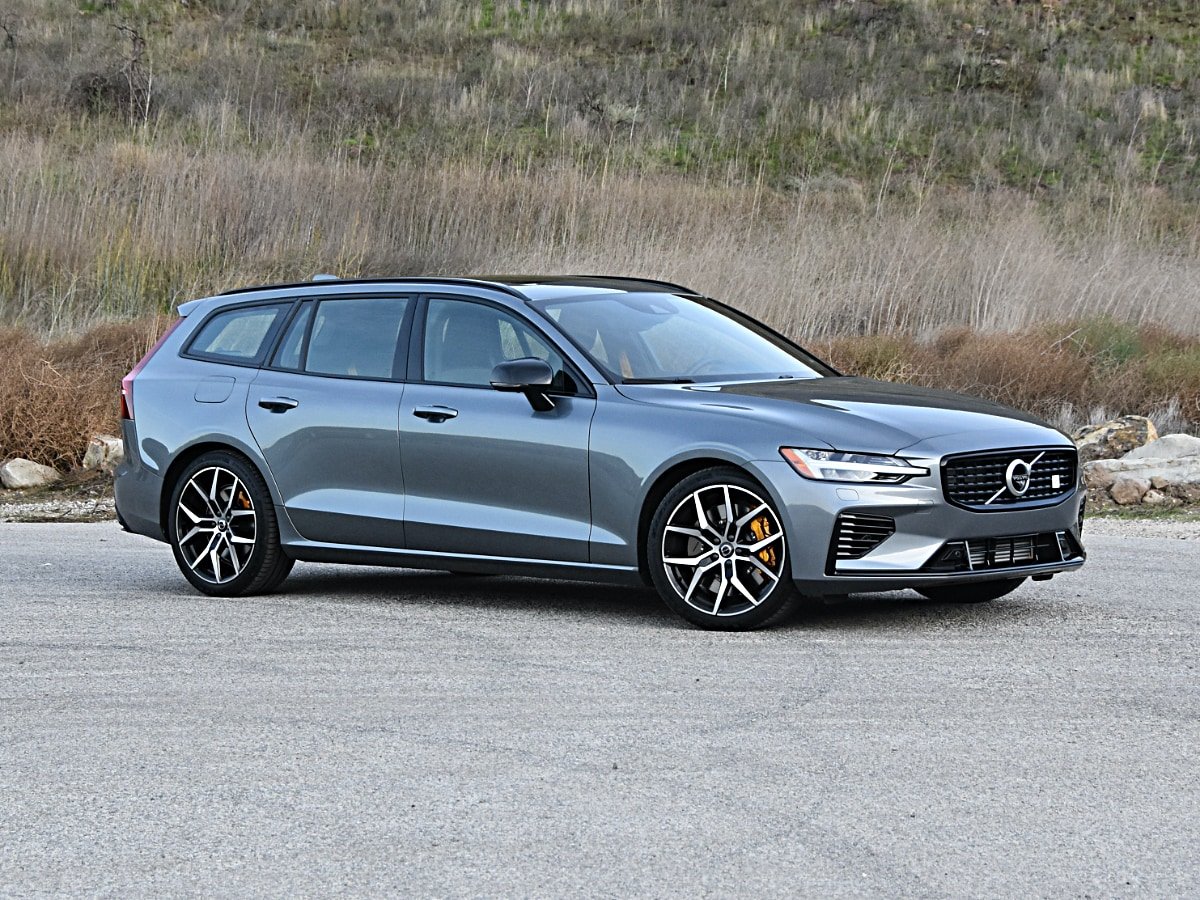 Because an SUV is heavier than a typical car and sits higher off the pavement, it has a higher center of gravity. And a high center of gravity leads to a comparatively sloppy ride and handling characteristics. That’s why station wagons like the 2020 Volvo V60 are so appealing to your average driving enthusiast—especially the hybrid plug-in variant and its T8 Polestar Engineered performance specification. Sport tuning + a low center of gravity + gobs of power = a thrilling family hauler. 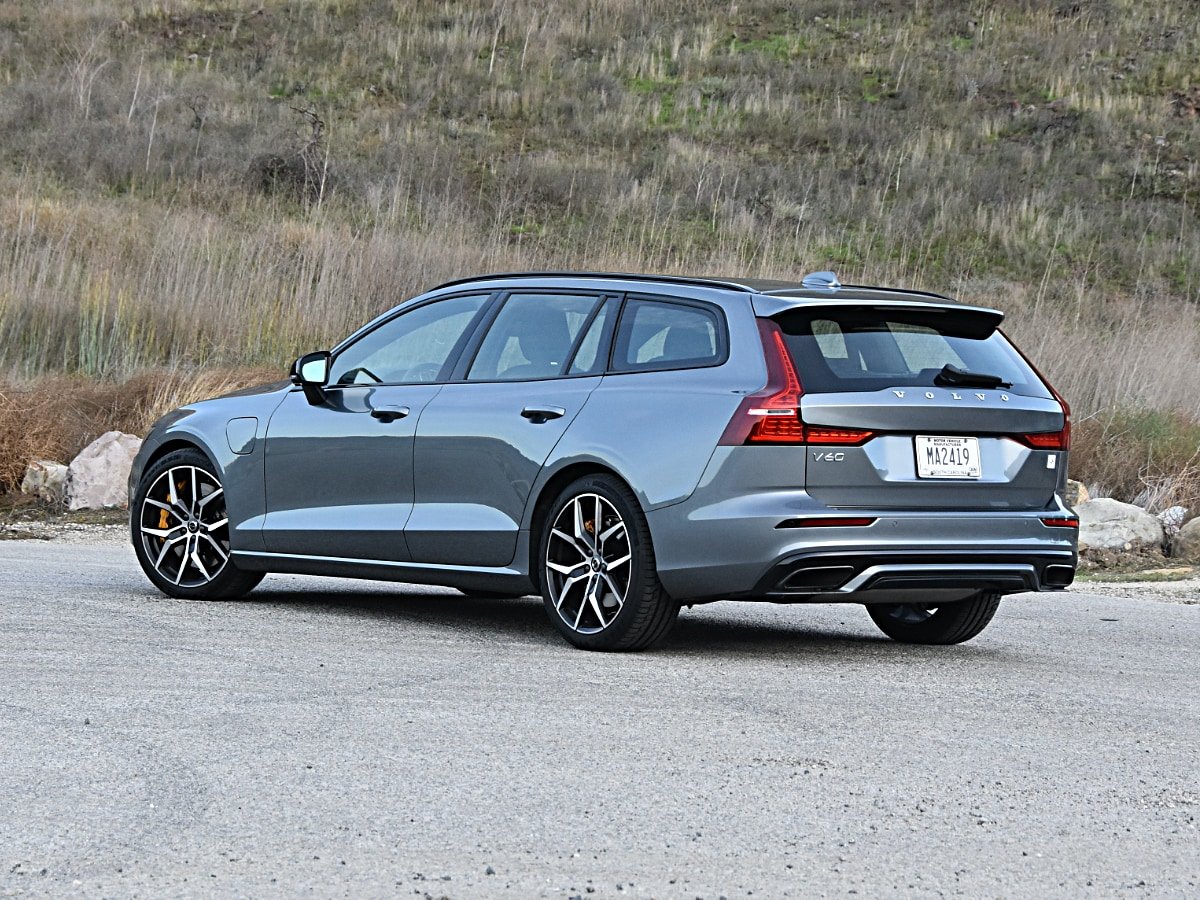 Clearly, the days of calling Volvo wagons “bricks” are over. If you can’t see that the 2020 V60 is gorgeous, you need to have your eyes examined.

Long, low, and led by Volvo’s Thor’s hammer running lights and iron-mark grille, the artfully sculptured V60 is an ocular feast. The only trim available for the V60 Hybrid Plug-in is Volvo's performance-oriented T8 Polestar Engineered eAWD. Sitting on 19-inch, Y-spoke forged aluminum wheels with gold Brembo brake calipers visible in the background, this wagon is all about stealth. Maybe that’s why the V-O-L-V-O lettering on the tailgate is so big. The company must want you to know what the heck just screamed past you.

Inside, people familiar with the current crop of Volvos will recognize the dashboard and control layout. Anchored by the automaker’s Sensus infotainment system, the V60 Hybrid Plug-in's cabin comes only in black. Stitched leather, piano-black accents, mesh metal trim, and knurled metal knobs highlight the upscale minimalism of the design, while gold seatbelts add a dash of color.

Priced at $67,300, the V60 T8 Polestar Engineered comes one way: fully loaded with equipment. Your options are restricted to metallic paint and a list of dealer-installed accessories. My test car, dipped in Osmium Gray paint, came to $68,940.

If you like the V60’s look but don’t want this top-of-the-line version, the standard, non-hybrid, front-wheel-drive (FWD) T5 with Momentum trim starts at $39,650. The T5 Cross Country, which has a raised suspension and standard all-wheel drive (AWD), runs $45,100 before adding options. 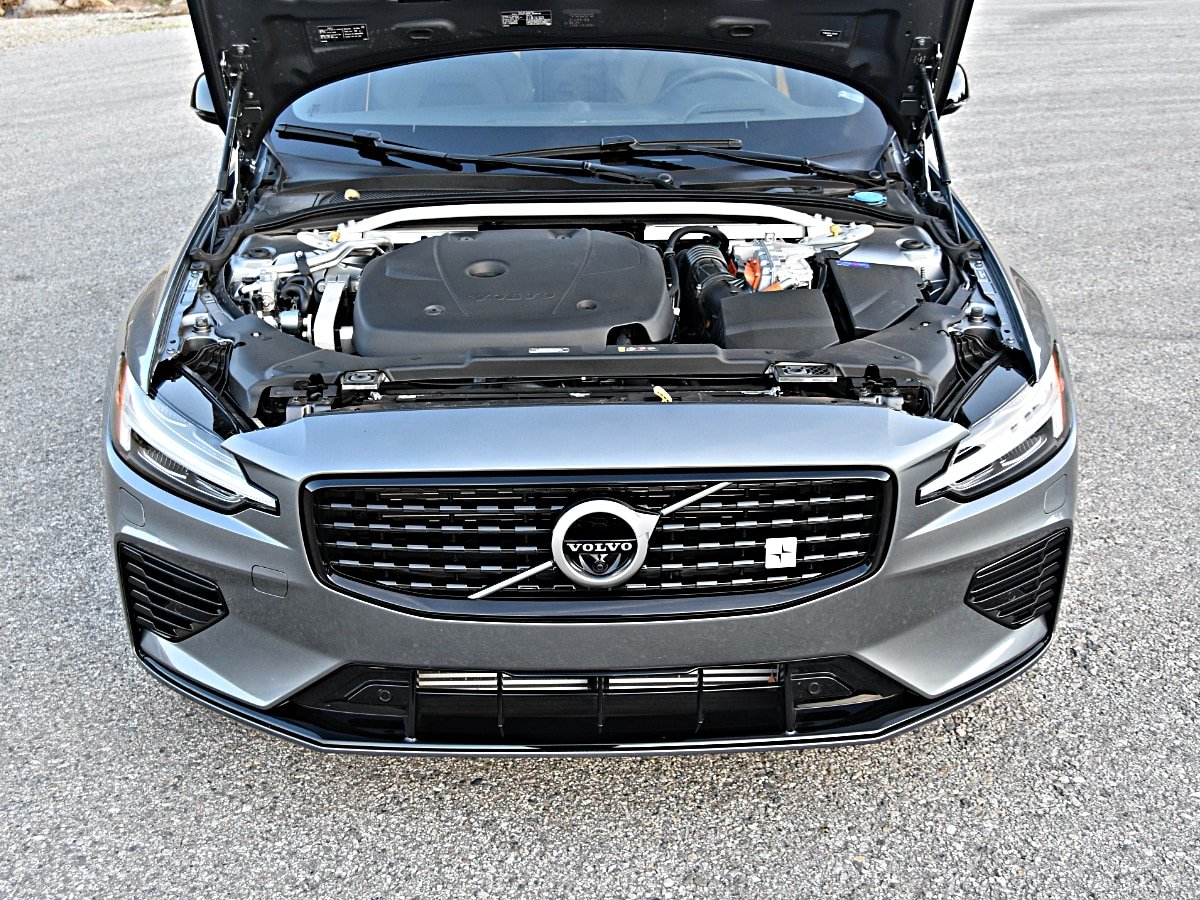 Equipped with a turbocharged and supercharged 2.0-liter 4-cylinder engine, a lithium-ion battery, two electric motors, and an 8-speed automatic transmission, the V60 Hybrid Plug-in can travel short distances on nothing but electricity before switching to gas-electric hybrid operation for longer trips.

Rated to make 415 horsepower and 494 pound-feet of torque, the powertrain sprints the 4,583-pound wagon to 60 mph in about 4.5 seconds. For that level of performance, you’ll want to choose the Polestar Engineered driving mode, mash the accelerator to the floor, and hold on tight.

Naturally, the car gets a full Polestar mechanical massage: chassis, brakes, throttle response, forged aluminum wheels, performance tires, and exhaust. Together, the components expertly manage the car’s extra battery-and-electric-motor weight and make the V60 T8 Polestar Engineered wagon a delight to drive just as hard and as fast as you dare.

There is a penalty to be paid for that performance, though. The ride is quite stiff. That’s where the adjustable Ohlins struts come in handy. Open the hood, and you can adjust them by hand to fine-tune the ride and handling equation.

As far as the plug-in hybrid powertrain is concerned, I performed three separate tests on it.

First, I wanted to see how far I could drive on electricity alone. Leaving home with a full battery charge, in the Pure driving mode, and with added regenerative braking enabled, the car traveled 23.5 miles during an hour of combined city and suburban driving.

Next, I drove my entire testing loop with the battery in its minimum state of charge, in Hybrid mode, and with Polestar Engineered mode engaged for the twisty mountain road sections. The car averaged 21.5 mpg, falling well short of the EPA’s estimate of 30 mpg in combined driving.

The final test was an afternoon of Christmas shopping. I left home with a full battery, left the car in Hybrid mode, and did not engage extra regenerative braking. My average was 39.8 mpg.

To ensure all its power gets to the ground, one of the V60 Hybrid Plug-in’s electric motors powers the rear wheels whenever necessary, like when clipping a corner apex and dipping into the throttle to exit with haste. For rain and snow, this wagon also comes with a Constant AWD mode. But with 5.6 inches of ground clearance, you’re not going to want to go much farther off the pavement than the road shoulder. 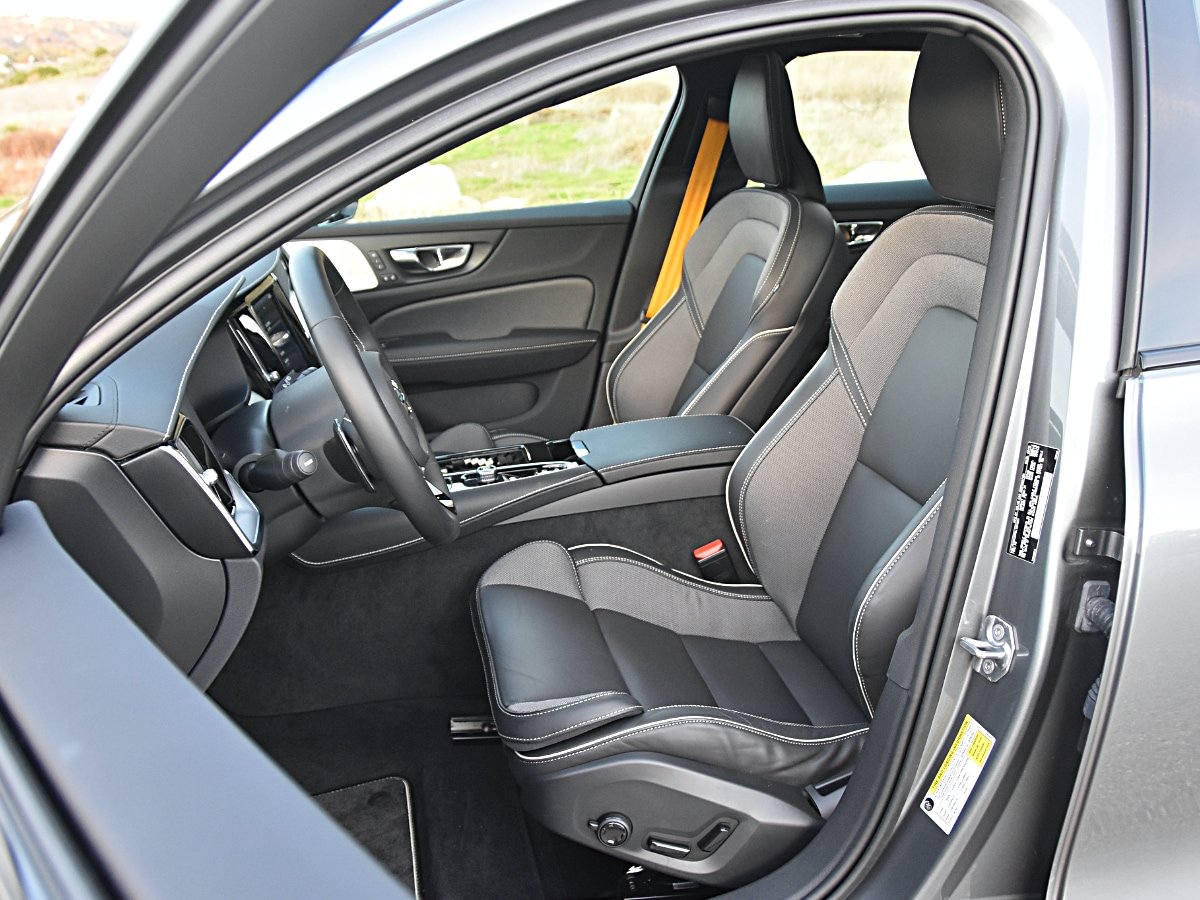 The whole point of a station wagon is utility, so naturally, the V60 offers more cargo space than the S60 sedan on which it is based.

The S60 sedan’s trunk holds 13.8 cubic feet of cargo, according to Volvo. The V60’s cargo area adds nearly 10 cubes to that number, for a maximum of 23.2 cubic feet. But most of that extra volume is accessible only if you stack stuff to the roof, and since the V60 T8 Polestar Engineered doesn’t include dark tinted rear privacy glass, anything you load will be visible through the glass.

Pull the cargo shade, and you solve that problem. At the same time, you also cut down on cargo space, which is why Volvo quotes 18.7 cubic feet with the shade in use. The maximum volume with the rear seats folded down is 50.9 cubic feet.

Within the cabin, storage space is in short supply. The center storage console under the armrest is shallow, and aside from the cupholders, there isn’t much space for stashing things. You’ll need to use the generous door-panel bins or the glovebox.

In spite of their substantial side bolsters, the front seats feel very comfortable. The rear seat isn’t quite as satisfying due to a low seat cushion and, if you use the V60 Hybrid Plug-in as a 5-passenger vehicle, a substantial hump in the middle of the floor. That’s why this car is good for families of four, but no more. 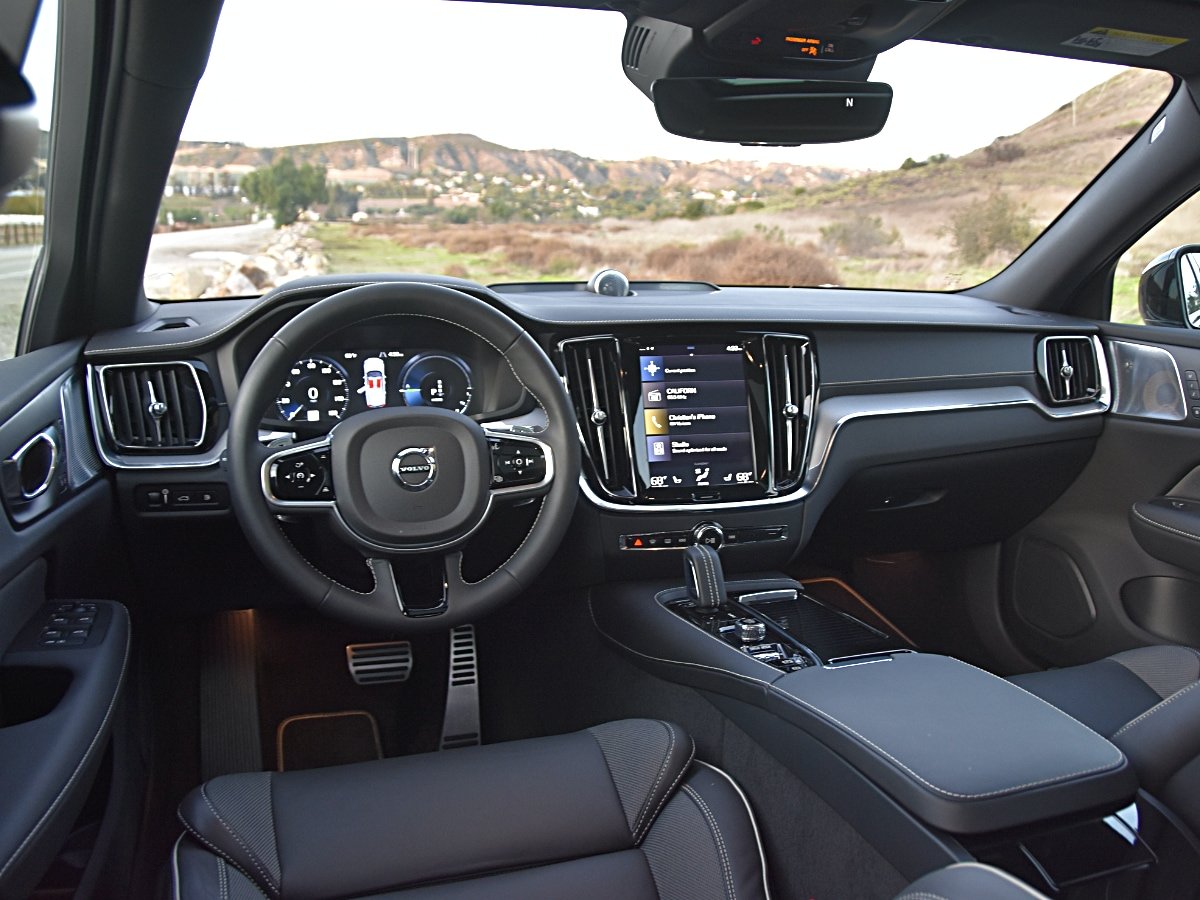 Looking and operating just like a big smartphone or tablet computer, Volvo’s Sensus infotainment system is standard in the V60 Hybrid Plug-in.

The main screen includes five tiles related to navigation, audio, phone, climate control, and one that can be customized. Touch any of them, and they expand for more detail.

To access deeper functionality, you swipe left, swipe right, or swipe down. These actions provide access to most vehicle settings as well as on/off buttons for various vehicle systems.

While Sensus is intuitive, using it while driving is distracting. Also, the screen collects fingerprints like a detective, which is why Volvo includes a handy smudge-removing cloth in the center console.

As standard equipment, the T8 Polestar Engineered trim pairs Sensus with an outstanding 15-speaker Bowers & Wilkins high-end audio system. You also get a 12.3-inch digital instrumentation display with embedded navigation and a head-up display. Unfortunately, the latter is rendered invisible by polarized sunglasses.

A 360-degree surround-view camera system is also standard on this version of the V60. In conjunction with front and rear parking sensors, it makes maneuvering in close quarters quite easy. And when it’s raining, the rear wiper automatically engages with reverse gear to improve visibility through the rear-view mirror. 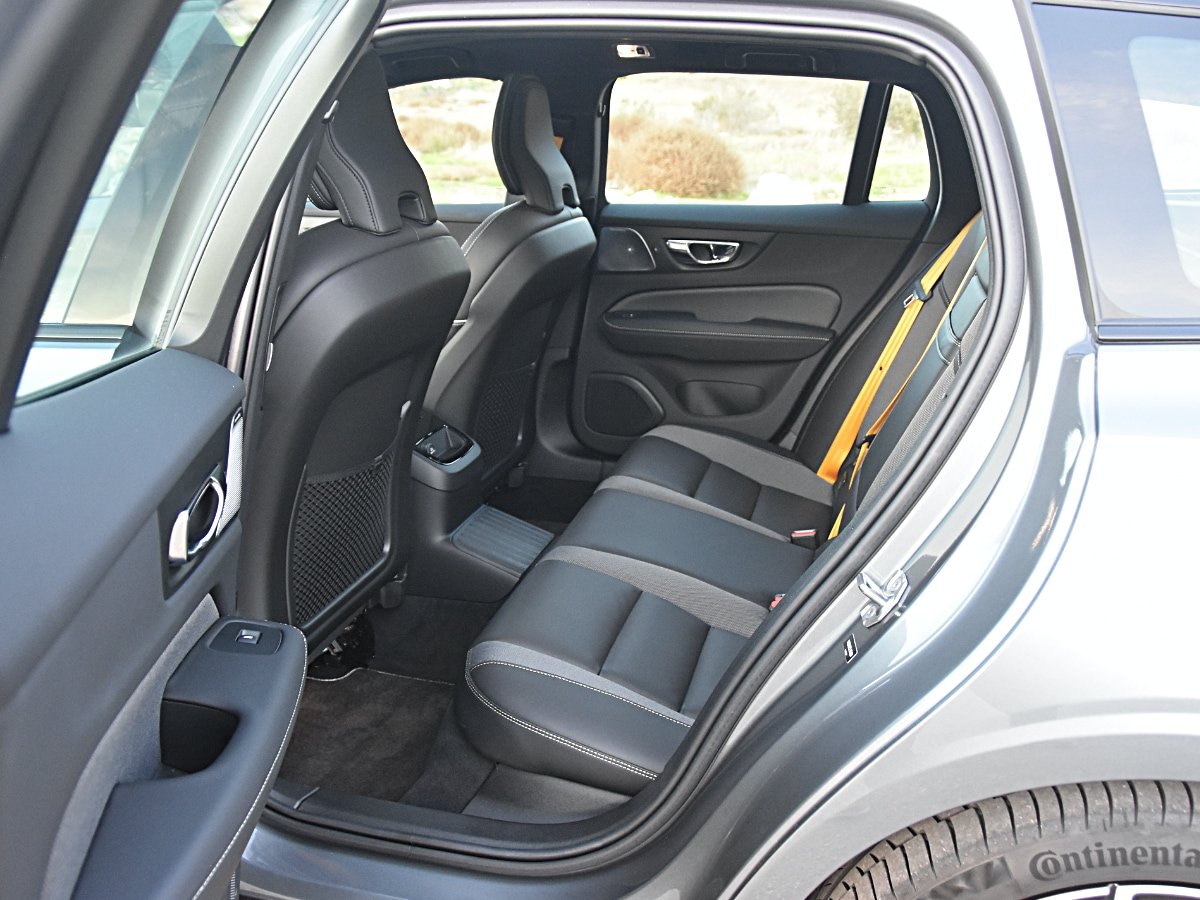 Volvo’s stated goal is to ensure that none of its customers perish in a collision. The V60 is designed, constructed, and equipped to meet that goal.

The Insurance Institute for Highway Safety (IIHS) has not performed crash tests on the Volvo V60, and if it had, they likely would not apply to this plug-in hybrid due to its unique drivetrain and added weight. However, there is a signpost suggesting exceptional protection in a collision, and that’s the Top Safety Pick+ rating the IIHS bestows upon the Volvo S60 sedan.

Of course, the goal is to avoid crashing into something in the first place. That’s why the V60 Hybrid Plug-in includes all the advanced driving assistance systems (ADAS) available from Volvo.

They all work with smooth, refined action, too. However, on one occasion in a crowded shopping-center parking lot, the automatic emergency braking engaged in response to a perceived threat that actually wasn’t one. 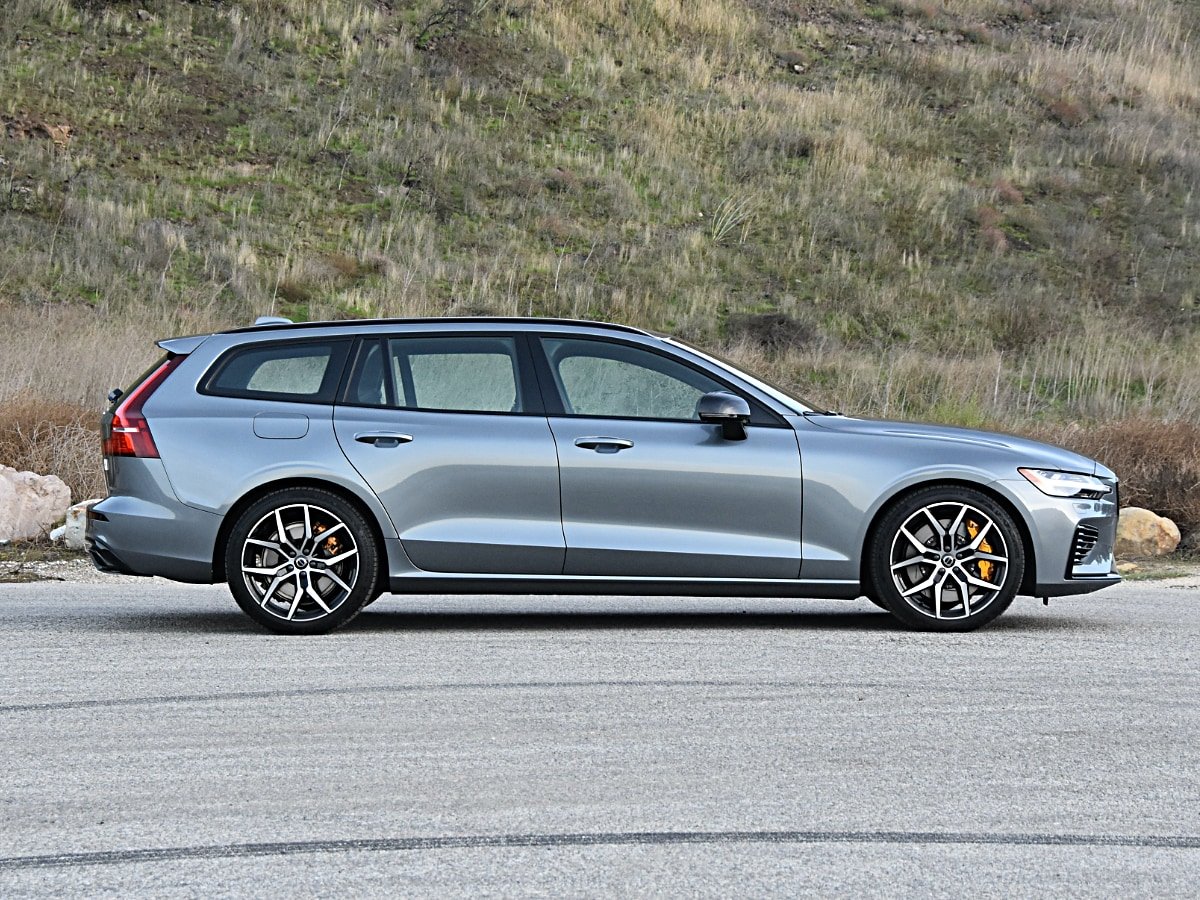 Station wagons are rare, and hybrid plug-in wagons are nonexistent—except for the Volvo V60. If that’s what you want to drive, this Volvo is your choice, making the question of cost-effectiveness a non-issue.

Still, to put this vehicle in context, compare it to a fully loaded Volvo V60 T5 Inscription. You can spend more than $58,000 to get into one of those. That puts the value of the T8 Polestar Engineered model’s hybrid plug-in drivetrain and its substantial improvement in performance at about $10,000 before applying the $5,419 federal income tax credit.

Audi also sells a compact wagon, and with every option box checked, the A4 Allroad stickers for more than $59,000. Closer to the V60 T8’s price, Jaguar sells the XF Sportbrake. Base prices start in the same neighborhood as the V60 Hybrid Plug-in's, but the Jag can’t match the Volvo's performance at that price. It does, however, offer more cargo space.

Because of its unicorn status, the Volvo V60 Hybrid Plug-in is a cost-effective choice if you seek its specific characteristics. And considering that a loaded-up BMW M340i sedan costs just as much as this Volvo without the added utility or efficiency, well, it seems like a V60 T8 Polestar Engineered is worthy of the price Volvo asks.

And just think of the money you’ll save if you charge the battery on a regular basis.

Looking for a Used V60 Hybrid Plug-in in your area?