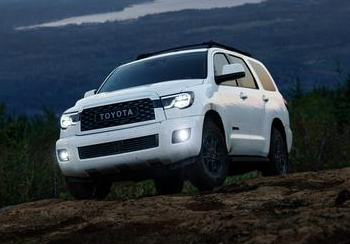 Looking for a New Toyota Sequoia in your area?

The Toyota Sequoia, last redesigned in 2007 and last refreshed in 2018, gets the new TRD Pro trim for 2020. Key rivals include the Ford Expedition, Chevrolet Suburban and Tahoe, and Nissan Armada.

The burly Sequoia has a classic look, in part because it’s been around so long. The new TRD Pro freshens things up with LED headlights and fog lights, 18-inch black BBS wheels, and a new Army Green paint option.

The Sequoia’s sole powertrain, a 5.7-liter V8 and 6-speed automatic transmission rated for 381 horsepower and 401 pound-feet of torque, carries over unchanged. Four-wheel-drive (4WD) system, which features high- and low-range gearing and a locking center differential, comes standard. An adaptive suspension system is also available. The new TRD Pro trim adds a skid plate for underbody protection and is available with a sport exhaust system. The thirsty Sequoia requires 13 mpg city, 17 highway, and 15 combined.

A 6.1-inch touchscreen infotainment system now comes standard in the Sequoia, though the TRD Pro trim gets a 7-inch touchscreen. Android Auto and Apple CarPlay are now included, along with Amazon Alexa, Bluetooth, and satellite radio. Options include navigation, a rear-seat entertainment system, and a 14-speaker premium JBL audio system.

The new TRD Pro trim is tempting and the updated list of tech features helps it stay competitive.

What's your take on the 2020 Toyota Sequoia?

Have you driven a 2020 Toyota Sequoia?
Rank This Car

Enter your zip to see incentives for a new Sequoia in your area.