Looking for a Used Prius Prime in your area? 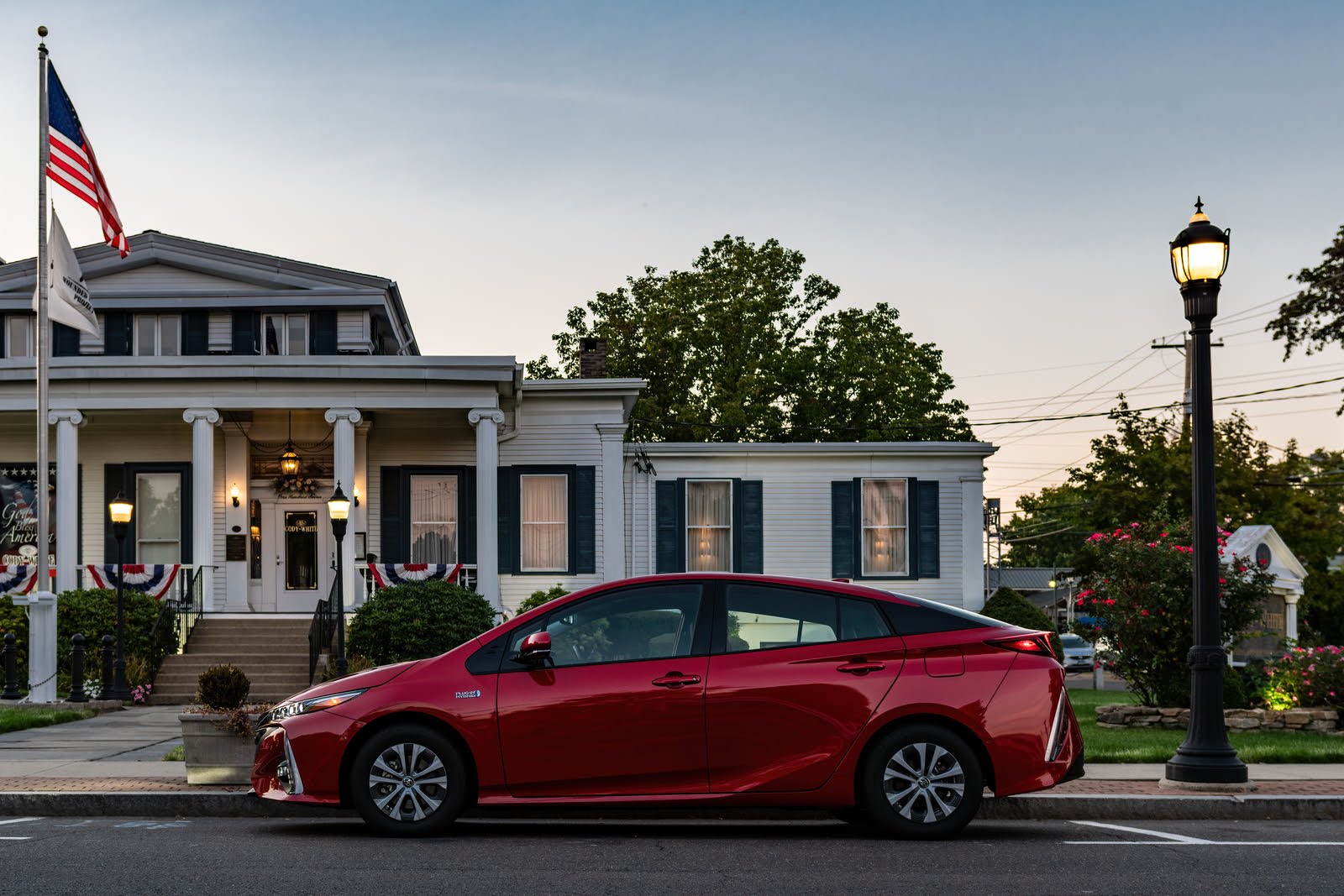 Stop right here if you want to save the most money on gas. Close your other browser tabs and take a bank check to the nearest Toyota dealer. The Prius Prime is the most efficient plug-in hybrid on sale, period. Toyota's 20-plus years of hybrid expertise make its closest competitors look like college interns. The Hyundai Ioniq, Honda Clarity, and Chevrolet Volt may edge the Prius Prime on electric range, but on price, features, reliability, and all-out economy, you cannot beat this household name. 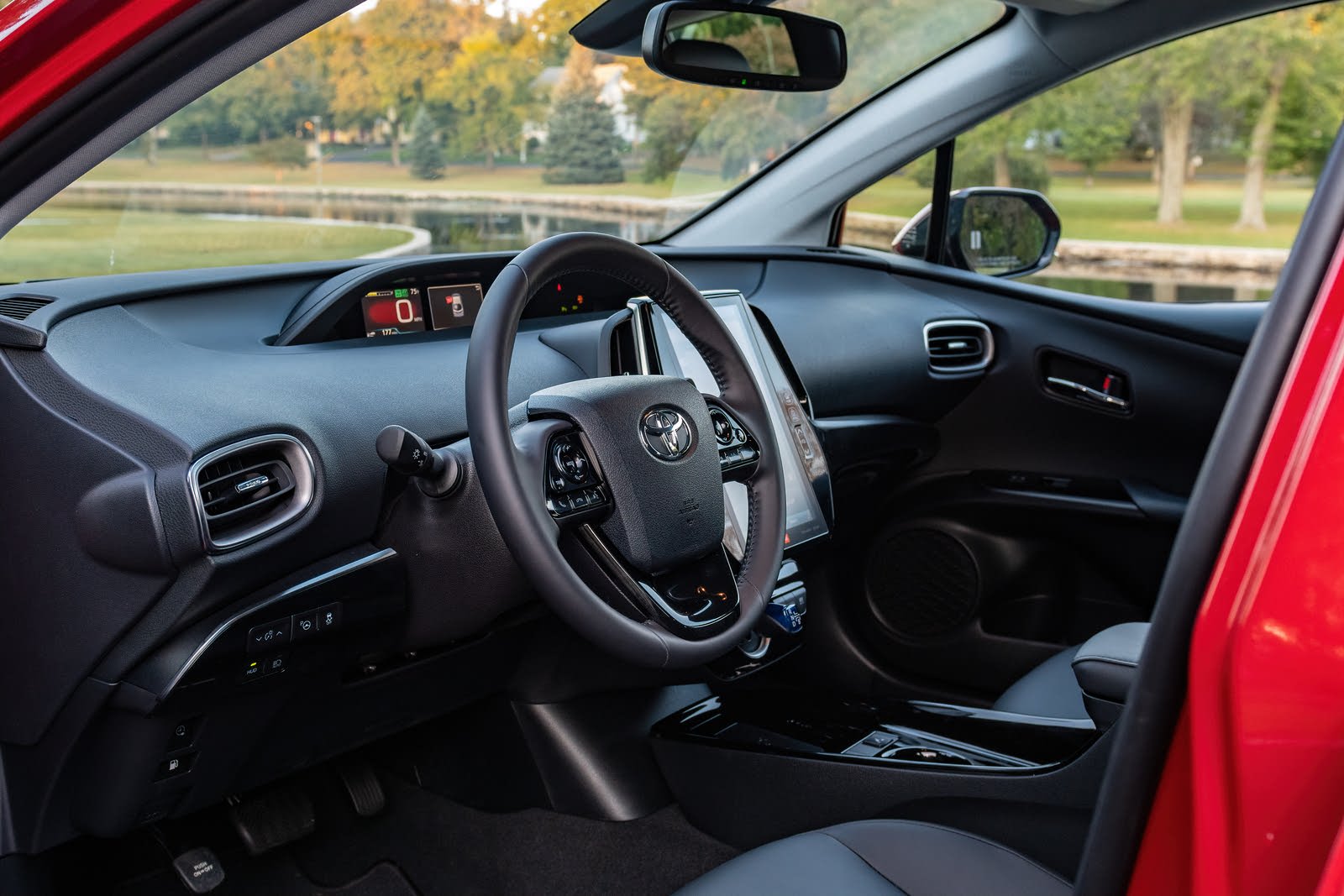 When the second-generation Prius debuted for 2004, Toyota, like a proud new parent embracing an unattractive baby, walked into the room like it owned the place. No other automaker was selling gas-electric hybrid cars, and most certainly, no shopper would seriously consider buying a car that looked like a soft-boiled egg.

But you know what happened: That soft-boiled egg dominated a segment that it helped create (alongside Honda, except it took Honda many more years to offer a 4-door hybrid with a backseat). The hybrid car market, saturated as it is now, is still owned by Toyota.

Wind-cheating aerodynamics and low friction are the products of Prius weirdness. Just look at the puny tires. At 195/65R15, they're the same size as the ones on my 1998 Volvo S70—and with a taller sidewall. No other new car has tires this small aside from a Mitsubishi Mirage. Skinny little tires don't create a lot of rolling resistance, which slows down the momentum of ordinary cars. The heavy rake in the windshield, exaggerated peak in the roofline, and flat body panels let air slip over the body like a polished stone skimming over water. That roofline peak also offers generous headroom and incredible visibility for all passengers. The rear hatch is made from carbon fiber to save weight and add strength. Every single design detail is made for ultimate efficiency and practicality.

I'd say the Prius Prime is the most attractive Prius in history. You might argue that's not saying much. But in Supersonic Red, this car has a presence the regular Prius lacks. That's because the Prime has unique front and rear styling. The front borrows futuristic cues from Toyota's hydrogen fuel-cell car, the Mirai, with four square LED headlights set into a squint. They're angled toward the polished black fascia and restyled lower air intakes. The taillights are also totally different—they seem to be fashioned after a sine wave—with vertical turn signals in the lower bumper. Pretty? No. But it's actually cool.

Inside, the Toyota goes after Tesla with an optional vertical touchscreen for the Prius Prime's upper trims that controls almost everything. Unfortunately, it still keeps the Prius hallmarks of centralizing the instrument cluster and incorporating graphics from first-gen DVD players. It's not good, helpful, or attractive. But the materials, fit, and finish are up to modern standards. For 2020, Toyota swapped the white-and-black interior with an all-black finish, and more importantly, added a center rear seat. You won't want to sit there, but the previous model year had room for only four passengers. 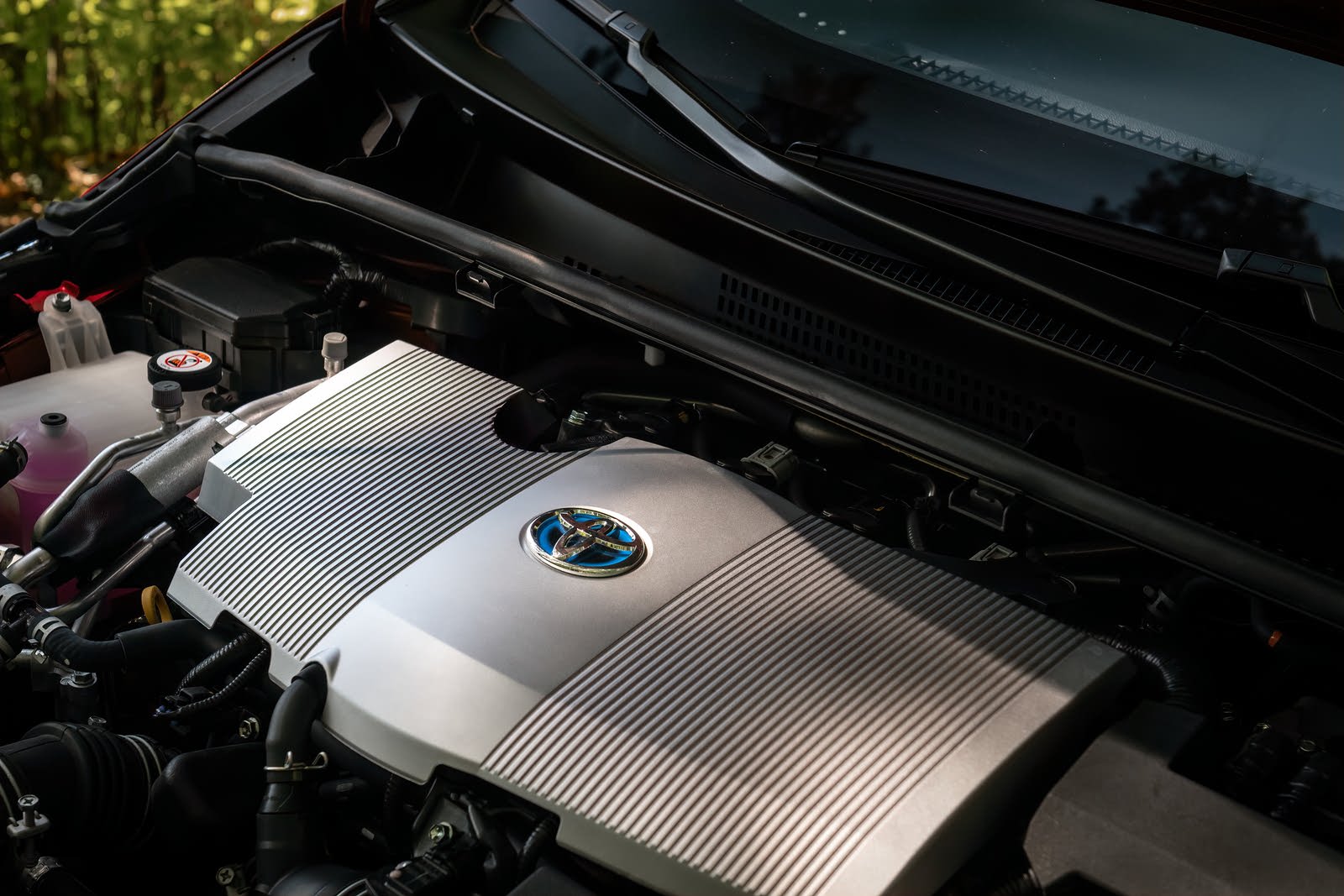 In terms of raw performance, the Prius would score a 4. Any car that needs more than 10 seconds to reach 60 mph isn't just slow, it's downright embarrassing. But the Prius Prime wasn't built to scare the pants off your passengers. It excels in quiet and seamless operation. The hybrid powertrain is so adept at monitoring fuel consumption and the driver's inputs. Even considering the car's sacrifice of power, its fuel economy is absurdly good. That's why, even after a week of heavy acceleration and sustained high speeds on the interstates, I was unsuccessful in my attempts to completely drain the gas tank. After 600 miles, I hit an indicated 55 mpg. Had I driven slower, I wouldn't have needed to fill up at the end of my week at all. This type of performance is damn near unbeatable. When it comes to saving fuel, this is a supercar.

The EPA rates the Prius Prime at 55 mpg city, 53 highway, and 54 combined once the battery pack's electric range has been depleted. That's just slightly lower than the most efficient regular Prius, the Eco, which can hit 58/53/56. But the Prime has several hundred extra pounds of battery that, when charged, help the Prime hit its estimated 25 miles of all-electric driving in fair weather and on moderate grades. The 8.8-kilowatt-hour battery can supply power to two electric traction motors, one of which is embedded in the continuously variable automatic transmission (CVT). Unlike the previous Prius Plug-In, the Prime can drive up to 84 mph in full EV mode without using the 1.8-liter 4-cylinder engine (don't ask me how I know). Combined, the gas engine and the electric motors output only 121 hp and an unspecified amount of torque. The torque isn't much, as the Prius Prime is considerably less peppy at city speeds than the Honda Clarity Plug-In or the Chevrolet Volt.

But the Prime's handling and steering are surprisingly improved over the old car. Credit the new chassis, which is stiffer and stronger, and a steering rack with more on-center feel. The tires will howl if you push the Prius too hard through a corner, but the brakes have a reassuring feel even though their sensation is actually one of the electric motors spinning backward to send electricity back to the battery.

Charging takes about 6 hours on a 120-volt household connection or 2 hours on a 240-volt Level 2 charging station. While the electric range is half that of the Volt and Clarity, the Prius Prime doesn't sacrifice any efficiency once that range depletes. At 133 MPGe (the gasoline-equivalent rating of the vehicle in electric mode), the Prius Prime tops every plug-in on sale. 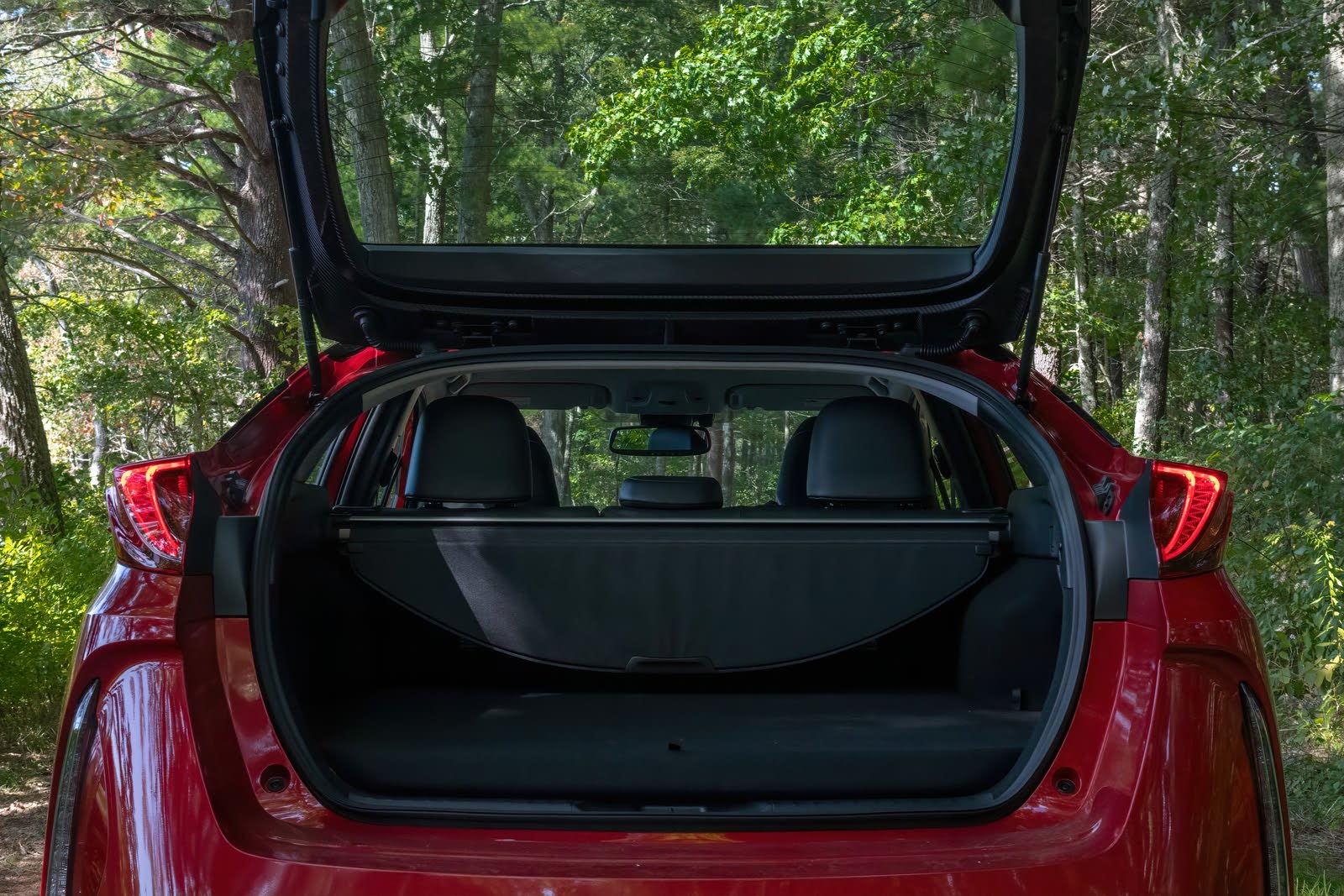 The Prime's larger battery eats 7 cubic feet of cargo space compared to the regular Prius, leaving it with a total of 20. You'll notice that the cargo shelf is higher. Passenger volume drops by about 1.5 cubic feet for a negligible decrease in leg, hip, and shoulder space. You won't notice that difference in the cabin. The Prime feels airy and comfortable for four passengers.

Unfortunately, the Prius Prime loses practicality points with Toyota's insistence on an outdated dashboard layout. The instrument cluster, reduced to a narrow strip away from the driver's direct line of sight, is just as bad now as it was in 2004. The speedometer features a massive readout, whereas the more important displays for the hybrid powertrain, stereo, and vehicle options are crammed into a tiny box. Next to that is a huge graphic of the gear selector pattern, a large "READY" icon indicating the car is running, a clock that looks like it was pulled from a VCR, and a scattering of icons tossed into the far right corner. It's arranged like a yard sale, where everything from the past 20 years has been crammed together on the curb. You won't even want to bargain. It's all junk. The big touchscreen isn't an ergonomic wonder, either. 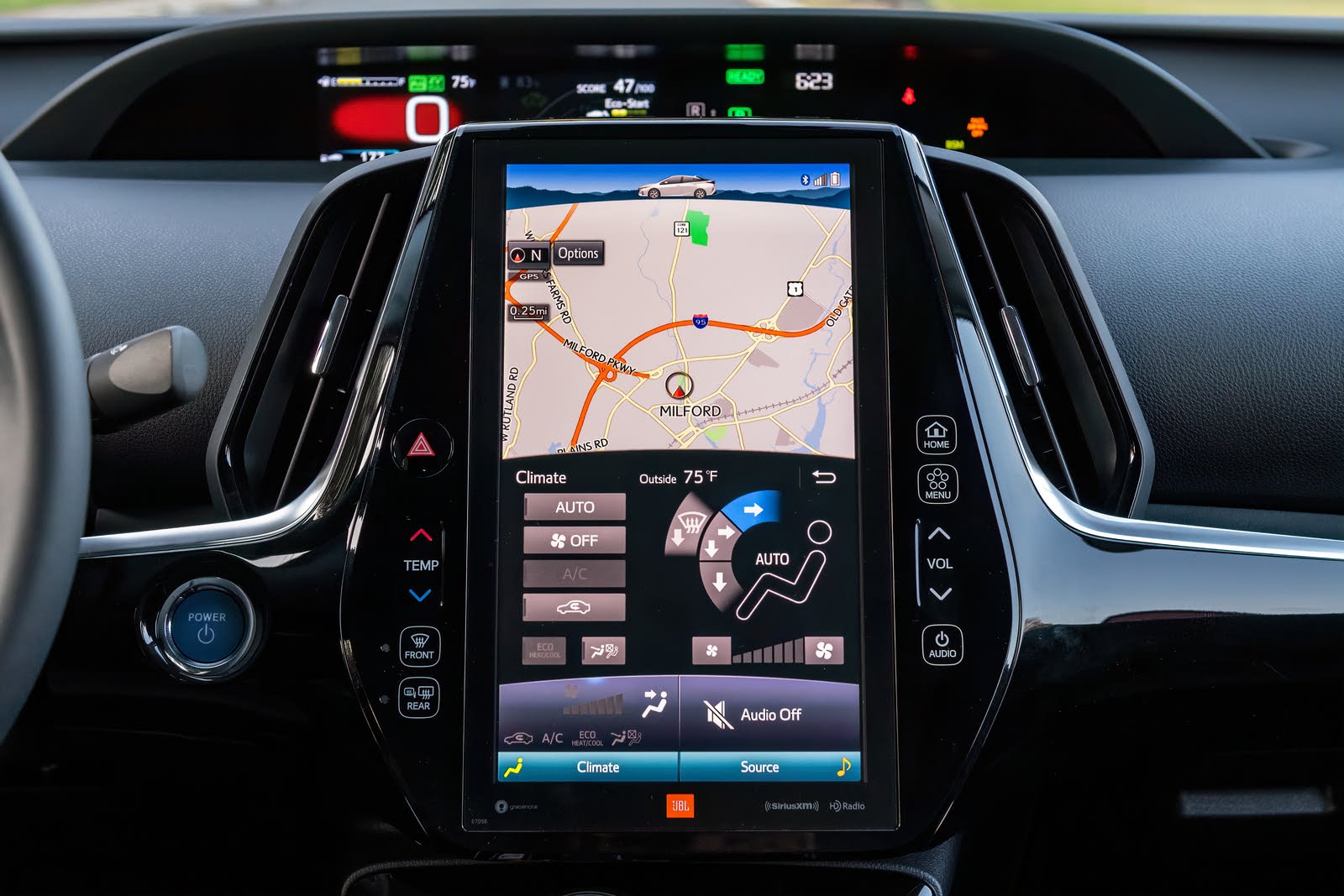 Toyota would appear to redeem itself with a portrait-oriented touchscreen measuring a massive 11.6 inches. It's standard on the XLE and Limited, but it's unavailable on the base LE. The display is soft, as if it's interpolating the lower resolution from Toyota's legacy infotainment software. You can't use it like a smartphone—no swiping left or right to bring up menus, no swiping down for any additional options. There's a top graphic showing a profile of the car that varies from a daytime scene to a night scene. A carousel of circular icons can be swiped up from the bottom to switch between settings, phone, navigation, and Apple CarPlay. That's the best and biggest change to an otherwise dated system that Toyota continues to deploy across its lineup. The maps are crude, sometimes they don't respond to pinch inputs to zoom, there are no onboard apps (they require a connected device loaded with Toyota's Entune software), and it's slow. The temperature controls are touch-sensitive buttons separate from the rest of the climate controls within the touchscreen.

Maybe there's some advanced semi-automated driving? Nope. The Prius Prime doesn't center itself on marked highways even though it comes standard with lane-keep assist and adaptive cruise control. The 2020 model adds two USB ports for rear passengers, yet those rear passengers don't get air vents, nor do they get cupholders in the central armrest. The LED headlights, head-up display (HUD), and the decent JBL stereo on my Limited test car were its only saving graces. 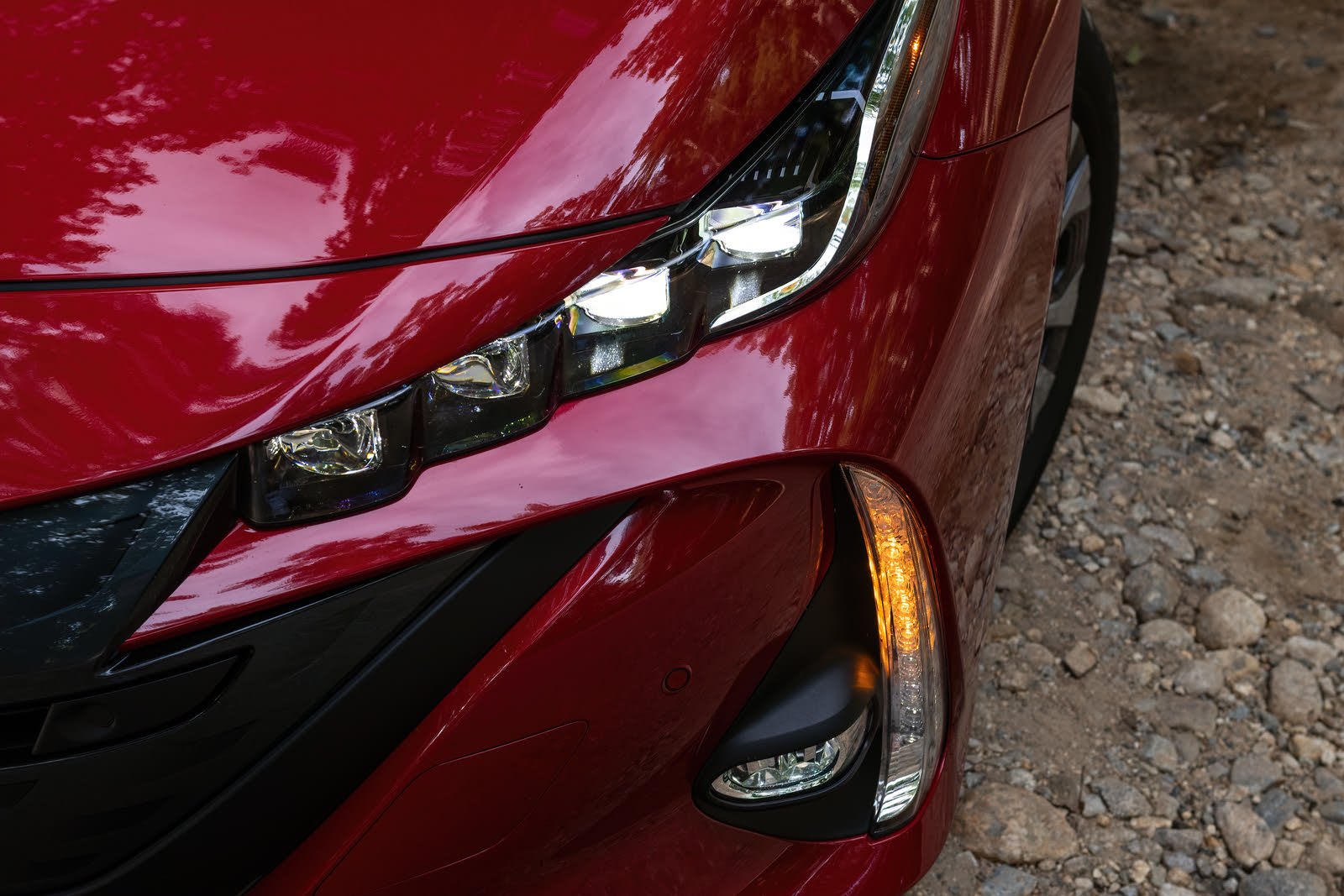 Neither the National Highway Traffic Safety Administration (NHTSA) nor the Insurance Institute for Highway Safety (IIHS) has crash-tested the Prius Prime. But both have tested the otherwise identical Prius, which for 2020 stands at five stars overall for NHTSA and a 2019 Top Safety Pick for the IIHS. There are some demerits hidden within those scores. In NHTSA testing, the Prius received four out of five stars for both driver and passenger in a head-on frontal crash, and just two out of five stars for the pole test, in which a narrow barrier smashes into the vehicle's side. On IIHS tests, it scored a lower Acceptable rating for the small front overlap test on the passenger's side. But overall, the Prius scored well. Forward emergency braking, pedestrian detection, lane-keep assist, and automatic high beams are standard. Blind-spot monitoring is included on only the Limited.

Three years of Toyota Safety Connect come standard, which can dial 911 automatically in a crash. Unique to Toyota models is an airbag mounted underneath the front passenger seat cushion, which the automaker says can help prevent that person from sliding forward in a frontal crash. 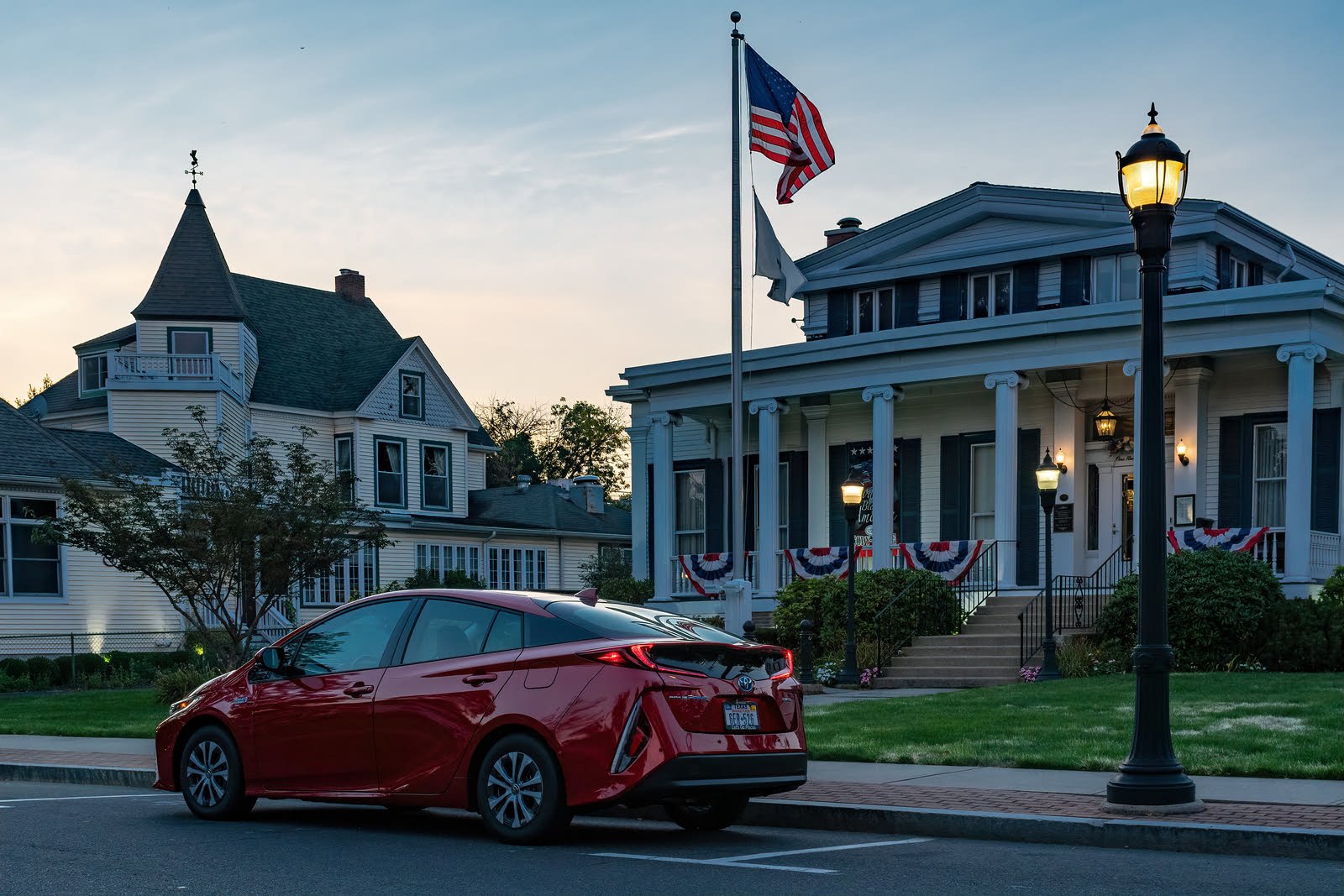 The 2020 Prius Prime starts at $27,750. Loaded with Supersonic Red paint for $425 extra, my Prius Prime Limited stickered for $35,425 including a $955 destination fee. CarGurus recommends the midgrade XLE, which starts at $29,650, for the best value. This trim includes the larger touchscreen, navigation, wireless charging, heated front seats, and keyless entry. Then, consider the standard ToyotaCare (2 years/25,000 miles of maintenance and 2 years/unlimited miles of roadside assistance) plus a federal tax credit that can lower your tax liability by $4,502. Even without that credit, the Prius Prime is a stellar car that handles long journeys, commutes, and short trips with Toyota's proven and near-perfect hybrid powertrain. From a consumer-electronics point of view, the Prime needs some serious work. But the car still functions just fine as-is. For comfort, convenience, and the ultimate in fuel economy, it's hard to pick another car.

What's your take on the 2020 Toyota Prius Prime?

MrKitty The Honda Insight is the closest competitor.

Have you driven a 2020 Toyota Prius Prime?
Rank This Car

Looking for a Used Prius Prime in your area?

I have been using the 110V charger that came with the car. Now I have installed a 220 V charger so I can recharge between trips when I will be going out again in less than 5 hours. But at night, I ...

Can I List A Car As A Private Seller?