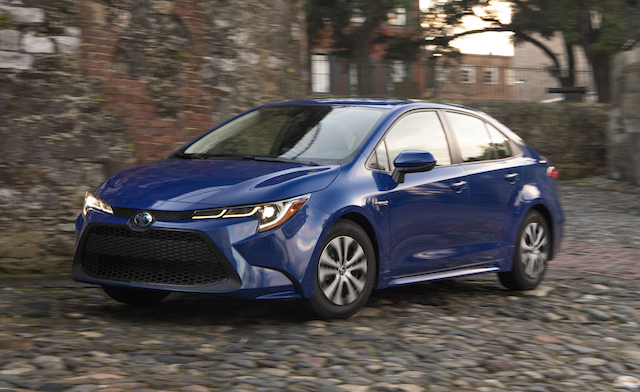 Looking for a New Toyota Corolla Hybrid in your area?

Average user score
5 ⁄ 5 stars
Based on 1 review
Review by Bob — The stated mileage was about 52 but doing much better in 650+ mile have put in $17 in gas still have FULL tank. Handles nice, Rides nice, very roomy, large trunk. Quality that GM can only dream about... Read more

For shoppers interested in hybrids, they now have another option from Toyota, with the introduction of the hybrid version of its compact 2020 Corolla.

The Corolla Hybrid’s styling has a lot in common with the non-hybrid 2020 Corolla, with the same aggressive J-shaped headlights, simplified window arrangement, stalk-mounted mirrors, and elegant rear end. That said, it gets a unique, smoother front bumper with a slightly curvier grille. The interior, meanwhile, comes from the recently released 2019 Corolla Hatchback, which focuses on minimalism and artful, upscale presentation. The Corolla Hybrid has ample room for five people.

All Corolla Hybrids are motivated by a 1.8-liter inline 4-cylinder engine, coupled to an electric motor and continuously variable automatic transmission (CVT), putting out a combined 121 horsepower. Aside from the efficient powertrain, there are a number of technologies onboard that boost fuel economy further. Regenerative braking, which recaptures kinetic energy while decelerating and converts it to battery power, comes standard along with low-rolling-resistance tires, and S-FLOW, which optimizes airflow throughout the cabin to lessen the reliance on the air-conditioning system. The Corolla Hybrid provides three driving modes: Normal, Eco, and Sport. Like the Prius, the Corolla also features an EV mode that lets you operate the car using only electric power for a short distance. The Corolla Hybrid has fuel-economy estimates of 53 city, 52 highway, and 53 combined.

Like other Toyota models, the level of standard equipment is generous, thanks to the Toyota Safety Sense 2.0 system. Every Corolla Hybrid gets forward-collision warning with automatic emergency braking and pedestrian detection, full-speed adaptive cruise control, lane-keeping and lane-tracing assist, automatic high beams, and traffic-sign recognition. While the 2020 Corolla Hybrid hasn't yet been tested, the 2019 Corolla earned a 5-star rating from the National Highway and Traffic Safety Administration (NHTSA).

What's your take on the 2020 Toyota Corolla Hybrid?

Have you driven a 2020 Toyota Corolla Hybrid?
Rank This Car

Enter your zip to see incentives for a new Corolla Hybrid in your area.

Looking for a Used Corolla Hybrid in your area?

Can I Sell My Car On Car Gurus If It Is Leased?

Why Does Speed Omerter Not Show My Speed. W

Why does my digital speed omerter display no message . When the speed has been displayed for the last 5mths .

Car Testing And Review Of The 2020 Corolla Hybrid

I would like to know when you may have a driving review for the Toyota Corolla Hybrid, 2020. I would be interested in your impression of safety, performance and features that may be more outstanding....

I’m about to buy a new car. We’ve pretty much decided on the Toyota Corolla Touring Sports, which is a hybrid estate car. Typically we use the car 2-3 times a week for distances of 5-25 km, some ...