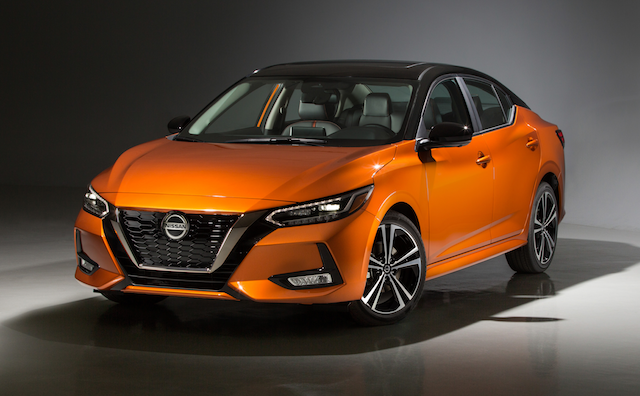 For 38 years, Nissan has peddled the Sentra as its definitive starter car. It’s a household name like Civic, Corolla, and Jetta—all of which are brand-new or have been refreshed in the last couple of years. The eighth-generation Sentra has the look of a larger, more luxurious car. It reflects major upgrades in style, technology, and driving dynamics. Compact sedans have a high bar to clear, even at $20,000. The 2020 Sentra delivers in every respect. 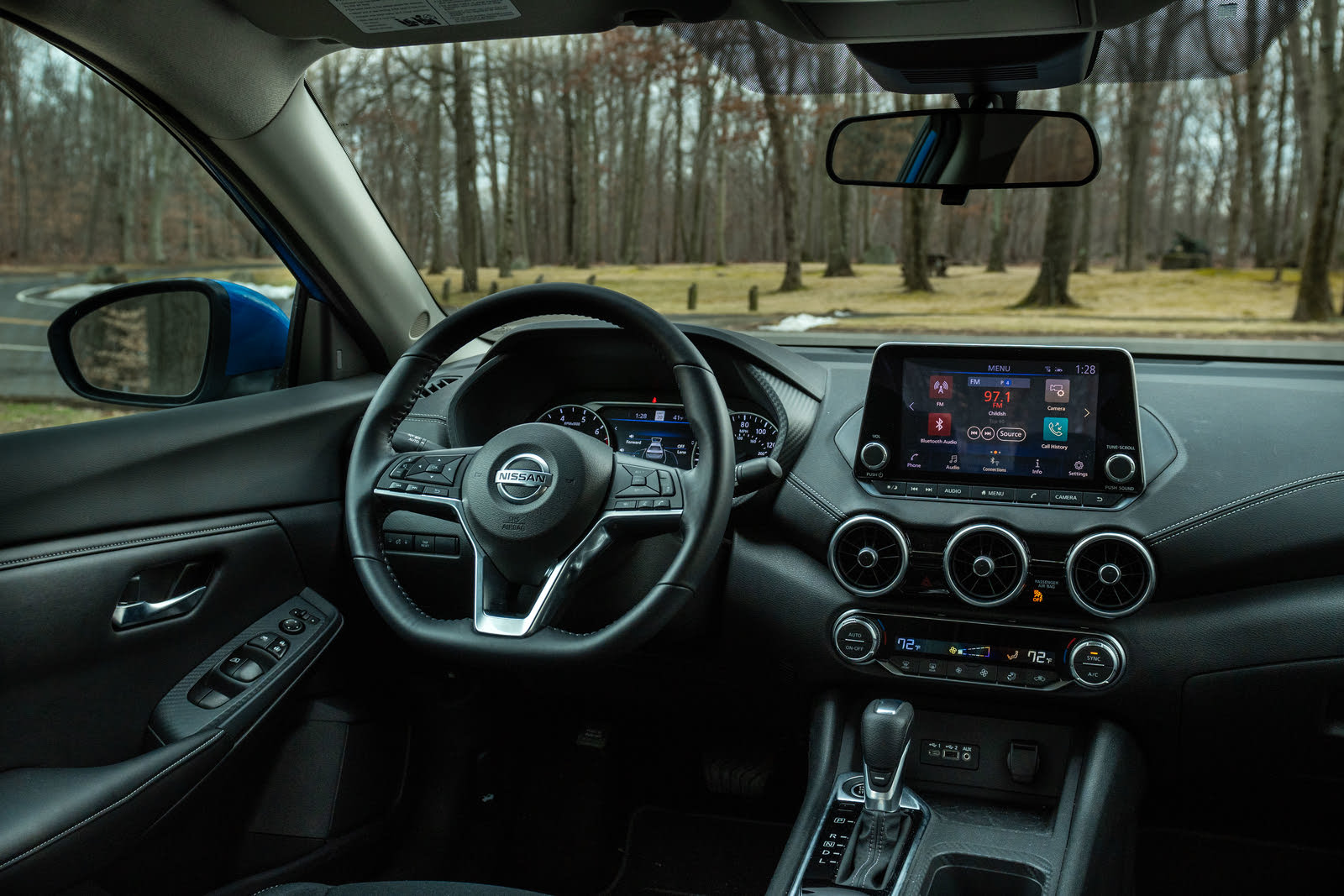 Looks have never been the Sentra’s strong suit. I have personal favorites: the outgoing 2019 Sentra NISMO, the early 2000s Sentra SE-R, and the late '80s Sentra Sport Coupe. But most of the millions sold over the past four decades were dowdy, plain, and proudly cost-conscious. Now I can say that I like being seen in a Sentra, especially covered in my test car’s Electric Blue paint. Mine wasn’t loaded, either. I drove a mid-level SV with the smallest 16-inch alloy wheels, halogen headlights, and all-black cloth interior. Drab? Not at all.

The 2020 Sentra is a scaled-down Altima, which is one reason it feels bigger than it is. Whereas the new Versa is a scaled-down Sentra, that car is noticeably tighter in every dimension and has the front-heavy proportions of an economy sedan. It’s a good choice, but the Sentra has the poise of a rear-wheel-drive car. The hood, even at the windshield pillars, is below waist height. The new car is 2 inches lower and wider than the last version. It has enough length to craft a memorable shape, and all the creases in the sheet metal that elegantly fade and reappear from front to rear look expensive. That’s because 10 years ago, it was impossible to manufacture such detailed stampings at low cost. Even the regular headlights have a jeweled construction, and the optional LEDs are simply hot. Nissan’s V-shaped grille motif has never looked better. It’s mature and very recognizable. The SV Premium Package comes with 17-inch wheels, while the SR finishes off with 18s and fog lights. Now everyone is going to like the way the Sentra looks—I guarantee it.

The interior steps up the Sentra’s class. The only bad parts are the hard plastic upper panels on the rear doors (they’re padded rubber in front) and flimsy window and mirror switches. Otherwise, the flat-bottom leather steering wheel and white-stitched leatherette dash feel like they could be from cars costing $30,000 and higher. The climate knobs are knurled and have a fine tactile feel. The three circular air vents have more silver brightwork around them, and the way the dash curves and stretches over each vent is worthy of entry-level luxury cars like the Mercedes-Benz CLA. Even the base gauges and touchscreen look the part, but on my car, the larger touchscreen and expanded screen in the instrument panel are worthy upgrades. Better still is the SV Premium Package, which offers quilted tan leather on the seats and tan leatherette on the console, doors, and dash. It’s Infiniti-grade. When you realize it costs only a couple grand more, you’ll be floored. The hard plastic on the lower portions of the dash and console are good, too. Fit and finish in this class is right up there with the Mazda3's, arguably the classiest looking non-luxury compact interior to date. But the Sentra is close. 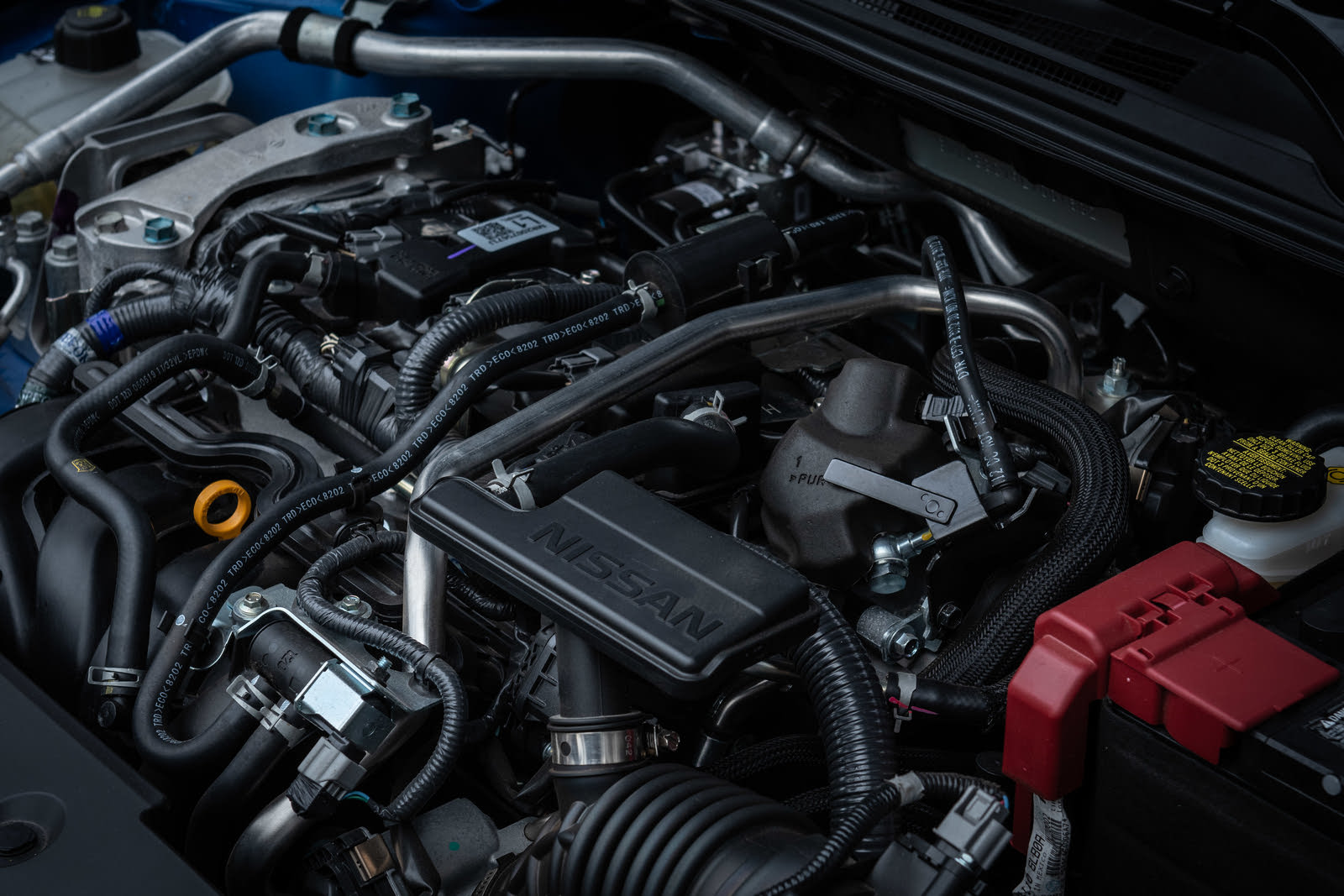 Say goodbye to turbocharged engines, manual transmissions, and the sport-tuned NISMO trims. They might return, and then again, they might not. Nissan isn’t exactly swimming in cash lately, what with its former CEO in exile over in Lebanon, so it’s concentrating on volume models to attract the most buyers. A 2.0-liter inline 4-cylinder makes 149 horsepower and 146 pound-feet of torque, sent to the front wheels via a continuously variable transmission (CVT). Only two competitors—the Mazda3 and Subaru Impreza—offer all-wheel drive (AWD), which is still a rarity in this segment. Acceleration tapers off after 30 mph, and part of that is due to a throttle pedal I found to be overly sensitive. It can make the car jumpy in traffic. Pressing the Eco button to the left of the steering wheel subdues that antsy behavior without dulling the response too much. Sport mode will hold the revs longer and can be activated from an unmarked button on the shifter knob. In any mode, the CVT is very good at mimicking the gear changes of a conventional automatic even without a manual mode or shift paddles. It’s always smooth and responsive. Engine noise and vibration are kept mostly at bay.

Steering response and handling are also high points. Nissan replaced the torsion beam rear axle with an independent suspension that keeps those wheels more controlled. Cornering is flat, and ride quality very agreeable (remember, I had the standard 16-inch tires; larger tires may degrade the ride). The steering is quick with good on-center feel. Is it very sporty? Not at all. But in the Sentra, you always feel in charge and like the car’s chassis (and its brakes) are there to support you as a driver.

Fuel economy is EPA rated at 29 mpg city, 39 highway, and 33 combined (the SR delivers 1 mpg less in the city and combined and 2 less on the highway). That’s very good. I averaged about 30 mpg during mixed driving over 300 miles. 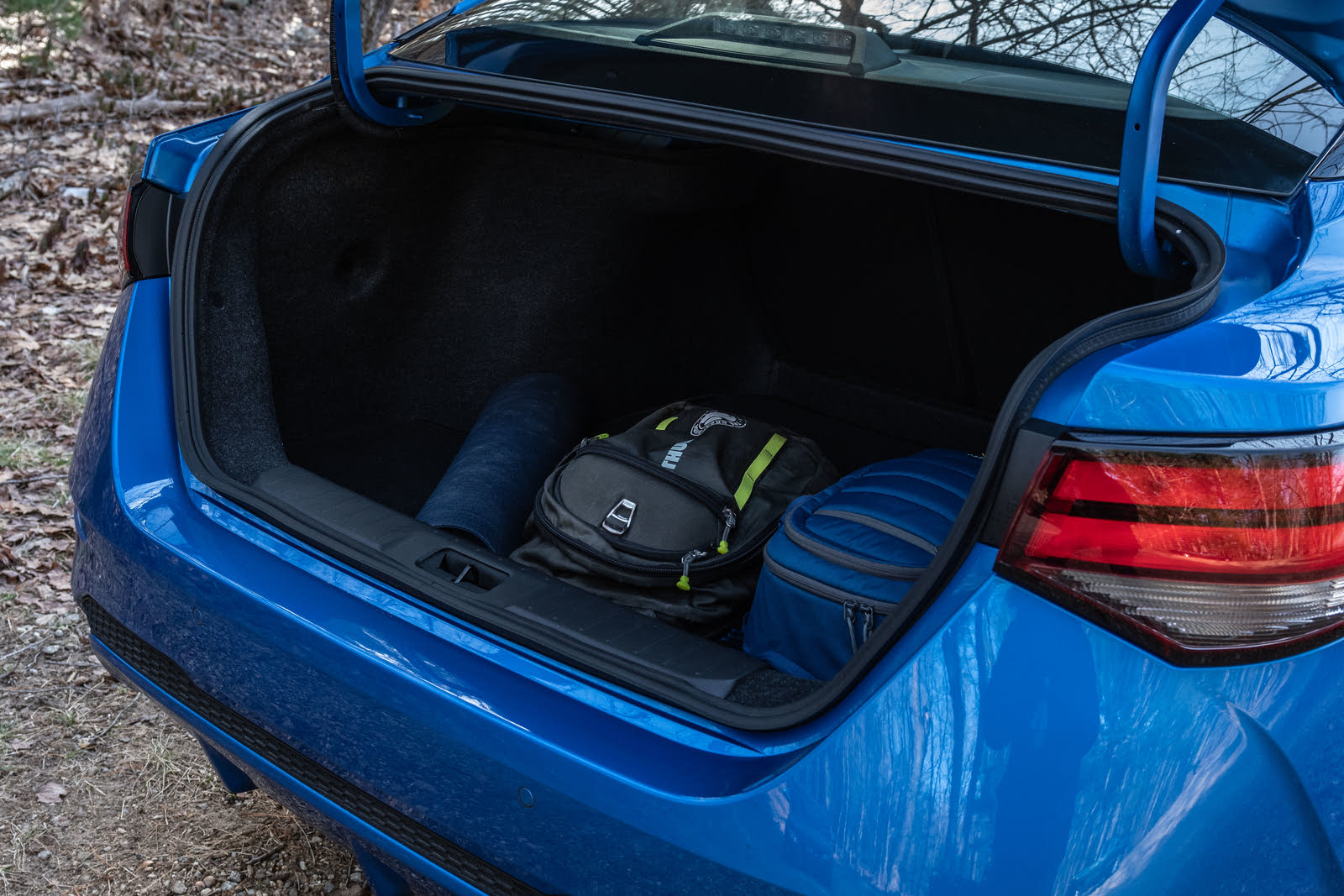 The Sentra’s backseat is surprisingly useful. This is why you buy a compact sedan instead of a subcompact like the Versa. I’m 5-foot-11 and never bunched my knees against the front seat or rubbed my head on the roof (which is scalloped to accommodate tall noggins). The front seats use Nissan’s Zero Gravity cushioning, which the company claims will reduce pressure on muscles and hence reduce fatigue. They worked for me on my 2-hour drive from Manhattan to southern Connecticut.

In keeping with the Sentra’s lowered body profile, the windowsills are low enough to make side visibility a snap. But the rear window is another story. It’s raked so much that it doesn’t offer much of a view, and what view there is gets blocked partially by the headrests. Often I couldn’t tell there were cars following me closely—and in New York City traffic, they sure as hell were. The rear-view mirror was also fuzzy when I manually adjusted it to a tinted night view (only the SR gets an auto-dimming mirror). Otherwise, the driving position and all controls fall easily to hand. There isn’t much to control, and Nissan uses knobs for volume and tuning—even for adjusting the stereo’s tone. That’s how it used to be in older cars, and it’s perfect here, too.

Trunk space measures 14.3 cubic feet, which is down a few tenths from the outgoing Sentra. Regardless, it’s large for a small car and the seatbacks fold. You’ll be comfortable inside. 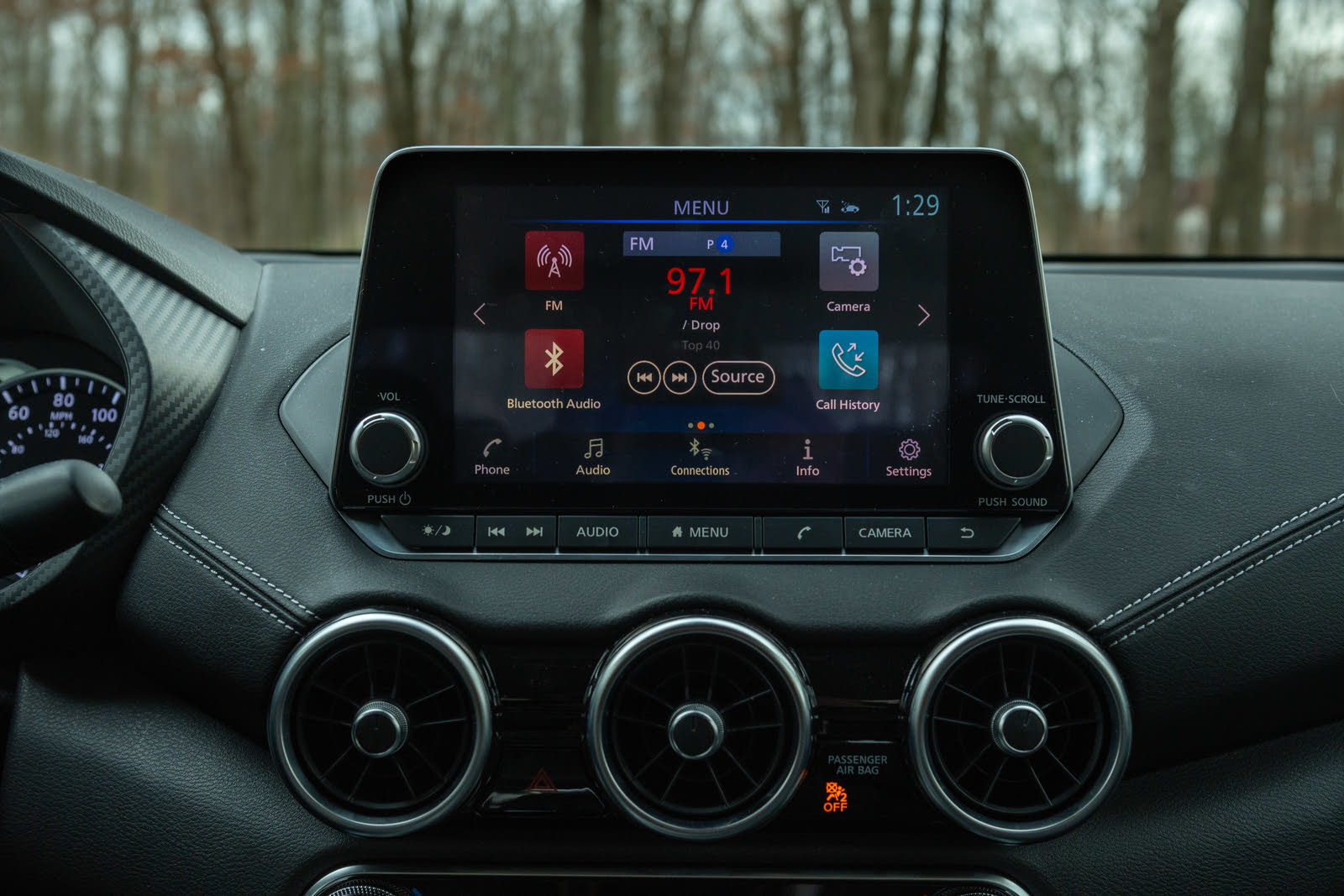 Nissan doesn’t offer ProPilot, its semi-automated driving function for marked highways, on the Sentra as it does on the Leaf, Rogue, and Altima. It really should be an option here, because in those cars it works quite decently compared to systems from luxury automakers. Navigation and wireless charging are also not offered, but Apple CarPlay, Android Auto, Amazon Alexa, and WiFi come standard on the mid-level SV, which also brings two more USB ports (including USB-C) and the larger screens. Bright LED headlights are available only in the SV Premium Package or the SR. My car also didn’t have the Bose stereo, sunroof, heated front seats, heated steering wheel, or 360-degree cameras. The SV does come with dual-zone climate, proximity-entry key, adaptive cruise control, and remote engine start. A full suite of driver-assist features comes standard. Otherwise, it’s a basic affair inside the Sentra, and for the price, that’s just fine. 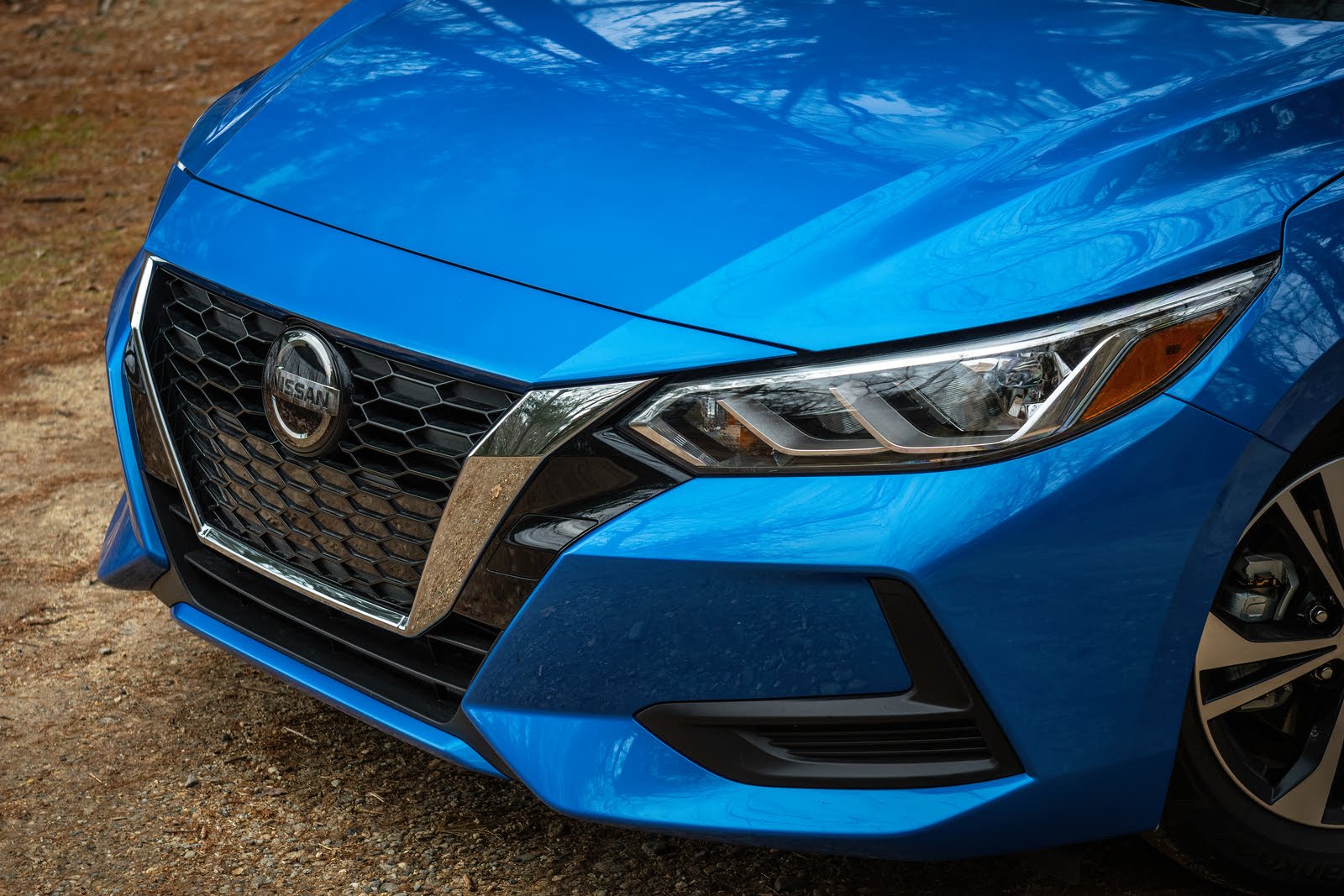 Neither the National Highway Traffic Safety Administration (NHTSA) nor the Insurance Institute for Highway Safety (IIHS) has crash-tested the 2020 Sentra. CarGurus expects top ratings in all categories. Nissan includes rear side airbags, a rare feature even in luxury cars, and knee airbags for the driver and front passenger. Most compact cars don't have at least three of these airbags. Nissan also includes forward and reverse emergency braking, pedestrian detection for the front, blind-spot monitoring, rear cross-traffic alert, lane-departure warning, and auto high beams on every Sentra trim. A driver attention monitor is also standard. 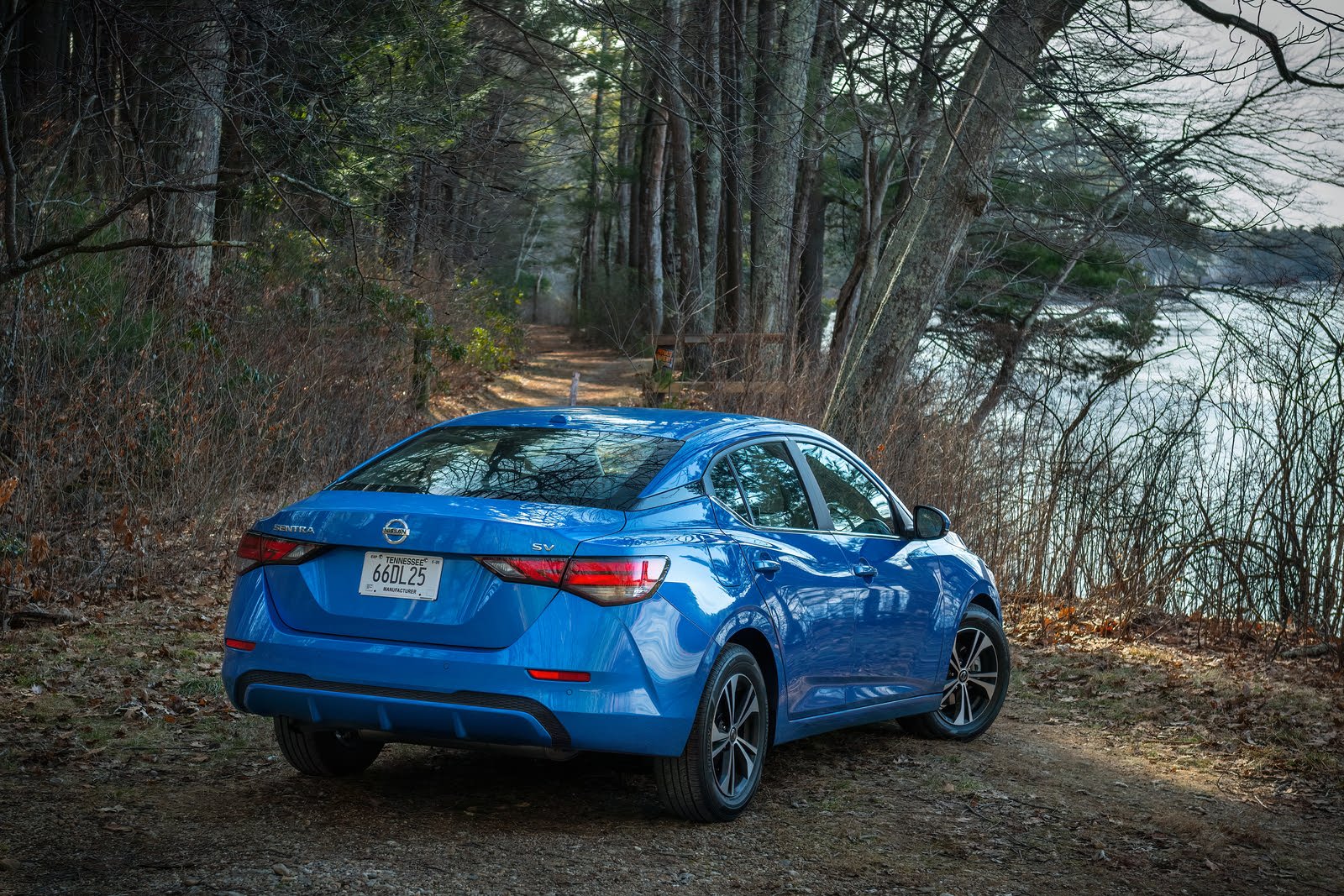 The 2020 Sentra starts at $19,090 for the S, $20,270 for the SV, and $21,430 for the SR. Fully loaded, its MSRP is $23,600. That’s thousands below what Volkswagen, Honda, and Toyota charge for their top cars. Granted, the Sentra is missing some higher-grade equipment—like higher-performance engines—that these competitors offer. But the value the Sentra provides is undeniable. Its style, refinement, and driving dynamics have so improved that the Sentra, at a lower price than its rivals, doesn’t feel shortchanged one bit. For that reason, CarGurus recommends buying a Sentra SV like my test car and ordering the SV Premium Package I didn’t have, which stickers for $23,655 with destination. Sportier drivers should buy the Civic Sport or Si, the Jetta GLI, or the Corolla Sport—all of which are vastly more fun. For most people, the Sentra will be hard to fault.

GuruFB1BQ I don't like the above the dash level screen

Guru9X9X62 Recently purchased 20 sv model. Coming from 17 forte lx base, it is like I bought an Infiniti. I love the interior quality and dash layout. Simple and efficient while providing plenty of features. Before 2020 I would not have dreamed of purchasing a Sentra but this new gen is like driving a small Maxima (without the hp of course).

Have you driven a 2020 Nissan Sentra?
Rank This Car

Where Do I Report A Dealership That Changes The Price From What Is Advertis...

Ziegler in Lindenhurst, IL increased the price of the car I was interested in from the advertised price on your website. The car was listed at $20,150. When I sat down to fill out the paperwork th...

Buy A Car From A Relative

Can I buy a car from a relative?

How Has Nissan Addressed Their CVT Reliability Issues?

Just wondering if Nissan has shared any information about improvements to their CVT reliability issues. This is a really nice to car but I am hesitant to move forward without details regarding how t...

How Do We Price A Car With No NMVTIS Record?

Having a problem pricing this car. It has a clean CarFax, clean AutoCheck, no history of accidents. It's basically a new car that was rolled back so there is no history of a new registration thus no...