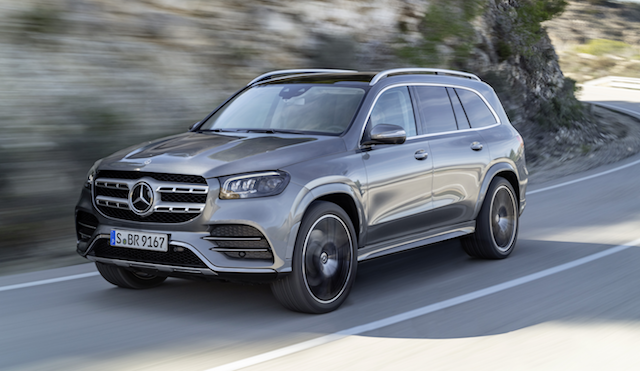 The GLS-Class is Mercedes-Benz's largest SUV, with seating for up to seven people across three rows. It competes with newcomers like the BMW X7 as well as recognizable nameplates like the Land Rover Range Rover and Lexus LX. For 2020, it gets a complete redesign.

The exterior of the GLS-Class features soft and simplified styling that is right in line with the brand’s recent GLC-Class and GLE-Class models. That said, it’s larger than the model it replaces. Notably, a 2.4-inch longer wheelbase contributes directly to increased legroom in the second row. Inside, the dashboard, which is lifted directly from the GLE-Class, features strong horizontal themes. There are blocky elements throughout the rest of the cabin that emphasize the GLS-Class’s mission of capable luxury.

Powertrains for the GLS-Class are new and all feature electric power to some extent. The base GLS 450 incorporates a new turbocharged 3.0-liter inline 6-cylinder engine with a 48-volt electrical system, making 362 horsepower and 369 pound-feet of torque. The GLS 580 houses a turbocharged 4.0-liter V8 engine that makes 483 hp and 516 lb-ft. With EQ Boost, both engines can get an additional 21 hp and 184 lb-ft for short periods. Both engines come with a 9-speed automatic transmission and all-wheel drive (AWD). Every GLS-Class gets a standard self-leveling air suspension. An optional active body-control system is available for added agility. As of this writing, fuel-economy ratings aren't available.

Technology is the name of the game with modern luxury SUVs, and the GLS-Class has it in spades. The driver cockpit features two high-resolution 12.3-inch screens, one doing duty as the instrument cluster, the other handling infotainment functions. The infotainment screen responds to touch, gestures, and a controller in the center console. Mercedes-Benz also includes an artificial intelligence feature that anticipates your actions and preferences based on previous behaviors. There’s even a clever function that prepares the GLS-Class for entry into a car wash with the press of a button.

For the first time, you can transform the SUV into an opulent 6-seater with the second-row captain’s chair package. Meanwhile, the third-row seats were designed to accommodate people up to 6.4 feet tall and can be optionally equipped with heat and USB ports. Safety features include traffic-sign recognition, blind-spot monitoring, and adaptive cruise control with traffic-jam assist. As of this writing, the 2020 GLS-Class hasn't been crash-tested by the Insurance Institute for Highway Safety (IIHS).

The new 2020 Mercedes-Benz GLS-Class is a large, full-featured SUV with a new look.

What's your take on the 2020 Mercedes-Benz GLS-Class?

Guru9DHKVF ...just getting started, with my purchase on November 6, 2020. I will be returning soon to update my expected enjoyment.

Have you driven a 2020 Mercedes-Benz GLS-Class?
Rank This Car