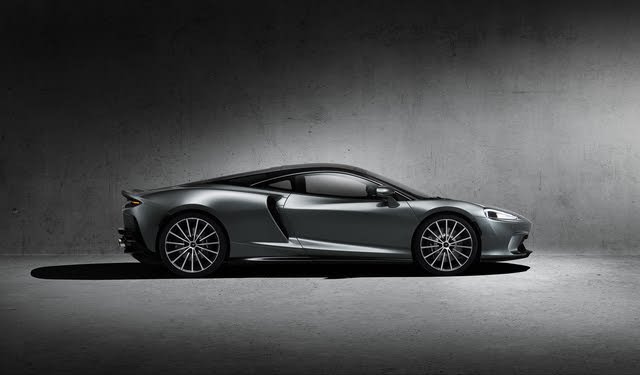 The entry-level McLaren, if such a thing can be said, is the $213,000 GT. It is one of many mid-engine supercars made by the small English automaker and is McLaren's most comfortable and practical vehicle. When compared to the company's $1 million Senna, yes, such things can be said about the GT.

The two-seater is an evolution of the discontinued 570GT, the more civil version of the 570S which was new in 2016. The GT is longer, more powerful, and reimagined to compete with larger, heavier Grand Touring exotics like the Bentley Continental GT and Aston Martin DB11. To that end, visibility is good despite the raked rear glass and low stance. The rear cargo shelf holds an astonishing 15 cubic feet, in addition to the front trunk's five. That's impressive for a car with swing-up doors and the capability to reach 60 mph in under three seconds. Trunk space is optimized with McLaren's fitted luggage, but do beware of how hot it gets. The cargo, after all, sits above the engine.

Other luxury features include a panoramic moonroof that can electrically dim, seats that aren't rock-hard, an interior that is somewhat quiet at speed, soft Nappa leather, cashmere, and a Bowers & Wilkins stereo. A 7-inch portrait touchscreen handles most of the controls. Navigation is standard. The wheel wells have liners, the Pirelli tires have noise-abating tread, and there is ambient lighting. McLaren, which also runs one of the most successful Formula One racing teams, views these common features as excessive. The GT is the one concession in a lineup full of race cars with license plates.

Performance is certainly excessive, with a twin-turbo 4.0-liter V8 driving the rear wheels and very wide tires. With 612 horsepower, 465 pound-feet of torque, and seven gears, the GT is an explosive machine by any measure. It is also a softer-riding McLaren with four adjustable suspension settings. But in reality, the car is still stiff, low, and loud. Fuel economy is EPA-estimated at 15 mpg city and 21 mpg highway.

It is best to buy a larger GT like the BMW M8 if you want to go as fast but with superior comfort, usability, and technology. Other competitors include the Ferrari Portofino, Lamborghini Huracan, Audi R8, and Porsche 911 Turbo.

Users ranked 2020 McLaren GT against other cars which they drove/owned. Each ranking was based on 9 categories. Here is the summary of top rankings.

Have you driven a 2020 McLaren GT?
Rank This Car