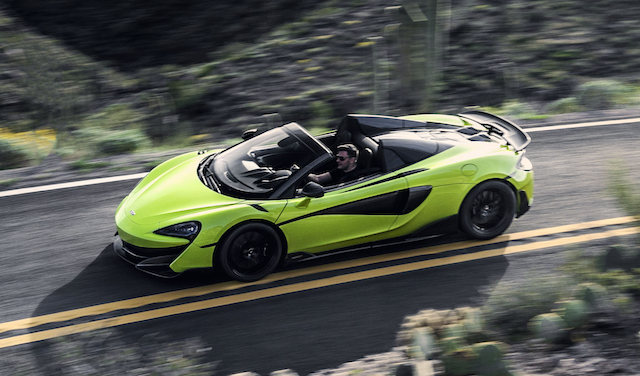 McLaren’s entry-level Sport Series of supercars starts with the 570S, and at the top of the Sport Series ladder sits the 600LT. For 2020, McLaren unveiled an open version of the 600LT at the 2019 Detroit Auto Show called the 600LT Spider.

Behind the seats sits a 3.8-liter version of McLaren’s proprietary twin-turbocharged V8 engine. In the 600LT, the engine makes 592 horsepower and 457 pound-feet of torque driving the rear wheels via a 7-speed dual-clutch automatic transmission (DCT) with paddle shifters. The 600LT Spider can hit 60 mph in a blistering 2.8 seconds. With the top down, the Spider can reach a top speed of 196 mph. With the roof up, it can reach 201 mph.

McLaren’s impressive carbon-fiber Monocell II chassis is very light, but it’s also very strong. So strong, in fact, that McLaren reportedly didn’t have to add any additional bracing or strengthening when turning the 600LT into a convertible. Its fixed rear wing makes over 220 pounds of downforce at 155 mph. Carbon-ceramic brakes come standard, and Pirelli developed a version of its P Zero Trofeo R track tires specifically for the 600LT.

At the push of a button, the 600LT Spider’s retractable hardtop raises or lowers at speeds up to 25 mph in just 15 seconds. On the inside, both Coupe and Spider feature a snug-fitting carbon-fiber racing seat and lots of Alcantara.

The option of an open top broadens the appeal of the 600LT. It competes with the Porsche 911 GT3 RS, Lamborghini Huracán Performante, and the Ferrari 488 Pista.