The MINI Cooper is an historic icon, and in 2020 it takes a step toward the electric future. 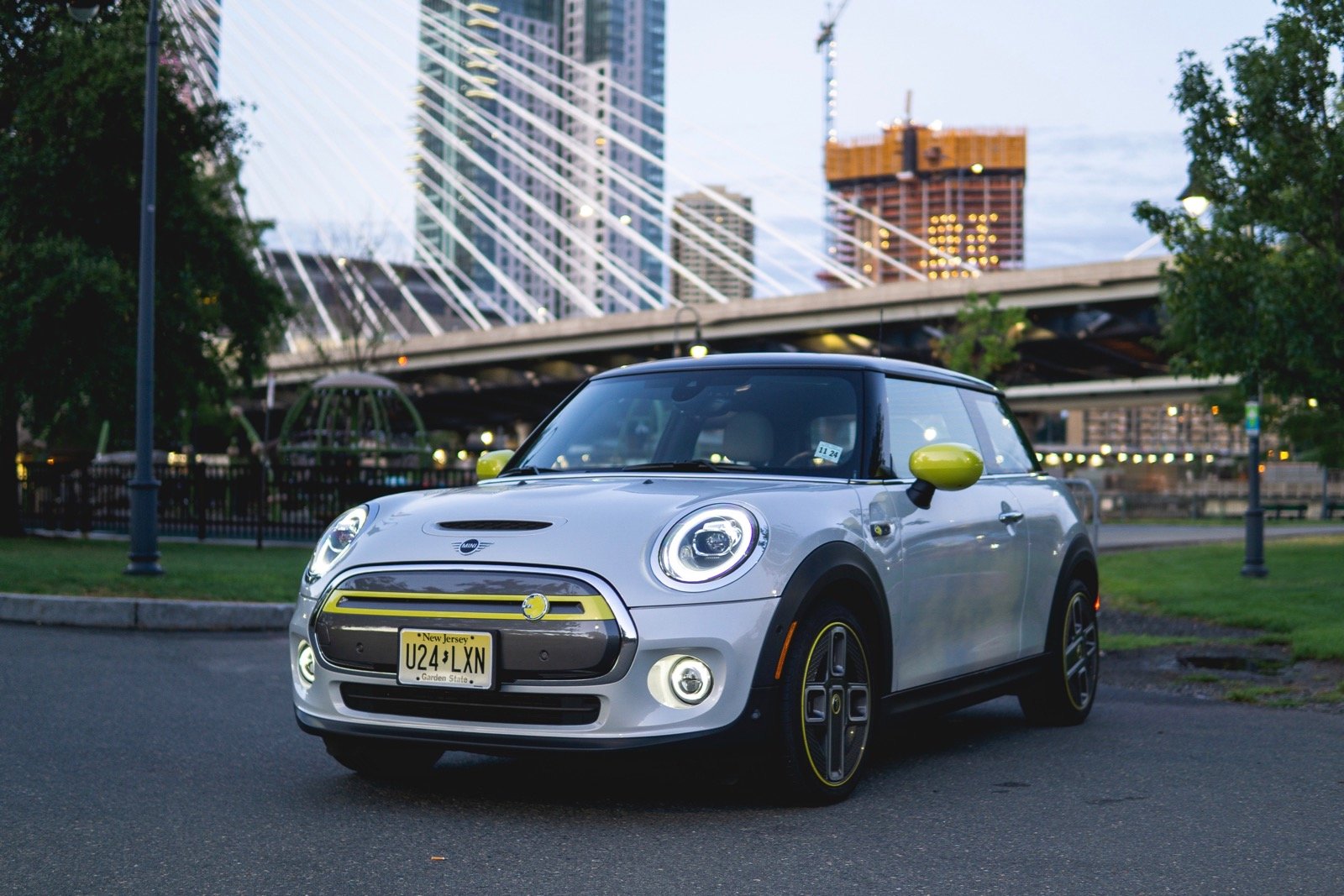 The MINI Cooper showcases timeless design and encourages even the timidest driver to live out their inner Mario Kart fantasies. With a short wheelbase, low curb weight, and torquey engines, the MINI Cooper delivers more smiles per square foot than most competitors. And with a new electric powertrain option, it can do so with a green footprint, too. 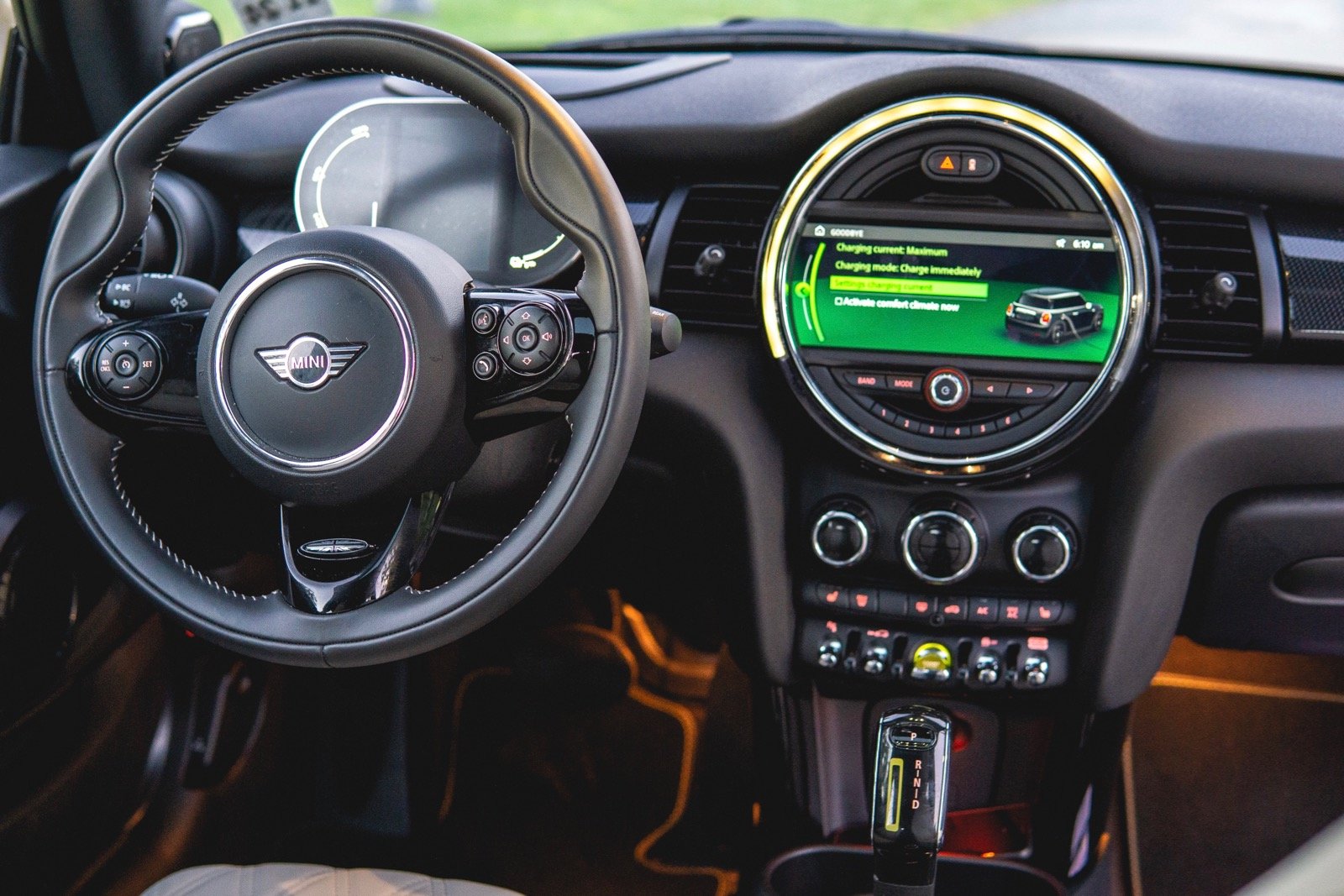 The 2020 Cooper looks like nothing else on the road—or at least nothing else not wearing a MINI badge. The wide-eyed headlights up front flaunt LED rings. The front grille grins. The color options are vibrant. The Union Jack taillights are a real crowd-pleaser. Based just on its styling, the Cooper is a certified enthusiast machine. Yet, it would never be called wasteful or gaudy. It drips charm and invites praise.

While it originally came as only a two-door hardtop, the MINI Cooper has evolved. First, there was a convertible variant. A four-door body style came later. Now, MINI has introduced an all-electric Cooper: the SE trim. MINI markets this one as offering similar levels of performance and refinement as the sweet-spot S trim, but with a battery and electric motor in place (thus, the “E” addition to the “S”

For this review, we tested the SE—we’ve spent significant time behind the wheel of previous-year, gas-powered Coopers. Design-wise, the SE mimics much of what you’ll find on a “regular” Cooper S. The key difference is that the SE sits slightly higher off the road to accommodate the battery cells positioned under its floor. And of course, you can buy an SE with a unique paint scheme and interesting EV-exclusive wheels, designed to evoke a European-style electrical outlet. Otherwise, it’s tough to tell the difference between the electron-fueled MINI and its gas-powered brethren.

Inside, the Mini Cooper’s design remains dominated by circles. The speakers, air vents, and door handles are all circular. And, between the front seats, a massive circular housing surrounds the touchscreen infotainment system (also controllable via a circular rotary dial between the seat cushions). Overall, the Cooper delivers a premium feel. In fact, it’s safe to say this level of refinement is unmatched in cars of its size. 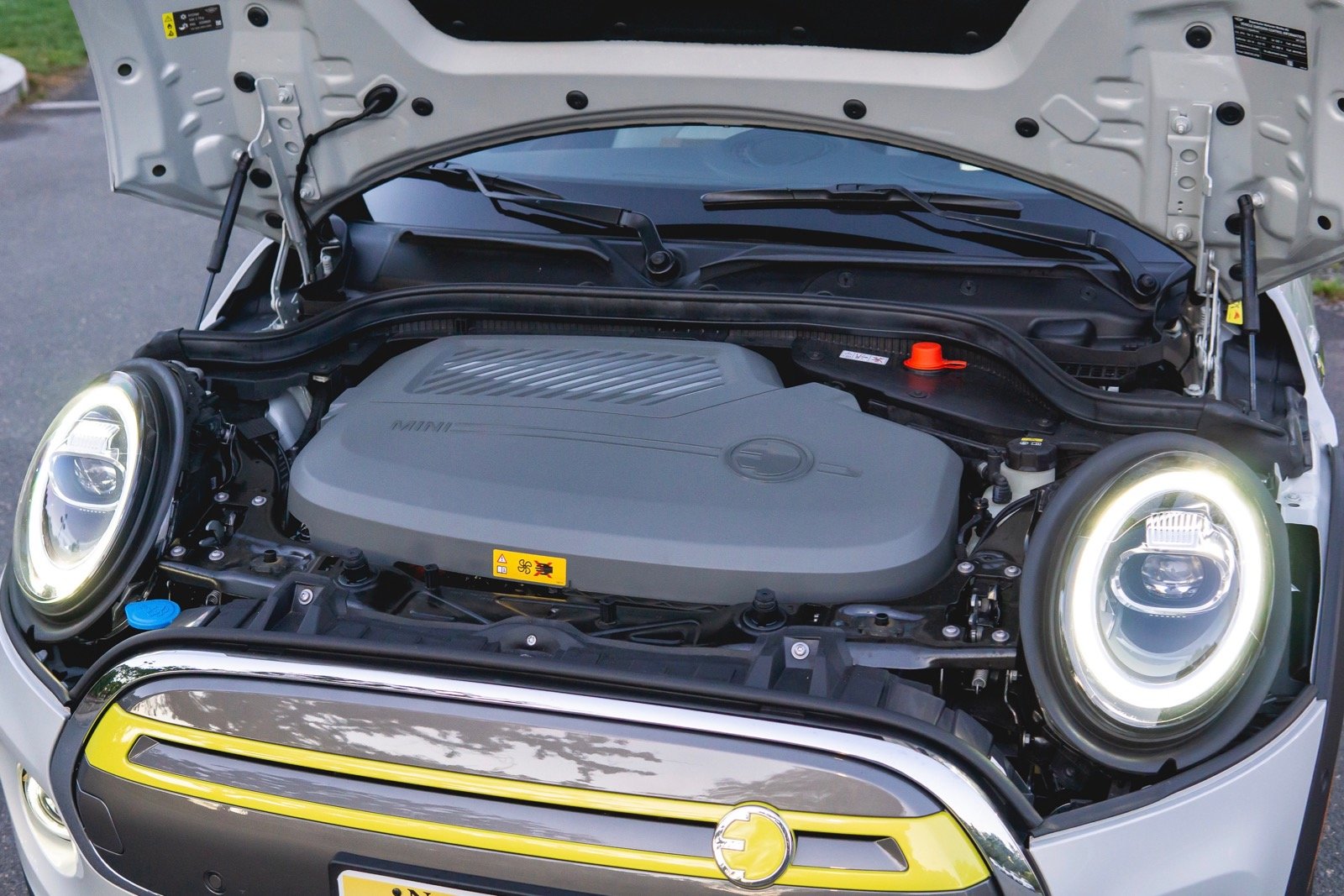 Ever since giving V8 racecars stiff competition on the European Touring Car Championship circuit during the 1960s, MINIs have had a special reputation for performance. Outright speed isn’t the game, these cars are about nimble quickness, carving corners, and navigating traffic with ease. Today, the front-wheel-drive (FWD) Mini Cooper S continues to uphold this reputation, and the John Cooper Works (or JCW) trim dances circles around most cars that, on paper, would appear significantly more impressive.

Performance is also where the MINI Cooper SE excels. The electric motor weighs in at 181 horsepower and 199 pound-feet of torque, fed by a 32.6-kilowatt-hour battery pack. Those figures sit just below the Cooper S’s 2.0-liter turbocharged inline four-cylinder engine, which generates 189 hp and 207 lb-ft. However, because of the immediacy of the electric motor's torque delivery, the SE feels just as quick accelerating from a stop (and it very nearly is). Additionally, the SE sprints ahead of the base Cooper, which employs a 1.5-liter turbo three-cylinder making 134 hp and 162 lb-ft.

The SE also uses regenerative braking to help keep its battery charged. The default system is aggressive and will bring the car to a relatively quick stop without you ever needing to touch the brake pedal. While some drivers will enjoy this golf-cart-style one-pedal driving, others are likely to switch to the less-aggressive setting every time they turn on the car. Even then, the brakes still regenerate energy every time the driver removes their foot from the accelerator.

There is a bit of a weight penalty to the SE trim. Batteries are heavy, so even after replacing the gasoline engine with an electric motor, the SE weighs roughly 300 pounds more than a Cooper S. However, thanks to the SE’s battery back being mounted in a “T” shape beneath the Cooper’s floor, the center of gravity remains low. That helps this little car feel planted in the corners. Add direct steering, limited body roll, and wide-open sight lines, and the SE remains true to the classic MINI driving experience. 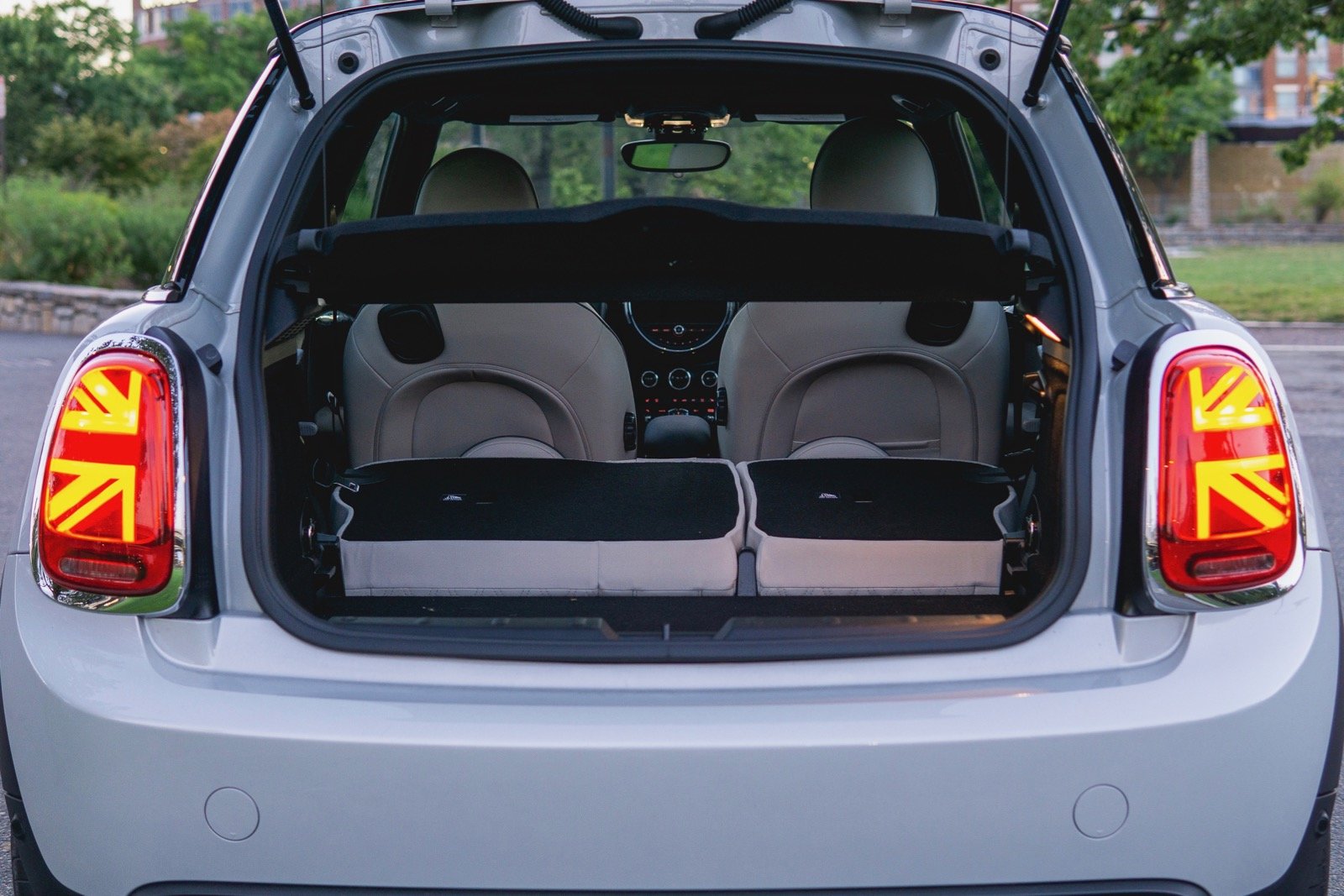 As you’d likely expect, the MINI Cooper hatchback is not the car of choice for carpoolers, soccer moms (or dads), road trips, home-improvement projects, or ski vacations. Front-seat space is good and the big greenhouse means you never feel trapped inside a shoebox—even if it may look like you are from the vantage point of passing cars. Still, the backseat is predictably tiny, and best suited for children. Even then, any kid going through a growth spurt is likely to complain.

Behind the rear seat in a two-door Cooper, you’ll find a scant 8.7 cubic feet of cargo space, which remains unchanged in the SE trim. Pick a four-door Cooper, and cargo space grows to a more competitive 13.1 cubic feet. The Convertible cuts things very short, delivering only 5.7 cubes. Dropping the rear seats in our SE tester provided a maximum of 25.8 cubic feet. For context, that’s still less than half of what you can expect from a Volkswagen Golf with its seats folded. It’s impressive that MINI was able to engineer the SE without cutting any interior space, but it was also pretty necessary. There’s just not that much space available to cut.

Passenger and cargo space aside, the MINI Cooper is a thoughtfully designed car. Two-zone automatic air conditioning is a surprising luxury in a car this size, and the heating system runs off a particularly efficient heat pump to help minimize the draw on the SE’s battery during winter.

The chrome toggle switches on the dashboard are fun to flick, the steering wheel is beautifully ergonomic, and the car’s materials feel top-notch. BMW has invested plenty in the MINI brand, and the impact is noticeable. 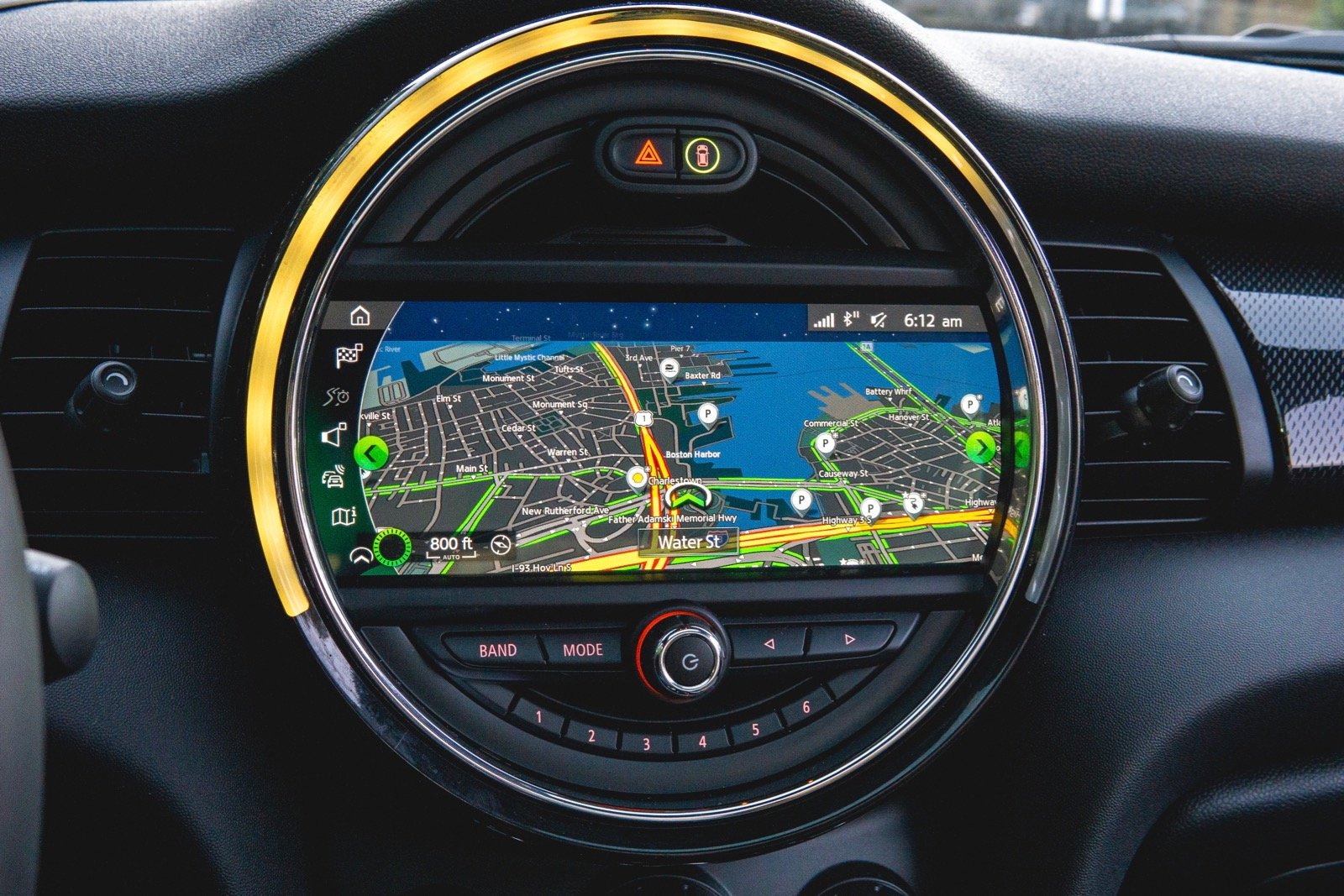 The Cooper SE features a unique “eDrive” driver-information display connected to the steering wheel. If your viewing angle isn’t quite right, be sure to solve it via the seat-adjustment controls because the information display moves up and down with the steering-wheel adjustments. That small detail is an annoyance, but a manageable one.

The eDrive screen can display all sorts of info, including vehicle speed, time, mileage, and remaining charge, and drive mode (Sport, Mid, or Green). But the one most critical to the driver is likely the vehicle’s remaining range. With a 32.6-kilowatt-hour battery, the Cooper SE can travel only 110 miles, according to the EPA’s estimate. That’s not competitive against cars like the Hyundai Kona Electric or Chevy Bolt, but it’s also worth noting that the MINI Cooper was already particularly appealing to urban drivers who may not view 200-mile driving ranges as critically necessary.

The 6.5-inch touchscreen infotainment display lives within a circular housing in the center of the dash. It will catch your eye, but it's not the most efficient use of space. It includes Bluetooth connectivity, navigation, and Apple CarPlay. But MINI offers the Cooper SE in three levels—Signature, Signature Plus, and Iconic—and many shoppers will prefer the 8.8-inch screen that comes standard on the SE Iconic. Also standard on that top-tier SE (which is what we spent our week testing) are a wireless charging pad and a head-up display. 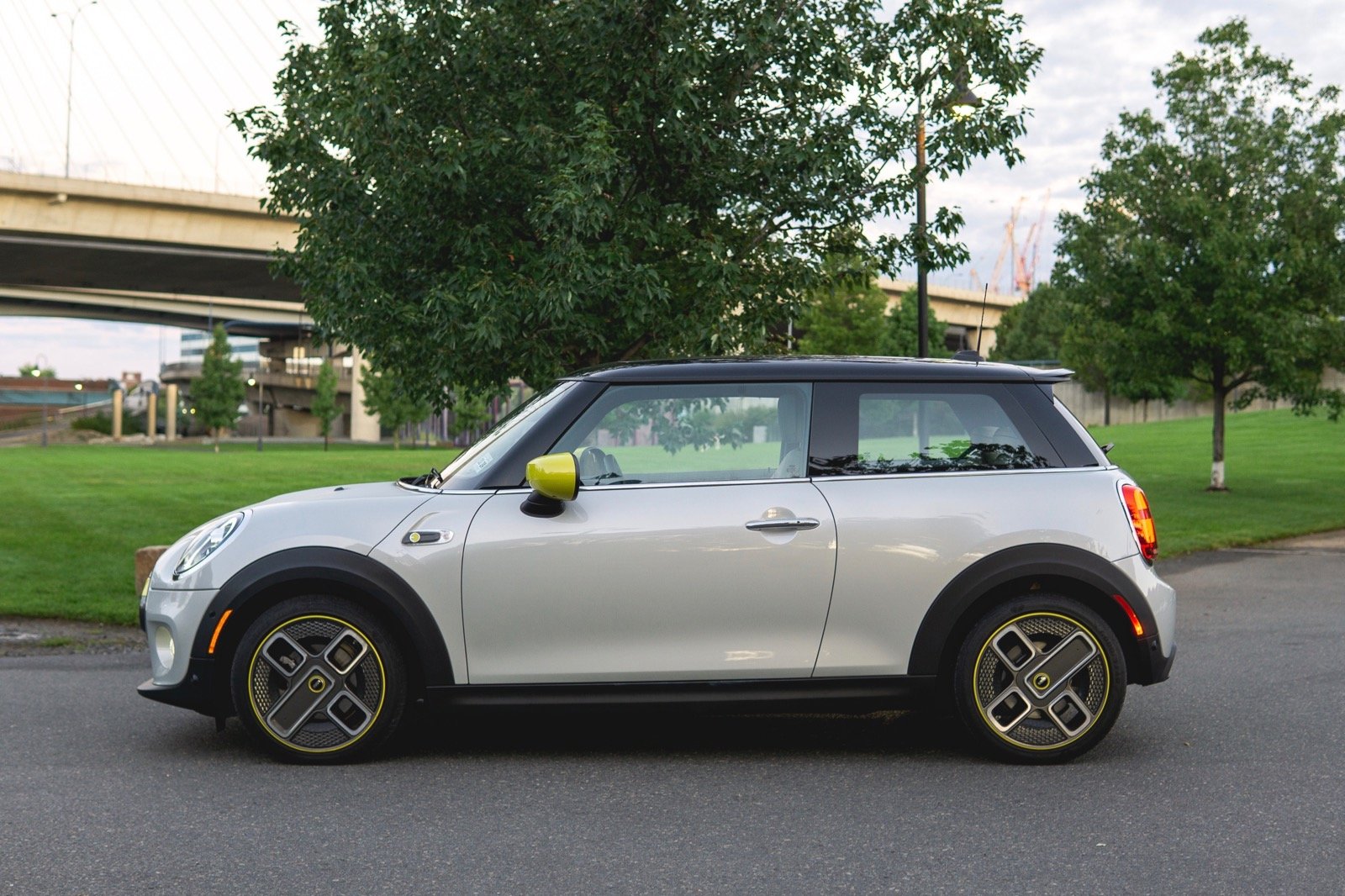 It's hard to imagine a car the size of the MINI Cooper could ever be considered safe, and our test car's lack of advanced safety features didn't help that feeling. Front and rear parking sensors were included with the Iconic package, and the car's rear-view camera system looked sharp, but overall, the MINI Cooper SE lacked a lot of advanced safety tech present in other similarly-priced cars. Forward-collision warning is standard, but automatic emergency braking is unavailable.

The National Highway Traffic Safety Administration (NHTSA) has not rated the MINI Cooper. Thankfully, the Insurance Institute for Highway Safety (IIHS) has. From the IIHS, the 2020 MINI Cooper received top marks, earning "Good" scores in all crash tests.

Even still, it's a good thing the MINI Cooper isn't large enough to seat a growing family. 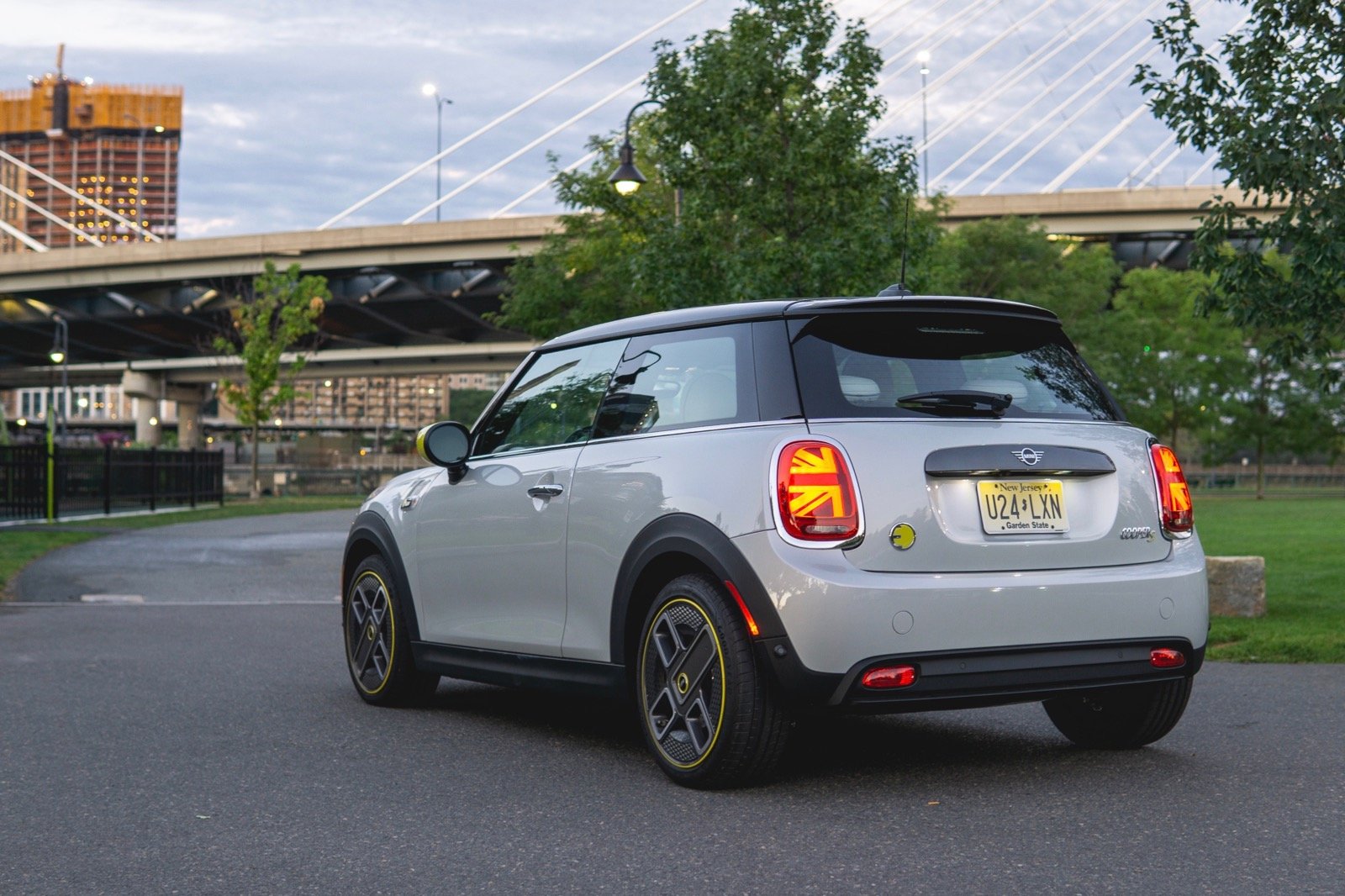 You'd expect a car as small as the MINI Cooper to return enviable fuel economy. Surprisingly, you'd be wrong. The most efficient Cooper is the base hardtop with a 1.5-liter three-cylinder engine. That powertrain returns 28 mpg city, 36 highway, 31 combined. Amp up the engine to the Cooper S's 2.0-liter four-cylinder, and pay a minor penalty; the EPA estimates 26/35/30 for that one. With its 110-mile range, the MINI Cooper SE earns a 108 MPGe rating for combined driving.

Although it's easy to run up the price on a gas-powered MINI Cooper (especially the JCW), the Cooper SE looks like a relative bargain. Our Iconic model had an as-tested price tag of $37,750, but $7,000 of that price was due to the Iconic package. Go for a base-level SE, and the MSRP starts at $29,900. For a new car, let alone a new electric car, that's a compelling price point. Tack on the federal tax incentive of $7,500 (which is still in effect for MINI models), and suddenly you can drive away in a Cooper SE for less than the cost of a Honda Accord.

Plus, there's the appeal of eliminating trips to the gas station, although you'll still need to pay for electricity.

Carlos Heard there is a Mini Copper S with 300+ HP. Is that true?

Have you driven a 2020 MINI Cooper?
Rank This Car

Is 2020 JCW Reliable Vehicle To Purchase

For my recently leased Mini Cooper 2-door hardtop, I know the dealership first filled it with premium gasoline. I looked at the manual and it says mid- range to premium is okay. My parents say that...

Did You Know That In 2 Months Your "system" Can't Get Anything I Ask LOCAL?...

2020 MINI COOPER FROM MODESTO DELIVERED TO MY DOOR ; WORLD PEACE IS PROBABLY MORE EASILY DELIVERED, AND YOUR WEBSITE HAS BEEN USELESS (2months+) . IN MODESTO, CALIFORNIA ; ON McKENRY AVENUE IS A CAR ...