Land Rover builds an SUV that’s as at home on the road as it is on the range. 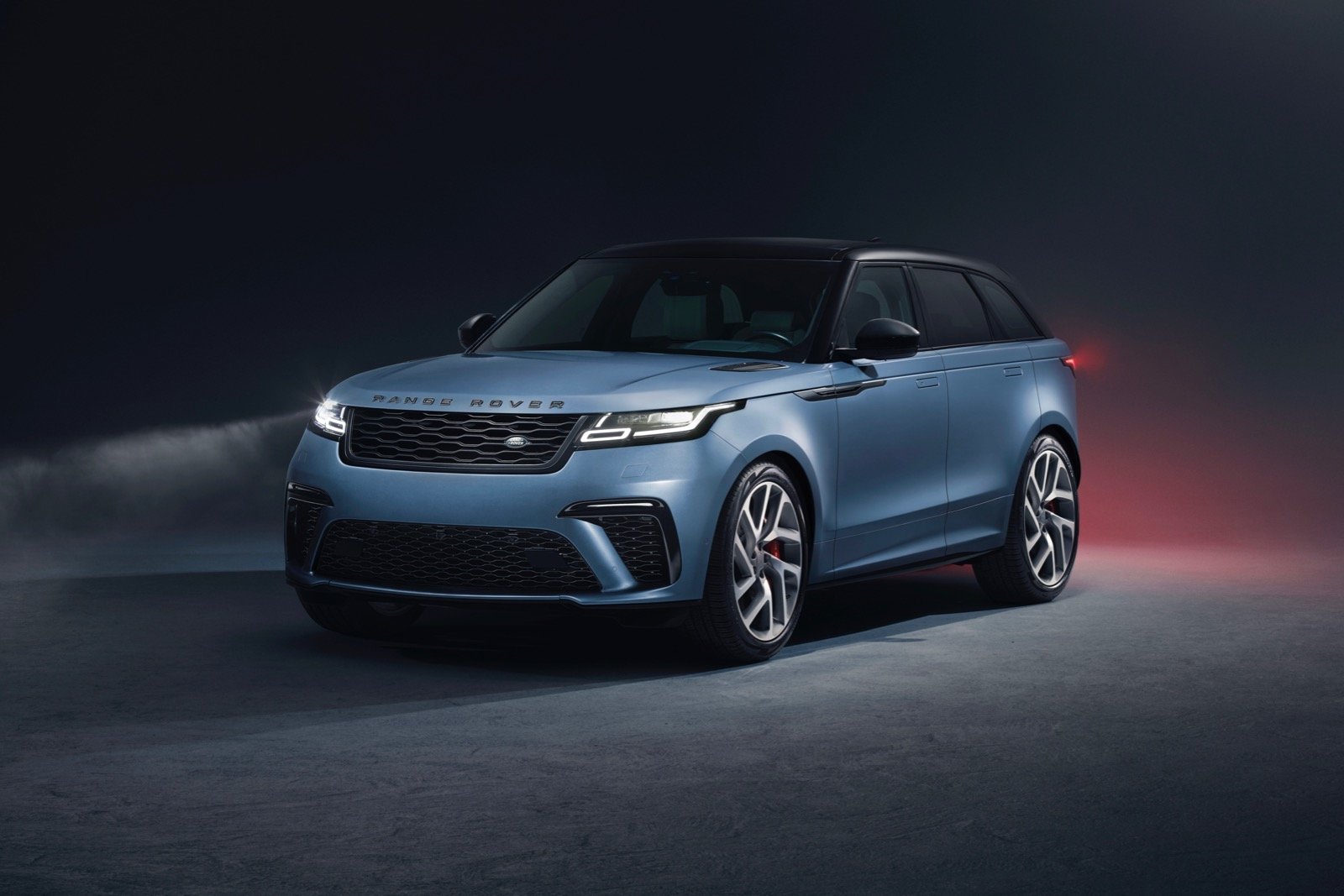 The original Land Rover Range Rover revolutionized the SUV game by combining off-road capability with a modicum of civility. Land Rover is now trying to milk that success by creating a “family” of Range Rover models, including some with more car-like styling and character.

That’s where the Land Rover Range Rover Velar comes in. Launched for the 2018 model year, it sits above the Range Rover Evoque, but below the Range Rover Sport, in size and price (the traditional Range Rover remains the brand’s flagship). Land Rover chose the Velar name as a nod to the original 1969 Range Rover prototypes, which were badged Velar to hide their origin.

The main change for the 2020 model year is the addition of an SVAutobiography Dynamic Edition to the lineup. It’s a one-year-only special that packs a V8 engine instead of the usual V6 or turbo-four. This is the version we tested as, aside from what’s under the hood, it is representative of other Velar models. 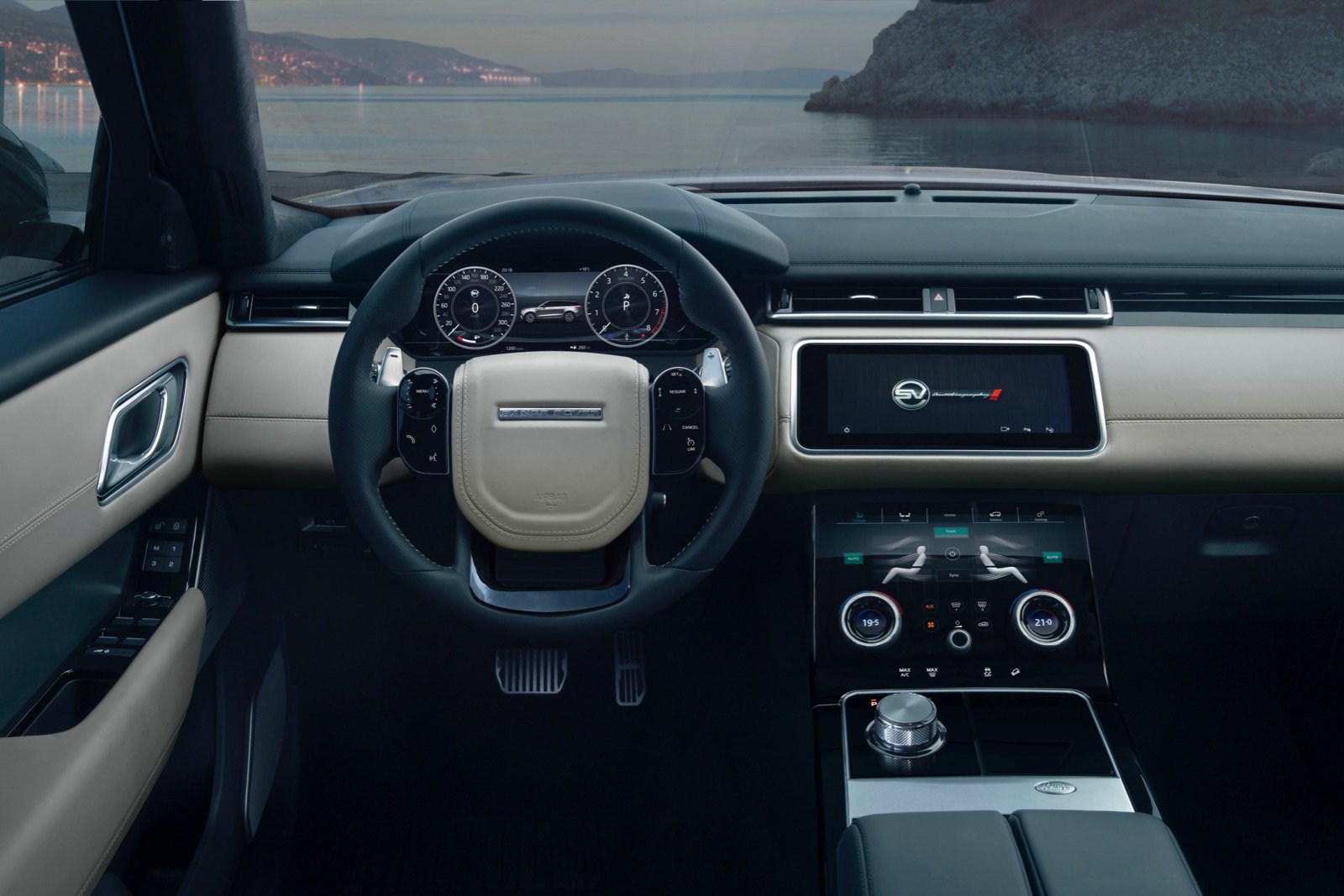 The Range Rover family of SUVs features a spectrum of styling, with the sleek, compact, Evoque on one end, and the big, boxy, Range Rover on the other. Just as it sits toward the middle on size and price, the Velar goes to neither extreme with styling.

The low roof and steeply-raked windshield look like they were created by a custom-car shop, and give the Velar a decidedly different profile from the upright traditional Range Rover. The front end is also rounded, while the rear almost seems to taper in a bit.

However, the Velar is still an SUV. Its broad front end looks just as intimidating in the rearview mirror as any bigger Land Rover, and you still tower over ordinary cars. The short front and rear overhangs are a hallmark of performance cars, but also give the Velar better approach and departure angles for off-roading. Land Rover also quotes 8.1 inches of ground clearance for models with the optional air suspension (lower trim levels get coil springs), and 9.8 inches with the suspension raised to its full off-road height.

The 2020-only SVAutobiogrpahy Dynamic Edition gets some sportier styling touches. The front bumper has bigger air intakes to cool the V8 engine and brakes, while the rear bumper gets quad exhaust tips. The Dynamic Edition also gets standard 21-inch wheels (22-inch wheels are optional), and a tray under the transmission tunnel designed to improve aerodynamic efficiency.

The Velar’s interior would be unrecognizable to anyone hopping out of its 1969 namesake. Like most modern Land Rovers, it’s outfitted in high-quality leather upholstery and metal trim that seems more suited to the concrete jungle than the actual one. As with the Range Rover Sport, Land Rover also gave the Velar a tall, sloping, instrument panel and tall door panels to create a more cockpit-like feel. Unlike most SUVs, you feel more like you are sitting in the Velar, not on top of it. 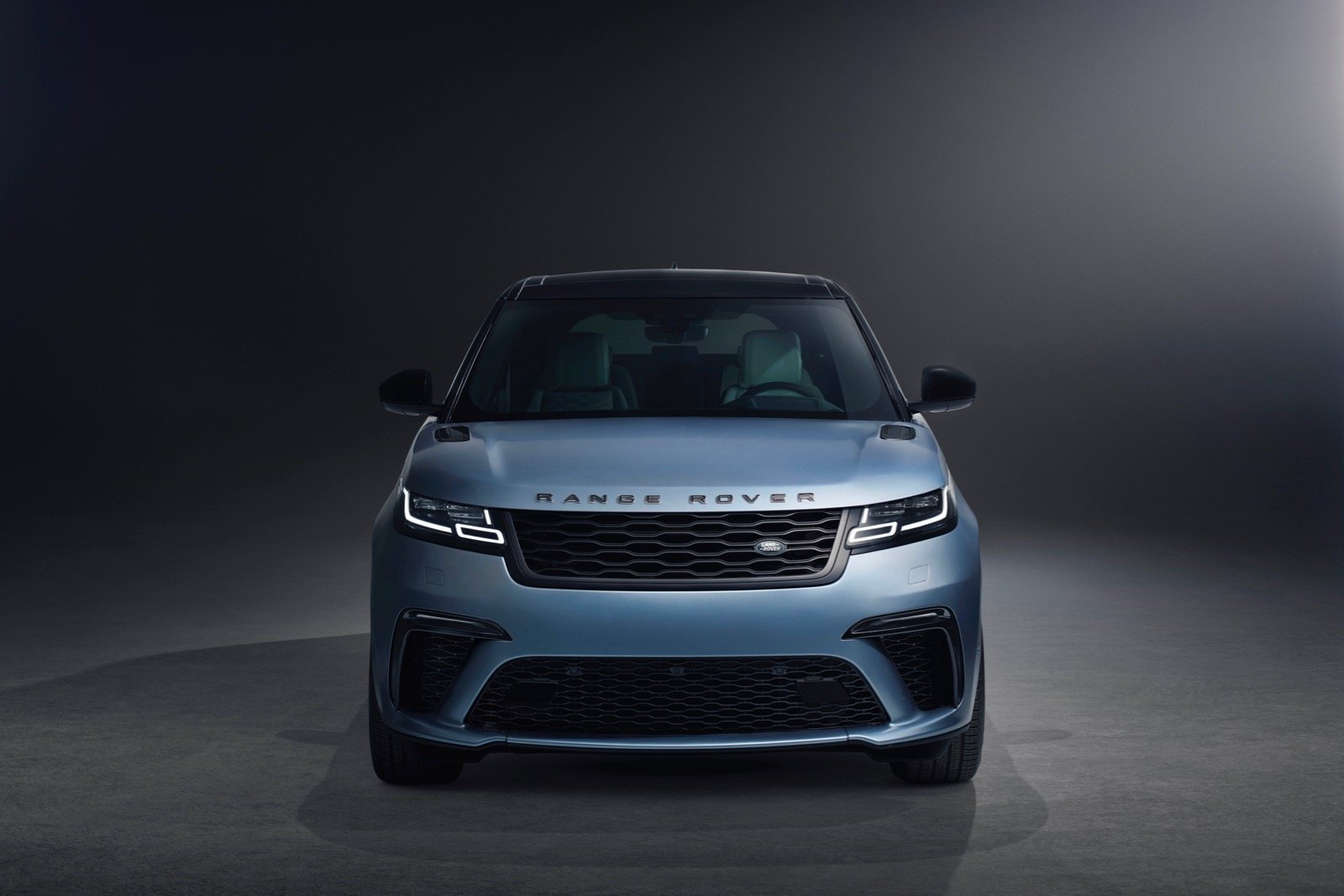 On the road, the Velar has always been more show than go, but that changes for the 2020 model year. The SVAutobiography Dynamic Edition gives the Velar a V8 for the first time, specifically the 5.0-liter supercharged V8 previously seen in other vehicles from Land Rover and sibling brand Jaguar. In the Velar, this engine makes 550 horsepower and 502 pound-feet of torque. It’s coupled to an eight-speed automatic transmission, with standard four-wheel drive.

Land Rover claims the Dynamic Edition will do zero to 60 mph in 4.3 seconds, with a top speed of 177 mph. That’s pretty good for a 4,595-pound SUV, but not a dominant performance. Despite having less power, the BMW X3 M Competition and Mercedes-AMG GLC 63 S are both quicker from zero to 60 mph. The Porsche Macan Turbo matches the Velar’s time but can beat it with the optional Sport Chrono Package.

The Dynamic Edition also gets bigger brakes, retuned four-wheel drive and air-suspension logic, beefed-up drivetrain hardware (to handle the extra power), and an active exhaust system. These changes don’t fully transform the Velar into a performance vehicle, which may be why it gets SVAutobiography badging, rather than the SVR badge Land Rover reserves for its more hardcore performance models.

The Velar’s aluminum platform provides a feeling of solidity and refinement—exactly what you should expect from a luxury vehicle. The Dynamic Edition’s upgrades add plenty of speed to the mix, as well as impressive body control and braking. However, the chassis didn’t feel as sharp as other performance SUVs, and the Velar felt disconcertingly big on tight roads. That made it less fun to hustle through corners, but the V8 served up giggle-inducing noise and acceleration on the straights.

The rest of the Velar powertrain lineup is unchanged for 2020. The base engine remains a 2.0-liter turbocharged inline-four, making 247 hp and 269 lb-ft of torque. Land Rover also offers a 3.0-liter supercharged V6 with 340 hp and 332 lb-ft, or with 380 hp and the same torque output. Like the Dynamic Edition, an eight-speed automatic transmission and four-wheel drive are standard across the board.

Because it’s still a Land Rover, the Velar also gets an arsenal of off-road tech. Land Rover’s Terrain Response system includes drive modes for different surfaces (as well as an Auto mode that lets the car figure things out for itself). All-Terrain Progress Control acts as low-speed off-road cruise control, while hill-descent control will automatically hold a safe speed down steep grades. On the other hand, the Velar only has a single-speed transfer case, meaning it doesn’t have a low range. That, along with the road-focused wheel-and-tire combinations Land Rover offers from the factory, means other models might be a better choice for off-roading. 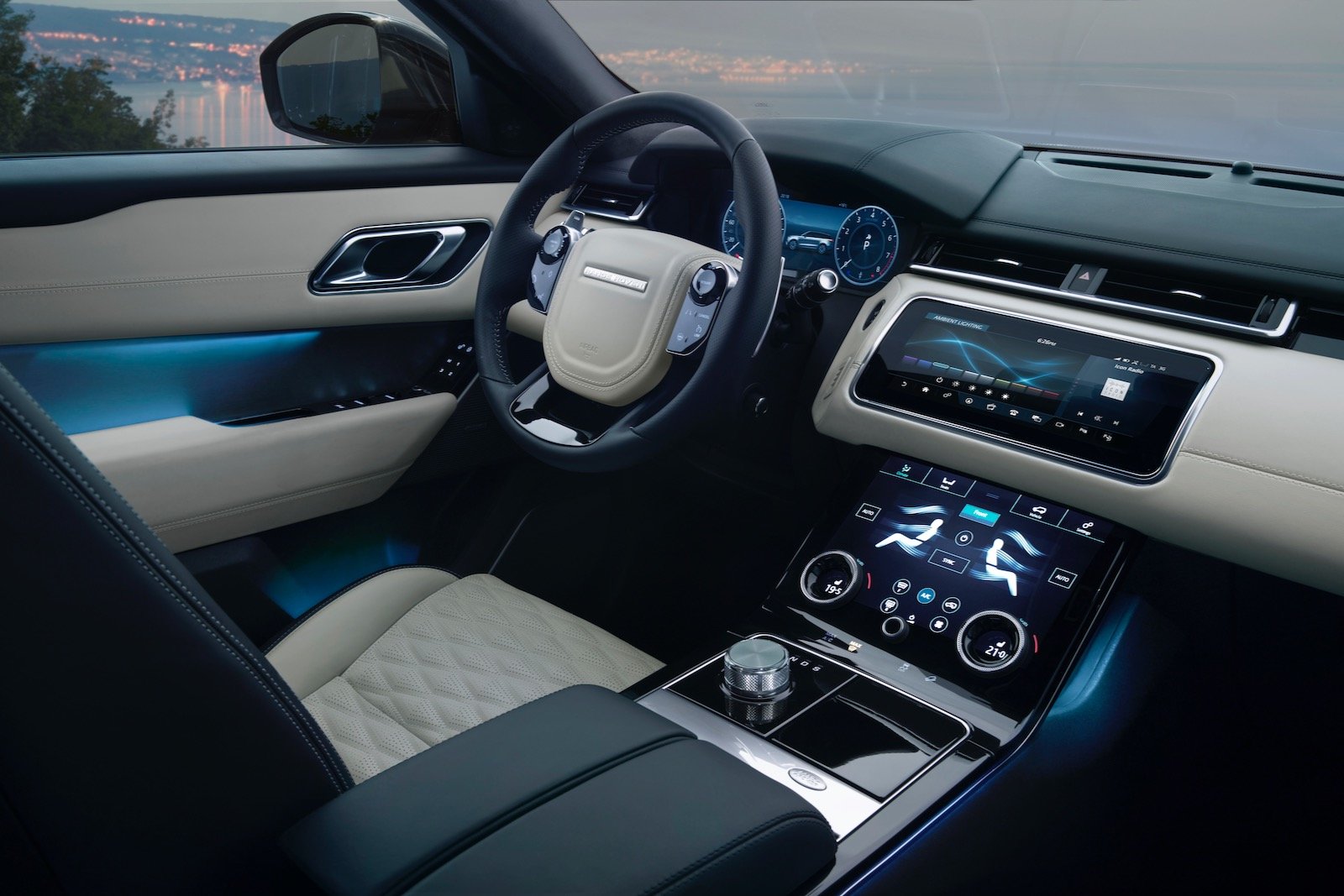 Whatever the opposite of the “Goldilocks Zone” is, that’s where the Velar sits. It feels bigger and more unwieldy on the road than the smaller SUVs, but that doesn’t translate to more interior space. The GLC has more front and rear legroom, while the X3 has more headroom. At 15.7 cubic feet with the rear seats in place, and 48.9 cubic feet with the rear seats folded, cargo space is competitive but not segment-leading. The rear bench seat has a 40/20/40 split-fold.

The Velar’s avant-garde styling may be part of the problem. The chopped roof looks cool from the outside, but it limits headroom and the amount of side glass, creating a claustrophobic feeling inside. That, along with a tall hood, also made seeing out of the Velar difficult. Our test car was equipped with a 360-degree camera system, but the camera angles didn’t provide clear views, and pulling up the 360-degree view on the main touchscreen was far from easy.

Similarly, the cockpit-like front seating area is an interesting change from the normal SUV fare, but it creates a cramped feeling, with limited legroom. The tall center console is easy to reach, at least.

The SVAutobiography Dynamic Edition and the V6 Velar models have a respectable 5,511-pound towing capacity, while the base four-cylinder model is rated to tow 5,291 pounds. A trailer-sway assist feature is standard. 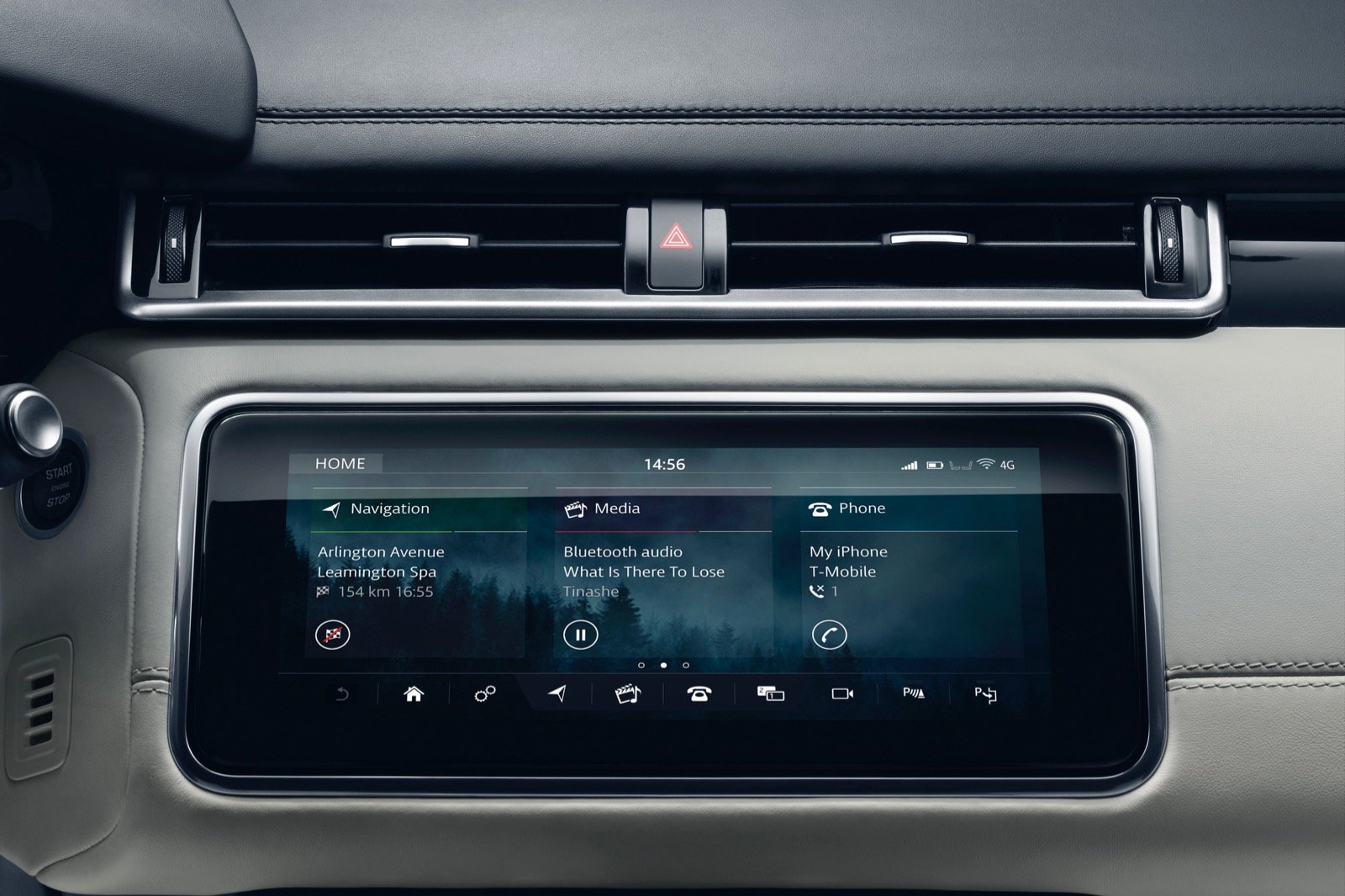 The upper screen (which can tilt up to 30 degrees for better visibility) handles smartphone, navigation, and media functions, while the lower screen handles vehicle settings and climate control. It also gets supplementary knobs that blend in nicely with the screen, and add helpful tactility for functions like adjusting the temperature.

InControl Touch Pro Duo gets a thumbs up for high-quality graphics and menu layout, but a thumbs down for its slow responses. The Pivi Pro system in the 2020 Land Rover Defender, which uses different processors and a new Blackberry QNX operating system, seems to perform better in that area, but it only operates a single, smaller, screen in the Defender.

The tech doesn’t stop there. The Velar also gets a 12.3-inch digital instrument cluster, a head-up display, and capacitive steering-wheel controls. They fit the minimalist look of the cabin but reflect sunlight easily. 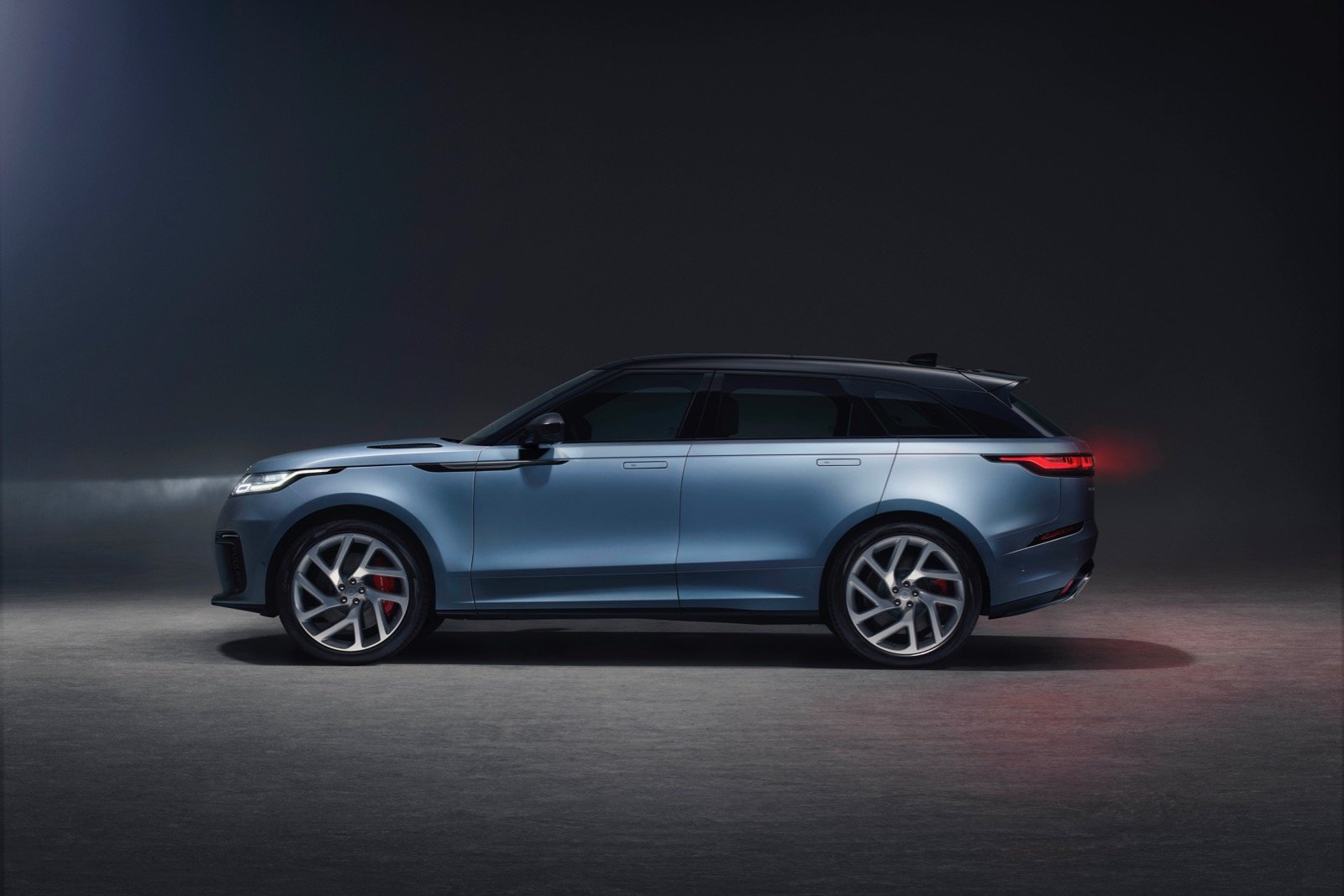 It’s surprising how stingy luxury brands are with standard driver-assist tech when features like adaptive cruise control are standard on cheaper cars from the likes of Honda and Toyota. Land Rover isn’t the only luxury brand to make customers pay extra for common driver aids, but its offerings are also less sophisticated than the competition. For example, Land Rover only offers lane-keep assist, but many other automakers now have systems that can actively steer the car to keep it centered in its lane. 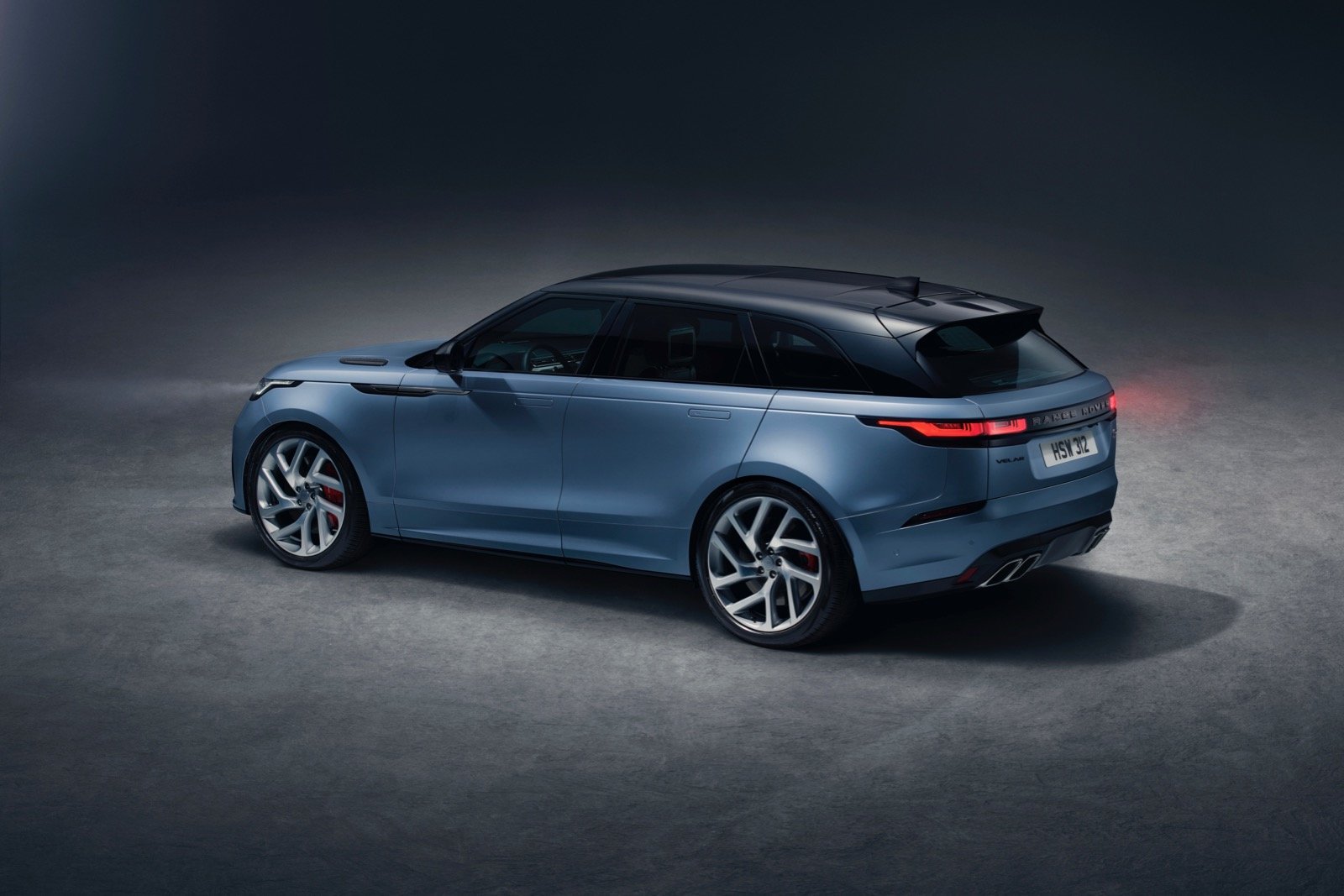 Pricing for the 2020 Land Rover Range Rover Velar ranges from $57,450 for a base four-cylinder model to $91,775 for the V8-powered SVAutobiography Dynamic Edition. Aside from the lack of driver aids, the base model comes fairly well equipped, with features like a power tailgate, the Terrain Response system, and hill-descent control. But even at this price the base model only gets an open rear differential—not ideal for an SUV ostensibly built for off-roading.

Land Rover’s standard four-year, 50,000-mile, limited warranty is comparable to other luxury brands, and the automaker includes a six-year corrosion/perforation warranty with unlimited mileage as well.

Middling fuel economy and a high MSRP are typical of luxury SUVs, but the Velar also suffers from a bit of an existential crisis. There are plenty of other luxury vehicles in this price range, many offering more interior space or better on-road driving dynamics. The Velar is one of the few to offer genuine off-road capability, but it’s unlikely that most owners will use it.

At least the Range Rover Velar SVAutobiography Dynamic Edition gets a V8 engine, which transforms the Velar into a swaggering, high-riding, muscle car. But that V8 comes at a significant price premium and, while Land Rover hasn’t set a firm production cap, it only expects to make 500 of these special editions.

What's your take on the 2020 Land Rover Range Rover Velar?

GuruSK4T8 I would love one, but I will never be able to afford one.I am so poor, I cannot even afford to pay attention.

Have you driven a 2020 Land Rover Range Rover Velar?
Rank This Car

How Tpo Pay In Cash?

Can you deliver asap? Been tryingn to be real.

Do You Lease Vehicles?